Mawlynnong Travel GuideMawlynnong TripsHiking To Meghalaya'S Double Decker Living Root Bridge. What To See And Do.

Hiking to Meghalaya's double decker living root bridge. What to see and do. 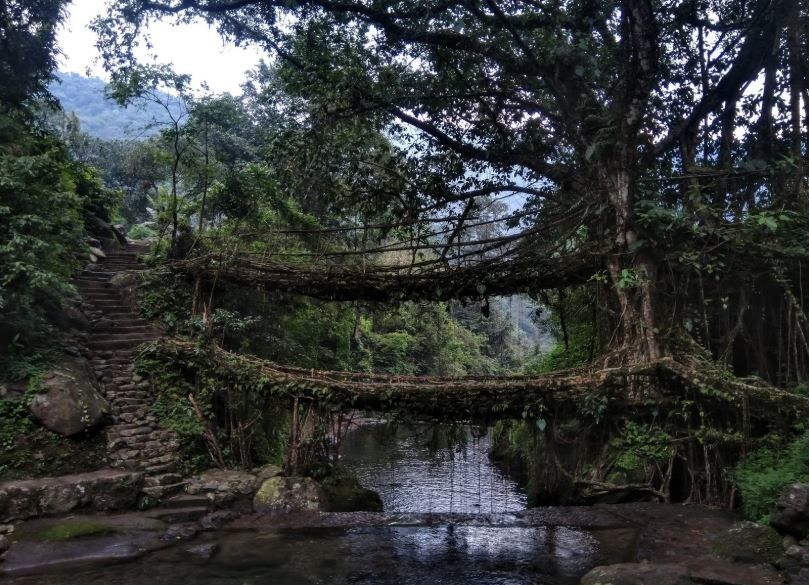 The famous double decker living root bridge of Nongriat, Meghalaya is probably among the finest examples of staying in tune with nature. Built by tying up the roots of two big trees on each side of the river's bank with vines more than a century ago, this bridge, like its more famous counterpart in Mawlynnong, is an ever evolving, alive bridge that just continues to become stronger and more beautiful with time.

However, unlike the root bridge of Mawlynnong, getting to this bridge is not easy. You need to do a long, steep hike just to get there and repeat that all over again - and all uphill while coming back. Following is a description of how it is like doing this hike. If you find this interesting, there are a few more tips about how to do this hike, when to do it and where to stay at the end of the post.

A 3,500 stairs downhill journey from Tyrna

The starting point for the hike to the double decker root bridge is Tyrna, a quaint little village about 12.5 kilometers from Cherrapunjee. From Tyrna it is all downhill. Along with crossing the ancient stone stairs it involves crossing other living root bridges as well as old suspension bridges and wire bridges through an exquisitely beautiful, sub-tropical forest that covers these mountains.

The board at Tyrna simply says that you would need to climb down 3,500 steps and 2,500 feet to reach the double decker root bridge and Nongriat village. Going by my experience in the mountains, I could tell that it would be a pretty steep descent. However, it did start gently enough.

That was for a brief while though. Soon it changed and the stairs started to plunge into steep slopes. The forest clung to the ancient steps and from certain points you could see their sudden, often awe inspiring drops.

From certain places the Nongriat village could be seen far below; in the lap of the hills, shadowed and cradled by deep, throbbing, sub-tropical forest greens.

After the initial breeze through the steps, the sudden drop began and with that an enormous, excruciating humidity started to soak out the energy. This was not at a very high altitude and the forests here were more tropical in nature than Himalayan. On top of that, I was doing this hike just before the monsoons, when the humidity was at its peak. The jungle clung on from both sides and sucked out the last remaining bits of fluid from the body. No amount of water could replenish that.

However, once you get started on such trails, you just don't stop.

More root bridges on the way.

About half-way down, there was another small village which was home to one of the most stunning root bridges, possibly the most stunning that I have seen. More than a 100 years old, this root bridge looked mighty and awe inspiring. It went high above a beautiful stream and on the other side of the stream, opened in front of a small bat cave - a small, triangular opening created by two huge, adjoining, moss-laden rocks. Inside it was a damp darkness and if looked closely, there were bats clinging to the roof of that arched opening.

There was another new root bridge that was being laid at a small distance off the main and mighty one. It was not for use yet. Instead, it gave a glimpse to the birth of a living root bridge.

After that, the stairs began again. Initially, this part of the trail was a much gentler walk through the throbbing tropical greens that clung to the stairway from both the sides.

By this time, the jungle started to throng in with a different intensity and I started noticing certain things that I did not before. Such as, the presence of multiple shades and layers of green at just about everywhere.

Also the strange beauty of life that throbbed in these forests.

Or the cloak of mist that made the mountains a land of mystery and dream.

After a while, as I reached closer to the stream, the stairs started opening into various types of bridges. First came the rusty wire bridges and the suspension bridges. They were any day more dangerous than the living root bridges. The moment you put a foot on them, the would start swinging. Not the greatest prospect when you see a mountain stream right below your feet which tends to get wilder by the minute!

After crossing those and after walking along a combination of a few more small root bridges, steps and just jungle trails, I reached the Nongriat village, the home to the double decker root bridge. The unassuming, but welcoming village guesthouse, less than 100 meters from the living root bridge was to be my shelter for the night. By this time I was completely drenched in sweat and just needed to relax a bit. And this was just the place for that.

Finally, the double decker living root bridge and the waterfall beside it.

After a few moments of settling down here I went to see the double decker root bridge. Initially, after all these travails, it did not seem too significant. In fact it seemed much smaller and less impressive when compared to some of the bridges that I had already crossed. But this was all because reaching here in an extraordinarily humid day had taken its toll upon me. I just needed to rest a bit here and let the surroundings sink in.

As the exhaustion wore off the beauty of the place started to dawn on me. The surrounding started to come alive, with the sound of the beautiful waterfall right beside and with the approaching evening, the living root bridge started to look more and mysterious, beautiful and possibly alive!

The how, where, what and when of the hike.

After this hike I was asked a number of questions by my friends. Just thought jotting them down here might help the community.

How to do this hike? Stay fit and carry some water along with you. You can also carry some dry snacks to refill yourself on the way. However, whatever you are carrying, refrain from littering the place.

How long will it take? That depends on how you plan to do this. You can take multiple stops on the way to enjoy the view and the experience or you can just go non-stop. Either way, your total walking time to reach the village should not exceed 2 hours, since though long, it is all downhill. Coming back, however, might take a bit longer as it would be steep and uphill for all of the 3,500 steps.

What is the best time of the year to do this hike? That depends on your personal choice. Avoid peak monsoon as the place will be inaccessible then. Most hikers prefer winter as that is the most comfortable season for hiking. However, going here after the monsoon will give make you see the jungles at their greenest and most vibrant, even though it might be a bit tricky with the trails becoming particularly slippery.

Do I need any special gears? Probably no. Still, you can just rent or buy a bamboo stick at the Tyrna village in case you feel like using some extra support for your legs. Most of the hikers do that.

Do I need any guidance? Just following the trail should be enough. It is pretty straight forward. However, if you want, you can take the assistance of the village guides at Tyrna. They are extremely friendly people and can give you great company.

Can I do the hike in one day? Yes. However, it is better to spend a night in the Nongriat village, just for the experience.

Where can I stay? There are homestays on both sides of the double decker root bridge where you can put up.