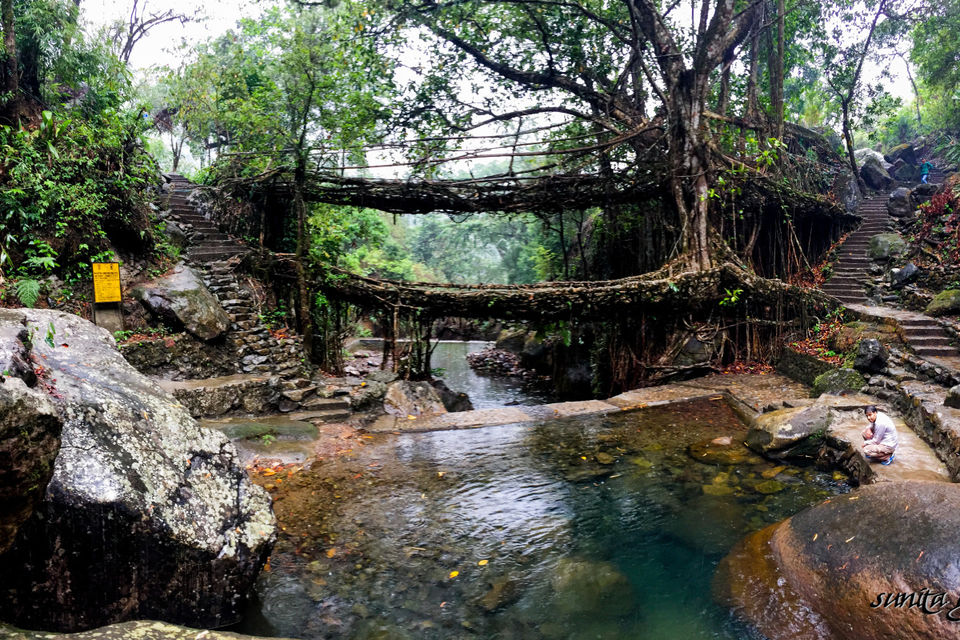 View of Nongriat village (Mid of the mountain on t

A girl treks to the top everyday to go to school 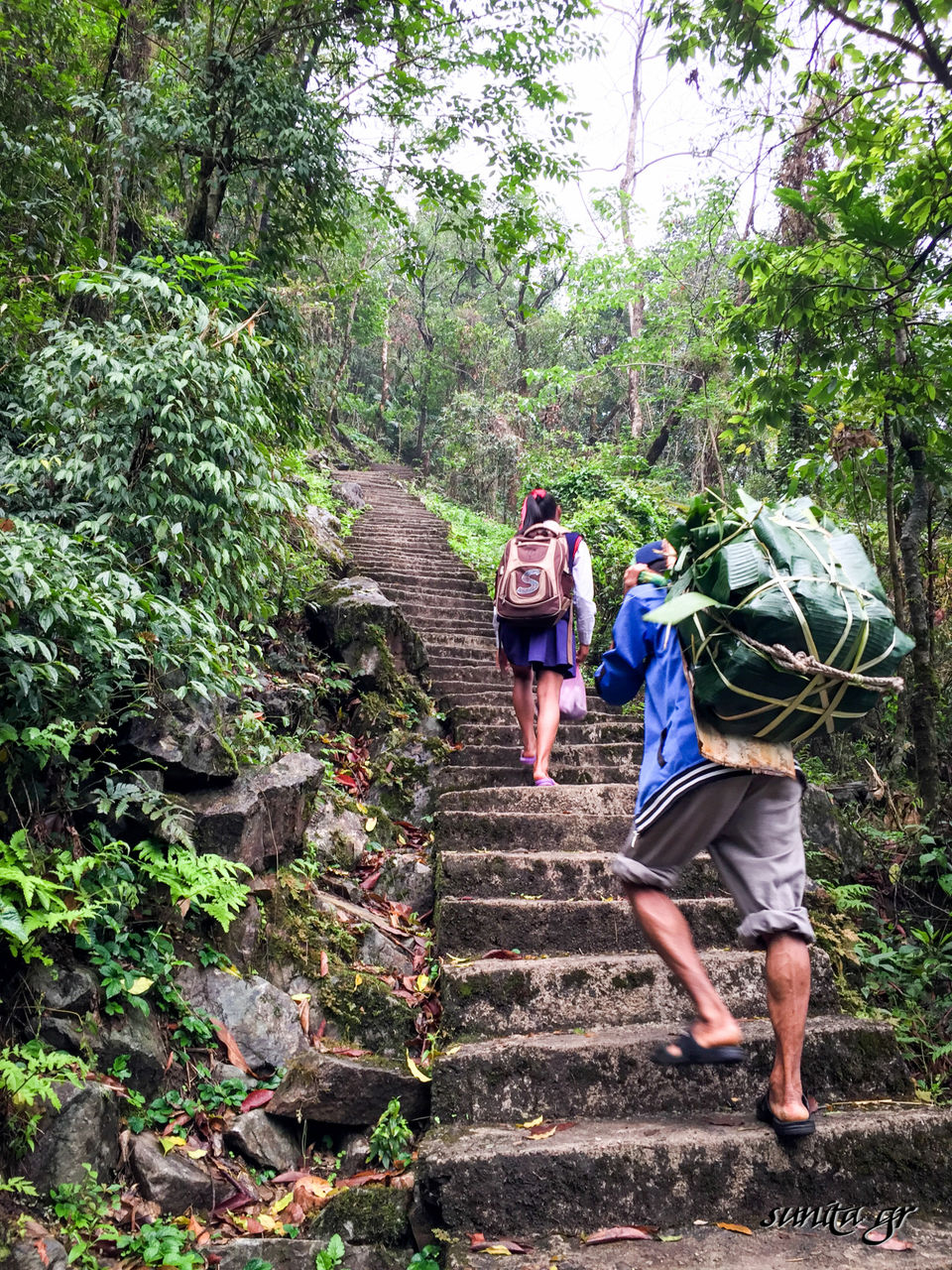 A villager carries his produce to the top 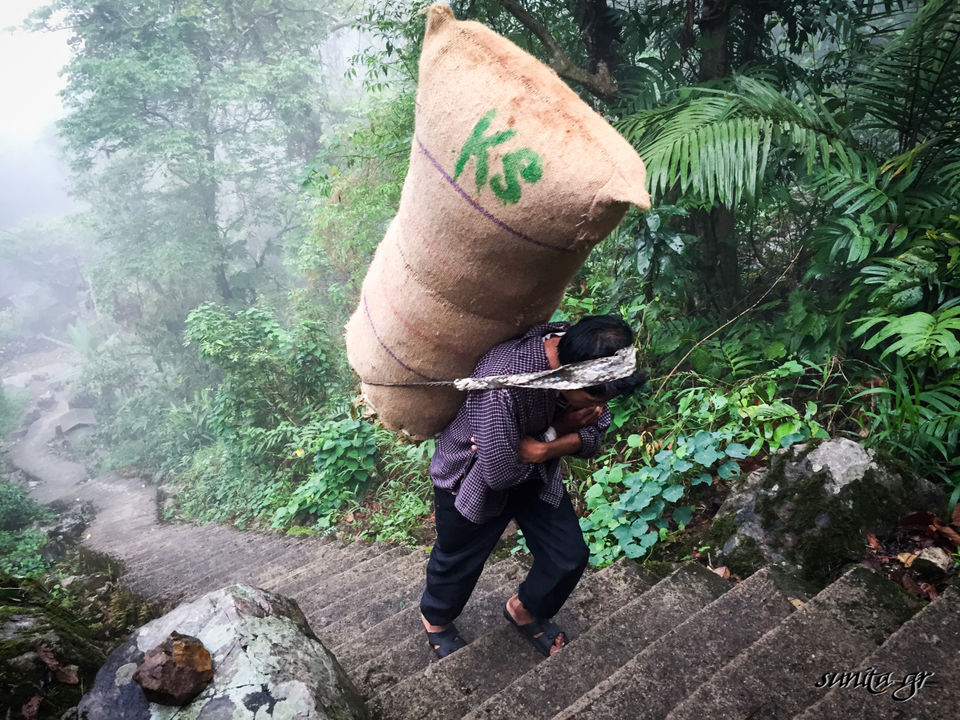 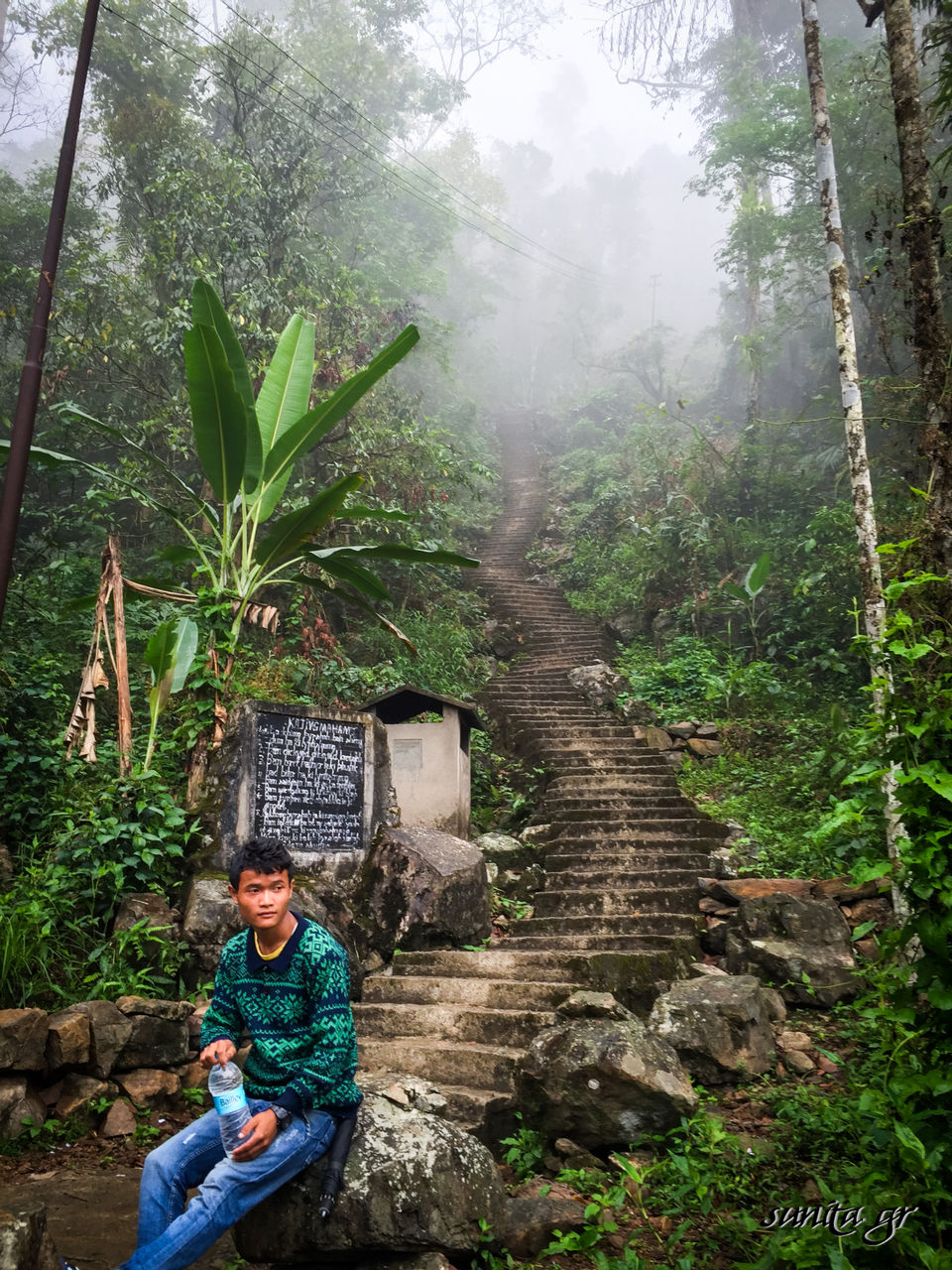 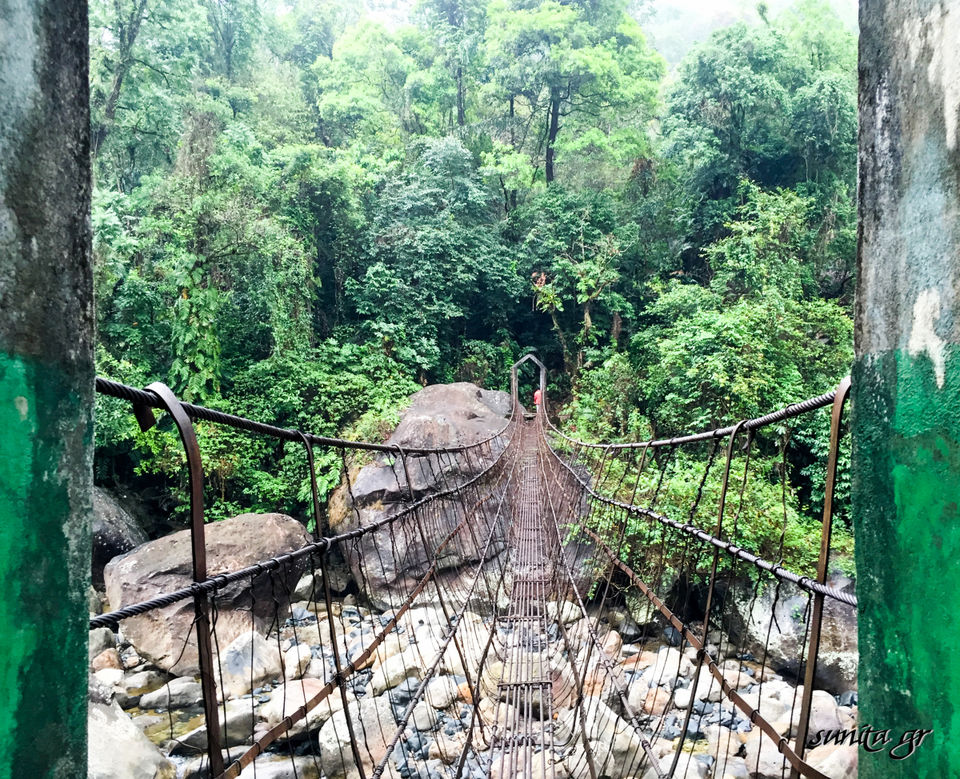 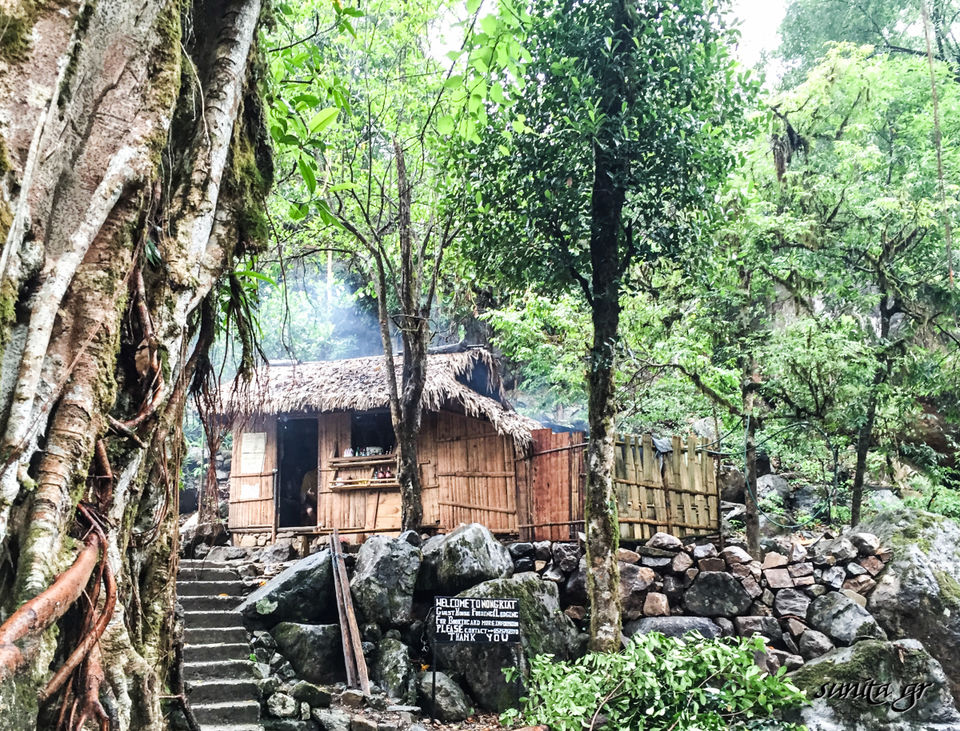 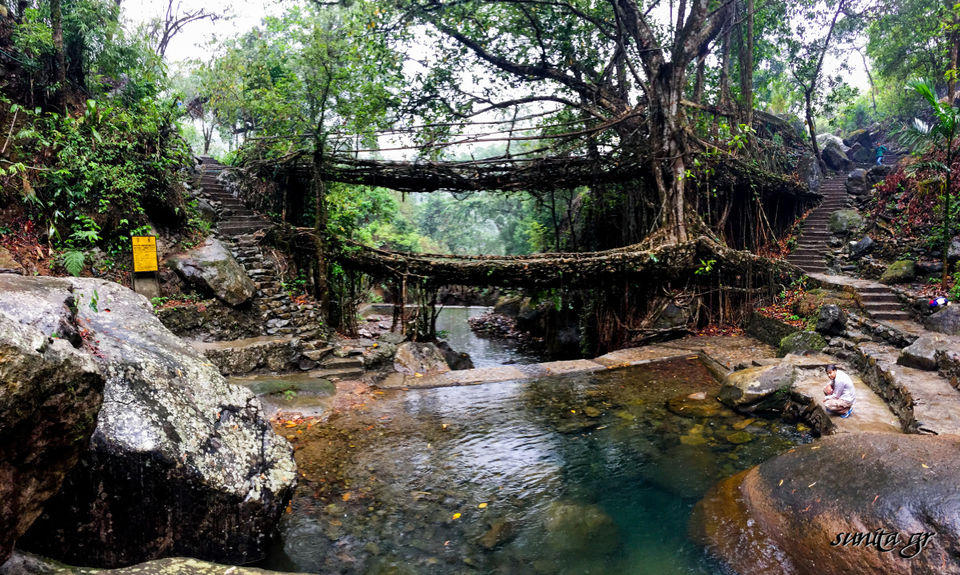 “350 seediyan hai. Pehle neeche phir upar jaati hai, phir village aur bridge aata hai. Ek baar main gaya tha. Uske baad 2-3 din tak bimaar padh gaya. Seedhiyon se nafrat si ho gayi this  (It is 350 odd stairs that go down and then up to the village and the bridge. I did it once and after that, I fell in bed for 2-3 days. I hated the sight of stairs),” muttered Tapan, our driver in Cherrapunjee, once the rainiest place on this earth. From his sombre voice, it was evident that this was his attempt to discourage me from doing the trek to the village, based on his bad experience. The trek to the Living Root Bridge of the Nongriat village near Cherrapunjee is not for the weak-kneed or the faint hearted as I was soon about to find out.

The living root bridges of Nongriat village are one of the manmade wonders, dating back many centuries. The aerial roots of Banyan tree on opposite sides of the river are continuously twisted, given direction and woven together, till it can be shaped and strengthened into a sturdy bridge. This is the only means for the villagers to cross the raging water streams to reach the other side. There are two living root bridges in Nongriat, a single deck bridge, and a double decker bridge.

Dismissing Tapan’s foreboding warning of things to come, I decided to embark upon the trek to the village the next morning. After all, it was just 350 steps!  What was he talking about! It couldn’t be that bad after all. After reaching the Tyrna village, the starting point on top of the mountain, I found a guide named Phil. Phil was a smiling young lad, right out of school, who was killing time and making some pocket money by offering to guide in the few months he had before he had to join college. The board at Tyrna village indicated a 3km hike to the Nongriat village and some mild alarm bells were set off in my head. 3km and 350 steps didn’t quite add up!

The path to the village is a cemented staircase in the middle of the thick jungle; that first reaches the bottom of the valley and then after crossing the river, another flight of stairs upwards lands one at the village. Very casually, we walked down the flight of stairs, enjoying the beauty around. After about ½ hr of the walk down the stairs, with knees beginning to become wobbly, I figured we must have actually done the double of 350 steps that my driver warned me about. I asked Phil, how many steps were actually there? To my shock, he said 3500! Clearly Tapan didn’t count properly! Well, shoot me, I said. Phil smiled helplessly. How was I even going to get through it, with my knees already wobbling! Walking down was the easy part I figured. Walking up the steep and narrow flight of stairs could be a death wish! Never mind, I would crawl up. But it was a problem for later.

So we continued. The breathtaking hike through the forest was well worth it. The jungle was enveloped with clouds and the morning dew made everything look fresh and beautiful.  We saw a few villagers coming up the stairs. One was a little girl in a school dress, not more than 7-8 years, who was walking up the stairs to go to school! It was very hard to imagine that the young kids did this every day! Just for basic things like going to school and getting a good education!  Soon, we spotted two more villagers who were transporting local produce in heavy sacks strapped to their backs. To see & experience the hardships that the villagers faced day in and day out, was extremely heart wrenching. What made them go up and down the stairs every day? Why couldn’t government make more efforts for them to connect easily with the world outside, like making ropeway trolleys? But observing them gave me the impetus to complete rest of the trek without a whimper.

After the steep flight of stairs down, we arrived at a small village, from where the single root bridge can be accessed. We progressed ahead, arriving at a wobbly iron bridge at the bottom of the valley. Crossing it for the first time, gave me a good scare. While Phil languorously strolled ahead, with the wind in his hair and spring in his step, here I was, sweating by litres, clutching the swaying bridge for my dear life and crawling ahead. I did not want to look down at the water stream 30 ft below, for I would have succumbed to my fear of heights and gotten fully paralysed. Miraculously, I survived, only to find another higher and longer iron bridge after a short walk ahead. History repeated itself as this. Also, I survived. Phew!

After a short walk up on another flight of stairs, we arrived at Nongriat village. Nestled in the middle of the jungle was this quaint and clean village, freshly sprayed clean with the shower that had just started. The village is fully off the grid and hence has become a hotspot for trekkers who want to be engulfed by nature. There were a few homestays I found on the way where trekkers especially from abroad were relaxing.  It is commendable what the villagers have done to encourage responsible tourism while protecting nature. They have contributed towards a community guesthouse for trekkers, have made large dustbins for collecting waste, etc. They respect nature by keeping the village clean. It is a harmonious co-existence of villagers, nature & tourists. A short walk from the village is the Living Root Bridge. The first view of the root bridge mesmerised me and made the arduous trek fully worth every drop of sweat and every ache in my body. It felt as though I had arrived in paradise. With chirping birds that began to emerge after the downpour, the double-decker bridge in the middle of a thick jungle, set right across a rumbling waterfall and over a gentle water stream, was a sight to behold. The double bridge was a masterpiece in itself, with intertwined roots made sturdy over centuries. The villagers are working on creating a third deck, by twisting and shaping the roots. Perhaps in a half a century, it would be fully made. The water was so clear, cool and fresh and it was enticing me for relaxing dip. I hadn’t got a change of clothes, so I just made do by sitting with my feet swaying in the water and periodically dipping my face in it. Mesmerized with the bountiful greenery around me, I thoroughly enjoyed the beauty of the place amidst the slight drizzle.

Ahh, I so didn’t want to go back. It is quite natural to feel like this in the middle of nature, completely off the grid, where one can unburden the stresses of daily life and try to find a rhythm between self & nature. I bumped into a foreigner who completely endorsed my sentiments. He, like me, had come for a day trek and decided to stay back after feeling enchanted by this place. My resort in Sohra doesn’t know where I am, he said very coolly. I wished I could have done the same. But I am a woman with proper plans and it would mean the rest of my trip would have gone for a toss. A small tea shop right next to the bridge was just perfect to have a cup of hot tea and steaming Maggi before I reluctantly winded my way up.

The rains had cleared up the clouds on the way up, and I could see the spectacular landscape of the valley, gasping in awe of how much we had walked. Slowly and steadily, I made my way up, not knowing what was sweat and what was rain drops on me. This time, I had counted. It was 3500 stairs (app 5000 steps ) from the bridge back to the top which meant we had done 7000 stairs and total 10000 steps up and down. But it didn’t hurt one bit, for my body and mind had found a gentle rhythm to propel me further. I met an aghast Tapan at the top, for I had completed the trek in 4.5 hours which is quite an average time clocked for the trek. Thank god you didn’t tell me it will be a 7000 stairs trek,  I would not have ever done it, I told him. The loss would have been only mine!

And yes, my body revolted at the sight of stairs for almost a week after that.

Tyrna village, the starting point of the trek is a ½ hr drive away from Cherrapunjee. From there it will take a relaxed 1.5 hr walk down to the Nongriat Village and then a two hr walk up. Budget 4-5 hours including stops.

If you want to do a day trek, stay in one of the Hotels in Cherrapunjee. However, it is recommended to stay at Nongriat village for a night or two to thoroughly experience the place.  Serene homestay is a good option. Expect nothing fancy.

Carry swimming trunks and a towel if you want to dip into the stream. If you plan to stay,  walk around on other trails to nearby villages and take a dip in many waterfalls along the way. Also, trek up for an hour to Rainbow Falls, which is supposedly very scenic and highly recommended by all trekkers and locals alike. Chances of spotting an actual rainbow over the waterfalls are very high. It rains abruptly making the stairs slippery, so wear trekking boots and waterproof your camera and phones. Travel light.

This trip was originally published on THE VISA STAMP COLLECTOR: https://thevisastampcollector.wordpress.com/