For the uninitiated, Milan brings the names of major fashion houses and runway models to mind, but only upon visiting this city will you realize that there is a lot more to it than just haute couture. The external facade might be cold, indifferent and even pretentious for that matter, but on the inside, this metropolis is brimming with history and artistic achievements. It has all the characteristics of a big city with bright lights: the locals are always in a hurry, traffic jams can often hold you back, the nights are as lively as they could get and there is a lot of money that needs to be shelled out. Yet, a glimpse of the mighty Duomo, of Leonardo Da Vinci's masterpiece 'The Last Supper' and the presence of heritage structures among high-rises is enough of a redeeming factor. Additionally, do not blame yourself if the many mannequins and sale signs on display lure you inside showrooms and leave you short of a few hundred Euros, Milan can do that to the most restrained of people.

It was here that Benito Mussolini founded his fascist party and after a tumultuous period that history is proof of, Milan has worked hard to establish itself in the global market, so much so that it is now playing host to one of the biggest Expos in the world. Materialism, according to the Milanese, is not necessarily a bad thing; in fact they are terribly proud of it. However, the natives do not care if you are severely underdressed by their standards or if you choose to eat a pizza with your hands instead of fine silverware. The sharp, structured dress and expensive looking heels that the lady beside you seems to be flaunting might just have been purchased from one of the many flea markets in the city; you never know.

The financial capital of Italy, which also serves as a capital of the Lombardy region, Milan is like a fancier version of Mumbai sans the sea of course. It is well connected by flights to and from major cities across the world and the domestic train and bus connections are equally good. You cannot flag taxis in Milan, the only option is to call them and the meter starts to run from the point where your call has been received, therefore taking the metro or hopping on to one of the trams is a better and cheaper way of getting around the city. It must also be noted that all Italian cities and towns require tourists to pay a tax and for Milan, it is 3 Euros if you are staying in a 3-star hotel and increases with the number of stars. All in all, Milano is a very different experience; it is no London no Paris or New York City and certainly not Rome, yet it is an amalgamation of them all. It is one place that will coerce you to taste luxury and will keep you grounded at the same time.

If there is one cathedral in the word that can proudly boast of having the most intricate facade and an impressive interior, it is the Duomo. The pristine white gothic structure stands out in a city otherwise abounding in modern galleries and fashion outlets. The fifth largest church on this planet, it also houses the biggest stained glass window in the Christian world. There probably is a reason why it took over 600 years to complete this marvel. Embellished with 135 spires and 3200 magnificent statues with a gilded copper Madonna adorning the main spire, the Duomo draws thousands of tourists every day some of whom spend a good amount of time lost in the breath-taking views of the city and the Alps from the roof terraces. When in Milan, do not miss the Duomo, you will regret it. Getting there: Buses, trams and the metro connect all major spots in and around Milan and the tickets come for nominal amounts. The closest station to the cathedral is 'Duomo' (90 metres) which serves Line 1 and 3 of the Milan metro and one can buy tickets at the station itself for 1.5 Euros. Tickets for the Duomo can be bought right outside the cathedral and they come for about 5 Euros. The prices increase if you want to see the roof terraces - 7 Euros if you choose the stairs and 12 if you take the lift. There might be long queues but are not much of a deterrent because they move pretty fast. Entry is free on Sundays but one still has to buy tickets for the spired roof terraces. Remember to dress 'appropriately' and do not carry any glass bottles in your bags or basically anything that can be used as a weapon because the folks at the security check are extremely paranoid. 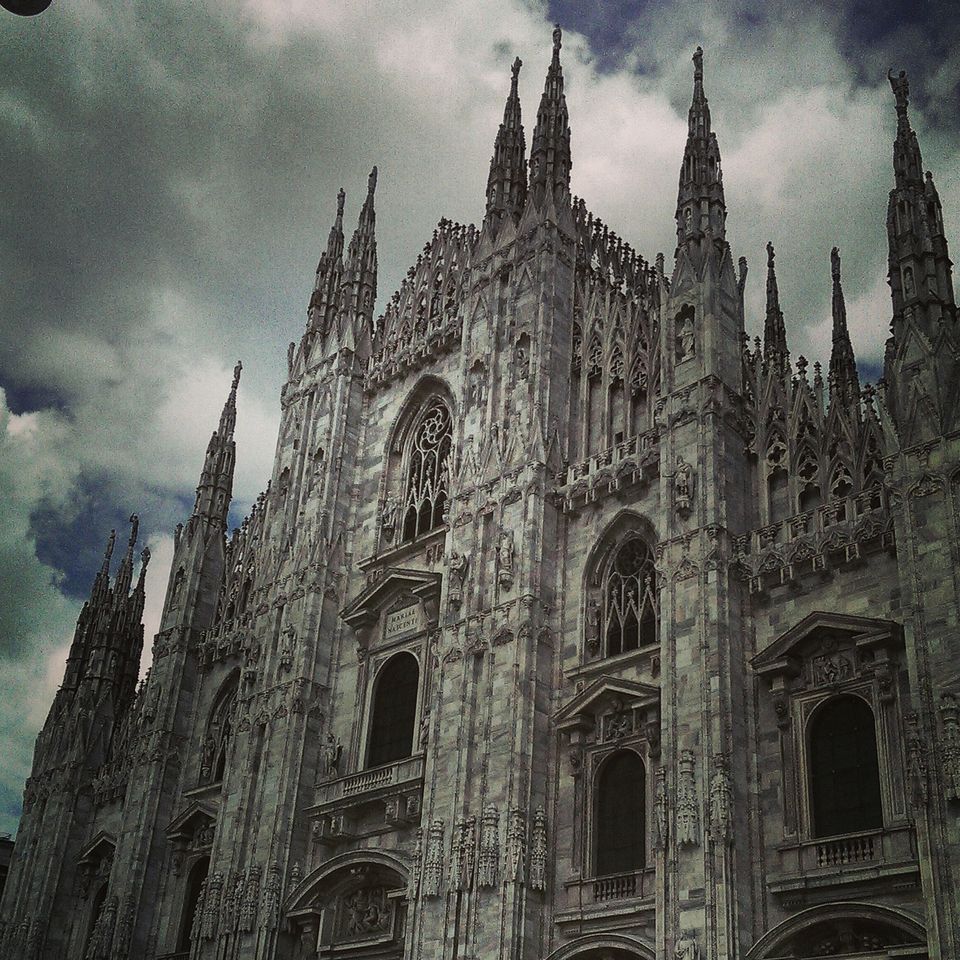 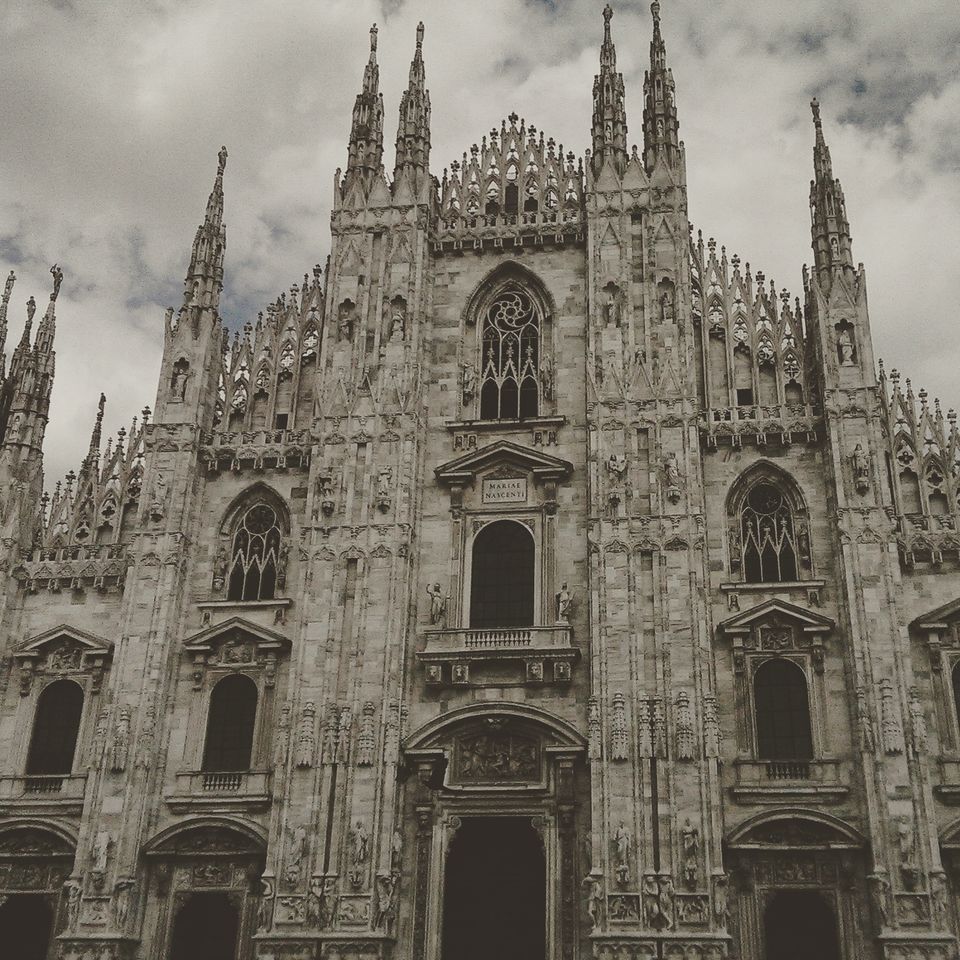 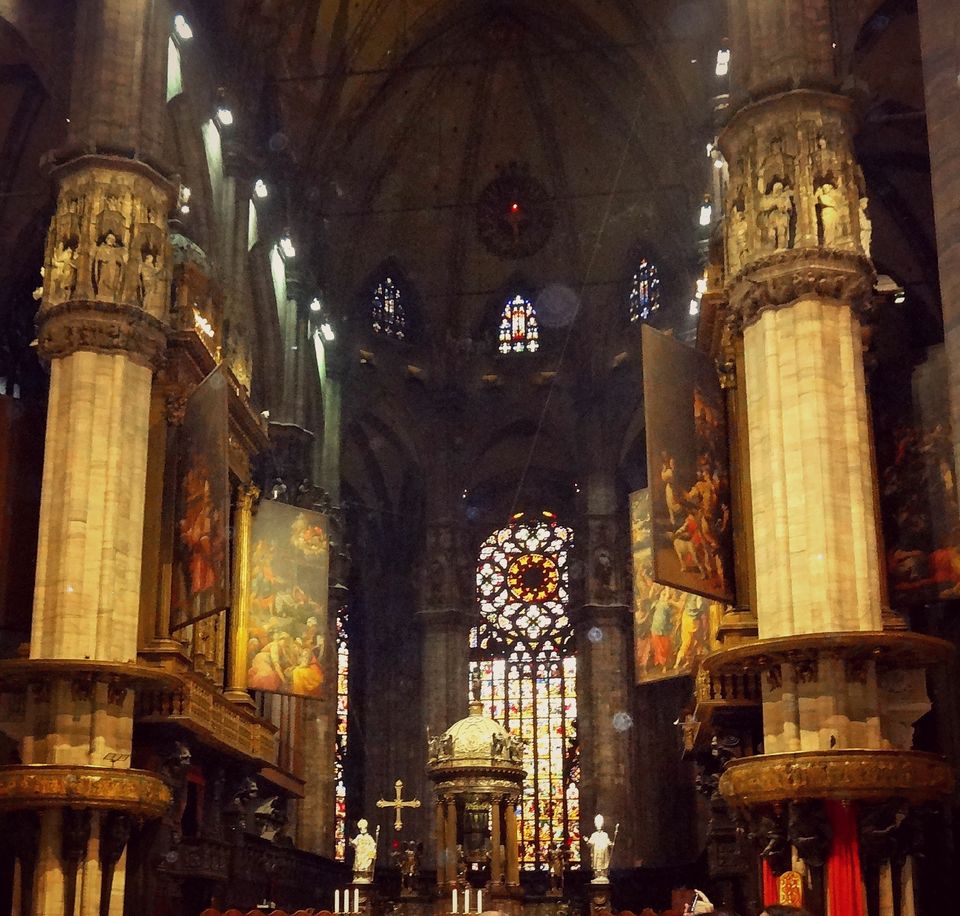 Standing tall beside the Duomo without getting overshadowed by it, Galleria Vittorio Emanuele II is the oldest shopping arcade in the world. The octagonal structure with its characteristic glass dome is a sight to see and houses all major fashion brands - think of Prada, Valentino, Versace, Moschino among others, you have them all. Owing to the many end of season sales, I came back home with several fancy shirts and dresses and I certainly was one happy girl. If you are a bigger shopaholic than I am, the Quadrilatero d'oro, or the Golden Quadrilateral, which is about 850 metres from the Galleria, is just the right place for you because it is possibly the most celebrated shopping district in the world, reflecting the true essence of Milan. Getting there: Buses, trams and the metro connect all major spots in and around Milan and the tickets come for nominal amounts. The closest station to the Galleria is 'Duomo' (about 50 metres) which serves Line 1 and 3 of the Milan metro and one can buy tickets at the station itself for 1.5 Euros. 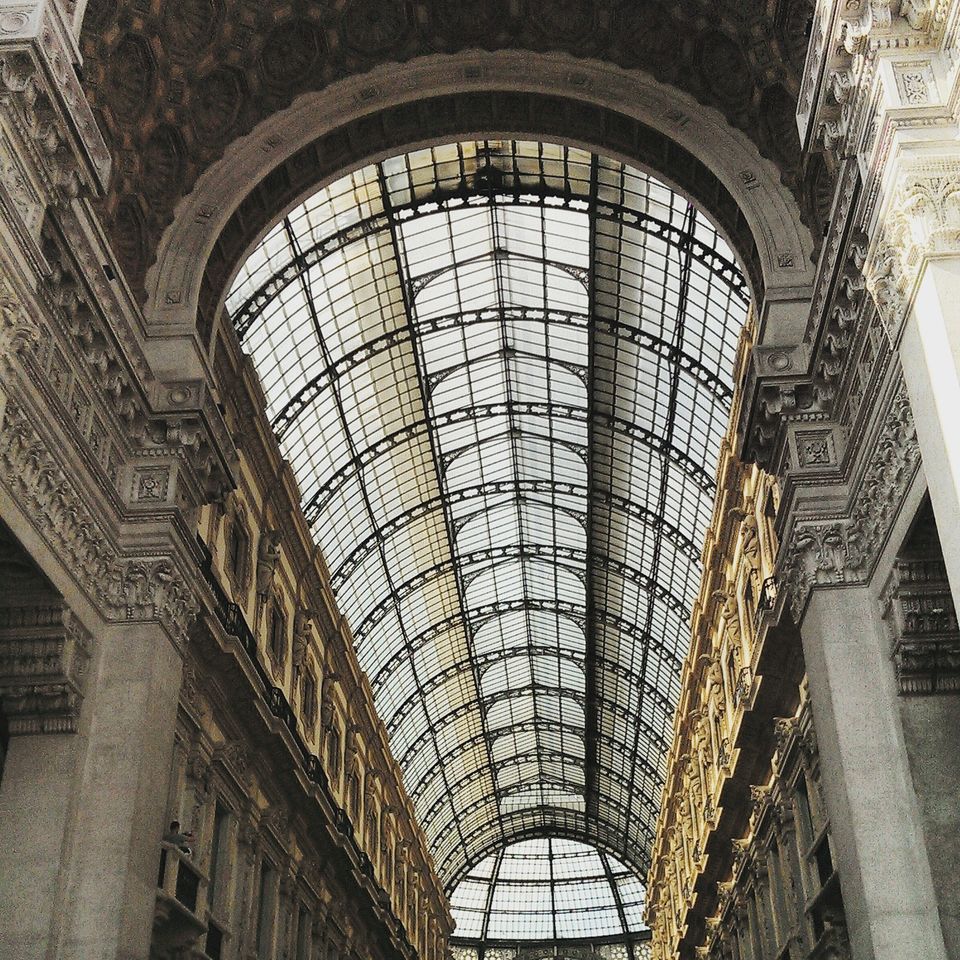 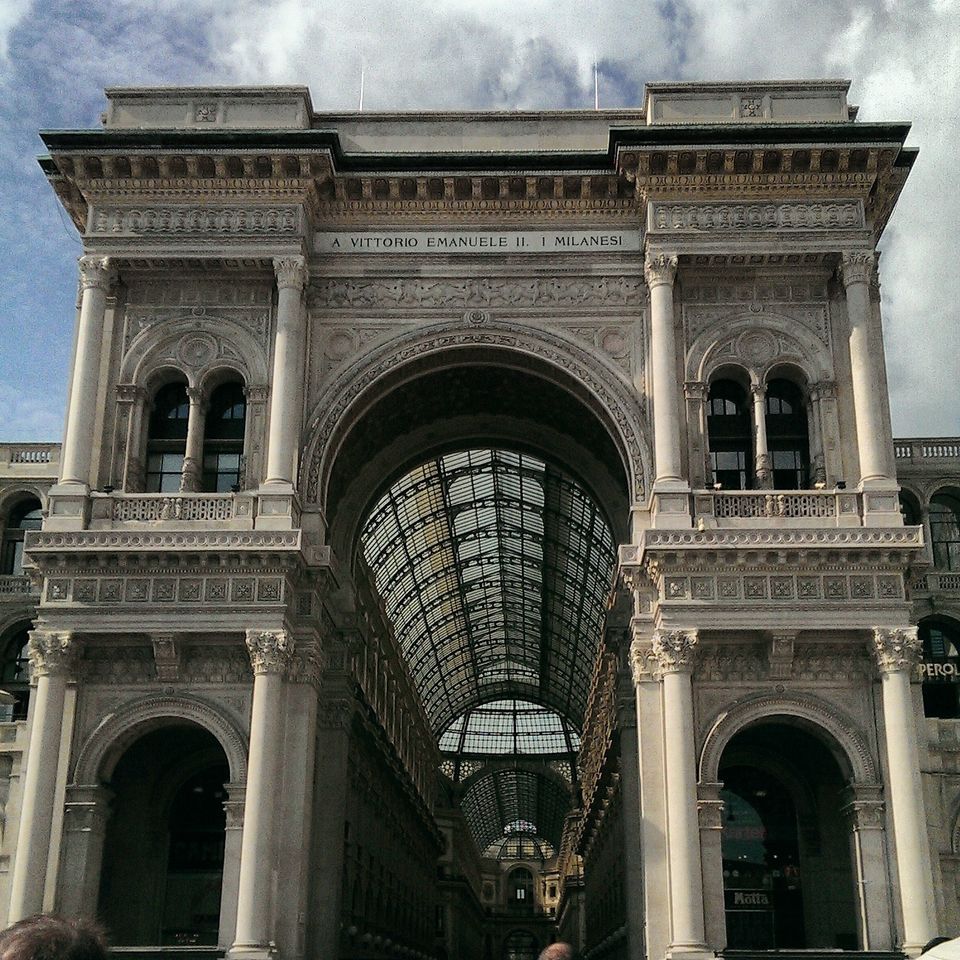 The city of Milan is now host to the Expo Milano 2015, a Universal Exhibition from May 1 to October 31, 2015. Around 140 participating countries have been working hard to showcase the best of their technology in order to be able to guarantee sufficient food for the future, which is healthy and sustains our planet at the same time. With 1.1 million square meters of exhibition area, the EXPO has been drawing lakhs of visitors on a daily basis. It truly is a wonderful platform for the exchange of ideas in order to build a more nourished future. You must not miss the Future Food District, the pavilions of Brazil (especially walking on the net suspended over it), United Arab Emirates, South Korea and Vietnam. The interactive maps around the massive exhibition site will constantly guide you and access to free WiFi is also available. For additional information, you can download the EXPO app on your smartphone or visit www.expo2015.org. While the exhibits live up to all expectations and are absolute crowd pullers, the food in most pavilions is sub-standard by all means. Go only and only if the theme really interests you because the visit is very time-consuming. Getting there: Night tickets are the cheapest and come for 5 Euros and single day tickets are of two types: Open Date (39 Euros) and Fixed Date (34 Euros). Expect the evenings to be super crowded owing to the low prices of tickets. You can either purchase them at the site after standing in long queues (probably the only way to get a night ticket) or book them online. Additionally, you can request your hotel to book tickets for you. For more information, visit www.expo2015.org/en/tickets. If you do not want to take a taxi to the Expo site, the metro is the best option. Purchase an extra-urbano (extra-urban) ticket, and take the Linea 1 (Red line 1) to Rho Fiera Milano metro station. A lot of walking is involved. For more information visit www.expo2015.org/en/explore/exhibition-site/how-to-reach-the-expo-site 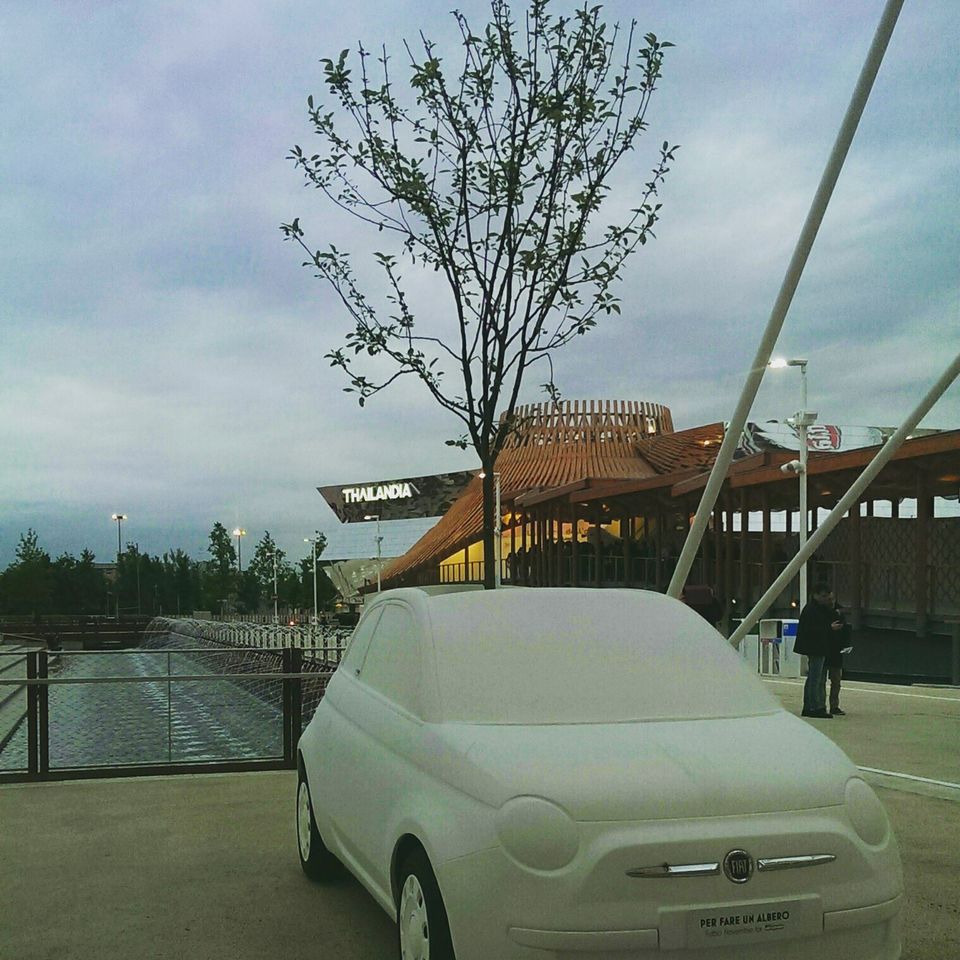 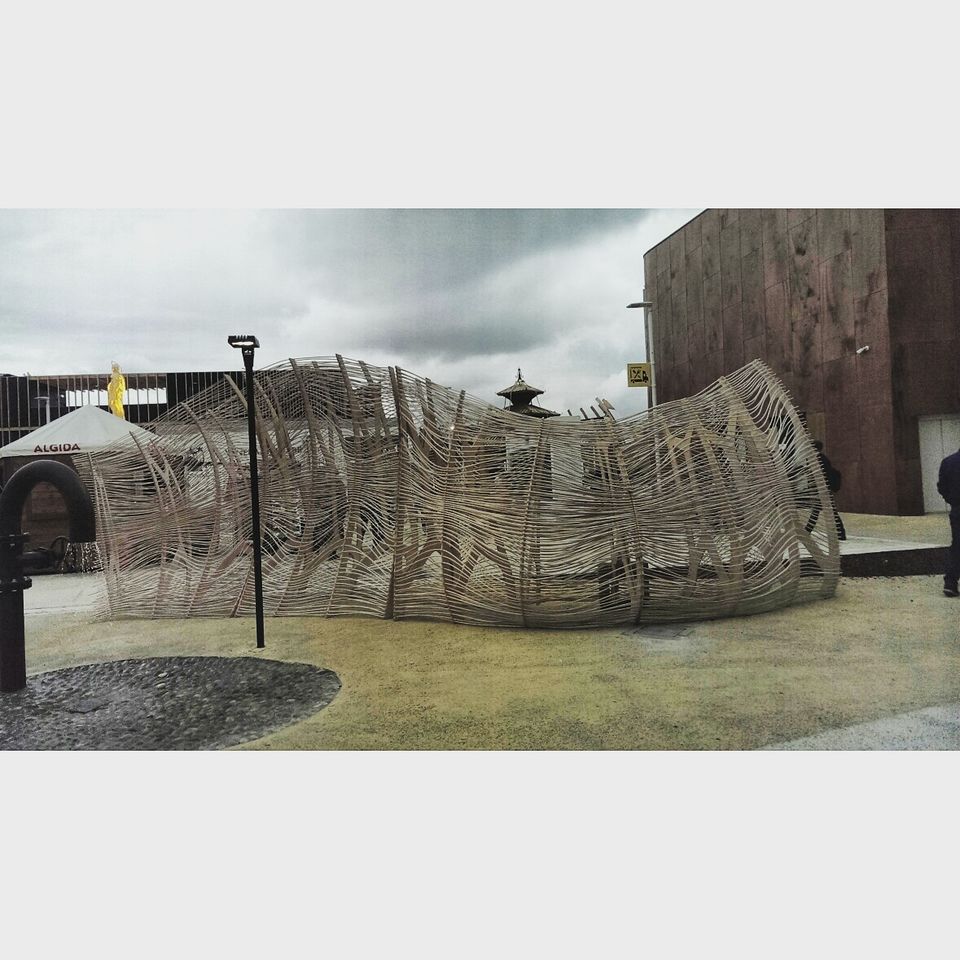 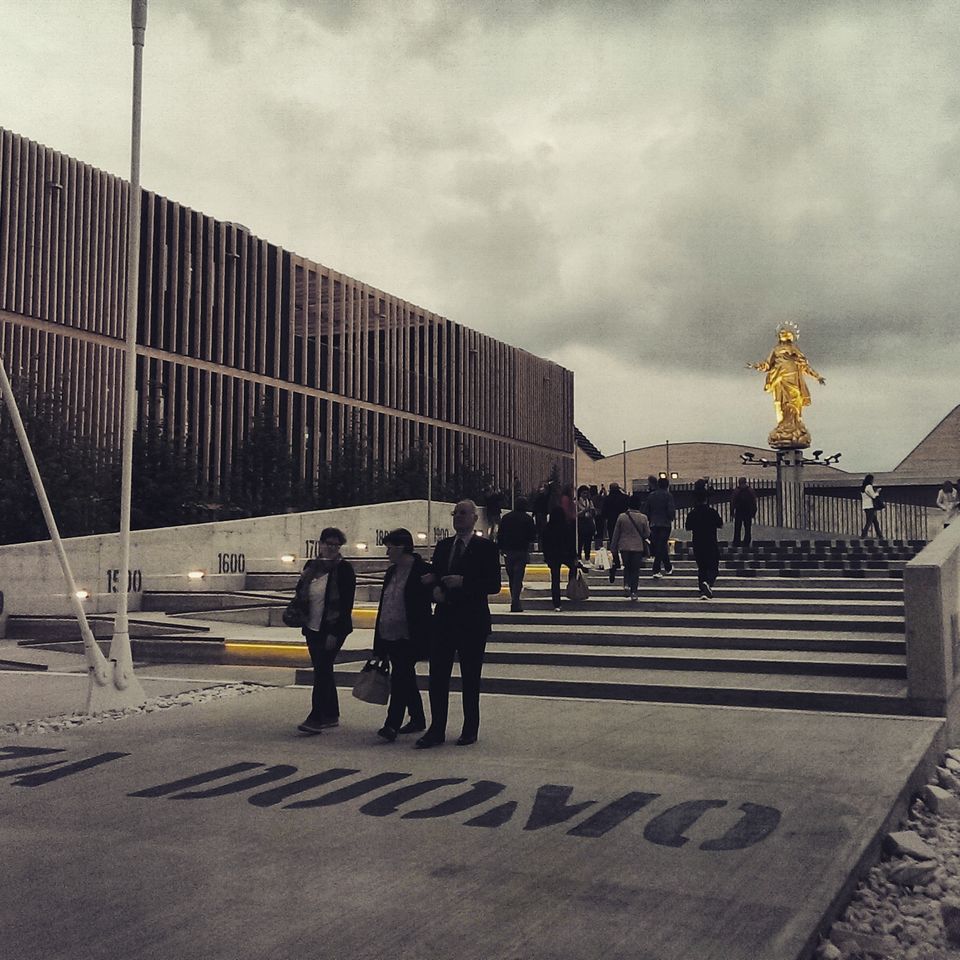 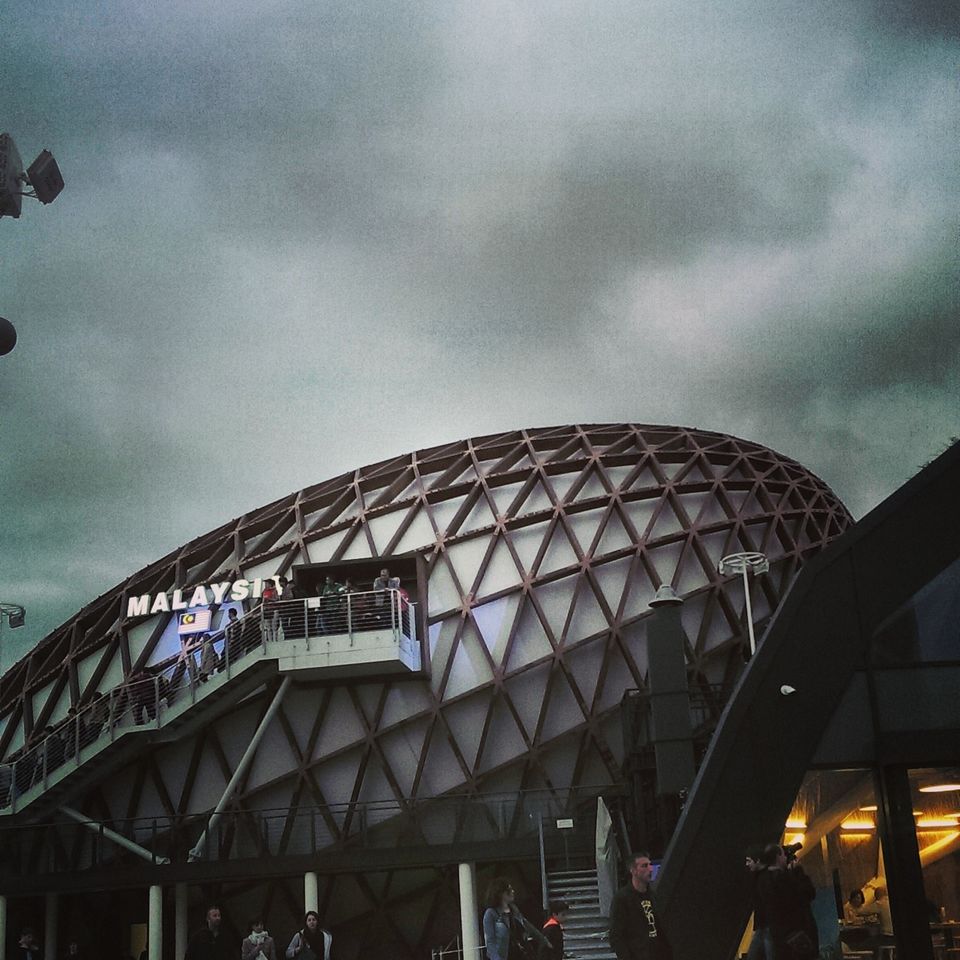 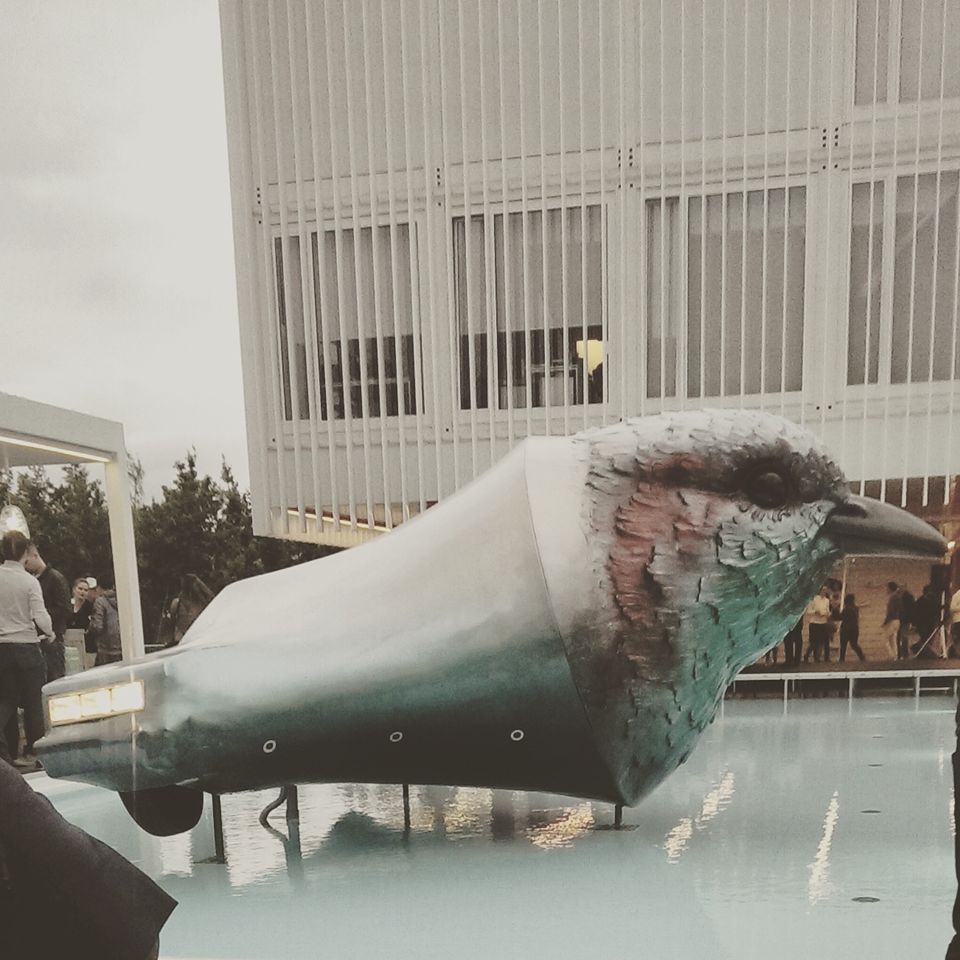 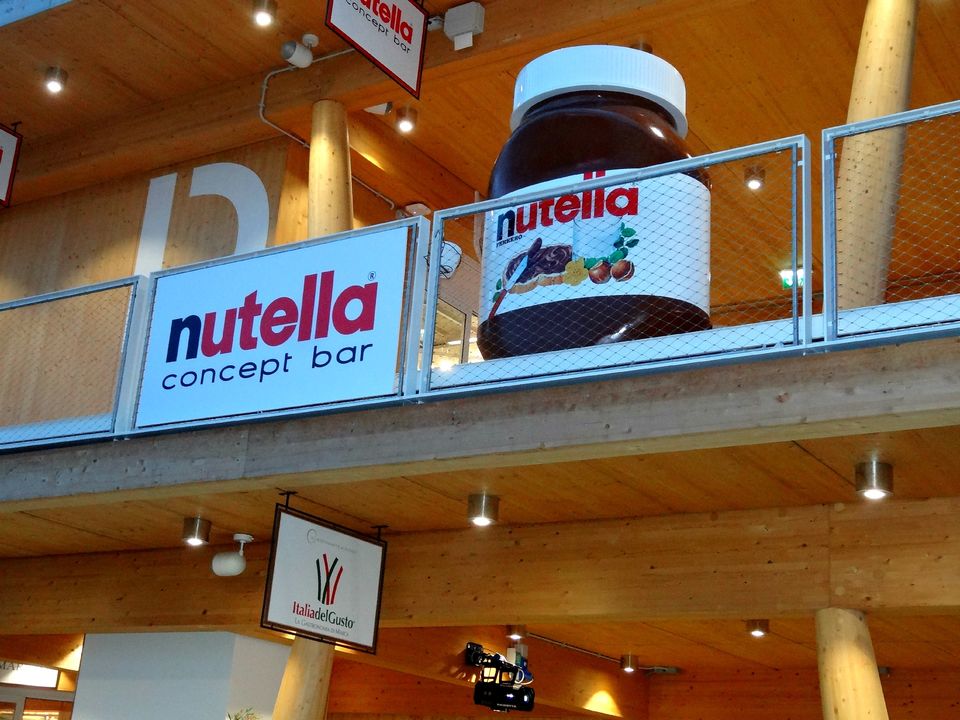 The Basilica di Santa Maria delle Grazi is known to the world probably because it houses Leonardo Da Vinci's fabled 'The Last Supper' in an adjoining chamber. The most famous mural on this planet depicting Christ's admittance to the knowledge of the betrayal was unfortunately greatly damaged due to restoration work, yet nothing stops thousands of people from being transfixed at this masterpiece on a daily basis. The details on the windows behind Christ and his disciples effectively illustrate the talent that Da Vinci possessed. Getting there: Entry to the Basilica is free but tickets need to be booked months in advance for one to see Il Cenacolo Vinciano (The Last Supper) on www.vivaticket.it or through their call centre number mentioned on the website. The ticket should come for about 10 Euros inclusive of everything and your tour will last 15 minutes. English language guided tours however cost more (3 Euros). If you have more money to spare and want a detailed guided tour that lasts an additional 30 minutes, visit www.tickitaly.com and shell out 70 Euros. I was not lucky enough to get tickets because of the huge number of EXPO visitors, therefore book ahead. Absolute last minute tickets which include a city tour can be bought for 75 Euros from en.zaniviaggi.it. Cadorna serving Line 1 and 2 is the closest metro station and is about 800 metres from the basilica. Tickets can be bought at the station itself for 1.50 Euros for a single journey which is valid for 90 minutes. 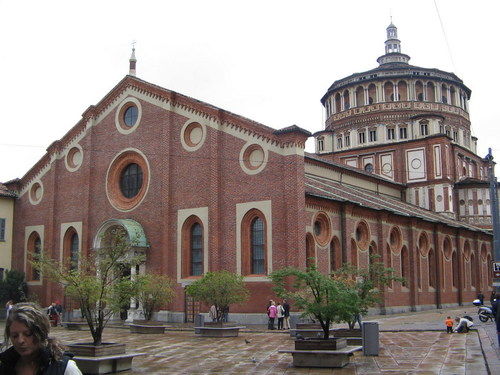 This area plays host to one of the most popular flea markets in Milan and is worth visiting on Saturdays when it is open from 8 am till 5 pm. Right from clothes, shoes and bags to the freshest of produce ranging from fruits and vegetables to olives, cheese, meat and bread, everything that one can think of can be bought here at reduced prices. If you are good at bargaining, you have come to the right place. There might be some second-hand stuff on display, so do check the merchandise a few times before striking a deal. Getting there: Sant'Agostino is the nearest metro station and is about 250 metres. It lies on Line 2 of the metropolitan system of Milan and tickets can be bought at the station for 1.50 Euros. 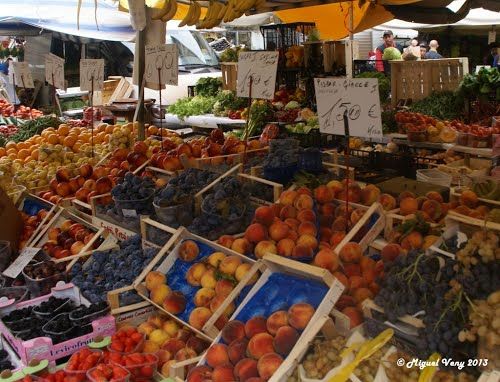