The incident belongs to the summer of 2015 when I along with my friend, Krishna, was going to Russia for an internship. My flight was booked from IGI airport New Delhi to Moscow ( Vnukovo International Airport) airport,which was further connected to samara city from Moscow through domestic flight.

The flight date was 24 may 2015.The incident started when we both landed at Moscow airport at 8 am according to our watches.

And the next flight for samara was at 10:40 am. So we were chilled and waiting in queue for having our boarding pass. Passengers going to berlin, who just came with us, were in hurry as their next flight boarding time was about to close in 5 to 10 minutes. So we allowed them to go ahead of us in the queue. After about 15 minutes, I saw the information board displaying close of boarding time my flight at 10:10 am. Then my eye rolled on current time on the board and I was shocked. It showed 9:20 am.

Within minutes we figured out that it’s because of difference in time zones. The bottom line was that we were left only with 50 minutes for having our boarding pass, collecting luggage,checking and more formalities. At IGI airport, it took more than a hour for all these. It’s being a domestic flight, we still had a chance to catch flight on time. Very soon we both got our boarding pass. We were told to collect our luggage from ground floor and then to go to second floor for flight.

Then we rushed to the immigration counter. There we got confused because of 3 types of counters:

Just to confirm, Krishna went to counter 1 and I went to bylo Russian counter. Number of both of us came simultaneously on respective counters. I asked the lady officer at the counter if it’s the counter for a foreigner. She took my passport and started doing some stuff on the computer. Soon Krishna was cleared and allowed to go. I understood that I am at the wrong counter. I told her that I have come to wrong counter. She signalled me to stay quiet. I said her repeatedly and got same signals. Then she handed my passport to her assistant who took it to an office nearby. I started to get the feeling to miss my flight. After few more tries, it seemed to me that she is not understanding my language and I also remembered the fact that very few Russians speak English. Then I showed her the boarding pass with last boarding time at 10:10 am.Then she said me to go into that office.

I rushed into the office and I was stunned. There was a pile of passports at the desk of few working ladies. As I entered, one of the lady caught me by my shoulder and pushed me out of the office. After few minutes, I gathered my courage and re-entered the office and directly showed them the boarding time on pass without wasting a second. She checked something on her computer for few minutes and then told me to follow. We went then to the right counter where Krishna was cleared. After immigration clearance, I ran to the ground floor.

Now the Moscow time was 9:50 am. On ground floor, there was a long horizontal escalator with luggages over it. Now, there was a new problem, I didn’t remember my trolley look as my brother bought it just few hours before my flight at new delhi and also repacked all my stuffs from older bag to new trolley. After putting some pressure on my memory neurons, I could only memorise that something like “TYCOON” was written over it. I start searching the trolley from start of escalator to the end, but couldn’t find it. By then I started sweating with nervousness of missing my flight. Soon my common sense showed it’s presence, with the thought that I am already too late, so my trolley must be at the last. At the end of escalator there was like a hip of luggages. I checked all of them but couldn’t find mine. There was a large heavy curtain at the end through which some of luggages were falling outside. I removed the curtain and entered into a chamber where luggages were being loaded on a truck. Finally I saw my trolley there. Had I been late few more minutes, I would have missed my trolley.

The curtain was about 5 times larger and huge than the pic.

Now the Moscow time was 10:05 am. I ran as fast I can to the second floor. Soon I heard my name being announced for the flight. Nothing can be worse. Then I entered into the checking area, where an officer saw my boarding pass and said

“ You have to go to domestic, this is international, go to first floor”

I ran to domestic checking area. I took out all electronic equipments from my trolley and bag (it was on my back all the time) and put it in a basket for checking. Also had to remove my belt for checking. My name being announced repeatedly was making me more nervous and I was sweating like hell in a cold country. I got cleared when my turn came. I quickly repacked all the stuffs(except wearing my belt) and took my bag and rushed for the allotted boarding gate with holding my pant slightly by hand as it was a little loose without belt. Fortunately, the gate was near. Krishna and a flight attendant were at the gate announcing my name. I quickly gave her the boarding pass and she returned me half of that. Then we start following her for the flight.

Then only Krishna asked me

“Ashik, where is your trolley”

I had left my trolley at the checking area, I only brought the bag. I said to the attendant to wait for few minutes so that I can bring the trolley.She said

“No, I won’t accept anymore”

I didn’t listen anything and ran backwards. I thought “stuffs in my trolley are costlier than the flight cost, I can’t miss it”

I founded my trolley standing innocently at the checking area. I took the trolley by one hand, belt & boarding pass in other hand, and with bag on my back. Now the next moment was the worst of all. Now none of my hand was free to hold my pant. But anyhow I ran for the gate with holding my slightly loose pant with one of my elbows. That moment was very embarrassing, every passenger waiting between counter and gate were watching me as if I’m a circus joker.Because they were strangers, it didn’t matter to me much.

I reached the gate to find no one there. Both, Krishna & flight attendant, were gone. I almost believed that I had missed the flight. But couldn’t give up now. I ran for the attached stairs to the gate and started going down. Soon I heard the loud shouting voice of that Russian beautiful attendant. Flow of courage started streaming in my blood. She was shouting in Russian, I didn’t understand if she was abusing me or telling me to rush.

Then I saw the bus, full of passengers waiting desperately, to take us to the plane. I got on the bus and sat on the bus floor, breathing heavily.Krishna took hold of my all stuffs and first I wore my belt.

I saw my watch, it was 9:25 am, which means 10:25 am by Moscow time. I couldn’t believe that a terrible incident just passed over me in my first international journey. I still don’t know why they waited for me for about 15 minutes.

Those terrible moments have now become one of my most memorable moments in terms of experiences.Whenever I think of those moments, I ask myself, was it me, really!!

Me after riding on the bus 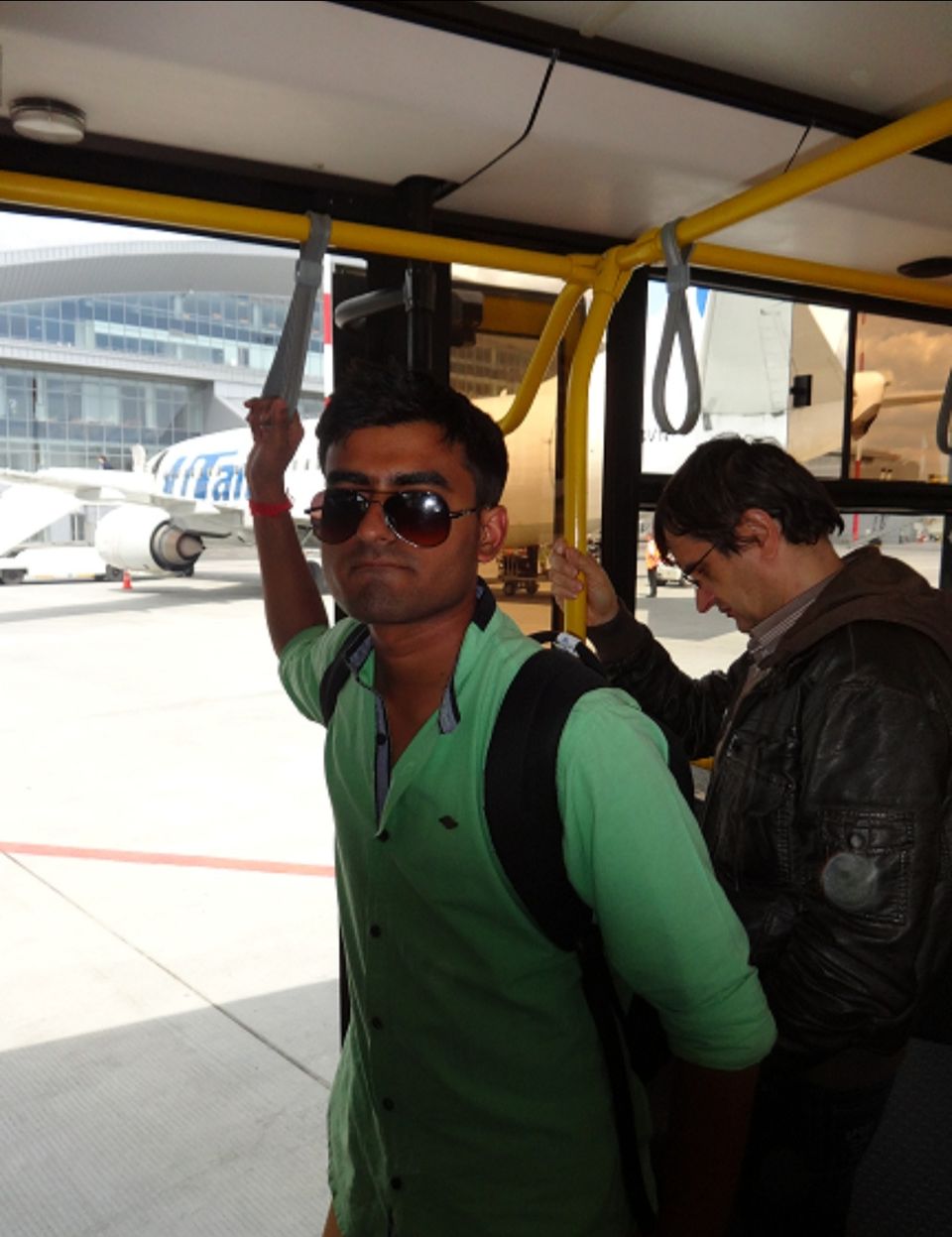