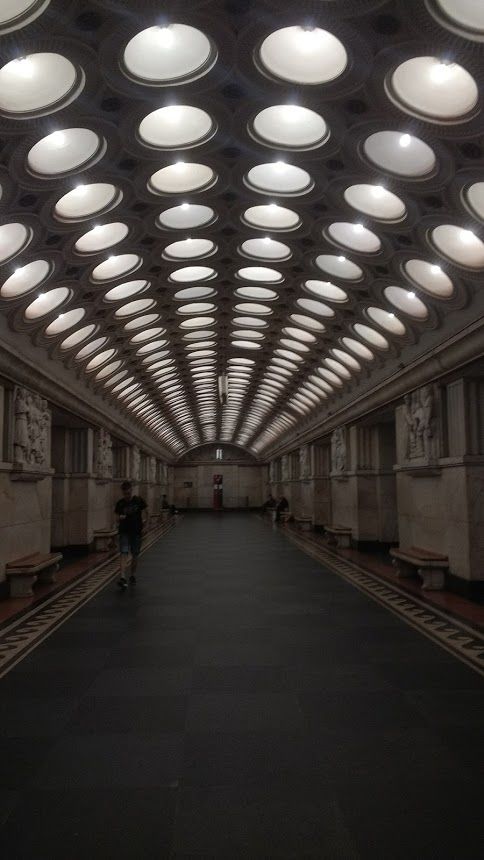 The metro stations of Moscow exist in flamboyance, oblivious to the mediocrity of their counterparts across the world. One of the largest rapid transit systems in the world, the Moscow Metro hosts a grand total of 222 stations, accommodating an average of 7 million passengers every day. Let’s see what makes it so intriguing.

“Forget about carrying the camera or even your phone”, my friend tells me as she starts to step out of the hostel with me walking a foot behind. As backpackers on a budget, we did not have the luxury of booking a cab to the Kremlin or the Tretyakov Gallery, so we decided to tour the most accessible attraction- the underground. And thus the two of us headed out to explore the metro stations, with a metro map, one phone, our metro cards, and a bottle of water. So let’s address the elephant in the room early on. The pictures aren’t the best, as they have been taken on a poor-resolution phone camera, by two girls who were more curious about observing than clicking that rainy evening.

For the curious readers

The history of the Moscow Metro dates back to 1932 when the first-ever plan of the system was laid down. Three years later, the first metro line was opened to the public. Since then, the metro development has proceeded in stages over the years. The ones built in the first stage saw fairly simple architecture and design, but a highly welcoming response by the public. Performances by workers involved in the construction of the rapid transit system were held in the celebrated Bolshoi Theatre, to give you an idea.

With the second stage, the stations started assimilating brilliant architecture, lighting, and design. During this stage, Mayakovskaya stood out with its satisfactory aesthetics, which weren’t as ornate as the others, but pleased the eye nonetheless. The pictures show the plain marble flooring at Mayakovskaya, coupled with arches dipped in a hint of shimmery silver, and a tiara of ceiling lamps.

The main hall of Mayakovskaya metro station glows in modesty 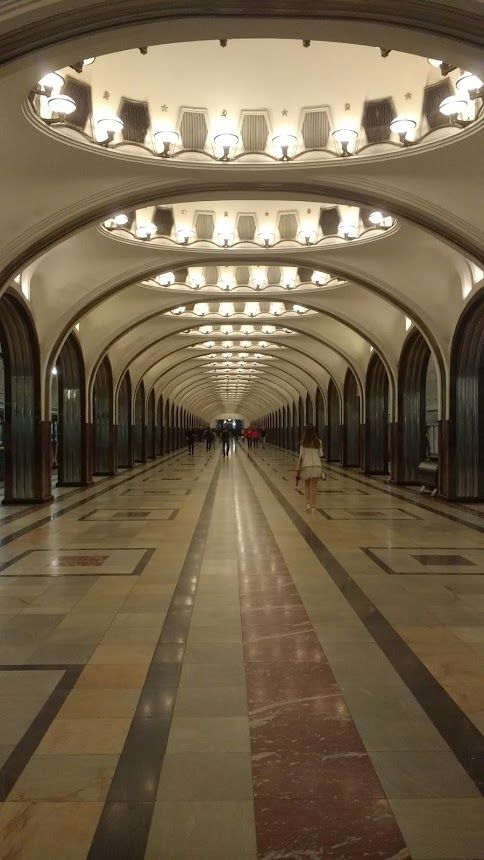 Hidden lights at the Mayakovskaya metro station add to its elegance 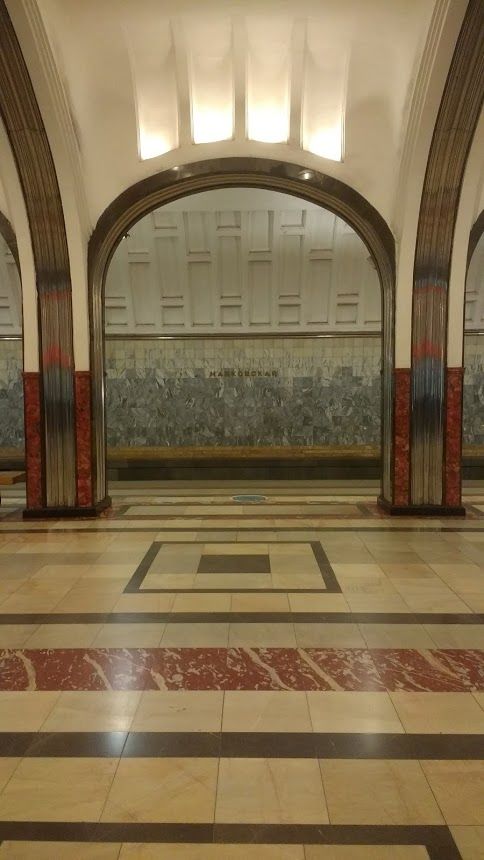 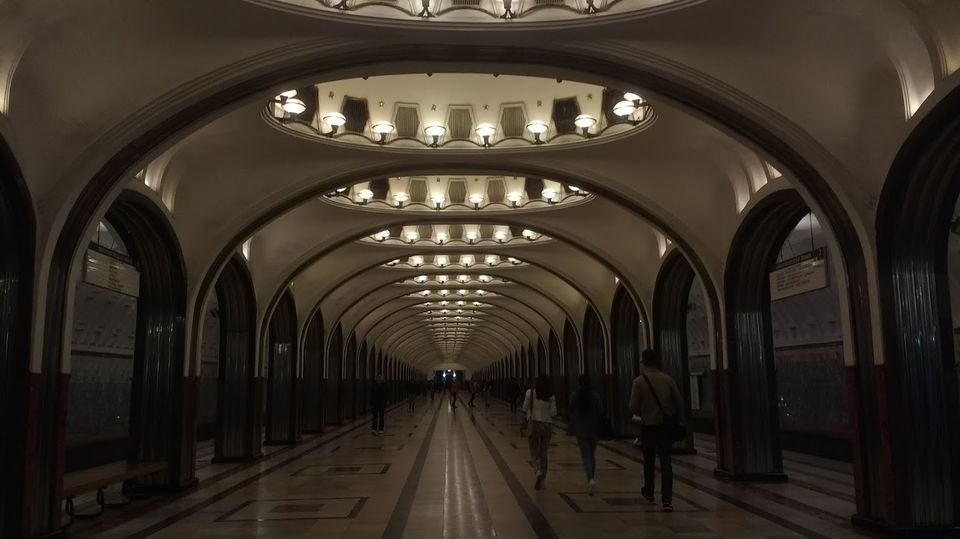 By the time the third stage was in progress, Russia was preparing for the Cold War. Foreseeing its terror, multiple metro stations were constructed to double as bomb shelters, if the need arose. Stations like Arbatskaya and Kurskaya, amongst others which fall on the deep blue line in the present-day metro map, can still serve as safe houses. How else can your country make you feel safer?

Built during the same stage, the aisle of the Arbatskaya metro station flaunts a series of pale white arches, supported by contrasting red and gold marble platforms. The ceiling features exquisite floral designs, holding the umpteen chandeliers that light up the main hall. A member of the same line, Park Pobedy is one of the deepest metro stations in the world at 84 metres underground, also flaunting some of the longest metro escalators. 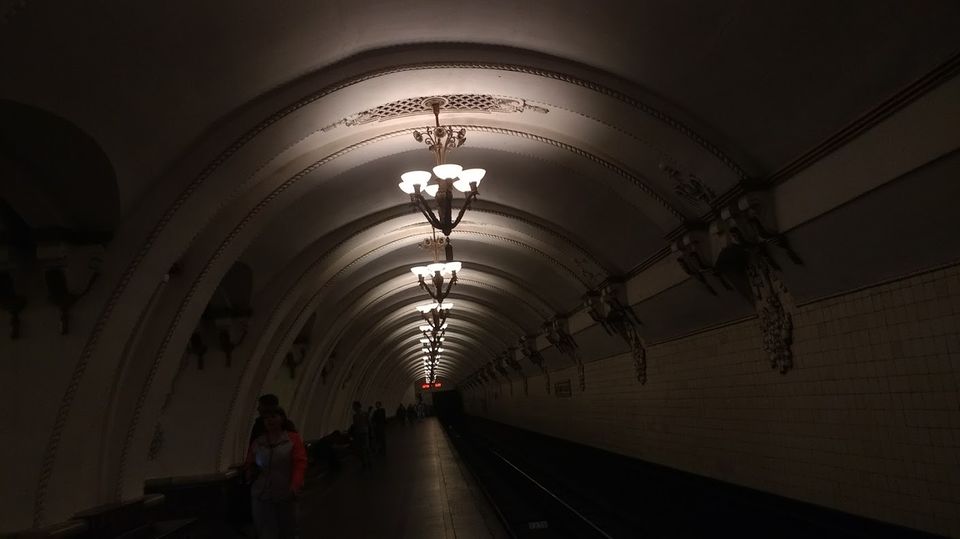 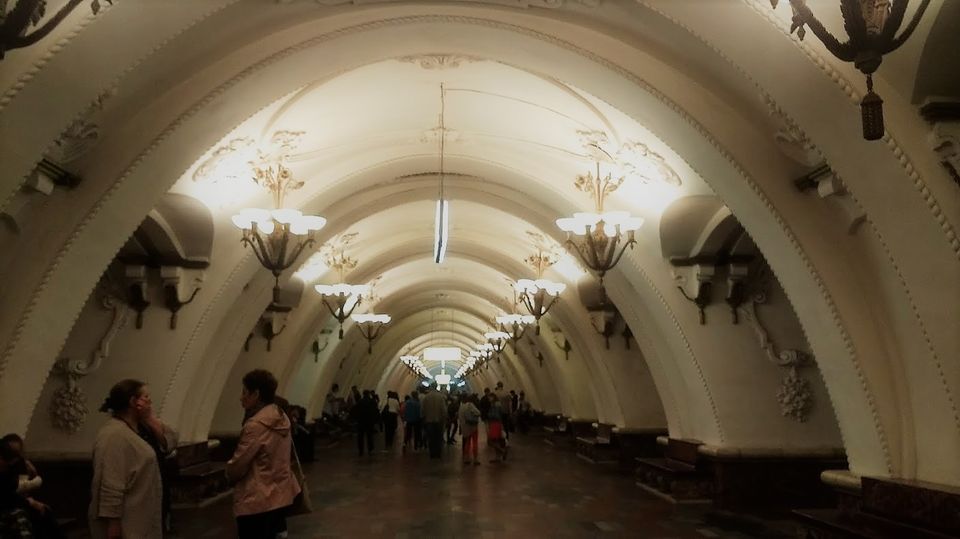 The metro’s distinctive, to say the least

Many metro stations pay homage to the leaders, the great revolutions, as well as the great artists of Russia. Built in 1938, Ploschad Revolyutsii is one of the most popular attractions in Moscow metro. A marvellous 76 life-size bronze sculptures are placed on the arch flanks, depicting the artists, soldiers, and even school children of the time.

The sculpture of a Soviet soldier in a vigilant posture holding his gun, a scene paying homage to the Russian Revolution 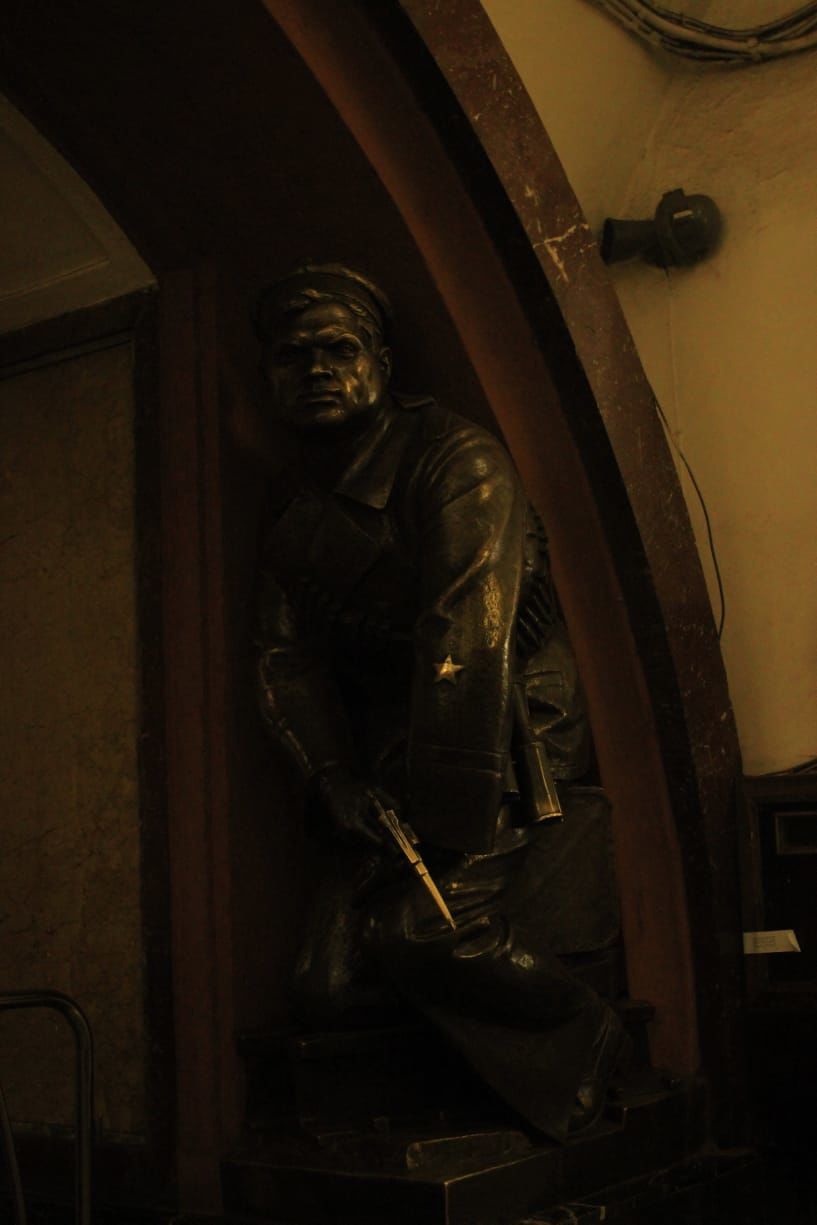 Dostoevskaya pays its remembrance to the revered Russian novelist and philosopher Dostoyevsky. The walls of the stations depict scenes from his famous novels, along with a grand black and white picture of the author catching the attention of the visitors as soon as they enter the platforms.

Other stations that stand out among the total of 222 are Prospekt Mira, Kievskaya, and Novokuznetskaya. Novo-Kuznetskaya walks you through the proud history of the Great Patriotic War, scenes of which are painted in the ceiling as octagonal roof mosaics. The Kievskaya stations rest on brown as well as the deep blue lines, and needless to say, both are worth a visit. Dedicated to the bond that Ukraine and Russia share, they exhibit rich golden decoration paired with mosaic paintings of Kiev and its people. Prospekt Mira, on the other hand, breathes a tranquil air of soberness in its white ceilings carved with geometrical patterns and floral etchings, given a rustic appearance by the extravagant copper chandeliers. 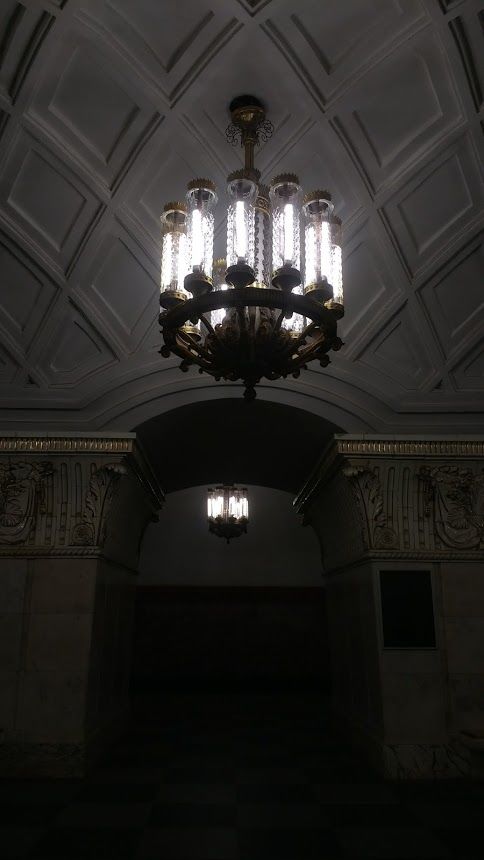 Enshrining art and culture in the monotony

And indeed, I have kept the best for the last. Elektrozavodskaya, inaugurated during World War II, holds in its ceiling a total of 318 incandescent lamps lined up in 6 rows. Also featured on the pillars are 12 marble bas-reliefs, made in an effort to depict the tragedies of the war. Nothing like any other metro stations of Moscow and perhaps the world, this is a marvel strategically made to leave you spellbound. 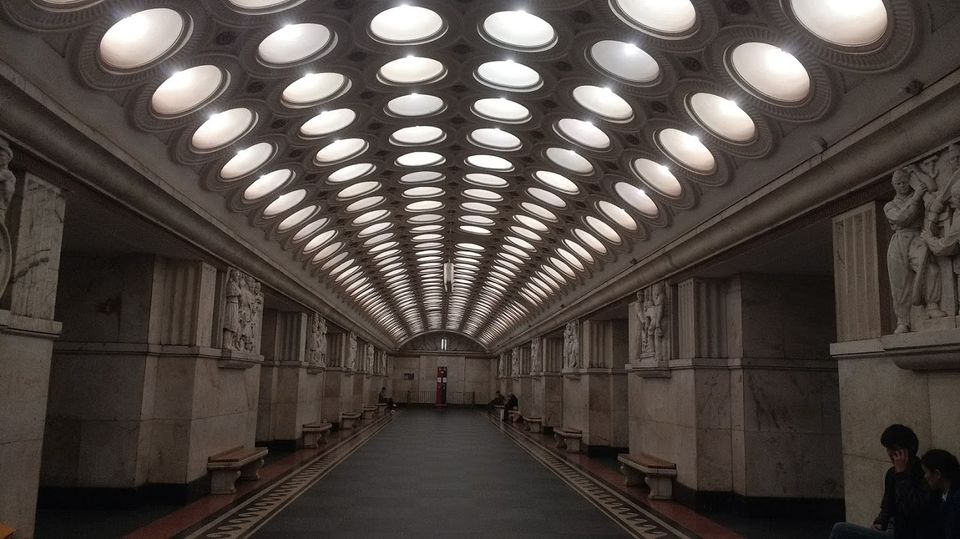 Bedecked with paintings made on colourful stained glass windows, the central hall of Novoslobodskaya is a visual treat. Along with 32 intricately designed stained glass panels surrounded by a fine bronze lining and illuminated from within, it has to offer a design mimicking an optical illusion, along with mini-chandeliers that resemble pearl necklaces. 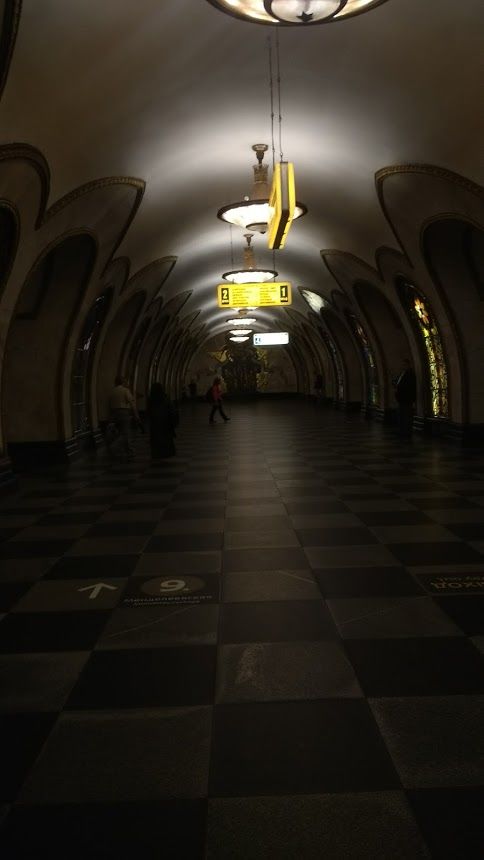 How pretty can a stained glass window painting can be? 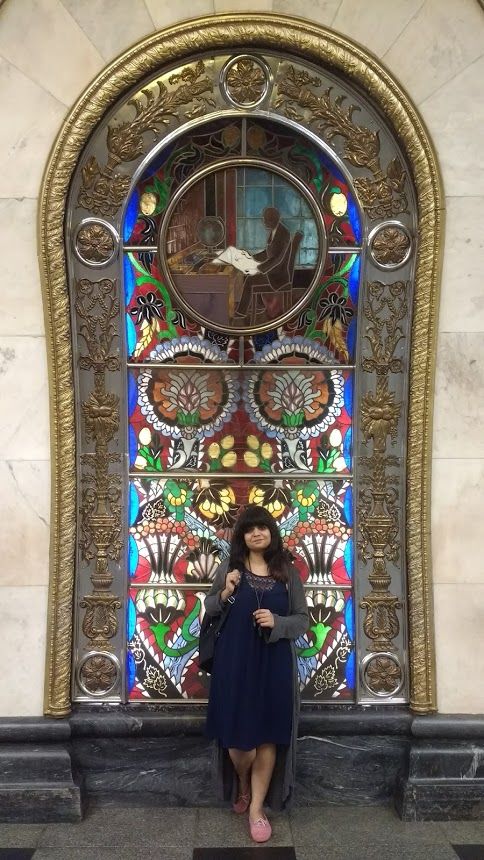 A mosaic painting of a lady with a child, "Peace throughout the world" 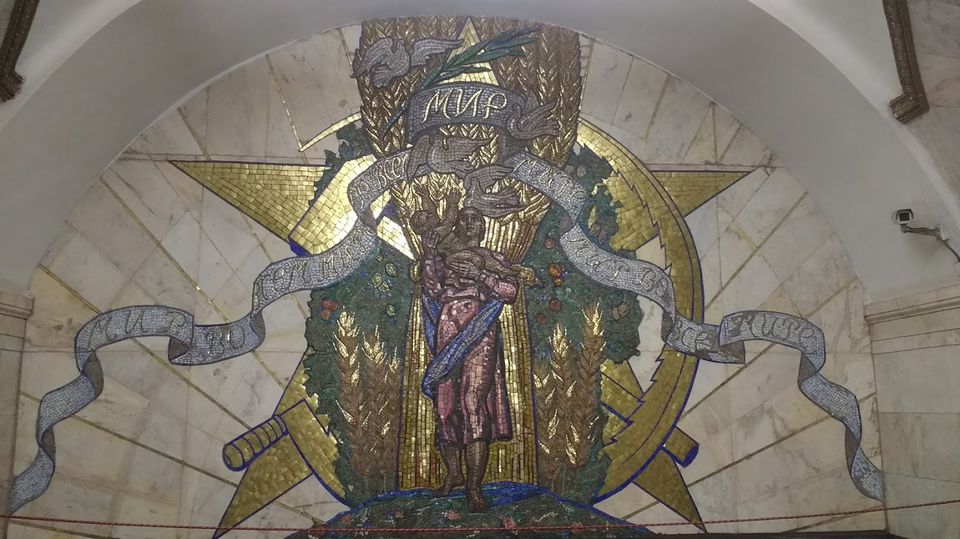 It is everyone’s favourite for a reason. The bold yellow ceilings, coupled with scintillating baroque-style copper ornaments, outshine the grandest of ballrooms. Adding to the splendour are the giant chandeliers and concealed lights that glow in the niches in all halls. The architecture of this station is a representative of the rich art and culture that Russia holds, and it never fails to fascinate.

Scintillating copper tiles sit together to make an intricate picture 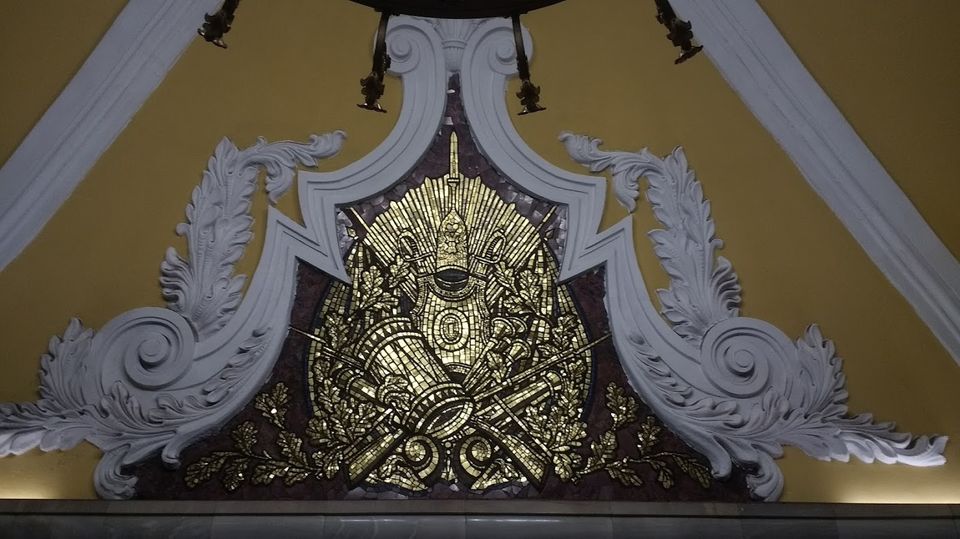 The marvelous Komsomolskaya central hall in its matchless beauty 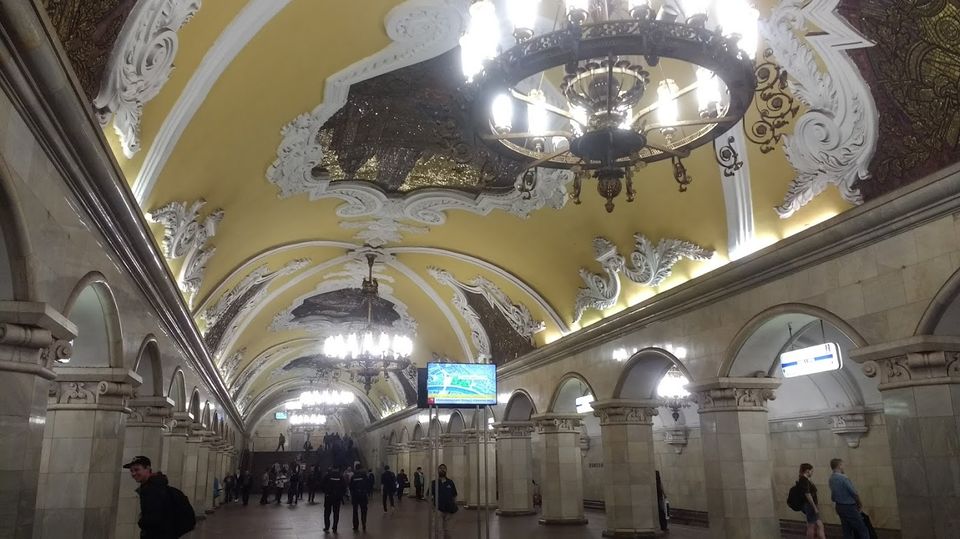 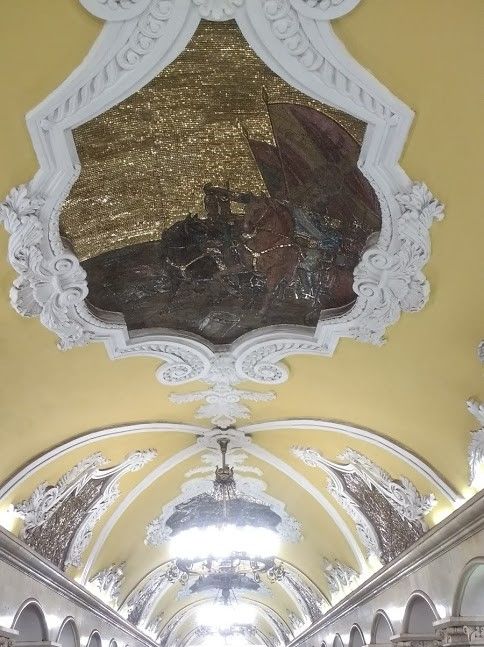 A thought can go a long way

If by now, you are wondering why they made Moscow Metro so stunningly gorgeous when plain-walled halls could have done the job, I’ll tell you this. Art is not necessary, and is hence, very important. The metro stations were designed by the most talented Russian architects keeping three things in mind- aesthetics, technology, and ideology. And it is on the pillars of these that art proliferated, setting examples for the aspiring architects, designers, and artists, and bringing an art revolution of its kind. The persons who methodized the system were relentless believers in Svet and Svetloe Budushchee- radiance and a radiant future of the country, and thus these metro stations serve as an inspiration for Russians to believe in the bright future of the country every time they look at the eminently lit halls on their everyday commute.

The peculiar ceiling lamps of the Kurskaya metro station 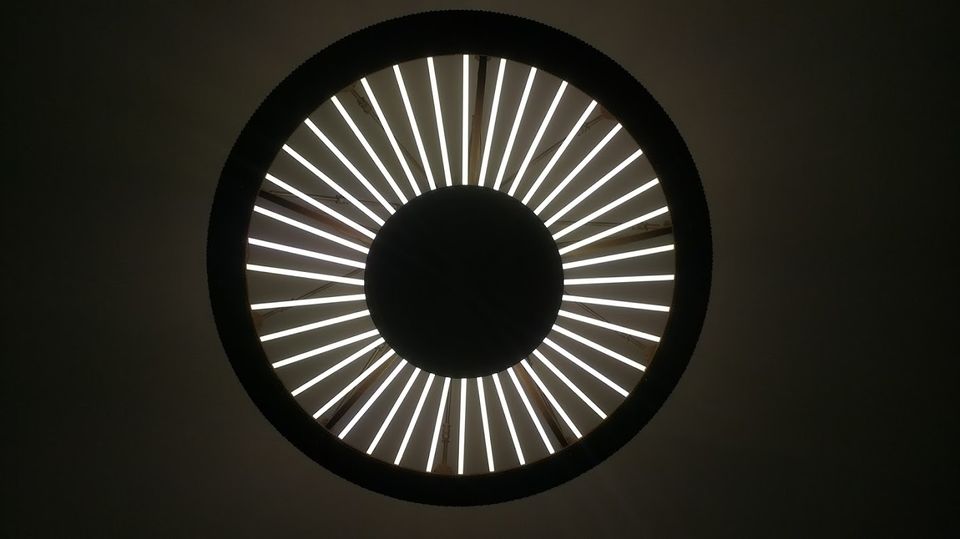 The lamps at Novoslobodskaya resembling a pearl necklace 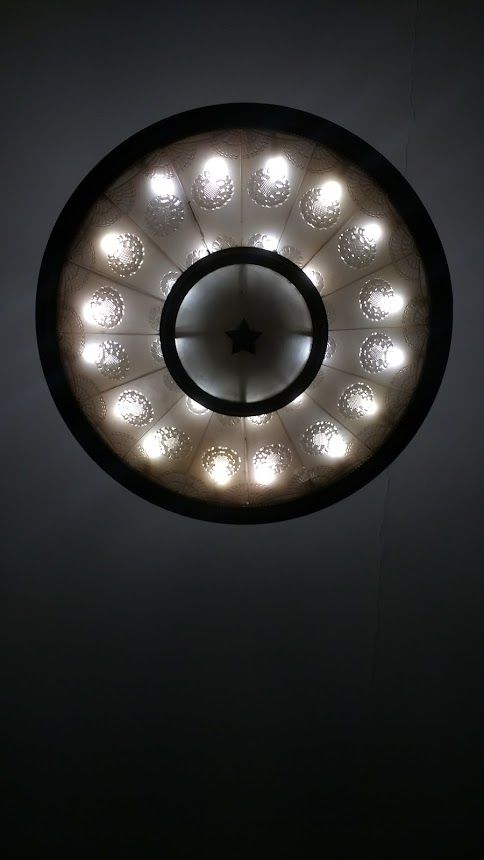 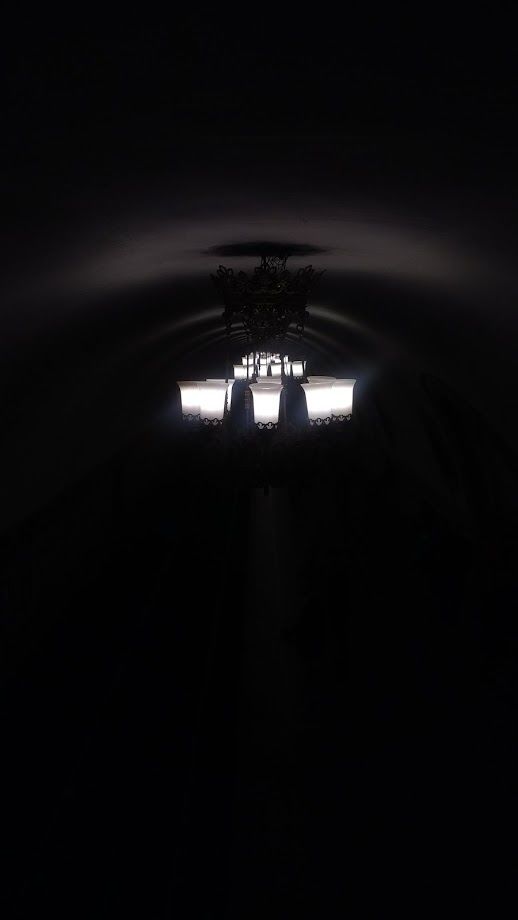 All of this, of course, I had no idea about when I stepped in and out of the metro cars, hopping from stations on the brown line to the ones on the deep blue or red. I believe it takes unceasing fascination to come across the essence of what a place has to offer. The next time I’m travelling around Europe, I would not miss the opportunity to take a day and visit the metro stations again. But this time, with a pair of eyes that is scrutinizing and more appreciative.

Just another day at Moscow Metro 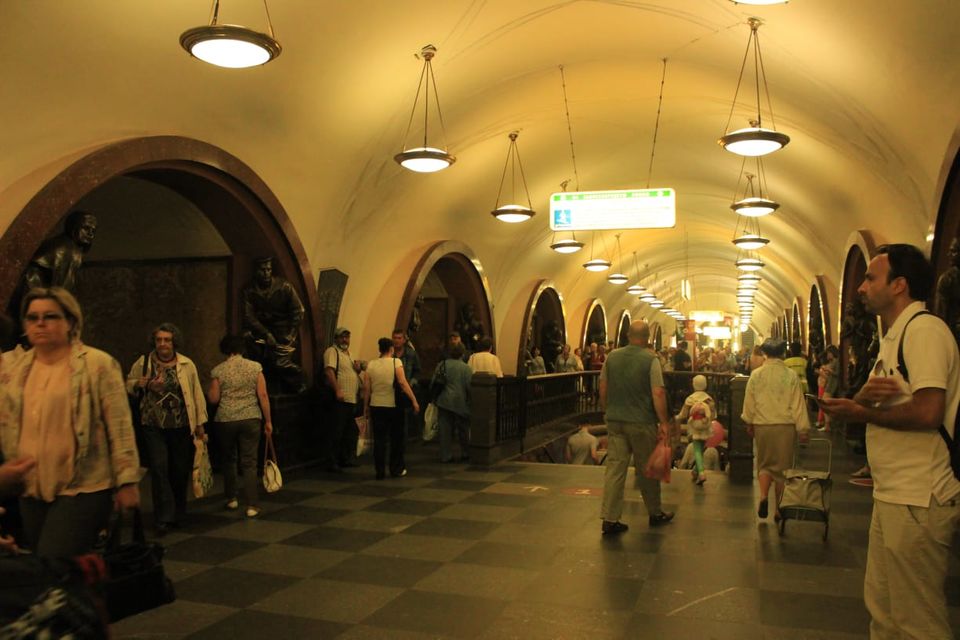 SPONSORED
Want to book a similar trip?
I accept the Terms of Use and Privacy Policy of Tripoto.
SPONSORED
Related to this article
Weekend Getaways from Moscow,Places to Visit in Moscow,Places to Stay in Moscow,Things to Do in Moscow,Moscow Travel Guide,Weekend Getaways from Art,Places to Stay in Art,Places to Visit in Art,Things to Do in Art,Art Travel Guide,
Tagged:
#moscow#metro#metro stations#russia#art#architecture#history#culture#russian architecture#russian art#pretty metros#subway#underground#trains#train stations