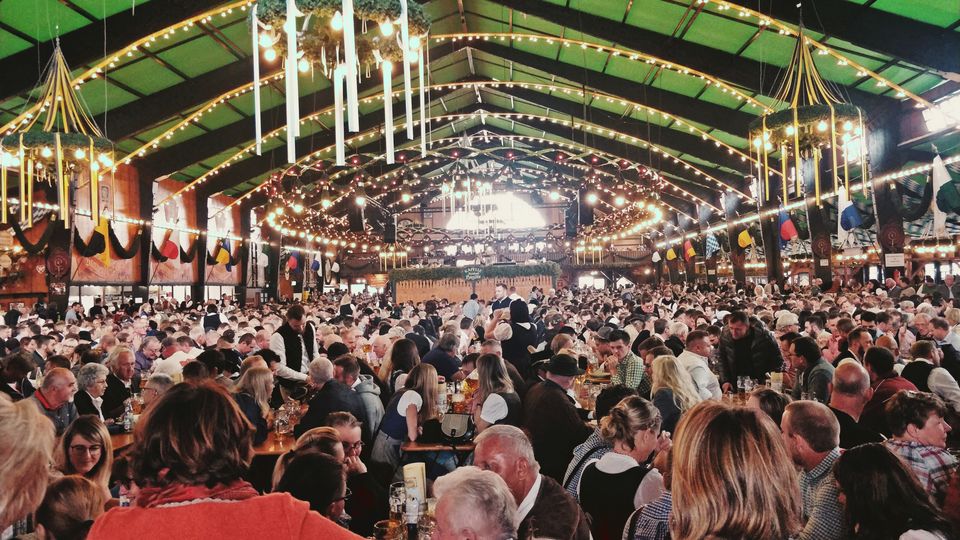 Oktoberfest is the world’s largest beer festival held annually in the city of Munich, Germany. The festival originally organized to celebrate the wedding of Bavarian Prince Ludwig to Princess Therese in 1810 has evolved to the now known beer festival and is celebrated with the same grandeur in Munich as well as other parts of Germany. The festival is hosted for about 16 to 18 days starting in late September and goes on till early October. The entire city can be seen bustling with the festive vibes during these days.

How to reach Munich?

Munich is well connected by Eurail. In case you are traveling for a longer duration in Europe, it is advisable to avail a Eurail Pass. The other popular means of travel in Europe would be buses. Deutsche Bahn(DB) buses, Flixbus and some other service providers connect the major cities of Europe. As I was traveling from Prague, I had availed a DB bus with Eurail at 5 Euros. Budget airlines are also an option if you are traveling light.

The city has plenty of hotels as well as backpacker hostels if you are looking for a budget stay. But one needs to book a few months prior because of the surge in bookings close to September. I stayed at Hostel Haus International, within a reach of 5 km from the fest ground. The fest is hosted in Theresienwiese fairground, named after the princess. The city is well connected with S-Bahn (covered in Eurail), U-Bahn (underground trains), and city buses.

The first hints of the Oktoberfest hit you as soon as you land in Munich! The train stations are full of people dressed in traditional wear. The scent of fresh gingerbread and pretzels being baked around gives out the vibe instantly!

The traditional Bavarian outfit for the Oktoberfest is Dirndl for women and Lederhosen for men. These just add to the colors of the festival and you can spot almost everyone dressed up for the event. These would be available for purchase in the city during the fest but the prices vary widely. They are provided on rent as well. The Theresienwiese fairground located in Munich turns into a festive place altogether during these days. Shops selling gingerbread, pretzels and hot dogs can be seen all around the place. There are fun rides such as Ferris Wheel, Roller-Coaster, and Skyfall to keep you entertained throughout the day.

The main attraction of the fest, Beer, is served in so-called ‘Tents’ spread around the ground. These tents have been traditionally hosted by families and local breweries and the tradition continues. There are about 17 large and 21 small tents in the ground serving different varieties of beer. Seats in most of these tents can be reserved at a charge but one can as well walk into the tents without reservation. It is recommended to reach the tents early and avoid weekends if you are to choose the latter. Entry into these tents is usually restricted in the evenings due to the huge crowds and most often because they are completely occupied.

While I had spent my entire afternoon in the ‘Augustiner Brau’ tent, belonging to the oldest brewery in Munich, some people also prefer to hop across multiple tents. Once inside a tent, make sure to settle down comfortably as it can get long before you leave. The afternoons are usually quiet and the celebration builds up as the day passes. Beer is served in steins or a ‘Mass’, as they are traditionally referred to in Germany. These are huge mugs of 1-liter measure and are typically charged around 11 Euros per stein. The beer is served by waitresses in traditional dirndl and the custom is to tip them every time you make an order. Roasted Chicken, Pretzels, and other food items are available in the tent depending on the menu of each of them. Make sure you have enough food before you start drinking because it will be a long happy day!

The beer in my tent was from the ‘Hirsche’, the traditional wooden barrels, and was mild and perhaps the smoothest beer I have ever had. The kind of music within the tent changes depending on the band they have been traditionally hosting. My tent had a traditional Bavarian band. Late in the afternoon, people stop sitting on the benches, rather stand on them and start dancing. The best feeling of the evening is when the entire tent starts singing the Oktoberfest song – ‘Ein Prosit’ at regular intervals. The atmosphere of the entire tent turns out very social and friendly at this point. You can see people standing atop the benches with the steins in their hands and swaying to the music of the band. Yet another important part of Oktoberfest is to make new friends. People from across the world come down to Munich and this is one of the best places to make new friends and socialize.

While the event goes on till late in the evening, make sure you stay safe and be responsible while you drink. One could get easily thrown out of the tents if they were to create nuisance. But whether you drink alcohol or not; if you are a beer lover or otherwise, it is once in a lifetime experience to be in the Oktoberfest. Cheers!