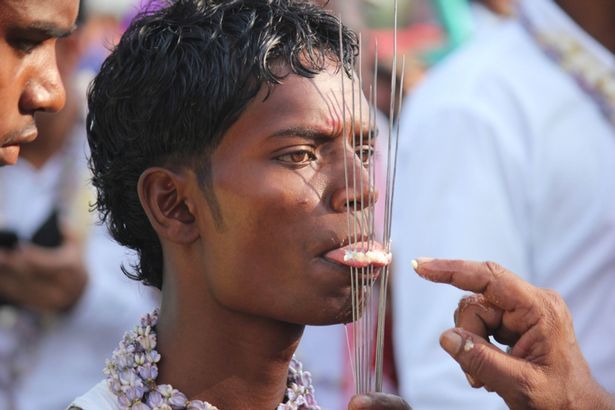 India is the land of culture and multitudinous festivals. Anyone would face difficulty in counting as list of festivals goes on & on. West Bengal (India) and Southern Bangladesh witness many festivals in common. One such common Hindu folk festival is "CHARAK" (a.k.a Nil Puja). This festival is celebrated every year in the month of April and a day before Bengali calender's new year (Poela Baisakh). In this festival, Lord Shiva is worshiped along with Goddess Kali in their multiple incarnations. People especially worship Lord Shiva to end their regular suffering & past year's sins and bring prosperity, good health and happiness to them. Devotees walks from one village to another in search of Bhiksa (alms) for celebrating the 3 days of CHARAK festival.

I work in a reputed Telecommunication Company as an Operations & Maintenance Engineer and currently posted in Behrampore, Murshidabad, West Bengal. As Murshidabad district of West Bengal is a close neighbor of Bangladesh, so I was lucky to experience such a rich-cultured folk festival full of thrills, dangerous acts by professionals, and allured celebration for 3 continuous days in.

Two local colleagues of mine took me to their club to show how the festival ritual starts as they were aware of my little to nil knowledge about CHARAK. I saw huge amount of crop varieties occupying almost 2 rooms of a house which would be used in these 3 days for various rituals. There were many people doing their respective works like playing dhaaks (musical instrument), many people were busy doing make ups on themselves to get in to a incarnated form of goddess Kali & Lord Shiva and few were busy with pre-ritual works. Everything was new to me and it felt like I am in some other country, witnessing a never seen folk festival of that country.

Every festival in India starts as per astrological time irrespective of midnight or noon. In this year, Charak festival started around midnight. As the clock hands matched the astrological time, everyone's attitude had a sudden drift and it narrowed down to one line of happiness- CHARAK PUJA begins and it felt like second Durga Puja for Murshidabad's people. People from age of 40+ down to 10, all were dressed up like Goddess Kali & Lord Shiva and started entertaining by dancing and singing and praying. 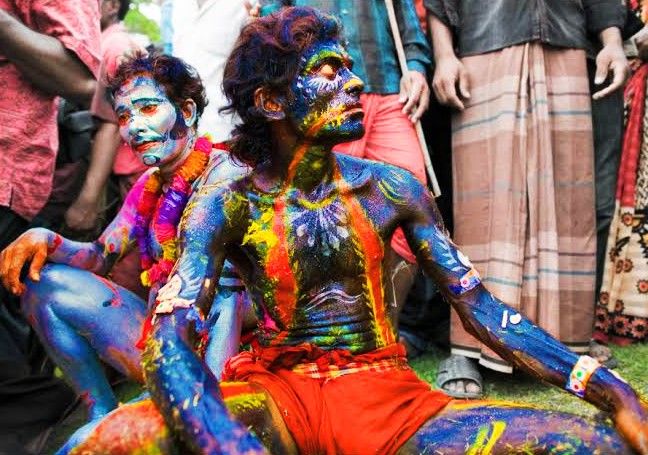 It was a total bliss, witnessing such a unique festival. All were heading towards Hindu Cemetery Ground (Samshaan Ghat) for their full night rituals of DAY 1. Yeah, it came to me as surprising as you would get, spending a night at cemetery.

Around 5:30 am, after completion of the rituals at cemetery, everyone with red-eye and tired body went back to their respective homes just to return fresh and alive within hour or two (it's CHARAK, fellas).

Second day started with a bang. We had our breakfast with sleepy eyes in club only. After having food, I asked my friends to take me to room so that I could get some rest but they ignored by saying, buddy this is the time and day, you'll get to see the thrilling acts. 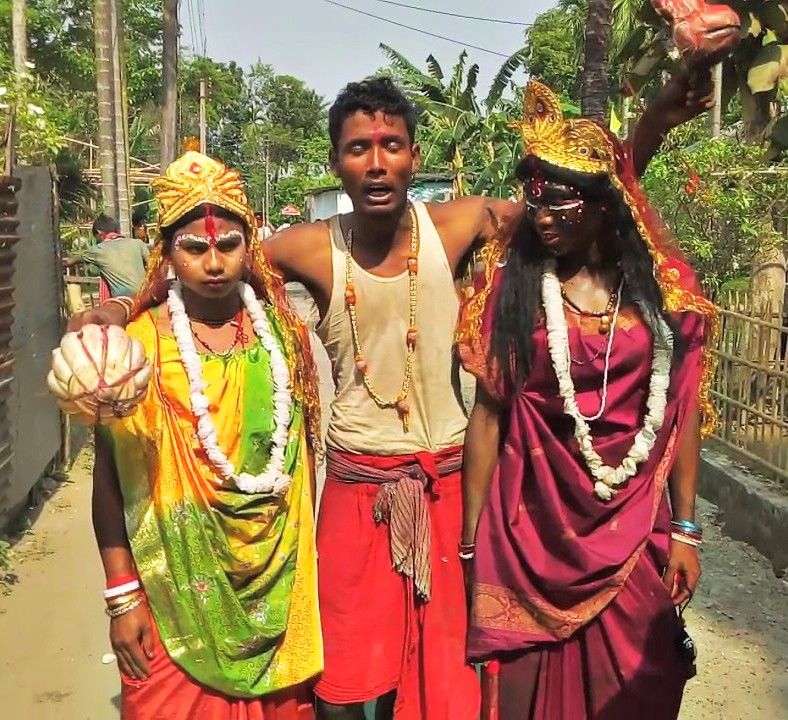 Time was around quarter past 7 in morning and roads were lit again with colors, crackers and insane celebration. I was completely astonished by seeing an empty road getting full within couple of minutes. People not familiar to each other are throwing colors on other people, singing altogether, dancing gracefully and these views were truly mesmerizing. 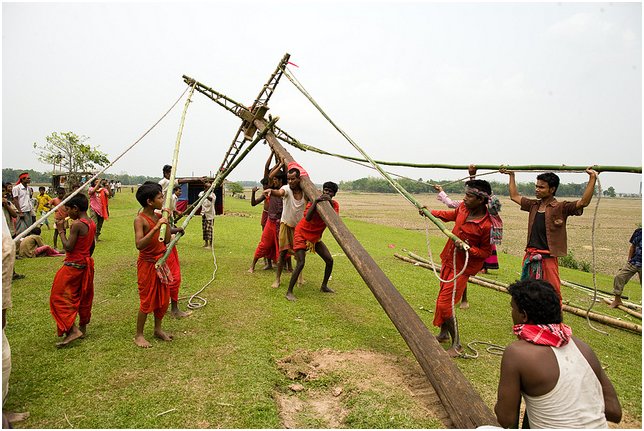 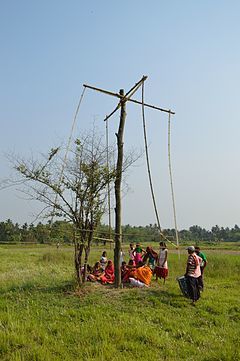 It was evening and we headed towards a big Mela (fiesta) of Behrampore where the mindbogglingly acts was about to take place. The main attraction of fiesta was a big thick CHARAK TREE STEM with a another thick wood attached on top (a plus sign) . Two hooks were hanging downside tied to long thick ropes with extreme ends of plus shape top tied to another end of that rope. 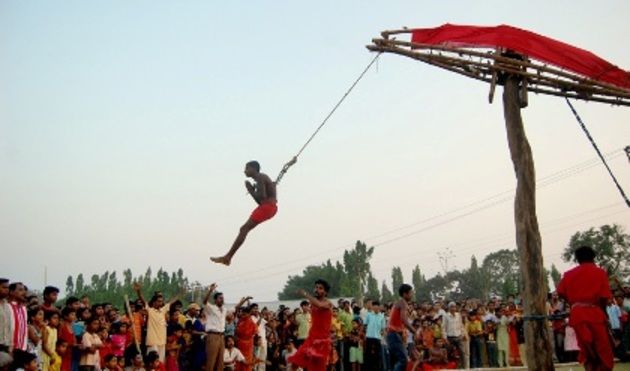 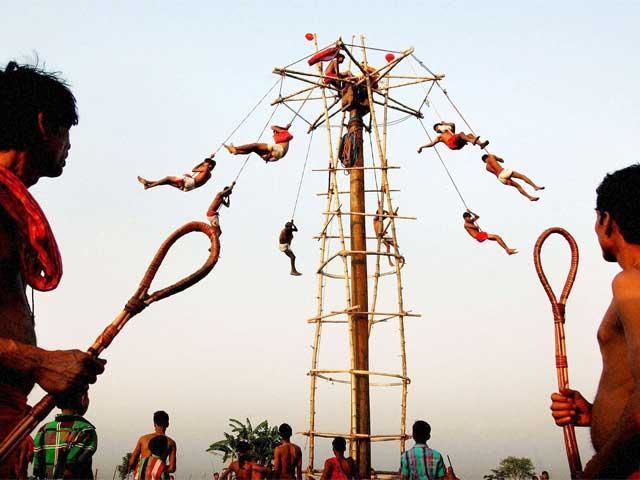 My friend asked me to have patience before I witness an unthinkably difficult act done by professionals. As I was allowed backstage (actual friends with benefit), I saw 2 devotees were applying ointment in their back. Then 2 other practitioners helped them with piercing a strong sharp hooks to their bare backs. Most interesting and curious part is they pierce those sharp hooks without any deep cut or spilling a single drop of blood. Actually with years, practitioners' skills become so meticulous, they can pierce these sharp hooks without damaging vein with minimal pain. 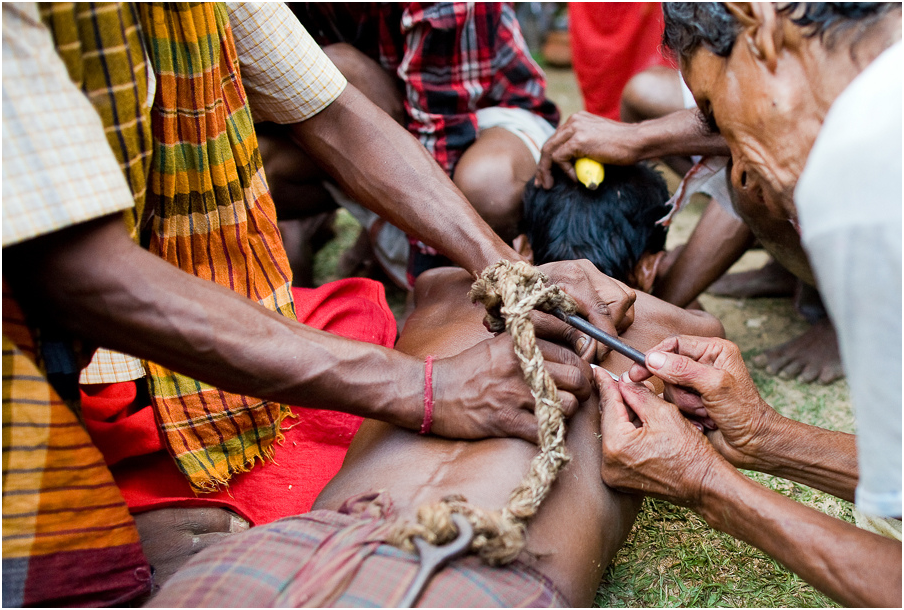 The act need performers' physical as well as strong mental fitness but more important is supports given by viewers by cheering and shouting Lord Shiva's name. Now, what I saw is, the hook held devotees are flying in a circular path by the ropes fastened to the Charak Tree (10 m in height) on one end and the sharp hook on the other. This circular path is repeated many times and those performers were seemed to be in trance state & had no intentions to get down soon. In this process even few performers in other fete, fell from great heights but no critical injuries reported till date (as informed by my friend to me).

It is believed that such serious act actually functions as a role-reversal for men attempting to bear the pain that women experiences during womanhood and child birth. 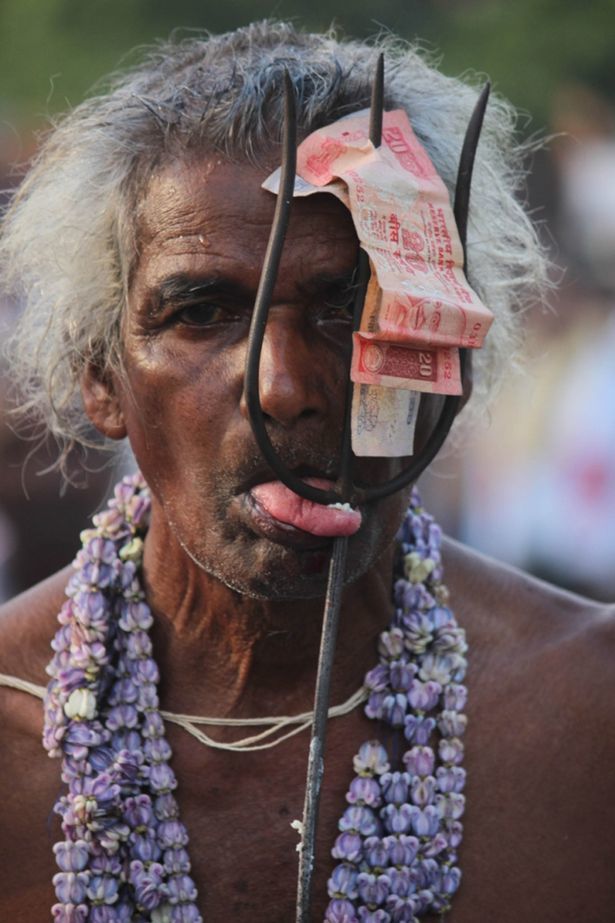 We even saw other independent practitioners got their tongue pierced with 2 or more long needles and roam around the fiesta while sitting on the shoulders of other devotees. You'll get to see multiple types of sharp objects pierced in different parts of the bodies of various practitioners.

Third day was normal and it repeats exactly what DAY 2 witnessed. This extra day in hand is kept as many followers unable to see such acts in 2nd day of Charak, so devotees repeat those thrilling acts for 2 days in a row. Even in few places or clubs, such acts from day 2 takes place only in 3rd day of Charak Festival.

It is kind of weird how devotees still believe giving pain to themselves will bring happiness and prosperity to their tribe. But devotion to god makes them strong, thus getting a happy and healthier life. If you want to witness such a thrilling festival then remember the dates ;-)