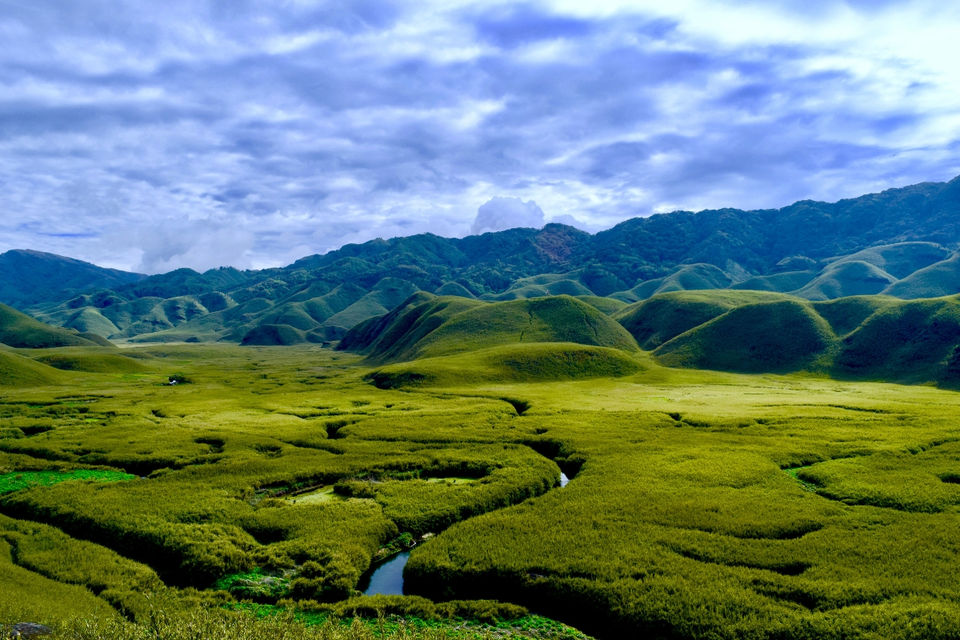 It was already way past evening when we were still strolling towards the guest house ahead of us, which appeared closer than it really was through the winding hills. It was drizzling and the narrow terrain we were walking on was getting sloppier each passing minute, making it slippery with puddles of mud water unusually large and stretching all the way towards our harbor. The chill of the valley was getting in our skins with the swift breezes and the drizzles. I couldn't help but recall the stories of the valley, of how cold it could be all round the year. We had planned for this trip, way back, thought of all the things we needed to stay as comfortable as we could. And even before we actually got to the valley, we were receiving instincts within us, a feeling of disappointment, loss of enthusiasm, because of the weather we encountered. It was not breeze and chill now, the cold of the valley had already crept into us through the garments we had on, soaked and dripping. Shivering as we took each step with careful selection less we slipped and tumbled down the hill, and by the time we finally made it to the guest house, it was pouring bullets. We cussed and cursed not at the valley but at ourselves for picking the perfect weather to visit the magnificent Dzukou valley. It was getting dark now, and we had to decide quick before we lost total sight of ourselves. Decide whether to go down to the valley and crash in one of those caves we had long planned and anticipated. We dreaded at the very thought of it, to walk through another natural corridor of mud puddles over pouring rain. We were pale as ice slick with cold water staring at each other, unable to find a word virtuous enough to either stop us or to take us down the valley. Enough gazes and bewildering laughter had been exchanged when two of us finally gave the slogan "do or die", to seize our night deep in the vale where nature lies in beauty. And thus we marched down not knowing what nature had kept waiting for us, a hearty treat of wilderness... (to be continued)

Earlier... this is the point we landed on right after approx four hours of trekking from the foothill of Jakhama. First time for all four of us, on top of that we had no trekking experience of this kind ever. Climbing up the foothills of Jakhama was a formidable exercise... You know it is better to take the next foothill of Viswema if hiking of this sort isn't your piece of adventure. But we did it and so can you... Stopped at places more than necessary, lost our way until after an hour we found a trail recently used and took it hoping it led to the top, and it did. We have not much to say about the trekking other than that at places it is really steep surrounded by the sounds of rushing water and creaking insects. However, what we can say is that the last part of the climb is the steepest, as though you are taking a vertical ladder... But the panoramic view it presents right after the last leap is unbelievable. It is not the actual valley yet but you see the beginning of a radiant winding row of hills and low plains far in the distance urging you to see more...

... (continuing) We decided to take downwards the deep of the vale and playful to us the rain stopped for a few graceful minutes until it came pouring down again colder than the last time. Before moving, we sighted a cave down in the plain of the valley and planned to cave in there for the night. But to our horrors, that home of a stone we longed for to place our weary selves was a splendid 2 hours stroll through ankle deep muddy waters at certain places and raining winter. Oh! We looked back more than once to see if the guest house was nearer than that beckoning boulder of a home down in the vale. But by our fate we were far in between if not only nearer to the wilderness. Within the span of our hike down the rain stopped and returned at it's own pleasure placing us in confusion between being jubilant and despair. The valley looked beautiful when we glanced at it from the top but now we were in the midst of it's beauty captured and engulfed; the vastness of the valley apprehended us as we went deeper, and it's wilderness welcomed us as we pulsed and gasped with wonder at it's colossal size. It took us forever to get to the cave we sighted from the top. By the grace of the valley we were here already and yet again by it's mystery the camp had already been taken by two couples who were snugged inside their camps... nature knows how pleasurably comfortable they were inside while we were drooling all over in a platform so enormous and open. We stood there for a mad ten minutes until deciding again to go forward in the wild for another cave we think we saw earlier! We marched on only to be taken aback by a stream flowing with great rush we gave up the idea of crossing it. We have thought about it later back at home what would have happened if we tried to cross the river, shrugged at the thought of a life lost. Good for us we retreated from the thought of crossing it and recalled the sight of a cave we spotted earlier up the hills. By now we were drenched of all our strengths that one of us even let out the thought of just retiring the night in the open! An appalling thought to which we had a good moment of laughter because we had no tents, meaning we couldn't camp anywhere other than in a cave because all we carried was a roll of waterproof sheet and a score of wool. We summoned all the courage and strength we had through the ghastly stretch of darkness all around and started marching up the hill for an another excellent hour...

We finally made it to the cave, organised and arranged for the night as fast as we could. The night was still young but it was dark enough not to fool around with the kind of weather that prevailed and the sky covered by a massive spread of clouds casting an overwhelming shadow over the whole region. The best part of the camping was that it kept us awake most of the night because somehow the water found it's way inside our camp soaking all our blankets and mattresses. Two of us could manage to steal a pleasant two hours of sleep in the midst of the water thanks to a bottle of spirit we were thoughtful enough to carry despite hesitation. We still today have no clue how the other two fared that night while the two of us kept ourselves warm. We were awake by 1 am in the morning already curled up in a corner where the water couldn't reach us by a perfect bonfire. We recalled together the experience of the night before, how hideous and challenging it had been despite our expectations. We prepared coffee and waited for the sunrise to heal us of all the negative impressions that had been cast up till the moment. The sun took it's time but it sure did come up and relieved all of our tension and failings. We saddled up once more for the journey through the valley in the bright sunlight towards the common guest house at the top. This day the weather was perfect with the whole valley beginning to glow in the ray of the sun. Taking our time we got to the top, cooked and had the most pleasant rice and smoked pork lunch sharing it with two other tourists we had earlier crossed paths during our trek up the Jakhama foothill. Lucky for them that they hadn't brought any ration for themselves because we were left with a good amount of meat and rice at the day of our departure. We left our ration which they received with great pleasure. We had a pleasant time together, exchanged phone numbers, shared experiences busking in the grandeur of the valley.

It is now two years since that ghastly night in Dzukou valley. It was all so terrible at the moment of the expedition that night but we have had enough time to look back now. Enough time to realize how enriching an experience we had in the valley. We were given the experience of a life time. We lost and found ourselves in the deep wild and also got to catch the beauty of the Dzukou Valley. Who would have thought how wild a night like that could prove to be the most memorable experience one could have. Anyway, this is our trip in the valley I thought worthy of sharing... If you are planning a trip here, come prepared and you'll have a wonderful time.