Mountains and the Milky Way - @ Annapurna Base Camp 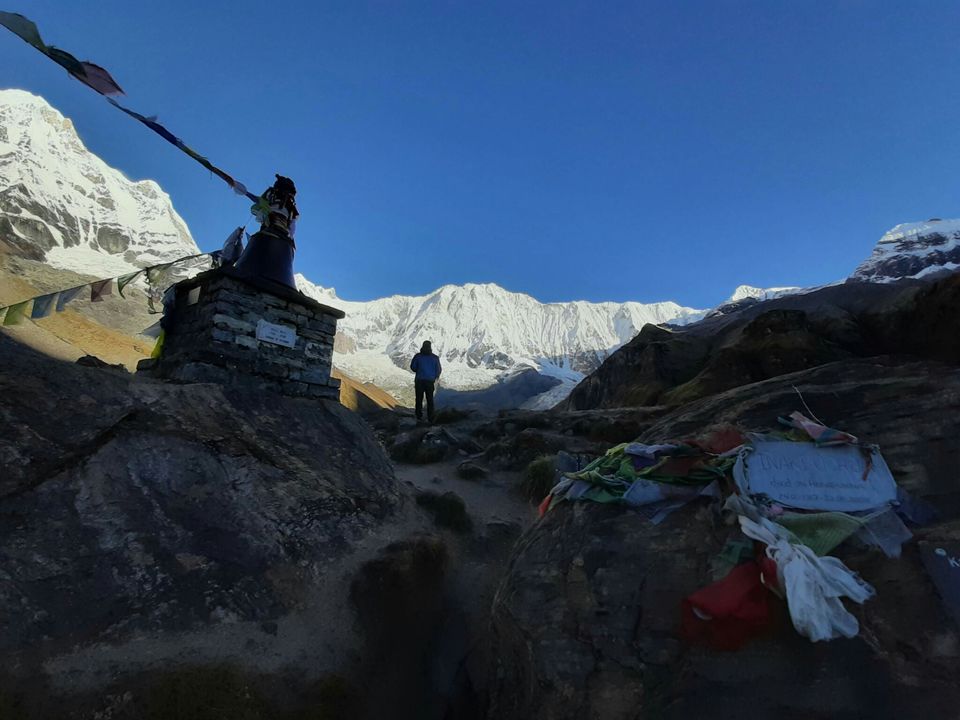 The day could not be more apt for travelling. As luck would have it, it was on September 27 – World Tourism Day - that we made our first stride towards the Annapurna Base Camp (ABC). The usual tardiness of one of our friends meant our angry asses hopped into a micro-bus at only around 4:30 pm rather than the planned 3 pm. To add insult to injury, the typical lengthy procession of vehicles immediately after crossing the Kathmandu Valley delayed us and so, we reached Pokhara only at midnight.

We started late the next day. We took a taxi to Hari Chowk (in Pokhara) from where buses and jeeps can be found to Ghandruk, the intended starting point of our trek. Unfortunately, very few vehicles left for Ghandruk that day due to the poor road conditions caused by the extended monsoon. After dallying for vehicles for about an hour, we got on a bus scheduled for Beni and decided to get off at Nayapul and find a vehicle for Ghandruk there. In Nayapul too, things did not go as planned (they never do!). No vehicles for Ghandruk. We were not prepared for this scenario. It was past 12 pm. A walk to Ghandruk would take almost 5 hours where we would have to make a contingent stopover for the night rather than reaching Chhomrong where we anticipated staying.  Luckily, we found a jeep for hire which would take us to a small settlement called Matkyu from where we could reach Chhomrong via a shorter route. After some bargaining with the driver, we got on the jeep and after nearly 3 hours of treacherous rocky ride beside the growling Modi khola, we reached Matkyu to find a hot thali of dal bhat waiting for us.

With full stomach and renewed energy, we began our trek. Our cell phones started capturing the hills and the clouds around us (not to forget numerous selfies and wefies). The monsoon had created quite a few numbers of waterfalls on the opposite hills. An hour into our walk, we saw a long bridge (287 m in length which takes almost 5 minutes to cross) in the distance with a small village atop. We correctly assumed the village to be Jhinu where we threw our bags at the very first sight of a resting spot. We knew our tired bodies had given up. It was only 4 in the afternoon but we called it a day.

Jhinu amidst the hills 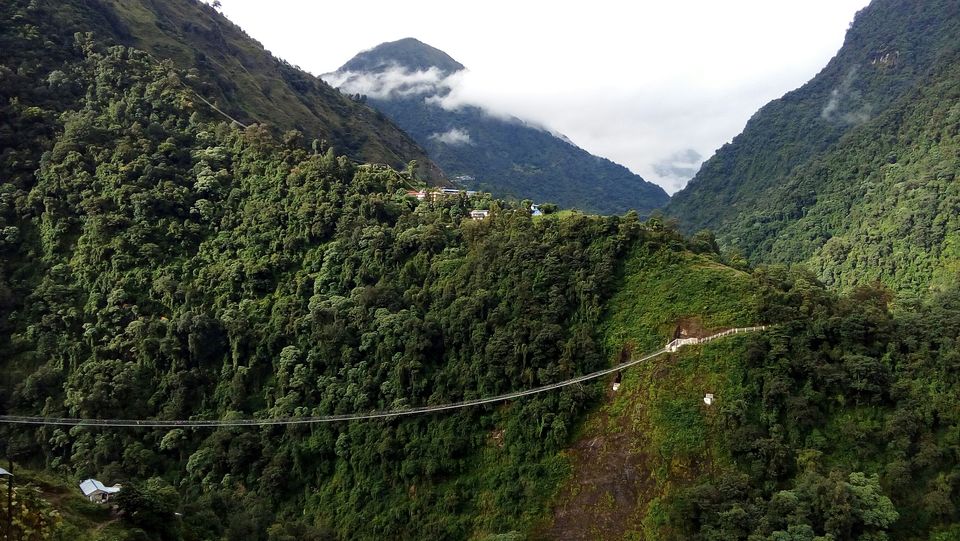 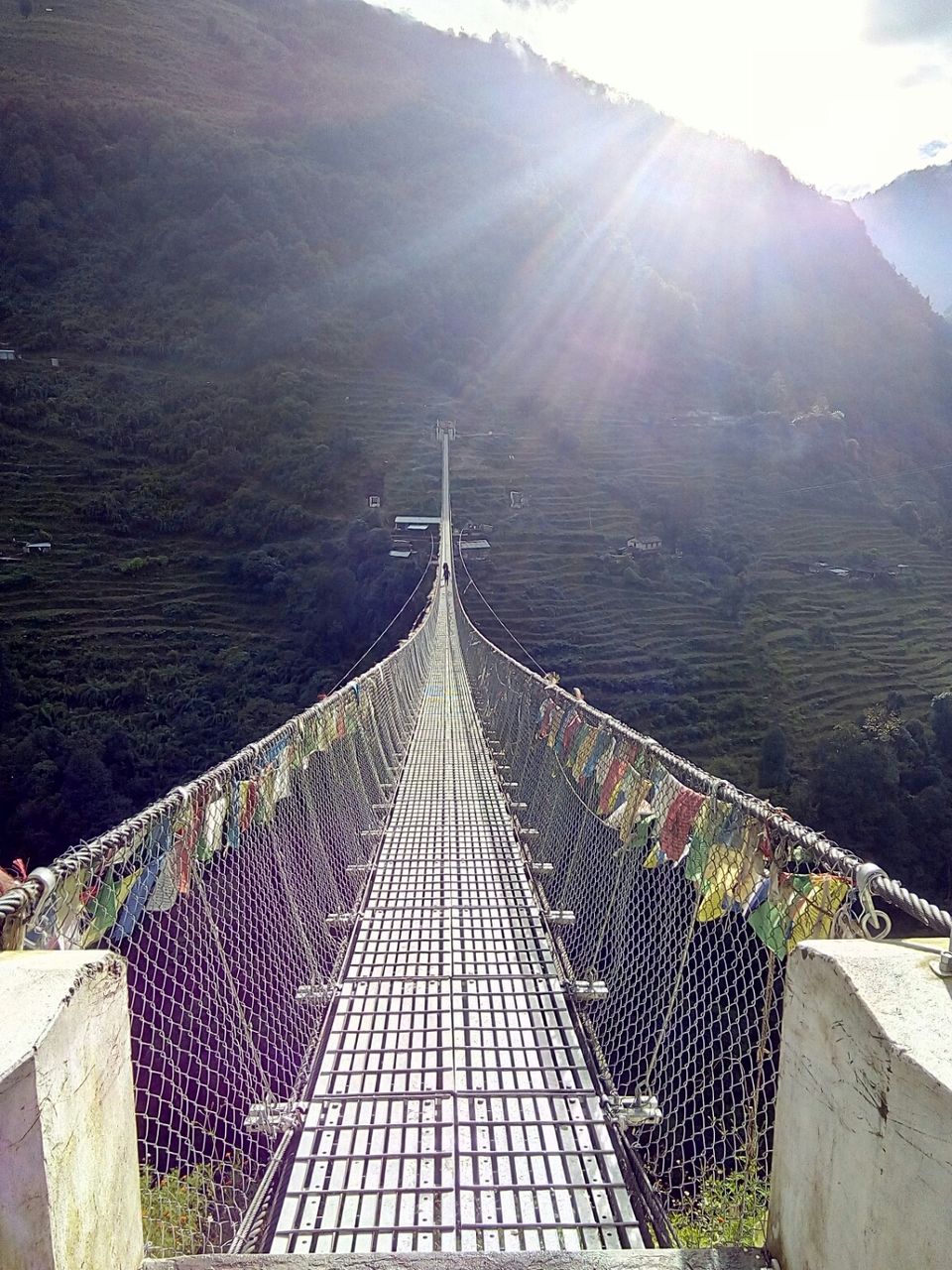 There was a pressing need to start early the next day and so we did. As the day began, at 6 in the morning, we climbed the well-laid stone steps on the steep hills to reach Chhomrong at just past 7 where we had our breakfast. This is where we got a glimpse of the Annapurna. The glimmering white mountain peeking out from the greyish clouds with the lush green monsoon hills underneath the layers of cloud – it was sight to behold. Nonetheless, Annapurna South was adamant on playing hide and seek with us. So, we moved on through the village of Chhomrong to reach Upper Sinuwa in about 2 hours where we refilled our water bottles. This section of the walk includes walking up and down the hills mostly through the rural villages of Nepal. Just when we were about to reach Bamboo, it started raining.

After a hearty lunch (dal bhat, of course) we resumed our walk – in the rain – which had gotten bigger as we were busy devouring our lunch. Luckily for us, we had our raincoats – or so we thought. With further steps, the rain only seemed to get bigger and bigger making the trails wetter and muddier. Walking in the rain made it difficult to enjoy the waterfalls and the jungle, as it would otherwise have been. Each hour of walk drenched us more. I had been walking a little ahead of my friends and therefore, decided to wait for them by a spectacular waterfall, a mere half an hour walk from Himalaya. As told, the waterfall can be seen falling from way high above on a clear day, as it cascades from one cliff after another, somewhat forming layers. However, even after 35 minutes of waiting beside the waterfall, my friends were nowhere to be seen. Hence, I made my move towards Himalaya in hope that I would meet them soon. As I approached Himalaya, I saw one of my friends drying his clothes in the veranda in one of the tea-houses. Apparently, they had taken a shortcut suggested by one of the locals. What a relief! A quick glance at ourselves and our belonging revealed our clothes and backpacks to be damp, and with them our spirits.

The river roared and the rain poured. We sought refuge over the warm dinner and not so warm bed at Himalaya. Fortunately for us, the rain stopped long before the morning and we had some functioning clothes which we assumed would be enough to carry us through to ABC and back.

The village of Chhomrong as seen from the opposite hill 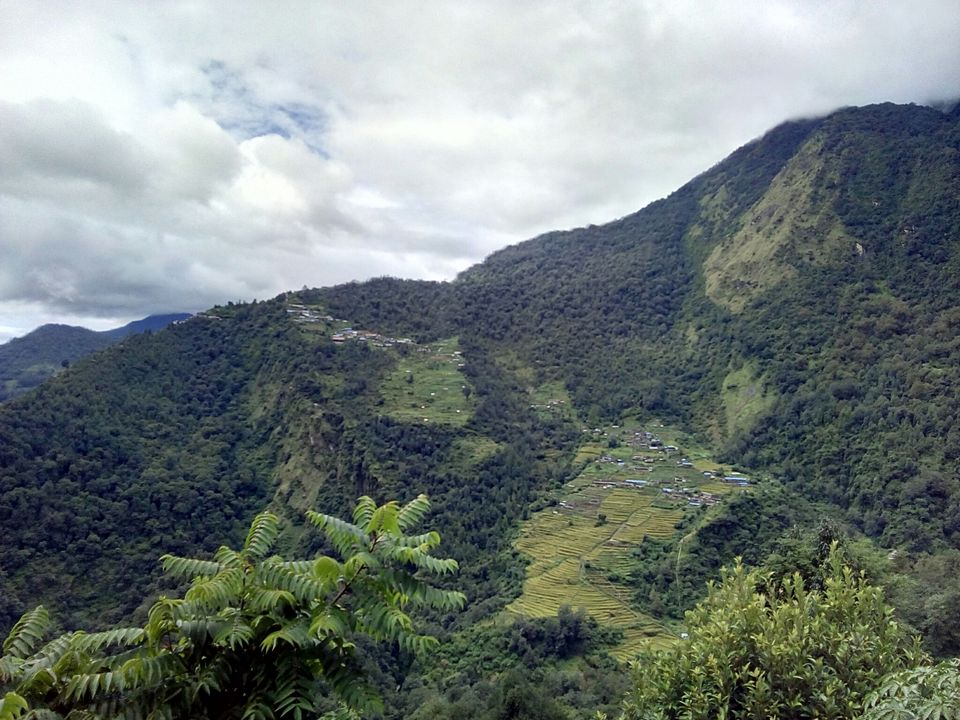 Waterfall beside the trail 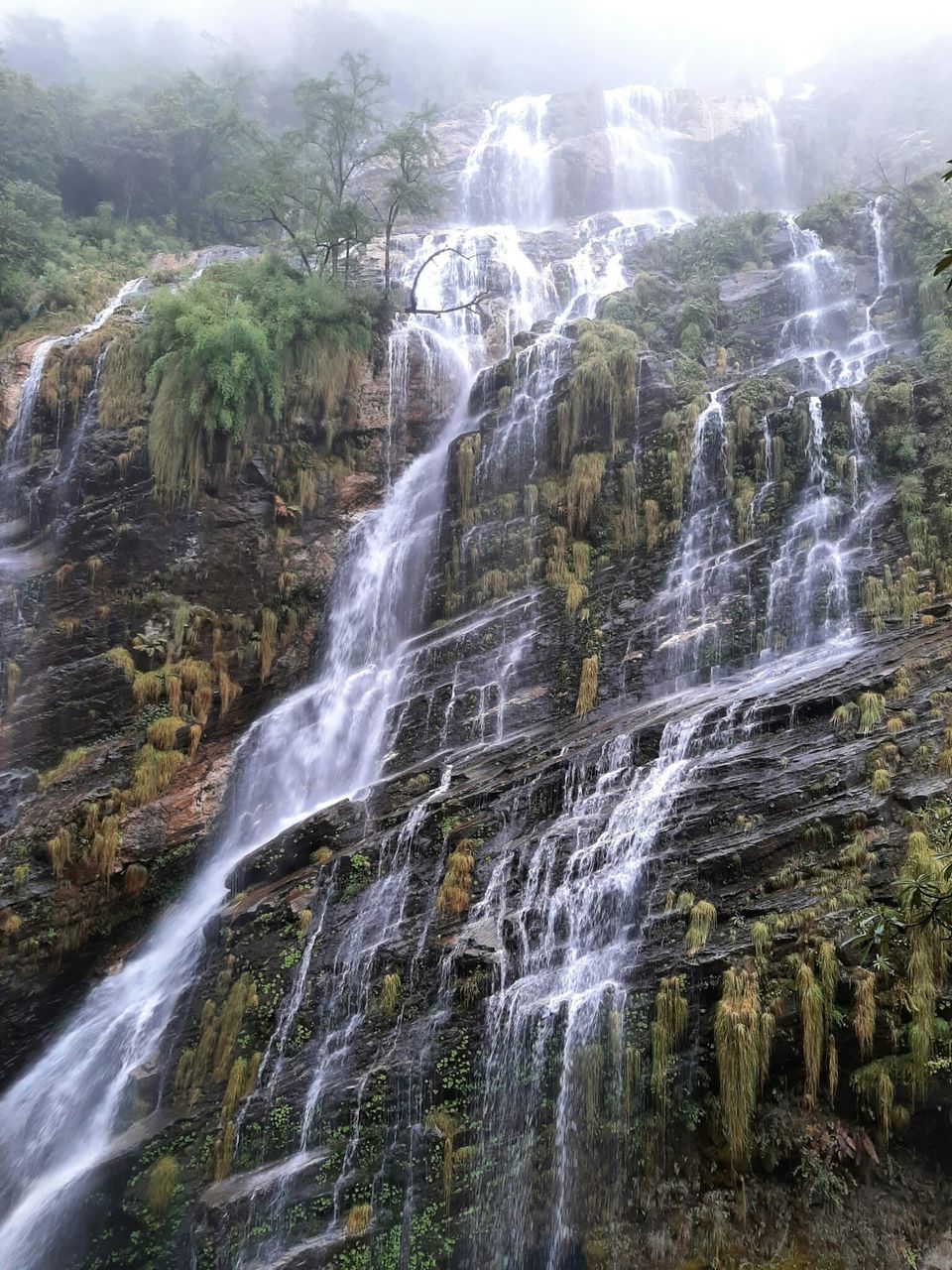 The next morning brought with it clear blue sky. We ascended gradually to Deurali for the first hour or so and continued on our way to Machhapuchhre base camp (MBC). The walk to MBC felt particularly serene under the morning sun. We began to notice the landscape changing. Trees and forests were replaced by small grasslands and the narrow gorges turned into a small valley. On the way, we encountered a small cave which had been covered by sheets of ice. We temporarily stopped at MBC for lunch. By the time we reached there, the warm morning sun had made way for grey clouds and fog and we sensed the rain coming. Amidst concern of the incoming rain, we hastened our ascent to the base camp. Despite being hit by a mild shower, we managed to make it to the base camp unscathed.

It was dark. The temperatures were plummeting as the sunlight began to fade and the night grew. Clouds were beginning to disappear making way for the stars to shine. The mountains glistened, even in the dark. The stars filled the sky – from one horizon to the other. The Milky Way took centre stage. Shooting stars added to the spectacle. We revelled in the star gazing. The clouds began to shut the show down; we made it to the comfort of our warm blankets inside the room. 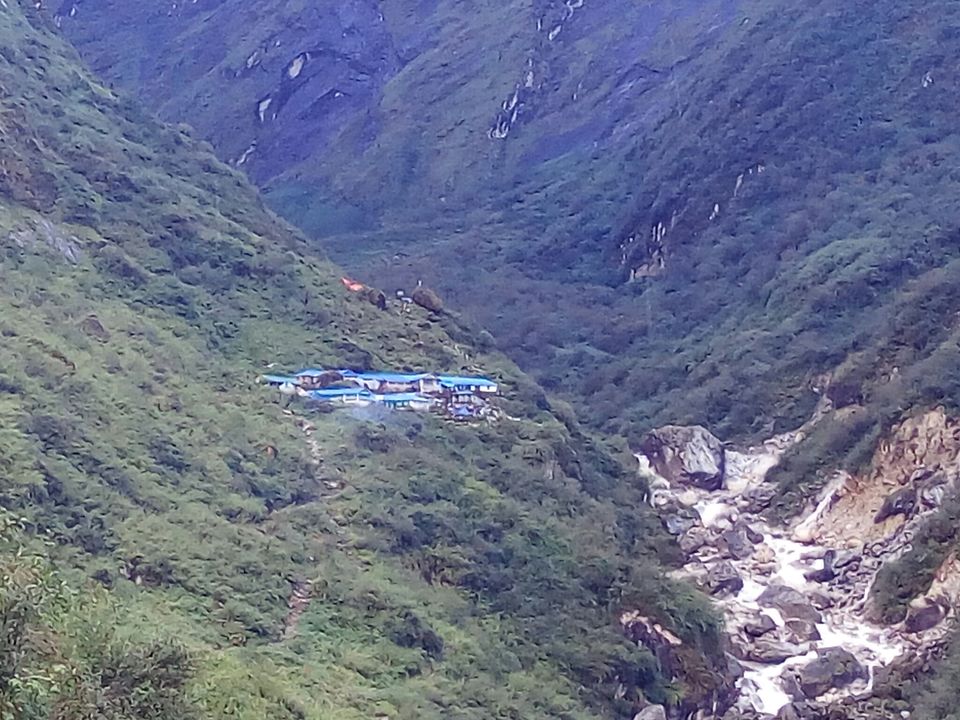 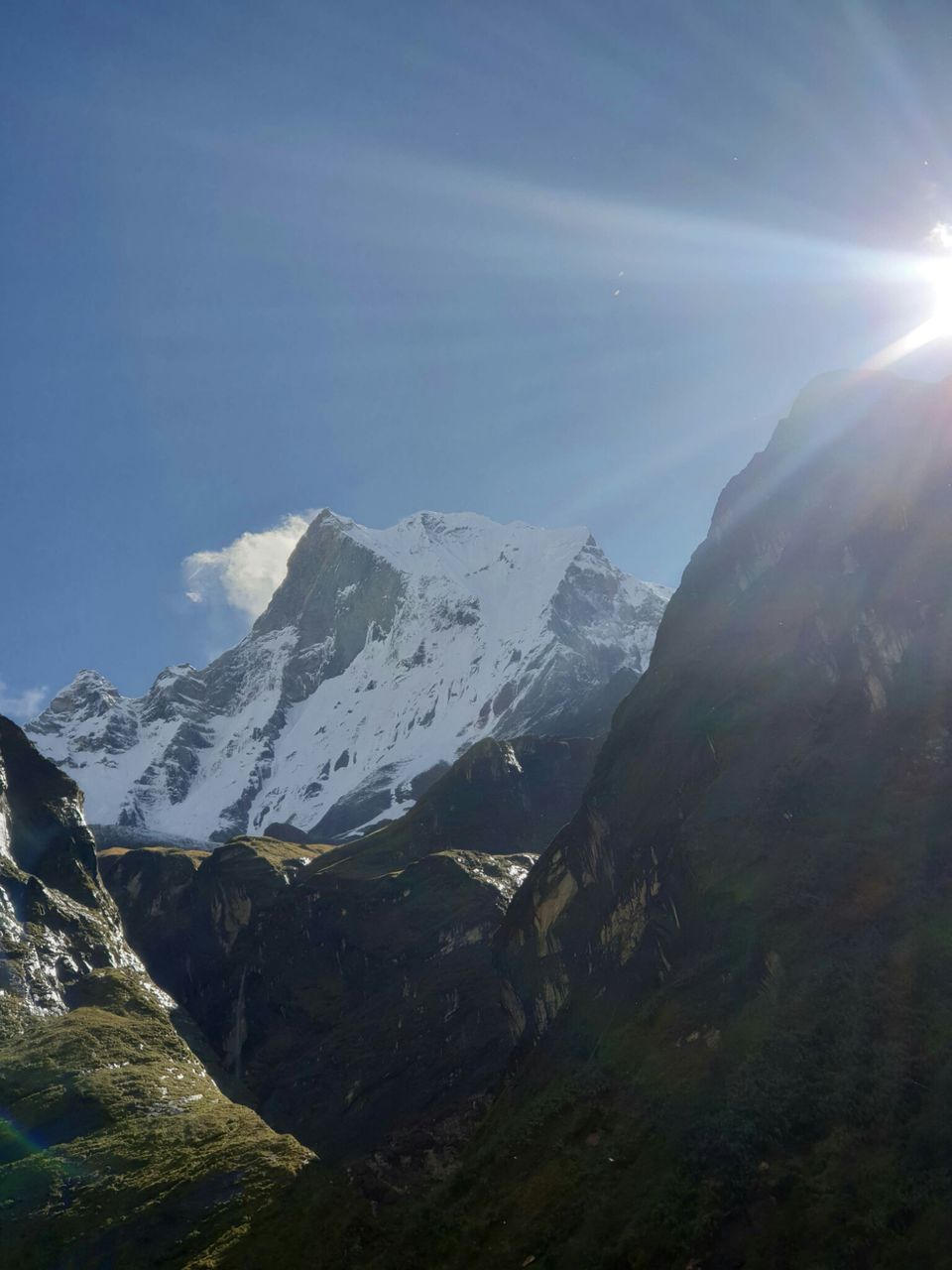 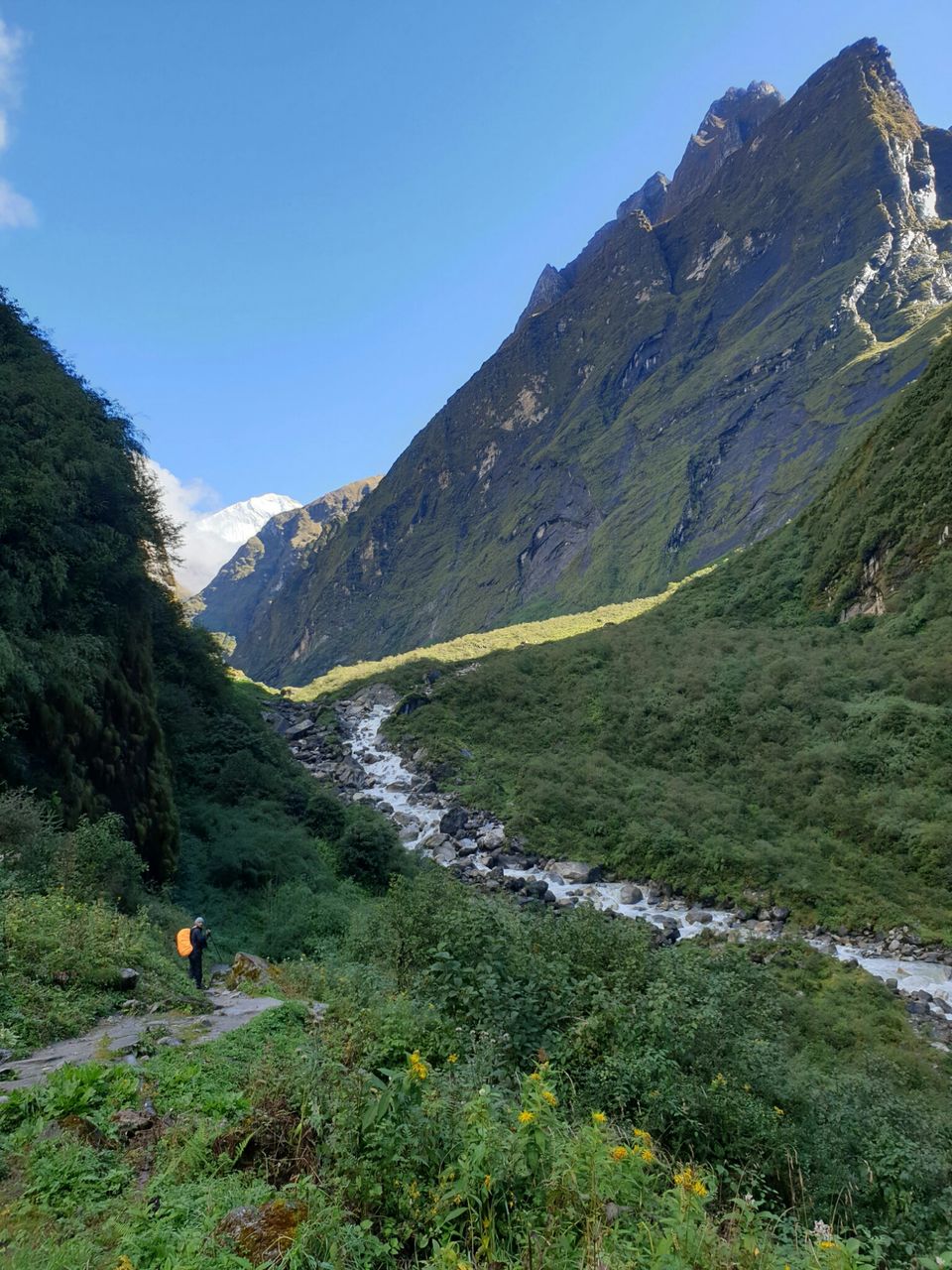 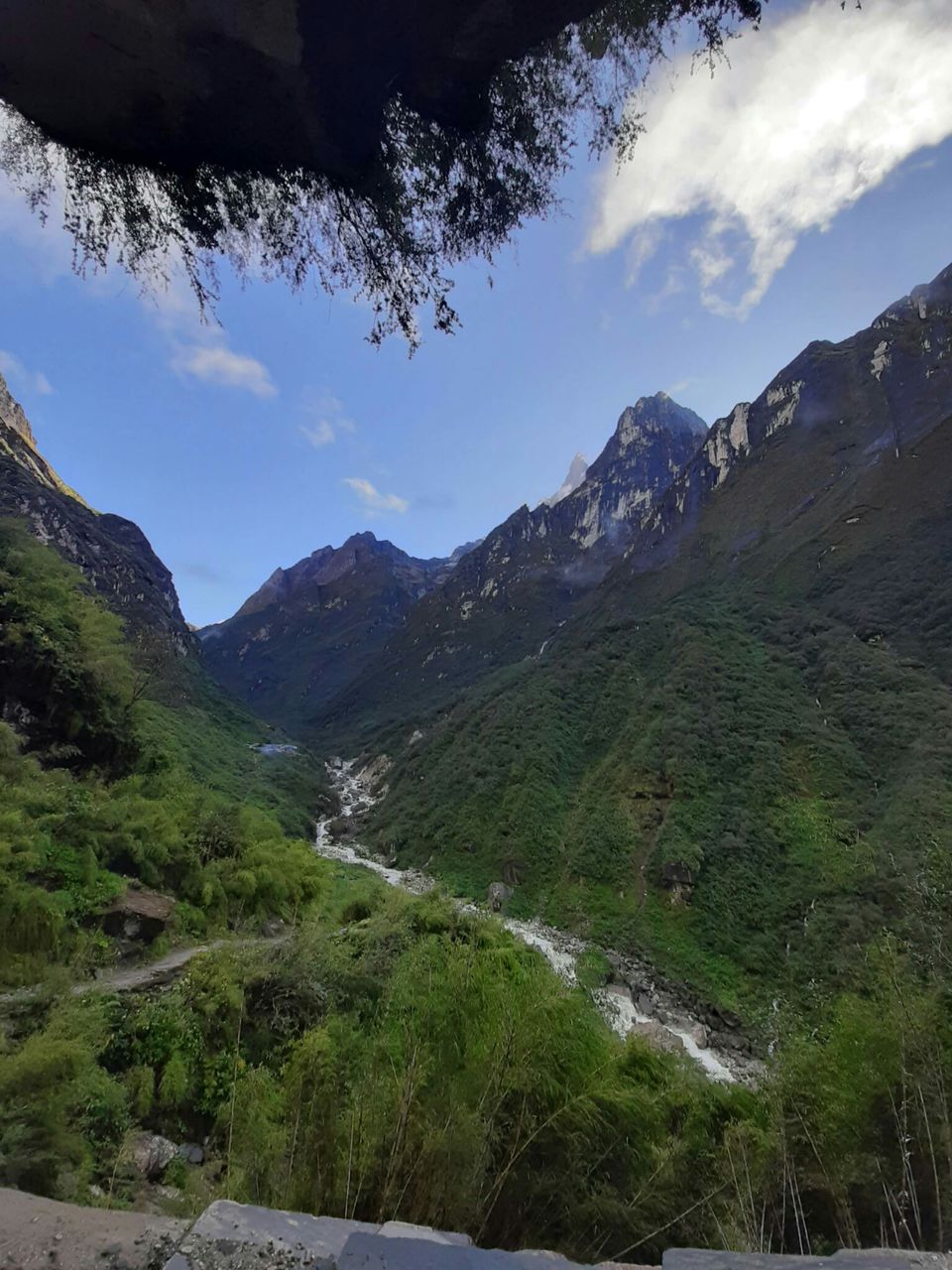 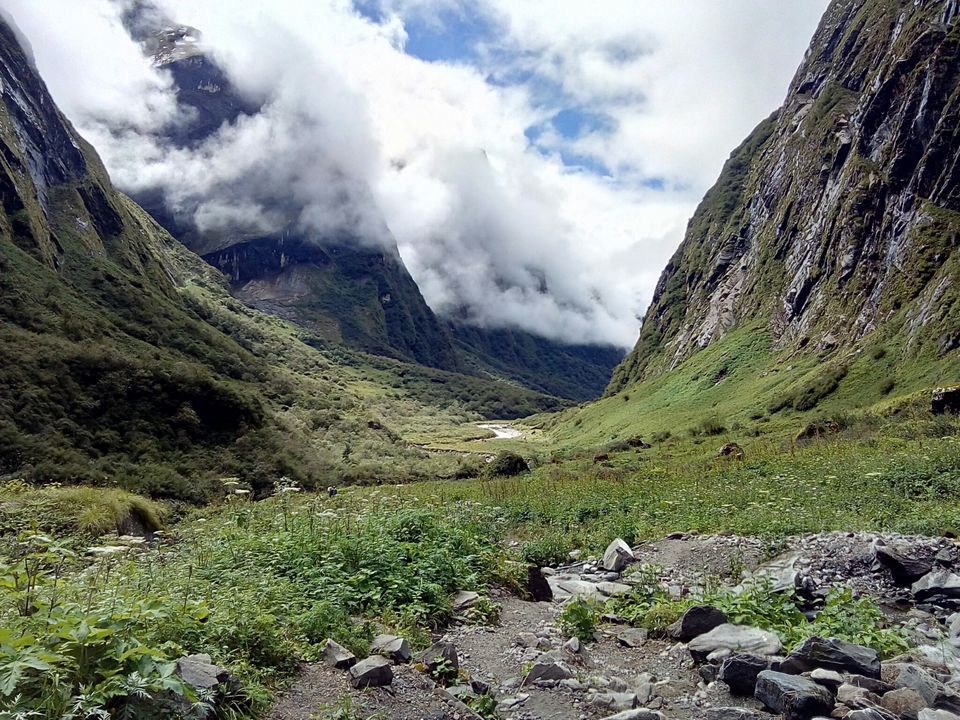 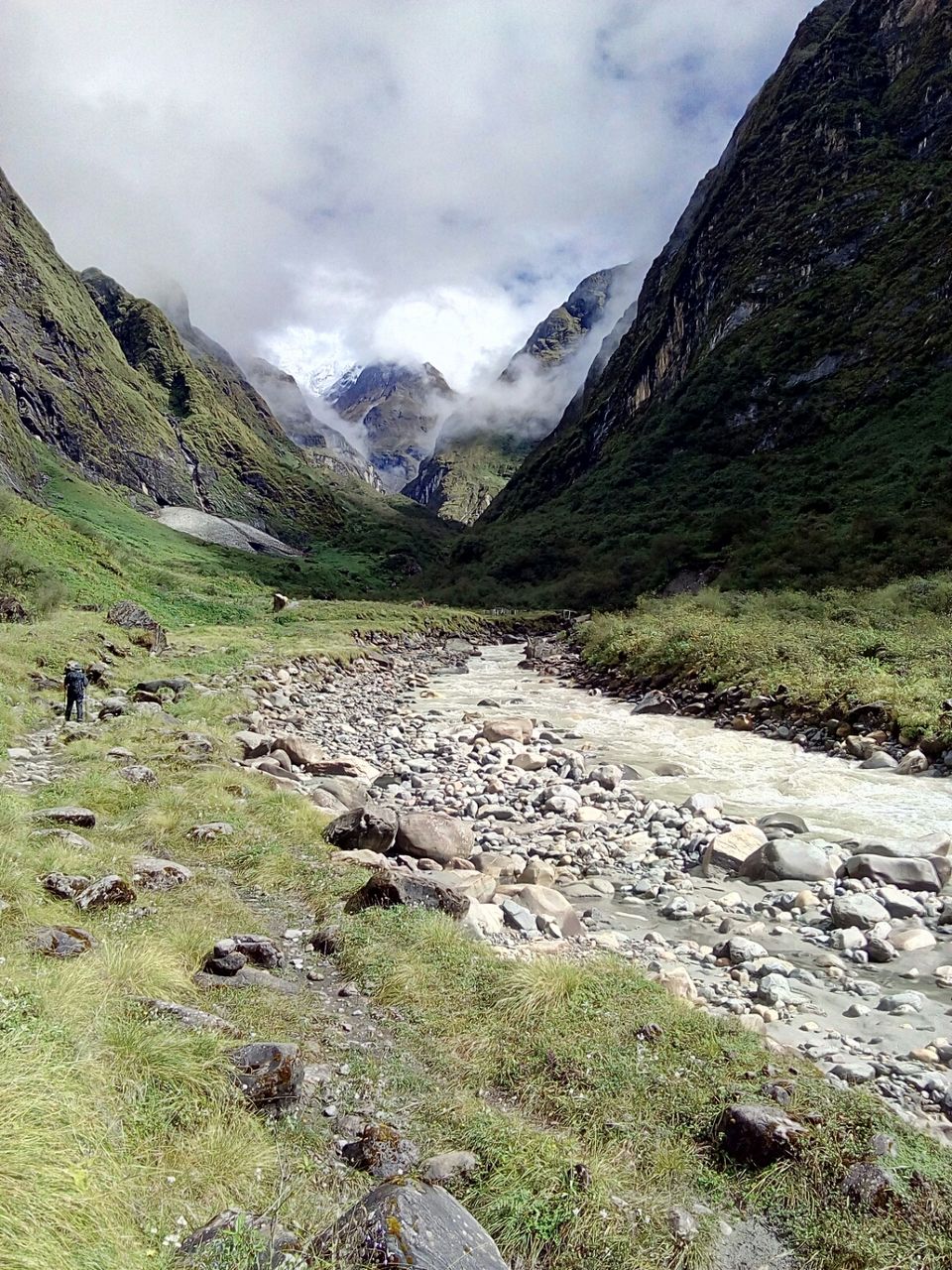 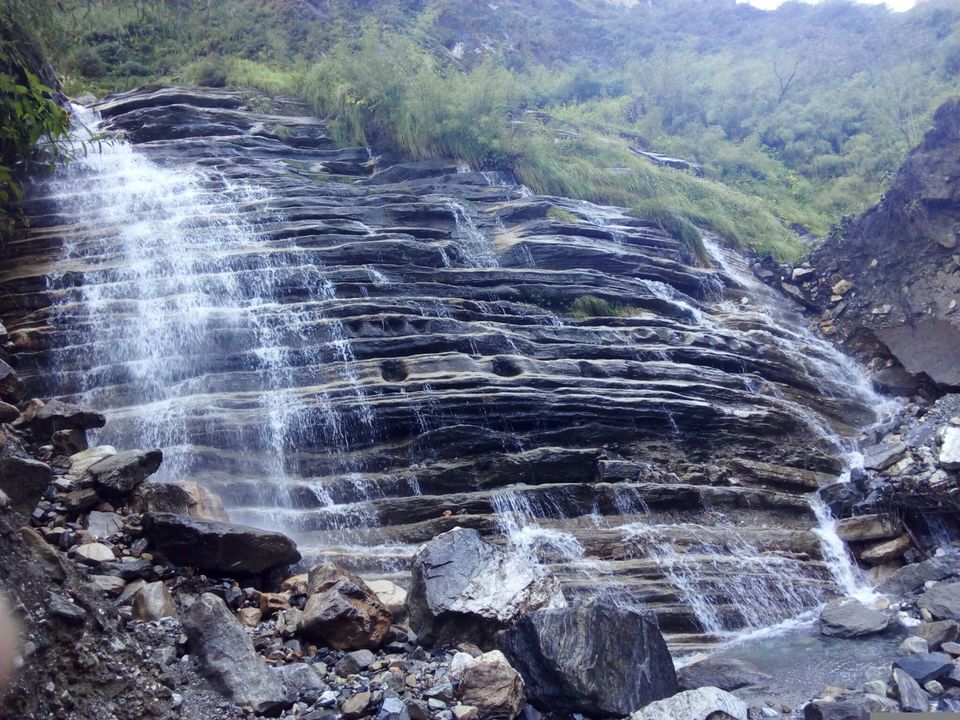 On the break of dawn, outside our room, the Annapurna, the first mountain above 8000 m to be scaled by man, awaited with all its glory and magnificence. “Wake up you mortals, soak in our grandeur before the fogs and clouds make us elusive again” – it seemed to suggest.  The morning mists and fogs teased for a while until the sun-rays sprinkled gold on the snow-capped mountain tops from behind the Machhapuchhre in the east.

After taking in the mountains as much as we could, and surely we could not have enough, we departed from the base camp around 9 am and reached Himalaya for lunch. From there on, we were accompanied by our trusted friend (the rain!!!). It made sure that we were well drenched. By the time we reached Lower Sinuwa to find shelter, it was pitch dark. The lesser said about the night, the better. The constant shower had us frustrated, and we surrendered our plans to continue with the trek to Mardi. 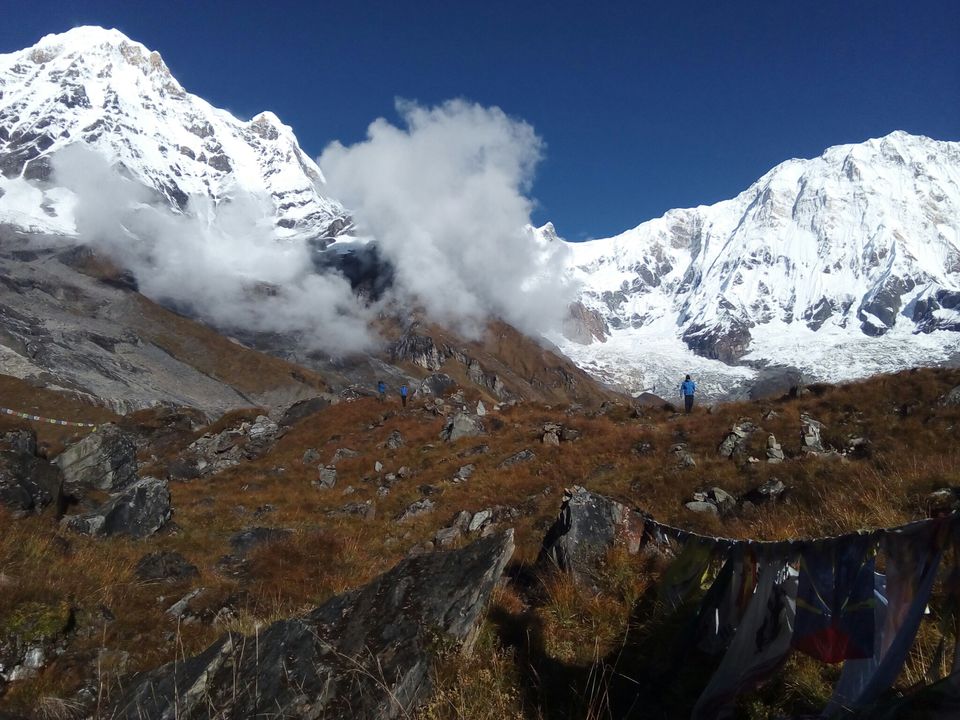 The mountains at dawn 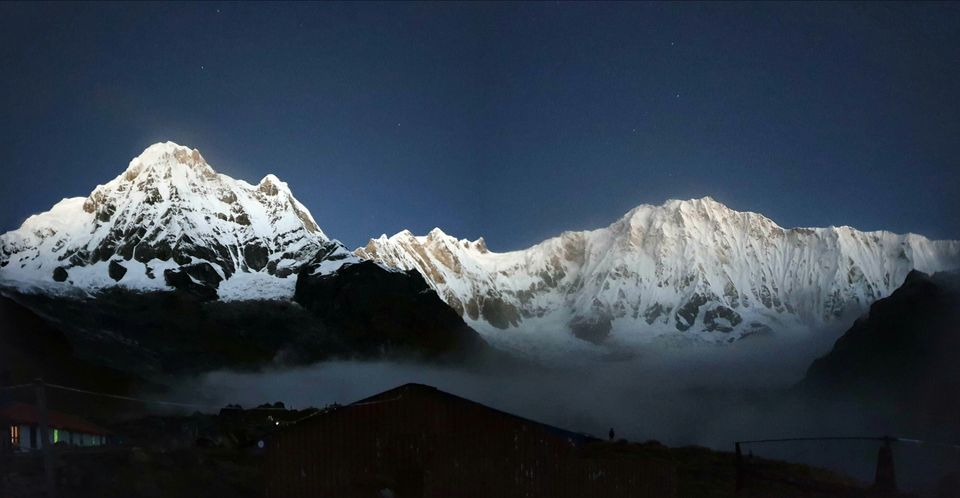 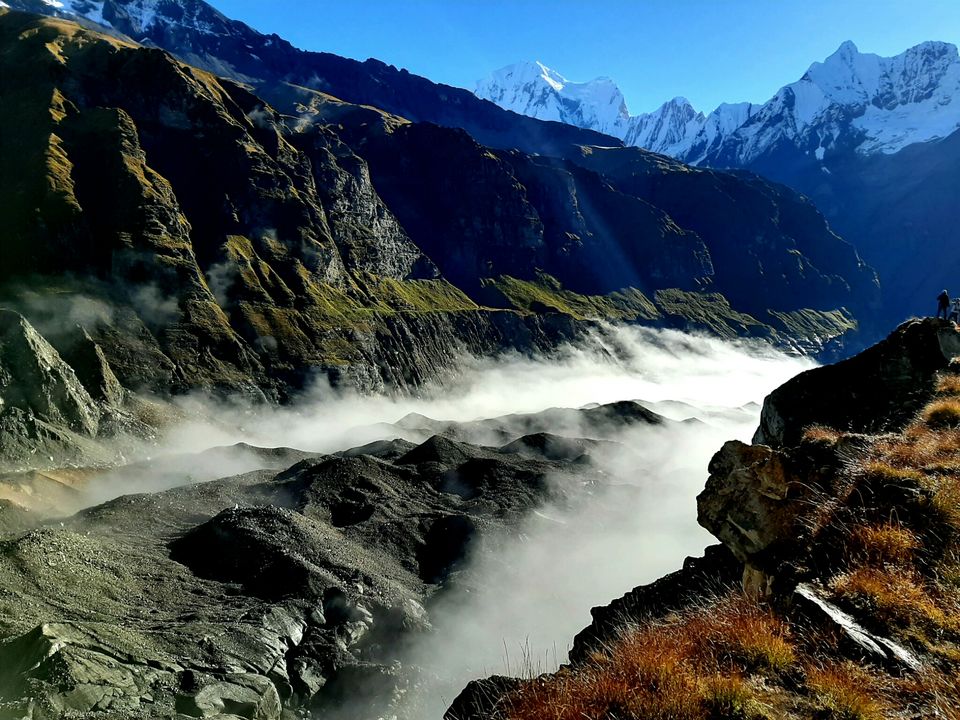 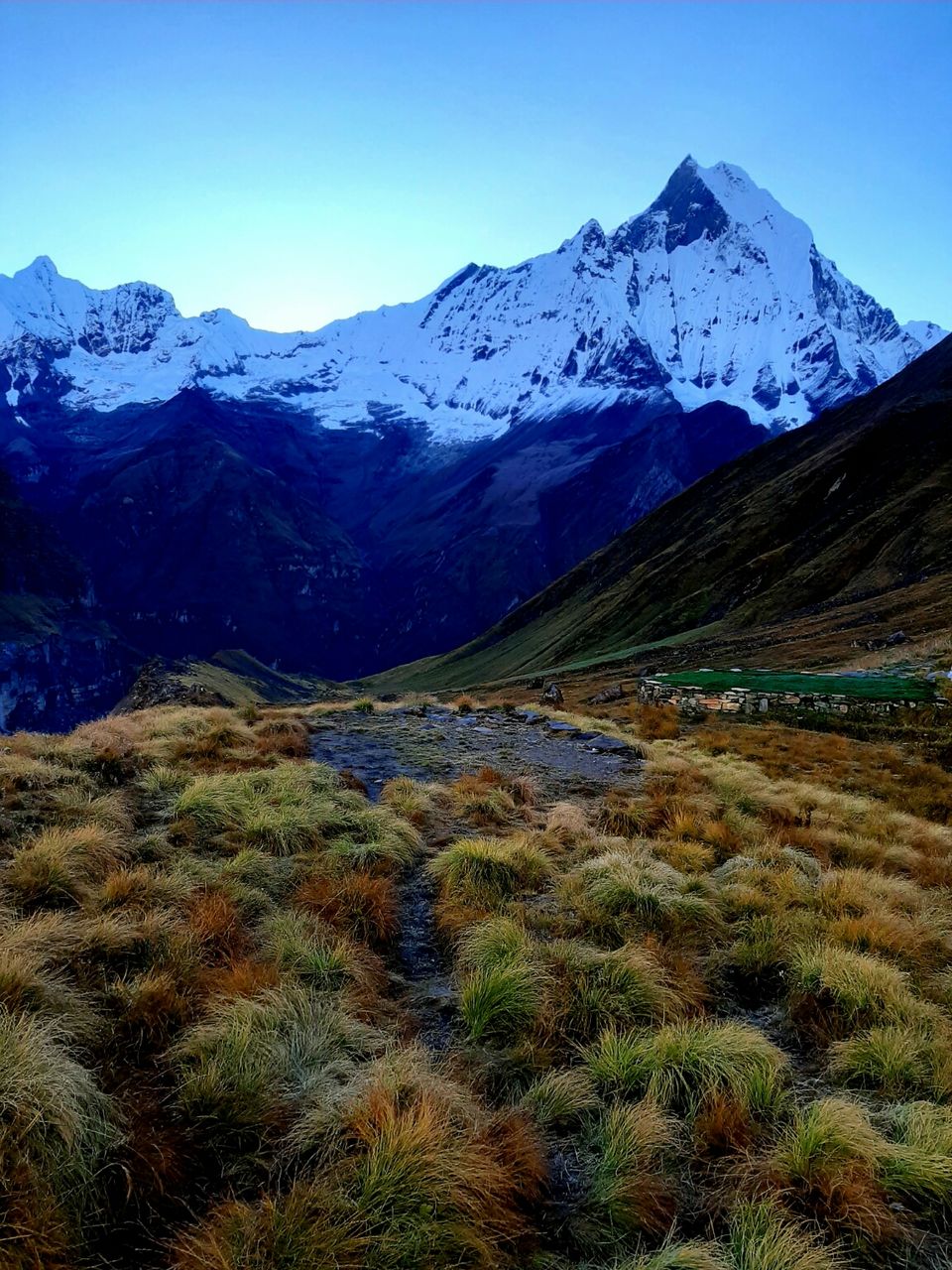 Descending from the base camp 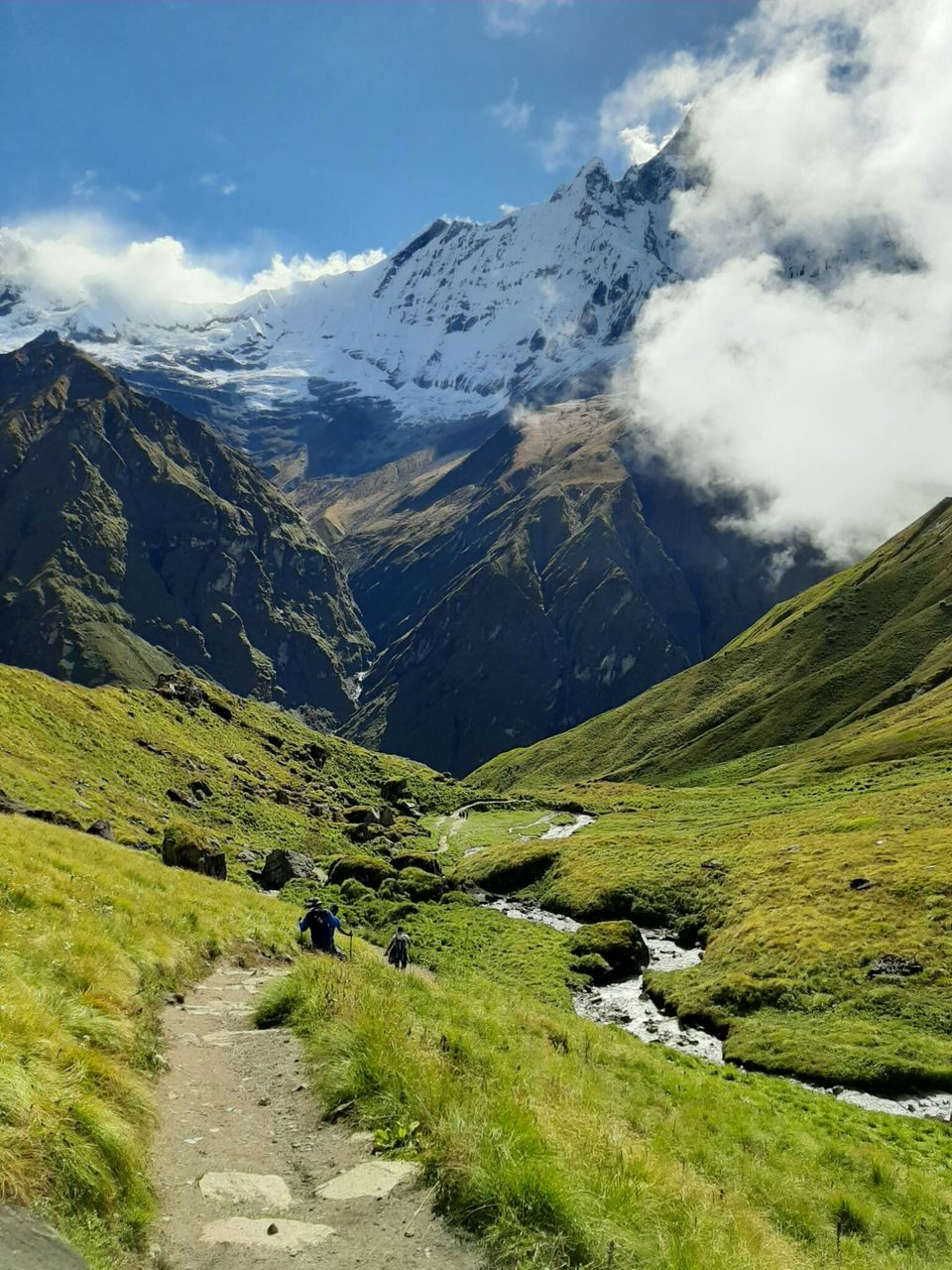 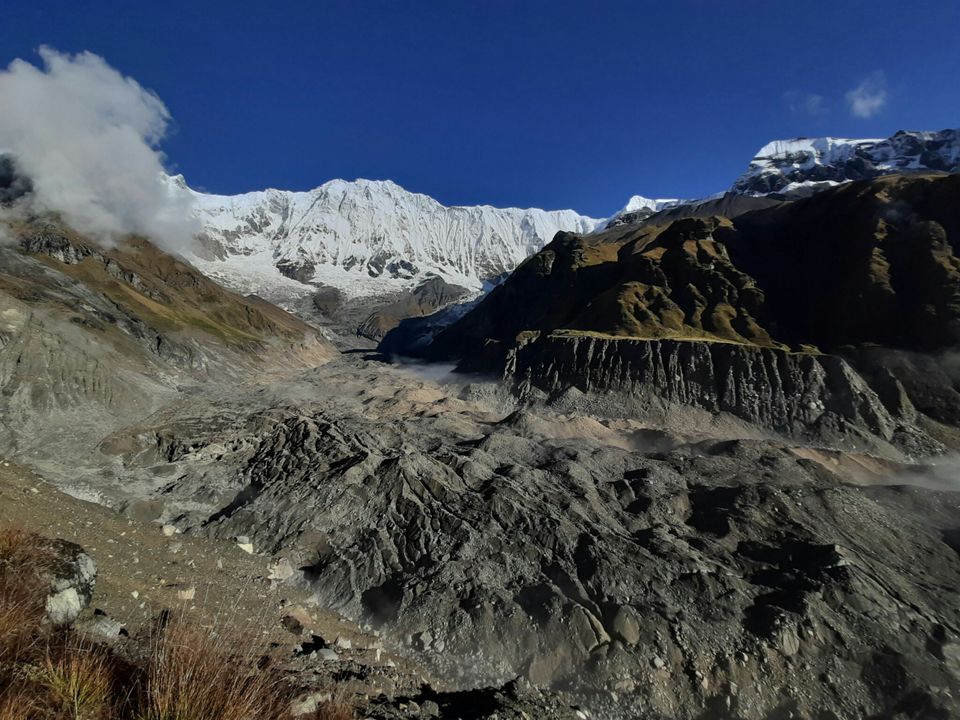 The next morning, we left for Jhinu where we indulged ourselves in the hot water spring. Clearly the treatment required for our tired limbs and bones. Relaxation at the hot spring and a heavy lunch meant we were not really in the mood for walking. Nevertheless, we made our way down the hills gradually, our joints still aching at each step we took. We soon reached a road track in the opposite hills (no more climbing and descending for the trip, hurrah!) and began to enjoy the brisk walk along the road amidst the afternoon hilly breeze in what seemed a small unassuming forest.

We were disturbed by movements in the forest beside us. Branches in the trees started moving rapidly. The sound of feet stepping on crumbling leaves made us wary. It felt as if the jungle had come alive. As we cautiously took our steps forward, we began to see a group of long tailed animals with long slender limbs and grey coats of fur with a very dark face – “looks like langurs!” I exclaimed. In all sizes, some of them jumping from one tree to another, but mostly running away to the forests from the track upon seeing us. Some of them were even carrying their tiny babies, which made us all the more careful. From thereon, it was a mere twenty minutes stroll to Matkyu, where we boarded on a jeep to take us to Lakeside, Pokhara.

The stream by the hot springs 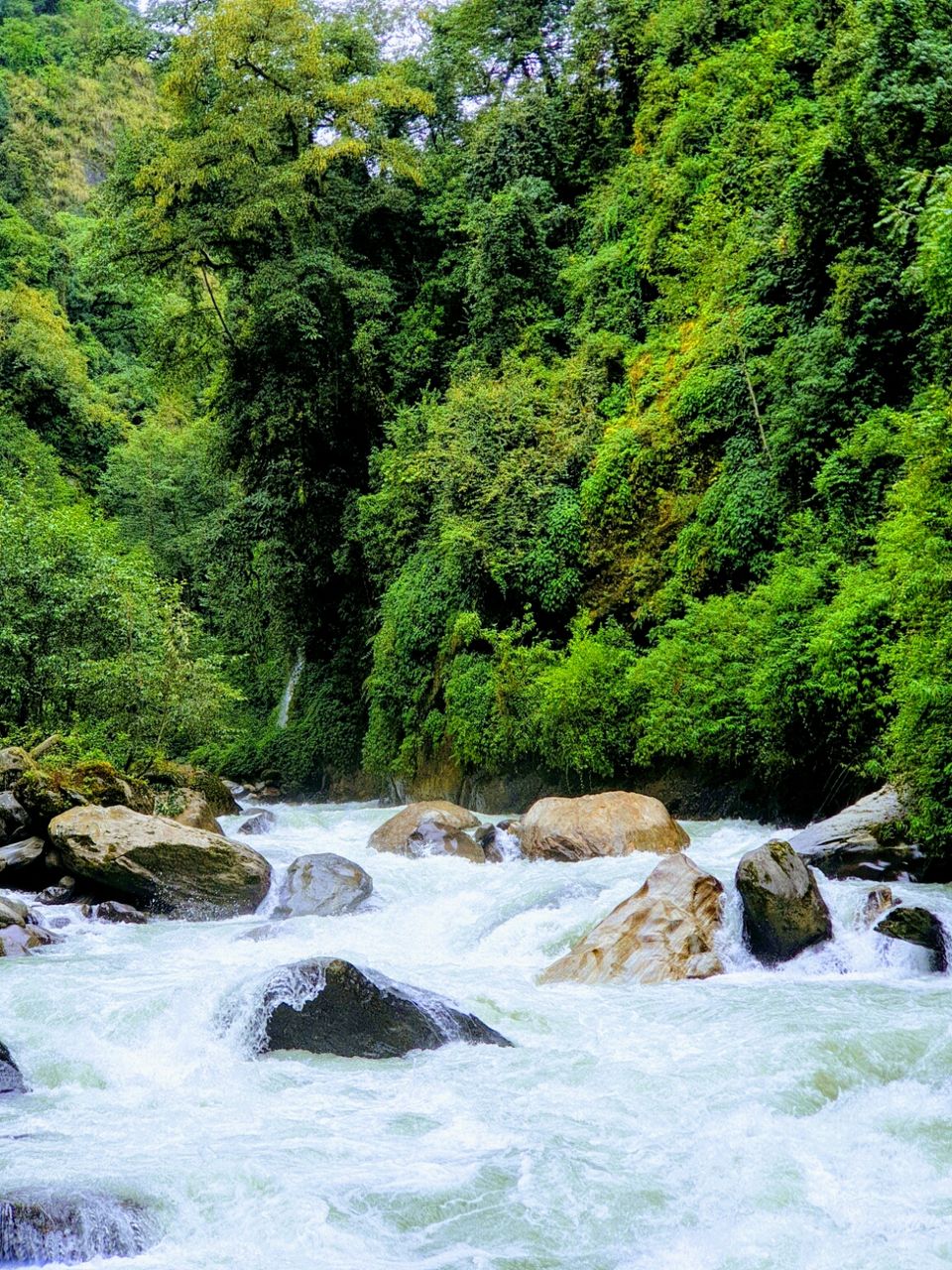 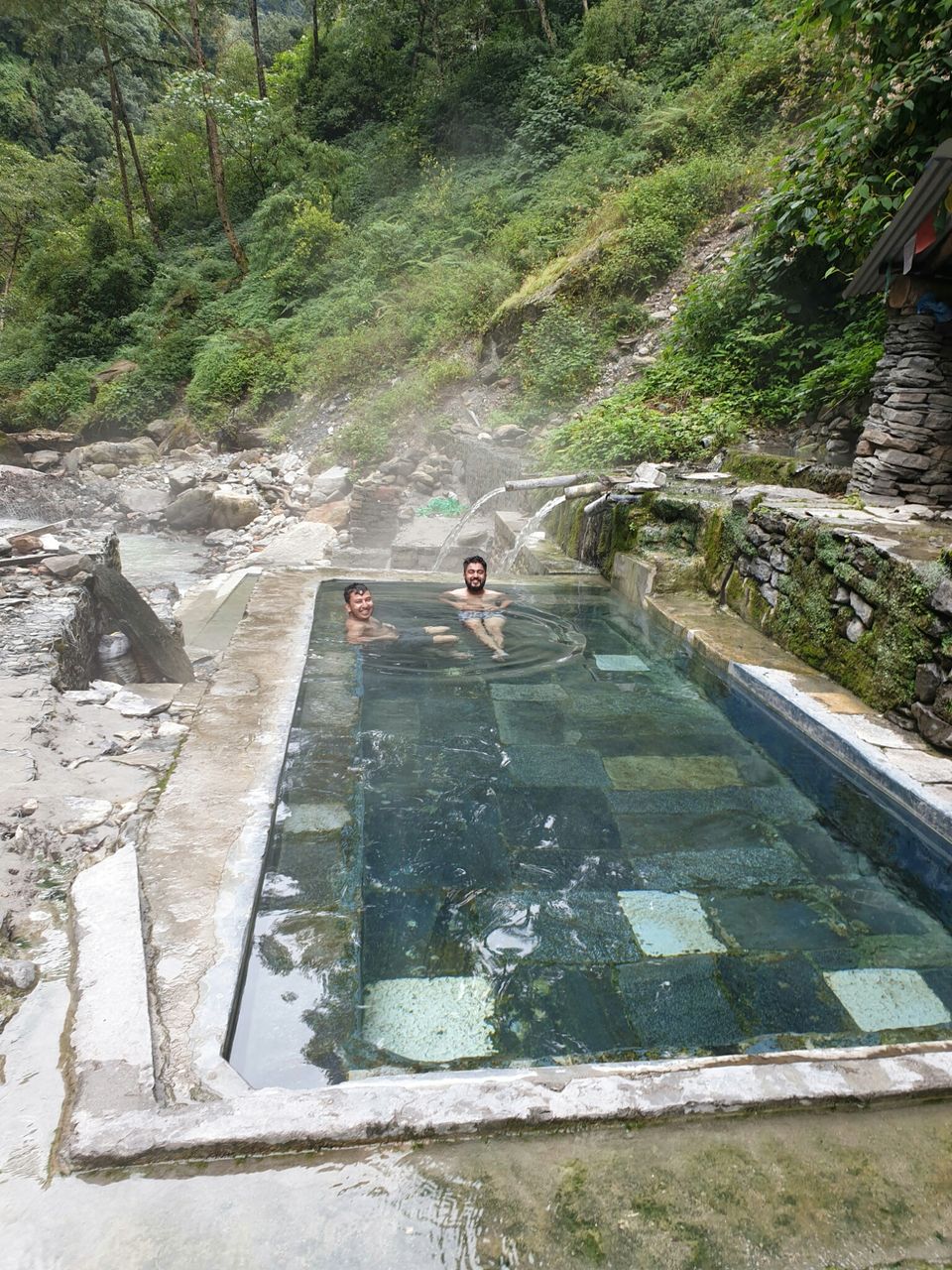 Last sighting of the mountains 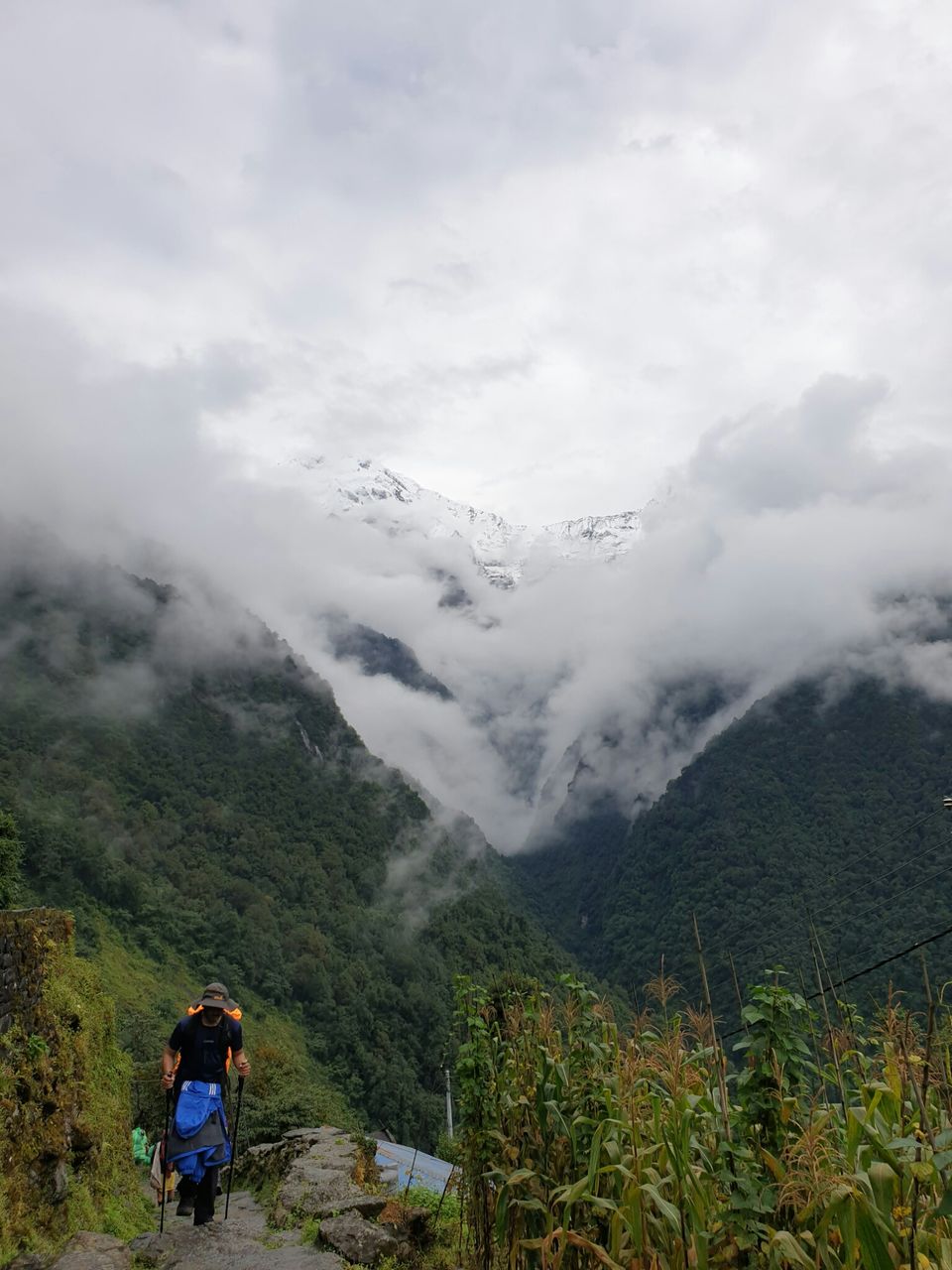