After covering Delhi, our next stops were Agra and Fatehpur Sikri– a one day trip. It was part of a conducted tour. The bus left Delhi at 6am – yes, we had to wake up early even though the previous day had been pretty tiring. Besides, as long as you’re travelling to cool new places, these things don’t matter much.

We got to see the “early morning Delhi” as the city woke up. The early birds were out jogging while the milk vans were making their trips. Newspaper boys had set up their distribution points. I saw one near Humayun’s tomb where they were segregating the papers and inserting pamphlets. The random thought of APJ Abdul Kalam crossed my mind – I remembered reading about him in school and how he earned his first income by distributing newspapers.

The expressway started at Noida (Greater Noida I guess, though I’m not too sure what makes it greater than the other part!) I saw the Buddh International Racing Circuit as we passed by. I thought of doing something crazy. I have this love for social media and experimenting stuff on it. I decide to plot my entire trip on Facebook by checking in wherever I go. I knew I would get some irritated comments from friends – sick of my updates, but then – what the heck! Let’s give it a shot and see anyway!

We stopped once on the way for breakfast at an expressway hotel. From there, it was a cruise to Agra on the beautiful road. Our first stop was Agra Fort. The fort is quite similar to the Red Fort of Delhi. Organized tours include guides. Our guide was this cool dude with a fast receding hairline, a pair of sunglasses and an accent that would challenge even the best English pundits. I could pick up bits and pieces and put together the story. The fort was built over generations of Mughal rulers. Shah Jahan was held captive here by his own son, Aurangzeb. We see the chamber where he was held. According to his wish, the chamber was such that the Taj Mahal could be seen from there. Next we see the Diwan-e-khaas where the eminent ministers and Emperor met and discussed administration. The courtyard of the Fort used to hold the Meena Bazaar. One week every year, the women of the royal family were allowed to do shopping. Guide Dude went on to say that he couldn’t imagine women who couldn’t live a day without shopping. I laughed as I could think of at least 5 of my friends who would have buried Guide Dude alive for that comment, complete with sunglasses and all! There are rooms containing records and files of the Mughal times. Something that really shocked me was the fact that the great Shah Jahan, who is known for his love for Mumtaz, also had 340 unofficial wives. Three hundred and forty! Talk about a big heart! After this, we moved to the magnificent Diwan-e-aam where the Emperor would address his subjects personally and redress their grievances. It is a huge pillared hall with a raised platform on one side for the King to sit. There is a mosque inside the fort which was the only place where Shah Jahan was allowed to go other than his chamber. The guide explains that this was only 20% of the entire fort and that the rest is in the control of the army.

Next we were taken to a handicrafts store where they showed us how marble sculptures are made. The intricate patterns on the white marble are not painted as it may seem. Small pieces of semi-precious stones like onyx are used to create designs – the tiny pieces are fitted in the form of flowers and other shapes. In fact, even the calligraphy is fitted in the same manner. This is the reason why these structures have endured as paintings would fade after a long time.

Our next stop was at the Taj Mahal, one of the wonders of the world and the first image that is flashed across the world when the word “India” is mentioned. Petrol and diesel vehicles are not allowed 500m near the Taj and so we took a battery mini bus to the West Gate. After a long line in the hot sun, we entered the complex. There is a very cool illusion that you can see while entering the main gateway towards the Taj – the Taj seems to move away as you walk towards it. It is due to the shape of the arch of the gateway through which we can see the Taj beyond. This monument was built as a symbol of Shah Jahan’s love for his wife – Mumtaz. What could take away this glory is the fact that he had over 300 wives and also, the sculptors’ hands were chopped off so that they couldn’t replicate this wonder anywhere else on the earth. But then again, people get mesmerized by the beauty of the Taj and blot out the “insignificant and uncomfortable” truths behind it. A trip to the Taj would have been incomplete without a lot of photography. And that’s exactly what we did! To walk into the Taj, you need to wear shoe covers – a new innovation so that people don’t have to remove their shoes while entering the monument. Talk about convenience! Inside the Taj, we saw replicas of the tombs as it is below in the crypt. The entire Taj complex is preserved beautifully with magnificent gardens around the monument.

The fort is quite similar to the Red Fort of Delhi. The fort was built over generations of Mughal rulers. Shah Jahan was held captive here by his own son, Aurangzeb. 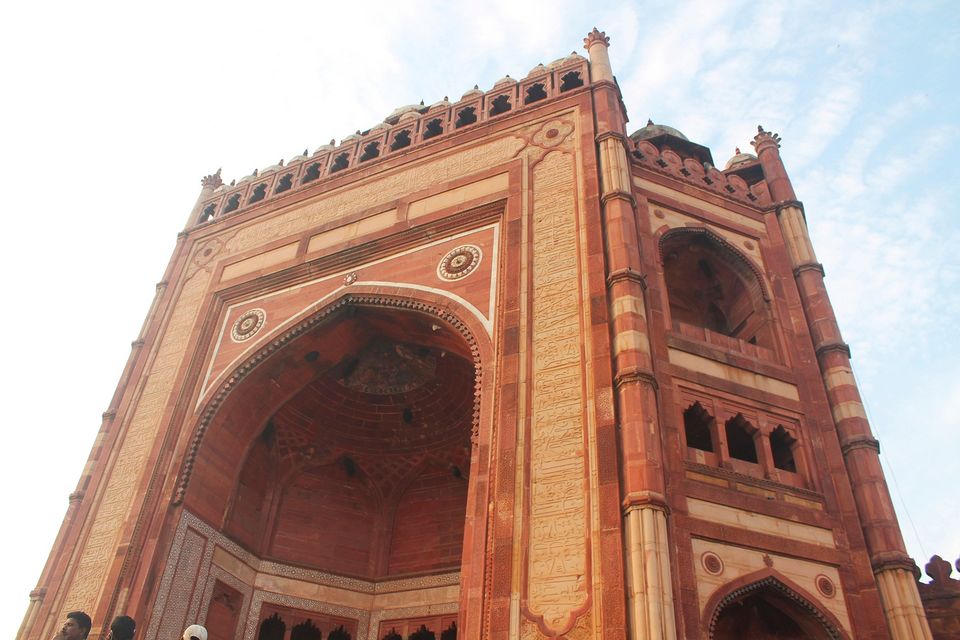 Taj Mahal is one of the wonders of the world and the first image that is thought of across the world when the word “India” is mentioned. This monument was built as a symbol of Shah Jahan’s love for his wife – Mumtaz. 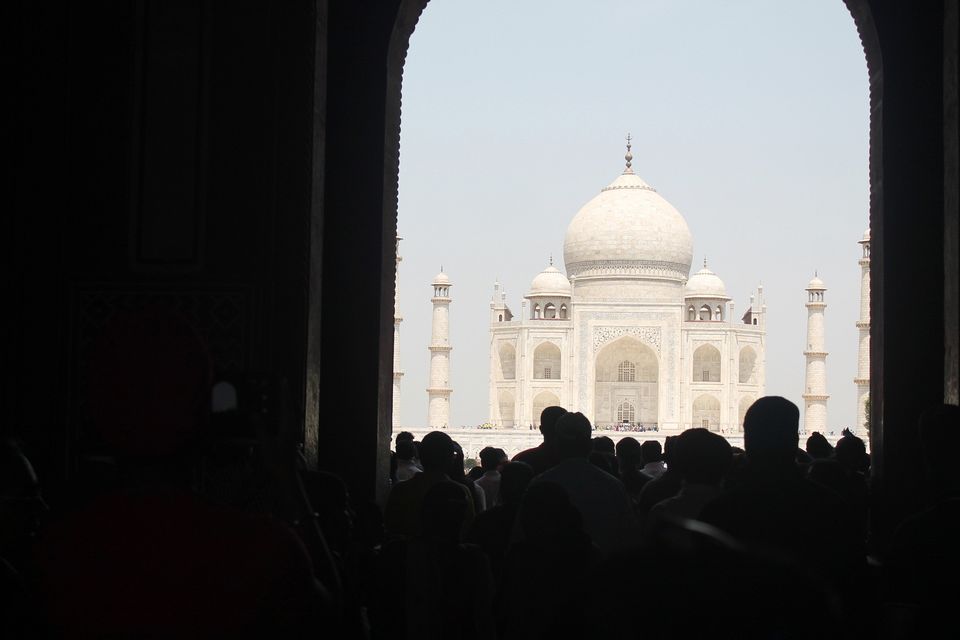 This city was the capital of Akbar which was soon abandoned due to shortage of water and resources for his enormous troops. There are remains of the huge walls bordering the city and we entered it through a huge arch gateway. We first went to Akbar’s palace, and then headed to the shrine of Salim Chishti. 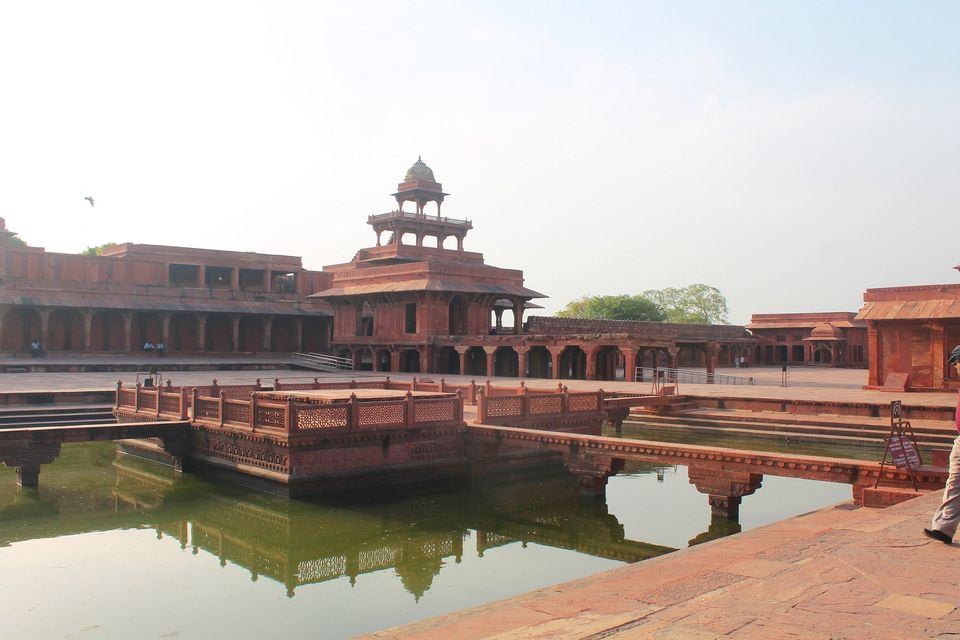 Our next stop was Fatehpur Sikri. This city was the capital of Akbar which was soon abandoned due to shortage of water and resources for his enormous troops. There are remains of the huge walls bordering the city and we entered it through a huge arch gateway. We first went to Akbar’s palace. This place was characterized by a very unique style of architecture with Hindu, Muslim, Christian and Jain influence. As with most Mughal royal capitals, this too had a Diwan-e-khaas and Diwan-e-aam. The Diwan-e-khaas was a good 10 feet up in the air on pillars. The central pillar held the seat of Akbar and his ministers sat around him at his 12:00, 3:00, 6:00 and 9:00. Talk about tall discussions! The Diwan-e-aam was in an open garden with beautifully manicured hedges. Akbar was known as a great benevolent ruler who was tolerant of all religions. But as with Shah Jahan, there was no shortage of slavery. His palace had a huge stone courtyard where he played human chess and dice with slaves as his pieces. We saw the Panch Mahal – a structure with five storeys and a huge platform supported by pillars. The upper portion used to be a library and the bottom was a school. Akbar had a “dream house” with his king sized bed (trust me, it was huge!) on a tall platform. The kitchen building was huge and had fancy earring and jhumka patterns on the stone walls. Akbar had over 300 unofficial wives but he had special palaces for 3 of his wives. His Muslim wife had a small chamber – hardly the size of a normal bedroom. His Christian wife had a bigger house. But Jodha, his Hindu wife, had hit the jackpot and got a huge palace for herself. The reason for this was that despite having so many wives, he never had children. He was blessed by Salim Chishti and Jehangir was born to Jodha. Hence, the huge palace for her. That’s exactly where we headed next – the shrine of Salim Chishti. After wishing for three boons in the form of knots on a thread and tying it inside the shrine, we walked out to explore the huge stone complex. One of the entrances to this complex is through the famous Bulund Darwaza, a gigantic gateway. We saw a group of singers sitting outside the shrine with a harmonium and playing away. The evening scene was one full of people standing in the red background of the huge stone walls with the red sun setting in the distance.

After a day packed with history, we head back into our bus and it floats back to Delhi on the smooth expressway.