barsey-rhododendron-trek, A low altitude trek in west sikkim for beginners

I took a break from my work after a long time for this Barsey rhododendron trek. I was excited as it was my first trek. Last time I was on hill when I was just an eight years old kid. It was Darjeeling and the only memory I had was lost on the way to Tiger Hill and somehow returning back to the hotel.

We had a ten-member trek group and the youngest member, Dodo, was only eighteen months old back then. We have booked Padatik express from the Sealdah junction. As per the plan, I met with everyone at the station and came to know that there were two more "trek-virgin" beside me. The plan was to reach Hilley and then go for Barsey rhododendron trek on the next day. Being nomadic, I would to grasp all the misty mountain breeze on the very first trek of mine and also wanted to roam instinctively. We have burrowed everything require for camping.

After the overnight journey, we reached at New Jalpaiguri at 8.30 am and had breakfast there. We hired a private car and headed towards Hilly which was approximately 7/8 hrs journey from NJP. On the way to hilley, I was blown away by the scenic beauty of Sikkim, and colours of Teesta. It was bleeding blue in the sky and blooming green in the water. We took a quick break at Jorthang for lunch, and I had my first pork there. After 8 hours of journey, We reached Hilley around 4.30pm.

My first night in a tent:

We pitched a tent in front of a hotel for all of us except for Dodo and his parents who stayed in that hotel. I slept inside a tent for the very first time and it was a new experience for me.

The next morning I woke up and unzip the tent and saw sunlight kissing the mountain. Its beauty was beyond my words. After breakfast, we started our trek around 9 am. We paid entry fees of 50 INR per head and 30 INR for the camera. Then we started walking into the woods. It's a completely new experience for me. It's an easy trek, but I took small breaks throughout the route. Though it was April, the season of blooming we didn't have the luck to see many Rhododendrons throughout the trek. It took approximately 4 hours to reach Bharsey. 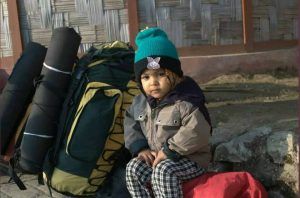 We pitched our tents in front of Guraskunj. They charged Rs 100 to for tent pitching. Arindam da, Debanjali di and dodo stayed in Guras Kunj.

Lunch in the white:

I still remember the moment when Arindam da and Amitava da was cooking under the sky in the afternoon and suddenly snowfall started. Somehow we managed to get a tarpaulin sheet, holding the corners and they were cooking under it. These small moments make a trip memorable. When the snowfall stopped it was almost white everywhere and I had my first lunch on the snow. 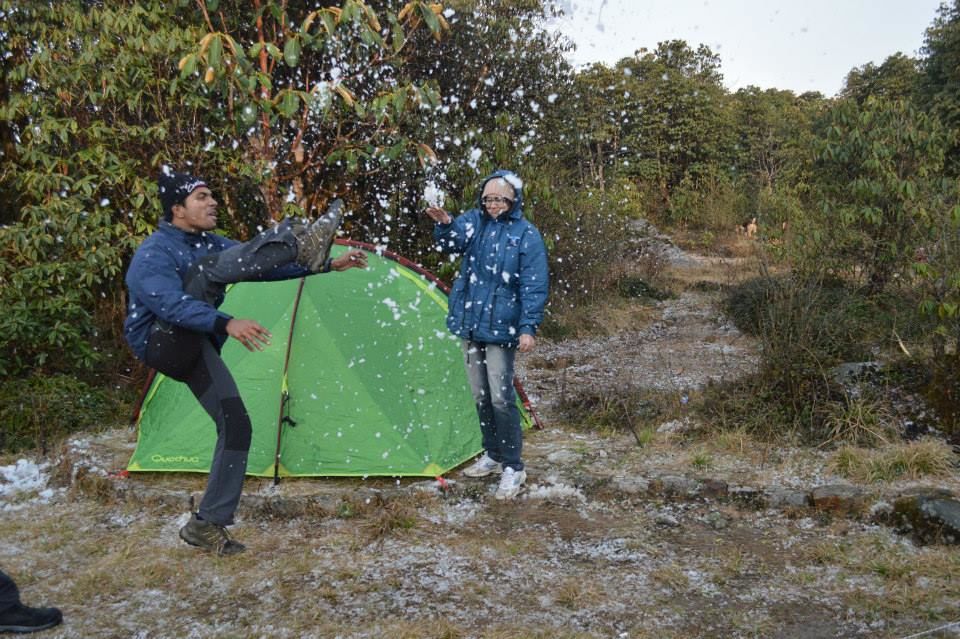 In the evening, I met some people from Guras Kunj. Surprising I found another bong who was from the same street I belong, in there. We slept early that day.......

The next morning I woke up early and witnessed a beautiful golden Mt. Kanchenjunga. I am surely run out of adjectives to describe the moment. The mountain, the sunlight, the chilling breeze, and the age-old trees reminded me that I am alive. After breakfast, we headed towards an unknown destination. Our plan was to camp in the village on the way.

After 5/6 hours long walk through the wood we reached a village called Buriakhop. We camped in front of a house in that village and we received a warm welcome from the villagers. Few villagers came to meet us. We requested a place for dodo and his parents. And they gave us their best room and refused to take anything in return. We stayed there for 2 days. The next day I was asked to cook lunch, and it was a difficult task for me. I stayed in a hostel for four and a half years and I was a good helper for the cook at every party but cooking for 9 people! It was a tough task for me. But somehow I managed to cook with the help of Rahul and passed the test with flying colors. After that, we visited a monastery and roam around the woods.

On day 4 we started another journey at 9. It was an easy trek on that day. After 4 hours walk, we reached a village called Dodak. It took some time to find a good place for camping, as most of the surface was bit hard and uneven. After that, we took a bath in nearby falls and it was an amazing feeling. After lunch, I was roaming around, taking pictures, absorbing the last remnant of nature before going back to the concrete jungle. 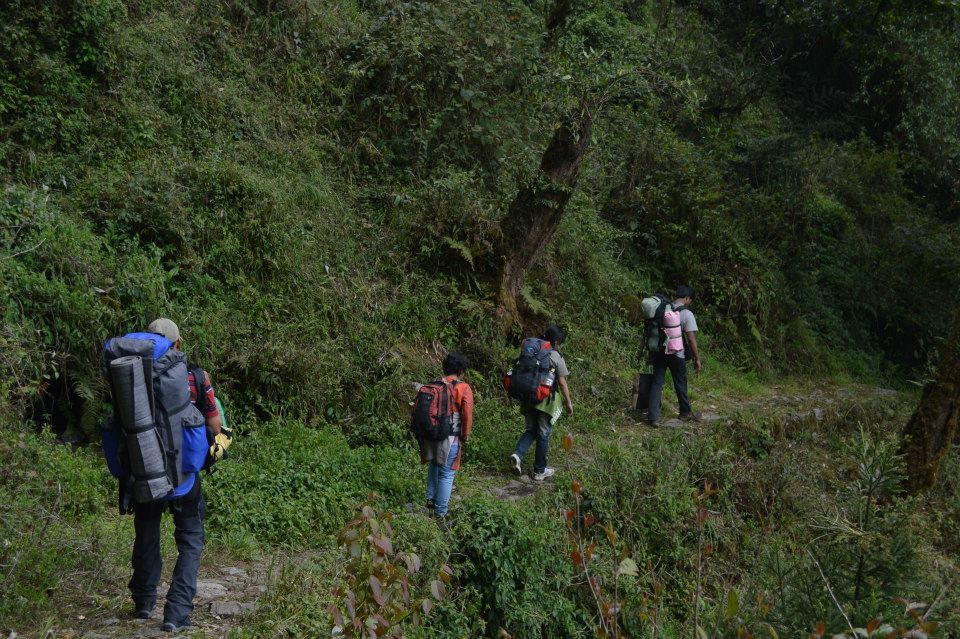 The next morning we started our walk at 9.30 am. We reached Singling, our last village of this trip. The place we camped was surrounded by some aromatic plants. I can still take the fragrances with a closed eye. The landlord Dushan Rao was a very nice person. He told about some of the medicinal plants around their houses.

The next day he gave us a lift to Jorthang. And I had pork again at the same restaurant. We book a car to NJP and boarded Padatik express to sealdah. That's the end of this trip.

As Barsey rhododendron trek was my first trek, this trek was a new beginning for me. I learned too many things from this trip. It was a completely new experience for me. There were lots of things I did that I never did before. I stayed in a tent, took bath in waterfalls, cooked for 9 people, saw snowfall for the first time, witnessed an 18 month kid completing a 7-day trek with his parents, saw how helpful people are. And there were lots of things that I can't describe in words, those can only be felt. It was the trip from where things started a change in my life.