After a very hectic day we crashed into our beds to relax before we begin the evening tour which looked very promising.

We were picked up by the tour bus at 7 PM and it took us to other pickup points and their main office opposite the Old Post office building. There our tour guide for the evening Andrew aka Andy got into the bus and started cracking jokes. He showed us a few card tricks and magic as well to entertain us. It was fun and exciting when he said that all along the tour he will unravel some of the mysteries and symbols that lay strewn across the entire city.

The first stop of the evening was the Capitol Hill. There he showed us the map in front of the Capitol Hill ground. The map resembles an owl, a very powerful symbol of the ancient secret societies. Andy said there are many such symbols that lie in front of everybody’s eyes but people seldom recognize them. He said how the Capitol Hill was built and told us the story that during War of 1812, how British had set fire to the entire city but strangely enough it rained very heavily that night which put out most of the fire. This event gave Americans a lot of hope and they believed that it was some kind of divine intervention and they regrouped and fought back against the British. He also talked about the grass which according to him symbolizes life. Also grass can grow anywhere and it actually grows back again after winters. He also spoke about the three symbols The Capitol Hill, The White house and the Washington monument (which signifies freedom) make three corners of a perfect triangle. As Andrew was overwhelming us with information my friend got busy in taking pictures of the spectacular view of the Capitol Hill under lights. 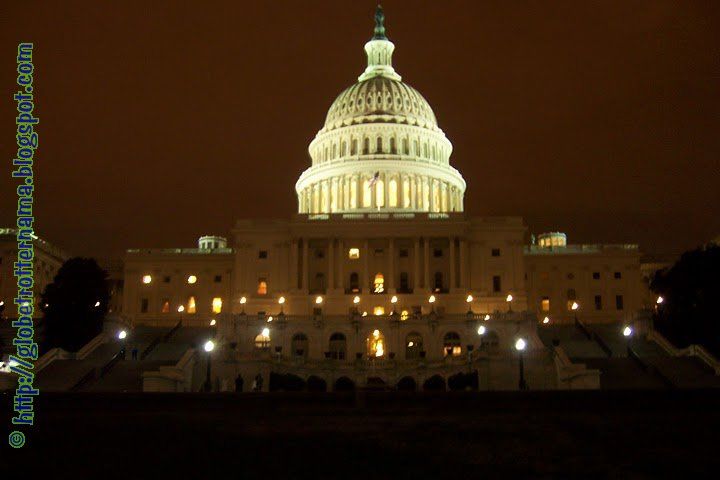 After the spectacular view of the Capitol Hill, the next stop was World War-II memorial. It was a very beautiful place. Andy showed us the two walls leading towards memorial. The two walls signify the Pacific and Atlantic oceans, across which America had fought the war. There were many sculptures embedded in the walls depicting the hard work and toil of the people of America during the war. Andy actually provided us with a whole bunch of information about the memorial. Like, the ‘Freedom Wall’ with 4048 golden stars each of which represented 100 American soldiers who died in war with a message in front of the wall that read “Here we mark the price of freedom”. 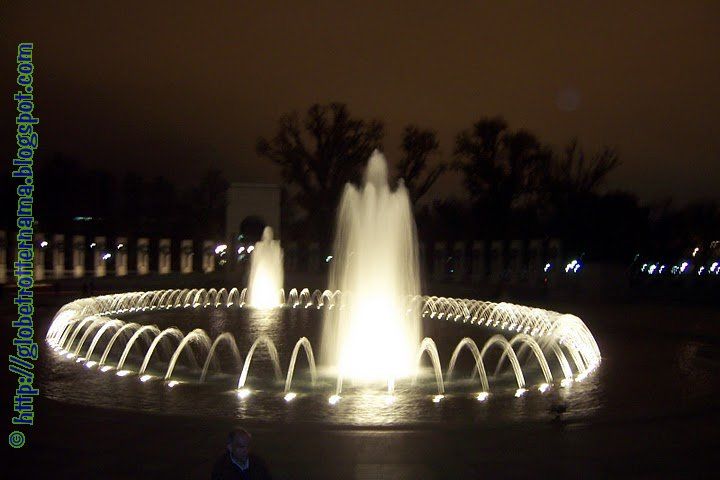 After World War-II memorial next stop was Thomas Jefferson memorial. Before entering the monument Andy our guide showed us a trick with a fork, which he said, was the Thanksgiving treat which he had promised earlier. The Jefferson memorial has the references to the Roman Pantheon and Jefferson’s own design for the Rotunda at the University of Virginia. 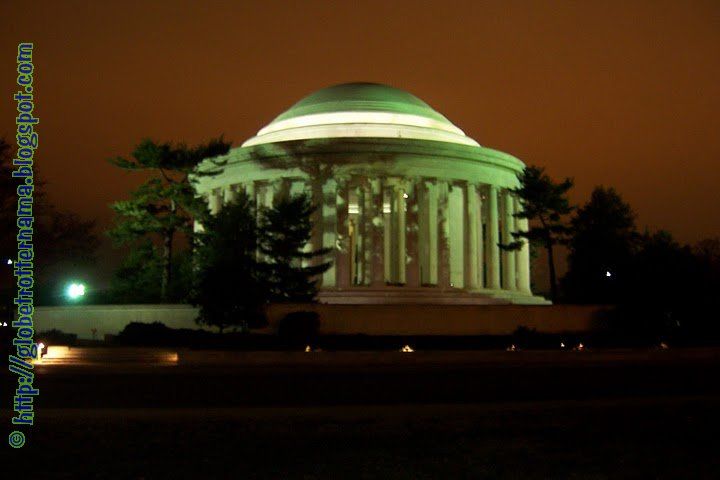 After Thomas Jefferson memorial the next stop was Korean War memorial. Which is a memorial dedicated to the memory of the veterans who fought the Korean War. 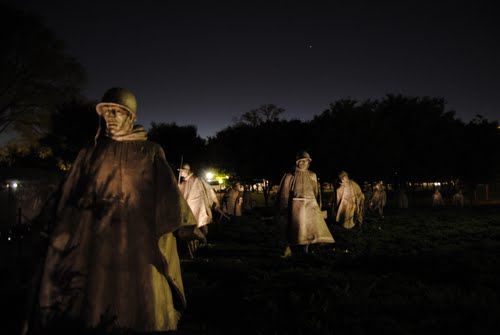 The next stop was Vietnam War memorial. The memorial has three different parts namely the Three Soldiers statue, the Vietnam Women’s memorial, and the Vietnam Veterans Memorial Wall. The wall had several things (photos, wreaths etc) that were laid at its bottom as a mark of respect for the fallen soldiers by their families and loved ones. I noticed one man breaking down to tears on finding a name on the wall. Andy gave lot information about the memorial and one striking thing was the black marble stones used for the walls were polished at namma Bangalore. At the end of the tour when we were back in the bus, Andy asked us about the thoughts for the Vietnam War Memorial, everyone was quiet. It was very solemn moment. Only thing that was going on in my mind at that moment was “well Bangalore doesn’t export only software engineers to US but also contributed for something very significant to that country’s history”. Of course I did not speak out those words. 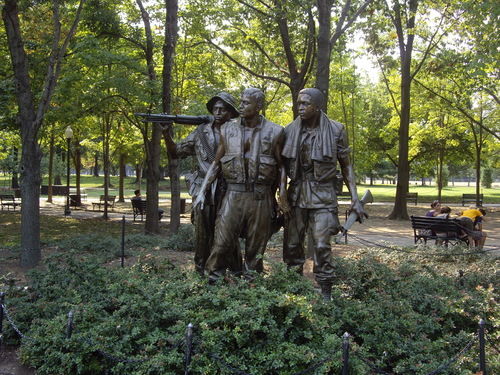 After a very solemn and somber mood at the previous monuments, next stop was Lincoln Memorial. The monument looked spectacular at night. The view of the Washington Monument with its reflection in the pool was simply mind-blowing. 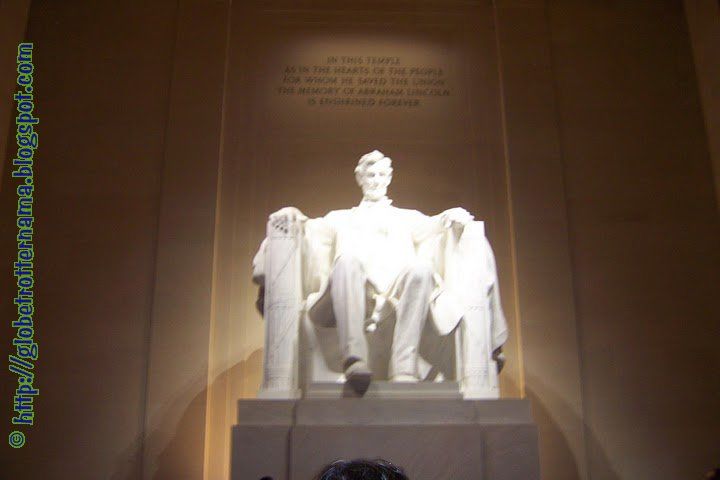 After some spectacular views at Lincoln Memorial we were headed across the Potomac River over the Memorial Bridge to the Marine Corps Memorial or the Iwo Jima Memorial. The memorial depicts one of the most enduring images of World War II, Associated Press photographer Joe Rosenthal’s Pulitzer prize winning photograph in which he snapped five Marines and one Navy corpsman raising the American Flag on top of Mount Suribachi during the battle for Iwo Jima. Andy showed us a mystic of the memorial, he said us to keep our eyes fixed at the flag post as the bus drove very slowly around the monument. It seemed that the flag is being hoisted and finally the flag pole gets erected. 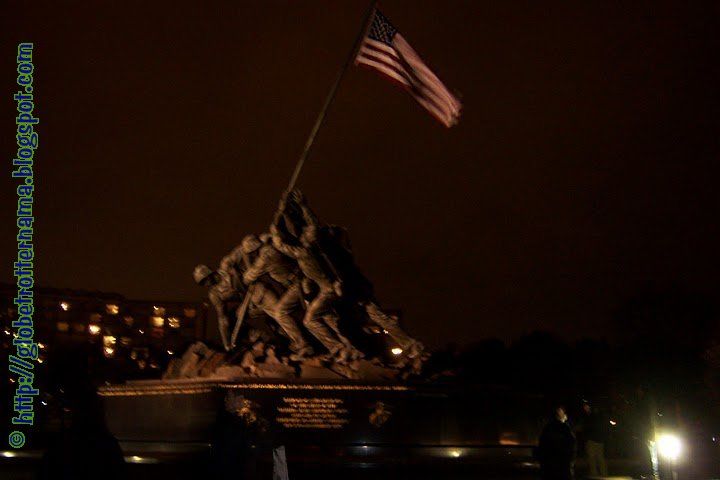 After the Iwo Jima memorial the next and final destination of the evening was the much awaited White House. The immaculate ‘White House’ with bright lights and the lawns looked like a dream come true vision. Only regret was could not see Mr. President or first family. With visit to the White house our tour for the evening came to a grand ending. The night tour was worth every cent. It was not only a visual spectacle but Andy our guide also made it special with his humorous and informative narration. Finally, I would recommend the DC by night tour as a ‘must-see’ for anybody visiting Washington DC. This certainly is not the end of the story I have more so stay tuned… 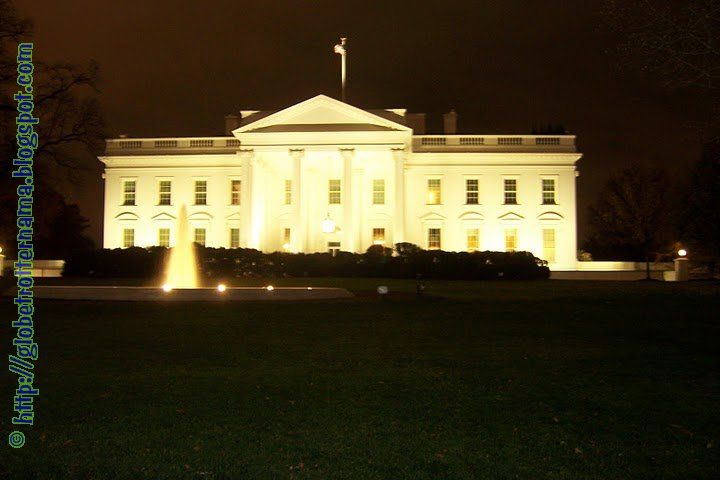