WEEKEND RIDE TO THE ROYAL CITY OF JODHPUR!! 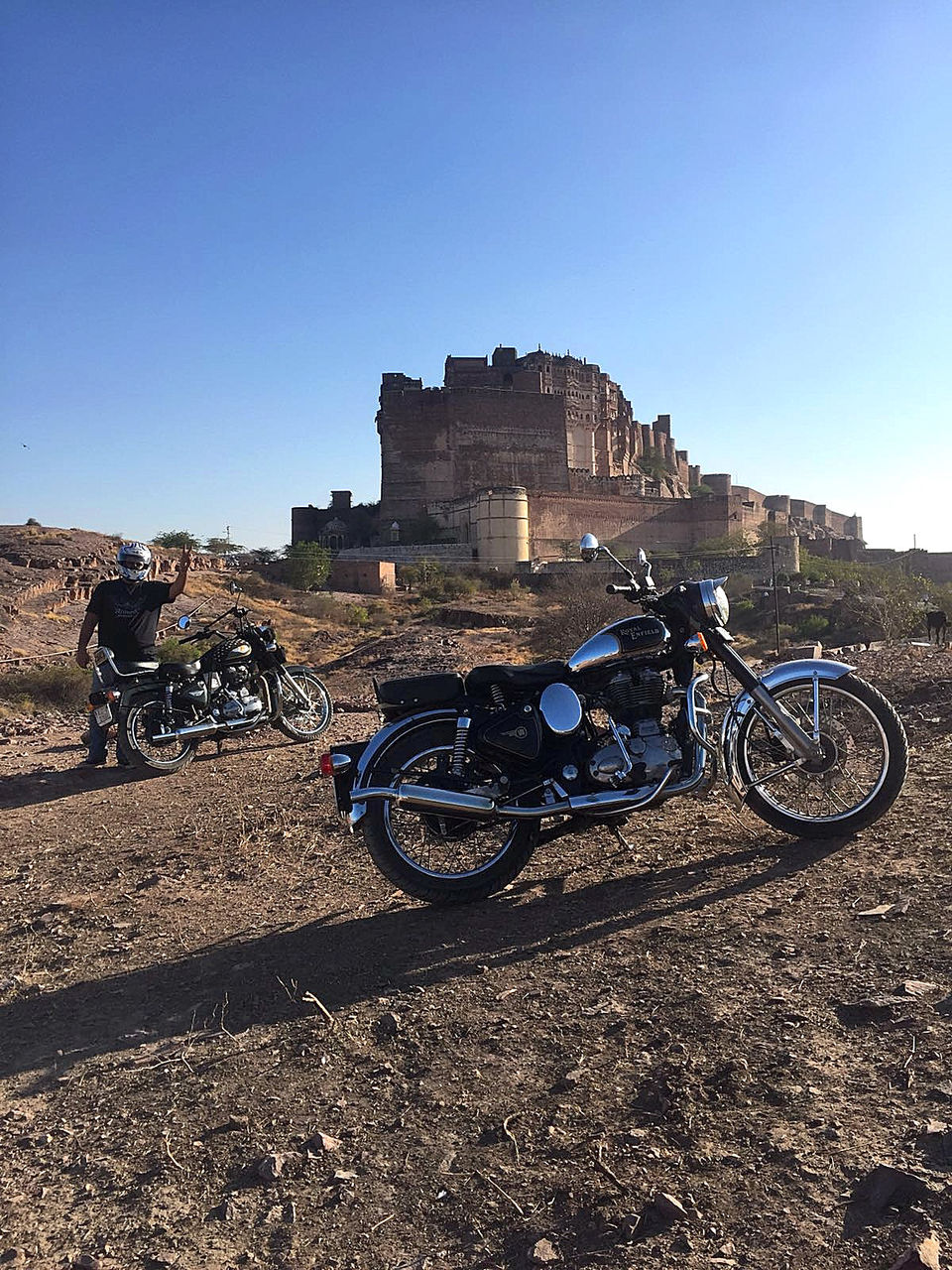 In every person’s life there comes a time when he/she just would love to leave what they are doing and head off somewhere for the weekend for a break from their mundane day to day life. That very feeling crept into me also and I just didn’t know where to go. As luck would have it one of my friend, Digvijay Singh, also called DV, Who is a keen motorcycle enthusiast and the orator of all the rides that take place in our riding club, happened to be in Jodhpur and he pinged on our group that he was riding back from Jodhpur and anyone who’d like to ride back with him was more than welcome to join him.

This was like God sent and as if my prayers had been answered. So I wrote back to him that I would be more than happy to take him up on the offer and to give me a day to get back to him. This ride was not entirely a weekend ride as I would leave on Sunday and be back Monday afternoon. So I finished up all that needed to be done in the office and informed that I won’t be at work on Monday morning, said my good byes, called up my friend and confirmed him that I’ll be seeing him on Sunday afternoon for lunch.

I was excited to get out of town for the weekend (if you can call that), from the hustle and bustle of the city and hit the highway with my lovely bike. She was all topped up as far as the fuel and the oils were concerned and had been recently serviced, so I wasn’t worried there and knew she was running well.

I got home and told my wife that I was going to be out for the weekend and she was more than supportive. I packed a small overnighter bag, took out my riding gear, cleaned my helmet, said a small prayer and hit the sack early. Thought the very thought of being on the road the next day was all too very exciting for me to let the sleep Gods get me some shut eye. Never the less I did manage to pass out and not knowing when but before I knew it, it was time to get going. 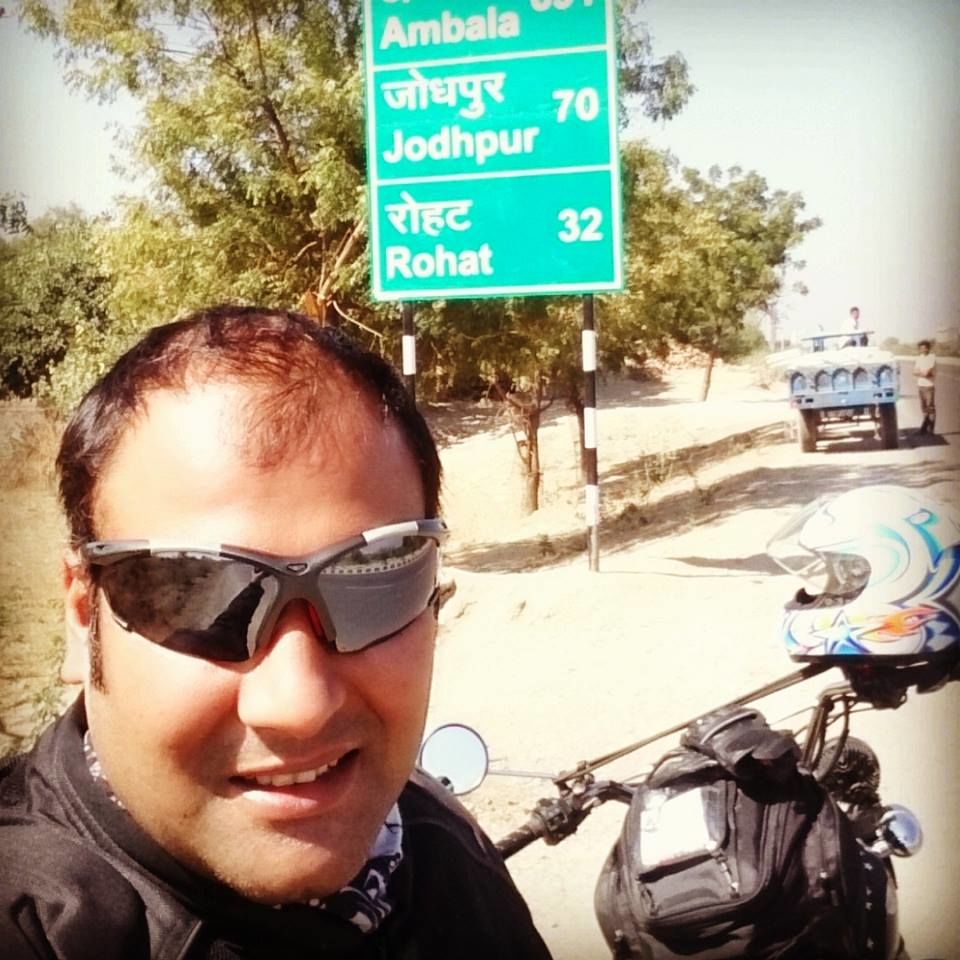 End of February – March is a time when the weather is still good in Rajasthan. In fact if the summers don’t set in early it is the perfect time to still ride and enjoy such biking trips. So I got dressed, kissed my wife good bye, loaded my bike up with my overnighter bag, kick started my bike and off I was. She sounded good and healthy and since I had left early I go some great empty roads and before I knew it I was out of the town and cruising on the highway. The route that I had decided to take was through Ranakpur, lovely winding roads running through the forest area and the soft sunlight filtering through the dense canopy of the Ranakpur forest, while still trying to come up. But before I started on that route I decided to take a quick break for some “chai” (tea). With some hot tea in my belly and feeling charged up I was off again playing with the winding roads of Ranakpur.

Catching up with friends at the Mehrangarh Fort 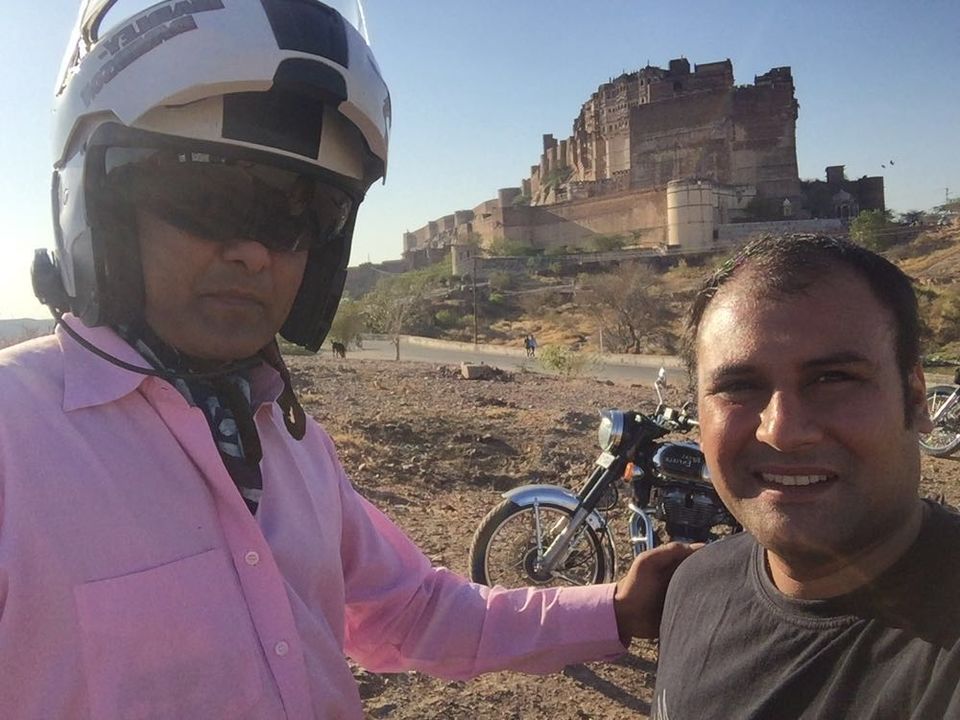 The route was lovely, the weather was great and soon I had picked up pace on my motorcycle and was rapidly approaching towards Jodhpur. On the way, about 40kms away from Pali, I called up my friend, DV, and told him where I was, he was quite excited to know that it wouldn’t be long before I reached. So after some hot breakfast and another cup of chai, I was ready for my last leg of the journey. By now the sun was strong and the day was beginning to warm up. I knew I had to cover these last 100kms as quickly as possible. So without further adieu, I got onto my bike and moved quickly to Jodhpur. 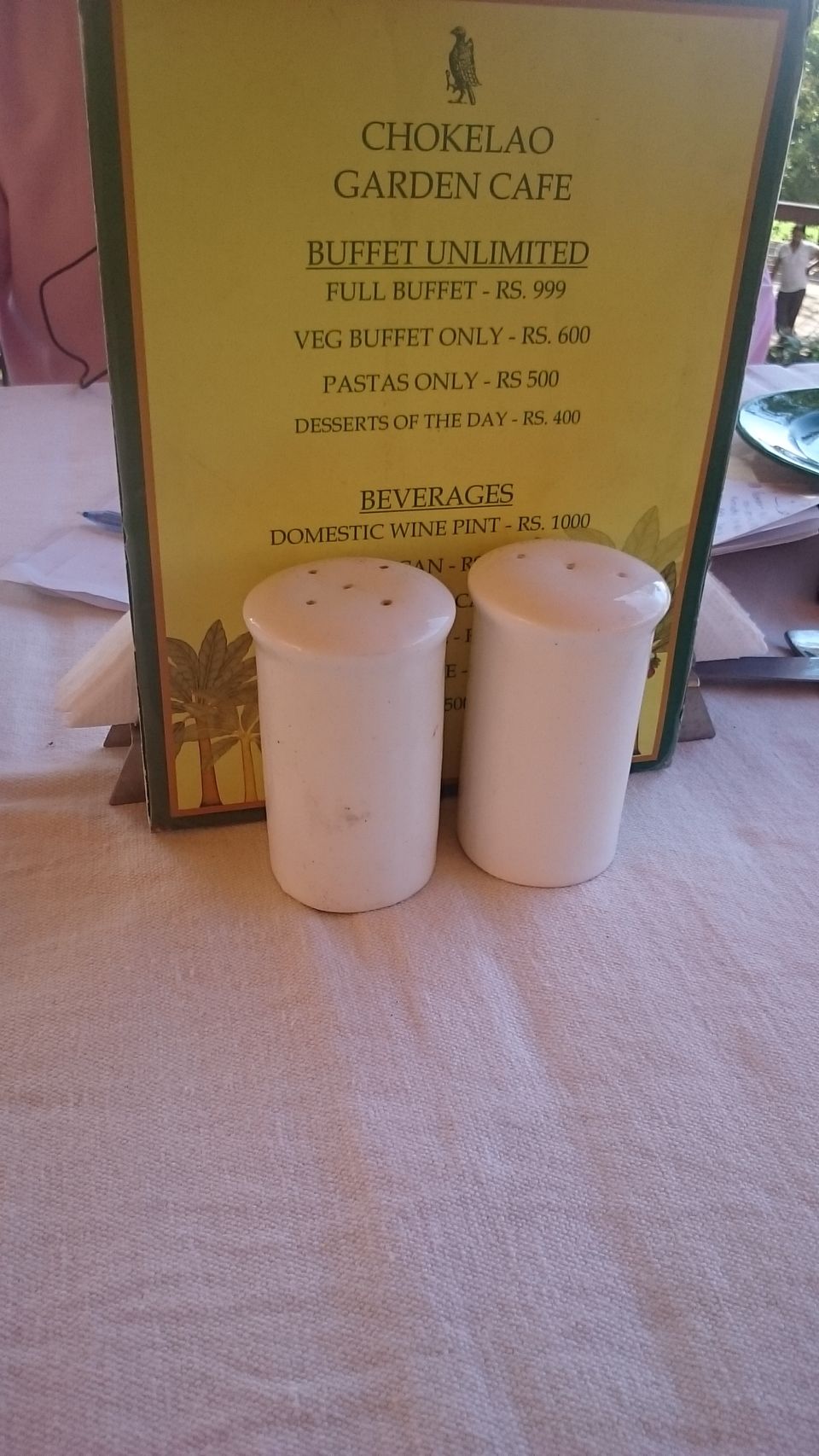 On reaching Jodhpur I called my friend and told him to come to where I was staying and from there we would go for lunch. After meeting him I indulged in yet another cup of tea and we decided to go to a lovely little cafe’ at Mehrangarh Fort called, ‘Chokelao Garden Cafe’. Tucked away within the premises of the Fort this cafe’ offers a lovely array of continental cuisines and more.

For those who don’t know much about Jodhpur, it is also called the Blue City. Its 15th-century Mehrangarh Fort is a former palace that’s now a museum, displaying weapons, paintings and elaborates royal palanquins (sedan chairs). Set on a rocky outcrop, the fort overlooks the walled city, where many buildings are painted the city’s iconic shade of blue.

This is because the old Jodhpur city, which was much smaller back in the days, had the houses coloured blue. This was not done due to some sort of superstition or an ancient belief or myth but nearly done so as to keep the heat away in the summers and the colour blue was soothing to the eyes in the hot months of the year. Besides this Jodhpur is also famous for Umaid Bhawan Palace and antique furniture, it certainly is a very beautiful city with lots to offer to tourists. 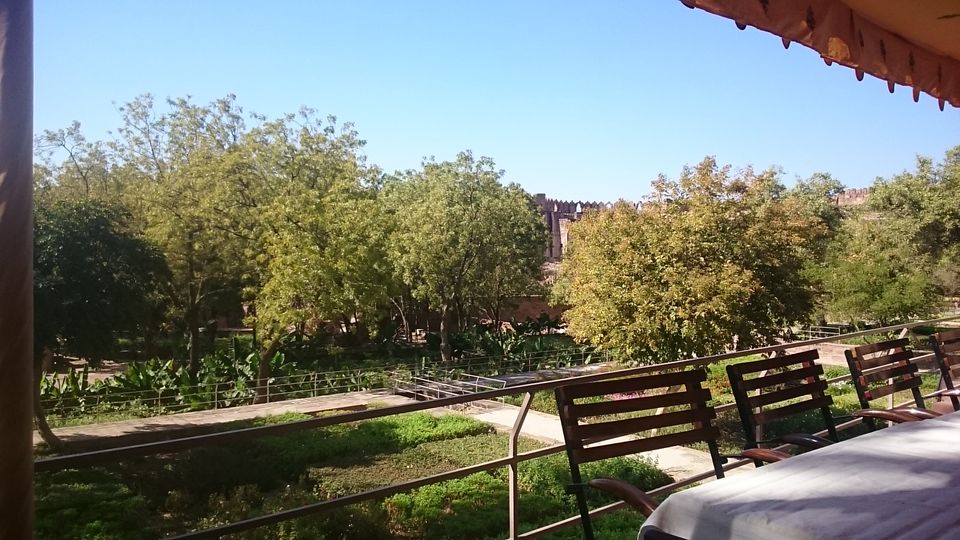 As my friend had some work, we sat down in the cafe’s serene and peaceful surroundings and ordered our lunch. While he worked, I just soaked in the ambience, my ride which I had just done and the very essence of being out, chilling with a friend and enjoying the calm and quiet of the place. It was not only relaxing but rejuvenating and refreshing. As we ordered our lunch and caught up with each other before we knew it was time to leave our lovely place of peace and quiet and head into town side.

After spending some more time chit chatting and downing some more cups of chai it was time to retire to our respective places and meet in the evening for dinner. I reached back to the comfort of my hotel room and just lay down relaxing and thinking about the day it had been and the list of events that took place that day and the only thing that came to my mind…what a day it had been.

Before I knew it, it was time to get dressed and leave for my friend’s hotel for dinner. On reaching there I was completely mesmerised by the view that I saw from the roof top restaurant. It was the view of Umaid Bhawan Palace as it stood tall, majestic and magnificent. In Jodhpur two things which one gets to see no matter where you go is the Mehrangarh Fort and Umaid Bhawan Palace. But this view was breath taking and I thanked my friend for having me there with him.

The night went away into talks of motorcycles, rides and making new friends. It was the most wonderful evening I had had and I only wondered, when was the last time I did something like this. Compared to the scotching heat of the day, the night seemed to be cool and refreshing, a typical desert climate that one gets to see in Rajasthan. Our chatters went way into the night and soon we realised that next day was our departure and it was time we called it a night.

So after our bodies full of intoxication and our bellies full of hot meal and the air filled with two biker friends and their chatter about biking talks, good nights were said, a time was decided to meet next day, I went off to my respected abode to sleep the night off and be thankful to my maker for this wonderful time that he had given to me.

Next morning was an early start, so I woke up and started my day with my fist cup of chai. Got dressed and checked out of the hotel. On the way to pick up my friend I refuelled my bike and headed to his hotel. Again under the majestic view of Umaid Bhawan we sat and had our breakfast. And as if the view was not enough we suddenly head sounds of aircraft and to my surprise saw, one of India’s elite fighter aircraft, the Sukhoi SU-30 taking off and flying over Umaid Bhawan. The site of watching this was so spectacular that one cannot probably put in words. And then another took off and then another, we just sat there watching and soaking in this wonderful experience. There was utter silence and everyone had their eyes and jaws wide open.

Watching something like this in the wee hours of the morning, when the sun is the most amazing orange in colour which is just coming up behind the magnificent Umaid Bhawan Palace and our country’s brave fly boys flying into this hue, one felt a sense of pride, it doesn’t get better than this, I thought and suddenly all the silence was abruptly broken by a nasal twang of “aree airfore station yahan pass mai hi hai na”, said the person who had just served us breakfast.

On that note we decided it was time to leave the lovely city of Jodhpur behind and head back to the hustle and bustle of our lives. But before we did that there were still 250kms of tarmac one had to cover before we really got back and I was more than excited to be riding back with a buddy. So we started our bikes and before we knew it we had hit the highway. This time though we were taking a new route back through Nadol. It was certainly a much better route and more picturesque and it was a first for me. After Udaipur was about 100kms we decided to stop for a break and have our second cup of chai which certainly was refreshing. And without wasting much time we hopped onto our bikes and cruised back home.

One didn’t realise but our journey was soon over, we were back and were standing at a cross road where I would turn for home and my friend for his. We parked our bikes on the side of the road, gave each other a hug and thanked one another for the company, the ride and the great time one had. We shook hands and looked forward to our next ride soon.