Shirdi 2- The sunset at Sakori 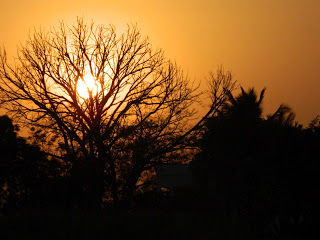 I got down from a diesel auto-rickshaw in Rahata, a village five kms from Shirdi and started walking on a dusty road towards Sakori. After a walk of thirty minutes through the hustle bustle of a crowded haat(weekly village market) of the village, I reached Sakori.

Sakori is a small village far from the din and pandemonium of the cities with pucca houses, few huts, lot of greenery,roads checkered with grey and brown paving stones with patches of a green veneer of cow dung on them. Sakori is one of those villages where life moves at a snail's pace, awakening at dawn and sleeping by nightfall. I reached the village couple of hours before dusk and already the village was ready to go back into slumber. " Where is Upasani Maharaj's samadhi,"I asked a villager in Hindi, who was in white dhoti and white kurta and the characterstic Gandhi topi, sitting on his haunches and sipping tea in a small village tuck shop. He replied in Hindi with a strong marathi accent, squinting his eyebrows to avoid the slanted rays of the sun hitting his eyes, " Bhau!, go round the corner, you will find an alley, to the end of it stands his ashram and samadhi."

Entrance to a unique ashram 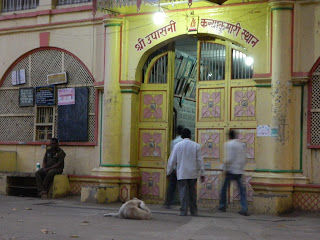 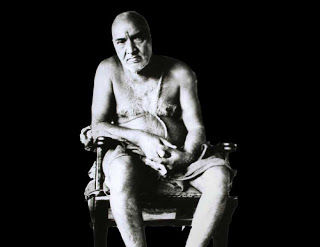 As I ventured into the alley flanked by houses on both sides, I saw the photo of a man in his seventies or eighties, tall built, having large expressive eyes with a serene and unflinching gaze, slight stubble of grey hair, long nose and a big belly, sitting in a wooden chair; adorning the facade of every house. He was none other than Upasani Maharaj himself. After walking around hundred metres, I reached a very vintage building with 'Sri Upasani Kanyakumari Sthan' written on it in a semicircular fashion. Outside the ashram were a group of village ladies sitting with bamboo baskets selling loose flowers and garlands to be offered at the samadhi. I found the security guard of the ashram very amicable as he took me around and showed me the whole place.

Entrance to the Ashram 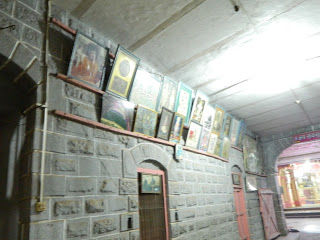 As I entered the ashram through a small lobby I was able to see pictures of all the saints, sages and avatars adorning the walls on either sides. One which caught my attention was a young photo of Bhagwan Sri Satya Sai Baba placed first in the long line of photos. After crossing the lobby, I was ushered into a small patio where the wonderful life story of Upasani Maharaj is displayed on a notice board, half of which has got erased due to poor maintenance. Upasani Maharaj was a direct dispicle of Shirdi Sai Baba. He was made to undergo intense sadhana by Sai Baba to attain perfection. He was made to sit in the Khandoba Temple for five long years without doing anything. Upasani Maharaj, a man used to intense activity was totally new to such austerity. His mind revolted and he even tried to run away many times but the sheer magnetism of Sai Baba pulled him back. After a churning of nearly two years his mind started accepting this new found aloofness and started going inward. By the end of five years, Upasani Maharaj became an adept and even Sai Baba came and acknowledged sainthood of Upasani Maharaja by coming and bowing down to him. Adjacent to the patio is a beautiful bhajan hall, where the brahmachrinis were doing bhajans in front of a big picture of Shirdi Sai Baba and Upasani Maharaj transporting all into bliss. Juxtaposed with the bhajan hall was His samadhi. The atmosphere near his samadhi was ethereal and sitting there for some time made my mind indrawn. Upasani Maharaj came to Sakori and started a small ashram where all the worship is done by ladies right from pooja to yagnams. But after the mahasamadhi of Upasani Maharaj and Godavari Mata, his direct disciple there has been no more new entrants in the ashram. There was an air of melancholy and uncertainty on the faces of the old ladies taking care of the ashram. I felt that all of them were having the feeling of insecurity gnawing into their minds due to lack of young blood in the ashram. It was an unforgettable experience to witness the place hallowed by this illustrious sage, but the eyes of the old inmates was causing some uneasiness . My judgement regarding the ashram might be wrong.

I came out of the ashram with these mixed feelings when I witnessed the silhouette of a withered tree with the setting sun as the backdrop. I have witnessed many sunsets but this sunset was different from any other sunsets I have witnessed; was this sunset symbolizing something. I pray it does not.