Somewhere near Fort Canning Park, we lose our way and ask a few Singaporeans for directions to the nearest metro. A chatty old lady invites us to come along, as she's headed there too. "Where are you going?" she wants to know. "Haw Par Villa," I say, hoping I've pronounced it correctly. "Haw Par Villa? There's nothing there!" the lady says dismissively. "It's just an old park." She proceeds to suggest a long list of places that we've already been to or have no interest in visiting. Fortunately, the metro is right in front of us; so we thank her and go to Haw Par Villa anyway. 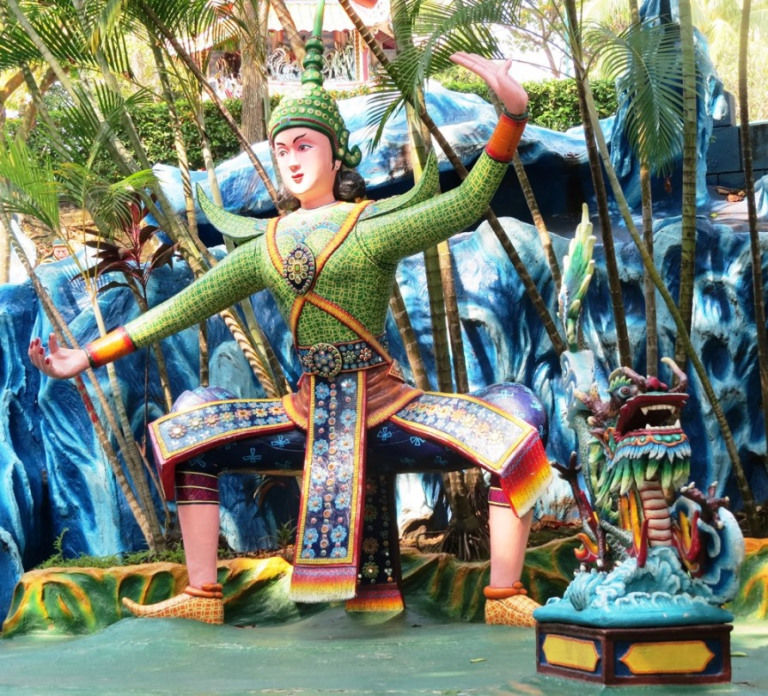 The place owes its name to two Burmese-Chinese brothers - Aw Boon Haw and Aw Boon Par, who built it atop a hill as a venue to impart teachings about traditional Chinese values.

The 'villa' is a part of the theme park, commissioned for Aw Boon Par, by his doting elder brother. The sheer size (eight acres) and scale of the park shouldn't come as a surprise, given that the Boon brothers were the sons of the man who came up with the famous Tiger Balm. Even today, statues of tiger cubs grace the entrance courtyard, along with a car that sports a tiger's face on its bonnet. The story goes that the brothers first built these 'Tiger Cars' in 1927 to make it down the hill quickly. Eventually, they became excellent marketing mediums for the Tiger Balm brand.

The park's history is as long as the legends that shroud its present. Featuring several macabre, larger than life sculptures and scenes from Chinese folklore and mythology, it's inevitable that tales of ghosts and hauntings abound.

A ram and serpent look at you askance 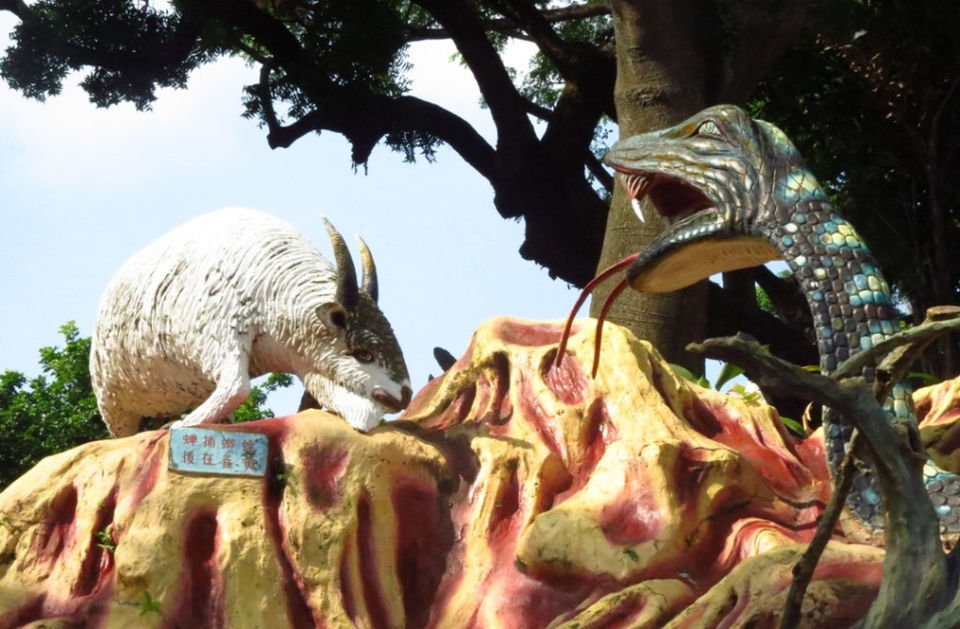 The eerily realistic Ten Courts of Hell have even led some to believe that Haw Par Villa is the gateway to hell on earth. If that were true, it would be a scene straight out of the popular television series 'Supernatural'.

Just like the Singapore Botanical Gardens, Haw Par Villa is right outside the metro station that goes by the same name. I arrive there on a sunny afternoon and squint at the curved Chinese-style entrance with a tiger carved above the name of the park and dual-coloured twisting manmade masses to my right, masquerading as rocks. The path leading up to the gates is lined with the same twisting rocky walls, creating the illusion of having already entered the park. 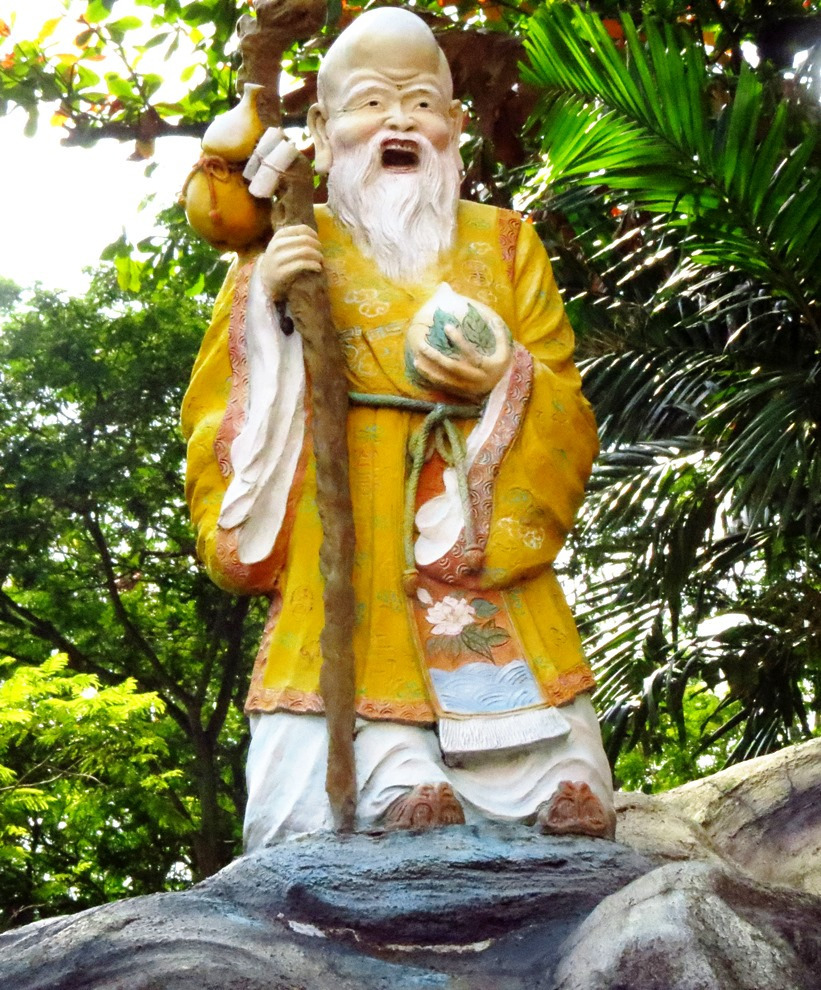 A forbidding statue of an open-mouthed Chinese saint with contrastingly calm eyes makes for a strange sight. Further on, a ferocious serpent and a ram carved to perfection, gaze at you askance. You get the distinct feeling that the creatures in the park aren't quite inanimate. Some say that the statues at Haw Par Villa are actually corpses encased in wax. True or not, the night-time guards feel safer leaving peace offerings of food items in front of the most dreaded ones.

Once inside, the walkway inclines upwards, lined with three-dimensional graceful figurines within colourful pavilions that are sometimes topped by Goddesses with knotted hair. The giant statue of a rotund laughing Buddha dispels the gloom somewhat. Come here at night and I have no idea what creatures you might encounter. Perhaps that's why, the gates shut at dusk.

A laughing Buddha dispels the gloom 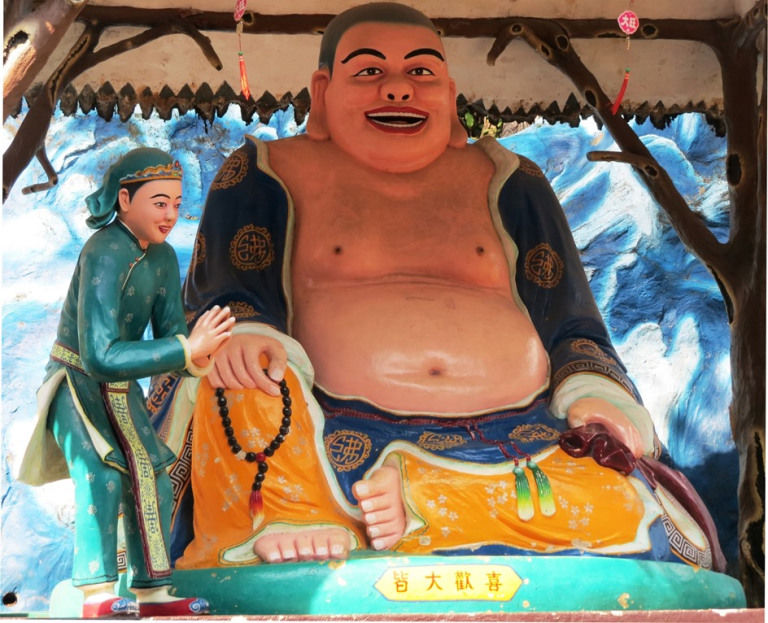 We reach a fork in the path where we can continue upwards or turn right towards the garage and the famed Ten Courts of Hell. With a prickly feeling at the back of my neck, I choose hell. A fantastic dragon sculpture painted in gold holds fort at the entrance. The first thing you see as you enter are the suffering heads of sinners mounted on a hillock; the red paint of the blood oozing from their eyes as fresh as yesterday. 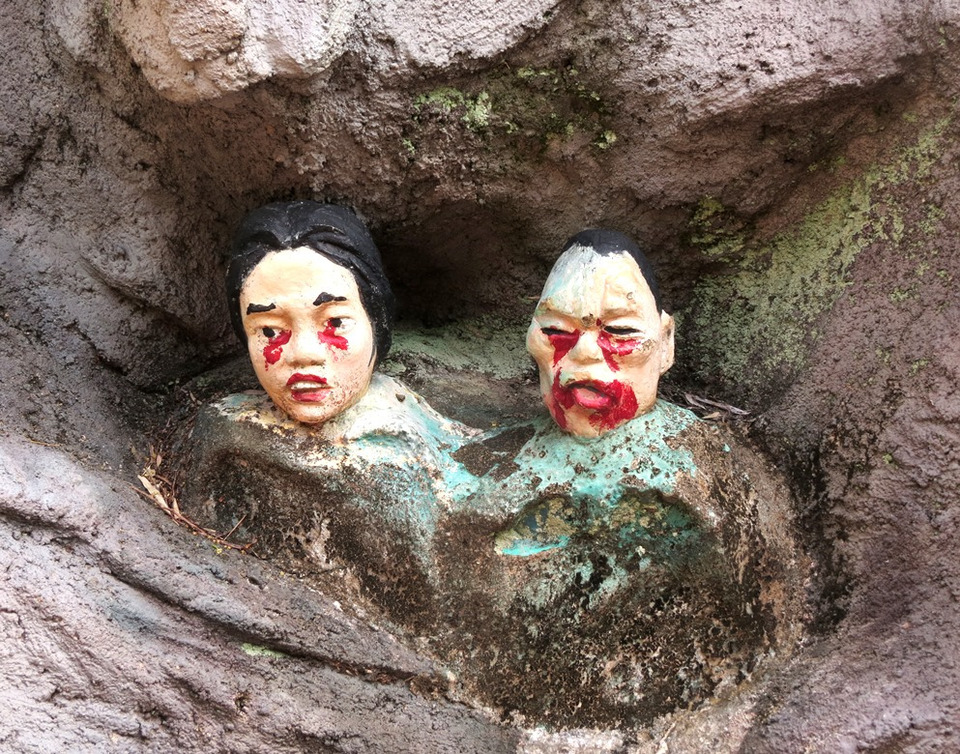 Then, you come upon the frightening form of Hu Fa Shi Zhe, upholder of the laws of the Ten Courts of Hell and controller of ghosts and devils. This is one man you don't want to cross.

In the next cave-like structure, the God of Earth is seated on a green leonine beast, his shawl patterned like a brick wall. But all these sights are just to prepare you for the tunnel labelled 'Ten Courts of Hell' and guarded by two men with the faces of an ox and a horse. A placard advises parental discretion due to the graphic nature of the exhibits within. I can imagine coming here as a child, consumed by morbid curiosity and insisting upon being taken inside.

The Ten Courts of Hell

A story unfolds as you pass through the tunnel, beginning with the Golden Bridge, which marks the passage to afterlife, a man on his knees, desperately pleading for mercy and then, the ten courts of hell for ten different sins, ranging from murder to deceit, thievery, envy and lust. In one scene, men are being flogged with ropes and in another, they are being made to lie on burning hot coals. There are sinners being impaled on spears and others being made to hang upside down.

At any moment, his spear may rise again 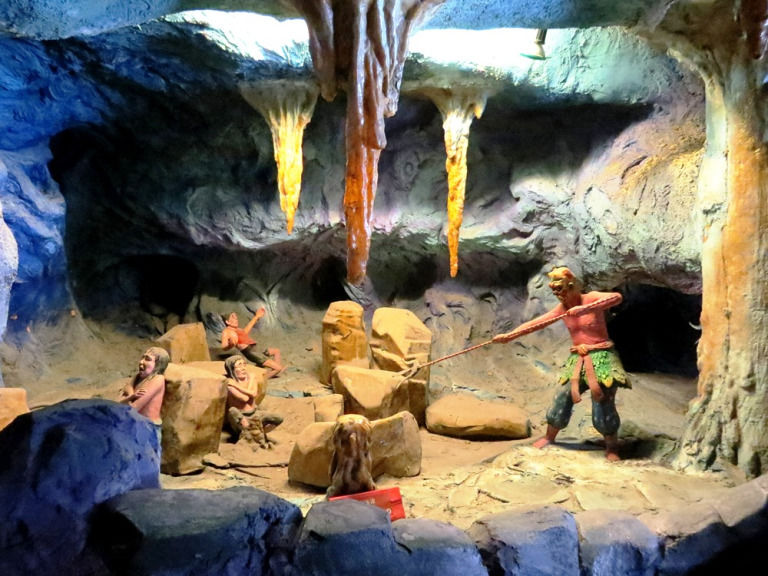 What makes these exhibits even more gruesome is that none of them are static - they are all frozen in motion, as though any moment, the tormentor might raise his spear again.

Garish lights add to the nightmarish quality, with the spotlight often trained on the sufferer's features. Beheadings and nails being driven into sinners' shoulders follow, all overseen by the stoic judge or giver of punishments. The courts depict men and women, both young and old. No one is spared the consequences of their deeds on earth.

A sinner hangs upside down 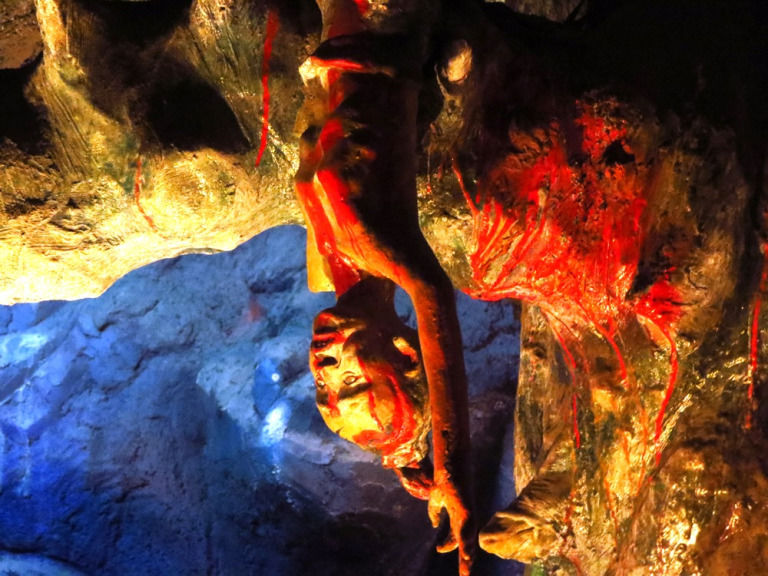 You emerge from the tunnel with a definite resolve to tip the scales of karma in your favour. The sunlight that greets you once again violently shakes you out of the daze induced by those hellish scenes. You witness odd sights like kissing arachnids and an old woman being nursed at a young mother's breast and you wonder what they mean. Numerous scholars have endeavoured to demystify the lifelike figurines at Haw Par Villa, but a few remain unexplained.

As you leave, you come upon the Tiger Cars with their protruding fangs and copious whiskers once again. 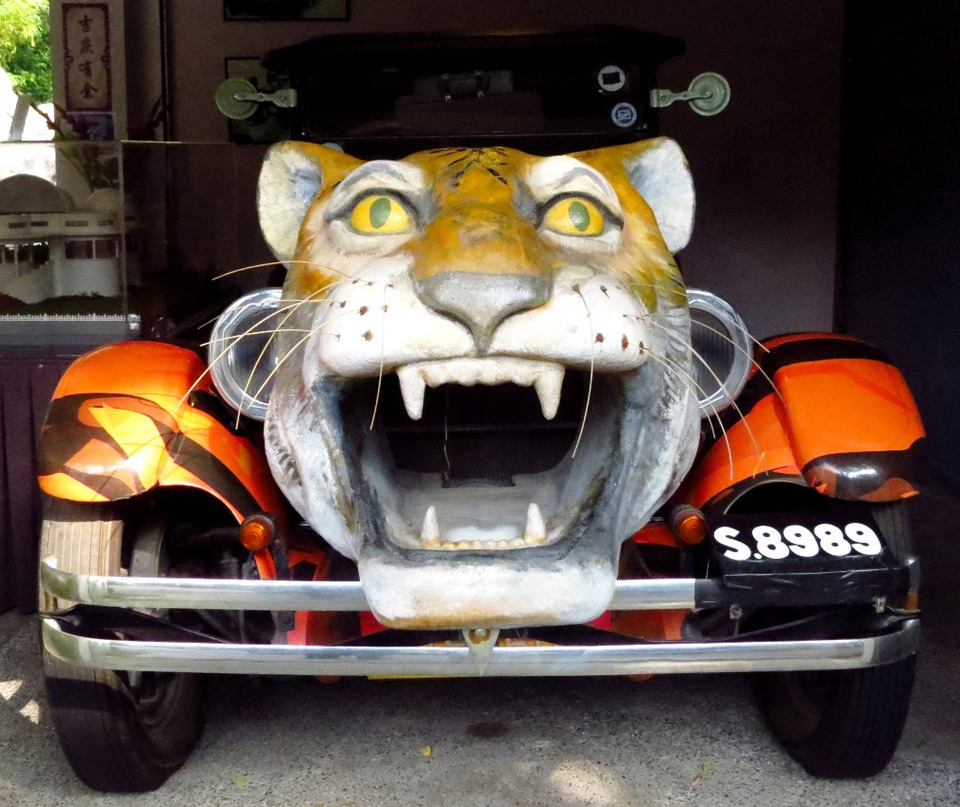 In a quirky touch, the Boon brothers had the cars designed such that the honk resembled a tiger's roar.

Part of you wishes that you could pull the horn just once. But it's time to bid goodbye to the secrets of Haw Par Villa, where perhaps, a lingering scent of Tiger Balm permeates the air in those late hours with none to smell it but the hapless guards.

This blog was originally posted on Trail-stained Fingers.