While subways are always a great way to discover a city, Stockholm Tunnel-bana raises the bar and how! With a total length of 110 kilometers, it is arguably the world's longest art exhibit. Bright red and green grottos at Solna Centrum, Cloud speckled sky blue cubes at Solna Strand, Super Mario mosaics at Thorildsplan, Blue motifs at the T-centralen.....each stop in Stockholm has an interesting tale up its sleeve. Do keep this joyride on your list of things to do in Stockholm. More than 90 stations boast of artwork! I picked up five stations for my art tour.

SL Travel Cards give you unlimited free rides for 24 hours, 72 hours, or 7 days of travel in the Stockholm metropolitan area.

T-Centralen is the central hub of Stockholm’s subway with three subway lines starting here. As old as 1957, it was the first station to feature artwork. Artist Per Olof Ultvedt painted the cave- like blue line platform in blue motifs of flowers and creepers. The color blue was chosen to lend a calming effect to a commuter - busy station. 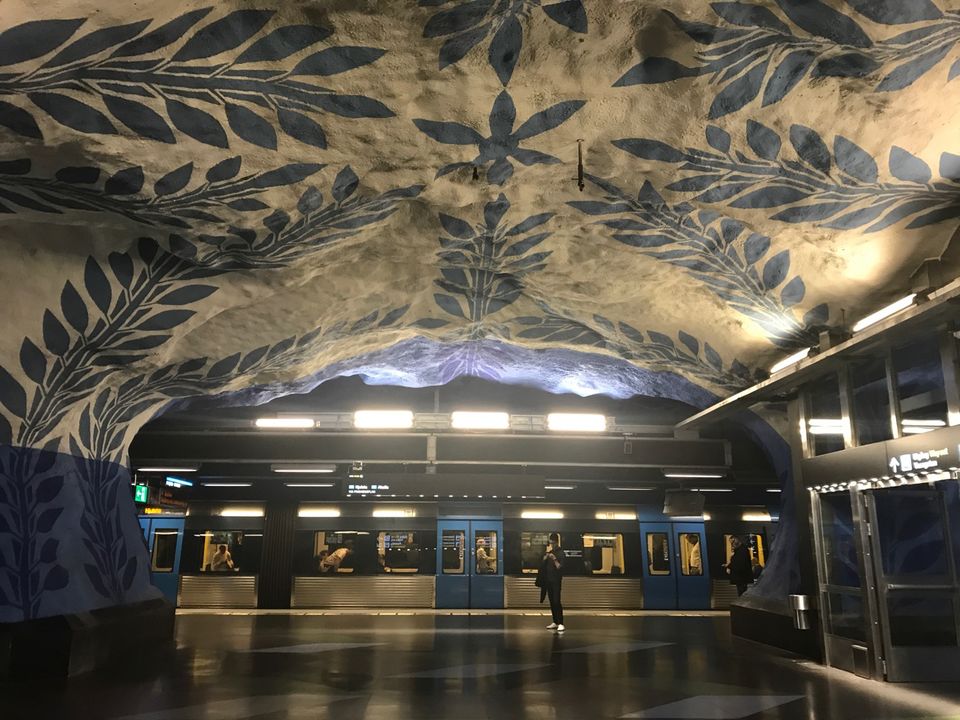 Take the blue line to Kungsträdgården

Kungsträdgården or "The King's Garden" was once the site of a royal palace and a French Garden. After being burnt down, it was used by the military for a while before being converted into a public park by the Stockholm city council. The station lie directly before the mark and is among the most photographed sights in Stockholm. 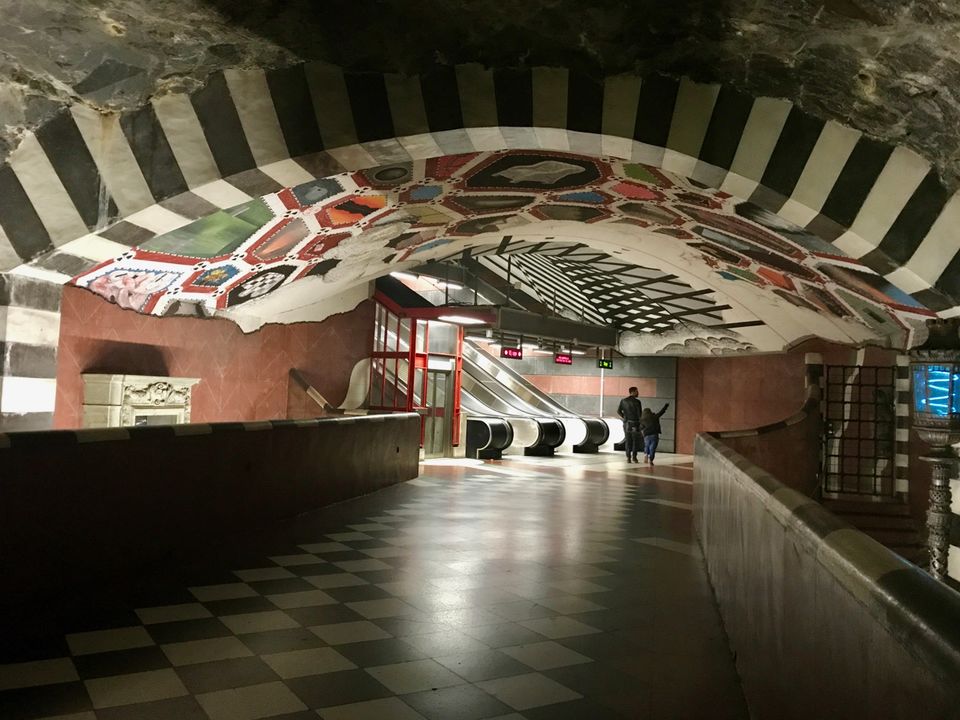 Painted in vivid shades of red, white and green, the art creates a sense of spectacle and drama. 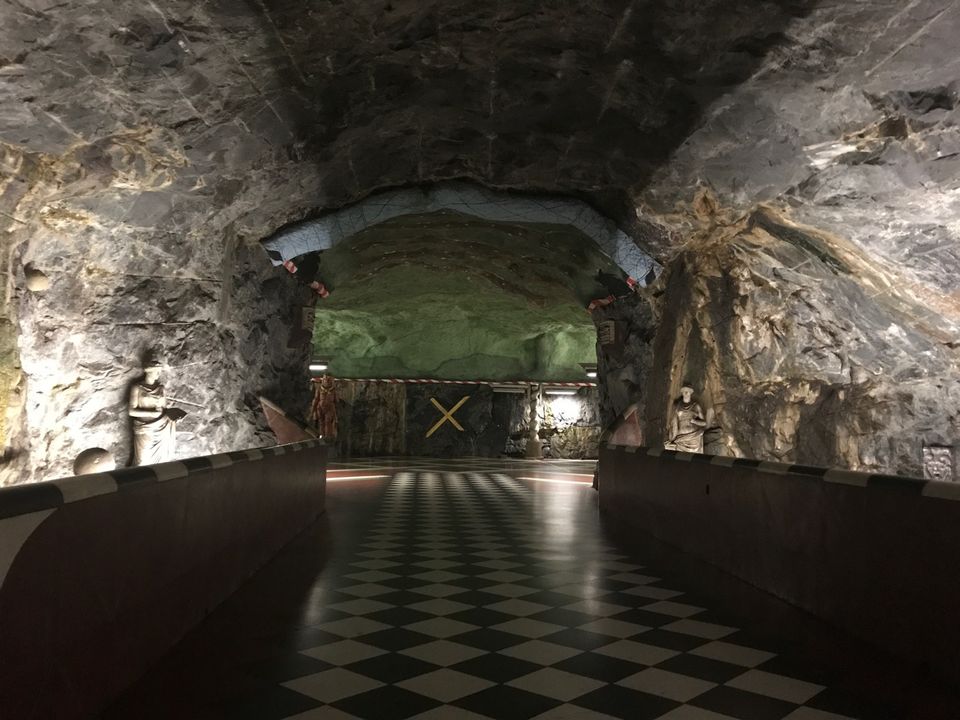 Continue on the blue line to Solna Strand (towards Hjulsta)

Takashi Naraha - a Japanese artist, presents an interesting display of ying and yang, with objects mirroring the open blue skies. 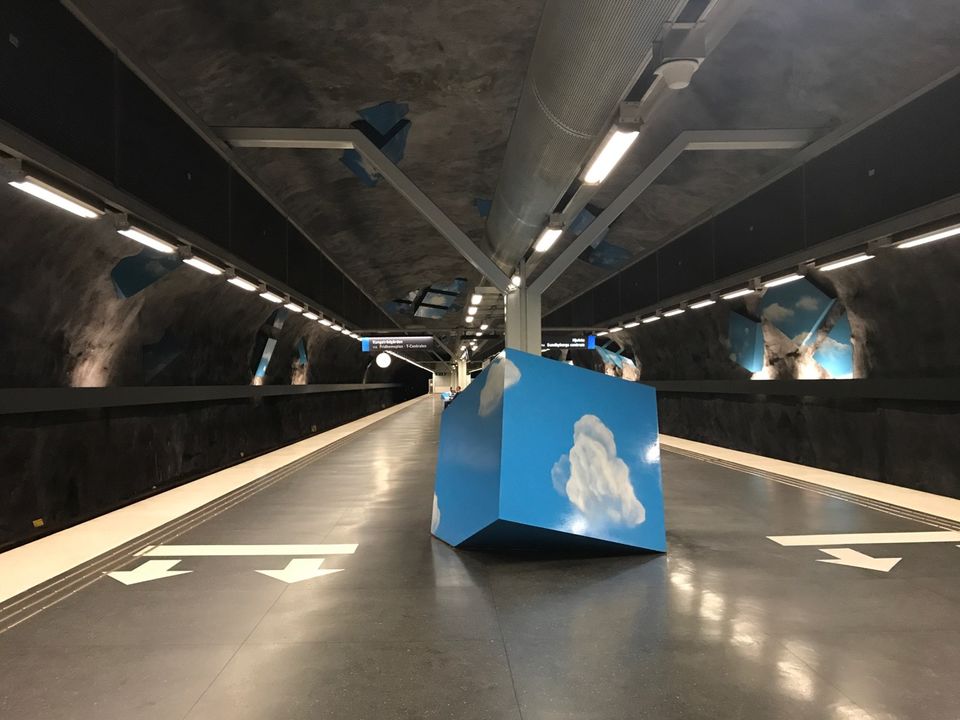 Blue cubes with clouds painted on them are placed on the platform aisle as well as the ceiling. 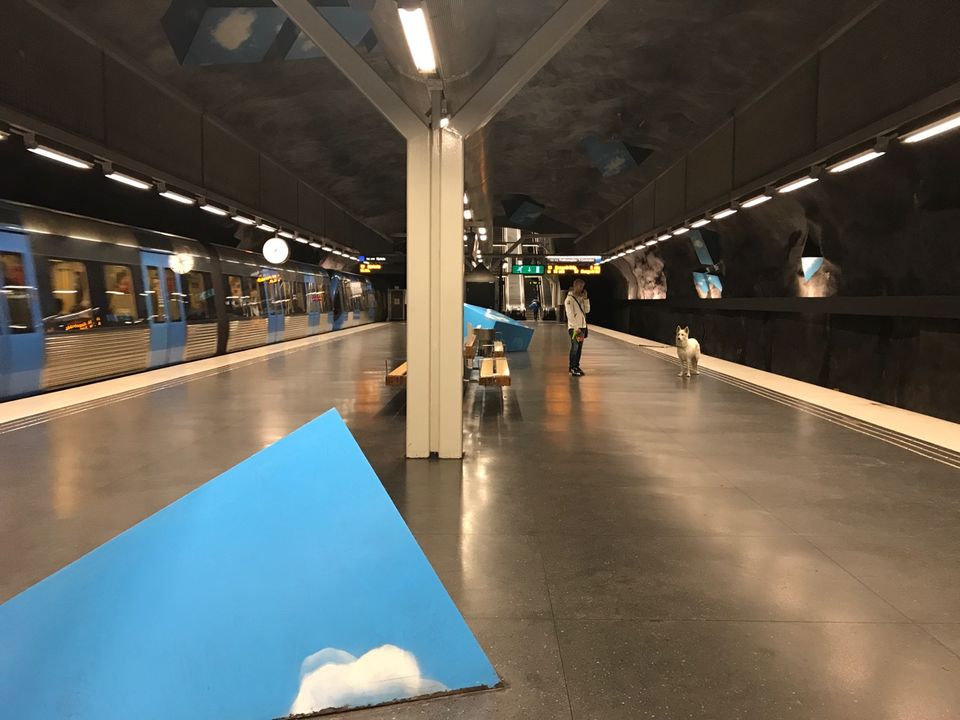 This station is the pick of the lot. Artists Karl-Olov Björk and Anders Åberg present a strong commentary on the conflict between man and nature. The bright red and green colors are symbolic for forests and the evening sun respectively. 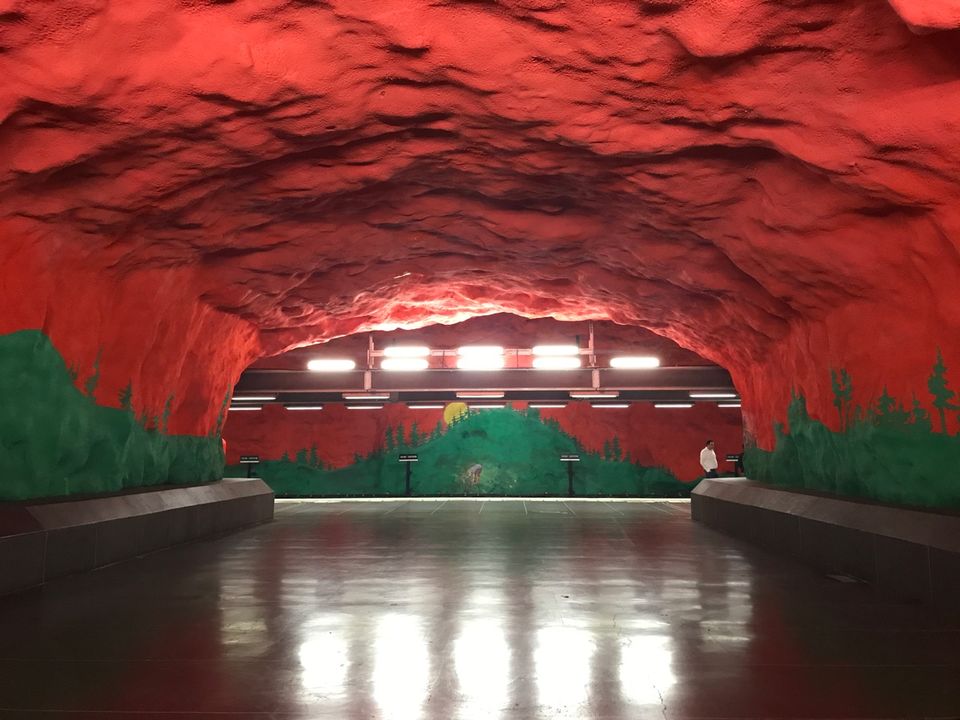 A lot of detail has been added on the walls to reflect on how humans are destroying the environment through deforestation, automobile pollution et al. 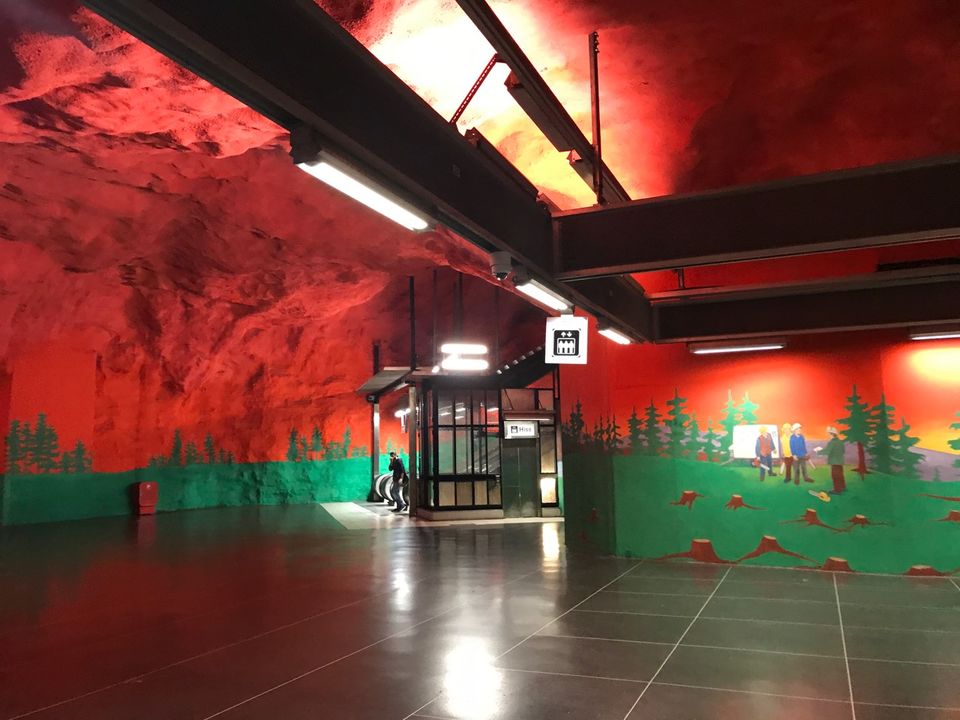 Return to Fridhemsplan on the blue line and take the green line to Thorildsplan (towards Alvik, Akeshov or Hasselby Strand)

This street level station is the cutest! The pixelated art by Lars Arrhenius pays an ode to Super Mario. 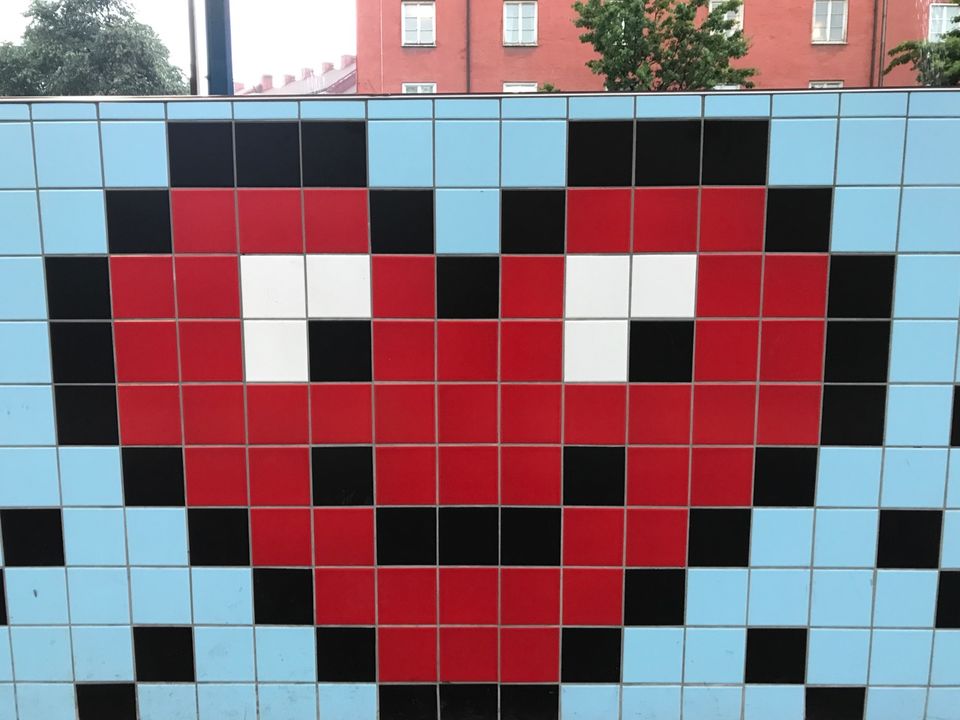 You can see clouds, projectiles, hearts drawn in a style reminiscent of the popular video game. 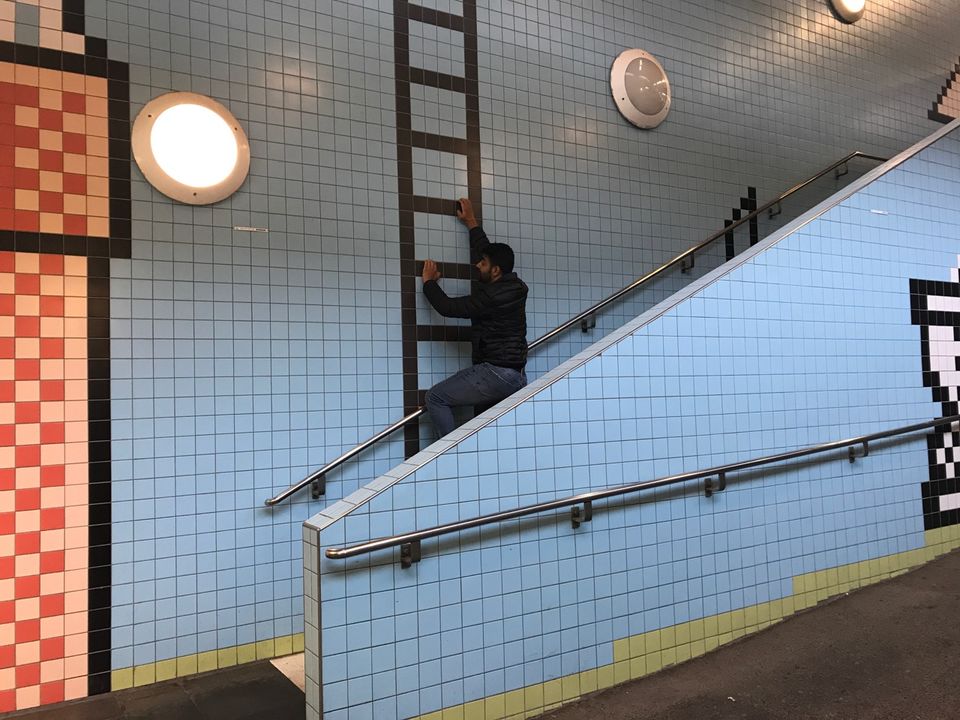 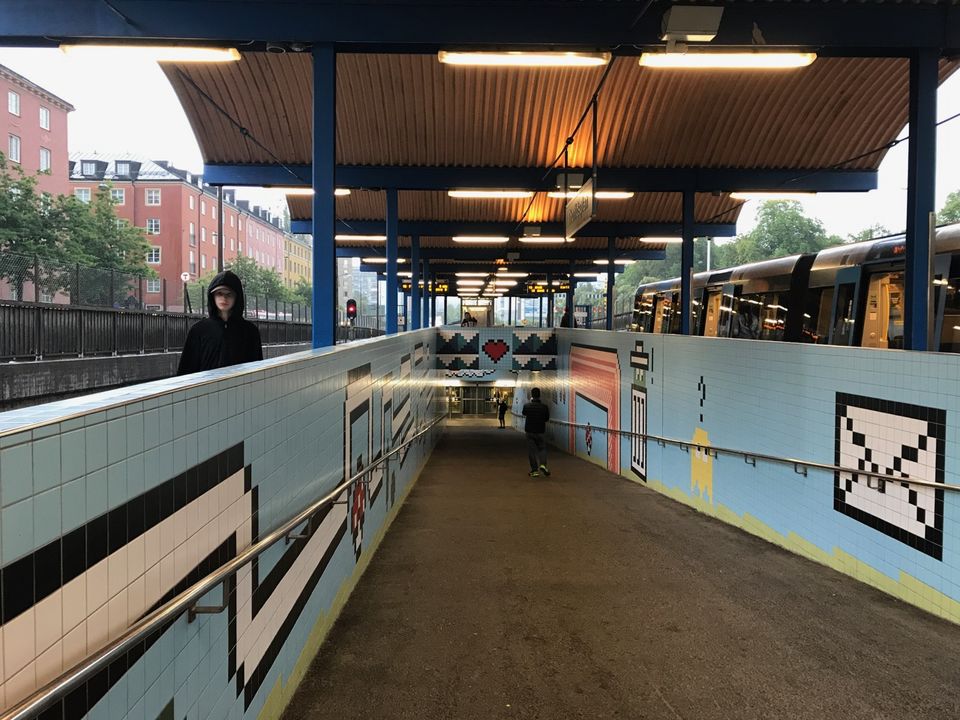 Guided art tours of the Stockholm Tunnel-bana are available from June to August. And they are free! You can enquire at the SL Information Centers.