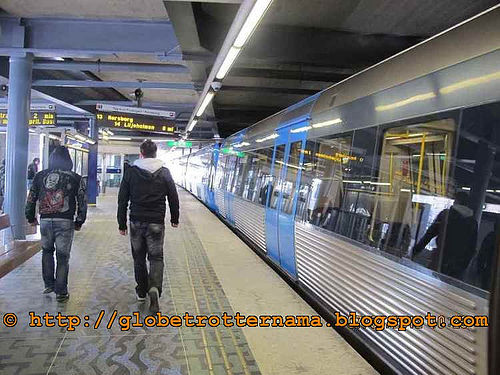 Before, I begin let me warn you, as I always do. This is the first of the four part series of long posts, about my trip to Stockholm, Sweden.

The beginning and the plan.

From the time we had come to Finland, we were planning a trip during the Easter weekend (long weekend). The names that came up was Lapland (Northern Finland), Stockholm, Norway and Switzerland. But almost all of the trips got dropped as they were turning out to be way off budget. Then we got the news that one of our friends from Bangalore was in Stockholm. The fact that we did not require to pay for accommodation made the trip lucrative. Coupled with it was the prospect of travelling to Sweden by cruise ship made the trip irresistible. So, once the mode of transport was decided, I began searching for cruises to Stockholm from Finland and found that there were only two competing companies, who operate between these destinations. Looking at the pros and cons of both we decided to try both the companies. That is go by one return by the other.

My friend in Stockholm, requested me to chart a tour plan for the 3 days that we were supposed to spend there. While I was researching, the first fact that overwhelmed me was, Stockholm has more than 80 museums and places of attraction. This made my job extremely difficult (I think you can imagine). Let me tell you that, for visitors, there are a lot of tips, accurate and official information about Stockholm available online. This helped me in getting a meticulous plan in place. After all the parties agreed to the plan we were ‘ready to go’.

The journey to Stockholm.

We are in a city called Pori and nearest city from where we can get ships to Stockholm is Turku. And as per plan we were to take the Viking Line ship M/S Isabella to Stockholm. We reached Turku harbor about two and half hours earlier. After a quick check-in we were waiting at the terminal. As we were hanging around in the lobby I spotted a huge, humungous ship approaching the terminal slowly. As it came closer we spotted its name. It was Viking Line M/S Isabella, our ship for the night. As the ship docked we got ready for boarding. Thirty minutes later they started the boarding process. On the entrance to the ship a boy and girl were performing Caribbean dance. Oh! Did I forget to mention that Viking Line was celebrating Cuba festival in all their ships? Yes, they had given everything from food to entertainment a Caribbean touch. After we were inside our cabin, we freshened up a little bit and then headed for the dinner. We had booked buffet dinner, which was a grand affair, with a wide variety of fish, chicken, ham, game meat (reindeer), desserts, ice-cream etc. My long time wish for tasting deer meat was finally fulfilled.
After the sumptuous dinner we went around the ship to explore different sections like restaurants, tax-free shops, club, disco et al. Then we moved to the ‘sun deck’, it was dark and nothing much was visible outside. Yet the mild sound of ship’s engines, the view of the ship chipping through sea and the chilling winds created an out of the world experience. Though the night was still very young, actually it was just beginning, we decided to retire into our room. We were told that most of ship’s passengers would be youngsters looking to ‘have fun’ on the ship. I must admit it was quite correct. So, if you are travelling with your family it may be little disturbing at night.
Next morning we were up early and quite excited. So, we walked up to the ‘sun deck’, to greet the morning sun but to our dismay, the sky was overcast with light showers washing the deck. One gentleman, let out the last puff from his cigarette and said ‘It’s going to be like this the whole day’, shaking his head with disappointment. Yes, the weather looked really annoying. The ship was entering the harbor and all the passengers were requested to proceed to de-boarding area.

After reaching the harbor, our friend instructed us to reach Slussen the nearest T-Bana (Metro) station. We had to take a bus to city center (a service run for the benefit of passengers using Viking Line) that went via Slussen. He said he would come and pick us up from Slussen. After waiting for a while, our friend came and we went to his house.

The original plan for the day was to take some rest and have breakfast at my friend’s place. Then go to Stockholm tourist center for the Stockholm Card and other queries related to various places of attraction. From there, we were to take the 3-hr Archipelago tour conducted by Stromma. Like, I mentioned earlier the weather that day was really dampening. So we had to drop the plan of theArchipelago tour and reserved the day for shopping and going around in general.

As per the revised plan, we had brunch and set-off for the tourist center. Now let me mention here, the tourist center is near T-Centralen(Central Metro station, it’s here all the metro lines cross each other). It’s little difficult to find the place, as there are no signs or markers for tourist center in T-Centralen. But, if you ask around, the friendly staff and stall owners in that area would guide you. So, after asking around we reached the tourist center and got quite good amount of information. And let me mention that alongwith Stockholm card, you get a map, a book of information about the various attractions and list  with opening hours for all the places of interest.
Rest of the day was spent going around different places for shopping. Like Kista (on blue line metro towards Akalla) a store named Kista Grossen for Asian/Indian grocery, then largest IKEA store at Skärholmen for furnishing items etc. After shopping bags full, finally we end the day by returning to my friend’s apartment.

Few words of advice:
If you are having more time, like 2-3 days in Stockholm then getting a Stockholm card would be a very good deal. It gives free access to all major museums and attractions, free access to public transport and much more. Otherwise you can take hop-on hop-off-combi bus tour conducted by Stromma.