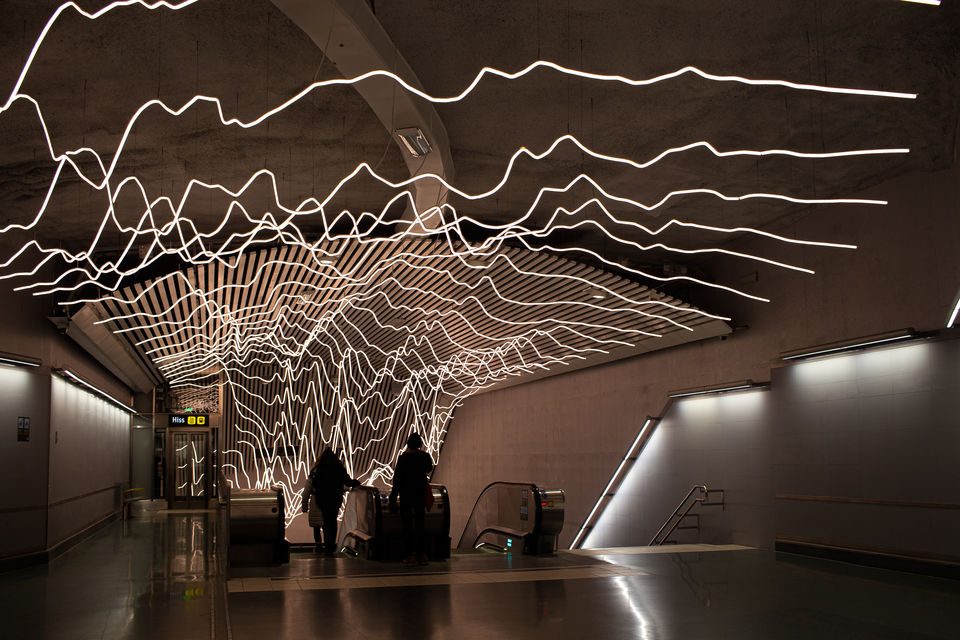 This Blog is about exploring underground world of Stockholm. This city is known for culture and the art that has been developed at different stages in the previous eras. the parts of city describes the stories of those revolutions and their timelines. The city is a cluster of many islands and made communicable along the time through many ways of transport be it the fancy and cultural roads or the metros and tunnels.

One part of the art is hidden underground in not just one corner of city but is widespread in different parts and outskirts of city too. The art developed by some artists on many metro stations specially underground by cutting the rocks and painting them for a theme to describe the uniqueness of that particular area of city.

In total there are some 20 stations but I could visit just 7 of them due to short of time. I shortlisted the ones I waned to see from the maps I had of the city. Since I was on a trip, I bought a city pass for the city which included not only travel but also alot many entry passes to various sight-seeings too. it costed me just Rs. 7000 for 2 days of trip.

His idea- blue color together with simple motif - stylised flowers and leaf creepers - give passengers pause and a chance to clear their minds and have a great day. The entire platform was painted with this theme as this is the main station of the city and highly crowded too.

Art by Åke Pallarp and Emni Hallek. This station is one of Stockholm's first cave station.

The idea was to being the sky underground and also reminds passengers of Stadion's significance in sport's history, still one of Stockholm's great arena and regularly hosts sports events and concerts.

The bright green and red landscape- the green being the forest and red an evening sun setting behind the treetops - both timeless in its beauty. The addition of paintings later to the plain walls illustrated some of the most debated social issues in 70's era Sweden; the environment, over logging of the forest and the depopulation of rural areas.

The eye-catching Concept by David Svensson - "LIFE LINE" with white lines of flourescent light, shining bright in the tunnel. 400 m of LED in a shape inspired by the heartbeats of the artist's son, as shown on the CTG- montitor during the childbirth.

Near on if Stockholm's oldest public parks meaning 'the King's garden' with a loads of historic importance. The art on station tells the story of the site above ground. The color scheme- red, white and green - is a reference to the old French formal garden.

Art by Lennart Mörk is a celebration of scientific advances and discoveries. The five regular polyhedral located on the platform are one of Plato's five elements: fire, water, air, earth and ether. Also the walls near them were also painted with the similar element.

By Artist Gösta Wessel and Karin Ek. They wanted toemphasize the changing landscape on a journey. The color scheme is light and almost subdued which creates an optical illusion as the tiles change the color depending on where you stand on the platform.

So, here were the 7 most amazing and my favourite Subway Stations in Stockholm with the story behind their art and the message of the Artists. These are worth a visit if you are in this city and are amazing to learn about their arts and experience them.