Texas Travel GuideTexas TripsFootprints On Ice: A Memoir Of My Antarctic Travel

Footprints on Ice: A memoir of my Antarctic Travel 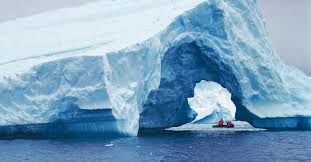 "White and Wild" this is what one sees in freezing cold standing against harsh wind cutting across the soul and hitting the ice shelves.

No other place on earth compares to this vast white wilderness distilled to an elemental haiku: snow, ice, water, rock. Antartica invariably heightens feelings of humanity’s insignificance and nature’s grandeur. Is peculiar beauty may haunt one for the rest of one’s life.

Glaciers struck a chord in me. For a long time they were those things up there on those mountains. But exploring my first glacier, listening to the ice, seeing the hourly changes, the perceptible breathing in and out of the ice, the roar of the water coursing through just under the surface—it started to make sense to me in a way that is regrettably hard to explain.

I started my journey from Delhi and after a long lay-over in Dubai I boarded a 20 hours long flight crossing many continents to reach Buneos Aires, the colourful heart of Argentina known for its music, Tango, street art and food. Sexy and alive the city gets into your skin.

From Buneos Aires, I flew to Ushuaia, the southern-most city in the world and from there I boarded the ship Ocean Endeavour to the White continent of Antartica along with 80 other exceptionally brilliant individuals chosen from 32 nationalities, all with the common mission of creating sustainable communities in their respective countries to combat the effects of Climate Change.

Cabin 532 of Ocean Endevaours became my home for next few days away from the known world. Plain white walls, a desk, a cupborad. It was a shared cabin. A wooden bed built along the wall opposite the desk. The bedding, to my delight, was all white. Adjacent to the door was a small washroom. Nothing else.

Out beautiful ship had a variety of cabins, a window-walled observation deck and lounge stocked with piles of cookies and a coffee/tea & cocoa machine, a small library with reference books and Antarctica-themed stories, a huge dining room, lecture halls, and a vast amount of storage area for things like zodiacs, kayaking gear, tons of fresh fruits and champagne.

After a smooth sail through the Beagle Channel, our ship took a sharp turn at around midnight heading South, straight towards the Drake Passage. It is a 1,000 km long journey and it approximately takes 48 hours to cover in good conditions. The Passage connects the southwestern part of the Atlantic Ocean with the southeastern part of the Pacific Ocean and extends into the Southern Ocean. Highly unpredictable, violent, chaotic it takes almost two days to navigate a large, motorized ship through the passage, This condition is commonly referred to by Antarctic-bound passengers as “The Drake Lake”. Many of us felt bad sea sickness during this time.

The next morning, we all set our eyes on the raw landscape of the far Antartic peninsular. A land that has never seen civilization, never witnessed war, that is near untouched by modern development, and where wildlife still roam free from the fear of man.

A melting pot of backstories, and expectations soon fade into perspective under the sheer scale and pristine detail of Antarctica. Exploring fur seal coated shorelines and standing side-by-side with yakking colonies of penguins, has left many of the participants with a sheer “words will not do justice” mindset.

In Antartica, the valleys are collectively referred to as the dry valleys. It has not rained here in two million years. No animal abides, no plant grows. You look in vain for any conventional sign of human history- the vestige of a protective wall, a bit of charcoal, a discarded arrowhead.

Nothing. There is no civilization, history, until you bore into the layers of rock or until the balls of your fingertips run the rim of a partially exposed fossil. At the height of the austral summer, in December, you smell nothing but the sunbeaten stone. In a silence dense as water, your eye picks up no movement but the sloughing of sand, seeking its angle of repose. It is a difficult landscape to enter, and to develop a rapport with. It is not inimical or hostile, but indifferent, utterly remote, even as you stand in it. The light itself is aloof.

The indispensable connection for me lies with the open space.

In the great wilderness of the continent, it is the solitude and the emptiness that envelops one and bring one down to scale.

Not that solitude is the first thing that comes to mind when you’re standing in the middle of a penguin colony on an Antarctic shoreline. Penguins are by no means the only stars of the show here. Most exciting of all, though, were the whales. As the call went up from the bridge – “Humpbacks!” – we spotted three of them leaping from the water beside the ship - their magnificent tails emerging and dipping as if in slow motion, so close that we could see their great barnacled heads, their eyes and blowholes.

Most of us, I suppose, have had at one time or another the impulse to leave behind our daily routines and responsibilities and seek out, temporarily, a new life. It’s hard to escape the rat race these days. There are queues to reach summits, direct flights to remote Pacific islands and luxurious hotels in the rainforest. We’ve tamed and colonised most of the world, but one vast stretch of the planet remains beyond our grasp: Antarctica. This frozen continent at the end of the Earth has never been permanently occupied by man. With no towns or villages, no habitation bar the odd research station or expedition hut; just grand, icy, unpredictable wilderness.