An Expedition To Antarctica

"You can't miss Antarctica!" my friend exclaimed, while discussing my "Around the World" plans, just less than a year ago. "That way you will hit all of the seven continents." I considered the idea and instantly started planning it. The day came quicker than we expected. Excited with adrenaline rushing we got ready to board the ship. We talked about it, we dreamed about it and now we are finally doing it!

The journey to Antarctica was the most exciting. At first I felt a bit dizzy of sea sickness, especially while passing through the Drake Passage, one of the most dangerous waters in the world. But, slowly the sights and the feeling of sailing to the southern end of the world grew on me. Storms are quite usual here, mostly during winters. The waves can rise to about 25 meters, on our journey the waves were about 5 meter waves, quite normal, but even then everything was swaying. We took  2.5 days crossing the Drake Passage to Antarctica, 4 days exploring Antarctica and 3 days coming back to Ushuaia.

Antarctica was not always at the Southern tip of the earth. Scientists believe that it was once part of Gondwanaland, adjacent to what is now Asia, Africa and Australia. After it broke off it took around 180 million years to migrate to its current position. The climate was not always cold as scientist have discovered dinosaur remains and believe that in fact the climate was tropical. It’s a bit of a different story now days, as Antarctica is the coldest, windiest, driest continent on earth, during winter the temperatures can reach up to -°C (-112°F). That, my friends, is freaking cold, perfect condition to store your beers before the game, or kill off all the blood sucking bed bugs. You could not paint Antarctica without black and gray. Mountain peaks or sheer cliffs are the darkest hues of gray surrounded by massive areas of white. But the white is gray too! Variations of gray tones are infinite and like a watercolorist's fine strokes change across the paper, so do the colors across the land.

We had some minor accidents on the journey due to the ship swaying, but all was well in the end. During the day we chilled on the outside decks observing flying things like the Wandering Albatross, the world's biggest albatross. It's also the bird with the biggest wingspan of any living bird. Measured from tip to tip, its wings can reach up to 3.5 meters across (11.5 feet)! They can glide for several hours without moving their wings. We finally reached our first stop, Aitcho Island. The following spots are the ones we went to in Antarctica.
A bit of advice to my friends who are planning to go to Antarctica, get to Ushuaia at the beginning or end of the summer season and you will find last-minute deals to Antarctica for much cheaper.

After a lot of swaying, we arrived at the Aitcho Islands. The weather was perfect and we made our first landing on this island occupied by colonies of Gentoo penguins. The afternoon’s dimmed sunlight gave an amazing view of the Gentoo penguins and their habitats. We saw hundreds of penguin colonies living life, looking for love, mating and creating nests. They did not care or even notice that 65 or so humans just landed on their territory. Since they don't have any land predators, they are not afraid. 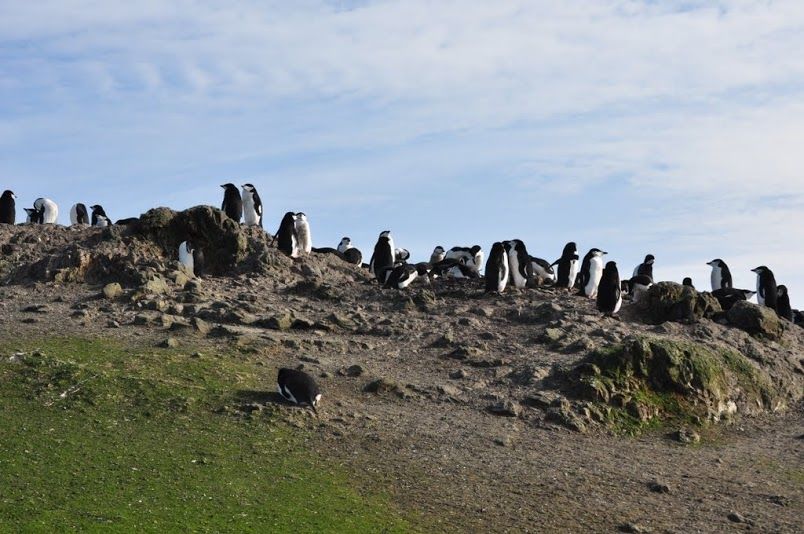 First, we visited the Foyn Harbour, It was a perfect day for our first zodiac cruise. After a night of rest our first morning in Antarctica was magical. Crisp reflection of the Antarctic waters with mountains and icebergs on the horizon. Early morning’s light made it perfect for surreal shots, probably some of my favorites. We hopped on to the zodiacs and cruised around a world of icebergs covered with snow and icicles. The sun´s rays helped the crystal deep navy water to shine and allowed us to see the massive iceberg´s root. We also passed by a wreck, which was once used as a ship and factory for whales. In the early 1900´s Antarctica was very popular for whales, Elephant and Arctic Fur seals. On the second expedition of the day we landed on Brown Station, a burned down Argentinian station, which is partially renovated and occupied by the Gentoo penguins. Just a few hours later the weather was totally different, rain, snow and cold wind. I couldn’t feel my toes, Iza looked like her face was partially frozen, but it was an amazing sight to see the penguins again, occupying human houses. Later, over dinner, we got to know our fellow travelers better. 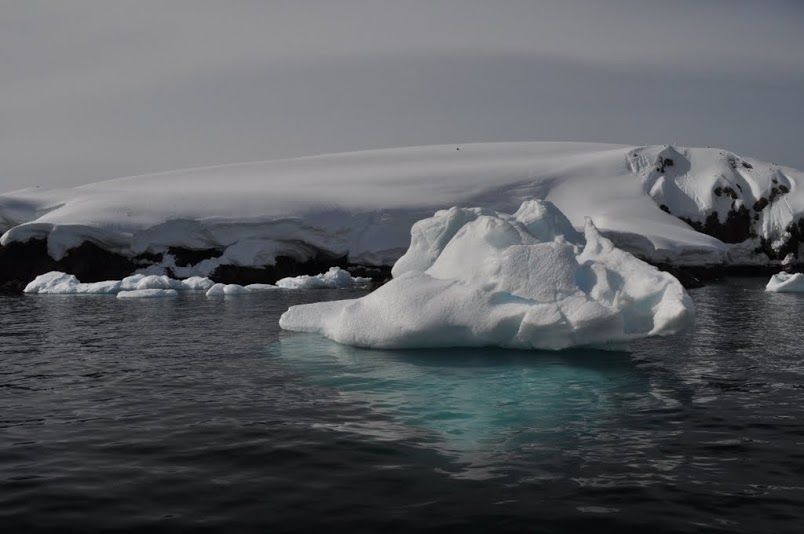 The next day we headed to Vernadsky station, a Ukrainian station that researches mainly the ozone layer. The weather conditions were terrible. Snowing, raining, windy, dark, and cold, just like I imagined Antarctica to be, but perfect time to visit the Ukrainian station. They gave us a tour of the station and then brought us to their bar. We all had a shot of the Ukrainian vodka, talked a bit, and returned to the ship. Ahhh, Vodka, it was good to drink you again. It’s been a while as we mainly drink what is local on our travels, rum, rum and more rum. "This is the Southernmost point on earth where I have had a drink." said Iza, with a boozed smile. 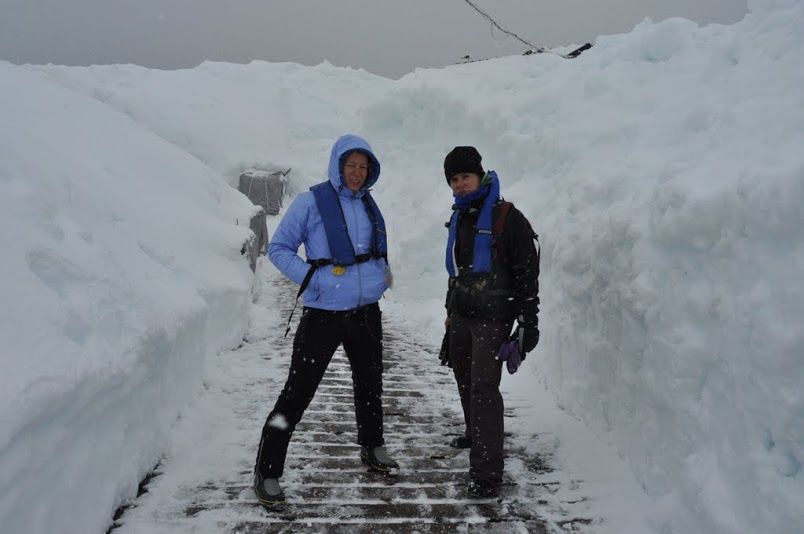 Next, we hit up Peterman Island, where we saw different types of penguins like Chinstrap and Adelie. Chinstrap is the second most abundant penguin species in the world. Its total breeding population is estimated to be 7.5 million pairs, the majority of which are in the South Sandwich Islands. We trekked a bit on the white fluffy snow with the gray clouds covering mountains giving off snow, rain and then brightness came out. No sun just lots of UV rays which were harsh on the eyes. It was a remarkable sight of the true Antarctic world and beauty, supernatural and yet so unreal, a different planet. 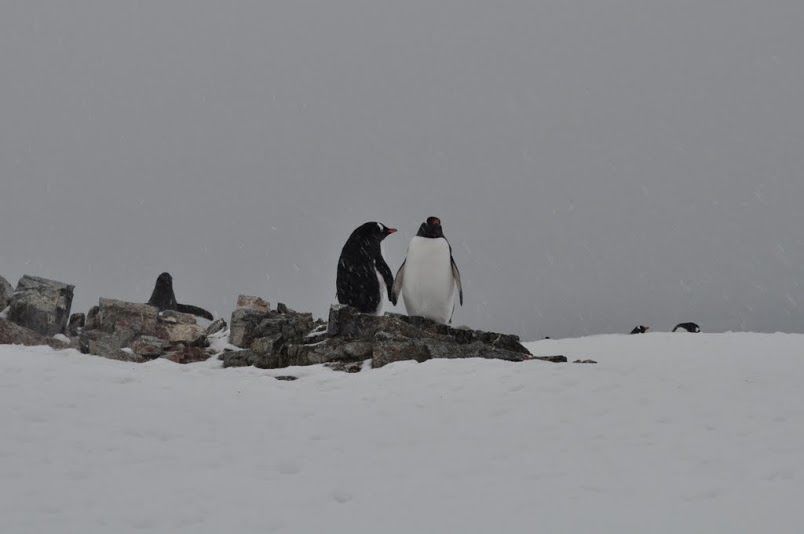 It was an overcast over one of my favorite bays- Andvord Bay. Overcast not in a gloomy way, but in an enchanting gray way. I do not know how to describe the softness of this landscape. We sit in silence, engines off contemplating this supernatural world, when out of all the tones of gray a glistening black spear 5 or 6 feet tall breaks the surface. Bull Orca again. Then we see other dorsal fins scattered among the ice floes. WOW – in one trip, two unique Orca sightings. 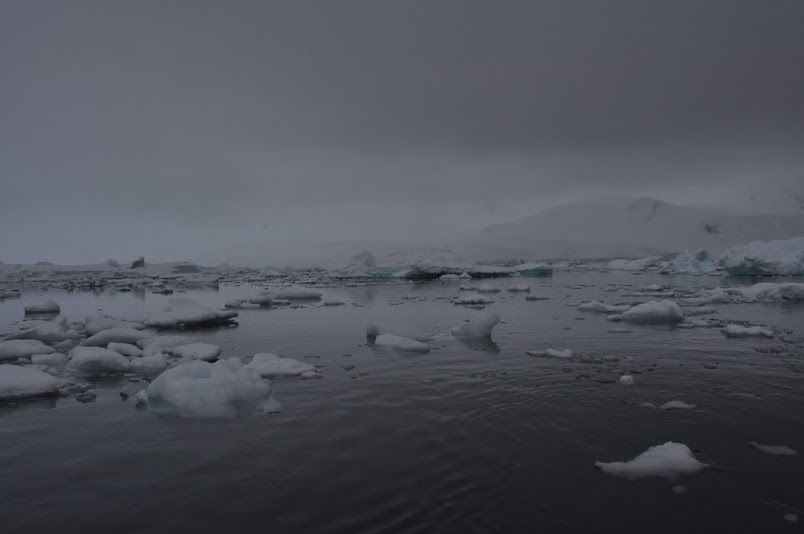 Whalers Bay (Deception Island), in 1906, a Norwegian-Chilean whaling company started using Whalers Bay as a base for a factory ship, the Gobernador Bories. Other whaling operations followed suit, and by 1914 there were 13 factory ships based there. Now only the remains are left standing, and it is used as a tour for the tourists, but I will remember this place for the active volcano, where the shore´s sand is nice and warm. This is also where most expeditions come so the crew can have a laugh and observe the crazy tourists. Swimming in the crazy, cool waters of Antarctica was easily the highlight of the day! 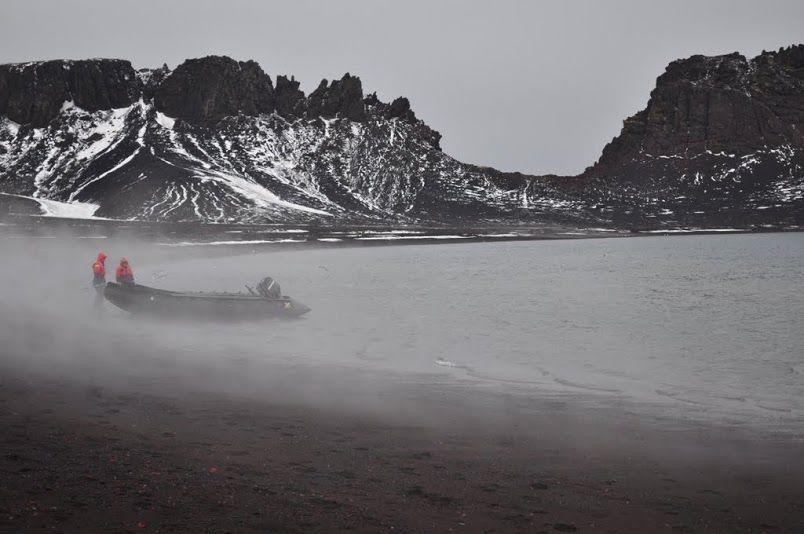 Ending the journey where we started it from, Ushuaia was the last stop. On our way back through the drake passage we encountered another massive storm. The storm was way above average, and I know it, everything was flying and breaking. All the bar-glasses were broken, chairs were upside down and people were walking at a 40 degree angle. When the captain announced on the speaker that we entered calmer waters, and we will be protected from the waves by land, I was so relieved. Overall, this trip was magical and I believe everyone should visit Antarctica after this! 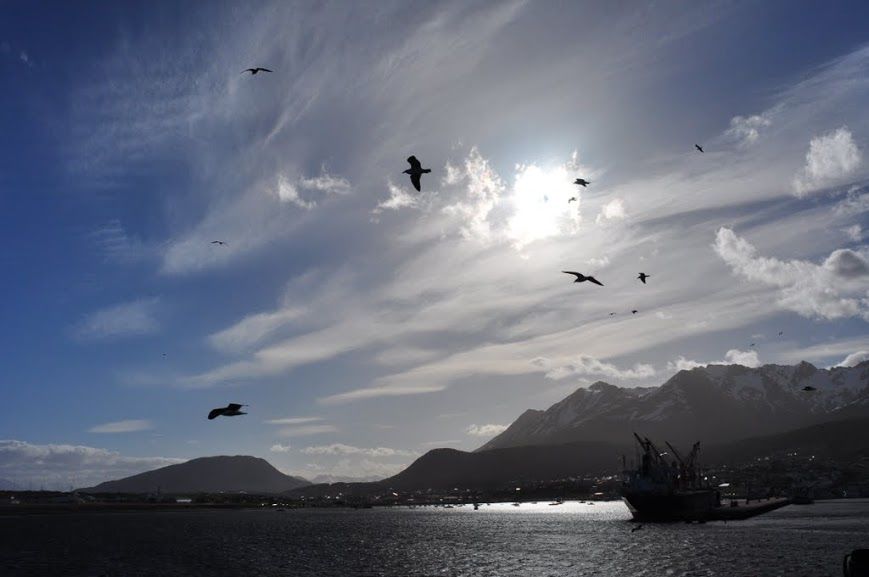