When delicious history met enduring mystery, I got happily 'stoned' at Stonehenge & Ring of Brodgar 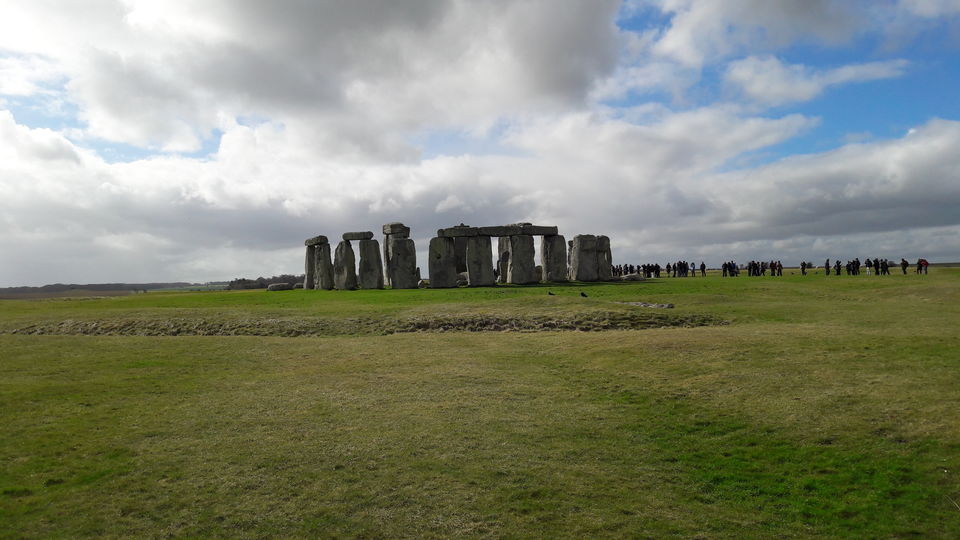 They make me think of giants standing around in circles. And make me wonder what those giants could have been doing standing around in circles. Those stones are stones alright, only unlike your average slab of solidified strata. The stones that make up the circle in Stonehenge seem imbued with meaning and mystery. Those at the Ring of Brodgar are very special too and more on them later.

I will always remember the first time I saw Stonehenge (sounds a bit corny, no?). It was from the tour bus as it approached this pre-historic site located off the A303 motorway in Wiltshire. In a scene straight out of a widescreen historical, there was the giant stone circle rising out of a huge expanse of green, and approaching it, like lambs following their shepherd, was a long, slightly-wavy line of visitors, all dressed in dark blue, black, red, yellow and orange-coloured outdoor clothing. There was something timeless about that vision that made it stick in my mind. About 5 months down the line, it refuses to go away.

Stonehenge is world famous, and rightly so, for it is a perpetual mystery and despite attempts to get to the bottom of this mystery, only those who have the right intention are meant to solve it.

So, what is Stonehenge really? Nobody knows for sure, since it is a Neolithic or New Stone Age site and that means it's like really really old. Older than Jesus and Moses and Abraham and other good 'ol gents and their missuses. But one thing everyone agrees on and it is that Stonehenge is significant in some way. May be it is the alignment of stars above this particular location in England, may be it is the Ley Lines that energise the spot exponentially, may be it was a ceremonial site, where pagans, druids and mystics would gather to honour nature and the elements.

Not everyone thinks it was all peaches and cream spirituality, though. Some religionists proclaim that the 'dark arts' were practised here, and that could have involved anything from honouring the dead to sacrificing human babies and animal adults. As with all things 'religion-y', a slight deviation from established practises (which were established AFTER STONEHENGE) and you get labelled a 'witch' or a 'black magician' and Stonehenge has been branded as the watering hole of just these kinds of 'witches' and their 'black magician' BFFs.

For me, the visit to Stonehenge was the highlight of my stay in the UK, and I loved every moment of it. Well, almost. It was very windy out there near the stone circle, and even though you cannot go inside the circle except on yearly solstices and equinoxes, you can feel the pure energy of the landscape. It is mystifying and overwhelming, by turns. My hair got all muddy from standing in the fierce wind and then a group of Asian men in their 20s came along, taking pictures of tourists without their permission and generally being loud and brutish and making you feel embarrassed for being from the same continent. When it began raining, I was almost glad to find my way back to the shuttle bus that takes visitors to and from the Visitor Centre, near where all the coaches are parked.

As I left Stonehenge, I made a promise to myself to return on a more peaceful day. I'm still to come good on that promise but take solace in the fact that if not Stonehenge again, then I found time to visit its northern counterpart the Ring of Brodgar in the Orkney Islands.

Nothing seems to have changed here, since 10,000 BCE 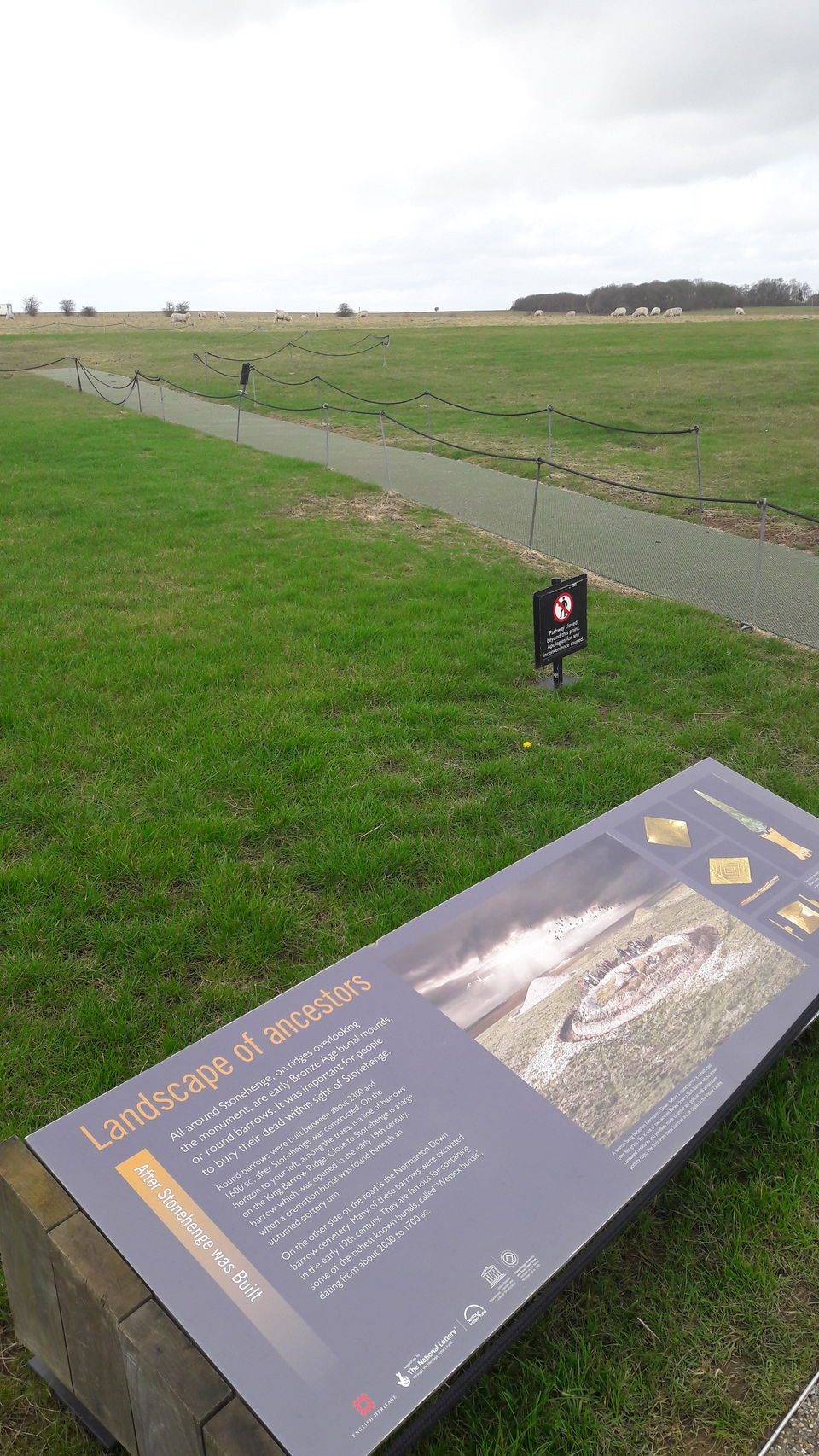 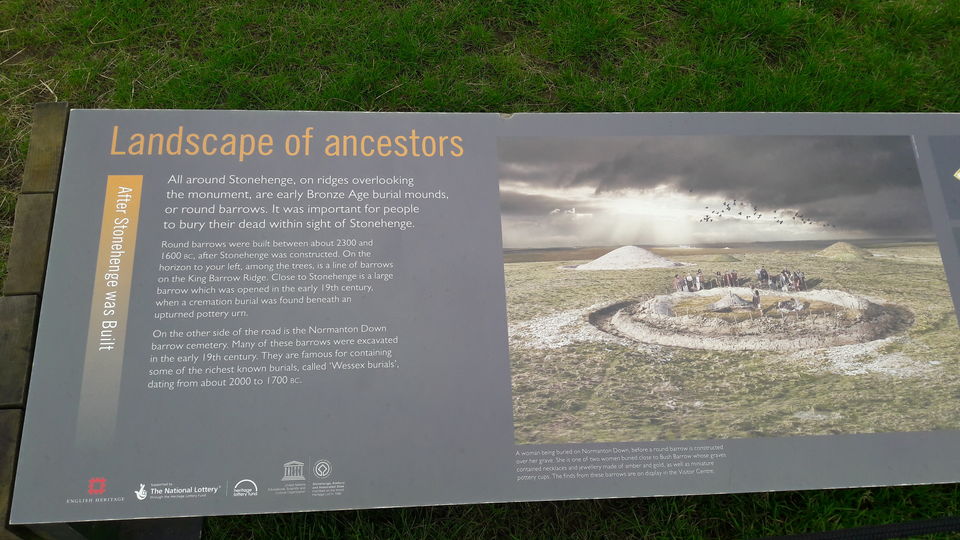 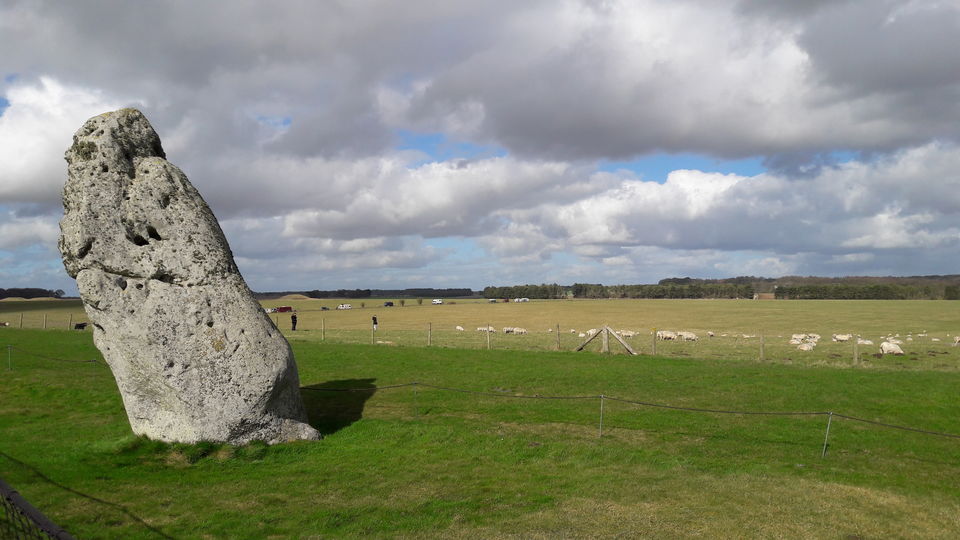 .... and the crowds keep growing 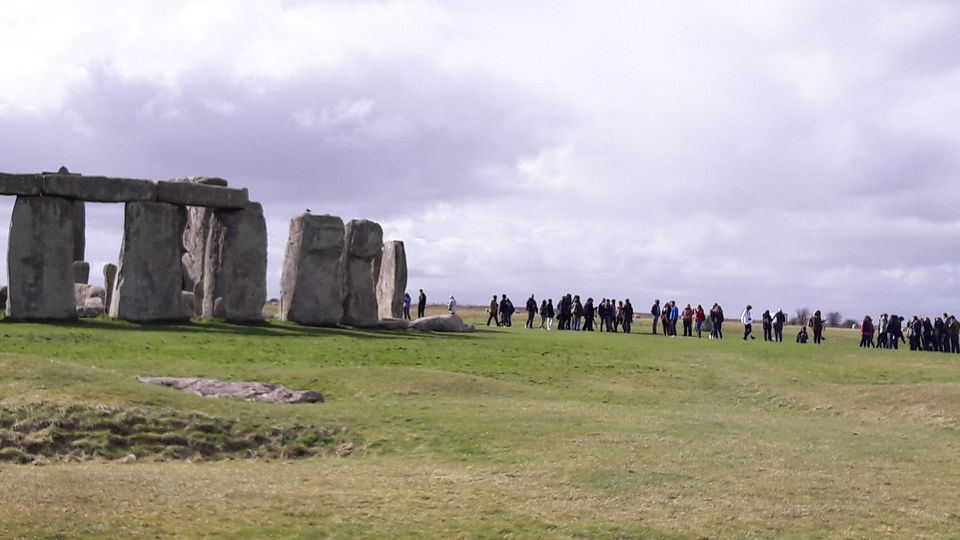 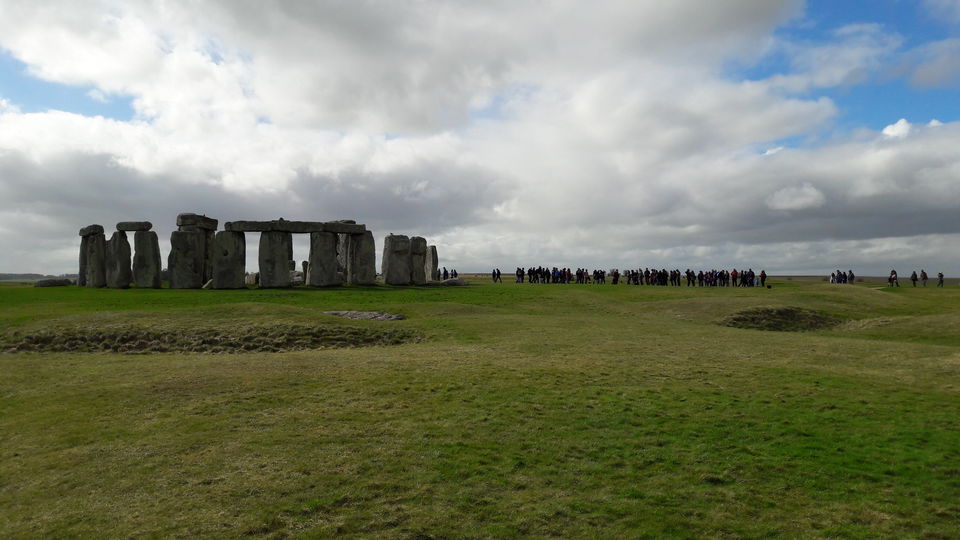 A conference of giants 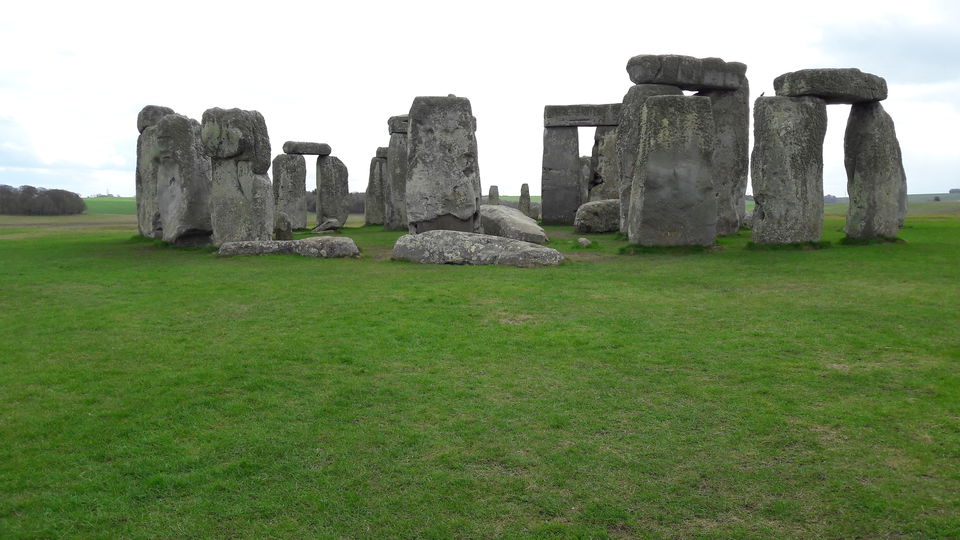 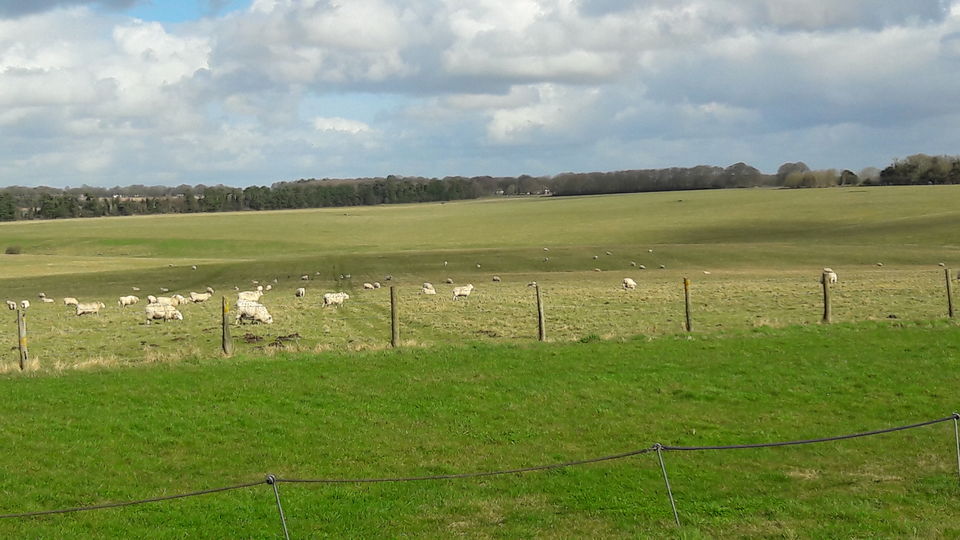 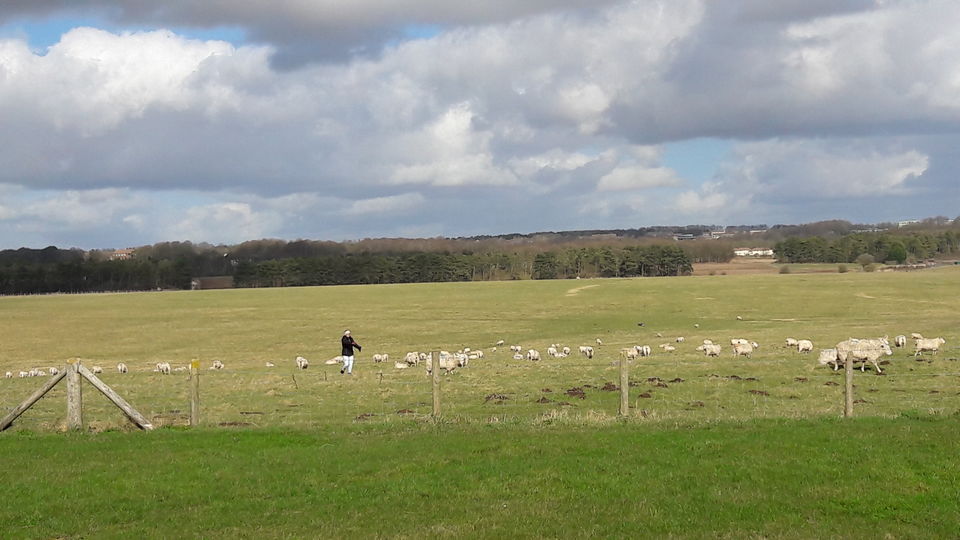 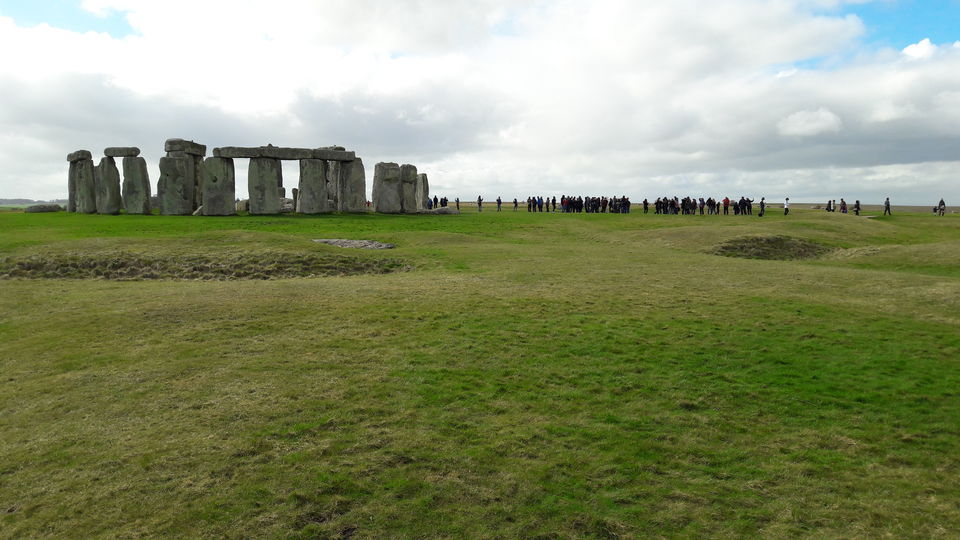 A circle of ravens and starlings, near the world-famous circle of stones 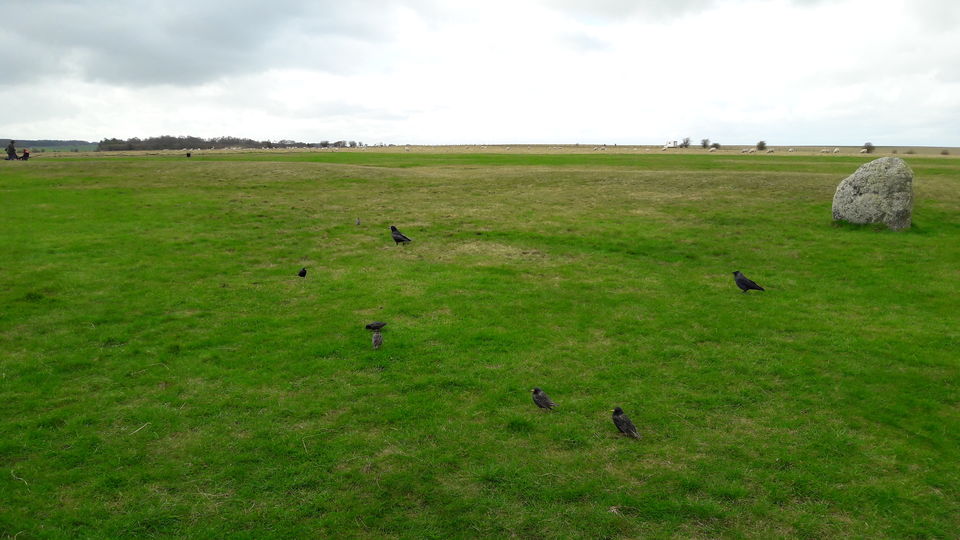 The A303 motorway, top right, as seen from Stonehenge 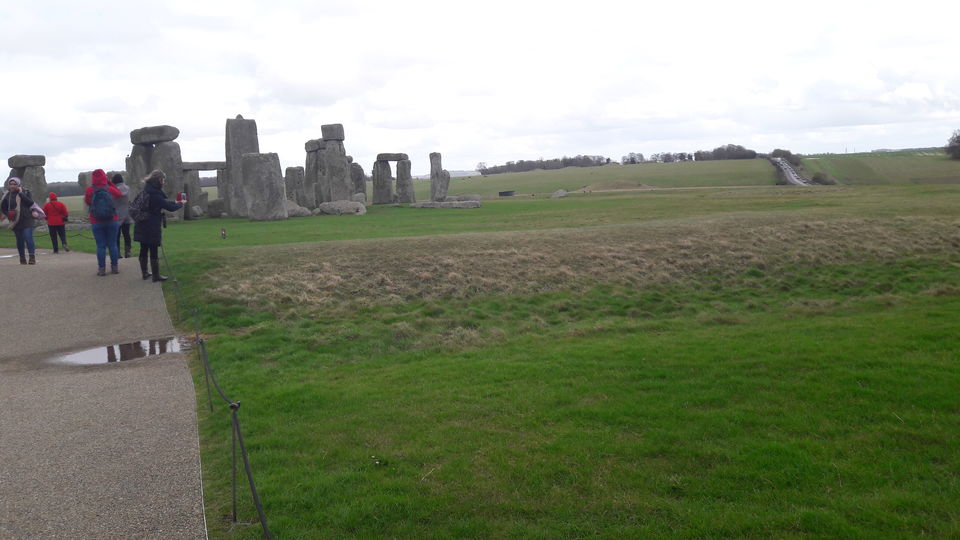 The eponymous Brodgar was most probably an adventurous type from a land to the far north of present-day Britain, possibly from Scandinavia, who landed on the group of islands that we now call the Orkney Islands, one day, many thousands of years ago. Why did he leave his village and his folks? May be because he was bored and they were mean to him? Who knows! So, Mr Brodgar made the Orkneys his new home and in his old age, decided to honour the gods of nature and those in the skies that had made his long sea voyage possible, letting him complete it in one piece, no broken bones, thank God(s)! Let's say Mr Brodgar then managed to convince his 5 sons and 6 daughters, along with 55 grandchildren, to come together and build a massive stone circle and because it was in the shape of a circle or a ring, they decided to call it the Ring of Brodgar.

What was it 'used' for? As this is another Neolithic site, like Stonehenge, nobody can answer that definitively. What everyone seems to agree upon is this too was a place for the earliest humans to honour Earth, nature and the elements, including constellations like Orion and the Great Bear.

On the day I was there, the sun was out and the breeze was gentle. At first, all you can see from the coach parking area is about 5-6 tall stones set apart in a curve. As you get closer, these 5-6 stones become ever-larger in size and then you realize there are 27 of them. Taller, larger, evenly-placed in a concentric circle, these stones seem to have stood witness to a lot of history. History of the humans that lived here, of the way those people shaped the landscape around the Ring, and of the pagan rituals that they might have performed inside this very stone circle.

Even today, on solstices and equinoxes, people travel from all over the world to this special spot nestled on a piece of land in the middle of the sea to the far north of Scotland, and mark the occasion through rituals and ceremonies, including weddings and betrothals.

How can a cluster of stones, both at Stonehenge and at the Ring of Brodgar be so significant and religious-ly significant at that, to the story of humans on Earth? Isn't that what you are thinking right now? These are just two circles that I have mentioned in this article. Spread across the UK are atleast 1300 other henges and stone circles, including that at Avebury and Silbury. There are an estimated 10,000 round barrows or burial mounds dotted over Britain and each of these played a huge role in the spiritual lives of the earliest settlers.

Aren't religious rituals supposed to be performed inside temples, mosques and churches, protected from the elements? What claim do these impressive pre-historic sites which can't-hold-a-candle-to-established-religious-monuments have to spiritual legacy? Here's the thing. World religions as we currently know them rely on human allegiance, which is not always voluntary. Most clergymen are morally-bankrupt, controlling egotists and face all kinds of abuse enquiries. If religions are about world peace and tolerance, they seem to have failed miserably. If things don't change soon, we might have an epidemic of atheism. Yet, today, I am writing on and you are reading about Stonehenge and the Ring of Brodgar.

Exposed to the elements, taking in rain, hail, sleet, snow and sun, in endless cycles of time, as the days turn into nights and the nights become stars. There must be something about standing inside sanctified circles surrounded by nature and the seasons, which defies 'logic' and 'reason'. May be it is something we'll never figure out. May be, subconsciously, we already know what it is and therefore don't need to struggle to figure anything out but just believe. Believe in stone circles and henges and burial mounds. And in a simpler, kinder, purer, more natural way to keep spirituality alive.

Cloud yachts above the Ring of Brodgar 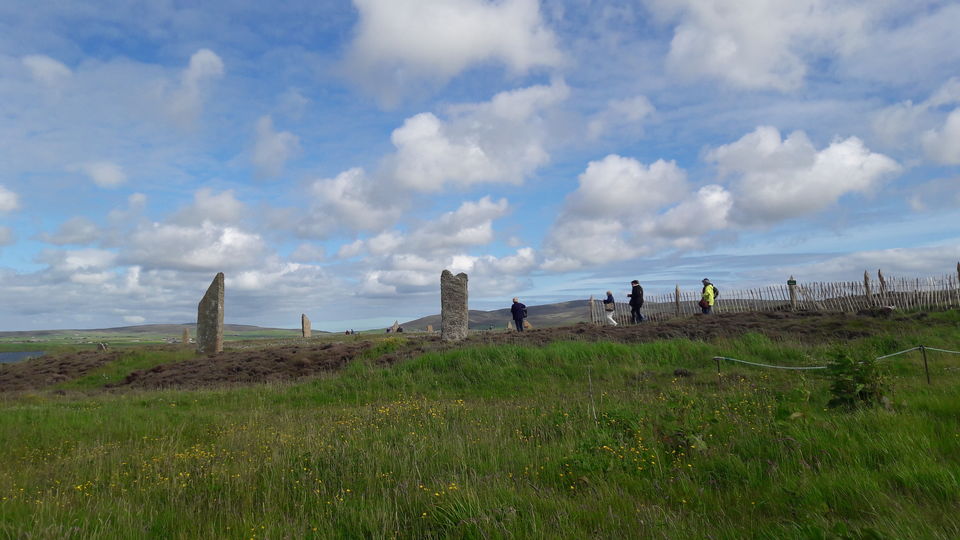 Plenty of heather and lots of good weather 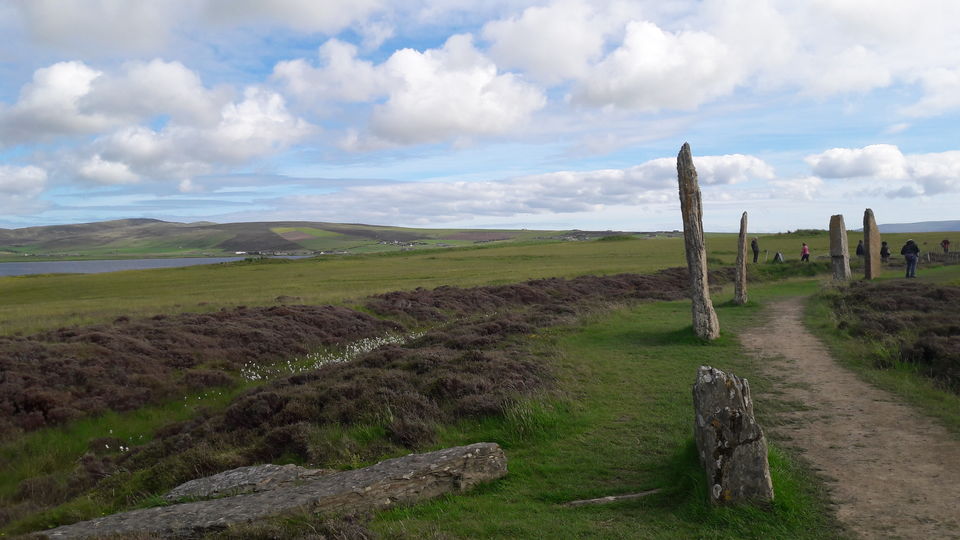 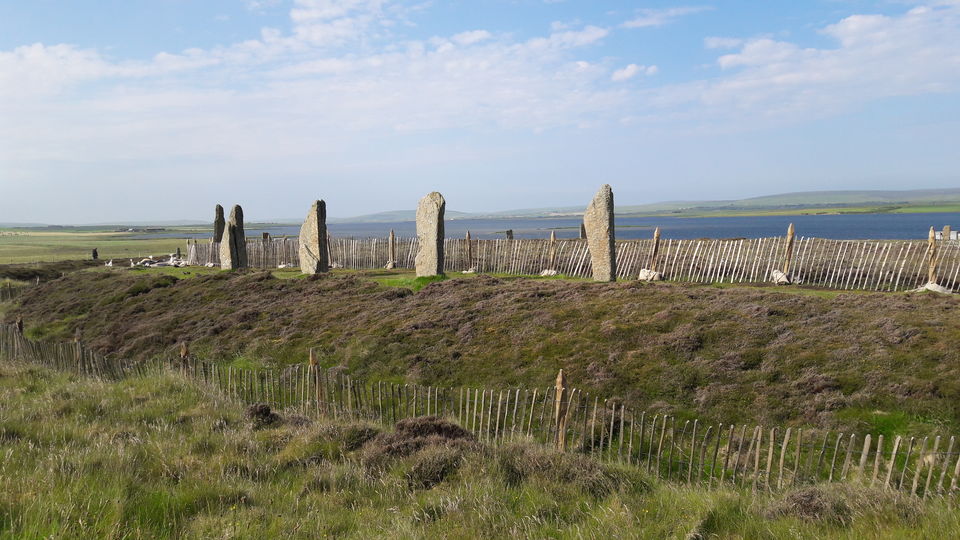 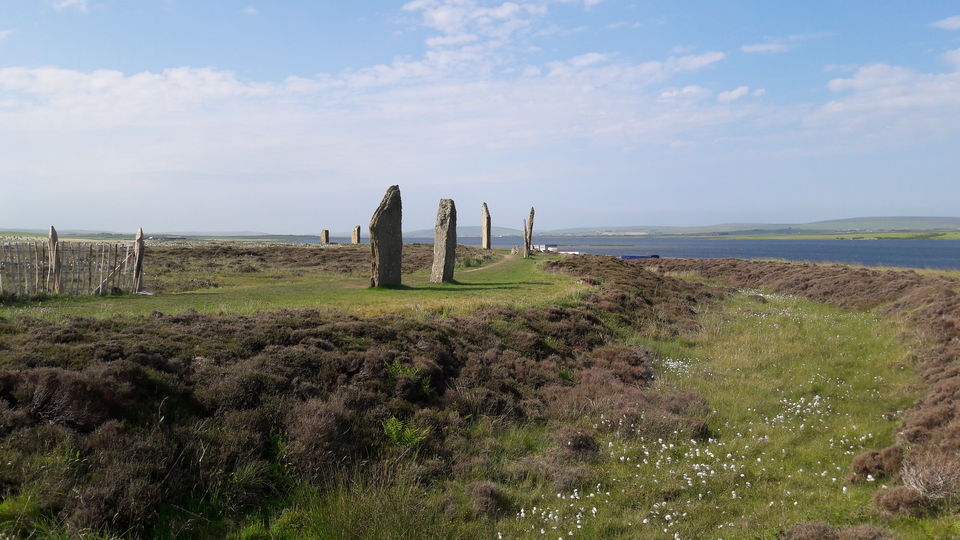 The many moods of the Ring of Brodgar 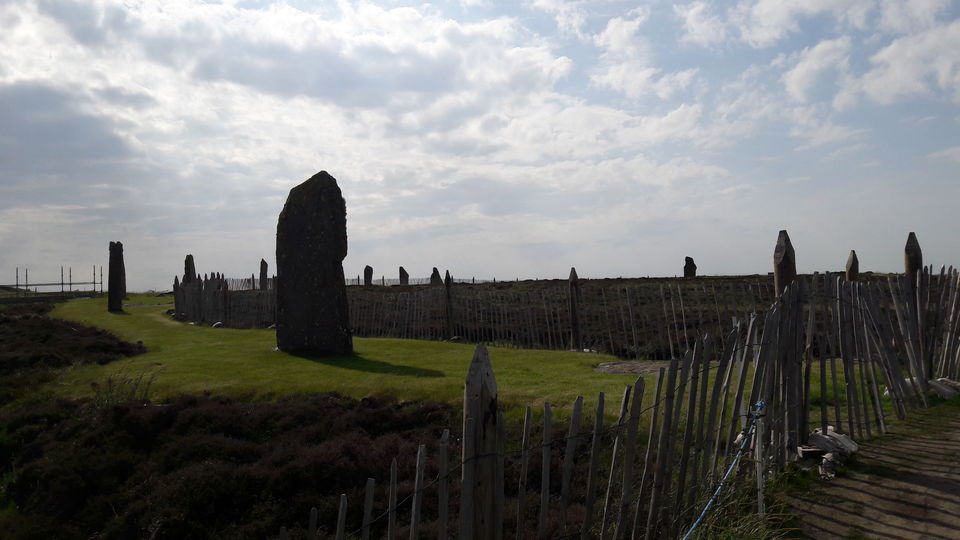 Whoa! Beat that, you pagan-bashers you! 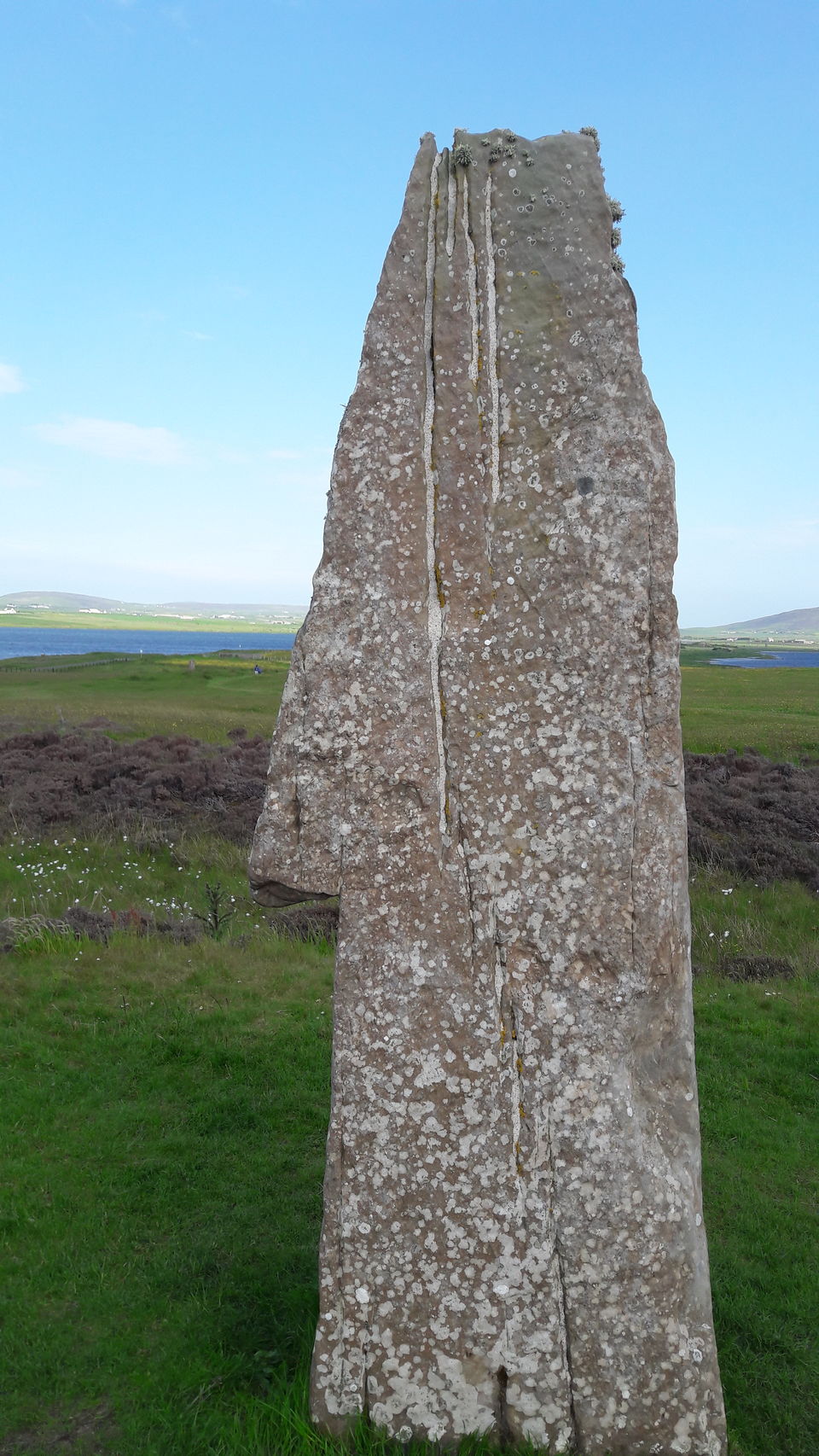 There's sun and there's water and ancient stones too 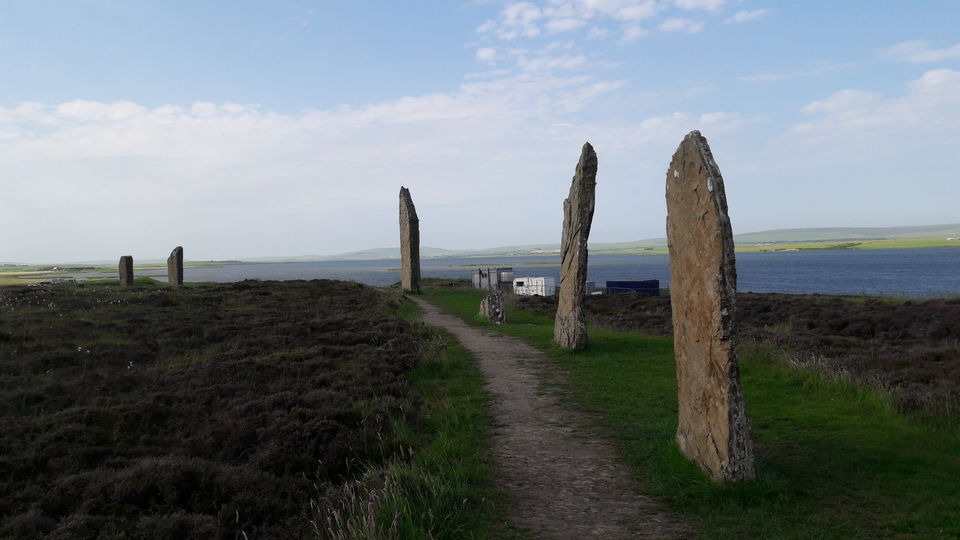