A non-believer's trip to Temples!

Mid-September 2018; just came back from a two week long gruelling business trip to China and travel was not my next agenda. Well was that? not sure! My loved one knows I have a "thing" on road trips and she planned for this long-desired trip as my advance birthday gift!

I consider myself as Hindu Nastik (Someone who does not believe in god or religion but proud of Hindu way of life that this country has practised for five thousand years. Not to be confused as Hindutva as religion) and usually keep myself away from religious places unless there is something else to be enjoyed. I have visited number of temples, mosques or churches but for their history and architecture. Madurai-Rameshwaram-Kanyakumari was a long pending trip in my to do list. But due to shortage of time we had to drop Kanyakumari from itinerary. My points of attraction were Meenakshi Temple of Madurai for its marvellous architecture and drive to Dhanuskodi from Rameshwaram. Plus this was first long drive for my new Nexon, so I was definitely excited to test performance of my bahan !

When we started our journey, it was still dark at 5.00 A.M. My idea was clear; to drive away from Bangalore city limits as early as possible. I took varthur<>Sarjapur<>Attibele and within hour hit NH44 aka Hosur Road. Like always high numbers of trucks were not letting me to drive smoothly till next few kilometres. Then traffic reduced and I was able to do 100+ We were sailing smooth and decided to stop at Cross Town Eatery , Salem for breakfast. This is a nice place, for pitstop on highway. One does not need to enter Salem, it is right on NH44.

After filling our tummies, we started onward journey. By that time traffic started showing up but once we took right turn just before MGR Nagar again road become free. 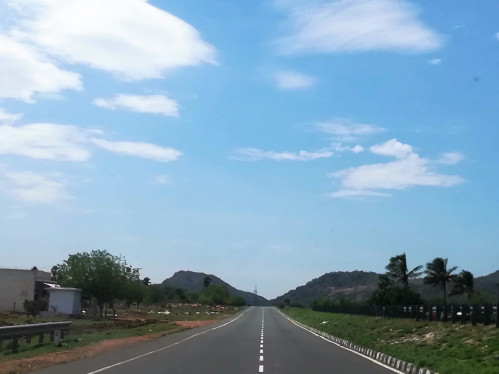 Our journey continued till we reach Madurai. Once we entered the city road condition became bad. Anyway, Madurai is one of the oldest cities in South India. And just like any old cities; narrow overcrowded roads and huge traffic is expected.

Royal Court is a mid-premium hotel inside Madurai City and very closed to Meenakshi Temple. I booked it online after checking reviews. Please note many of the hotels in Madurai (true for most of old Indian religious places) do not have parking space. I made sure to be one of the search criterion. This hotel had basement parking (not very convenient though).

While checking-in, we got some nice suggestions from reception on itinerary. But we decided to have lunch and some rest before going out. Temperature was soaring outside and we all needed some breather after long hours of drive since early morning.

I was feeling lazy that afternoon and decided not to take out my car anymore, did not have enough patience to drive through those overcrowded narrow streets. So, hired an auto-rickshaw to drop us to North Gate of Meenakshi temple.

One must enter the temple bare feet, leaving all cameras and mobile phones behind. Photography inside temple is strictly prohibited. There are deposit counters where one can keep all valuable items and shoes. We did that and stood in the entrance queue. This is one of the very famous temples in India which attracts millions of pilgrims and tourists every year. Temple is also a highly sensitive zone and security is very tight. For all such reasons there were huge queue in entrance. Photography is prohibited so I could not take any pics to share. 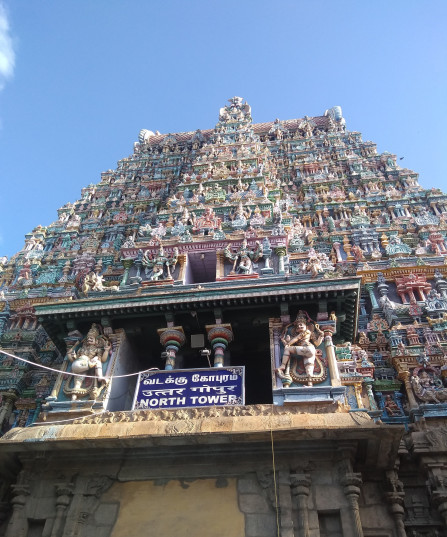 The temple is very big and a marvel of architecture. Most part of the present temple was built in 17 th century during rule of Thirumalai Nayak, but it has a very old history. There are mentions of this temple in old Tamil literature which goes back as early as 6 th century. Just like any other wealthy and famous temple; this one was also looted and damaged by Sultanate invaders and then partially restored by Vijayanagar Dynasty during 14 th century.

Meenakshi ( Meen = Fish, Akshi =Eye) is another name of Goddess Parvathy , who is wife of Lord Shiva as per Hindu mythology. This temple has two main sanctums one dedicated to Meenakshi Devi and another to Sundareshwar or Shiva. Other than that, there are hundreds of statues of different gods and goddesses and other mythological characters and events. 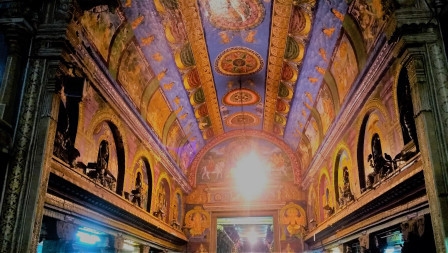 All of these statues, gopurams (tower gates), murals and wall paintings are example of highest quality of craftsmanship and artistry. Keeping religion and faith aside this place is absolute must visit for someone interested in old Indian archaeology and civil engineering!

The place was very much crowded and to enter the sanctums one had to wait in queue for long time. There is a system where one can bypass this process and have a direct darshan (view) by paying some "hefty" "donations". Kuber (god of money and wealth) does his trick always ????. For obvious reasons I did not take his help here!

Day-2 (Paying homage to The Missile Man of India)

Madurai to Rameshwaram is roughly 180 KMs by road and can be reached in a little more than 3 hours. There was not much plans for the day, so we started our day with ease.

After we exited Madurai city, roads were nice barring few stretches. Stopped once for tea and continued till we reached famous Pamban bridge that connects Mainland with Pamban Island. Built in 1914, it is India's first (and was longest for decades) sea bridge and is an engineering wonder. It opens to allow ship movement, but I was not lucky enough to witness that.

We stopped our vehicle and enjoyed the view. It was quite a scene I must say. Took some pictures and proceeded towards house of Late Dr APJ Abdul Kalam.

Late Dr. Kalam is one of the greatest son of India; country has ever produced. Despite of being from a very humble fisherman's family he rose up to the limits of academics, one can only imagine. He was a world-famous Aerospace Scientist and spearheaded India's critical space, satellite and missile programmes. Dr Kalam had many opportunities to join space research agencies of first world countries, but he chose to serve his motherland. His love for the nation was so eminent, there was not a single opposition when his name was proposed for post of President of India. Even after becoming President he continued his great works and inspired many by his books, most famous one is "Wings of Fire". 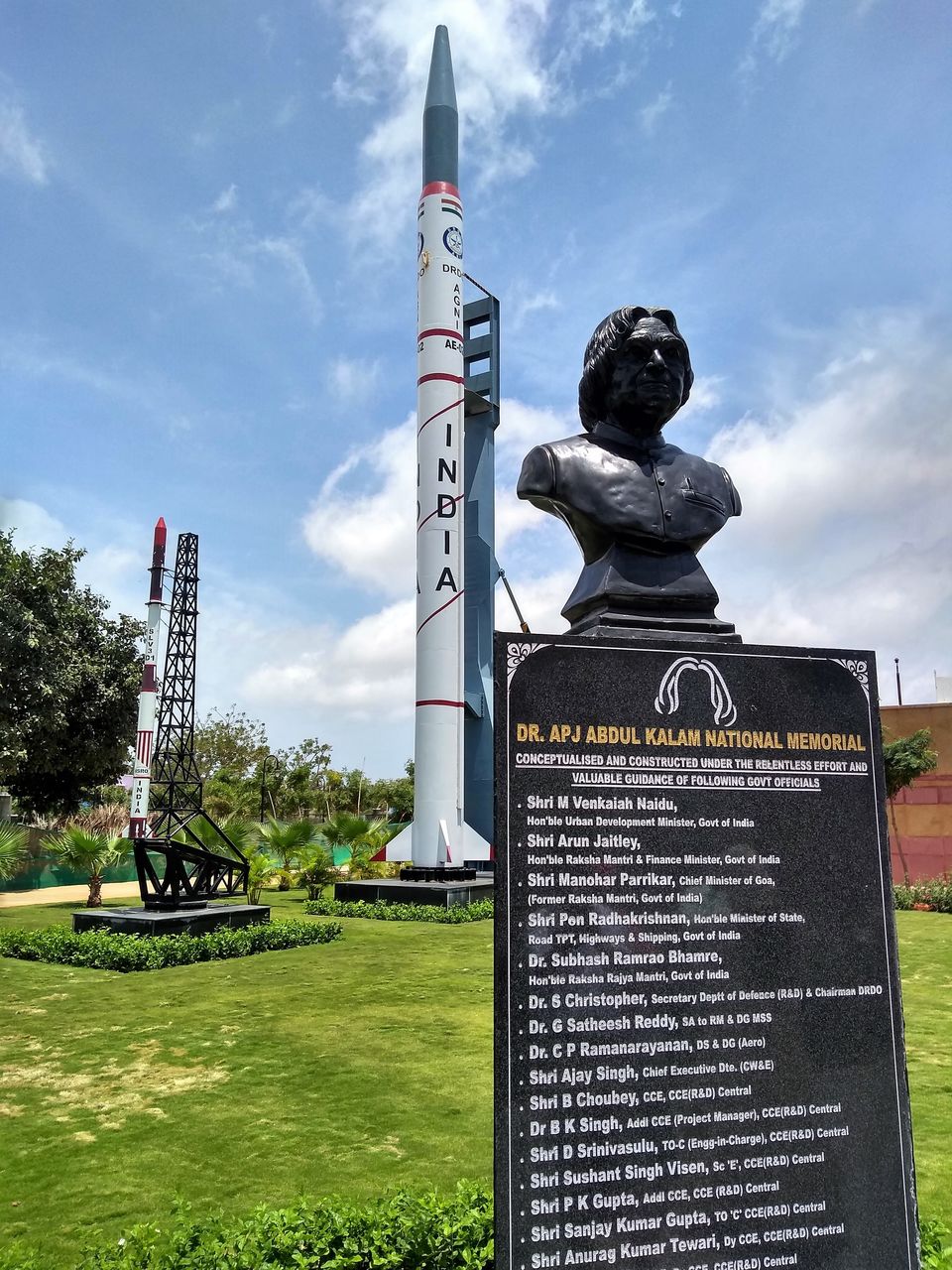 In 2017 this house and resting place of Dr.Kalam has converted to a memorial museum. This is a must visit place in Rameswaram. Apart from his shrine, it has wax statues and displays of Dr Kalams work and life. I felt lucky to visit this museum and literally had goosebumps! Here also no photography is allowed inside the museum so took some pictures from outside and proceeded towards hotel.

Rameswaram has lots of hotels and accommodations like any other famous tourist destinations. But one needs to check availability of parking as not all such places have it. I booked rooms at Govt. run TTDC resort which is jut next to bay and walkable from Agni Tirtham.

The location is good and resort itself is quite big, but rooms are not well maintained. And restaurant has no options other than meals during lunch. Anyway, I stayed in TTDC resorts in other places and kept my expectations low, so this was neither shock nor surprise.

Just next to our resort there was a jetty from there we took 45 minutes ferry of ride in the afternoon. It was nice experience and highly recommended during ones visit to Rameswaram. 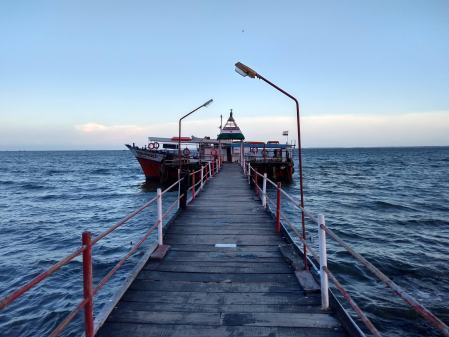 Later we went to Agni Tirtham and Ramanathaswamy Temple. Both the places were very much crowded.

Next day we had to wake up at 4.30 to start our drive to Dhanuskodi to watch sunrise. So, we had early dinner and called it a day.

As planned we started our drive during early hours and it was still pitch dark that time. Soon we came out of the city and hit Rameswaram-Dhanuskodi road. The road used to go till old Dhanuskodi till recent past. But now a land filled road is extended till the beginning of Ram Sethu or Adam's Bridge. As per mythological belief it is remain of the bridge built by army of Lord Rama to launch attack on Lanka. Geologists say this is a geological phenomenon where bed of limestone deposits, corals or volcanic eruptions create links between two disconnected land masses. This new road cuts across the ocean and I had this drive on my to-do list ever since I came to know about its existence.

The drive indeed was very special. As it was dark we could not see water on either side but could feel strong breeze. Sunrise was yet to happen, but slowly other end of the horizon started showing glimpse of light. The feeling and view were surreal. It was like going towards moment of enlightenment from darkness! It was spiritual feeling of some kind.

We reached at the tip of the road and parked our vehicle. By this time, we were joined by several other tourists as we started walking on the sand. We walked all the way till the end of the land where Bay of Bengal meets Indian Ocean. India Ocean seems to have more vigour with high waves while Bay of Bengal is calm and composed. Sunrise was spectacular from here. Sometimes you feel extremely lucky to be present in some place at some special time. This was one such special moment for us indeed. 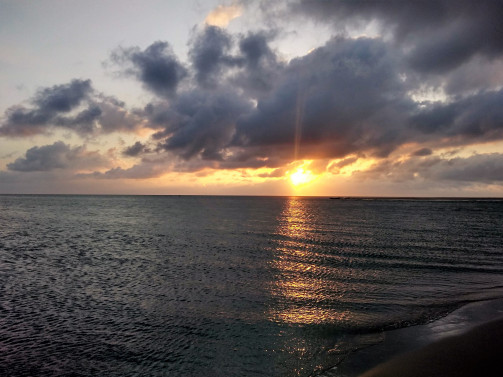 This tip is so near to Sri Lanka, that we started getting Lankan Cell phone networks! After spending some real good time, we came back to main road and returned to Dhanuskodi. This time we could see waves coming from both sides and fabulous road running insanely straight!

Dhanuskodi was small but bustling town in the Gulf of Mannar. It was a fishing village and transit point for Sri Lanka. I was reading somewhere in internet even after independence one could travel from Chennai to Colombo in single train ticket. Train would bring the passengers directly to Dhanuskodi and from here ferry would take them to Sri lankan coast where connecting train to Colombo would be available.

But everything changed during the cursed night of 1964, when a massive cyclone washed off entire Dhanuskodi along with its populations. Since then this place was never inhabited and still known as ghost town of India.

We walked across the Dhanuskodi's remains of old buildings, railway station, water tank etc. I entered one broken house and felt this must be a bedroom where a family would have been sleeping unknowing about their fate; it gave some real uncanny feeling!

We rushed back to our resort to take shower and do final packing. After not-so impressive free breakfast we hit the road for home. Target was to cover nearly 615 km. We covered this distance in 11 hours with a lunch break and couple of short breaks despite of heavy traffic after Krishnagiri.

Our 1300 KM long road trip came to an end but left some wonderful memories forever !