A Road Trip Where Strangers Helped Each Other Build A Road In Spiti Valley!

A road trip where strangers helped each other build a road in Spiti Valley!

Spiti is as challenging as it is stunning, so, to love it you must love and embrace all of it. 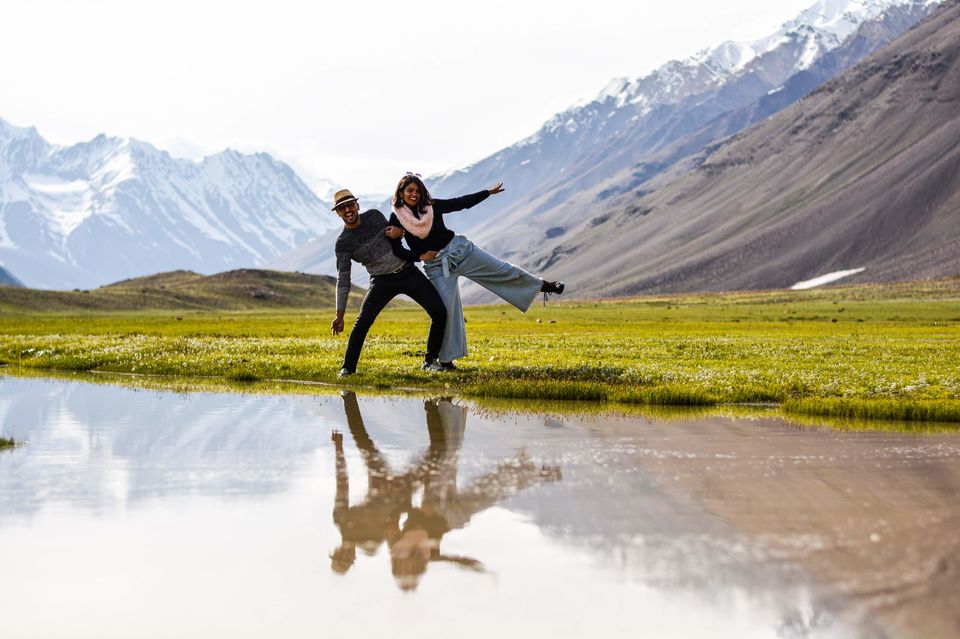 Ever since I was a kid I took a lot of road trips. My father inculcated a love for travelling and road trips in me since an early age. However, in my 25 years of existence I had never built an extension to a road, I had never seen 40 random people come together to construct a path where there wasn't one.

On the second last day of our trip to Spiti, we were returning from Chandrataal to Manali. Up since 5 am, we were making our way along the pebbled pathway with games of dumb charades, conversations and silences in which we gazed at the gorgeous valley we were saying goodbye to. Our minibus made its way ahead on a notoriously narrow path when our driver, Bhanu bhaiya, called out for everyone to get off. I saw that the path was just about the width of the vehicle, we'd have to move edge to edge. The road was brimming with water from a waterfall on the right hand side (inner side) and the water was then flowing into another waterfall (left hand side, open end). The trippers got down and I asked the ones from the second minibus behind us to also get down and go stand further ahead. I got back inside and sat on the seat next to Bhanu bhaiya. Bravely and selflessly he requested, madame its not safe, get down. I simply shook my head, this wasn't up for a discussion. For a little while bhaiya tried moving the vehicle, move ahead, reverse, cut and ahead again. At this point the left flank of the vehicle was right at the edge and we saw that the tyre on my side was in a direction where there was no path left, only the waterfall below. We would have to make our own way, quite literally!

The image can't fully capture the situation but maybe it can help paint an idea in your head. 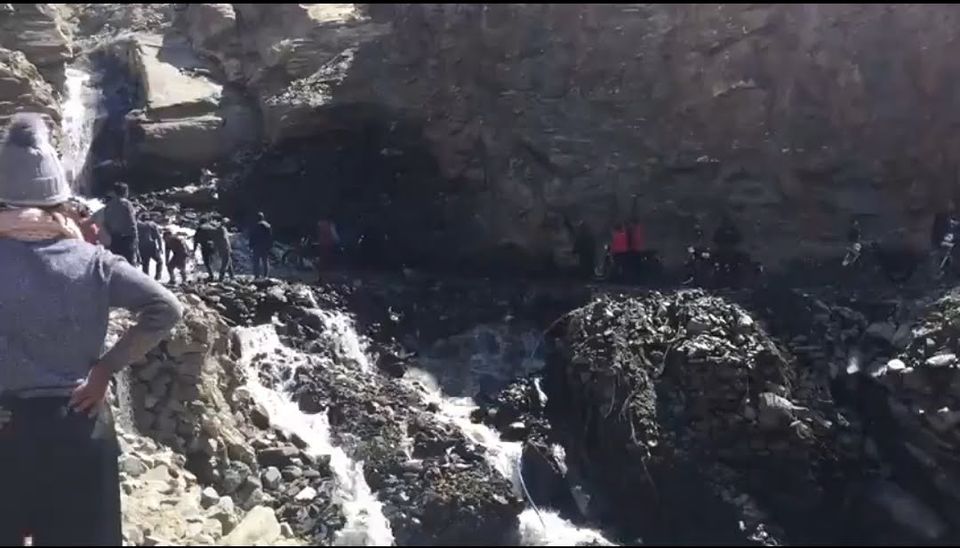 We got off and started looking for rocks to add to the upper level of the waterfall. In the blink of an eye, the biker gang from behind had joined our forces, my trippers were nowhere near the far off point indicated for them to wait but instead right in the middle of the action, local drivers had gotten below on a level of the waterfall waiting for us to pass rocks and together we all did so. This was at 10 am, with a temperature of about 6-7°, in the middle of continuously flowing freezing water but who cared? Everyone was hunting for rocks, some near, some far, some climbed up in search and some bent and scraped from below. Some even unleashed their inner Hercules and flipped huge rocks side to side! Without instruction we stood in queues and passed one stone after another. In the face of chaos there was an unspoken coordination.

We had been travelling for over a week. Spiti while stunning is also a strenuous trip involving long commutes. My trippers were fatigued, dealing with altitude sickness, nausea and what not. But they all came forward to help. Weak ones gingerly carrying rocks together, to others taking initiative at other spots. Help wasn't asked for but help came and it came naturally because no matter how bad we often believe the world is, the reality is that human beings are inherently helpful beings. It would have been easy for someone to stand on the side with their hands on their hips and merely watch the debacle. But it was an internal decision that made them all come forward. You can spend hours talking, you can spend nights dancing together but the way people come together in a tough situation is what defines them.

The bonds of a road trip are known best by the roads that saw us forge them. 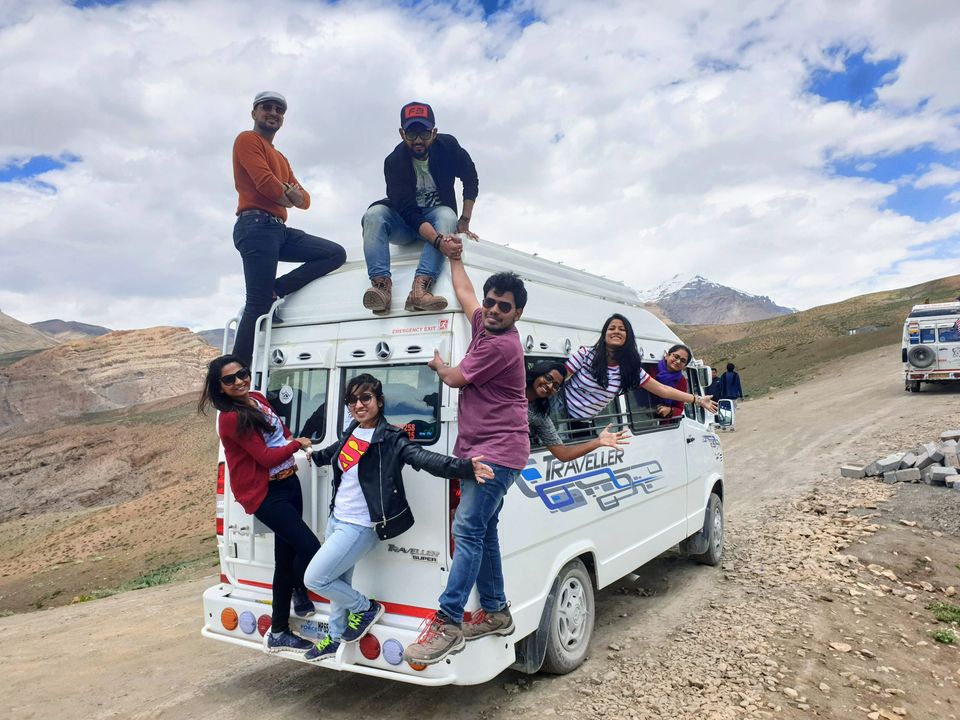 Later one of my favourite trippers asked me in his broken Hindi, "But Niyati, sitting there, with the vehicle on the edge, wasn't your heart going 'dhak dhak'?". Hah maybe it was, maybe it wasn't. But it wasn't the 19 trippers alone who were my responsibility, the 2 drivers and local guide were too. We'd faced a similar situation during the first trip I led with Neeraj to Tirthan, at the time he'd sat back with the driver. That day on our way back from Spiti I remembered the Tirthan incident later but now I understood Neeraj's decision so much more. You see I don't know much about vehicles that I could have guided Bhanu bhaiya in that regard, I am not the physically strongest to contribute in that manner but I do feel that something as basic as presence can have a calming effect. My responsibility to him went beyond asking him about his meals and well being. Bhanu bhaiya unlike our other driver had been referred to as chilled out by the group. In every situation he'd remained unfazed and did everything with ease, but that day I'd seen him press his lips together. The man had bravely asked for everyone to move to safety but still had to see the situation through and after 8 days together it didn't feel right to make him see it through by himself.

We were touched by the trippers coming forward to help forgetting their woes, by the unknown bikers going above and beyond to help too and after we built the extended path, Bhanu bhaiya and I got in the minibus and finally crossed the path together. He gave me his crooked teeth smile and we high-fived each other! He said, "bachh gaye!" to which I thanked him, "aapne bachha liya!" . The trippers rejoiced and the second minibus followed. This is to remember the expressions on everyone's faces, the camaraderie they shared in a tough situation and the spirit with which each and everyone came forward. You can gaze at the most stunning of sunrises, the most dreamy starlit nights and yet when the group of travelers was asked about their favourite memory from the trip, they all said in a solemn voice that it was the moment when a whole bunch of strangers came together. You see it wasn't their problem or my problem, it wasn't their fault or my fault, this was nature's way of testing us. And, in testing times human beings rise together and that's what melts our heart and probably keeps us all going, isn't it? 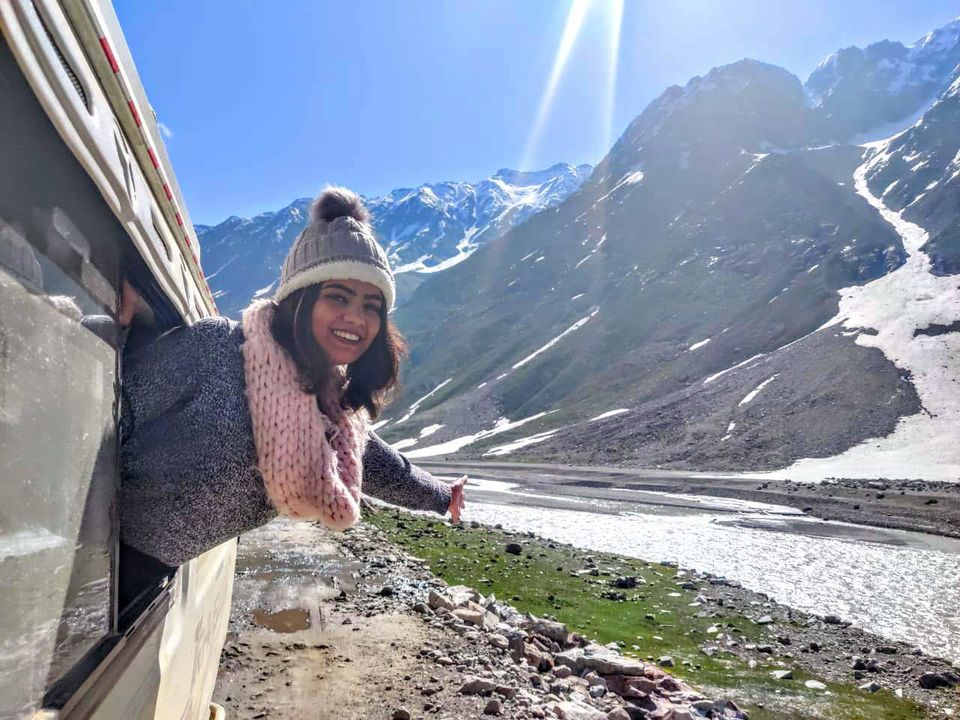