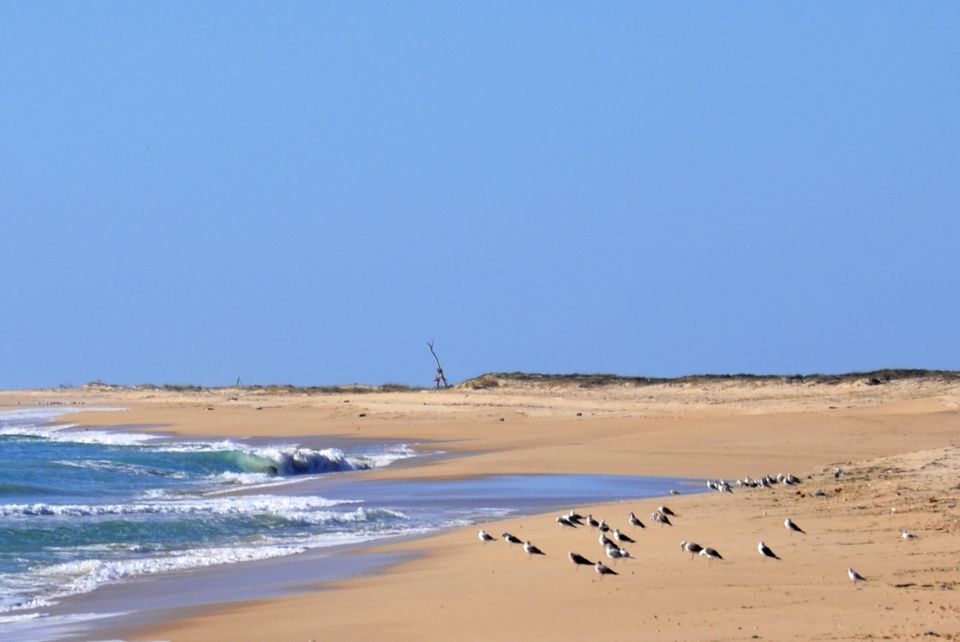 Barreta Island is one of the hidden gems of Algarve region. With a 7km long pristine coastal beach, and almost no crowd, Barreta Island makes for a great day trip from Faro.

Fantasize yourself lying in an island with crystal clear water? Add to it soft golden sands and absolutely no crowd. That’s what you can expect in Barreta Island in Faro (Ilha de Barreta in Portuguese). Barreta Island is the uninhabited and most secluded island in Faro, and in the Algarve region. Hence the island is also known as Deserted Island (Ilha Deserta). This piece of information persuaded us to visit the island on our trip to Portugal. Who doesn’t like having an island to themselves? And we weren’t disappointed! The space and openness we encountered were very natural, primitive and so romantic!

Barreta Island is located on the most secluded part of Ria Formosa Natural Park, a protected natural reserve in Faro, Algarve coastline. The island can be reached only through a ferry service from Faro. The island is also home to only one restaurant Estamine Restaurante. The southernmost point of continental Portugal is located within this island – Cabo de Santa Maria (Cape of St.Mary). The pristine waters and sandy stretch of beach is sure very alluring. Visiting Barreta Island can be one of the best day trips from Faro.

How To Get To Barreta Island

The shortest and easiest way to reach Barreta is from Faro. There are direct ferry services from Porta Nova Pier in Faro which takes about 35 minutes, and costs roughly 10 Euros with return. There are also private water taxis available from the surrounding islands like Culatra or Olhao, although this is slightly longer route.

What to do in Barreta Island

Explore the pristine islands by walking along the 7km long remote and unspoilt coast. The island is almost usually less crowded, even during the peak summer months, making it an ideal spot for day trip. The sandy beaches, soft waves that crash on the sand and the seasonal birds that visit the island makes for a great treat and something not to be missed.

Built in 1999, Santa Maria Boardwalk is a perfect 2km long trial in Barreta island. The trial passes through rich flora and fauna, and gives an alternate experience in the Barreta island.

The unspoilt nature and the accentuating colours of water, sky and sand are very inviting enough to make your stay longer in the island. Catch the most beautiful sunsets from the island.

The pristine waters are irresistible and it would be shame not to dip in the sea. Do note, there are no beach huts or shades in the island, unless you are visiting in the summer months. Shades can be hired from the fisherman’s huts.

If you are visiting the island during off-peak season, do bring your own parasol if you want some shades. Barreta island is one of the few beaches that are classified as naturalist beach. There is an allocated area for nudism in the island, slightly further away from the ferry point.

5. Picnic in the Barreta island

Bring your picnic basket filled with fruits, cakes and sandwiches and enjoy the picnic under the sun with fantastic views and an island almost for yourself. And don’t forget to bring your favourite book and picnic blankets to enjoy the day. Alternatively, go shell collecting in the island.

The island does have one elusive building that runs a restaurant – O Estamine. Located on the east side of the island, near to the ferry arrival point.

In conclusion, we would totally recommend visiting Barreta island if you are travelling in the Algarve region. You will never be able to find such a pretty island that is so secluded like this.