Day 3/4 (Pachmarhi to Madai): When the locals floored us with their hospitality! 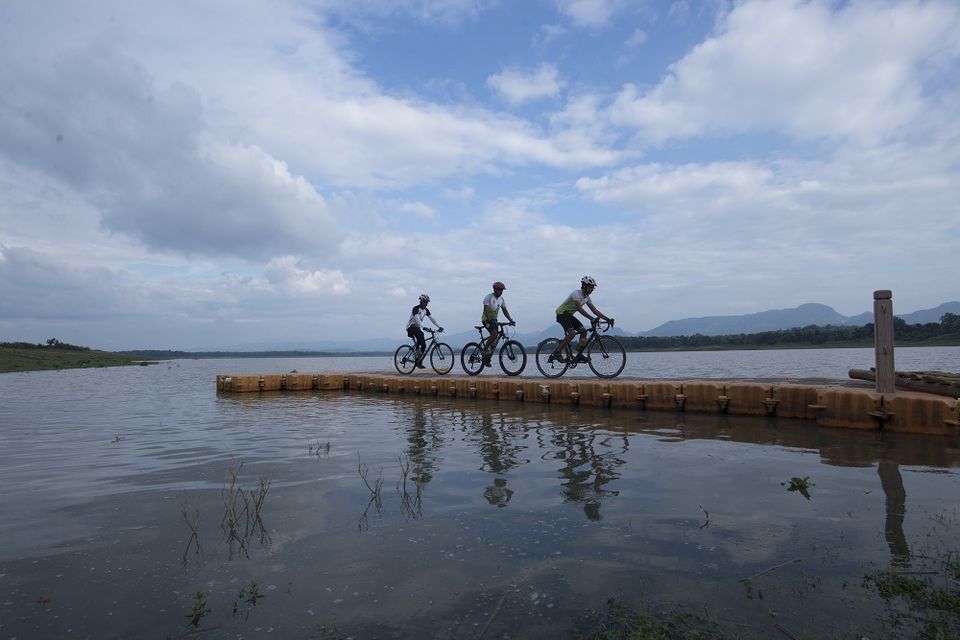 The day started with an announcement that the CS for the day had been cancelled considering its hazard and injury potential. The ride to Madai was therefore going to start not before 9 am. Also all were instructed to wear the green jersey for uniformity. The only exceptions being, those who had won the leader’s jersey in their respective categories, the day before! I was therefore proud to flaunt my leader’s jersey today.

Flaunting my winner's jersey earned the day before (PC: Veloscope) 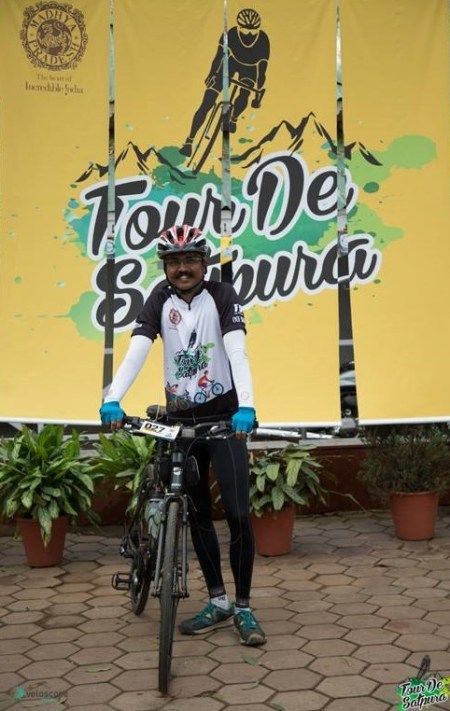 Post a lavish breakfast at Hotel Highlands, there was a photo-shoot following which the manager of the hotel was kind enough to flag us off. A ride within Pachmarhi town leading to Hotel Amaltas was followed with a descent towards Matkuli. The energy sapping ascend of the day before had today transformed into an adrenaline pumped descent. With the Working Elements crew in full mood to get the best drone shots, the bikers were in no mood to relent either.

Therefore despite a request by Sachin and the organisers to maintain sanity on the descent, a mad scramble had begun. For a brief moment in time the typical Indian mindset mujhe kuch nahi hoga seemed to have taken over. The roads on the descent were single laned and twisties ensured that almost all the turns were blind. Maintaining lanes on twisties is one virtue motorbiking taught me, and I was trying to use this to the fullest here!

An orderly descent after the initial mad rush (PC: Veloscope) 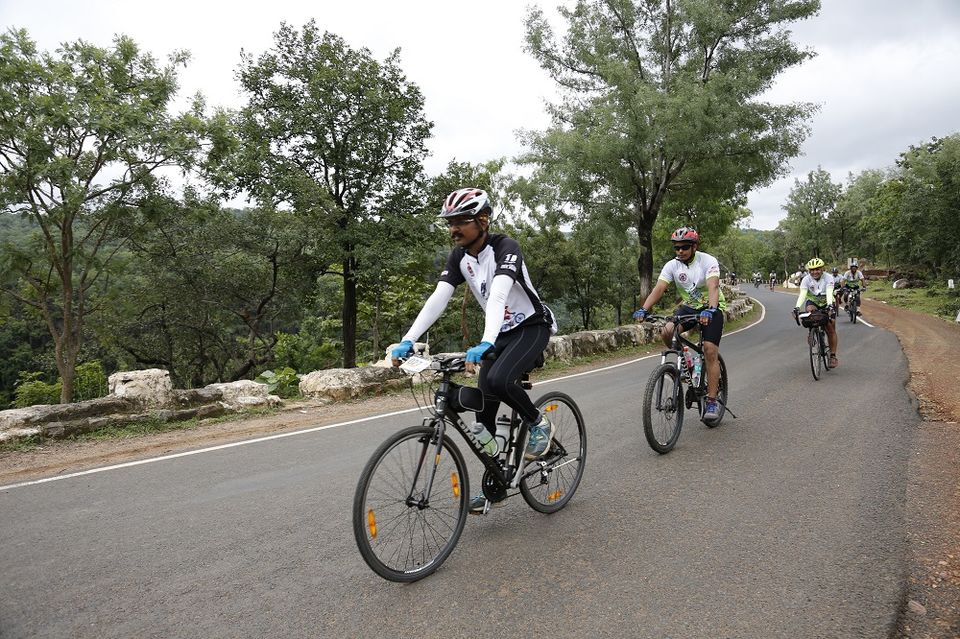 Posing for the drone (PC: Veloscope) 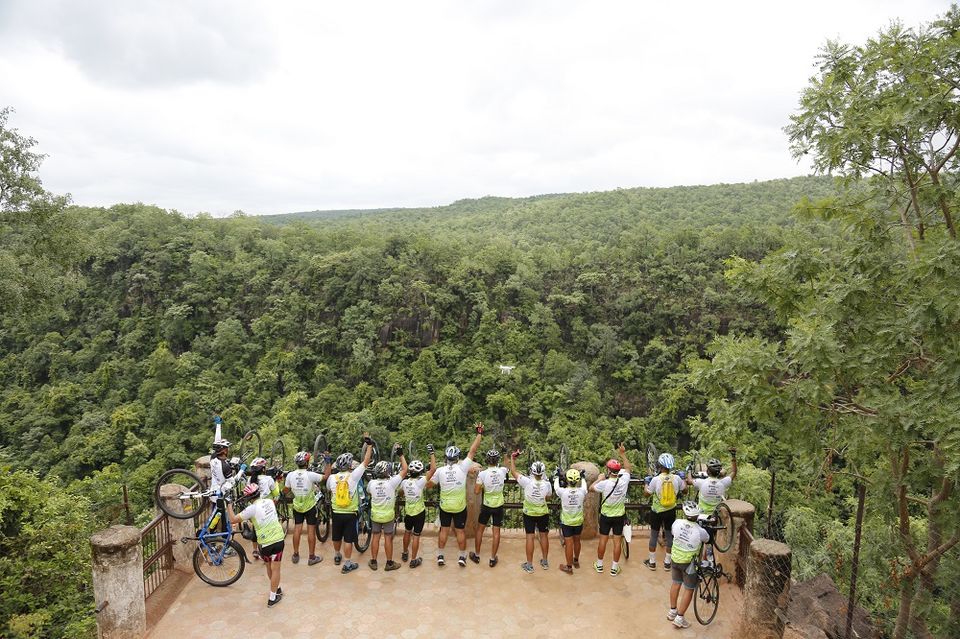 After considerable thinning of the mad rush the camera and drone crew asked the lot of riders I was with to simulate single lane riding and it was here that Yash’s bunny hop stole the show! A little ahead and somewhere near Matkuli as we were crossing a bridge during another photo-shoot moment, the drone was unlucky to crash through a tree and fall into the slush below. Shooting therefore at a temporary halt, the motley group of us riders, aka Sneha, Jyoti, Sudarshan, Nikita, Yash, Anil sir, Chetanbhai and myself made way towards the first SS at the base of Panchmarhi.

Munching on an energy bar at the Support Station (PC: Veloscope) 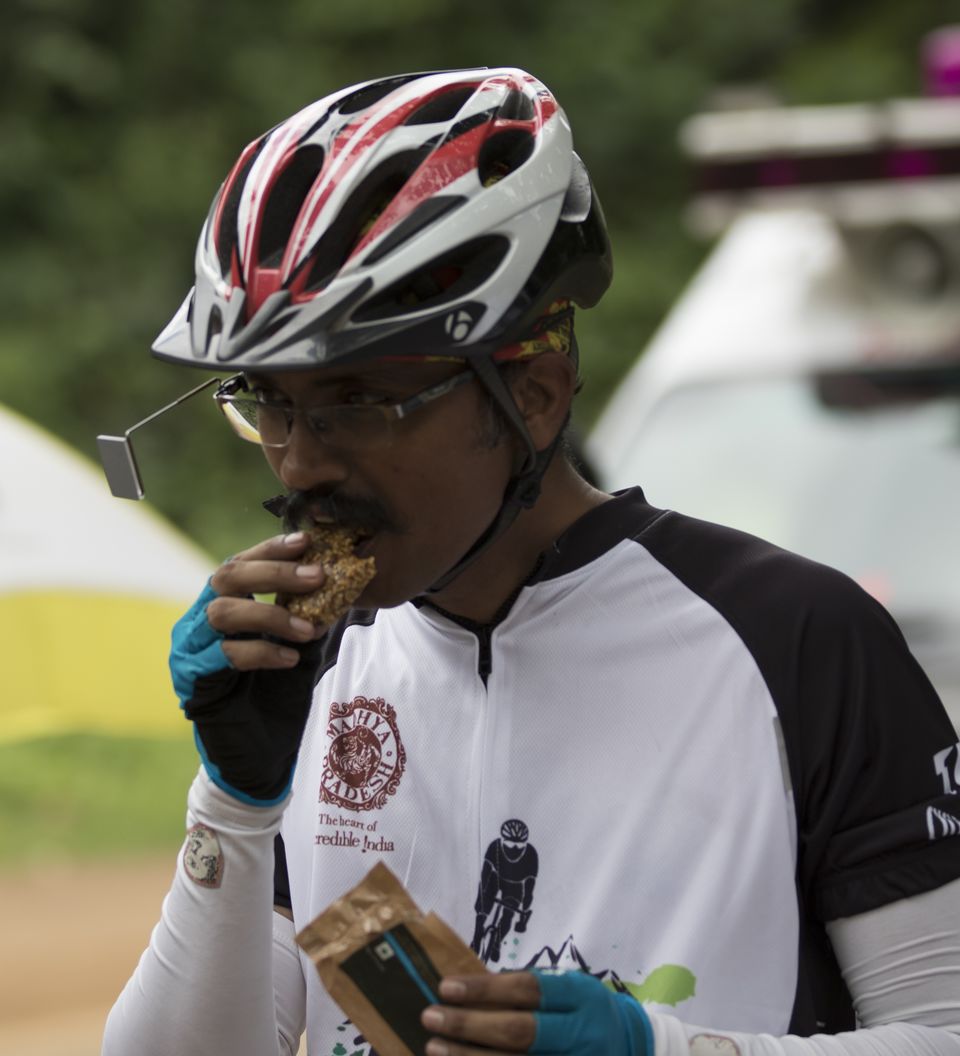 Topping up, I was on the saddle and Pipariya bound in some time. In contrast to a few kms before when we were enjoying the momentum as a result of the gravitational pull, there was a different challenge beforehand now - the traffic of Pipariya! Add to it the occasional dug up roads and potholes. Navigation and adapting to the new “environs” was therefore the new mantra. 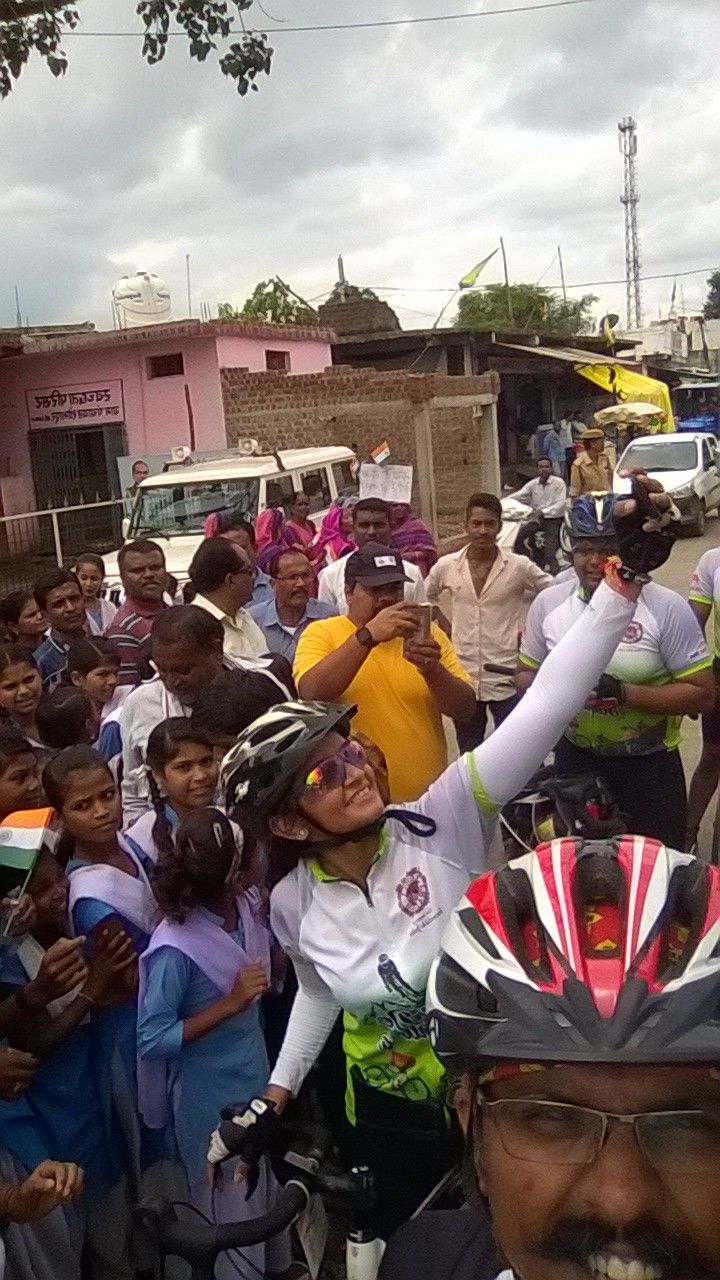 And one more selfie 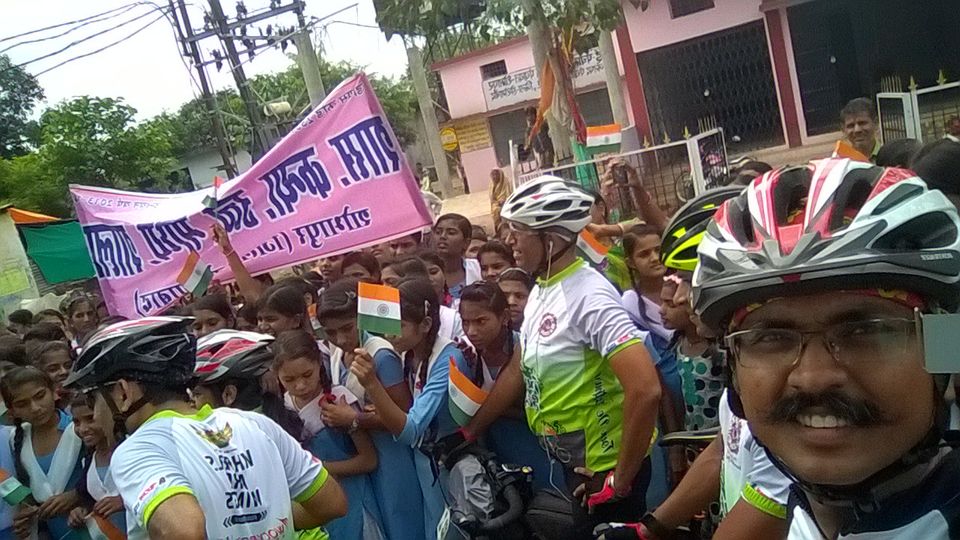 Once out of Pipariya, Sohagpur was the next town enroute. As I, Rishi and Nikita pedalled along we were soon stopped by a mob eager to welcome us! Ahh, the feeling of a celebrity as we were garlanded! Gathering blessings and wishes the three of us latched onto five others who were also from Nagpur. We were on the road only for a couple of minutes that we were again stopped near Sohagpur police station for another round of felicitation. School children, a handful of cops and locals, all eager to wish us for our journey ahead. The undisguised enthusiasm of the people and their revelry for a tour, which we on for reasons of our own, was heart-touching! Just as the flower shower got over and we were about to take leave from the people gathered, I overheard a kid telling the other “Ye chali Ferrari!". This innocent simile brought me an instant smile!

As I and Nikita teamed up here for the road ahead we came across a local journalist interviewing Amit and Jyoti on their cycling experiences. Post recording, the few of us who had halted here were onto the roads again and I observed that Amit, now in addition to the weights on his ankles and his bag was now also sporting a placard, handed to him during a felicitation ceremony, encouraging everyone to take up cycling to combat pollution.

As we diverged on to a road lined by trees on both side, Sneha who was leading our pack suddenly screeched to a halt. The rest of us behind her too had to halt abruptly. A branch from a big tree had fallen on to the road. Looking above, it transpired that a villager was actually cutting the branches of the tree. On asking a local I was told that only those branches were being cut which hosted the nests of a particular bird (not an ornithologist, so wouldn’t venture into identifying the bird) since the droppings of these birds were causing haijja on whomsoever they fell.

At Pandit Dhaba, enjoying the hospitality of a local 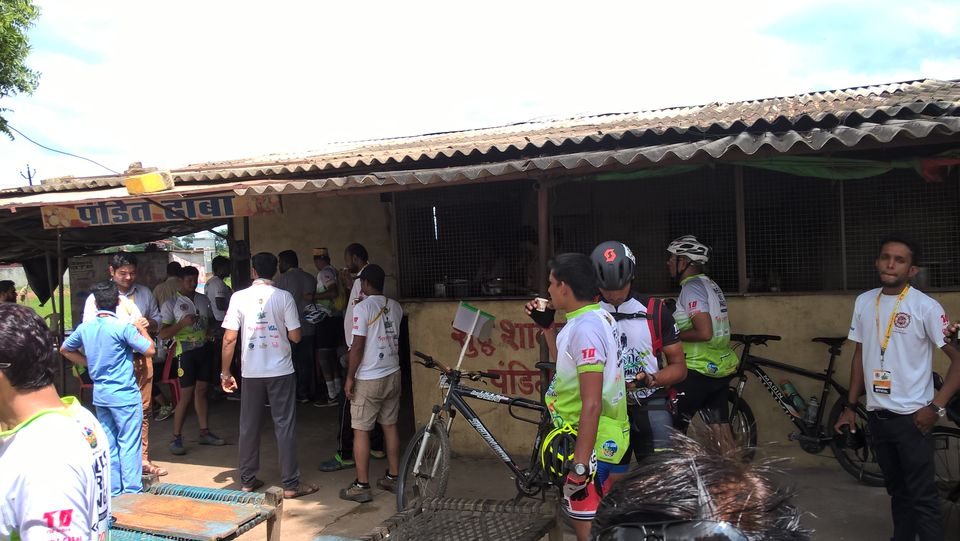 Just as we were trying to come to terms with what was going on with broken nests and young ones of the birds running helter skelter on the road, we had a local villager come up and invite us to his dhaba a little ahead for tea. Invite, I think would not be a correct word, insist would be a better one!

So well, he insisted that he wanted to treat all of us to tea at his dhaba. So here we were – a motley bunch of cyclists, the crew of the previous SS, crew from Working Elements, Sam and Akash from Veloscope and the cops escorting us, being treated to a round of tea with an insistence for another round as well. The owner of the dhaba had bowled us over with his hospitality. Thanking him, we were now Nibhora bound. 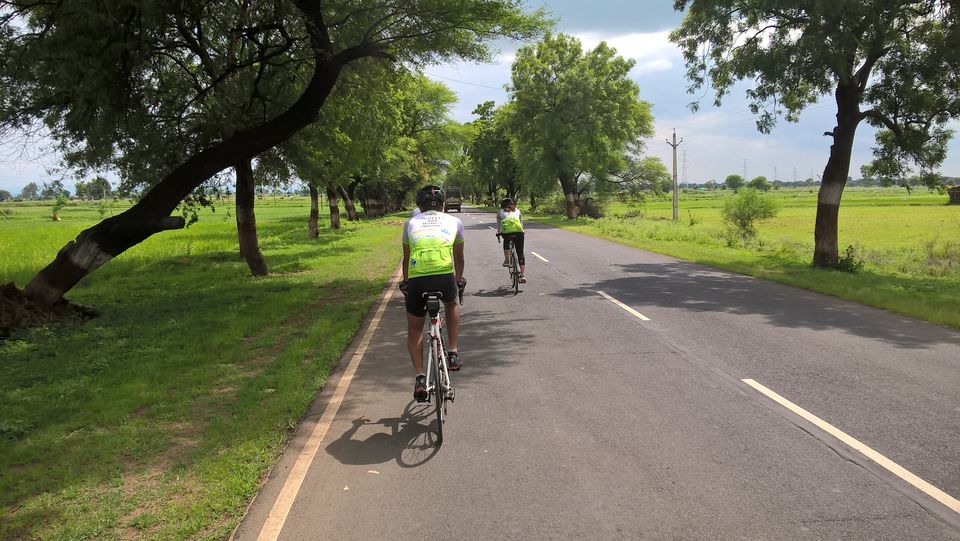 The road ahead had a sprinkling of green pastures and huge trees along the highway. It had taken us around noon to get onto this patch. As such the weather was surprisingly pleasant, and therefore whatever harshness the sun wanted to exhibit us was negated by the tree cover. The second SS was scheduled near the exit of Nibhora town. It was to be identified with a huge board that was to announce the road towards Madai. While I decided to halt and refuel on my water supplies here the others decided to move on. 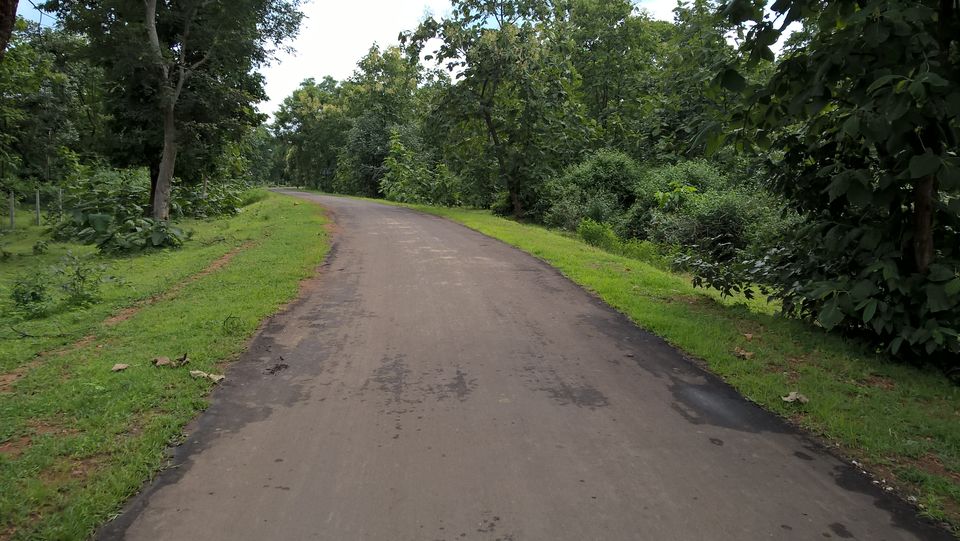 The road ahead was narrow and had much less traffic as compared to Sohagpur and Pipariya. With only about 20 – 25 kms more to reach the destination for the day, I decided to now go at an easy pace. A couple of turns and the roads soon turned isolated. The scenery was now vastly different from what it was when the day started. 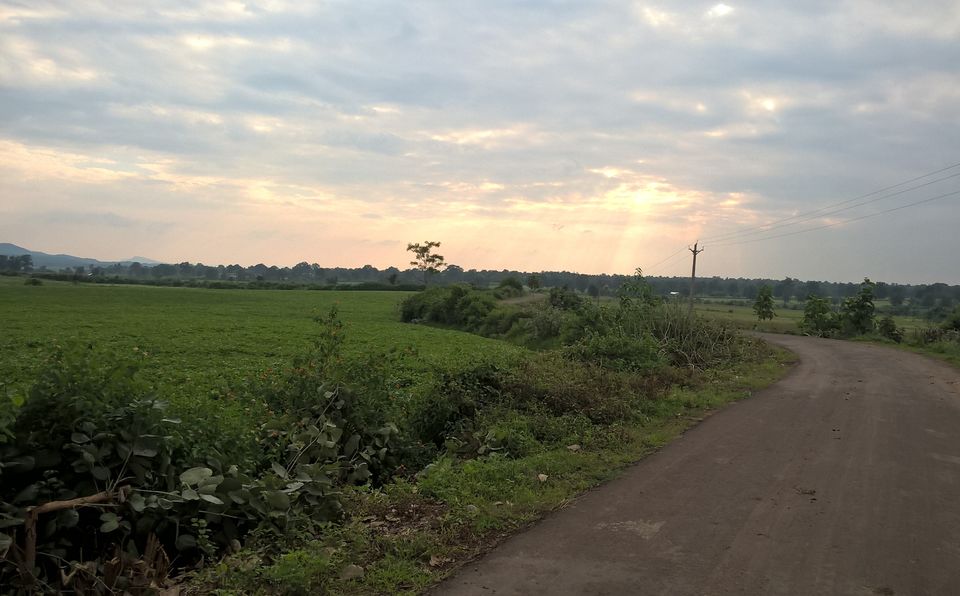 Green pastures of the morning and town traffic had given way to open fields of cereals and paddy. And these soon transitioned into dense green foliage. The 180 degree shift in the accompanying environs was a welcome change. The dense foliage ensured that even the remainder warmth of sun had now decreased to the point of feeling cool. Exaggerated it may sound but I could sense the immense difference in the quality of air I was inspiring. The bliss that Satpura reserve was now offering was mesmerizing. And it was somewhere here that I was joined in by Rajesh sir. 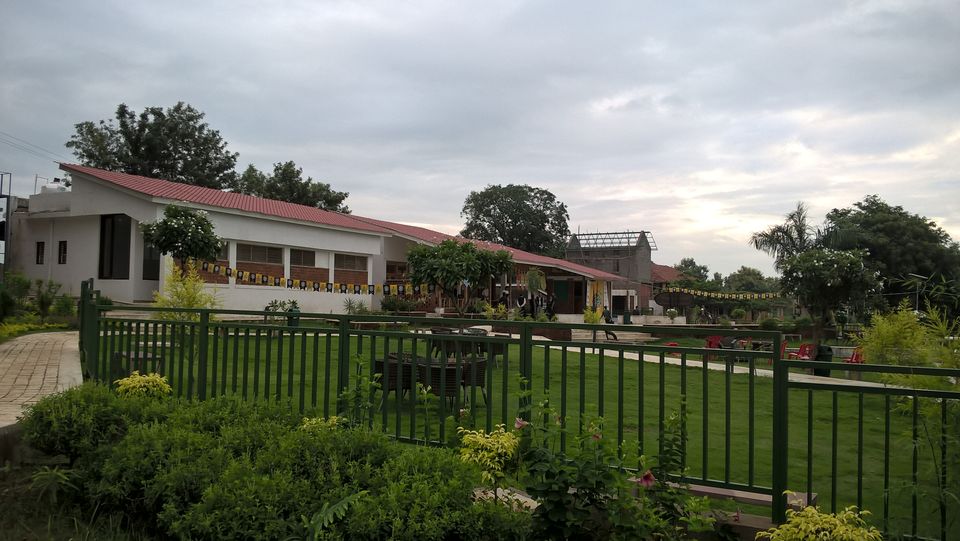 Chit chat over a couple of turns and I reached Bison Resort, our halt for the night. It was about 4 pm and I had covered 90 kms for the day when my ride got over. In lines with the hospitality offered by MP Tourism, juice and hot lunch was waiting for me post which I trooped off again for a photo-shoot scheduled at the edge of the river near the resort. My room-mates, the Choudhrie brothers had meanwhile already checked in. 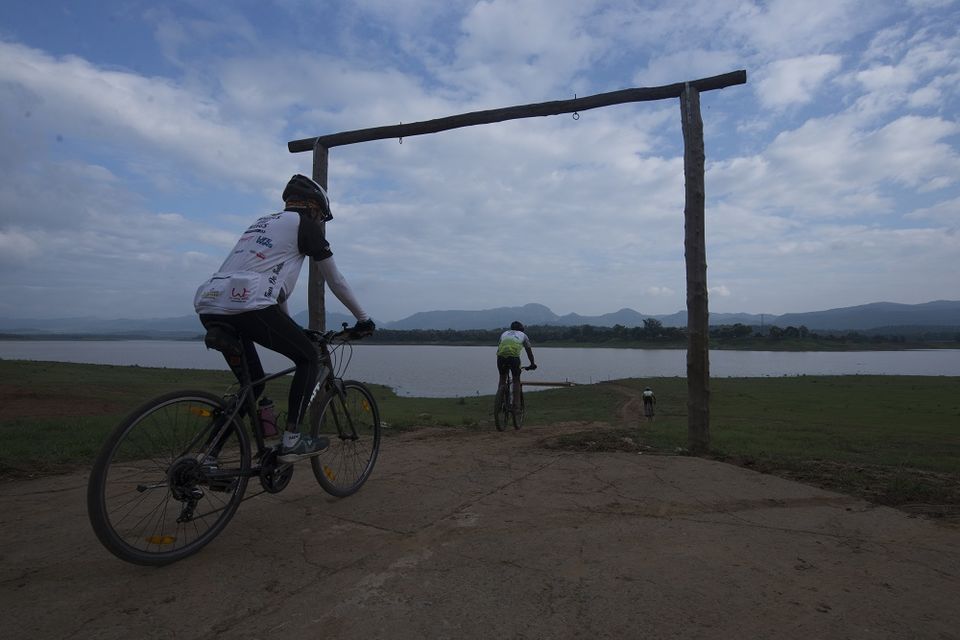 The evening today belonged to Nikita who was to talk on her venture Cycling Cities and her role as the bicycle mayor of Vadodara. While all of us chose to sprawl out on the open lawns her talk was followed by a debate on how cycling could be made safer in India. One of the comments, about an initiative in Aarthi’s city, Chennai whereby drivers of public transport were asked to ride a bicycle for a day so as to sensitise them about the hazards faced by cyclists made for interesting hearing/debate. While I am a staunch supporter of cycling for routine chores in addition to cycling for health, there is no doubt that one of the major factors putting of potential cyclists is the safety on the roads followed by the stigma associated with bicycles, as a vehicle of choice for the lower strata of population.

Like Nikita said, it took Netherlands about 30 years to change to become what it is today – the cycling capital of the world! Let’s keep our fingers crossed and hope that India latches on to this positive change the way it does for all things Western! I am sure it would need something on the scale of demonetization for this to ever happen! Until then I have my fingers crossed!

This post has been originally published by me on my blog EnvironmentFootprints. But nevertheless I would be sharing my experience of the entire Tour here as well. Keep watching this space to know how the last day of the Tour De Satpura unfolded for me.