Exploring Corbett- An off road adventure 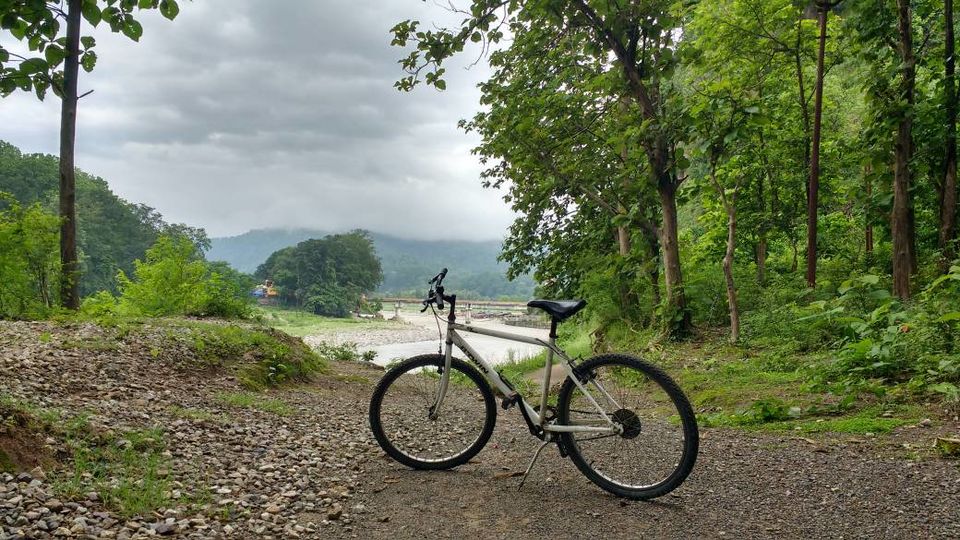 Being a Delhiite, Corbett has been my favourite weekend getaway since ever. It is quite close, it is away from the city hustle and it is the one place amidst the hills, which hasn’t yet been spoiled by all the city people.

So, there we were, yet again for the 5th time in the same old resort. Every time, it has been the same old conventional routine. Chill in the pool, go safari next morning, follow the tiger’s trail and then back in the pool. No! Not this time! So the search began for something... something that could spice up this trip.

By 7am the next morning, we took off on our b-twins, assisted by a guide(what seemed stupid initially) riding along the hilly road heading to visit the Dhangari Gate, about 9 km from our resort. The greyish clouds were covering the best of the sky and all the branches from the dense forests around, were sheltering the roads.

Just when I had started to regret wasting my buck on a guide, he stopped us. He told us to ride along a path which was off the road. It was not the usual cemented road but was the broken one consisting of large rocks and sand and gravel throughout. We took our time making our way out of that bed of rock to finally reach a bridge, made for pedestrians.

The bridge actually had picturesque scenery! The river was flowing beneath while all the hanging branches shadowed it and ahead was a clear view of the beautiful hills, which appeared to be dressed in white and grey due to all the clouds around. These are all local routes which are tough for the tourist to figure out. The guide wasn’t useless after all.

As expected, it had started to drizzle by that time which made the complete scene more beautiful and also made the weather cooler. Beyond the bridge was a path through the moist forests with rocks, dry leaves, puddles and mud. It was quite peaceful and all that one could hear was chirping and the noise made by the flowing river.

The forests ended and we could get a clear view of Garjiya Devi Temple across the river, one of the most popular attractions. The path we now headed on was a narrow one with just the space to accommodate merely 1 cyclist at a given time and on one side was the deep ravine. The ditchy part ahead to the other side could not have been crossed while riding the bikes so, carrying the bikes on our shoulders did give us heebie-jeebies.

Anyways, across the ditch, we rode the bikes down the hill just to end up behind the temple. Carrying those bicycles up the temple steps, the public gave us a look or two. Riding through the temple market we soon caught up with the road and enjoyed the drizzle, sipping onto our tea on a tea-stall just around the corner. 15 minutes later, we were back riding on the hilly road and it took us not more than 30 minutes to reach the gate.

We made a stoppage at the gate for about 15-20 minutes and then started on our way back home. This time, instead of the road less travelled, we decided to take the road which initially seemed a less attractive idea. Getting to the top was fatiguing since it was all uphill. But as you reach the top, you get a steep downhill to the bottom.

The cycle zoomed down the forest road at top speed! I literally felt the wheel vibrate due to such high speed. I felt the B-twin breathe during that 5 min long ride of mine!

FROM WHERE CAN A BICYCLE BE RENTED?

We were staying in Club Mahindra and the adventure team were generous enough to plan a longer route for us on a special request and on our risk. They also provided us with the b-twins and a guide. You can rent the bicycle from various cycle rentals available either in Corbett or Ramnagar. The cycling trip isn’t very common, so you will have to struggle a bit with the arrangement of bicycles. We rented for about 1500 INR/- per bicycle but you can find hour based cycle rentals around the town.

Well, the trip wasn’t so conventional after all!