The craziest first bike ride ever

The Bike Salute at Dochula Pass 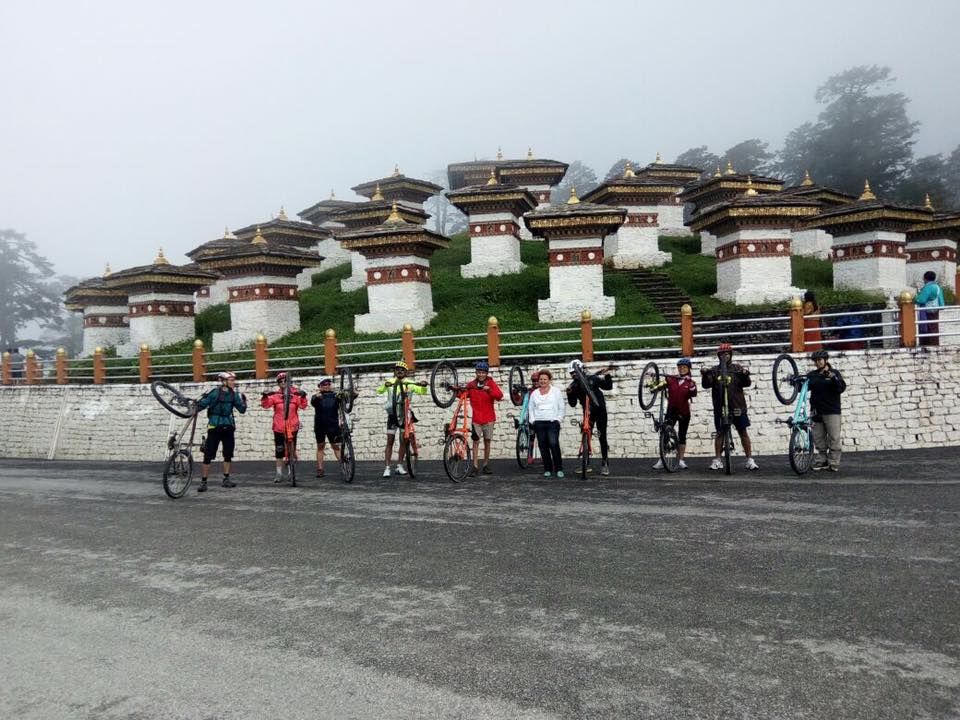 I had never cycled before and here I was sitting on a flight from Kolkata to Paro about to embark on a cycling tour across Bhutan over the next couple of weeks.

However, the nervousness of getting on the saddle was soon overcome by the anxiety of landing safely as the flight waded its way among three mountains one after the other to land. And I lived to tell this tale. The feeling when we first set foot on that majestic land cannot be described in words. The air was the freshest I had ever breathed, the Sun was closer than ever but still not pricky, we were amidst the mountains but it wasn't overwhelming, the serenity around- It was just majestic!

We took a bus from Paro to Thimpu which was going to be our first stop. In the evening we went to the 'Wheels for Hills' shop to test ride out cycles (bikes). We had an orientation session to understand the gears and how to utilize them on the hills. Some of my friends knew the bikes really well and I felt so out of place that the chain came off the moment I started pedaling and changed a gear. Now I didn't even know how to put the chain back in! Finally I managed to put it back in after a long struggle and I fell in love with the bike as I got more comfortable riding it. It was a MTB in fiery orange just the color to uplift the mood with so much rain around. All set, I was ready to take on the adventure that awaited us.

However, nothing prepared us for the next day. The first kilometer was the steepest climb we did. We crossed the road from the Bike shop and boom we were staring at what looked like a vertical climb. How do you freaking walk that path let alone cycle? The question blaring out in my head. But we all went ahead and some of us actually scaled that on twos and not the fours. We gave ourselves a pat on the back but we were so out of breath at the end of it as the legs weren't warmed up when they went through this torture.

The destination for the day was the Dochula pass at the height of 10,200 feet. That is crazy and we had our tongues out through most of the uphill. The only thing that kept us going were the views around whenever we took a breather and the hope of great views from the top. By the time we reached the top, the weather had turned foggy and chilly. So much for the views! But what was to follow blew our minds away.

It rained heavily during our stay at the top where we stopped for pictures and lunch. Once the rain relented, we were on the saddle again excited to experience the thrill of a downhill. The first few kilometers were exhilarating with tarmac roads ensuring the rain water didn't make things treacherous. However, soon the solid roads gave way to muddy roads and finally thick slush. We felt it was dangerous to ride in such conditions and started packing the cycles on top of our bus. However, soon realized that not all the cycles could be perched on top. So, some four of us decided to continue our rides through the slush and the bus would follow with the rest of them. The best decision we could have made!

The next few hours of riding was something I could never have imagined. And to do that on my first ever ride still feels insane. A fraction of a balance lost and I could have been in that slush. And then God knows which bone would have been broken as we were riding at great speeds. The heart was pumping and the adrenaline rushing at an all time high through that slush ridden downhill ride. We finally made it to the hotel after sunset. We were all covered in slush from head to toe and the palms and hands had lost all sensation. We took out a hose pipe and the water came out with great force. Just what we needed to clean ourselves up.

After the first day, we went to the highest motorable pass in Bhutan, through rolling hills and did some offroading. Everything felt like a joyride after the first day! I got hooked on to cycling from there on and since then have done multiple century, 200-km and even a 500-km ride. However, the first ride and the biking experience in Bhutan remains unparalleled.