Flight Or Fight! (About A Bizarre Experience In Calcutta)

Flight or Fight! (About a bizarre experience in Calcutta) 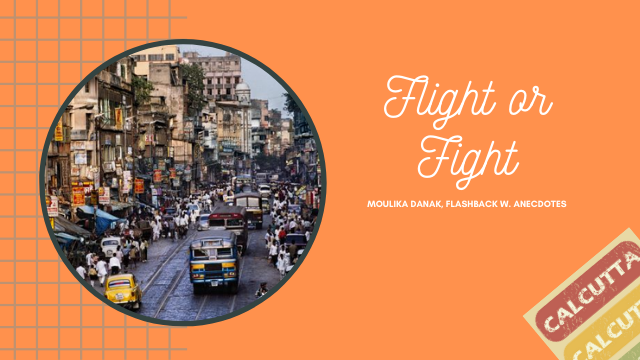 It was after 16 years of living away from it that I was revisiting the city of joy, palaces and tram! I had to meet this metro city and greet the remnant of bygone eras that it had so profoundly preserved; but most of all I had to trace a journey through places that I had vicariously experienced through my dad’s stories. I had to compare the original jhaal-muri to what my mum makes at home. I had to relive my ritual of struggling to complete a big, fat, sweet ‘daab’(coconut water). I had to justify the many beliefs that I had dearly held for 21 years like how ‘puchkaas’ are way more appetizing than paani-puri, how ‘singaras’ are real samosas, why it’s not a ‘roshogulla’ if it’s not a K.C.Das-make and truly revel in the satisfaction of soft sondesh melting in my mouth!

Thus, began the series of my adventures and misadventures in Calcutta! After navigating through its iconic landmarks and stunning marvels, I happened to find myself in a teeming labyrinth of Burra Bazaar’s roofed lanes. The scene playing in front of my eyes was of a street overwhelmed with hawkers, fishes, food stalls and hand-pulled rickshaws- all battling to find space and survive. And in my head, it resonated with ‘Machhua’ aka Trouble - the area that I was very specifically instructed to avoid. So, with zero network access on my phone, I headed straight to find a very credible local who could show me a way out.

I ended up on yet another trodden, cram-full footpath busy with time-worn shops, shoe-makers, fruit-sellers, tea stall and happenings more than I could register. Riveting, I looked at flavours of life unfolding in these forbidden lanes when a bright yellow taxi drove in my sight like a ray of hope!

An obese overjoyed man in his early 40s stepped out of it and gave a generous smile. I looked at the taxi, waiting for it to move forward. I looked at the man. He seemed like a rather jolly geezer. The taxi didn't move but the chap did, right in my direction and before I knew he was running- a pitiful sight, I must say. But as soon as I realised how I had underestimated his capacity, I started running in the opposite direction. A few minutes into the chase, I realised that I had also overestimated my own stamina. Running with bag and camera gears on a dehydrating March noon was out of syllabus and not at all cinematic.

When I knew I couldn’t go any further, I did the most bizarre thing and started running towards him. He decelerated, looked back in confusion and ran away with double the speed. Just when I was wondering how long this chase would keep me running, he merged into the crowd and disappeared. I had beaten him at his own game; relief and shock, both hit me at once!

Unbelievable, isn't’ it? That sicko double my age could run faster and better than I could. Sigh!

RUN. But only on treadmills!