It was a fine morning. The feeling of being home after so long had enveloped me. I could smell Spiti and I was waiting to see it, once again.

But not before I trekked up the little mountain at Nako, to get to the temple I had seen on my previous visit in August - when I trekked a little and saw some temple / chortens at a distance, but couldn't go then.

I was joined by Vasu, while others kept sleeping. I checked with the camp guy how to go about it, he showed a route, but it was closed. I did not want to barge into someone's personal property so decided to take a de-route, which would have diverted from the place till I walked last time (just a 100 meters, but it is something).

Not even 50 meters and Vasu showed signs of fatigue. Yes, it's a little steep initially. I went up, waited for him for 2-3 minutes. I saw him panting and resting. And I knew he won't be able to make it. I went a bit further to check how difficult is it gonna be. It seemed OK to me. I called out Vasu and told him that it will be a lot easier ahead, and started to walk. Thank God he did not listen to me. Because if he did. he would have abused me all his life.

I kept on walking on the uncharted path, hoping to connect to the trail I saw. The more I walked, the farther I kept getting away from the destination. REALLY?
And then came the monstrous stones I had to cross. I had to use all my 4 limbs to be able to.
Slipped, fell, bruised.

And then I had the most brilliant idea ever. I kept the camera in the camera bag and the trek had become 50% easier!!
As I was still looking for a trail, where no trail existed, I saw something. An animal to be precise. Guess it was looking at me. And it started moving. Getting away from me. What was it? Jackal? Fox? Wolf?

And all of a sudden the thought of taking out the camera struck me. But too late. It was gone. And now, I started my little walk again, through the stones that were unforgiving.
And I saw the animal again. I tried to look at it, but the sun was blinding me. Guess, a fox. Before I could take out my camera it disappeared again.

And now, I followed his direction. That meant going a little off the trail, of a non-existent trail, but did that matter? I was going nowhere anyways. A completely different direction than what the Camp Guy asked me to take. Guess, I was liking the raw and wild nature of the stone carpet I was walking on.
Upon reaching a point, I took out my camera, and started looking for my little friend. And there it was.

I continued my little walk through step farming fields, climbed over walls, slipped, and got bruised again and again. But came nowhere closer to the temple. It was nowhere in sight either. It was somewhere on the left. Far from my sight. But there was no way to go up left unless I was a superman. And I told myself that I'll stop after climbing to that point if I still can't see it. I reached the point. It was still out of sight. And then again I chose a point, and told myself to stop if it's still not visible. I reached the point, and still the same result. And then I chose another point. And as I was about to reach there, I heard the water gushing. Sounded like a waterfall. I was excited. A waterfall at such a place was almost impossible to imagine. My feet moved faster. My body felt better. And as I progressed, I realised, it's not a waterfall, but a stream. The absolute silence in the region had magnified its sound.

And I was elated nonetheless.

I continued, wondering should I halt my little walk or carry on. Time was a factor too. We had to leave on time, 9AM was what we had planned to leave NAKO to be able to explore around before making a stop at any of the places in Spiti.

While walking I kept telling myself to reach that one last point beyond which if the temple is still not visible, I'd return. Well, it still wasn't. And while all this was happening, I understood this about myself - I won't stop, no matter how many more places I reach from where the temple isn't visible. I realised my love to walk, all over again.
The last time I did was, just 3 weeks back when I trekked from McLeodganj to Triund to SnowLine, where my fellow tarvellers stopped, but I never wanted to. I took a stroll to see the places around. I wanted more and more.
I never wrote about it, but it was a crazy weekend trip - Delhi - McLeod - SnowLine and a little further ahead - McLeod to Delhi - all on a weekend!


And then, while climbing to one such point, I saw a little colour, flying in the air, what could it but the flags at the temple. Surprisingly, they were much much below. I had climbed a bit too beyond I was supposed to. I had climbed farther to see what lies on the other side too. N I had climbed enough to see a 360 Panoramic view. And I relished it like no other. I could see a lot standing at that point. Nako village and lake, helipad, Leo and even Yangthang I suppose.

I started climbing down to the temple. It was beautiful.

And while chanting a few mantras in front of the chortens, I heard a voice. Looked up to see an old man in the house, or the temple. He invited me in. Got to know he comes there everyday to light up the diyas. I looked at the temple. Sat and offered my prayers. The kind man offered me tea. And what a way to prepare tea. And conversations followed.

Time was a luxury I din have, and had to start my climb down. The man joined me for the same. But not before I got a mini chorten as a blessing from him (Sorry, don't have a picture and it is now a part of the little mandir I have at home).

He marched like a rockstar. Only stopped once to relax for a bit, and I gave him company. We marched down, via the easy way. The same way which was shut and I took the rather uncharted way, which even surprised the old man. 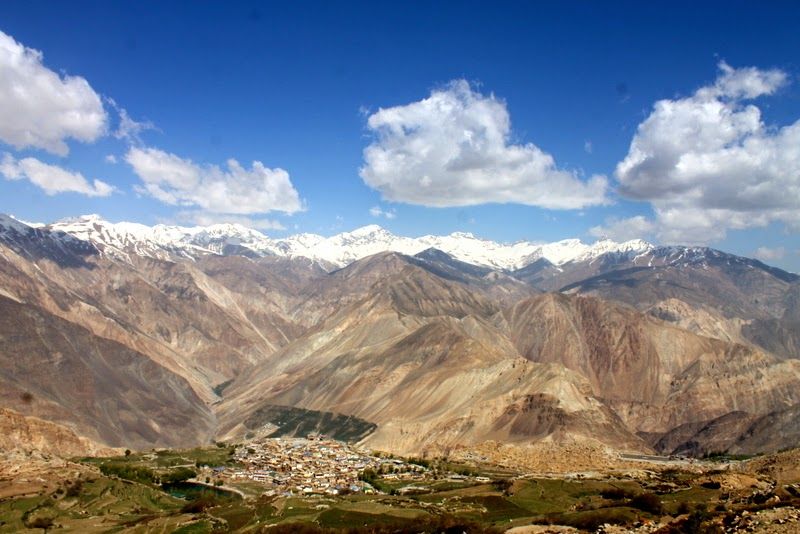