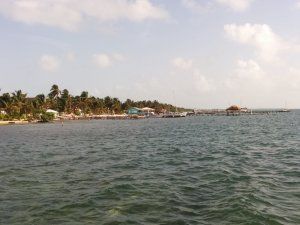 Right. So I left Guatemala a week ago this morning, but due to my epic laziness in Belize (and the surprising general lack of serious morning drinking that usually leads to extensive blog writing on this trip) I'm only just getting to writing up the three day wander from Caye Caulker (Belize) through Flores, Guatemala, to Tikal (just up the road) and then connecting on through into Mexico - a trip it turns out was much, much easier than I anticipated!

I left Caye Caulker on the early (-ish) water taxi back to Balize City, with a plan to sort out the bus ticket to Flores from there - which was meant to be (and as it turned out, was) pretty simple. As I was getting off the boat, I bumped into Evan, the Aussie who I'd been diving with and drinking with over the past few days. Once we'd sorted out where our backpacks were, we grabbed a coffee at one of the (many) little places at the water taxi terminal, and met another solo traveller, Maggie, who it turned out, is from Oakland.

As we sat about, waiting for the bus into Guatemala, we all got chatting to group of Scots - who, as it turns out, live about a mile away from me in Edinburgh. Eventually, we got to 10am, and the buses started to go. Evan had bought his ticket on Caye Caulker and so had ended up on a 'second class bus' (as it turns out, it was a pretty comfy minibus, which didn't have an hour long wait at the border for all our 40-odd passengers!), but all of the rest of us were on the same one.

The ride was pretty uneventful until we got to Santa Elena (which is the larger town, maybe 500 metres across a causeway from Flores, as Flores is in the middle of a lake) where we had to change from the big bus into a series of minivans. This did give us (really, just about everyone on the bus - although not surprising as nowhere in Edinburgh has them available) the opportunity to get to a cash machine to get hold of some Quetzales! Once we got into town, I followed Maggie to a hostel - she's spending about 6 weeks wandering about Guatemala (barring the weekend with a friend in Belize) - so has found a decent cheap one. There's a proper backpacker one, but I was only there for a flying visit, partly to see Tikal (and Temple IV) and partly as an easier cut-through back up to Mexico, so the big party hostel wasn't really my plan. Once we'd checked in, we wandered out for a beer or two, then grabbed a bit of street food - amazing tostados for 5 quetzales for three, or 3 tamales for 10Q (It was like Mexican Christmas! [actually, casual racism aside, it did make me look forward to Christmas for my sister's mother-in-law's tamales!) At this point, I think it was about 12 quetzales to the pound, so maybe a quid and a half for dinner - not so bad!

After all of that, we ended up at Los Amigos (the backpacker hostel), where we ran into Evan, and a couple of others who had been on the bus with us. The rest of that night (a slightly drunken stumble to find the only cash machine in Flores aside) was spent drinking, hanging out, chatting and finally playing massive drinking jenga, before heading back to the Hotel Aurora where I was staying.

The next morning I got up for an 8am minibus (that I'd booked - probably at a bit of a commission - through the guy that ran the minibuses from Santa Elena to Flores) to the ancient Mayan city of Tikal. Now I'd been to Chichen Itza a week before, but this was nothing like it! Tikal is pretty much still in the middle of the jungle! The guy who brought us in (he ran tours, but I opted to wander on my own) compared it, at it's peak, to New York CIty, it terms of lack of vegetation - 1500 years ago it was the capital of the Mayan world, and would have been stone and cleared land as far as the eye could see! Even in the (maybe) 10% that has been cleared in modern times, it feels like the middle of the jungle - if I'm honest, I expect the Rwandan Gorillas that I'm going to see in February to live in something not dissimilar to Tikal!

That said, the bits that have been excavated and can be seen are truly spectacular - the best (unsurprisingly) is Temple IV - the famous one from the first Star Wars film. I like to think I got a reasonable photo from the top too - but photography and sci-fi nerddom aside, even with the mass of people (relative for being in the jungle, where wandering about you could feel as alone as wandering in the Scottish Pentlands for 15-20 mins at a time) it's simply one of the most impressive, belittling and incredible places I've ever just sat and looked over the world! Eventually I felt I needed to move on, but if I'm honest, I could have sat at the top of Temple IV for hours, just staring across the Yucatan jungle, listening to the howler monkeys and contemplating (as I do at times of impressive natural beauty) the amazing shit that humanity has done, and how - even more impressively - nature will come back and fix it, given enough time!

I wandered my way back from Temple IV (the furthest point, as well as the most impressive) and headed back into Flores for another night, before moving on back into Mexico. Once I got back, I sat for a bit, then headed out for a beer - planning a quiet one ahead of a 5am bus the next morning! Evan, Charly and Dan (the two Brits) had hung out for the day around Flores, in the lake and about town, and while I was sat with my first beer, I noticed Evan and Charly paddle past in a kayak - a bit later, after a couple of quetzales of street food - I ran into them properly, and we went for a bit more food, another couple of beers and a bit of a wander until I needed to head off for my early start.

I'd maybe been in bed for half an hour or so when the landlady came up to the room looking for me. Unfortunately, English is not, at all, a common language in Guatemala - even in tourist hostels in tourist towns - so I didn't really know what she was getting at...luckily one of the other guys in the room helped out, and told me (at about 9:30pm) that my 5am bus had been cancelled, and I'd be getting an 8am instead across the border to Palenque. I wandered downstairs, and had chat with the guy that had shown up (for a slight bit of explanation, the bus company picks up from the hostels, so that's why they knew where I was), and confirmed I could have a lie in. Next morning, I got up waited for my bus to Palenque, which did (although I was a bit nervous) turn up on or about 8am (about 8 minutes past for the tedious English of us...) From there it was fairly straightforward: much more than I had expected! My understanding had been that there were no deals/straightforward routes from Flores to Mexico aside from going via Chetumal (and so doing a big loop around the whole region). I ended up being able to buy a ticket to go from Flores to Palenque - which was my original plan!

Now, the one I had bought, and the one I travelled on were slightly different! The one I bought was along my assumed plan: from Flores to a border town called Bethel, onto a boat for maybe 40 mins, then another bus along the way. Everything I'd read said this needed to be a solo bit of chicken-busing, but no; for 200 quatezales (twenty-odd quid) there was apparently a minibus-boat-minibus through the route. Except then it was cancelled!

The replacement, however, was apparently because the roads on my route were flooded, so I got the (probably) fancier, and so more expensive route (for no more money) via El Ceibo, which was sort of somewhre I'd heard of - actually I'd heard of going via
El Naranjo - although I'd not found much detail about it...theres probably a detailed post on this later this will be plenty useful to many trying to do the route I did (or at least to google it, like I abjectly failed to do in a useful way...)

Anyway, after a largely uneventful border crossing, with a somewhat boring lack of story that my anticipated river crossing via Bethel/La Technica/Frontera Corozal would have required, we changed minibus at the border, did the anticipated checks (with no exit fee from Guatemala, which I had been otld was 20Q) and then, eventually, got to Palenque.

I'd decided, despite the advice from people in the Valladolid hostel, to skip over Palenque - despite the ruins - and move straight on to San Cristobel (also a recommendation from Valladolid). There had been an English couple on the minibus from Flores, who were planning to do the same, so I joined them for the five hour layover in Palenque before the night bus onwards to San Cristobal de las Casas. Little needs to be said, given the name of this blog, aside from several beers were drunk, and a few portions of Mexican food were consumed.