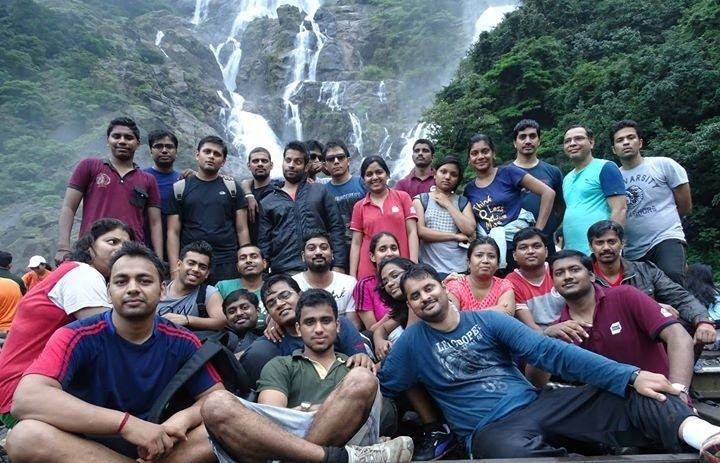 Dudhsagar which translates to 'Sea of Milk' is located on the Karnataka-Goa border, 1.5 km away from Castle rock station in Karnataka. The only way to go Dudhsagar is by train and it is one of the most beautiful route in the monsoon passing through the tunnels, waterfalls and the thick forest.

It all started on the Friday night, We are 30 people and as we didn't got the seats in the Vasco Express from Hyderabad to Goa, we had to book our tickets in 2 trains. The first being Hyderabad to Guntakal Junction in Yeshwanthpur Express and the second one being the Amaravathi Express from Guntakal Junction to Sonalium. The first train started from Kacheguda at 9:00 PM on friday night and we have to get down the train at guntakal junction as we have the other train from that junction. As it was a connecting train (the second train doesn't start, untill the first train comes to the station, as the second train will connect to few coaches of this train) we dont have to worry about the second train being left the station, before this train comes.

At 4:00 AM we reached guntakal and at 4:15 AM we boarded the Amaravathi Express at the same guntakal junction. The train was crowded as it was coming from Howrah and our seats were occupied by other people. That morning we waked them up and it took 30 min to settle in our seats. 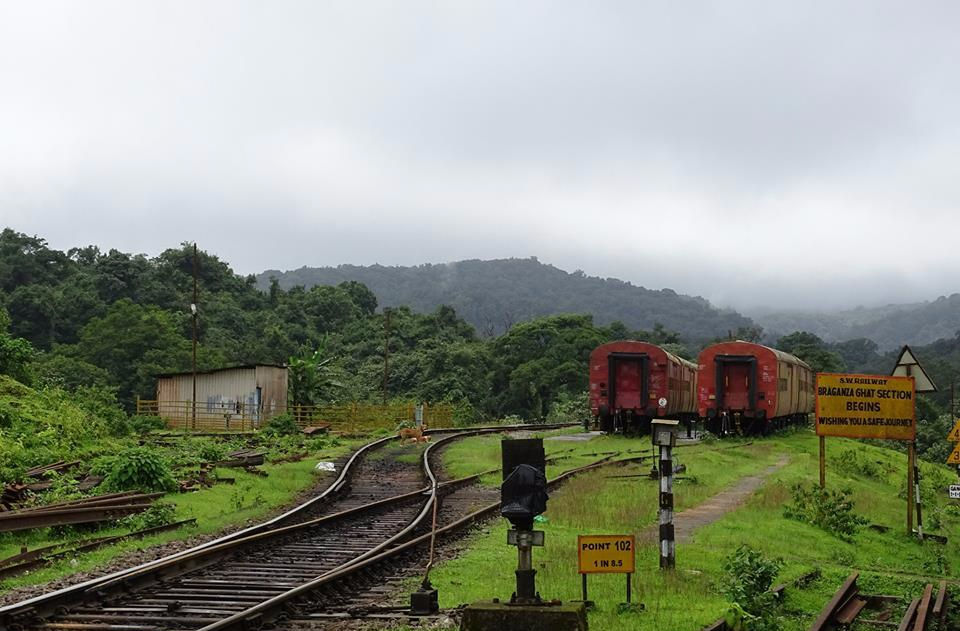 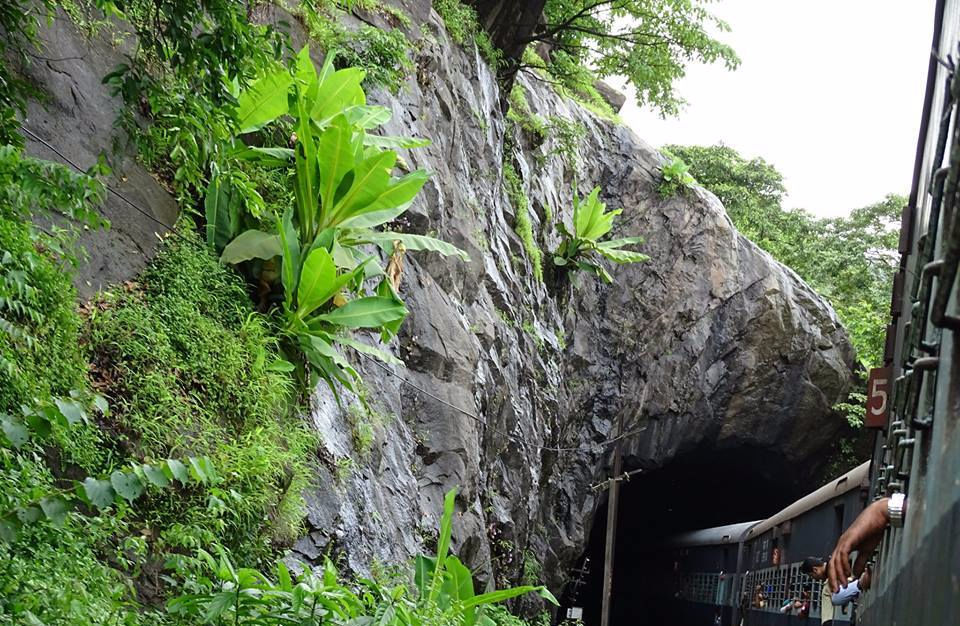 At 12:45 PM on Saturday, the train stopped at Dudhsagar Railway Station, but the RPF(Railway Protection Force) didn't allowed anyone to get down at that station as Dudhsagar was banned for the people to trek. We got down at Sonalium station, the station after the Dudhsagar waterfalls station and it didn't even looked as a station too. 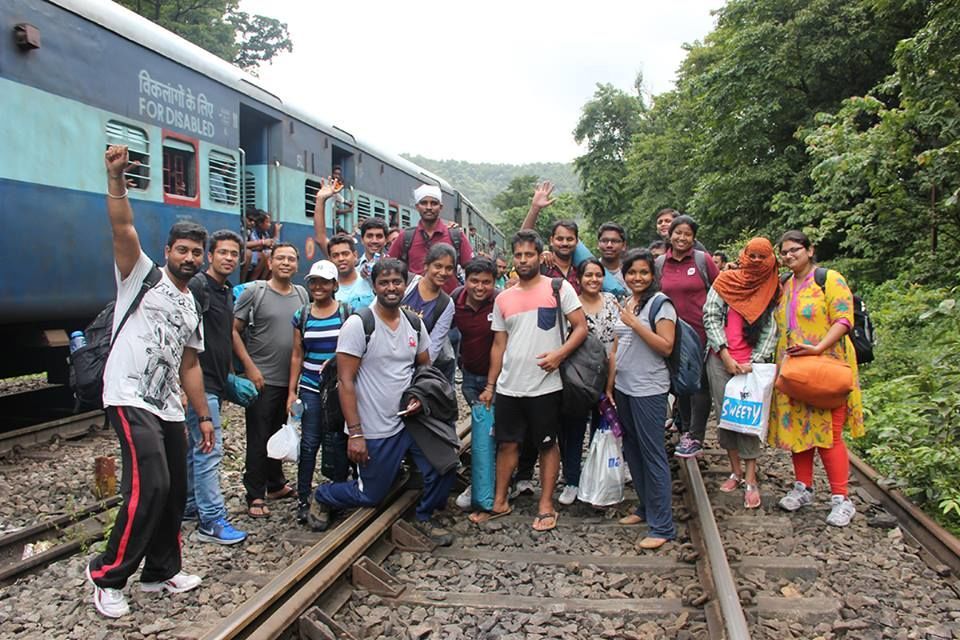 As soon as, the train left the station we were surrounded with the railway tracks and the lush green forest. After few meter's we got into the first tunnel which was 300 mtrs. From there it was single track with both sides of the tracks being forest. After walking few mtrs we decided to stop and pitch our tents besides the railway tracks 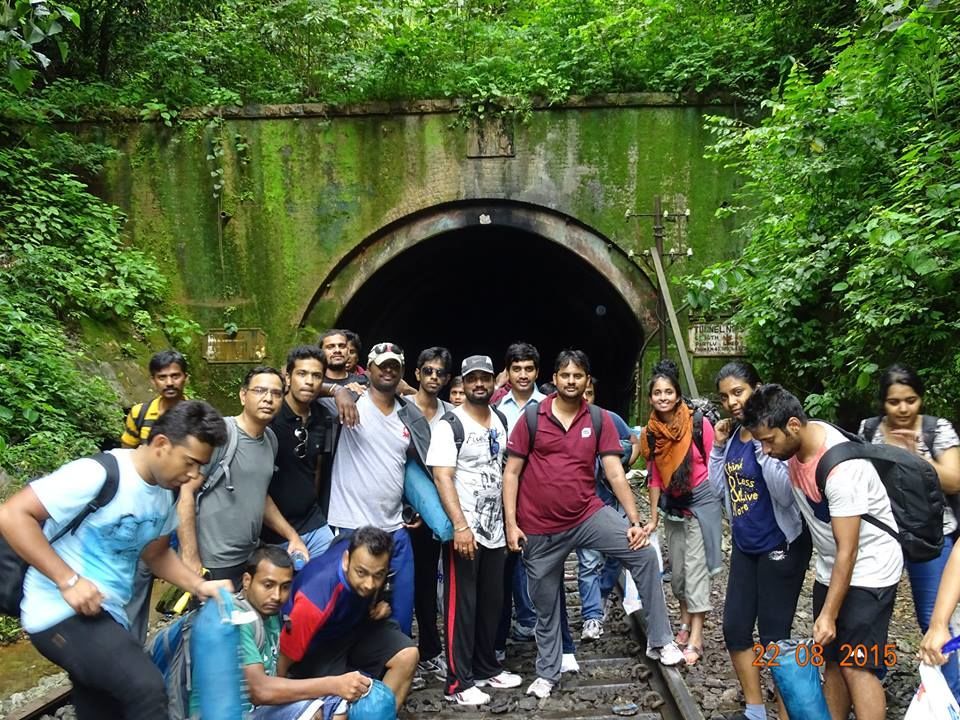 At 3:00 PM five of us (Dheeraj - Guide, Giridhar - Organizer, Shilpa, Meena, Sumitra) started from the place where we pitched our tents towards Kulem to bring the food for all of us. They were followed by another 3 (Tushar, Vikas, Pankaj) and followed by 5 of us (Me, Raj Pandey, Kishore Negi, Praveen, Pawan) because i was feeling that we didn't came to just sit in tents instead we can explore a new place. As it was a straight route through the tracks we don't have to worry about the directions, after walking for minutes the second batch 3 of them were coming back, they thought it might be still a long way to go. So now the 1st batch - 5 people were very far from us (slightly visible and not at all visible if there is a curve) and we were following them along the tracks with both sides being the forest. At one point they deviated from the tracks and gone to the right side of the tracks into the forest. At the same point even we entered inside the forest and we got to know they diverted by seeing a river passing that side. We took rest for 10 min there and after this spot only 4 (Dheeraj, Giridhar, Meena, Sumitra) of 10 started to Kulem to get the food. We 6 of them stayed there for 2hrs at the river side and took some pics and started back at 4:30 PM to the place where we put our tents. We were walking and walking and walking, although the route was straight on the tracks we felt like we missed some where and there is no one to ask the route and we were just walking and it is getting dark and at around 6:30 we came to our tents. The moment we saw our batch it was like a joy inside. 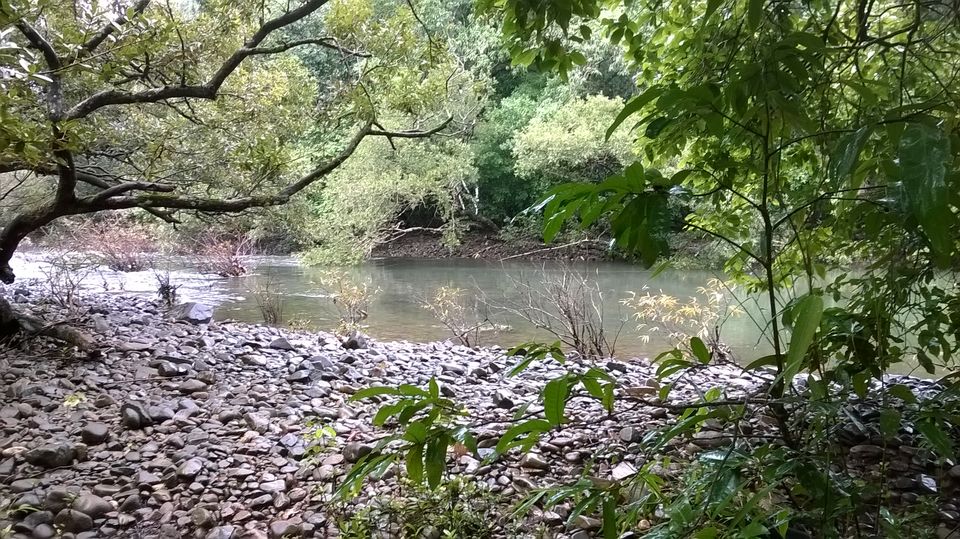 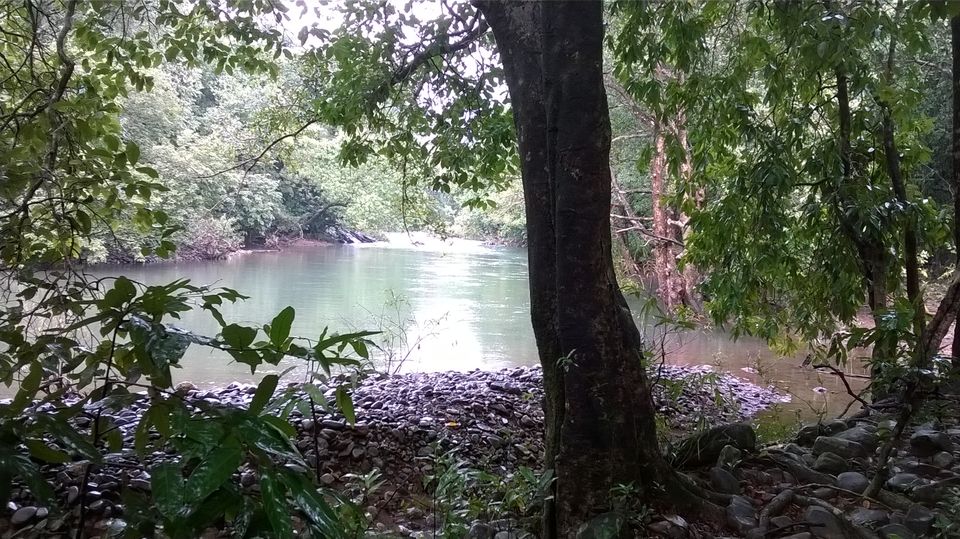 We took a bath near a small pool there and got freshen up, but the 4 people who went to bring the food didn't joined us even after we cam back from the bath at that pool. It became dark and the time was 8:00 PM in the evening in the jungle but still they didn't returned. So, we were discussing to go there, thinking they might have stuck somewhere or they might need help and 2 of them were girls. We decided to start to find them in the jungle on the tracks but then we know as we walked for 4Kms there's no deviation in the route and it was a single track. Everyone became low and everyone's mind was thinking in many ways and many questions too. Are they safe? Do they need help? Is someone attacked them? Did they found any wild creature in the jungle? Have they lost the way?

Then we decided to search for them in that forest by going towards them on the track, but then we stopped thinking that this group might get lost at that night. We cant even shout in the forest at that time, as some wild animals might attack us. So the only option we had was to stand on tracks and putting torches so that they can identify the place from long distance. For everyone's hope they came at 9:00 PM with the water-cans, food in one hand and torch which were about to stop of low battery in another hand. Then we asked them what was the reason being this late. Their answer was, it took time for the village people to cook the food for 30 members and by the time they start from that village it was around 6:30 PM and was getting dark, so they asked the station master to drop near this location and even asked the driver of the goods train which was starting at that time, but that driver didn't agreed to them. So they have asked to atleast take the ladies and go, even then they were not agreed on that and were telling not to enter the forest in this night as wild animals will start to come out. So these people doesn't have the option but to come by walk.

We ate the food, it was some rice and few of us started sleeping and others were collecting the wood pieces to put the fire, as it was raining now and then wood pieces are wet and it could not catch the fire. We came on the tracks and were singing the antakshari and all in that mid night. There are lot of insects and creatures on the tracks, we have to be careful. At 1:00 AM on that night, it was full dark and there were some sounds coming and we saw something was flying and few of us saw some creature on the tree above the tracks suddenly the atmosphere became scary. Although our tents are just besides the tracks, we came back from the tracks and sat near the tents.

On the railway tracks in the mid night 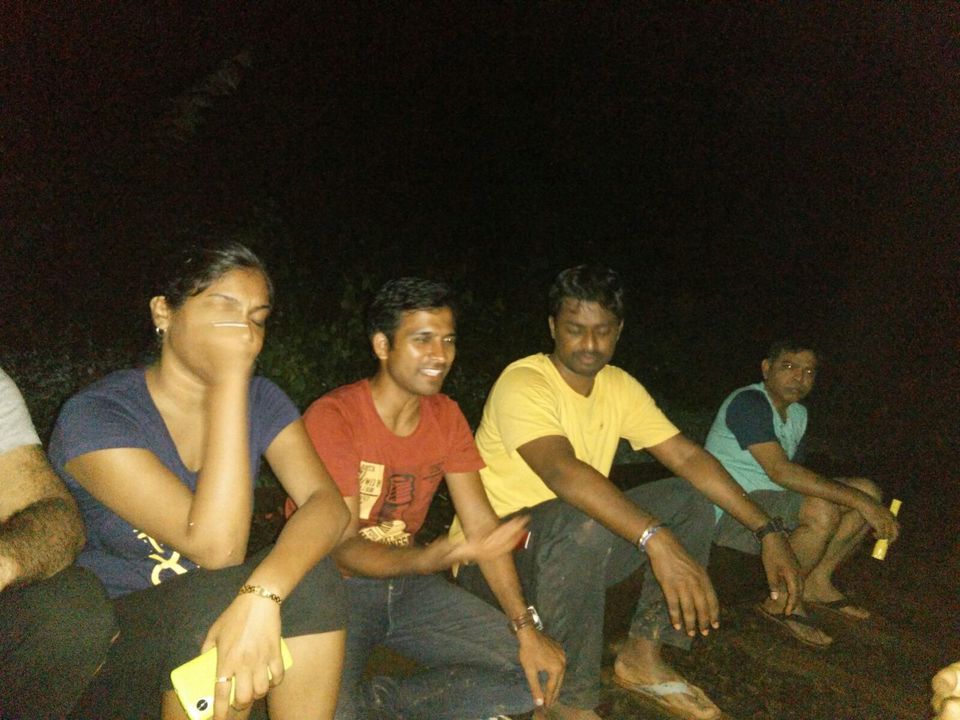 The time passed and at 3:00 AM we packed our tents and at 3:30 AM started our journey to the majestic waterfalls.

Started for the waterfalls trek at 3:30 AM 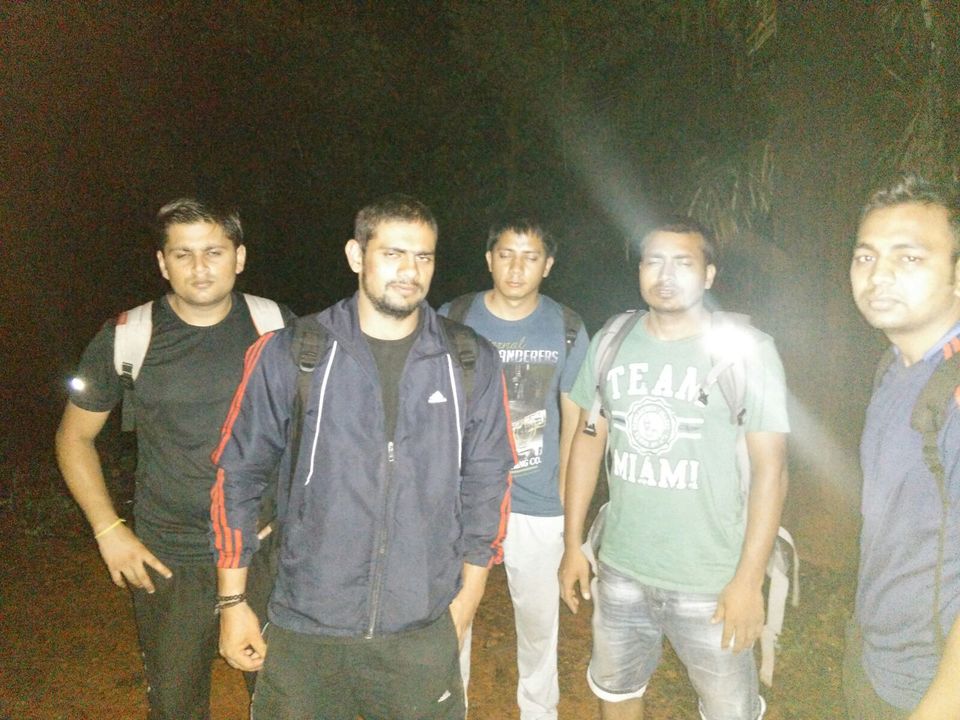 The path is on the train tracks and its completely dark. We heard the sound of train coming from the opposite side and every one got alert and shifted off the tracks and after train passed we are again on the tracks and started walking for around 40min, and we are in a tunnel and again we got the sound of a train, this time from the backside so again everyone were off from the tracks and sticked to the walls of tunnels and again started after the train crossed us. Our destination is still very far and everyone is exhausting and then it started to rain heavily and our bags were getting more and more weight as it is soaking in the rain. Atlast we reached at 6:00 AM to the waterfalls and we found almost 300 people were already present there for the to watch the waterfall & waiting for light to come. After few minutes the light has come up and we witnessed the beautiful waterfalls and the surroundings and spent time till 8:00AM and clicked few pics. 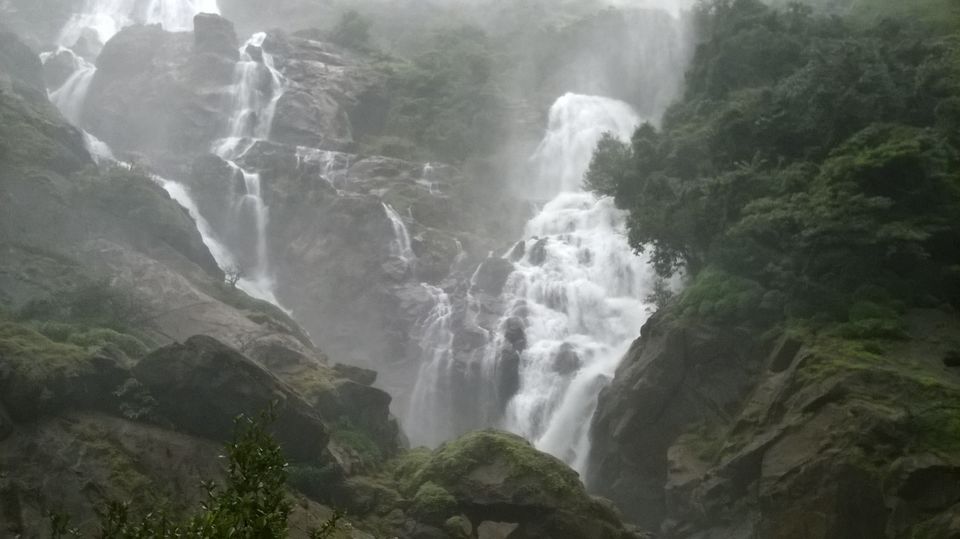 As the return to Sonaulim station is again a walk of 2hrs from there on tracks and we cant catch the train we if go there, so we started to Dudhsagar railway station which is 1Km from the waterfalls. 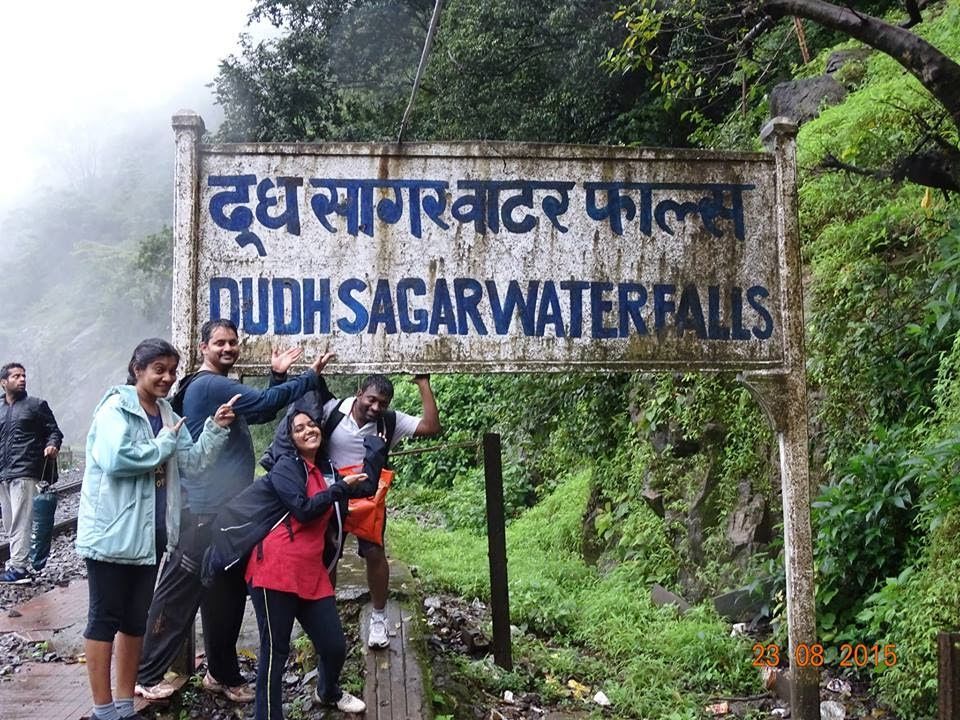 Here comes the another twist, we were caught by the RPF police at the Dudhsagar station and they told that trekking on railway tracks is prohibited and all of them will be punished for doing so and warned that no one will get into train once it reach the station. Then we heard the sound of train coming towards us and these men are still with us. Later we had to pay the fine of 1000/- for them and boarded the train at the Dudhsagar Station. After boarding the train everyone was doing the samething -sleeping. We were that tired after walking for that distance on the tracks and reached Guntakal at around 4:30PM. We had another 3 1/2 hrs time for another train to come. So we had our dinner there at the local hotels and returned the station by 7:30PM. At 8:00PM our train came (Tata Express) on the platform and reached Hyderabad on the next day morning.