Ever wondered what is deep inside earth’s core? There are passageways leading towards it,you know. Just Kidding!There are pretty deep holes on earth that will make the tallest building and even mount everest shy away from its length.

Nothing marks the presence of humans better than a massive hole in the ground. Boring deep into the Earth for the love of riches and resources, we humans dig deep and often. But there are some natural deep holes on earth too.

Chix on Board has enlisted some of the biggest holes found till date. Have a look fellow travelers :

Mir Mine, also called Mirny Mine, is the second largest excavated hole in the world. It is 525 meters (1,722 ft) deep and 1,200 meters (3,900 ft) wide. The hole is so big that even the airspace above the mine was closed to helicopters as there were several incidents of them being sucked in by the downward air flow. 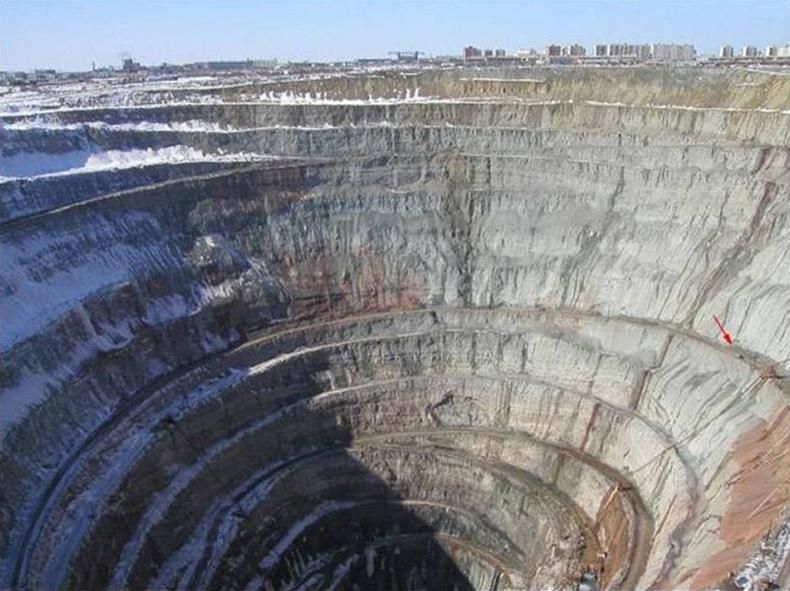 See that red arrow on the right about mid-way down? That’s pointing to a 220-ton hauling truck that’s over 20 feet tall! Just imagine how deep and big this hole is.

The Kola Superdeep Borehole  is the result of a scientific drilling project of the Soviet Union in the Pechengsky District, on the Kola Peninsula. The project attempted to drill as deep as possible into the Earth’s Crust. Drilling began on 24 May 1970 using the Uralmash-4E, and later the Uralmash-15000 series drilling rig. A number of boreholes were drilled by branching from a central hole. The deepest, SG-3, reached 12,262 metres (40,230 ft) in 1989 and still is the deepest artificial point on Earth. 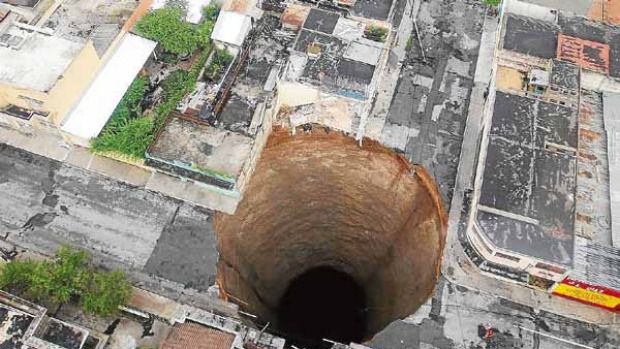 Unfortunately, the risk of sinkholes occurring in Guatemala City is high and unpredictable. The aftermath of sinkholes can be devastating to nearby residents.In 2007, a 100 metre (328 ft) sinkhole was formed due to sewage pipe ruptures. The devastating collapse caused five deaths and over a thousand people had to be evacuated in fear of the sinkhole getting bigger.Following the event, the hazards around the pipelines have since been mitigated and improved, but residents still had fears of further catastrophes.Three years later, in 2010, another sinkhole formed which was approximately 30 metres deep (100 ft). This one swallowing a three-story factory and killed at least 15 people. These disasters have seen the residents call for the government to inspect the sewer system more regularly. 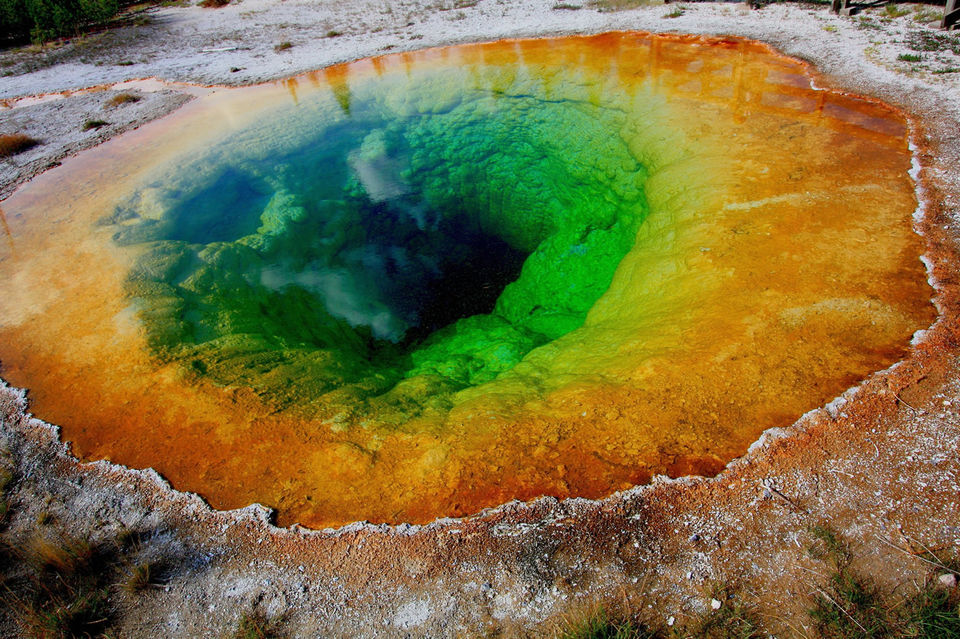 This is one of the most prominent and prettiest thermal pools in the Yellowstone park. The “Morning Glory Pool” was given its name in the 1880 for its resemblance to a morning glory flower. It is a hot spring pool that is colored by the heat loving algae that grow in it. However, this pool was once in danger of losing its colors when the Grand Loop Road used to pass close to it, which increased the likelihood of thoughtless visitors throwing coins into it – thus causing the pool to cool and jeopardize the existence of the color-causing bacteria that thrive within. Today, you’ll have to do a little walking along the Upper Geyser Basin to get to the pool, and it’s well worth the exercise. 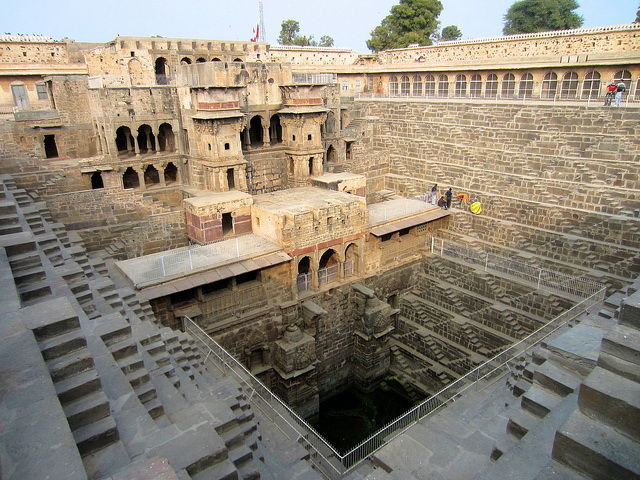 The Chand Baori is a stepwell built over a thousand years ago in the Abhaneri village of Rajasthan.It is one of the largest stepwells in the world and also one of the most beautiful ones.Chand Baori one was built during the 8th and 9th centuries and has 3,500 narrow steps arranged in perfect symmetry, which descend 20m to the bottom of the well.About 64 feet deep, it is India’s largest and deepest stepwells with 13 floors and was built in the 9th century for water harvesting.
It was so named as it was built by King Chand Raja from the Gujara Pratihara clan, who claim to be the descendant of Lord Ram’s brother Laxman. 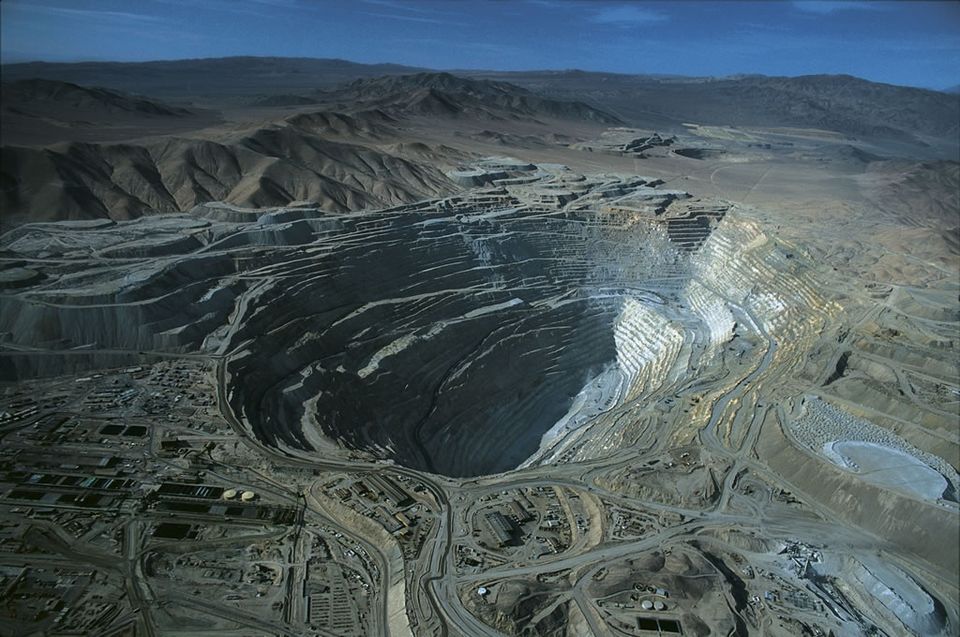 Chuquicamata, one of the largest open pit copper mines and the second deepest open-pit mine in the world, is located 1,650km north of Santiago, Chile. The mine, popularly known as Chuqui, has been operating since 1910.The new underground mine, scheduled begin operations in 2019, will comprise of four production levels, a 7.5km main access tunnel, five clean air injection ramps, and two air-extraction shafts..The tunnels will deepen the mine by nearly 787m by the end of production in 2060. The underground mine will be developed at an estimated cost of $4.2bn and will produce an estimated 140,000 tonnes of ore per day. It mine is expected to produce 366,000t of copper and 18,000t of fine molybdenum per year. 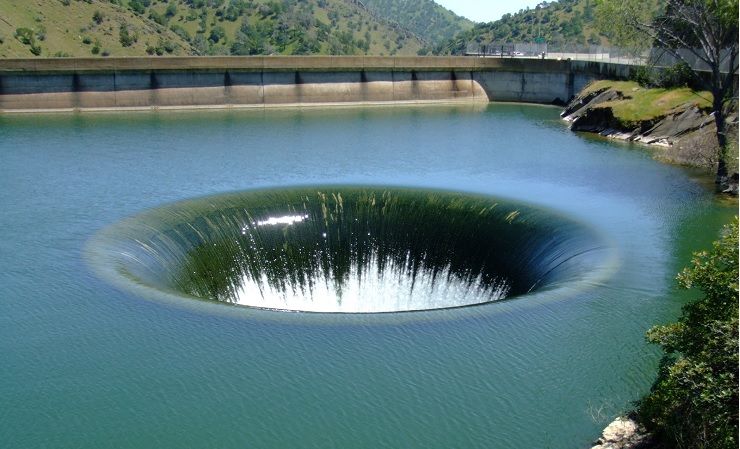 The Monticello Dam which creates Lake Berryessa is currently the 7th largest man-made lake in all of California, USA. While the dam in itself is impressive and a sight for sore eyes, the Monticello Dam is most famous for it’s spillway (also known locally as “The Glory Hole”).Acting like an overflow channel on a kitchen or bathroom sink, this uncontrollable spillway has a diameter of 22 metres (72 ft). During the time when the lake is at it’s peak capacity, the spillway can drain up to 48,400 cubic feet per second.Due to the sheer force of water that is funnelled through this hole, swimming near the hole is strictly prohibited.During the dry months, the exit of the spillway is a well known skateboarding hot spot and is used as a full-pipe. 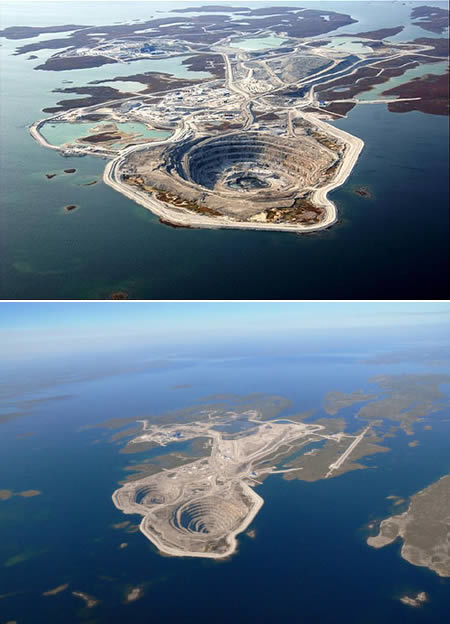 The Diavik Diamond Mine is about 300 kilometers (186 miles) north of Yellowknife in Canada. It produces 8 million carats (3,500 lb) of diamonds annually. The mine is so huge and the area so remote that it even has its own airport with a runway large enough to accommodate a boeing 737. 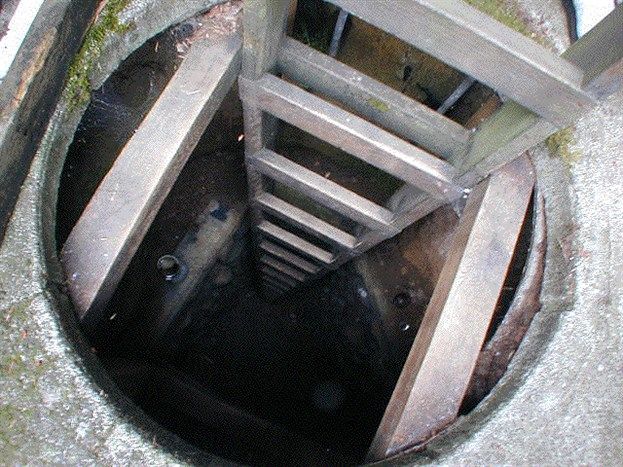 Without being certain of who dug the Woodstock Mystery Hole, it is virtually impossible to determine how it was created. The absence of pick and shovel marks points to crude methods by a primitive people. However, this is given by some researchers as evidence of extraterrestrial activity. Indeed, marks not unlike laser-blasting are clearly visible on the walls of this gaping cavern, adding fuel to the fires of debate. Most experts and theorists do agree on one thing—it was not created by natural forces.The Mystery Hole goes all the way to the bottom. The depth of the Woodstock Mystery Hole has never been accurately determined by modern scientific methods, and estimates vary greatly, but the over-all consensus is that it is very deep.