Following The Road In Oregon, USA

Crater Lake has to be one of the most beautiful lakes I’ve ever seen, it’s absolutely awe-inspiring. Located in southern Oregon, Crater Lake is the deepest lake in the United Sates at nearly 2000 feet. Interestingly, there are no rivers flowing into or out of the lake, which is probably a contributing factor for it’s brilliant blue color and clarity. I visited Crater Lake National Park during a beautiful Fall day, but after seeing pictures of the area covered in snow, I cannot wait to go in the winter someday…it’s a place of immeasurable beauty. Fees: $10 for car and $5 for motorcycle (7 day pass) 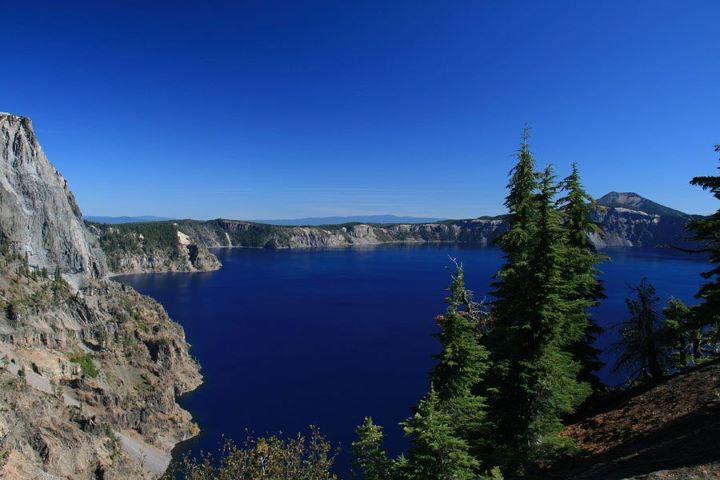 While I was visiting Jacksonville, Oregon, I was told by several of the locals that I should check out the “cemetery.” The first time I heard this I thought “a cemetery…what kind of tourist attraction is that?” After hearing the cemetery endorsement a couple more times, I figured I should saunter up the hill above town to see what all the fuss was about. As soon as I reached the top of the hill, the entrance to the historic cemetery, you could tell it was no ordinary resting place. First, the thirty acre cemetery was segmented into religious and fraternal clusters…denominations include: Jewish, Masonic, Catholic and Independent just to name a few. The largest section is the “City,” and within this cluster you’ll find a “Potter’s Field,” which is where they buried, Native Americans, Hawaiians, Chinese, African Americans and others who were probably considered “less desirable” at the time. The first burial took place in 1859, with many of the gravestones being quite opulent and ornate. As you walk the cemetery grounds you may notice a few headstones that date earlier than 1859, those were from remains that were removed from other locations and reburied in the Jacksonville Cemetery. Many of the pioneers buried in the cemetery are quite familiar today as they bear the names of streets and area communities. Others are recognized on historic homes or businesses, such as the McCully House, which is where I stayed. The Jacksonville Historic Cemetery remains an active cemetery and is still very much a part of the city as it was back in the mid 19th century. The cemetery is registered as part of Jacksonville’s National Historic District status, as well as with the Oregon Commission on Historic Cemeteries. 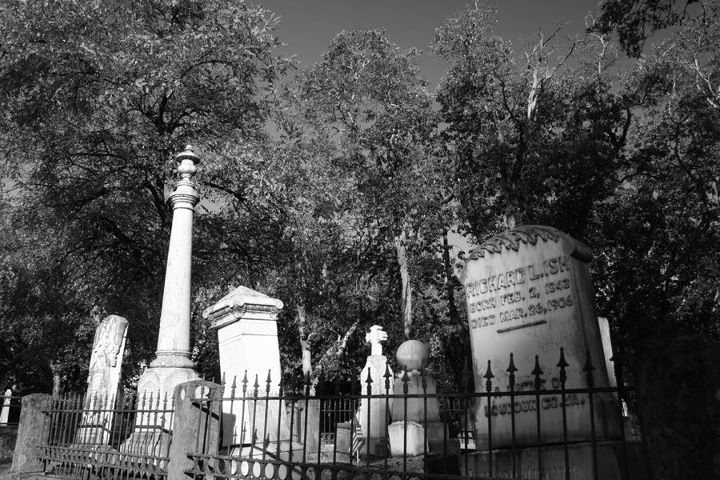 HillCrest Vineyard is Oregon’s oldest winery and was the states first to product a Pinot Noir…which is now synonymous. The Umpqua Valley (Roseburg area) has become known as “the undiscovered wine region,” but I suspect with the quality wines being produced, that it won’t stay that way much longer. During my time at the vineyard, Dyson was kind enough to take us into the heart of the operation…there we got to see how the wine is crafted, stored, aged to perfection, and then bottled and labeled. I’m always excited to learn how things are produced, and to get this level of personalized attention was a fun and unique experience.The DeMara family does not sell their wine in stores, it’s only available at the vineyard in their tasting room. And, they only produce around 1400 cases annually, so getting to taste it is certainly a treat. If you visit the Roseburg area, be sure to check out the Thundering Waters Inn for your lodging needs…they serve up scrumptious appetizers paired perfectly with local wines, often from HillCrest Winery. If you’re in the Umpqua Valley area (Roseburg) and enjoy wine…do yourself a favor and stop by HillCrest Vineyard for a truly enjoyable, educational and personal wine tasting experience. The tasting room is charming with its history and accolades adorning the walls. If you’re lucky, you might even get a glimpse of the first bottle of Pinot Noir ever produced in the state. 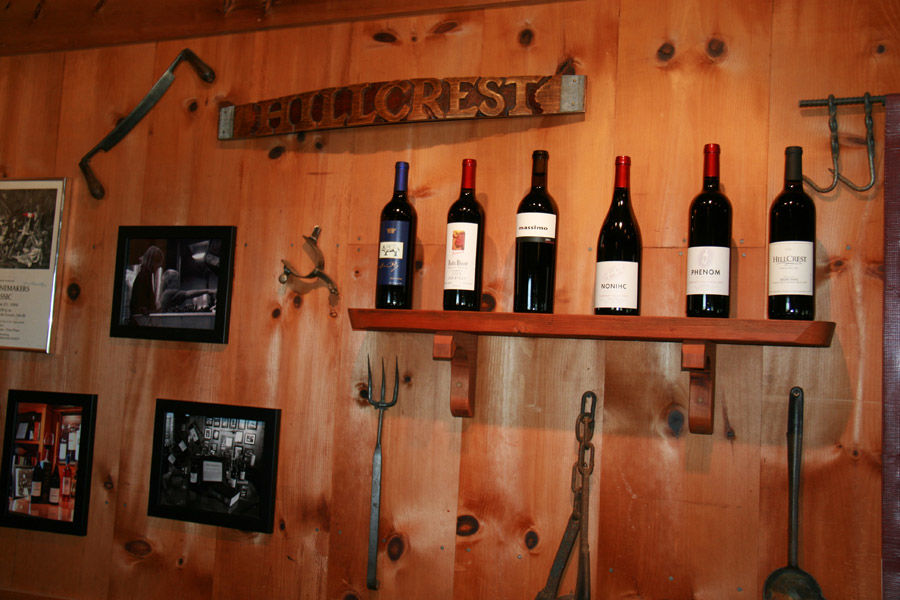 I was traveling along the beautifully historic Columbia River Highway, when all of a sudden I began to see an array of vintage automobiles traveling toward me. Seeing a great opportunity to capture some unique video along a spectacular and historic stretch of highway, enticed me out of my truck. While I was setting-up, I noticed some activity that made me realize this was an organized event of sorts. I spoke with some representatives and learned that it was an annual rally with the folks from the Horseless Carriage Club of America (HCCA). Decked out in period garb to coincide with their vintage automobiles, the rally participates were treated to a beautiful stretch of highway, with a number of waterfalls on one side, and the Columbia River on the other. My understanding is that HCCA conducts an annual rally, each year in a different location. The last time it was in the Portland area was some 26 years ago. Horseless Carriage Club of America (HCCA).The Horseless Carriage Club of America is a non-profit organization for automobile antiquarians dedicated to preserving vintage automobiles. Prerequisite to becoming a member is owning a restored 1932 or older historic automobile. 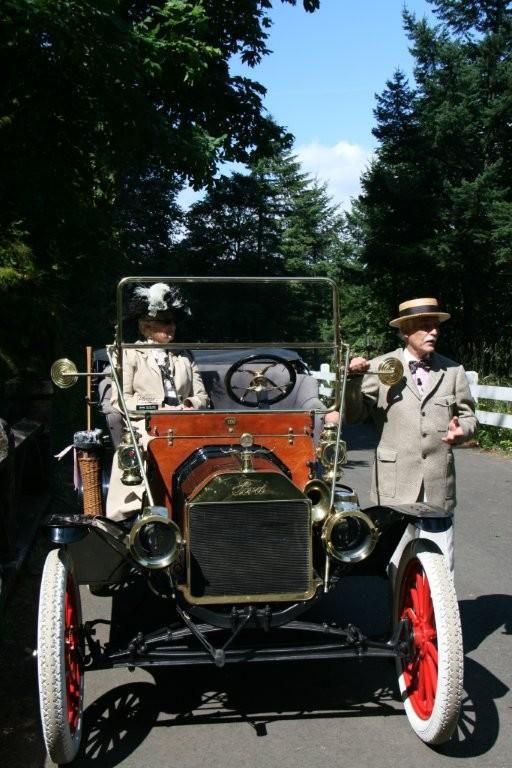 I found Port Orford, Oregon to be one of those preverbal, “diamond in the rough” destinations. One does not typically expect such wonderful amenities from a smaller town, but this southern coastal community is not only worth a stop, it’s worth a stay. With a vibrant art scene hosting over a dozen galleries, a number of quality restaurants and some outstanding accommodations, Port Orford would make any discerning traveler feel comfortable, and might I add…at home. Small in stature (only a few square miles), but unexpectedly authentic and rich in character, Port Orford presents mountainous forests uniting with rugged coastline. The Natural beauty will beckon your sense of discovery, you’ll find all kinds of nooks and crannies as you roam unbeaten paths. The sense of isolation with quality amenities is the perfect blend for those who desire a slower pace, coupled with tranquility. The Port of Port Orford is located in the heart of town—you’re actually able to drive down and park, which allows you to enjoy the views and the waves crashing against the jetty. This natural harbor has one of only two “dolly docks” in the U.S., where boats are lifted in and out of the water by huge cranes. Port Orford is a working fishing port and home to nearly thirty commercial vessels. There is a small restaurant, seafood processing plant and gift shop to visit as well. 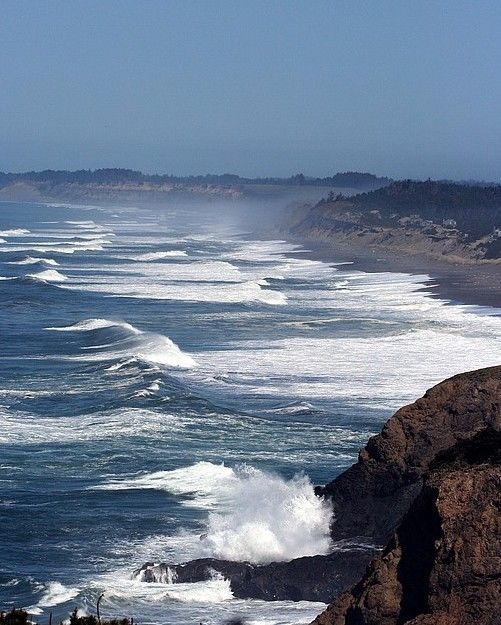 RedFish is a contemporary, first-class restaurant serving up northwest coastal cuisine, with a distinctly French flair. The views from RedFish are absolutely stunning (which pleasantly equal that of the cuisine), right in front of Battle Rock. 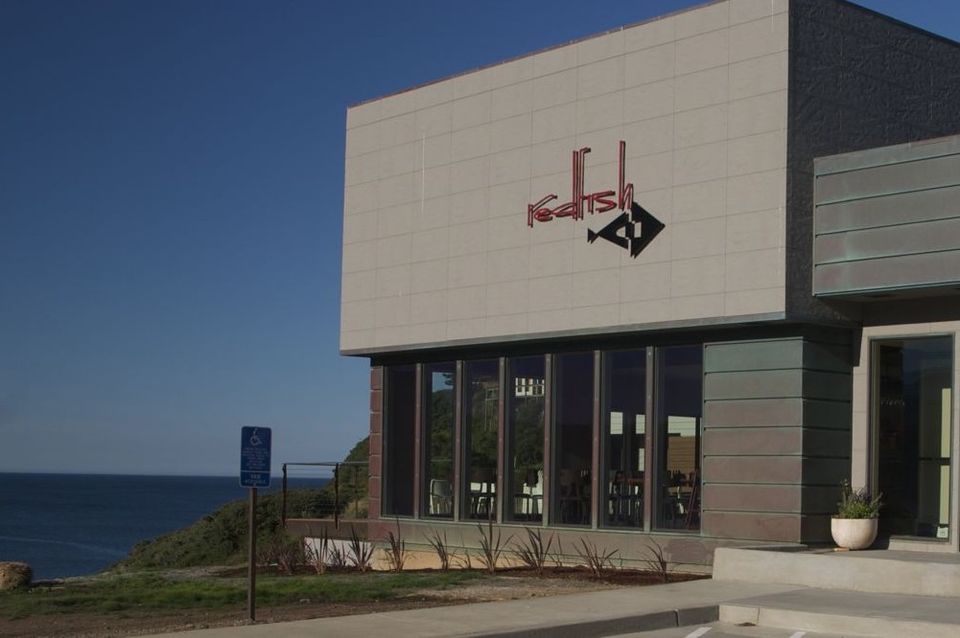 From the moment you arrive at WildSpring Guest Habitat, you get a distinct sense that this place is unlike anything you’ve experienced before. As you enter the cabin suite area, a sense of well-being and relaxation wash over you like a gentle breeze, relieving you of life’s stress and worries. After you get settled and take in the luxuriousness of the accommodations, excitement to survey the grounds overwhelms you. You’ll find five acres of wonderment high above the Port Orford, Oregon coastline to explore. The property has so many dimensions that every day you’re there, it’s like a new sagacity of discovery. Various textures, paths, meditation areas and artwork will incite and entice your every sense.The cabin accommodations are nestled among soaring trees, each with a buffer from the next, providing the ultimate in privacy for solitude and/or romance. Each cabin is distinctly furnished in a modern and plush manner with the work of local artists adorning the walls. There are overstuffed love-seats with chenille throws for warmth. The pillow-top beds are extremely comfortable and the down comforter makes sleeping quite cozy. Accommodations come with a refrigerator, a massage table, an iPod compatible stereo (which I love!) and an LCD TV with DVD player. However, there is no broadcast or cable reception—never fear though, there is an extensive DVD library in the guest hall. 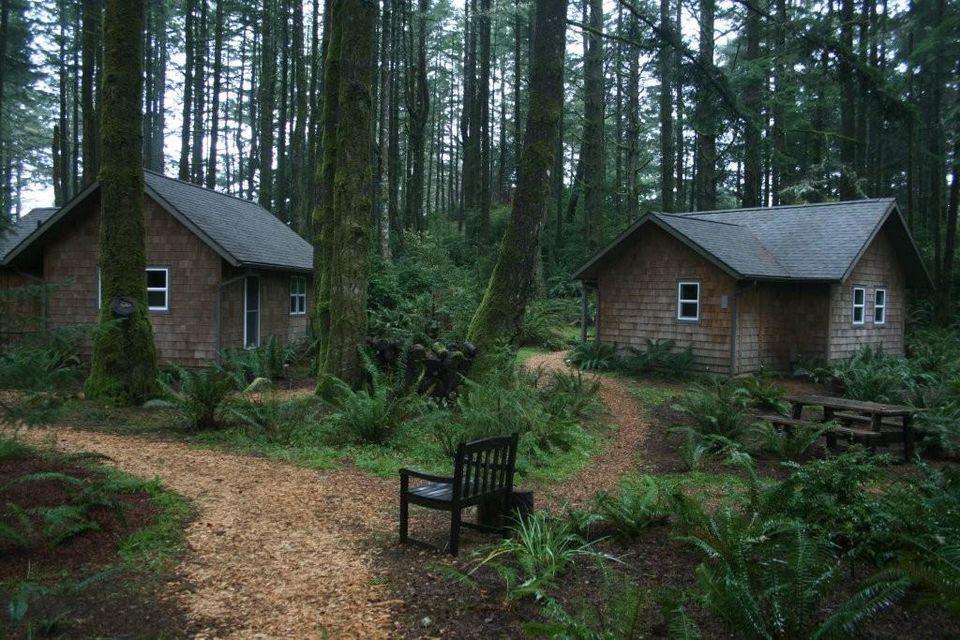 One of the most trendy, coveted, coastal communities in the state of Oregon is Cannon Beach. The scenic beauty of the rock cropping monoliths on-and-offshore, including the famed “Haystack” rock, will make your beach strolls and photographs unlike none other. Cannon Beach is nine miles wide and has the most pristine beach I’ve ever seen…in many areas, not even a sign of sea debris—just miles of smooth sandy beach…with the occasional dune. You can fly a kite, watch sea creatures in the tide-pools or just relax on the beach.Cannon Beach was named for a cannon that was discovered on the beach from an old Navy schooner that wrecked while attempting to leave the Columbia River in the mid 1800s. However, the first recordings of the area date as far back as 1806 when William Clark, of the Lewis and Clark expedition set foot. As a matter of fact, there is a viewpoint called “Clark’s Point” which can be accessed by hiking a trail from Indian Beach in the Ecola State Park. There is a vibrant art scene in Cannon Beach, with a number of wonderful galleries and culinary choices. And, the city is certainly setup for strolling; visitors will enjoy the quaint bookstores, shops and bistros. For hikers, there are many trails to the water through the thick conifer forests of Ecola State Park. Ecola Point, near Ecola State Park, has a viewpoint and picnic area where you can see the panorama of Cannon Beach, Haystack Rock and the coastal range. This spectacular view is one of the most photographed on the Oregon coast. A two mile trail connects Ecola Point to the horseshoe-shaped Indian Beach, and a six mile trail leads to Tillamook Head (and yes, “Tillamook” is the name of the well known cheese…the factory is about an hour south of Cannon Beach). 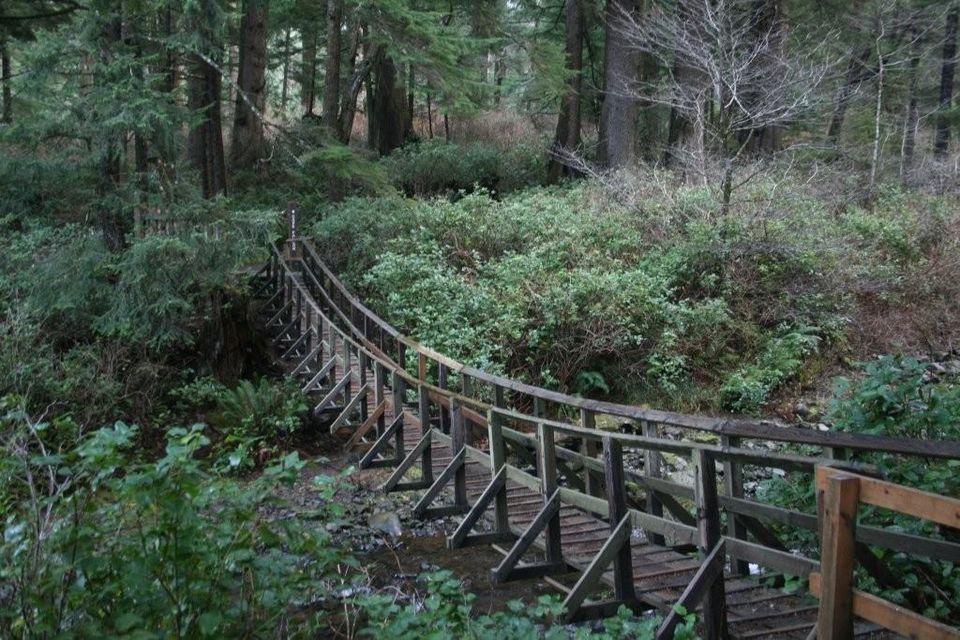 The first thing I noticed when I arrived at The Ocean Lodge in Cannon Beach, OR (besides the obvious beach-side proximity) was the inviting fragrant scent of wood burning in a large stone fireplace located in the lobby—nothing like the affection of a real-wood fireplace. The next thing I noticed were the wonderfully distressed spruce hardwood floors and the finished structural wood beams…really makes you feel like you’re in a true, ol’ style “Beach Lodge.” It’s not really until you get to your room and look out the balcony windows that you are taken aback by the unbelievable view (as was in my case, not all rooms have ocean views). What makes this ocean view different than others you may have born witness too, is the nonstop flood of waves—not just one after another, but almost one on top of another. And then, there are the large “haystack” monument rock formations that pepper the shallow waters just off the beach that make for an unusual and breathtaking view. Cannon Beach has some of the most pristine and expansive sandy beaches you’ll come across. I also noticed the welcomingly odd void of any sort of sea debris…it’s just mocha smooth sand. The rooms at The Ocean Lodge are comfortable with amenities that include a gas fireplace, whirlpool tub, lots of DVDs, small kitchenette (fridge, microwave, utensils and a coffee pot) and bathrobes, or housecoats as my Canadian friend likes to call them. While the rooms are nice, I was a bit surprised by the use of modest/common building materials (in the rooms themselves), as the common areas are more luxurious—perhaps that was by design to add to the casual atmosphere. 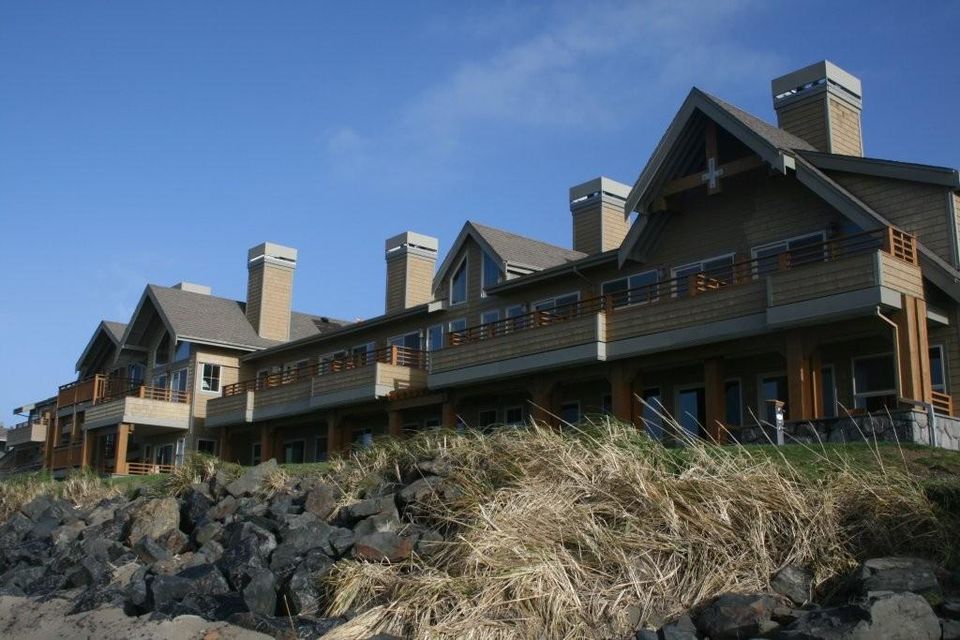