Snorkelling Between Two Slices of the Earth : Silfra in Iceland

Snorkelling in between Continents- The Silfra Experience! 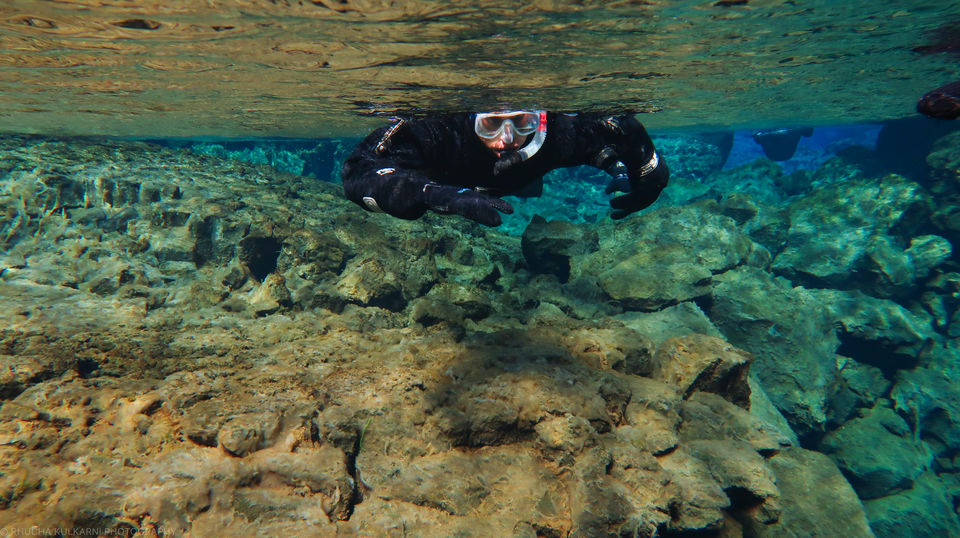 Iceland - A natural wonder brought back from oblivion, thanks to its opening up to mainstream tourism in the recent times. It was to be the ultimate experience for me as a nature lover. For the peculiar geological, geographical and climatic conditions of this island-country are like no other on Earth! As we caught a glimpse of the black, rugged landscapes just before we landed, my heart raced in anticipation of nature’s bounty being unfurled before my eyes. The first day was spent preparing for the Great Adventure; stocking up on food reserves as we would hit the road by self-drive, the very next day !

Nourished by the bubbling waters of the river Öxará, Þingvellir National Park, located in South Iceland, has played a monumental role in Iceland’s history. Literally translated as "Assembly Plains", it has been the prime convention spot for Iceland’s Alping general assemblies. But what truly sets it apart today, from this historical significance, is the geological uniqueness that it embodies. A part of a fissure zone that runs through Iceland, it is a live specimen of upheavals of the Earth’s crust. Much natural drama has unfolded on this landscape, and continues to do so.

This is owing to the presence of the Mid-Atlantic Ridge, which serves as a natural divide between the North American and the Eurasian Tectonic Plates, and the South American and African Continental plates. Scientific studies indicate that, every year the tectonic plates drift apart by around 2 cm, leading to geological stressors, and therein earthquakes and volcanic eruptions.

It was one such land-tyranny, which was responsible for one of the most amazing underwater phenomenon of Mother Earth. The earthquakes of 1789 made the earth twist and turn, opening up several fissures! Silfra was no exception, other than the fact that it cut into the underground spring fed by the glacial melt-water from the nearby Langjökull glacier. This is what creates, what is perhaps the purest water on Earth! The pristine feed of water, filters through 50 km, and over several hundred years through layers of lava-rock from the volcano Skjáldbreiður, and reaches Þingvallavatn Lake! This epic journey of a mere water rivulet made for a pristine world of pure deep blue, down below, to elicit human awe even today!

Rarely can any water-sports bestow upon you an enchanting mix of adrenaline and a dunk into utter peace and serenity. Take your pick from scuba diving (you need to have completed specific certifications to qualify for diving here), or snorkelling to experience the Uncertain Earth up, close and personal! I chose to snorkel, and mind you, my heart was already in flutters when I got to know the water temperature - a chilling 2-4 degrees Celsius!

Thank God for small mercies, for this is dry-suit diving. So I was packed and sealed to the hilt by the diving instructor! Flippers in hand, we trudged, not unlike makeshift penguins, to the diving entrance. As I approached, my heart thumped at what I was about to do - jump into a crack in the Earth, quite literally! Snorkelling masks on, we looked like a bunch of crazy aliens, doing an even crazier thing! A few steps downwards to heaven, rather than upwards, and before we knew it, we floated in our dry suits! Eager to not miss out I plunged my face in, the cold water tingling my lips which was thankfully the only part of my skin that was exposed! And in that moment, everything else stopped existing.

Till as far as the eye could see, I behold a riveting deep blue. Not a soul-stirred, except for some occasional fresh water plants scattered far apart. So devoid is the water of organic matter, nutrients and debris, that little life can sustain on the formula of pure H2O! This is what allows visibility of up to 100 metres, making Silfra a snorkeler’s and diver’s haven. I had to actually see it to believe it. Vast panoramas of blue, brown, grey and myriad colours as the tectonic plates led to weird-looking formations. The gentle current of the spring propelled me along, as if encouraging me to go all out and experience it all!

Silfra is not to be merely seen, it is to be taken in, through each of your senses. I gulped in a mouthful of the clear, cold water, and was instantly refreshed as if a boost of energy-rich oxygen had kick-started my brain! I reached out on either side and lo! I was touching Eurasia, and America, all at once what a feeling of aplomb! We glided effortlessly towards the catchment area of the Þingvallavatn Lake, and the silence transported me to a meditative state.

As I emerged from the wet vistas, my lips were numb, but my mind abuzz with wondrous emotion! This was the ONLY place where humans could dive between two continents, and I had witnessed this marvel first hand! I fall short of words trying to describe what I took away with me, after a dip in the purest of the pure, sublime waters of Silfra!

Have you had an experience as enthralling as mine? Tell me all about it in the comments below!