A Jug full of Experiences 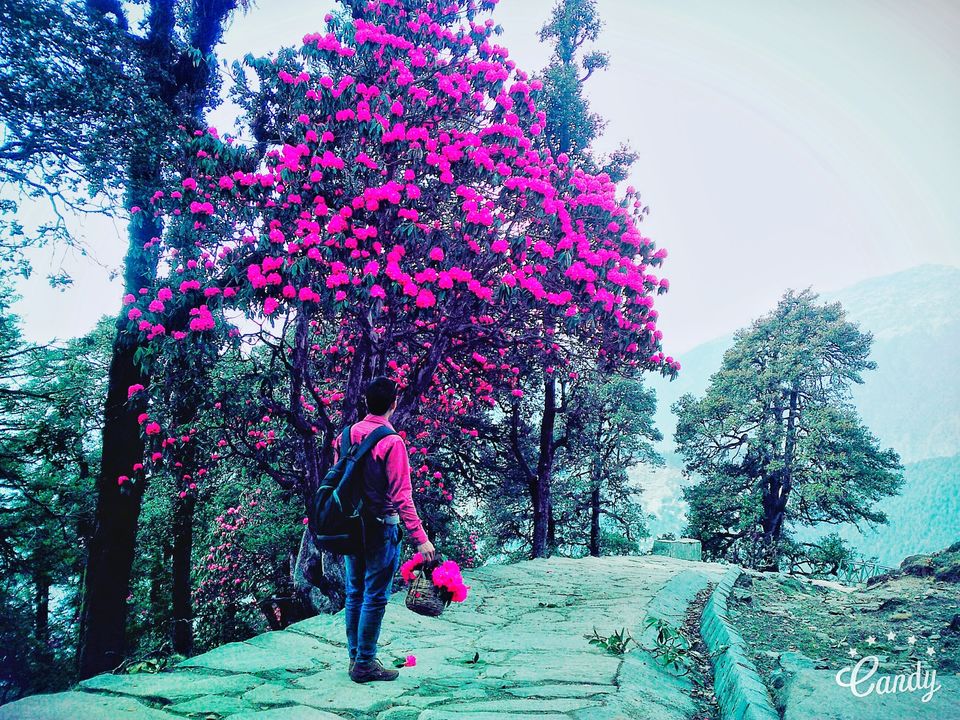 Namaste! I am Jugmohan Singh Pundir from Chamba,Uttrakhand. I am currently working in Ashok Leyland Company from last 7 years but inside me is a hidden traveller that loves nature, adventure, trekking and  photography. Whenever I have time off from office,along with a group of friends I  plan some adventurous trek. 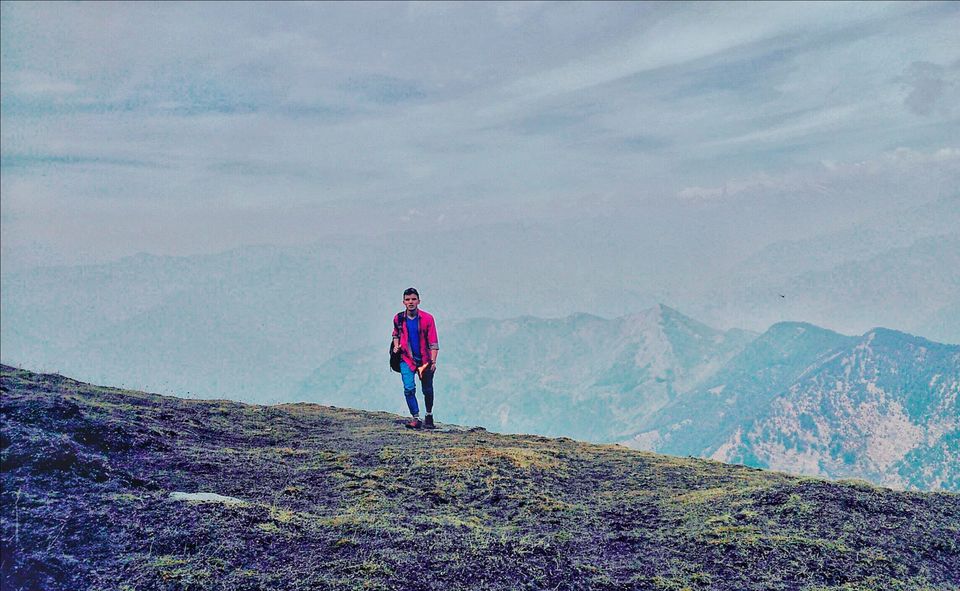 Chandrashila is summit of the Tungnath. It literally means “Moon Rock”. The meeting place of man and mountain. It is located at a height of about 4,000 meters (13,000 ft.) above sea level. This peak provides a spectacular view of Himalayas, especially Nandadevi, Trisul, Kedar Peak, Bandarpunchand Chaukhamba peaks.
The Beauty of Chandrashila is Incredible. It is an impressive vantage point that offers 360 degrees panoramic views of the mighty Himalayas.
The trek to the peak is 5 km. The trek route that starts from Chopta takes one to Tungnath (highest Shiva temple in the World), from here it is a kilometer long, and a steep trek. Chandrashila peak which offers a 370-degree view of snow-capped mountains like Nanda Devi, Indias highest peak. 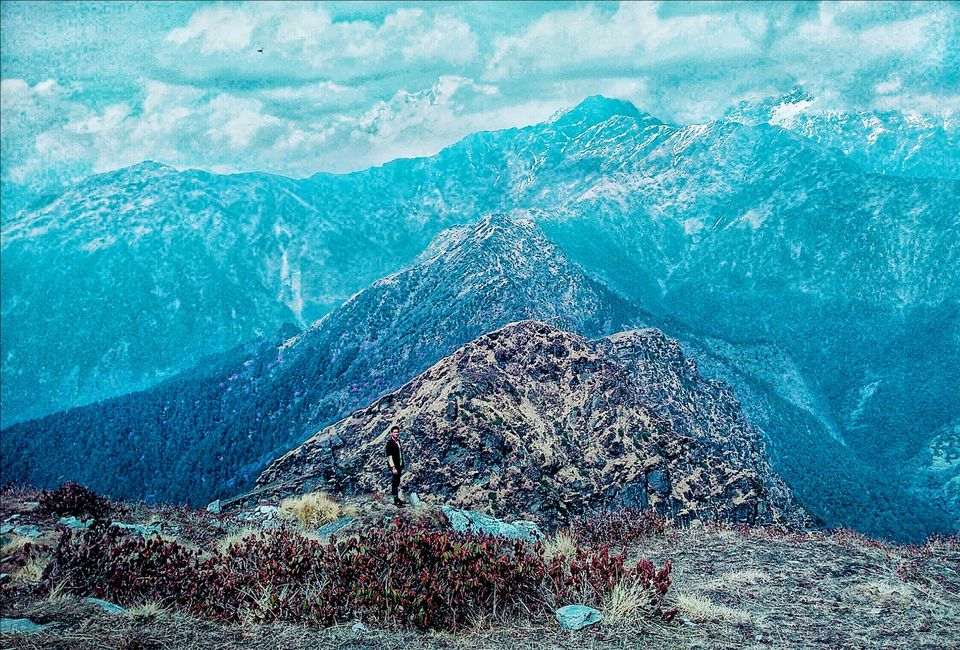 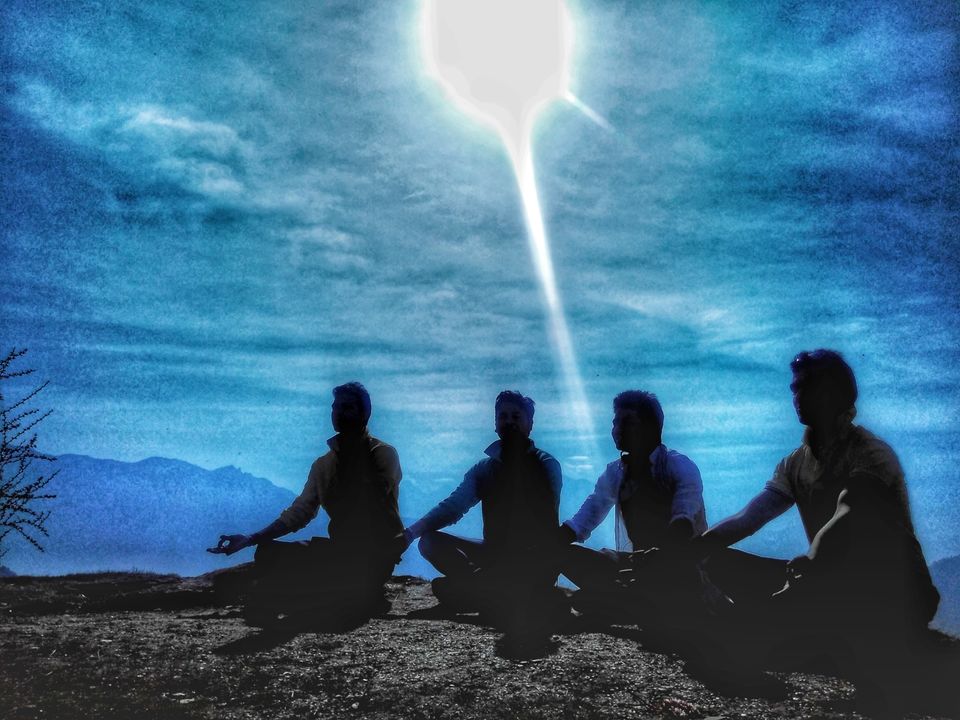 In March 2016, I decided to explore the myriad of  trekking opportunities in Uttrakhand with my friends. It was a random plan to move out to the heart of mountains for some days, taking a break from pollution and those stagnant coinages. A group of 6 friends from Ashok Leyland ,including me planned to  for go for this trek.

Being in Haldwani, the best route for  Tungnath Chandrashila  was by Chaukhutiya – Karnprayag – Gopeshwar and then Chopta.
Among us 1 friend had his hometown in Gopeshwar and, as such was a regular wayfarer to Tungnath. He guided us for the route and then finally we left by a press vehicle around 12-1 am at night from haldwani.

We reached Chaukhutiya at around 5 in the morning, where  we got ourselves a bus to Karnaprayag and we finally reached at Gopeshwar at around 11 am. After a refreshing breakfast  we decided to make it  a rest  day and commence for  Chopta next morning. So for today we visited local sightseeing spots like the Gopinath temple, the Eco Park and the Gopeshwar market. We then booked a SUV for the next day, and called it a night.

On the trek day, we got up early, and started riding at 6 am. The route to Chopta was mesmerizing beyond words. Breaths of fresh air and the sights out of the window of mighty mountains truely rejuvinates one. Throughout the way we were busy with our photo session, trying to catch all we can as memories for a lifetime. We reached Chopta at 9 and embarked on the trek.

The trek to Tungnath passes through dense rhododendron forests  with magnificent views of mountains peaks. The initial 1-2 kilometers of the trek are fairly easy, with picturesque and magnificent red and white rhododendron flowers. The last few kilometers are particularly strenuous, as the trek has a continuous ascent. In this trek you become one with the nature. The pleasure of watching these hills and the greenery they had was beyond any materialistic pleasures. On our way up we found snow, which was unexpected, but totally welcomed and enjoyed by us. We took around two hours to reach the Tungnath temple.

After relaxing for some time  we visited temple and around the temple we saw many ancient art work which were amazing . After having some light food, we continued to trek ahead towards Chandrashila. We feel relaxed when we reached  Chandrashila which was followed by  we masti and a mandatory photo shoot.
We trudged back;our mission was accomplished — we were in heaven for a day. I could literally see the mountain peaks waving goodbye from behind the clouds.We saw a clear blue sky and got some shining views of Chandrashila
We were enjoying with snow and never realized the chilling temperature. The temperature kept on dipping and the snow winds threatened.

On our way back we did dance at  the top of the mountain that was the most memorable moment for me.
When we were coming back we found a bucket (tokri) that we filled with flowers. We followed the same trail from Chandrashila and came back to Chopta, putting an end to a mesmerizing trek. 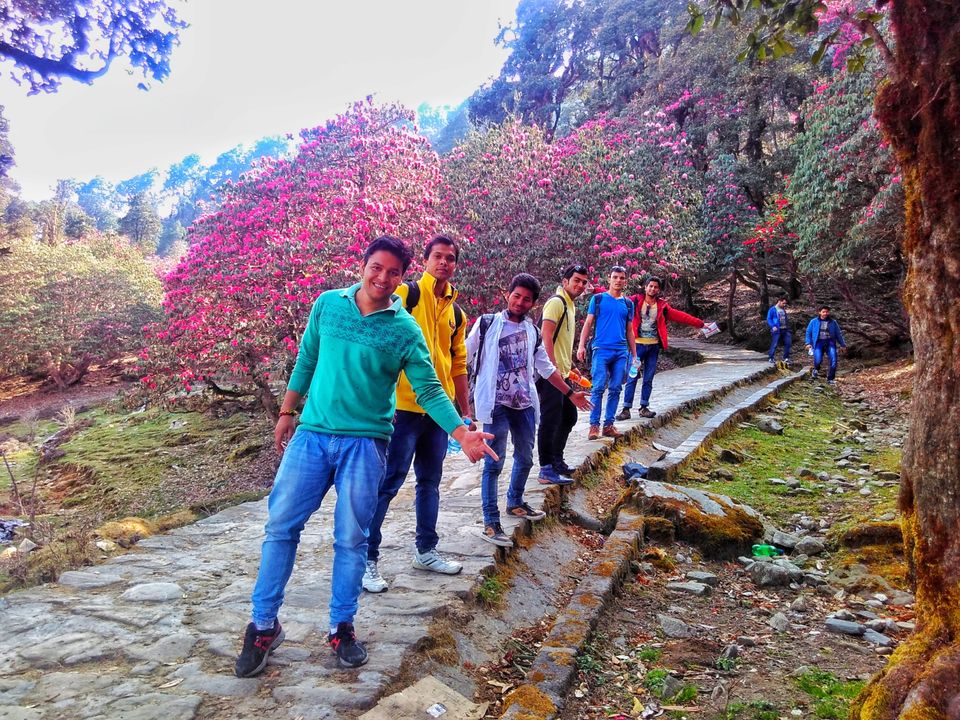 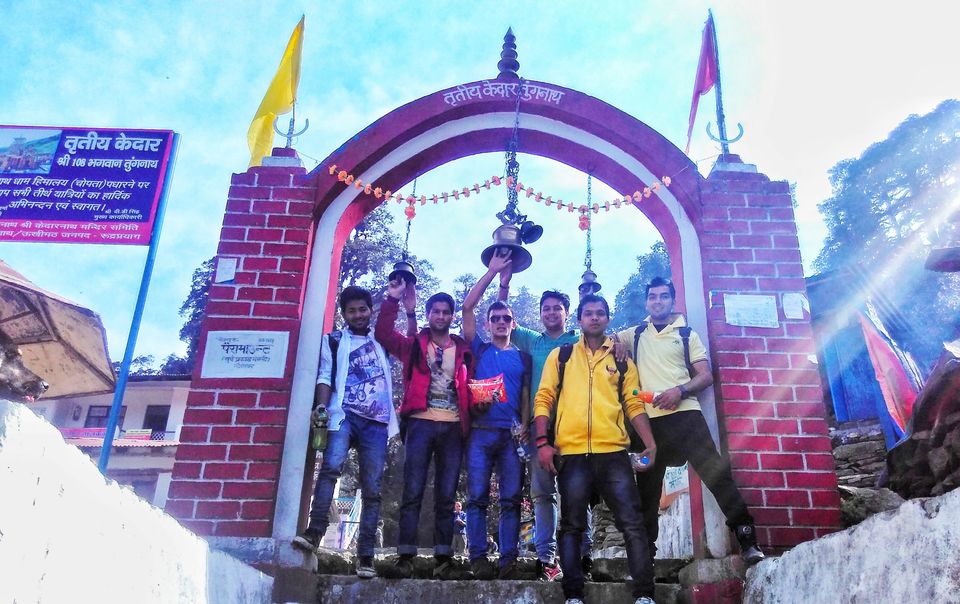 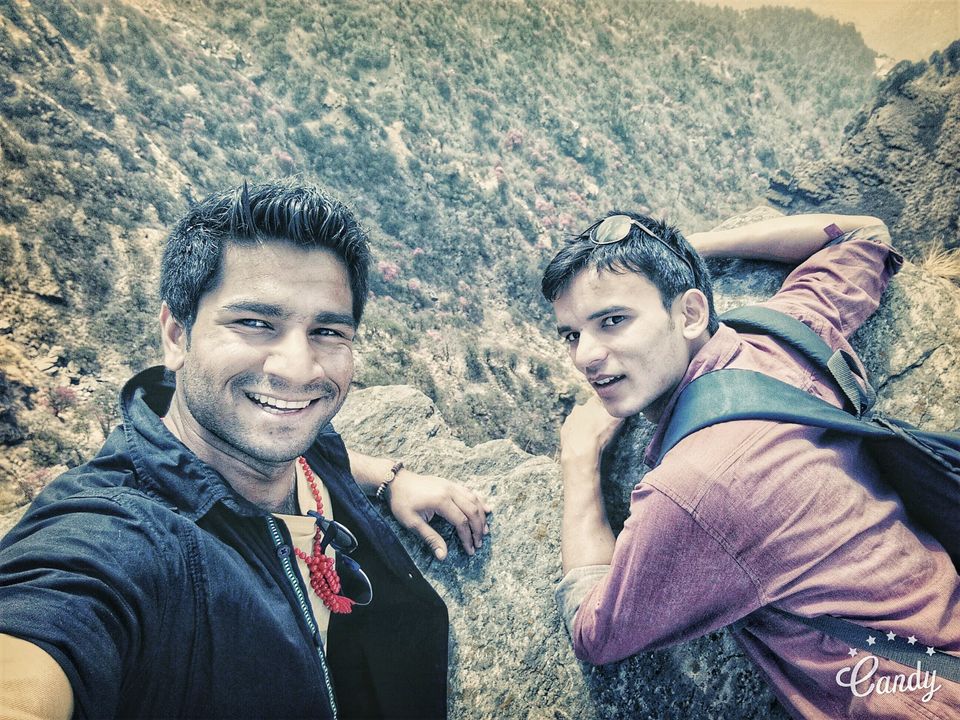 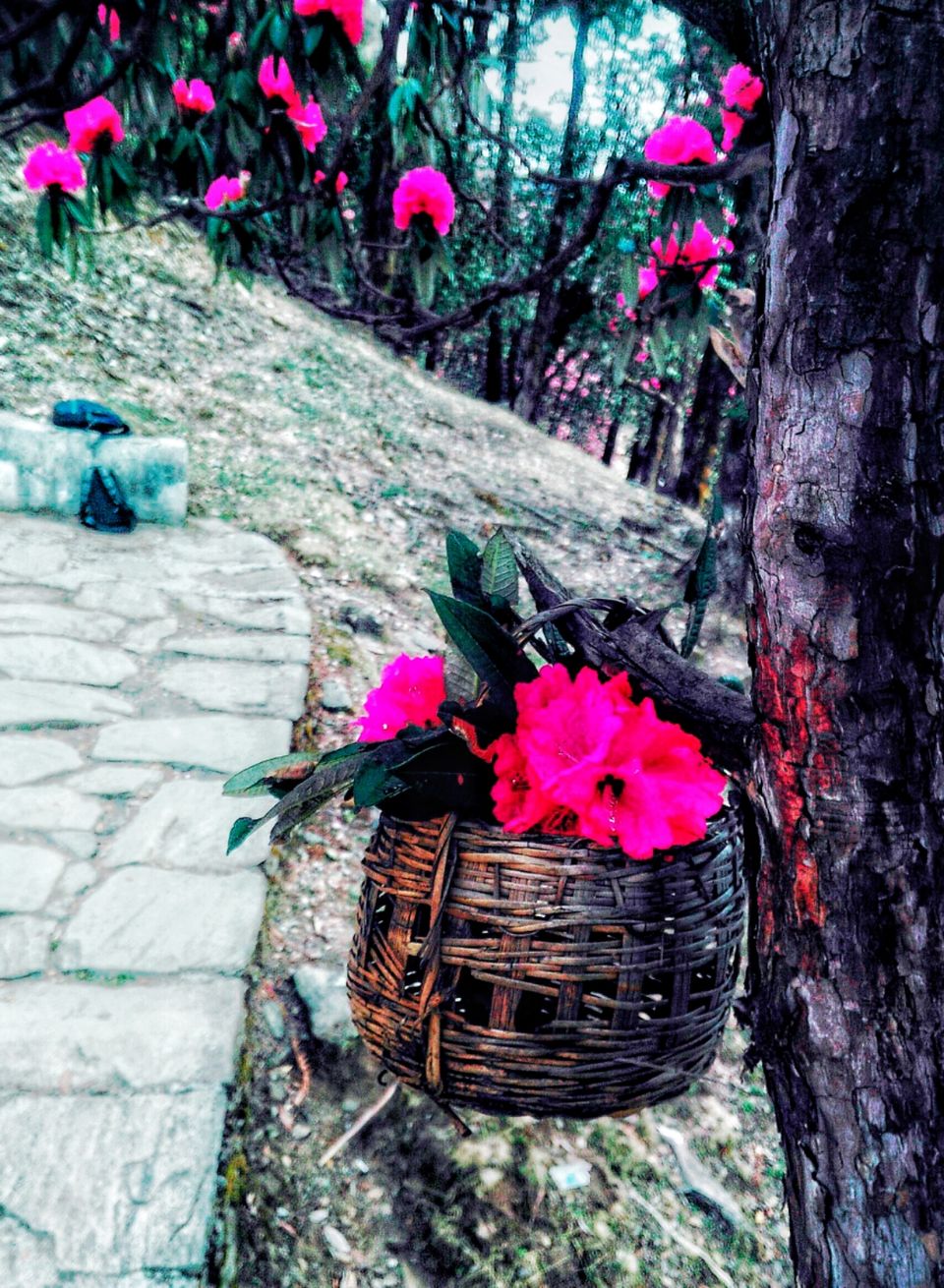 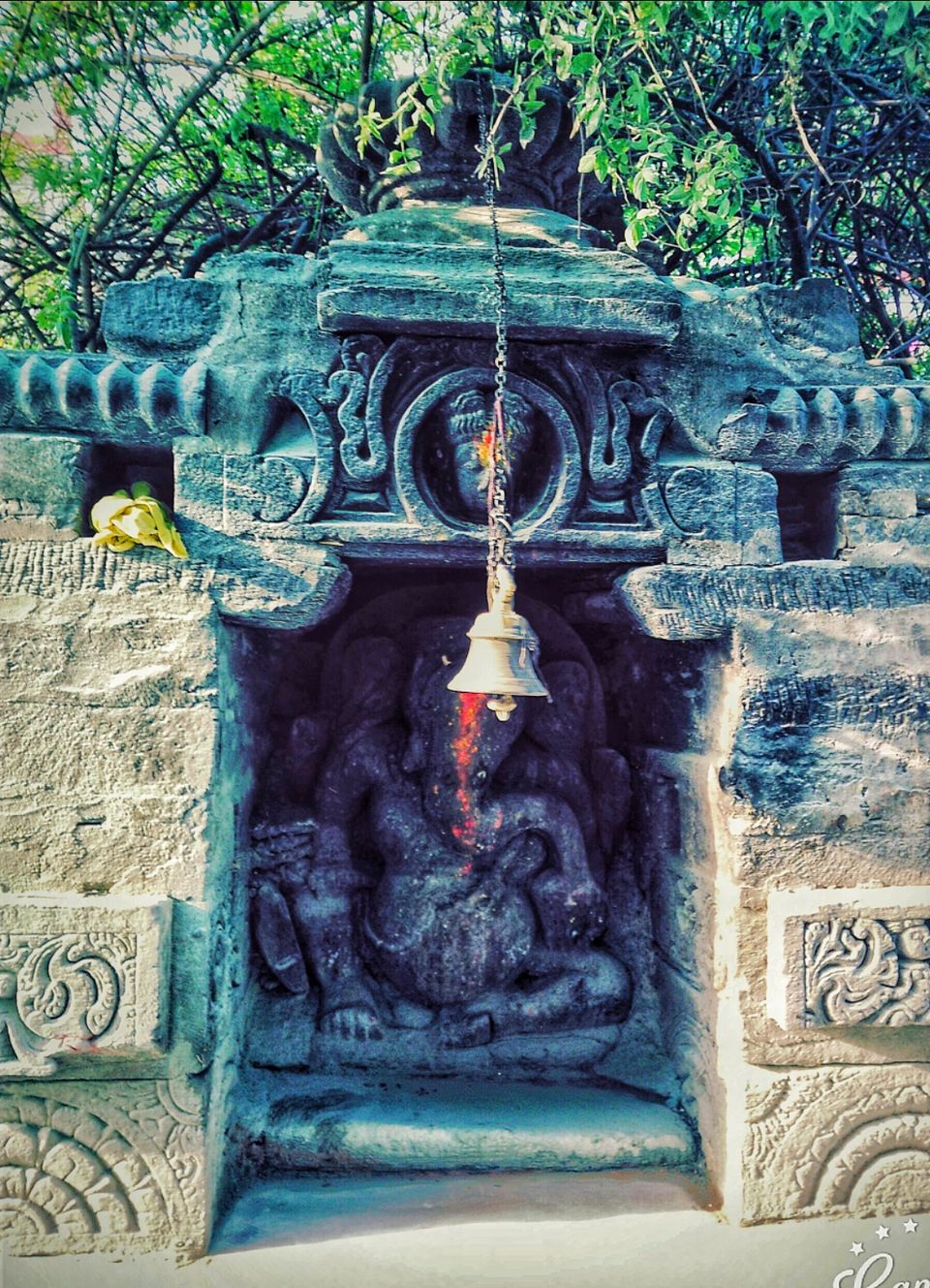