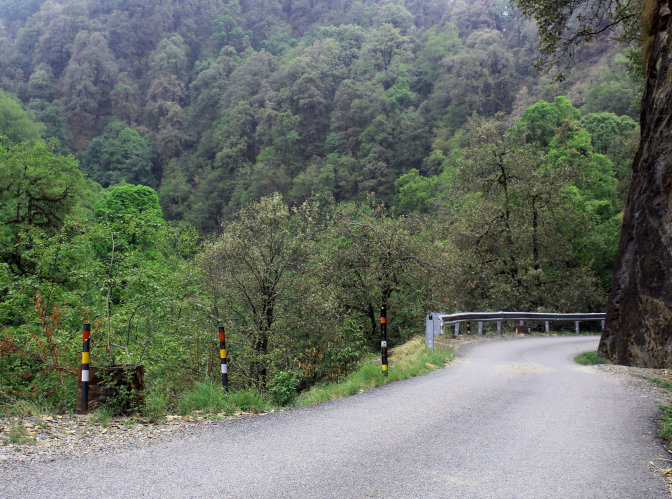 I arrived in Pangot perchance more than anything else. Driving into Nainital was akin to driving into any of Indian city. The roads were jammed and 1 km before the city entire traffic halted due to congestion that wouldn't allow even a stick to pass. To escape the tumultuous crowds I hurriedly decided to go to Pangot even after being warned by a concerned local that there was absolutely nothing to do in Pangot.

Pangot is nestled 15 km away from Nainital on top and behind the ridge that fringes one end of Naini lake. Once the narrow road which was laid down by British as pony trail and just recently tarred turned around the the ridge, an altogether different world made its appearance. The hillsides were lined with thick forest of variety of Oak and Rhododendrons where clouds seemed to descend out of nowhere without any forewarning and flirted in a playful manner. Pangot in fact was just a tiny and quaint hamlet if it can be called so and on the way was even smaller hamlet of Kilsbury. The rising and thickly forested hills that make much of Pangot and surrounding area of around 100 square Km has been notified as Naina Devi Himalayan Bird reserve only in 2015 for being a hotspot of almost 250 different species of migratory birds but this had not saved it from vast damage from forest fires that had ravaged through Utrakhand this summer.

Once you settle down in Pangot it doesn't take much longer to realize that Pangot is an Avian paradise of sorts. Whistling parakeets flying at supersonic speeds dazzle you with their fly-past in an obvious attempt at show off while Himalayan Bulbuls with their distinct white cheeks and yellow rumps nonchalantly perch on tree branches preening themselves. Black headed Jay is most ubiquitous denizen of Pangot seen foraging either on ground or on trees. Why, you have to even share your room for night with a Barn Swallow who is comfortably ensconced in her nest on top of tube light whereas her male partner just keep a watch on you from atop a wall clock. But this is type of company you don't mind here.

Next morning I woke up at 4 am, the time when birds wake up and are most likely to be seen. Even though I am not a bird watcher but some time in Binsar had taught me few tricks. And biggest trick is to just walk silently, listen and observe. Feel as if you are part of the forest and not some alien intruder. Two Spotted Forktails were ahead of me and seemed to enjoy bathing in the stream before hopping along. Following a Plumbeous Water Redstart I ventured further into the stream only to realize that may be I was half a mile up in ravine that I was following and its walls had narrowed and were rising some 50 feet into a thickly wooded ridge where mist and clouds were wafting. I suddenly remembered a passage from Jim Corbett story where he described a ravine like this while following a man eating tiger and ferocious fight between a Tiger and Himalayan bear. Sensing an ominous silence and hearing growl of some kind from atop the ridge, I retreated out of ravine and took a different trail following the lines of thick Oaks. There were all kinds of birds most that I could not recognize. But also many that I could. Birds like Maroon Oriole , Eurasian jay, a splendidly blue in color Verditer flycatcher and Plumbeous water redstart apart from Rufous bellied woodpecker that makes that distinct woodcutting sounds that one keep hearing in these forests. Sometime I would just sit near a grove sighting a bird that lurked nearby before following calls from another grove.

Pangot had opened another window of experience for me. It is a world where forest comes alive with its myriad sights and sounds. Where you are far removed from civilizational noise and transported into magical sounds of birds.

Travel and Adventure stories from India View all posts by xplorazzi

I have heard about pangot and binsar being good place for bird watching. I'm not into wildlife but I love nature, it's only logical that bird sound is synonymous of nature along with waterfall and flowing water.