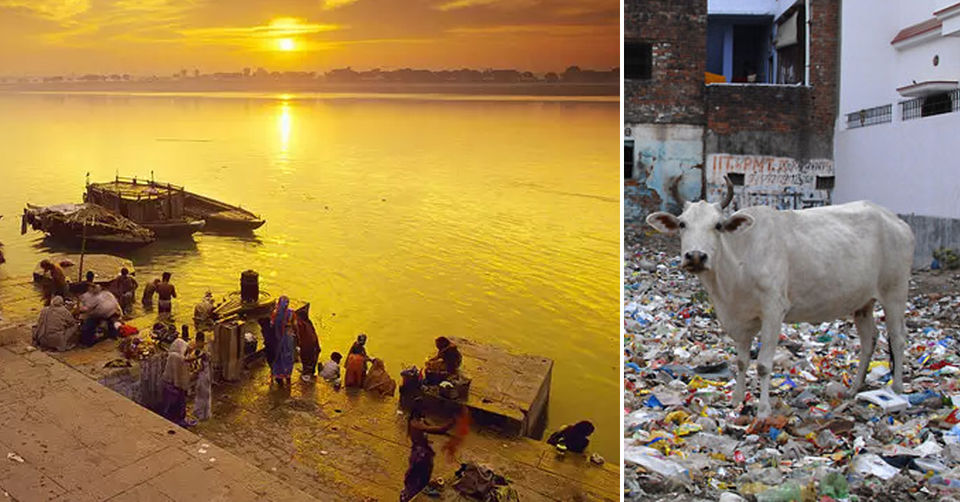 Ever since I got back from my trip to Varanasi, I’ve been going on and on about how wonderful the city is in its various aspects. I loved the people, the food and the vibe. But what I have not talked about so far are the shortcomings of this holy city that over four million people call home. The biggest of them all is the perpetual presence of garbage and filth.

It doesn’t even take a couple of minutes of being in Varanasi to realise that there is probably nothing on the earth that is not dumped on to the streets and into the Ganges. From mounds of trash lining the gullies to cow-dung painted roads, and from red paan spits on the walls to the constant presence of dust in the air, Varanasi is dirty, stinky, and chaotic. It literally feels like a mountain of trash has exploded all over the city.

Given the fact that Varanasi is one of the most important constituencies of the ruling government, you’d think that “Swachch Bharat” would be the most effectively implemented here. But the exact opposite is true. There is a complete and utter disregard for cleanliness. And while there are a lot of problems with the management and disposal, the people’s mentality is at the crux of it all.

People throw their garbage wherever they find an empty spot, many a times right outside their houses. Animals shit while walking and feed on garbage strewn alongside the road. Spitting is a perpetual problem (which is probably why Varanasi has one of the highest prevalence of tuberculosis in the country). All of the public dumping grounds are overflowing and littering is a habit. All of the sewage waste generated in the city is dumped untreated into the Ganges.

Then there is the waste from the temples, hotels, restaurants and all other establishments that makes it way either onto the streets or into the river. No one pays attention to how much waste they’re generating and how to treat it. All of it is dumped together wherever there is space.

As of 2018, Varanasi has an estimated population of over 4.10 million (41 lakh) and with an area of about 81 square kilometres that comes out to a population density of 380 people per square kilometre! In addition to this, Varanasi receives a tourist footfall in billions every year!

According to Uttar Pradesh Tourism reports, in 2018 Varanasi received over 233 million tourists (23 crores)! That is over 56 times the native population of the city. Coupled with improper waste management this has led to the perpetual problem of filth and garbage with no place to dump it.

Too much waste and improper management

The municipal authorities are just not equipped to handle the amount of waste generated by the city. According to a 2013 report (no other calculation has been made since), Varanasi generated over 600 tonnes of waste daily that year! That is over 18,000 tonnes (18 million kilograms) of waste a month! Now, five years later, considering that the resident population has doubled and the tourist numbers have grown by over 10%, you can imagine the amount of waste being generated.

In 2017, the Uttar Pradesh government brought in private players to manage solid waste disposal, but nothing much seems to have changed. According to a study published in the Sydney Morning Herald in 2014, the Ganges becomes the sixth most polluted river in the world after crossing Varanasi, which dumps majority of its waste into the river that is considered to be so holy.

This is the need of the hour. Educating people about the impact of improper garbage disposal and how it impacts their health and society is probably the best way to bring about a change. Only a change in mindset can truly bring about a change in the current conditions. This can have a two-fold effect – reducing the waste load of the city by encouraging composting and other ways of recycling waste at home and also ensuring proper disposal of waste.

Decentralisation of waste collection and management

Right now the municipal corporation of Varanasi is responsible for collection and disposal of waste in the city. If both these processes are decentralised further (collection centres for every ward and district), it will reduce the garbage load on the entire city as well as the river. Kerala can be a good example of this where decentralised waste processing units helped improve the condition of waste disposal in the backwaters.

Right now there is no check on how commercial establishments like hotels and restaurants (especially the smaller ones) dispose off their waste. If you walk along the alleys of Varanasi, you will find that a lot of places dump waste right behind their shop or just in the street. Stricter policies that monitor waste generation by these establishments need to be put in place, along with a cap on how much waste they can generate.

Set up of multiple treatment plants

Considering the fact that Varanasi generates hundreds of tonnes of waste every single day, it is not possible to manage with just a few treatment plants on the outskirts of the city. More treatment plants need to be set up across the city to deal with the huge chunk of waste that is produced everyday.

Dealing with the presence of animals on streets

Another major issue that Varanasi faces is that of animal waste. Animals roam around on the streets and defecate in the open, further adding to the filth on the streets. Overpopulation is definitely to blame for this as it has led to unprecedented and unplanned construction all over the city, leaving no areas or open grounds for animals to feed and roam around. This needs to be taken in account by the government. Feeding spaces or open grounds need to be allocated for dairy owners and other owners to let their animals roam and feed in.

What we can do as tourists/citizens?

While it might feel like as a single entity you can’t do much, but every small step counts.

While in Varanasi, I noticed that herd mentality is very prevalent. Even tourists, who wouldn’t otherwise be found littering did so in the city when they saw everyone else doing it. Be responsible and don’t litter. If you see anyone else doing it, discourage that behaviour.

Avoid use of plastic

Make it a rule to not use plastic. Carry a refillable water bottle and refill it at your hotel or wherever you find safe drinking water. Avoid taking plastic bags while purchasing anything and so on. Even one person can make a huge difference

City residents can start segregating their own waste at home and composting the biodegradable waste like fruits and vegetable peels, leftover food etc.

The garbage problem in Varanasi is so huge that it needs to be attacked from all quarters. One measure at a time is no longer enough. Bringing up these issues with local politicians, volunteering with local NGOs, and implementing habits in your daily life can help start this movement towards a cleaner city.