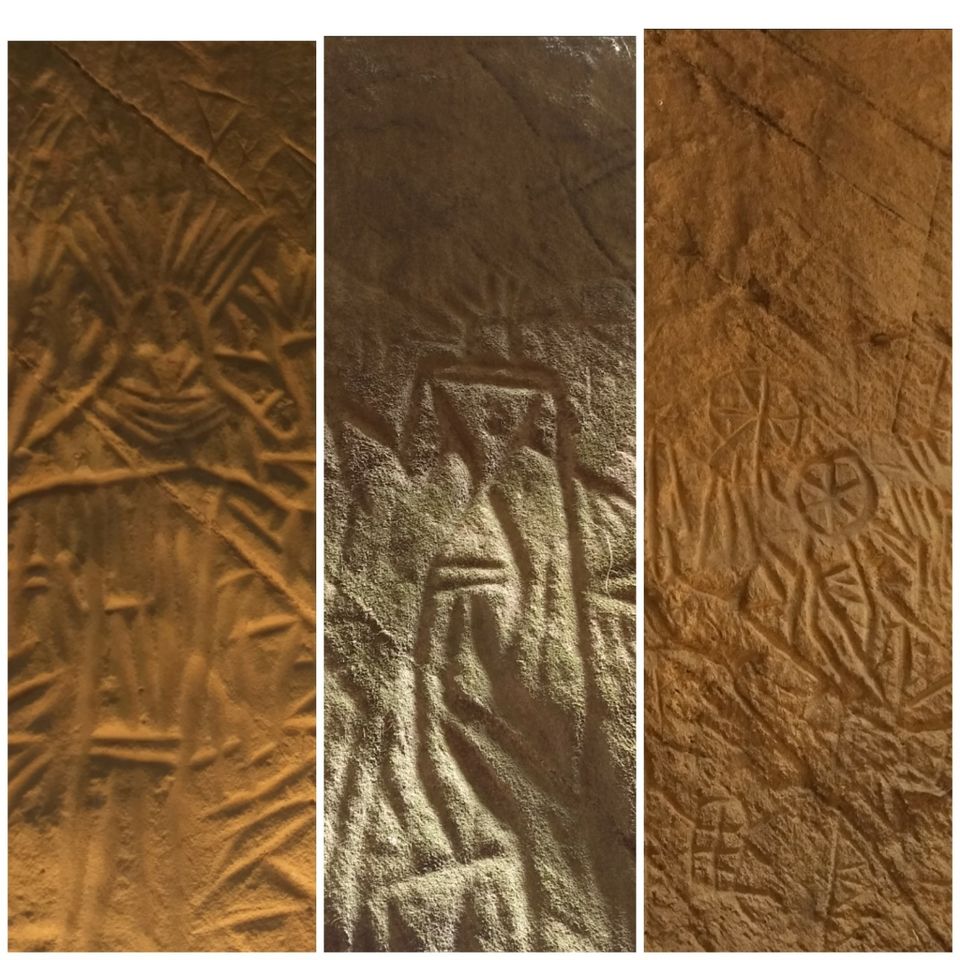 When you hear the word 'Kerala' many things cross our minds i.e., nature, backwaters, lush green tea estates, dense forests and rich wildlife. But there is more to the list.

It was the first time, I heard about Edakkal caves when me and my friends planned the trip to Wayanad for the Republic day weekend.

After spending the evening before at leisure in our rooms at iCon residency hotel, Kalpetta we geared up early for the next day.

The hotel room was compact and best suited for budget Traveller and solo backpackers for an unbeatable price Rs.550/night.

Edakkal caves is about 25kms from Kalpetta in a remote location. You could either hire a day fare taxi (Rs.2000/day and 100kms) or autorickshaw to the place.

The entry fee was Rs.30/adult and Rs.50 for Professional cameras. An interesting thing I noted at the entrance was you have to sticker your water bottles you carry at the entrance by paying a deposit of Rs.20.

Once you bring back the bottle after visiting the caves that money is refunded. It's a very good initiative to prevent visitors from throwing away their water bottles during the long 30 minutes climb to reach the place.

The climb from the entrance is very narrow and steep. People with knee issues may avoid climbing it.

A wheel Cart climbing uphill. Also you could see ladder like depictions in the wall 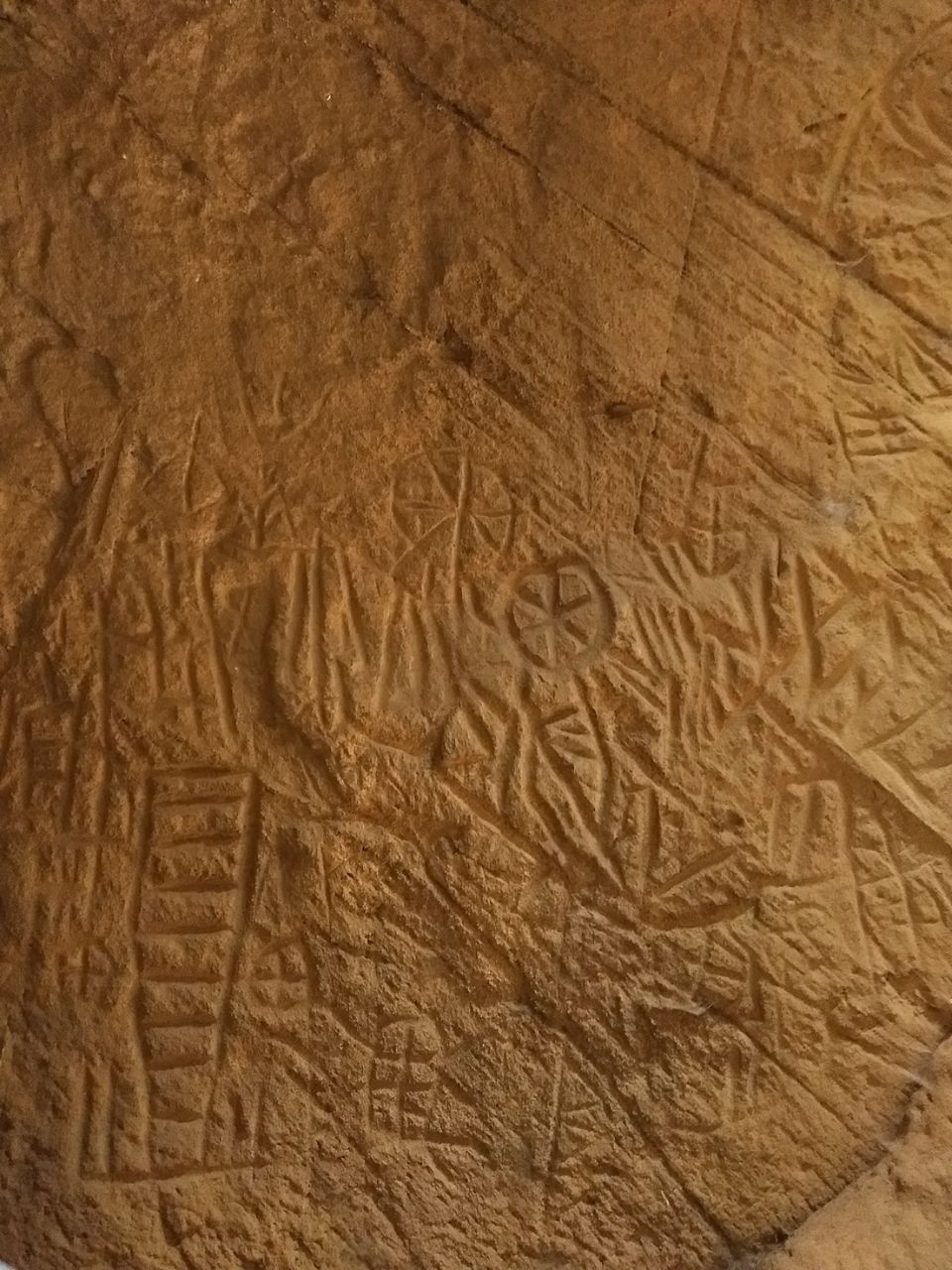 The cave system consists of 2 an upper and lower cave. The lower cave is closed for visitors and contains no petroglyphs.

The sign board read that only limited visitors are permitted at a time, as lower cave supports the weight above it may collapse due to overloading.

The upper cave is two large rocks parted apart with a very large spherical Boulder closing the top and forming the roof.

As we entered the cave, we could see large number of figures engraved on the walls of the caves. There are some many engravings we were awestruck for a long time. Once we were back in our senses. We tried to decipher the engravings to the best of our knowledge.( Myself and a friend of mine are History enthusiastic)

The thing that separates Edakkal caves from the Petroglyphs of rest of world is these are carved on the wall of the caves. Whereas all the other Petroglyphs (ancient cave arts) are only paintings. This suggests that people from this part of the world have developed tools and learnt sculpting.

As I looked up the internet about the caves, dating these arts is very difficult and may range anywhere between 10,000 BCE to 3,000 BCE. Even some studies suggests connection to the Indus Valley Civilization.

From our observations, the following were the figures we could decipher to our best.(Check out the description on each image)

1. A religious man/leader: identifiable by distinct and extensive ornaments depicted.

3. A Women: distinguishable from the distinct shape used for depiction with a narrow waist and broader hip.

5. Ladder/steps: though there are no specific proofs of use of ladder in the time period, the image clearly depicts steps.

6. A Millipede/ Snake: depicted as a slender structure however the leg like feature on both side of body suggests a Millipede and other similar slender body without legs suggests a snake.

7. A star: with no light pollution the the Night sky on Neo-lithic man would have been very vibrant, which might have inspired them to record celestial body in the cave.

Apart from this there are several carvings and symbols which are near impossible to decipher, much like that of Harappa.

After going through rigorous discussions and sharing each other's view, we climbed down the Edakkal caves.

The place may need anywhere between 15-30 minutes climb based on physical fitness.

It's a must visit place if you really want to get awestruck by our human history in Southern India.

Two significant men of the tribe. 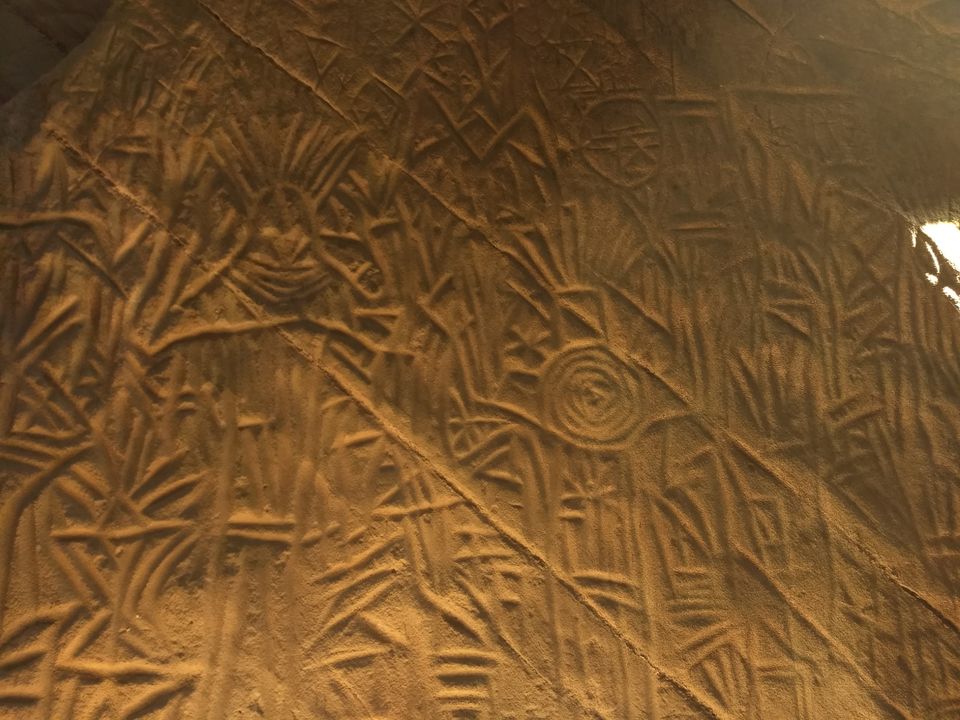 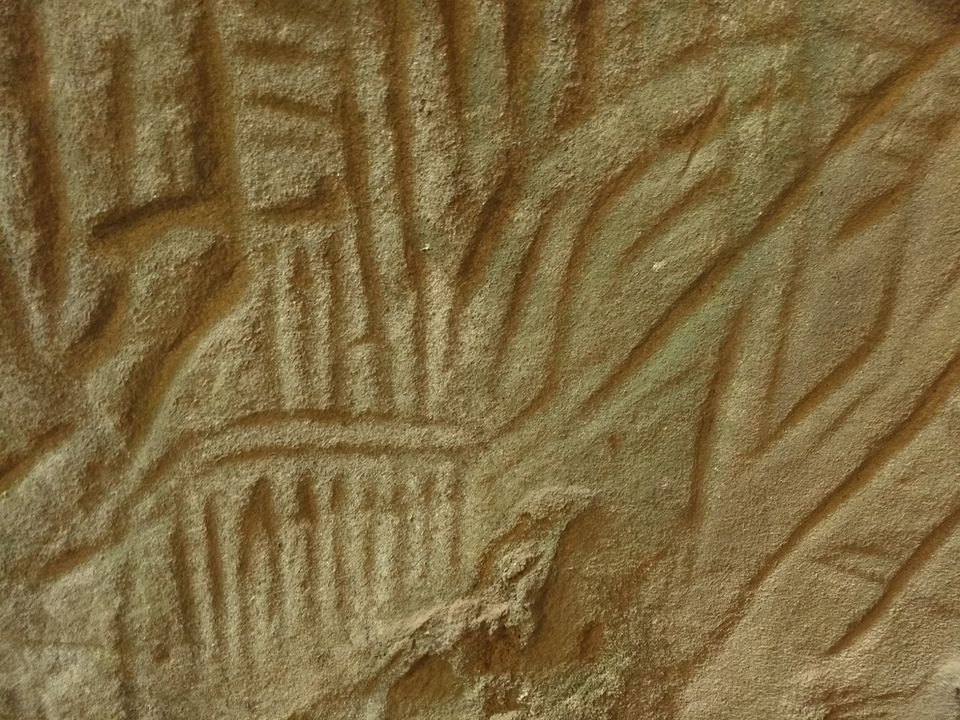 The women portrayed with narrow waist line! It's the only female figure found on the caves 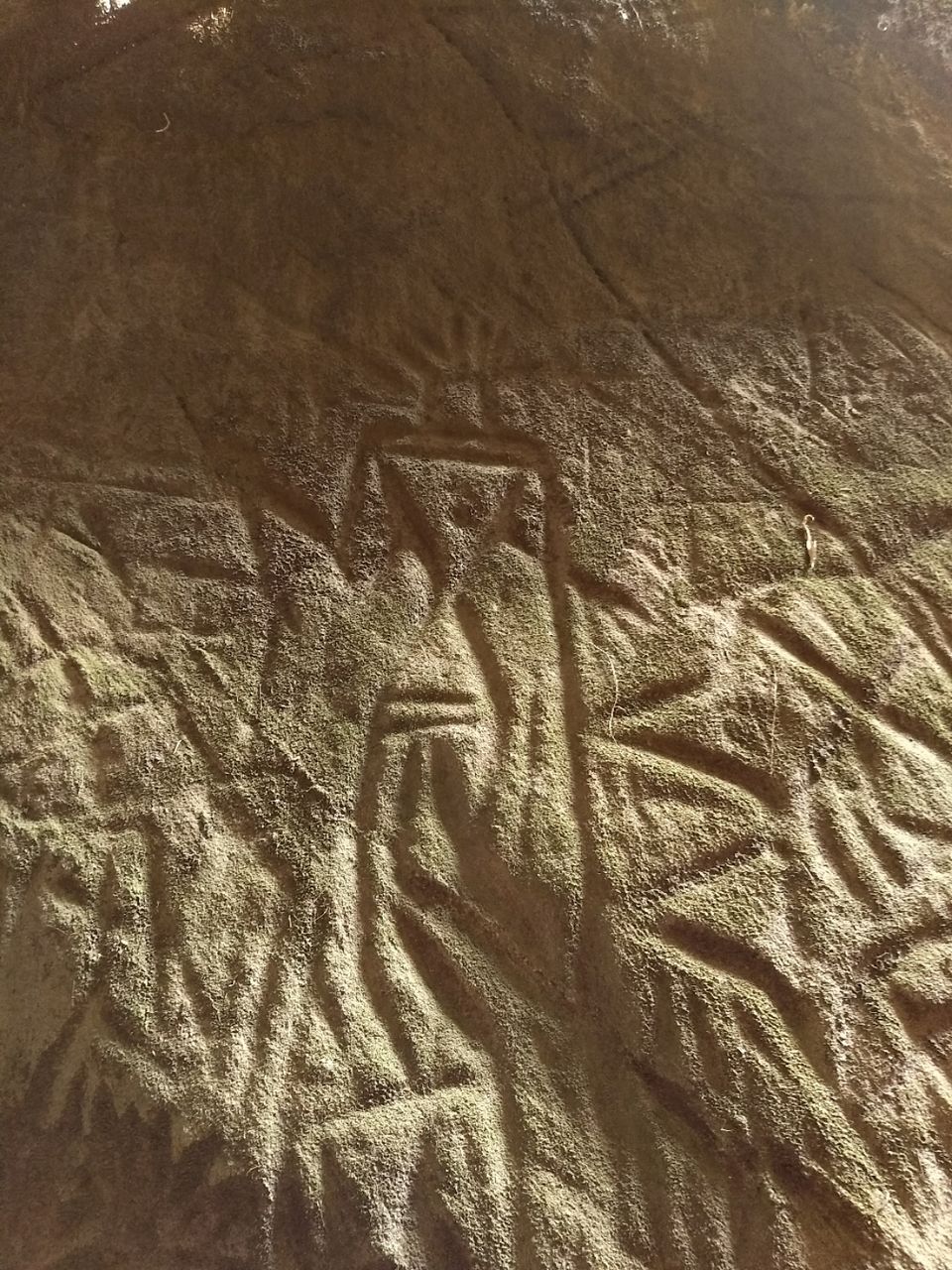 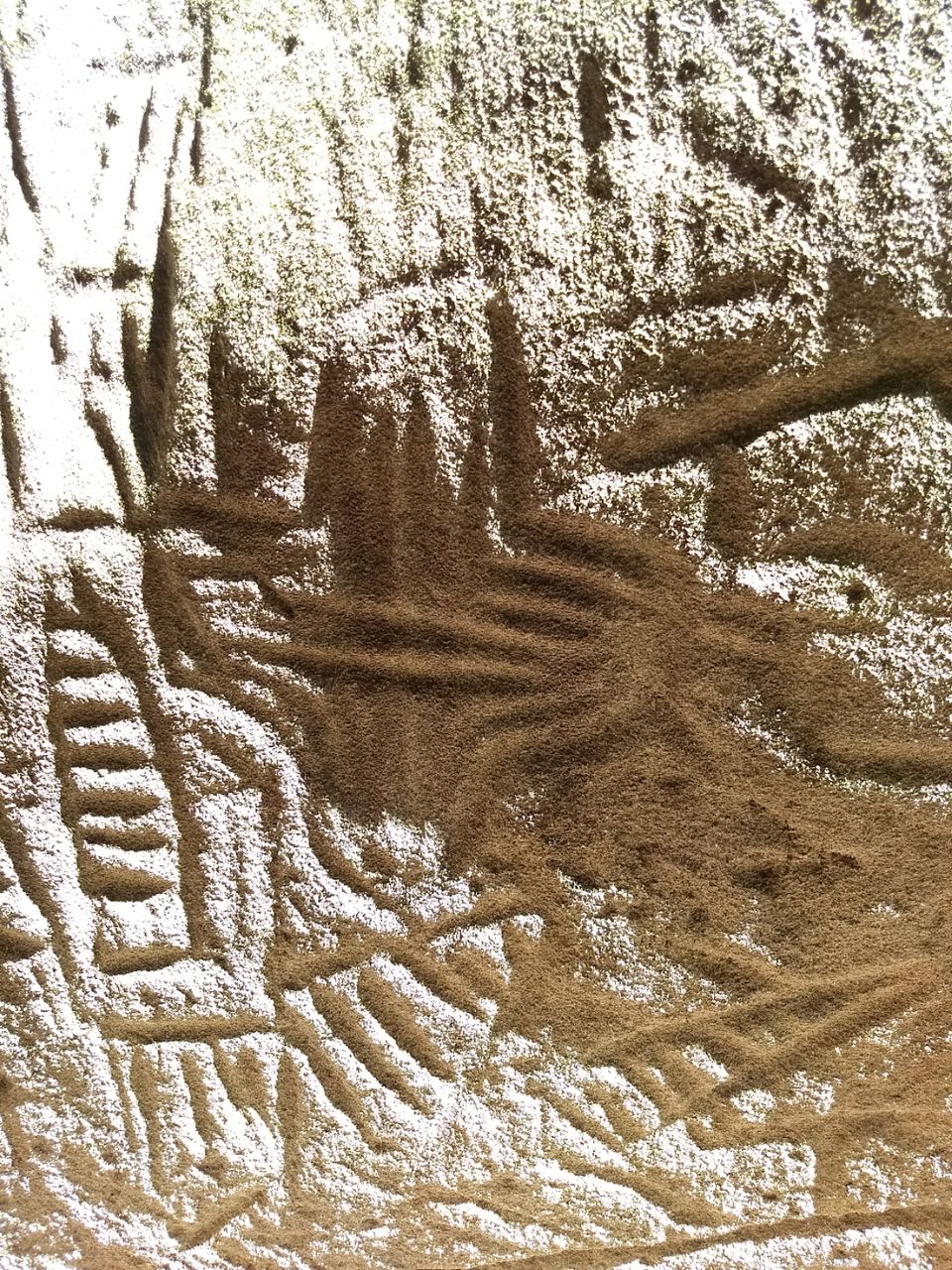 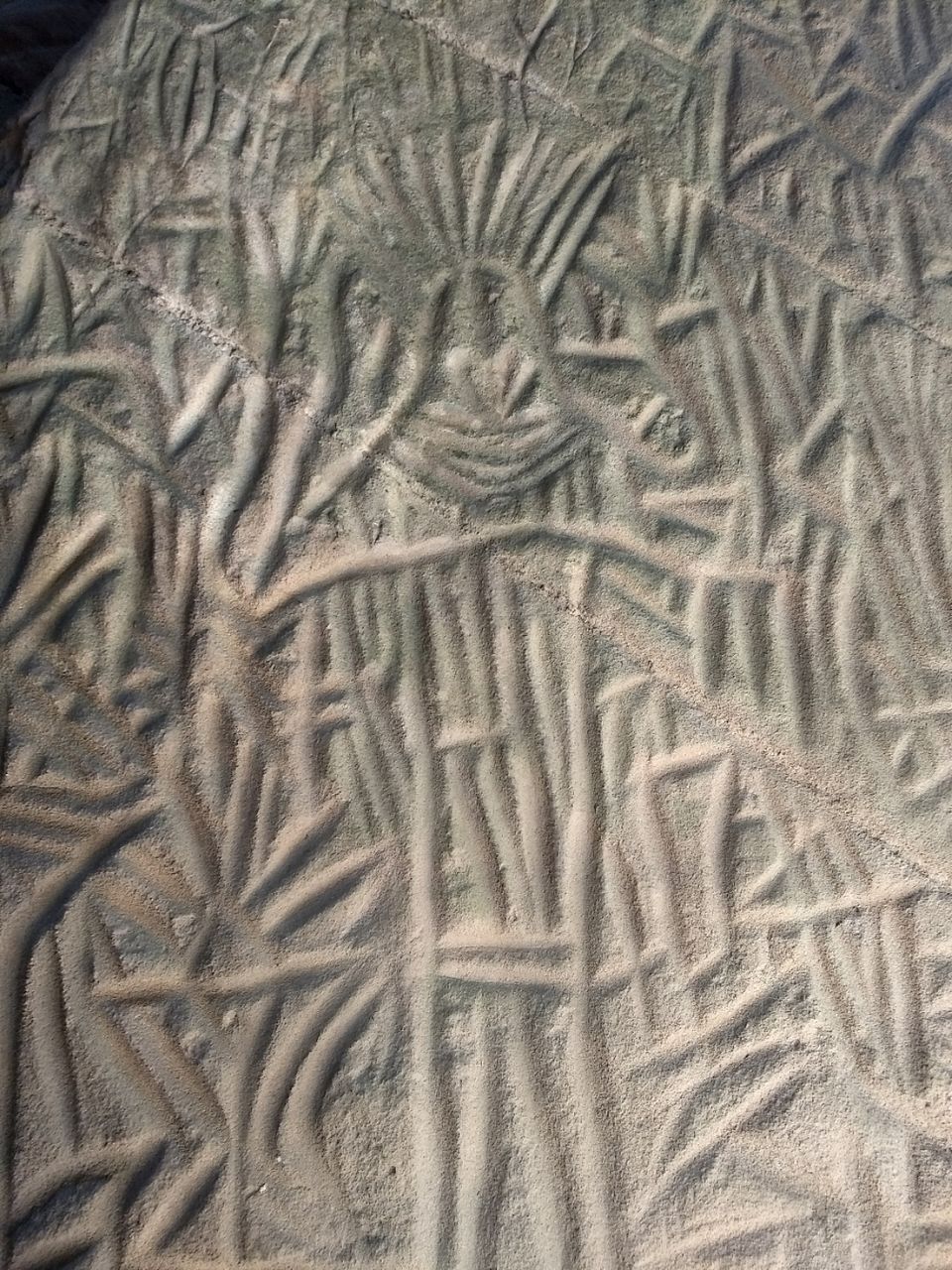