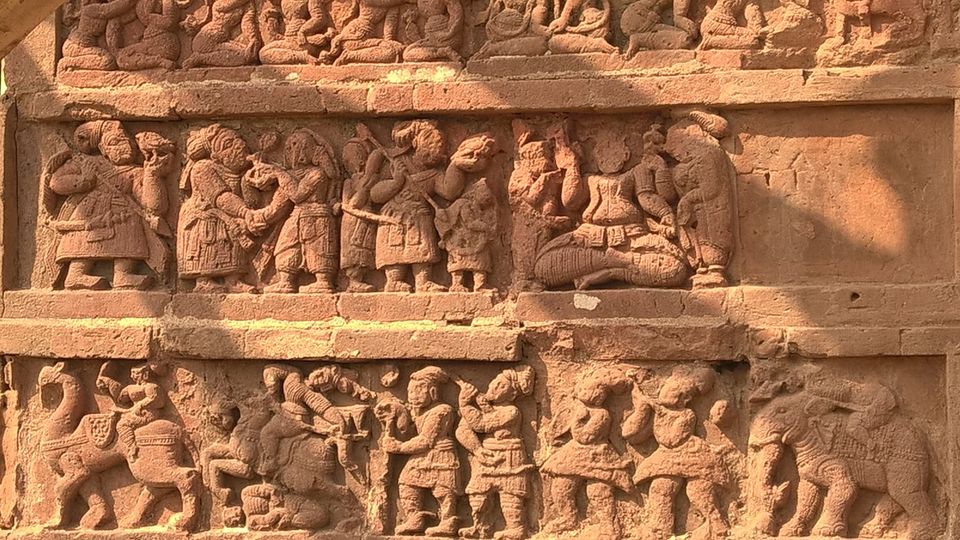 If you are one of those who secretly wish to time-travel to medieval ages or even before that, then these places will surely offer you enough to quench your thirst for the past. There are several spots around Kolkata where you can unravel history's many mysteries. These are only a few hours' drive away from Kolkata, and, so, ideal for a weekend getaway.

The history of Bishnupur, a town in Bankura, dates back to the 4th Century Gupta dynasty. Another version holds the Malla kings to be the founders of the town. This seems to be more believable, as it is indeed the terracotta temples, built by the Vaishnavaite Malla kings, that give the town its unique marker of identity. 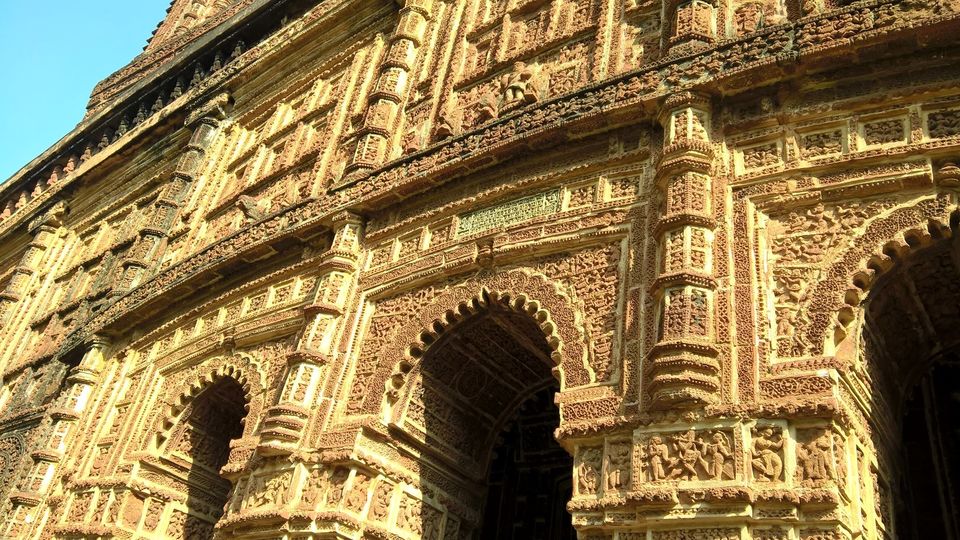 Bishnupur is a pleasant 5 hour drive away from Kolkata. It has a certain majesty about it. When you cross the Garh Darwaza (literally, the Fort Entrance) to enter the red earth town, you can see in your mind's eye the parade of kings and nawabs passing through this gate to enter the ancient city. 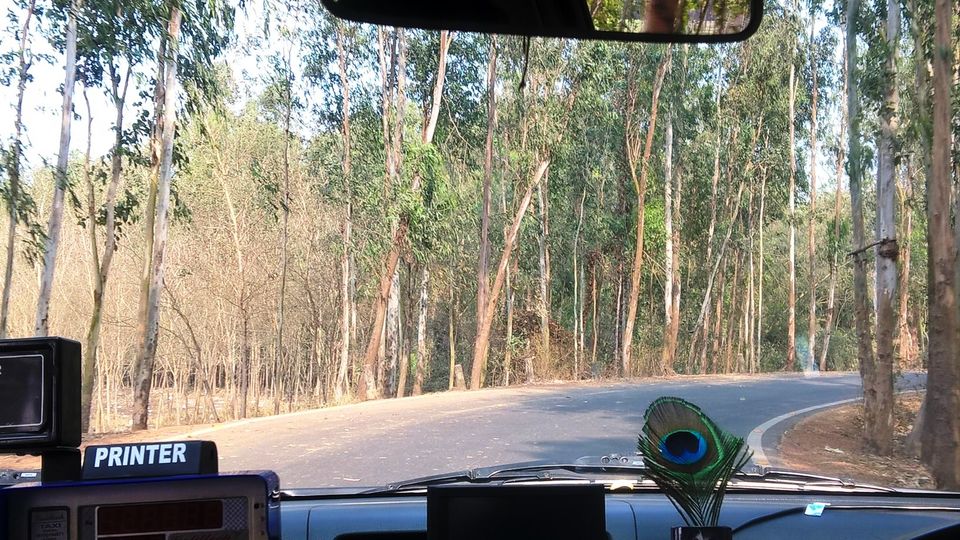 Major attractions in and around Bishnupur

The historical monuments of Bishnupur narrate stories of victories and defeats and interlaced cultures, but they are all presented in such fantastic ways that it's hard to separate fact from fiction.

Take the story of Dal madal cannon for instance.

The 3.8 metre long cannon is a proof of the Malla kings' victory over Maratha bargis (a group of Maratha marauders who plundered the rural areas of the western part of eighteenth-century Bengal).

However, the notice put up by the Archeological Survey of India records a rather mythical story of divine intervention. It says that according to popular belief, it is the family deity Madanmohan (another name of Vishnu) who fired the cannon and assisted King Gopal Singha in his battle against the bargi leader Bhaskar Rao. 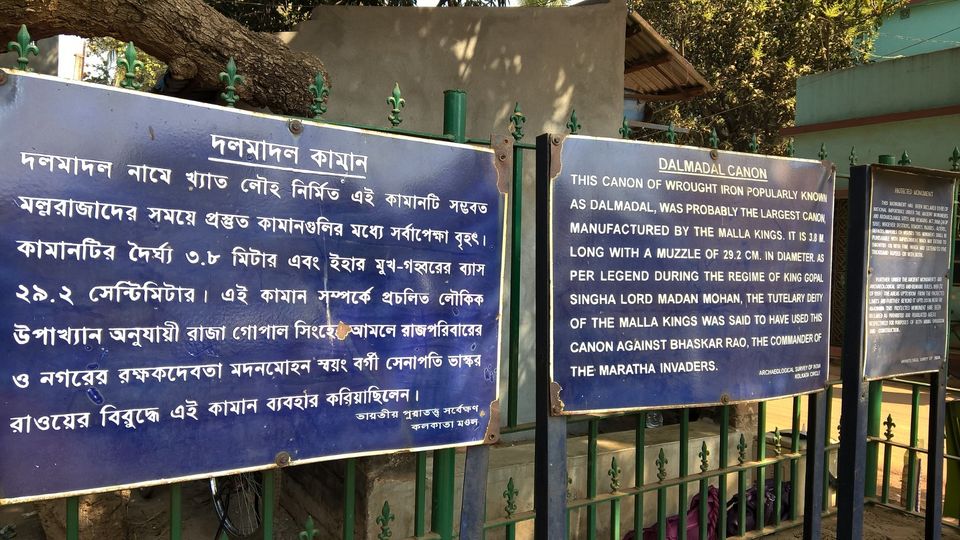 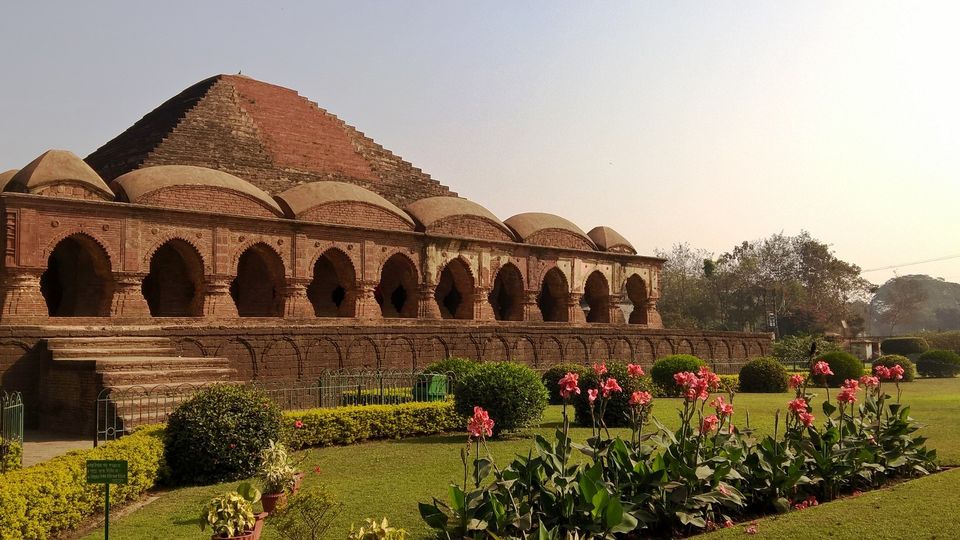 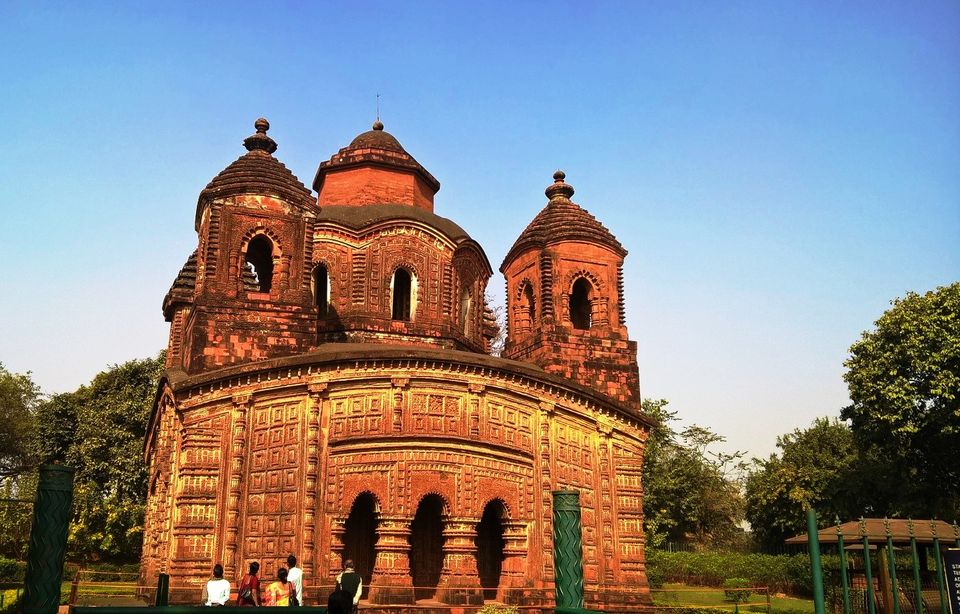 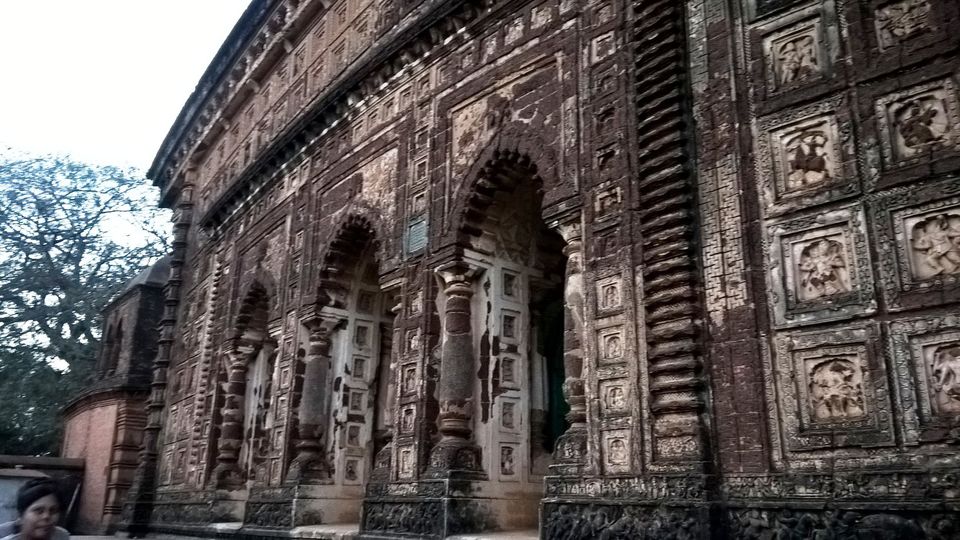 This artificial lake in Bishnupur is believed to be haunted.

The great Malla king Raghunath Singha dug up this artificial lake as a gift to his Persian lover, Laal Bai, a celebrated classical dancer.

But Laal Bai was killed by the king's Hindu wife: she, along with the son she has born to Raghunath Singh, was drowned in Lal Bandh.

Even now, the locals say, the desperate final cries of Laal Bai can be heard over the lake on moonless nights. 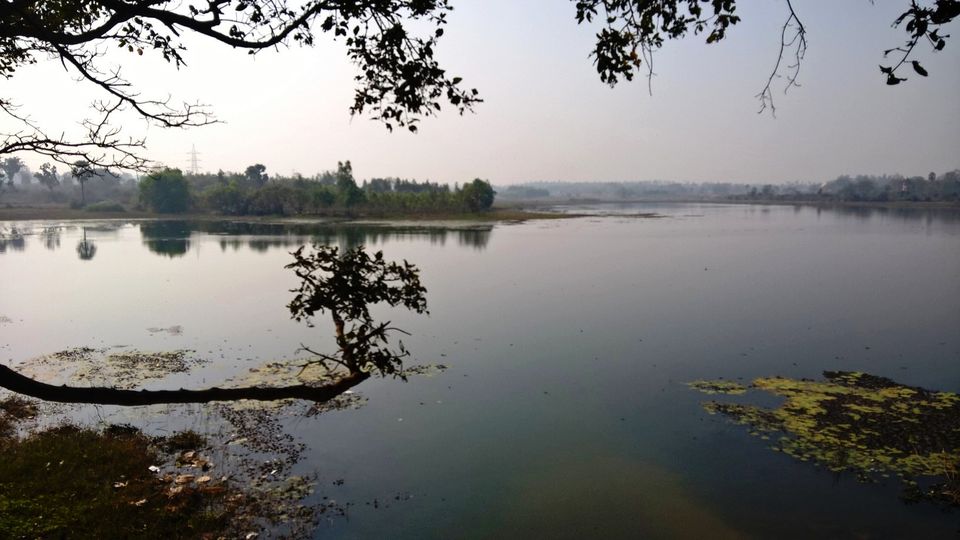 Besides being famous as the birthplace of the 16th century religious reformer Shri Chaitanya Mahaprabhu, this town in Nadia has one other attraction. In Bamunpukur, a village close to Mayapur, one can see the ruins of the citadel of the 12th century Sen dyanasty, which remained hidden from common eye till 1980s when the Archaeological Survey of India started excavating the place.

The place has a huge mound covering an area of 1300 sq. ft. The mounds are called Ballal Sen-er Dhipi (the mounds of Ballal Sen). Walking through the ruin, you feel transported to medieval Bengal and start imagining how Bengalis then led their life, centuries before the Muslim Khilji Sultans came to rule this part of India. Historians claim that the ruins may belong to the lost city of Vijapur, the capital of the Sen dynasty. Vijapur, founded by Vijay Sen, father of Ballal Sen, was an prosperous commercial centre. 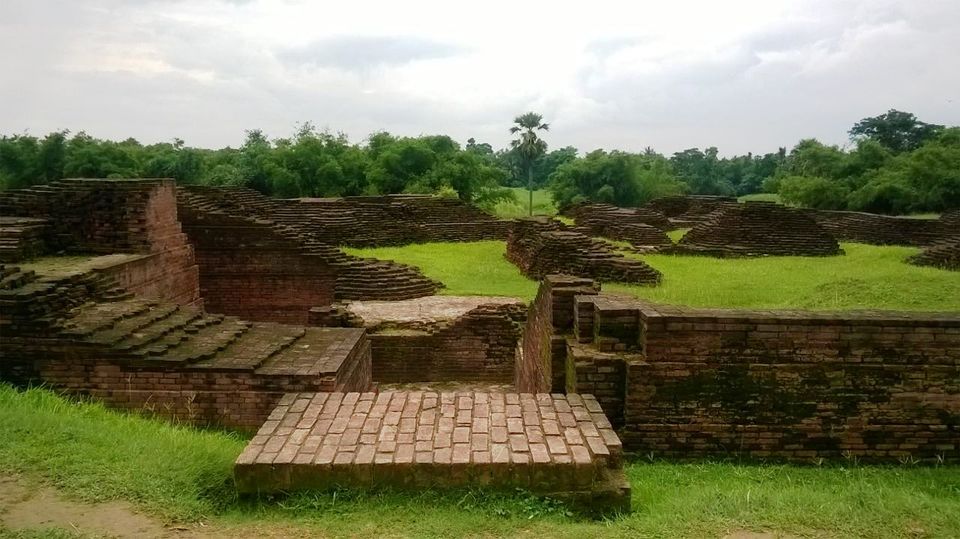 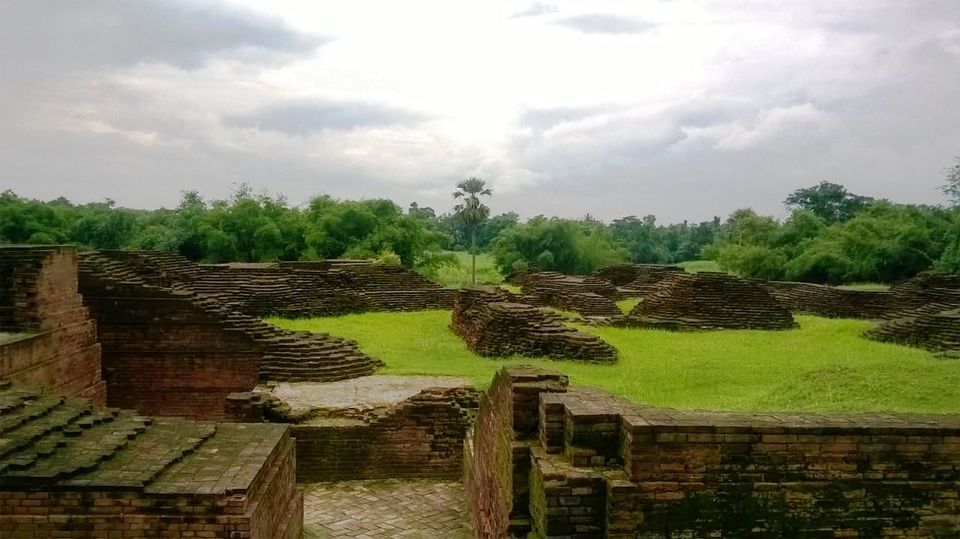 The myths surrounding many places in Midnapore bear references to prehistoric times. Kharagpur is a case iin point. A major industrial centre in Midnapore, Kharagpur is believed to be ruled by the Demon King Hiramba, and hence, is as old as the time of the Mahabharata. Pancha Pandavas spent some years of their exile here. The story goes that after Bhim had fallen in love with Hirimba, sister of Hiramba, an outraged Hiramba fought with Bhim and was killed at the very place where modern-day Kharagpur is located. Interestingly the local folk believes that the crumbling fort at Karnagarh too had once served as a hiding place for the Pandavas.

Karnagarh, now, is a village lying about 10 km north of Midnapore Town. A major attraction of this village is the ruins of the stone fort. Remains of the surrounding walls, barracks, temples and water tanks are strewn at the fort compound. According to historical records and the architectural style of the temples, it is claimed that these were built by Raja Karnakeshri of the Keshari Dynasty.

Besides, many 17th century temples can be seen in this village. The Anadilinga Dandeshwar and Devi Bhagavati Mahamaya are the chief attractions of this place. There are three stone gates to enter the temple complex of this temple.

Following the typical architectural convention of Orissa, the Dandeshwar Temple is 60 ft high and 20.6 ft long. In place of a deity, this temple has a 8 ft pit, called Jonipith. The Mahamaya Temple lies beside the Dandeshwar Temple and is dedicated to the Mother Goddess. The temple enshrines a statue of Goddess Mahamaya in a muslin sari. 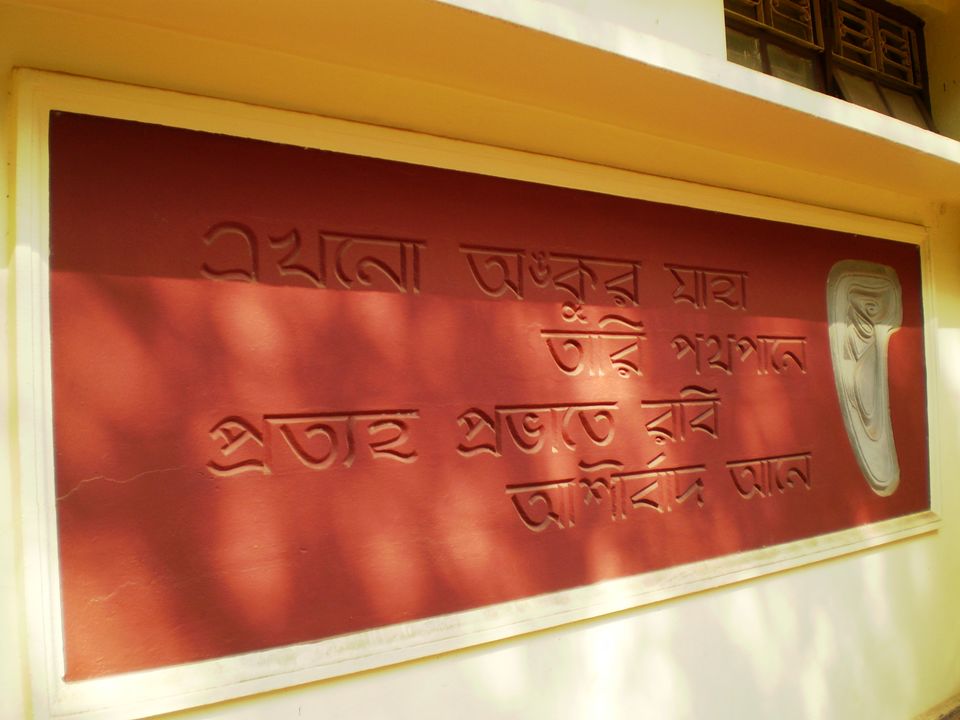 Famous as the town embodying Rabindranath Tagore's ideals, Bolpur in Birbhum, West Bengal, instantly attracts you with the serenity of rural Bengal. The red soil, the vast paddy fields, golden under an afternoon sun, the eucalyptus-bordered avenues have a certain charm that soothes you after a long's weeks work. It takes only a meagre 4 hours drive from Kolkata to get to this seat of beauty. Plus, you have the perk of stopping at Shaktigarh, enroute to Shantiniketan, and have your fill of the renowned lyangcha (a deep-fried sausage-shaped dessert).

Places to visit in Santiniketan:

The area throbs with the presence of Tagore. Quiet and peaceful, the place is full of exquisite sculptures, murals, paintings and innovative house designs---all works of stalwarts of Indian art and architecture, like Nandalal Basu and Ramkinkar Baij. Ample food for thought for an art lover, no doubt! 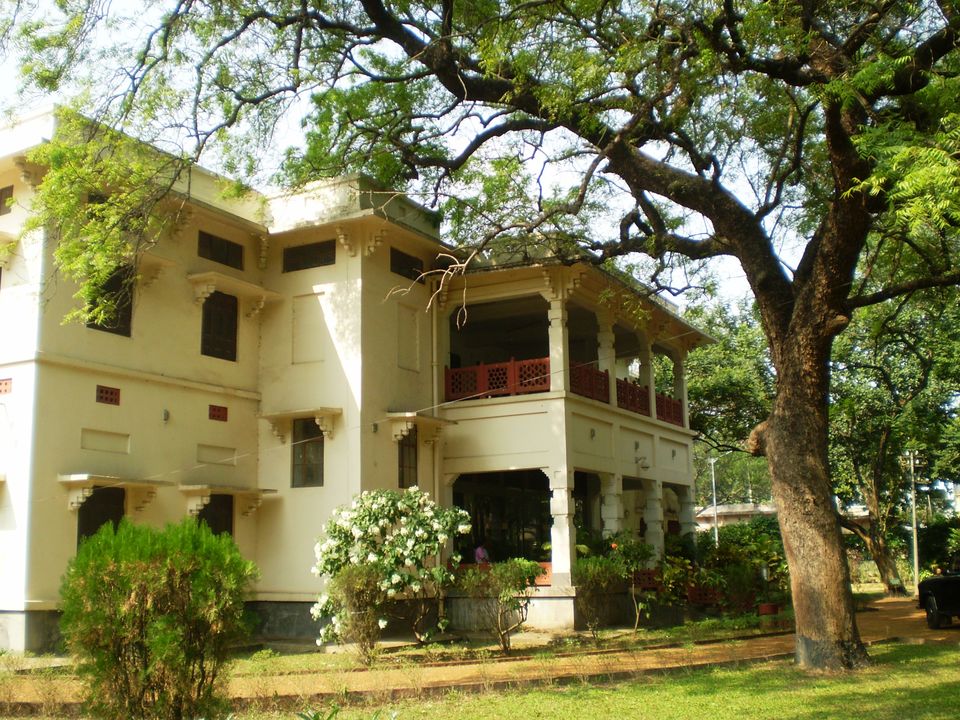 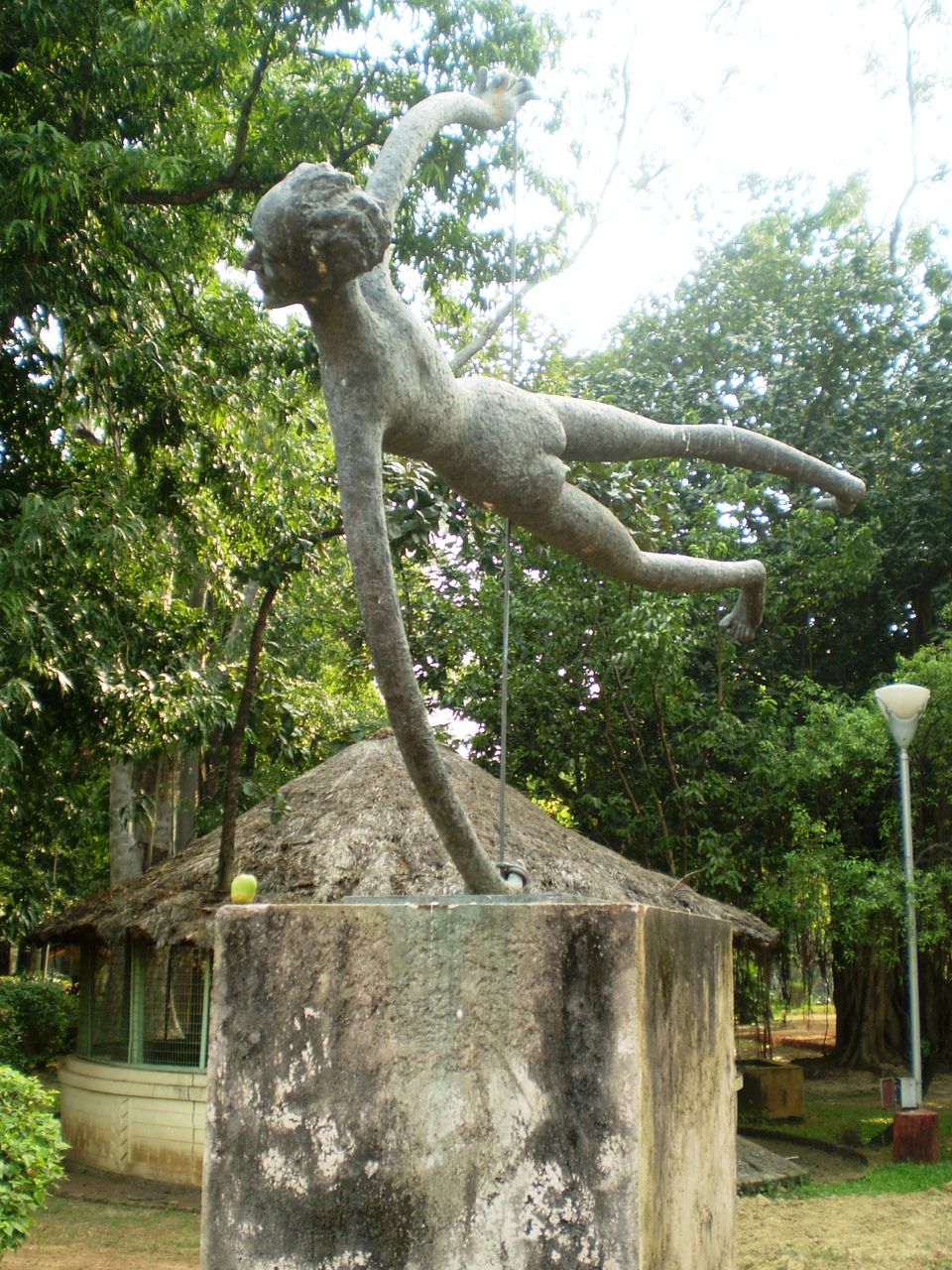 It is a natural formation. The red earth here has been beautifully carved by wind. The place is full of sonajhuri trees. The trees' golden yellow leaves contrast with the red laterite soil of the region to create a remarkable effect. On a moonlit night, the place seems other-worldly in its beauty.

One of the major attractions of the Khoai region is the Sanibaarer Haat (the Saturday market). If you're spending your weekend in Santiniken, here is your chance to fill your backpack with souvenirs and tribal handicrafts, from elaborate paintings to adorn your living-room walls to the intricate dokra jewellery. Sanibaarer Haat is a paradise for collectors of Indian handicrafts. 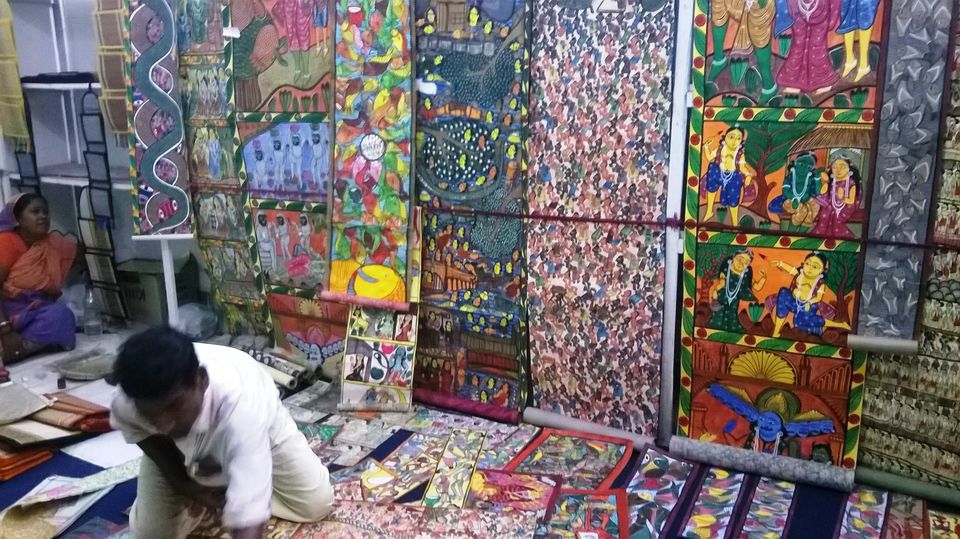