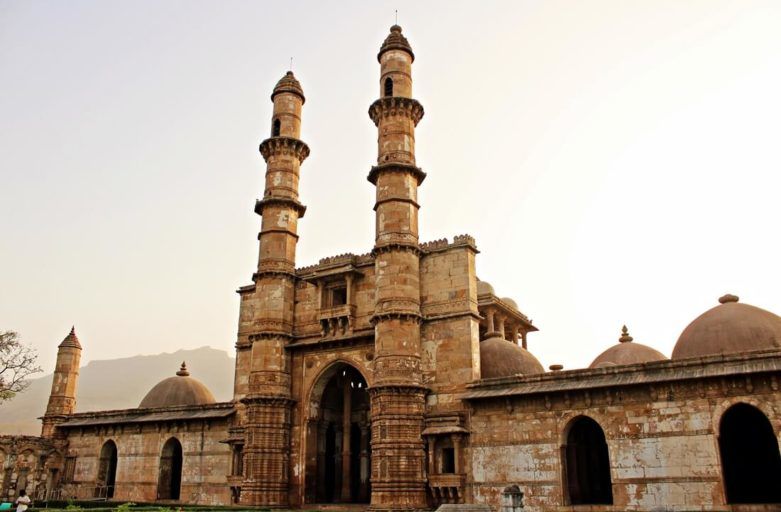 I was standing in the aisle of a crowded bus continuously wiping sweat off my face and tracking myself on the google map. A middle aged man taps me from the back and asks "Where are you going?"; "Where are you going?"- a typical go to questions that we Indians ask to break ice and strike conversation with any stranger we meet while travelling. "Chapaner", I said. The man grew more curious, "Which village?". I didn't have an answer to that. I replied "I am traveling to explore the ruins of Chapaner". " Khandar !!!", he replied, the man seemed quite surprised with my answer and next few minutes was about how useless it is to spend money and travel to see ruins. Slowly few more inquisitive passengers joined and I had few more questions to answer. I was advised to alight before the Halol bus stand and the guy who first inquired about my existence in that decrepit bus assured me to notify where to get down so as to easily get transport for the next leg of the journey to the archaeological site which was few miles off the highway. After sometime everything settled and people all around started to doze only to be occasionally disturbed by the sudden brakes and the speed breakers. The bus kept moving and I was continuously tracking it on the GPS. Suddenly the man who assigned himself the task to notify me asks me to get down and starts to pull the string connected to a bell which is a signal for the driver to stop. However, the other passengers disagreed to his proposition and there was a brisk debate among them as to which is the correct place for me to alight, meanwhile creating a ruckus with 2 of them pulling the string and 2 others asking the driver to move on. The driver had enough of it, he stopped the bus and asked me to get down. So there I was, 2:30 PM on a sultry summer afternoon standing on a highway with no clue what to do next.

I stopped some people to ask for directions and one of them was kind enough to drop me at a chowk where he said I would get share autos and buses to the archaeological site. I kept waiting there under the excruciating sun but didn't find any public vehicle going that way. Then came a chakkra - a motorcycle with its rear removed and attached to a carrier. Some time back I was taking about the Indian inquisitiveness, now here's another aspect indigenous to us - juggad innovation. With no other option, I climbed onto the carrier, originally designed to ferry goods but now packed with 11 people who reluctantly adjusted themselves to find some space for me. Now this is the fun of being a traveller, few hours back, I was walking in the royal balconies and corridors of the Laxmi Vilas Palace of Vadodara and now here I am jostling with the villagers for foothold on that chakkra. 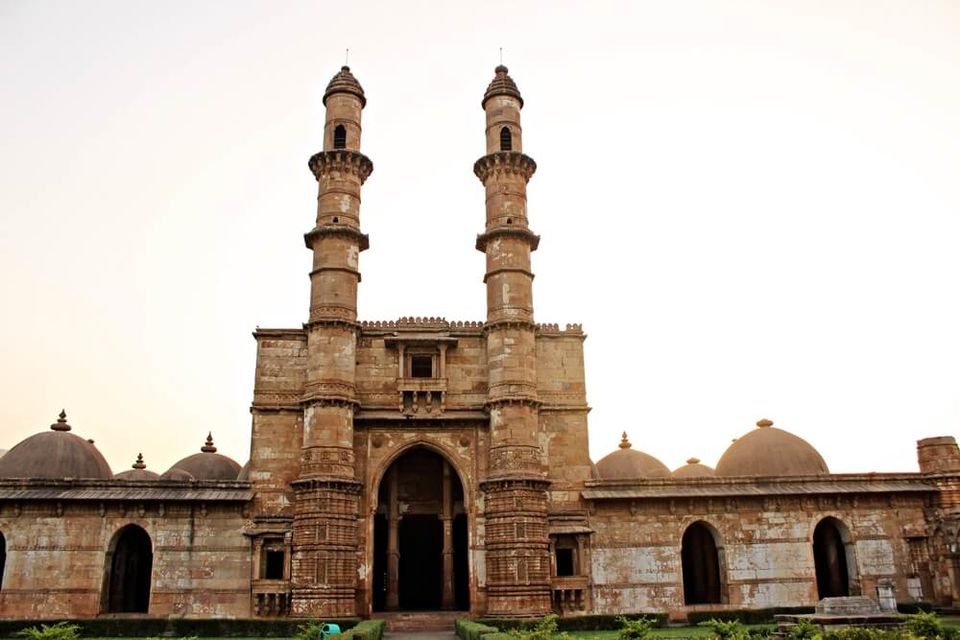 The chakkra moved on and hot wind clashed on my face as I helplessly stood there immobile, unable to do anything other than staring at the dry vegetation on both sides of the road. After about 20 mins, I reached at the archaeological site. There were stone ramparts of what seemed like an abandoned fort. Chapaner is an abandoned city that was established in the 8th century during the reign of the Chavda dynasty. The city has been repeatedly plundered and is now obliterated. The historical ruins were accorded UNESCO World Heritage Site in 2004.

I walked through the archways and the first monument I came across was the Seher ki Masjid. It is constructed on a raised platform and has 5 domes and 2 minarets. Unlike the ornate minarets of other mosques constructed in the same era, the minarets of this monument lacks artistry but the deficiencies are covered up by the excellent symmetry of the monument. 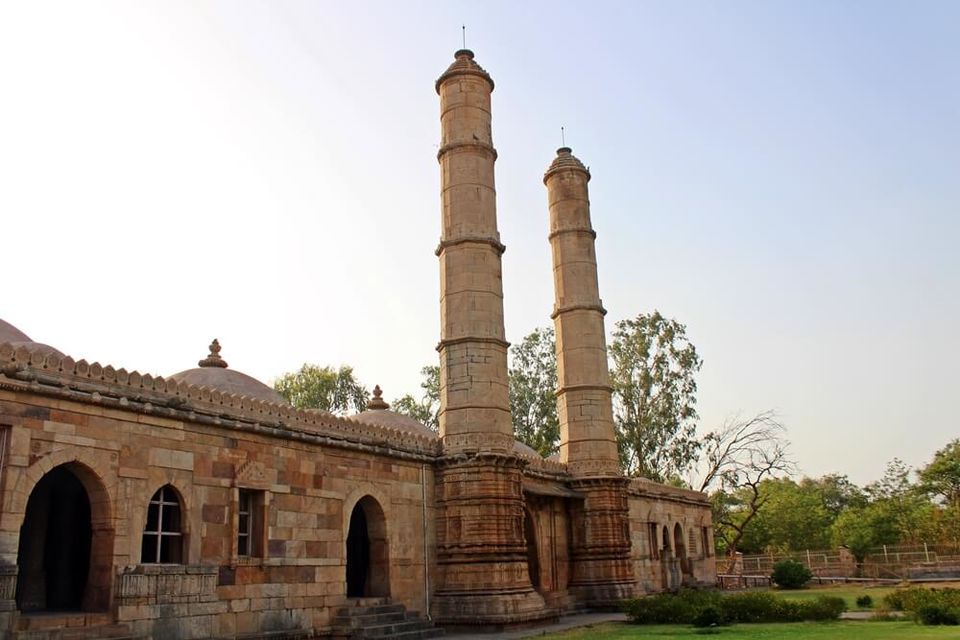 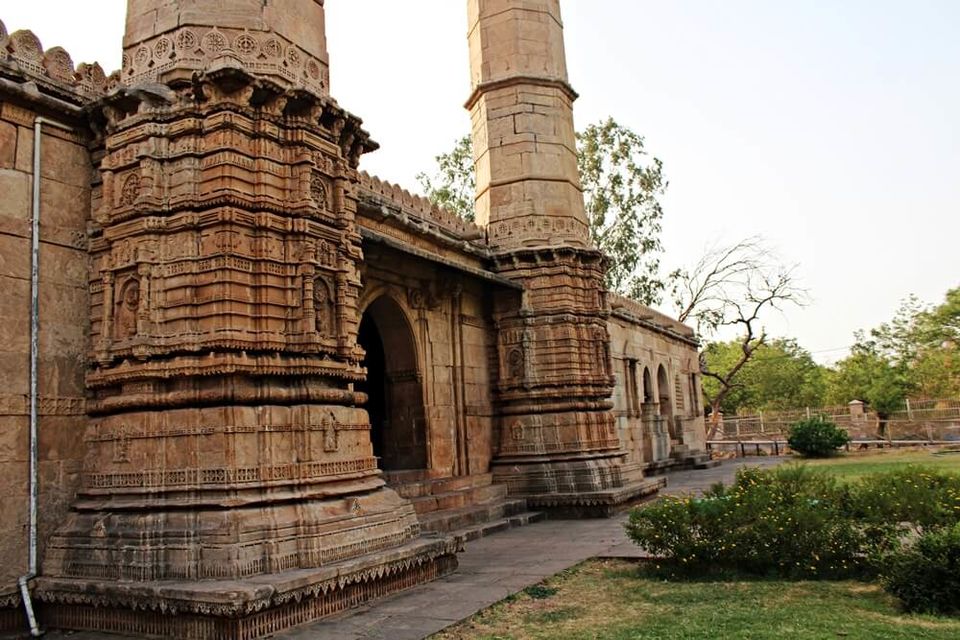 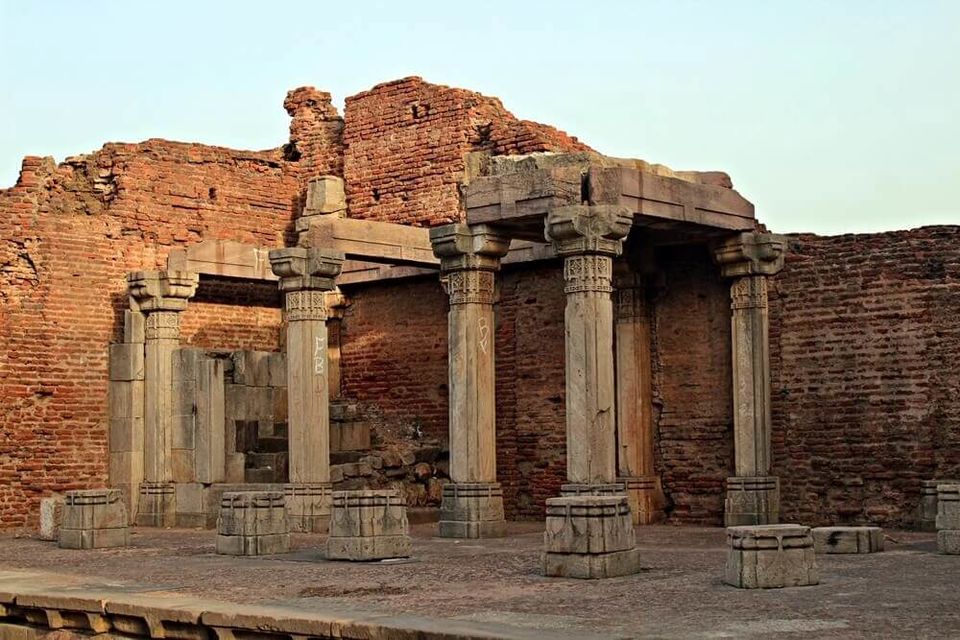 As I walked ahead, I came across many neglected monuments which are almost strewn over the place. I walked to the Jami Masjid (or Jama Masjid) which is about 500 years old and the most beautiful monument in the archaeological site. It is the most noteworthy monument build during the reign of Sultan Mahmud Begada. The main prayer hall has eleven domes build on tall pillars including a gigantic central dome having a 2 storied architecture. There is a portico which has a large dome built over a podium. There are tall octagonal minarets situated on both sides of the main carved entrance which are 98 feet high. These minarets have excellent stone scroll work on them. There are few tombs in the premises. When I reached the monument, it was devoid of visitors and there was absolute silence only to be disturbed by the occasional chirping of birds. It was scary and creepy to roam in that gigantic abandoned monument. However, it also allowed me time to peacefully explore the beautiful monument and I cherished the beautiful sight of watching the sun set behind the tall minarets of the mosque casting even larger shadows on the earth. There is a large octagonal stepwell adjacent to the mosque which was presumably used for ablution purpose before entering the holy shrine. 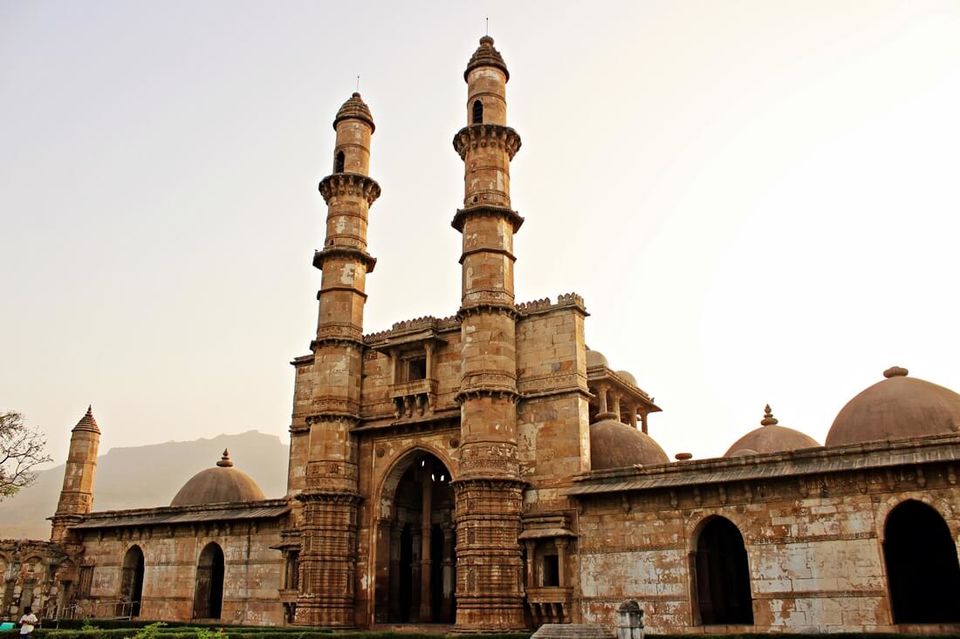 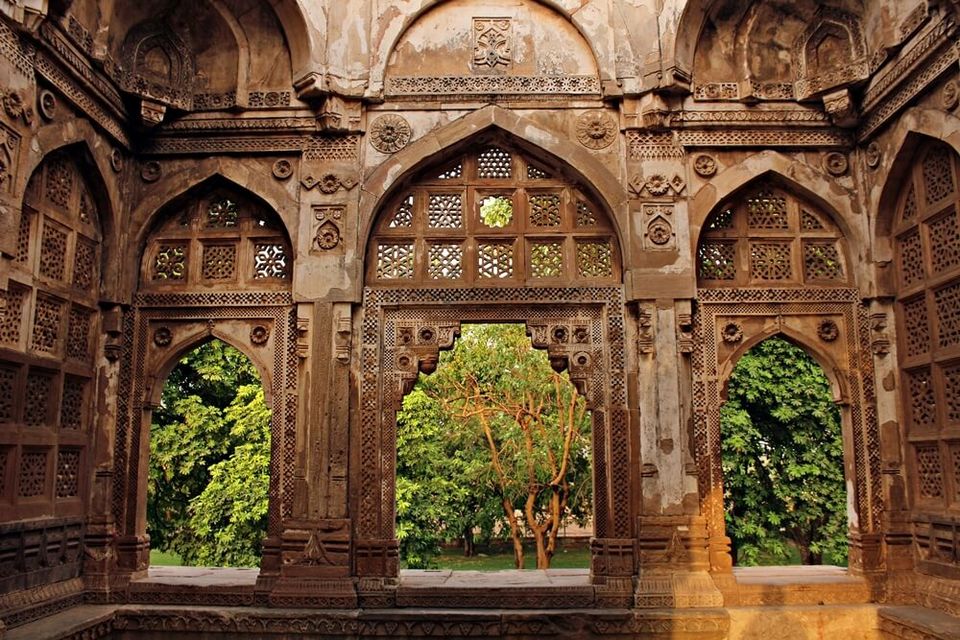 By the time I completed exploring the Jama Masjid, it was already getting dark and I still had Amir manzil, Nagina Masjid and Kevda Masjid to cover. To save time, I decided to take a shortcut and ventured into a mud trail. The trail to some distance was flanked by few buffalo sheds and hatched houses of their caretakers. As I moved ahead, I found myself on a completely lonely and deserted path. However, I didn't want to return without visiting these monuments, so I kept walking. I could see the Pavagadh hill with the orange radiance of the setting sun on its slope. After few minutes, I reached the Kevda Masjid. It was again completely deserted with no one around. I quickly explored the place, clicked a few photographs and set myself on another trail in the direction indicated by a painted board. After walking on that trail for few minutes, I didn't find any trace of the next monument so I halted to check on the GPS and damn.. The GPS was unable to find network !!! I abandoned my adventure and started to walk back along the same path. I could hear peacocks hooting in the wild and other strange noises but I kept walking back. When I reached the Kevda Masjid, I was surprised by the sound of a loud whistle and heard someone shouting. I was initially unable to locate the person in the faint light but after some effort, I was able to spot a security guard in the Kevda Masjid, who walked to me and advised me to leave. So this was my failed attempt to visit the Nagina Masjid. 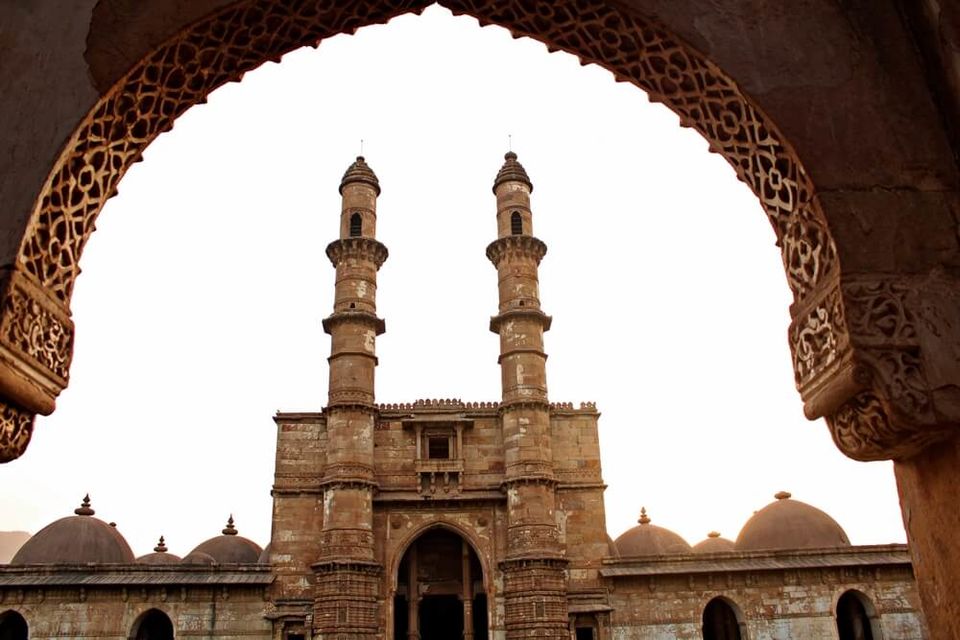 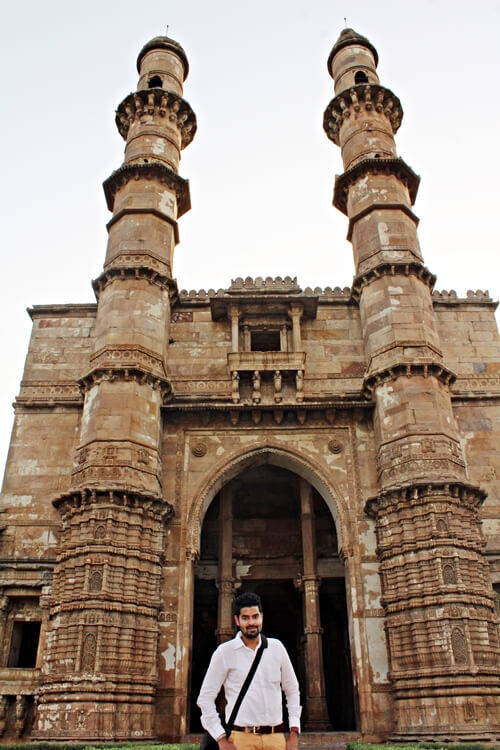 Until now, I was only focused on reaching the archaeological site and exploring the monuments but now it was time to leave. I was completely exhausted after a full day of travelling especially because of the hot afternoon followed by about 2 hours of exploration on foot amidst the ruins of Chapaner. I trudged to the nearby bus stop to enquire about buses to Vadodara. Adding misery to my already exhausting day, the counter was locked and no one in that small countryside bus stop had any clue about the timings of the buses. The next two days were holidays so any bus arriving at the bus stand was already packed with passengers to its maximum capacity. I kept waiting for the next 2 hours when the saviour finally arrived - a semi luxury bus directly to Ahmedabad. Perhaps because of the relatively higher ticket prices of that bus, it didn't find much takers and was almost empty. I bought few packets of chips, biscuits and boarded the bus. It was an enervating yet exciting day of travelling. Traveling to such off beat locations adds amazing experiences and creates beautiful stories to share. The trip to Chapaner was one such amazing day of experience and gave me a deja vu of Hampi. I hope you liked this post. Please share your feedback in the comments section below. Travel & Spread Love...