Bijapur in North Karnataka was a part of our Road trip and a part of the Bijapur -Aihole-Pattadakal -Badami - Hampi circuit. It was our first destination and our stay was at the KSTDC Hotel Mayura Adilshahi .

There is a different thrill in a road trip. Halting at villages,having a cuppa of tea at the village tea stall,eating local delicacies at the dhaba and driving and halting as per your convenience . It is unmatched. And with Google Maps it's much more easier to locate a place. We drove via the Pune-Pandharpur route . The roads are pretty good but a small patch on the border of Maharastra & Karnataka is a bit rough.

Walking through the streets of Bijapur is like a historical walk. Old historical ruins exist amidst modern establishments , residential areas and crowded market places.

Gol Gumbaz the famous monument associated with Bijapur is not just the only monument in this city.There are also other monuments which are a must see. They can be easily explored by autorickshaws which ply in the city.

Gol Gumbaz : The iconic monument associated with Bijapur. Gol Gumbaz( meaning the Circular Dome ) built in the 17 th century is considered to be the World's largest dome next to St Peter's Basilica at the Vatican. It has the mausoleum of Mohd Adil Shah, the 7th ruler of the Adil Shahi dynasty. and is very impressive with four lofty seven storeyed minarets on each side As you enter the hall on a raised platform in the center are the replica tombs of the ruler and his family. The actual tombs lie below in a crypt.

The tomb of Mohammed Adil Shah 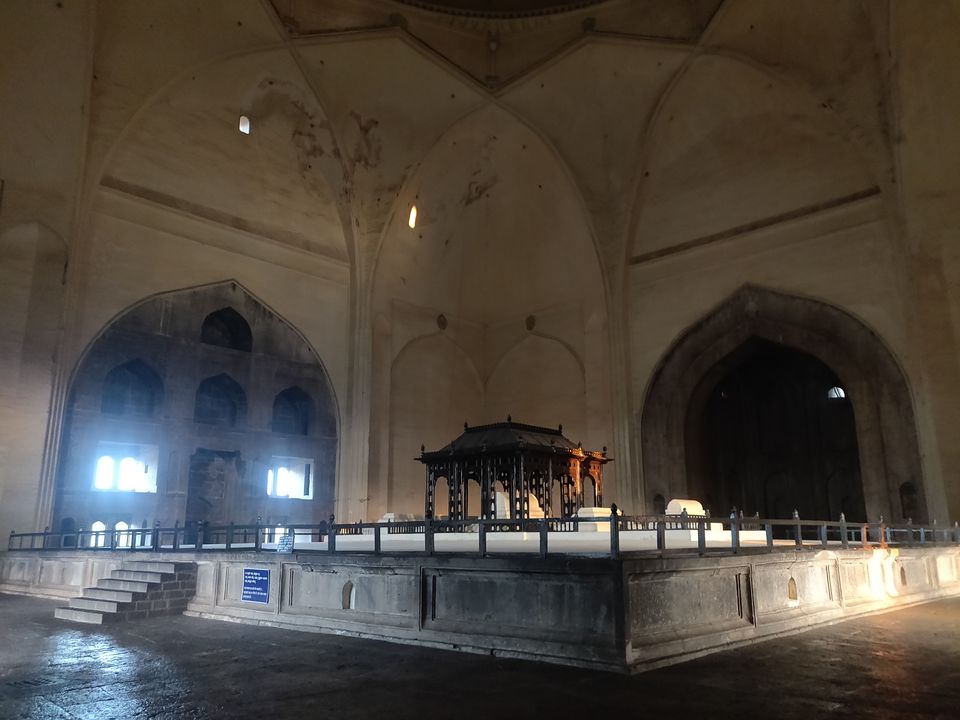 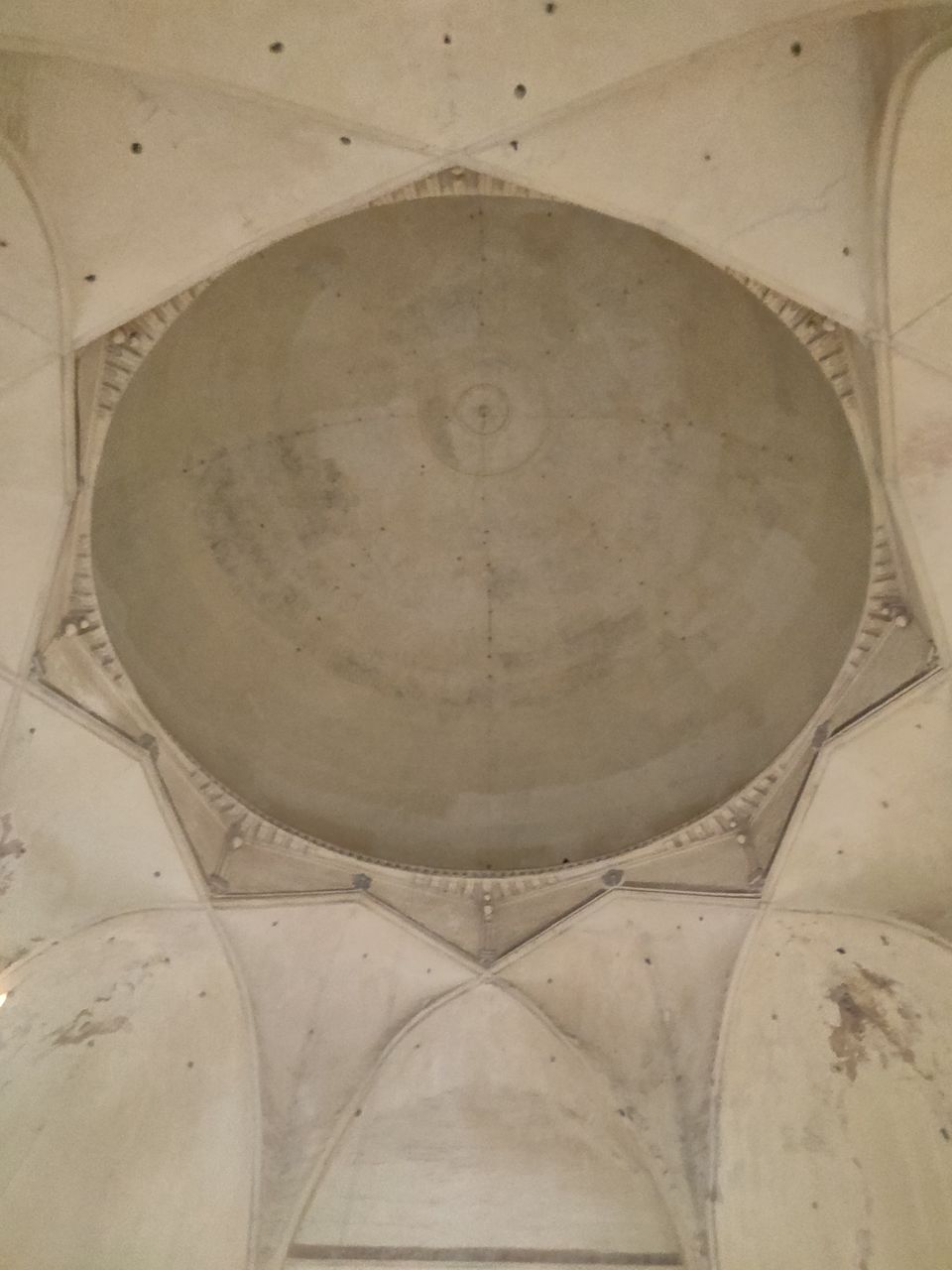 Ibrahim Rouza : is a exquisite group of two monuments namely a mausoleum of Ibrahim Adil Shah & a mosque . The monuments are built on a high raised terrace and adorned by slender minarets on each corner .

The first view of the Ibrahim Rouza complex 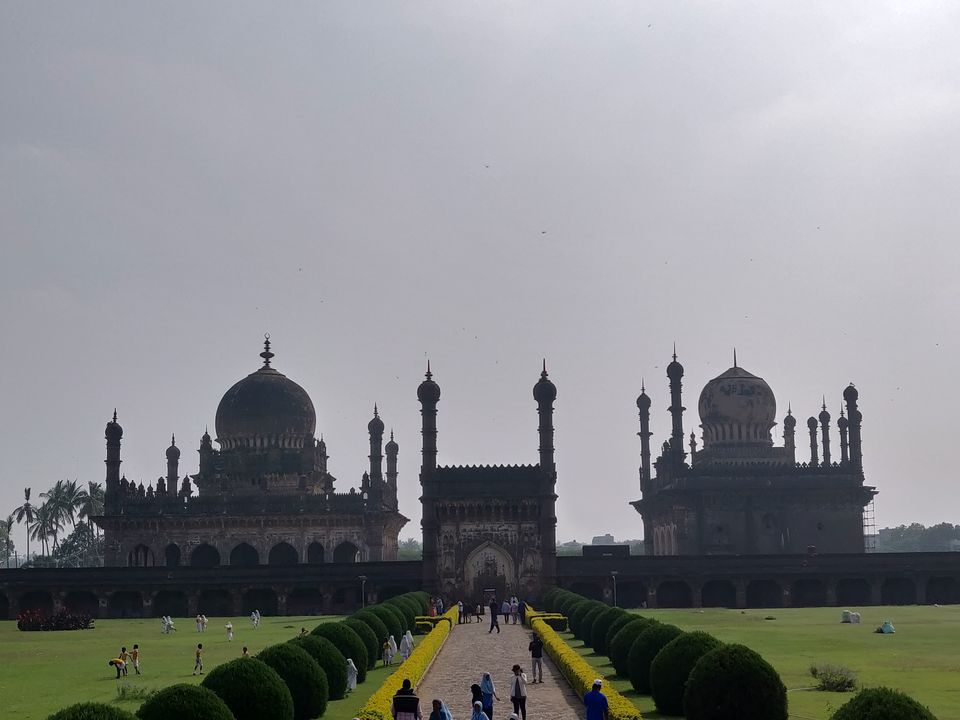 Bara Kaman : Bara Kaman ( 12 arches )a large roofless monument is quite hidden in the bylanes of the busy market place of Bijapur city. We almost missed it and had to ask for directions from the locals . It is a unfinished mausoleum of Ali Adil Shah II who had started building it as a burial mausoleum for himself and his wives but could never be completed in his lifetime. It is built on a raised platform and has the tomb of Ali Adil Shah II and his family members .

Gagan Mahal : This is quite close to the Bara Kaman at a walking distance. Gagan Mahal was supposed to be the Durbar Hall, palaces and pleasure gardens of the Adil Shahi Rulers. But it is in ruins now and serves as a public garden 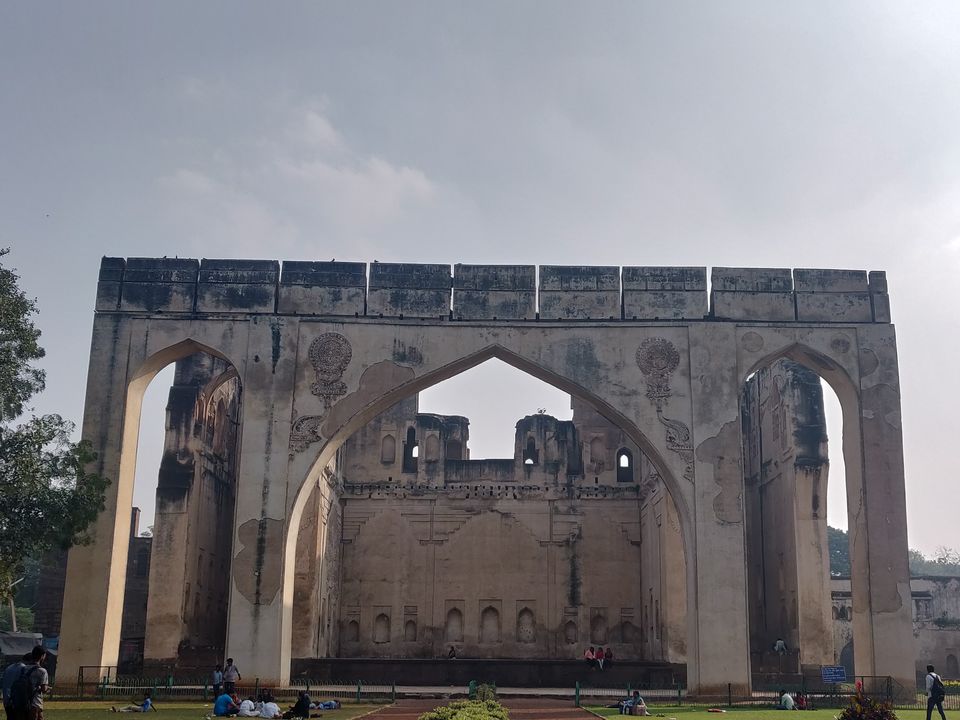 Malik-e-Maidan : A little ahead is the Malik-e-Maidan or the Sher-A-Burz . In the tower lies the 4 mtrs long and 55 ton cannon cast in gun metal . It is said to the largest medieval cannon in the world. The cannon's nozzle is fashioned into the shape of a lion's head with open jaws & between the carved fangs is depicted an elephant being crushed to death

The tower which has the Cannon

The muzzle in the shape of a lion devouring an elephant

Inscriptions in Arabic on the top of the canon

Upali Burz : Just opposite the Malik-e-Maidan is the Upali Burz a watch tower built during 1584. It is a 80 feet tower and formed a part of the military defence of Vijayapura. There are 70 stone steps which are quite high. But the trek to the top is worth it. We can view the Bijapur city from here

Jod Gumbaz : The twin domes of 2 tombs of the army personnel of the Adil Shahi force.

You have to climb the seven storey minarets ( the entrance of the minarets is inside the main hall ) to reach gallery around the Dome and the Whispering Gallery which is a circular gallery on the top but beneath the dome which is built in such a unique way that a slightest whisper gets amplified and can be heard on the other side of the gallery and if somebody claps the echo can be heard several times . 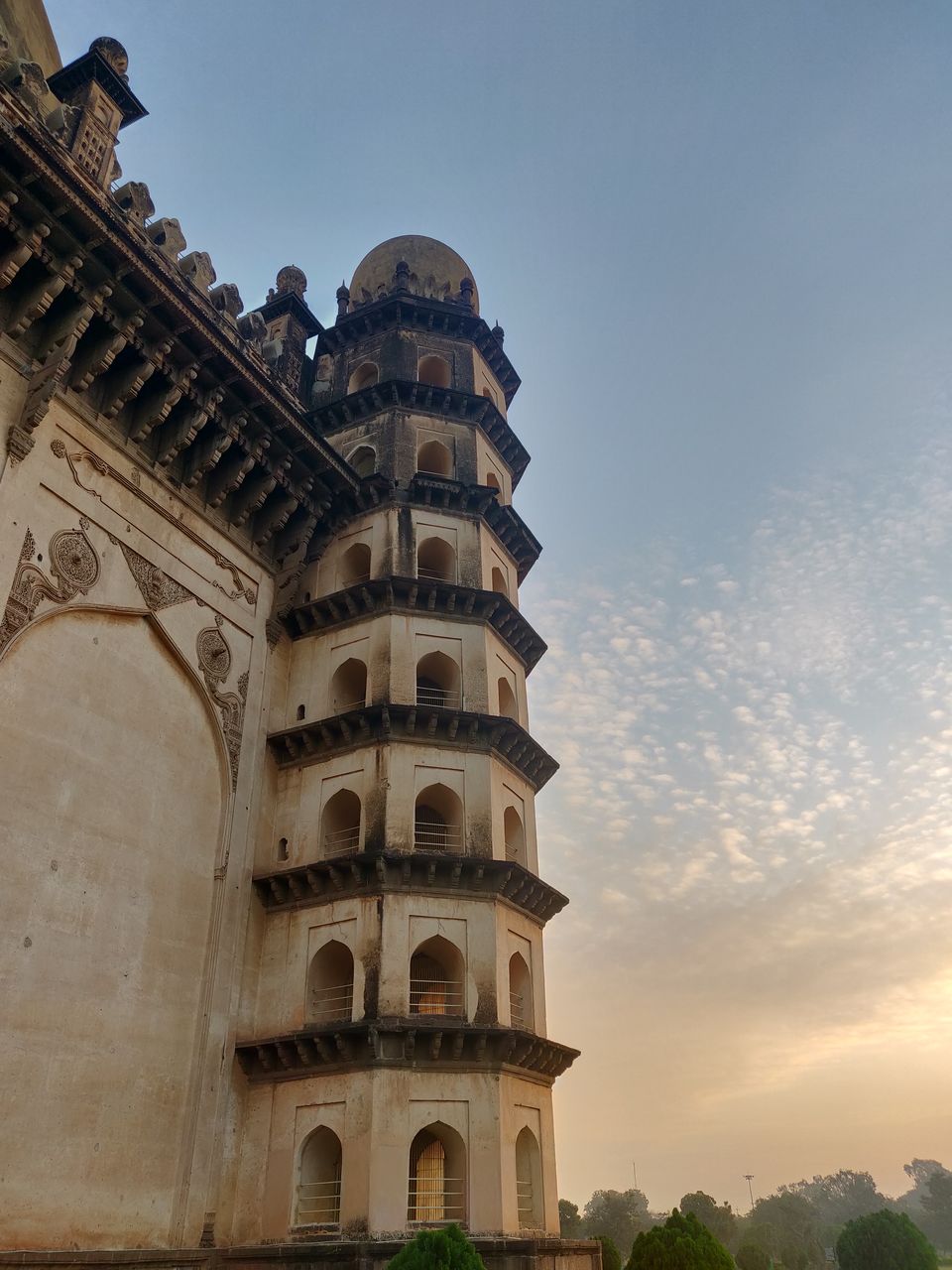 The steep stone steps to climb the Minaret 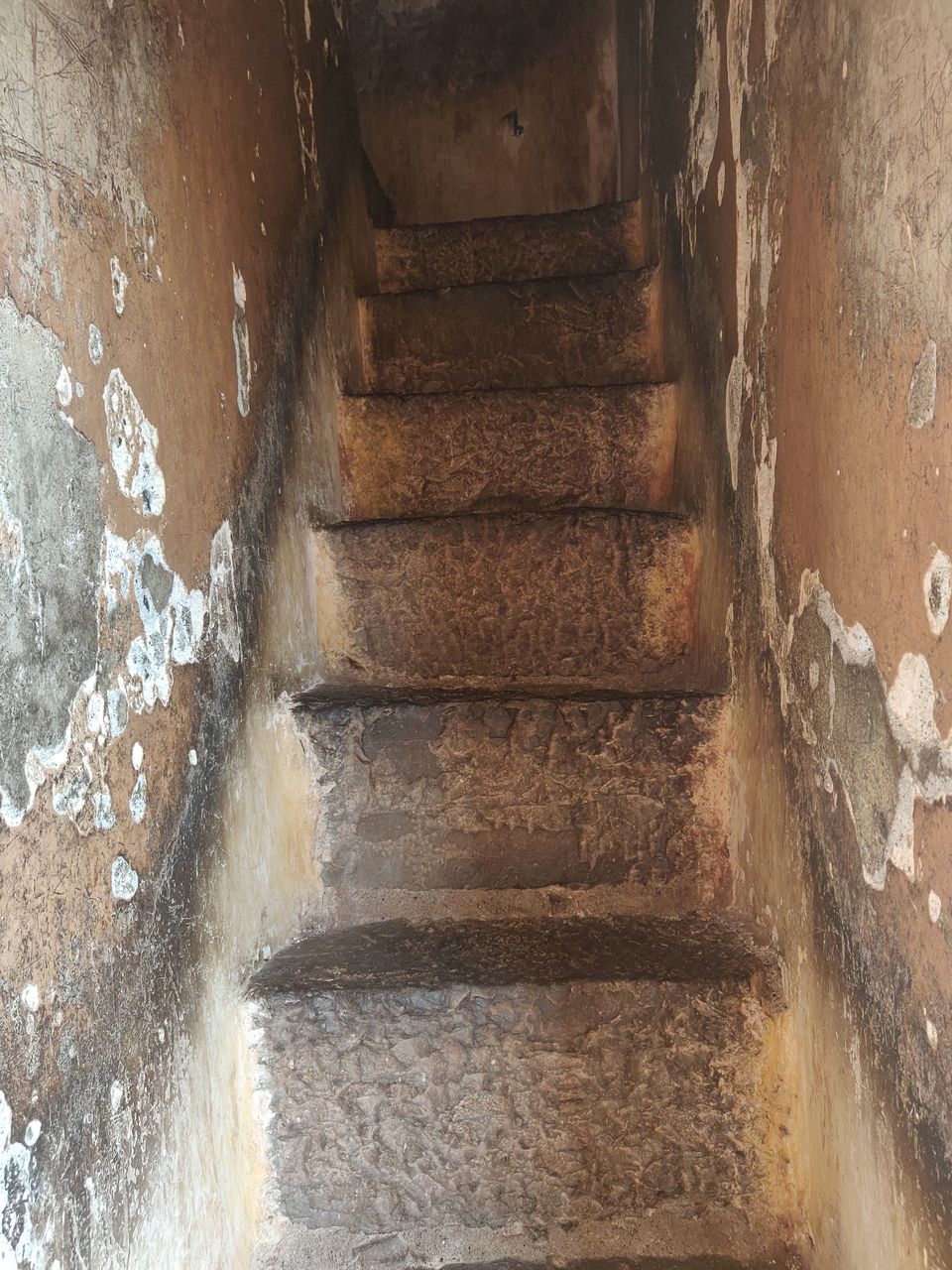 The landing after every storey of the Minaret 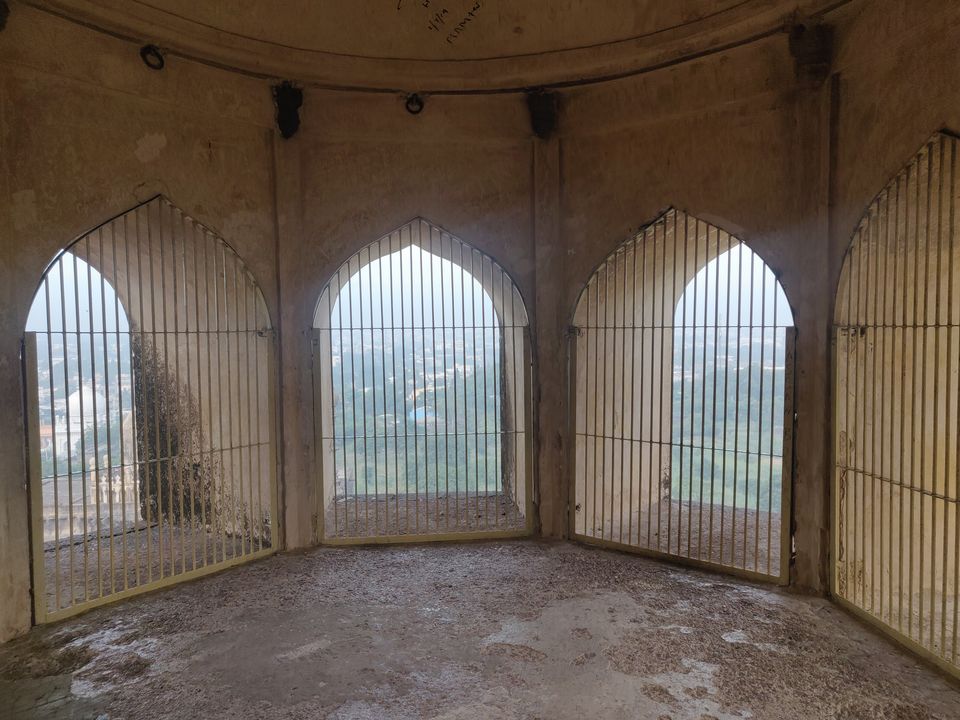 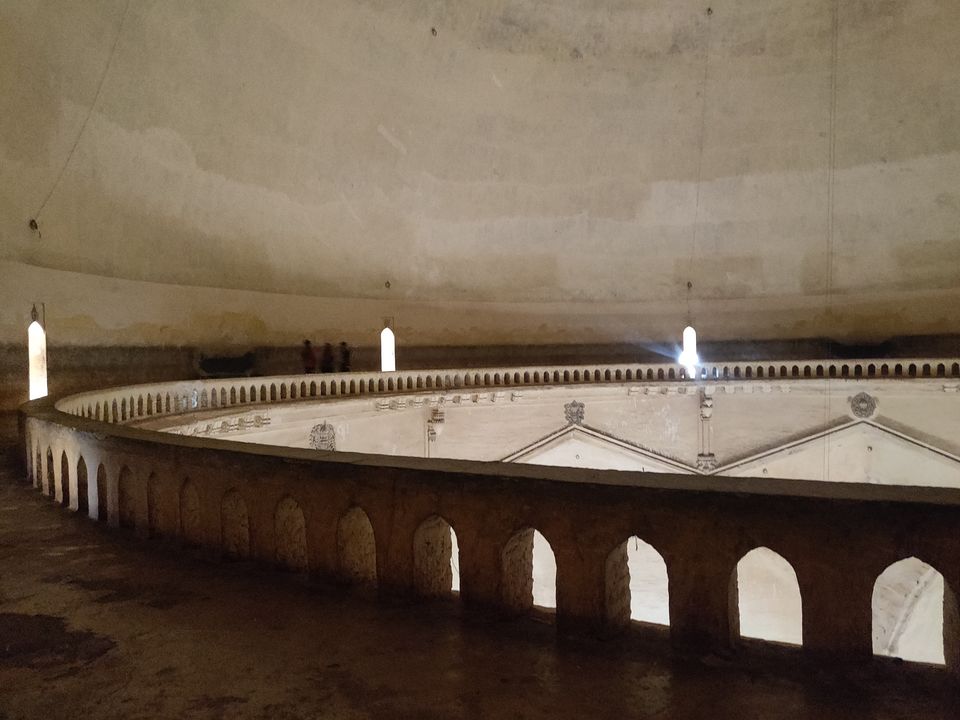 The Golden hues of the rising Sun falling on the Monument 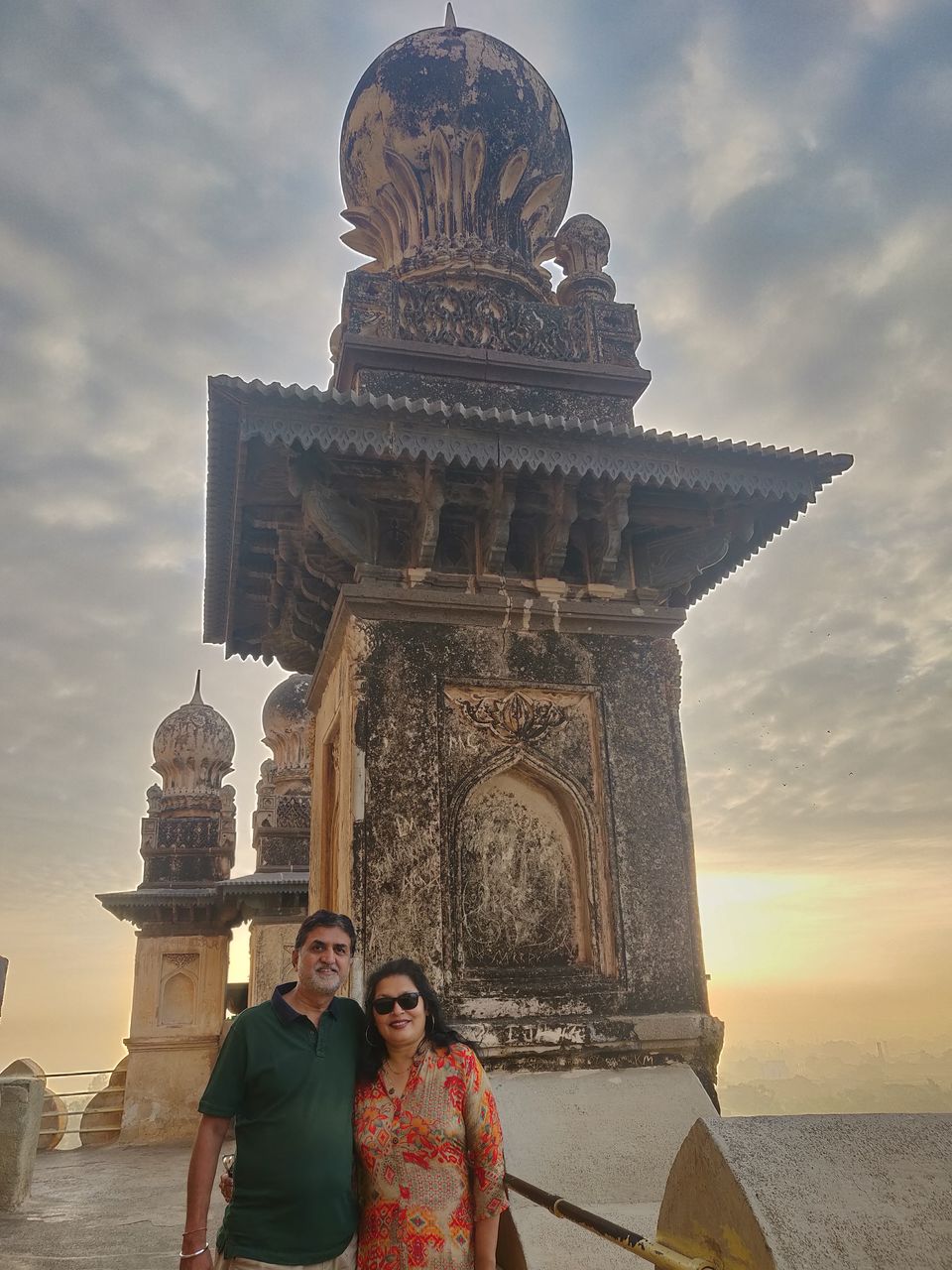 Beautiful carvings on the walls of the Gol Gumbaz 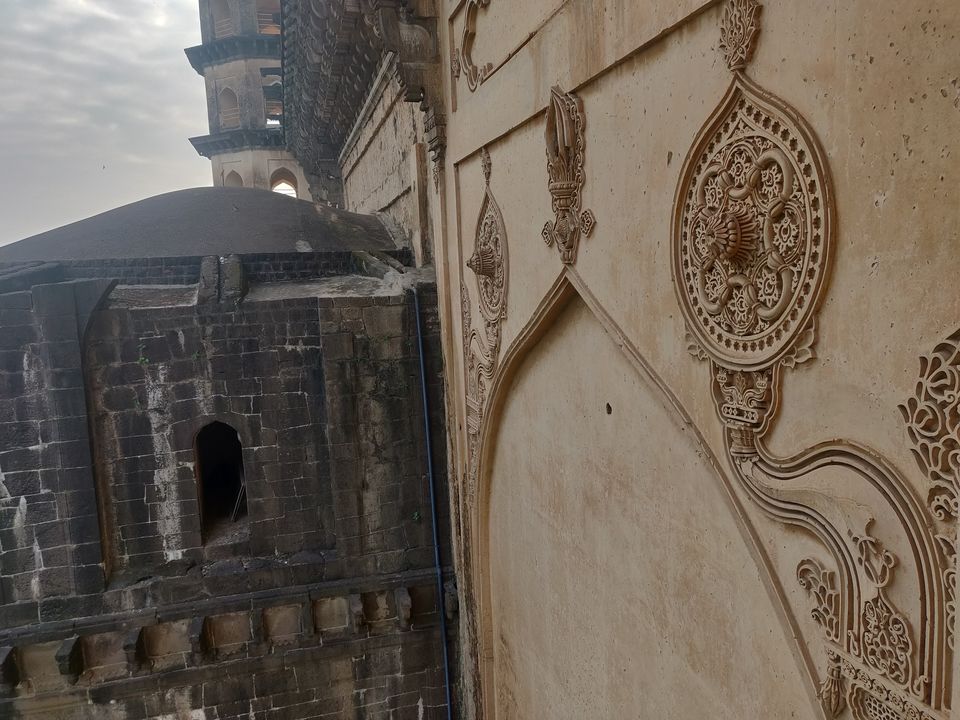 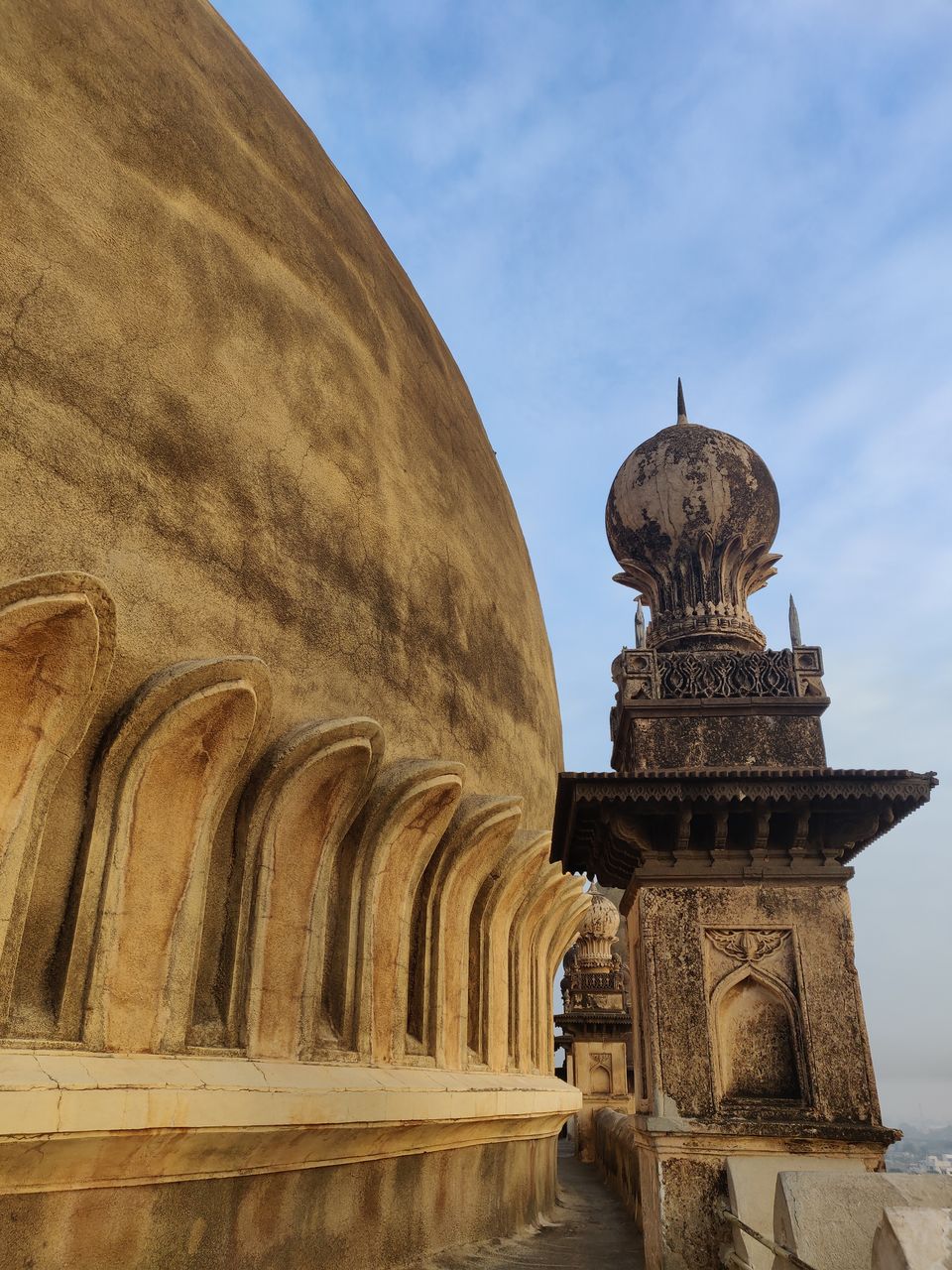 The petal shaped skirting of the Dome 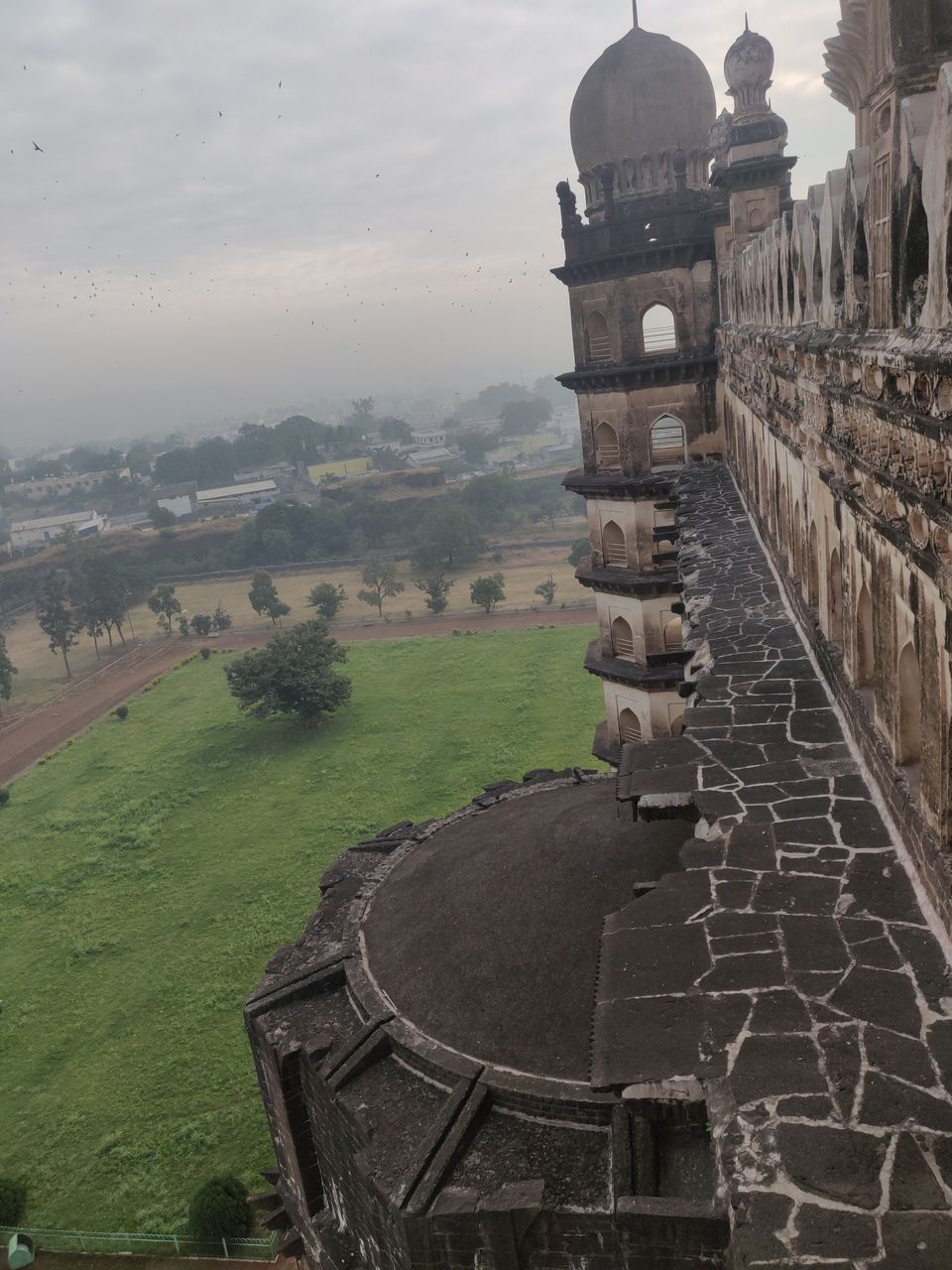 The Gol Gumbaz opens early for tourist viewing at 6 am and it is highly recommended to visit it as early as possible since later in the day it is quite crowded with tourists and school students hence the acoustics of the Whispering Gallery can't be experienced. We reached the Gumbaz at 6.30 am. There were hardly any tourists around so we could click good pics of the monument. There is a Archaeological musuem in the Gol Gumbaz complex but it opens at 9 am .

Sunrise view from top of the Gol Gumbaaz 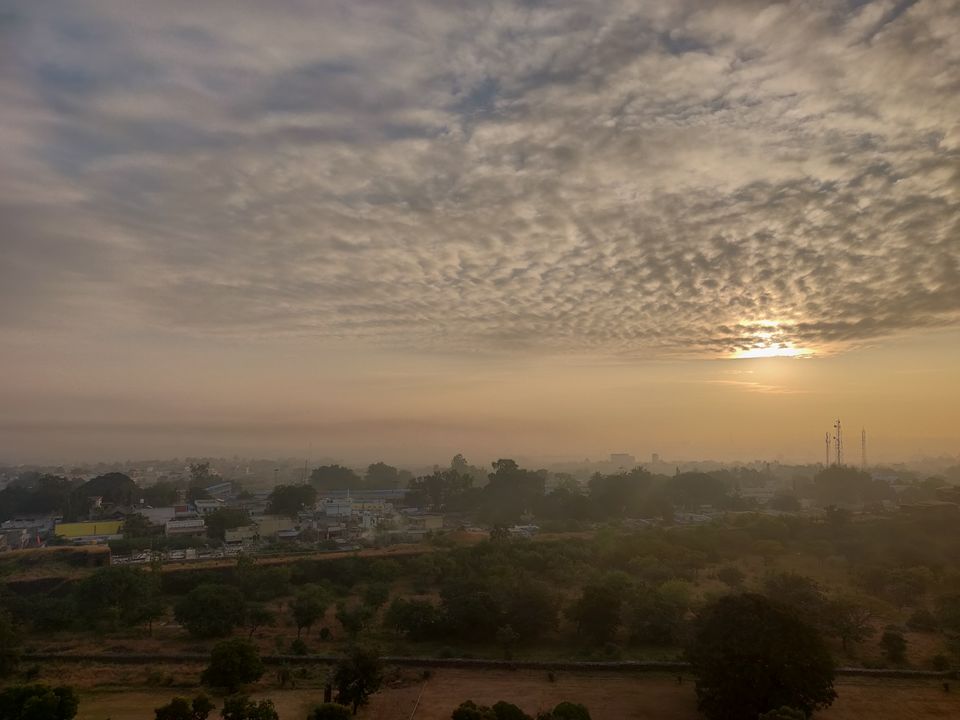 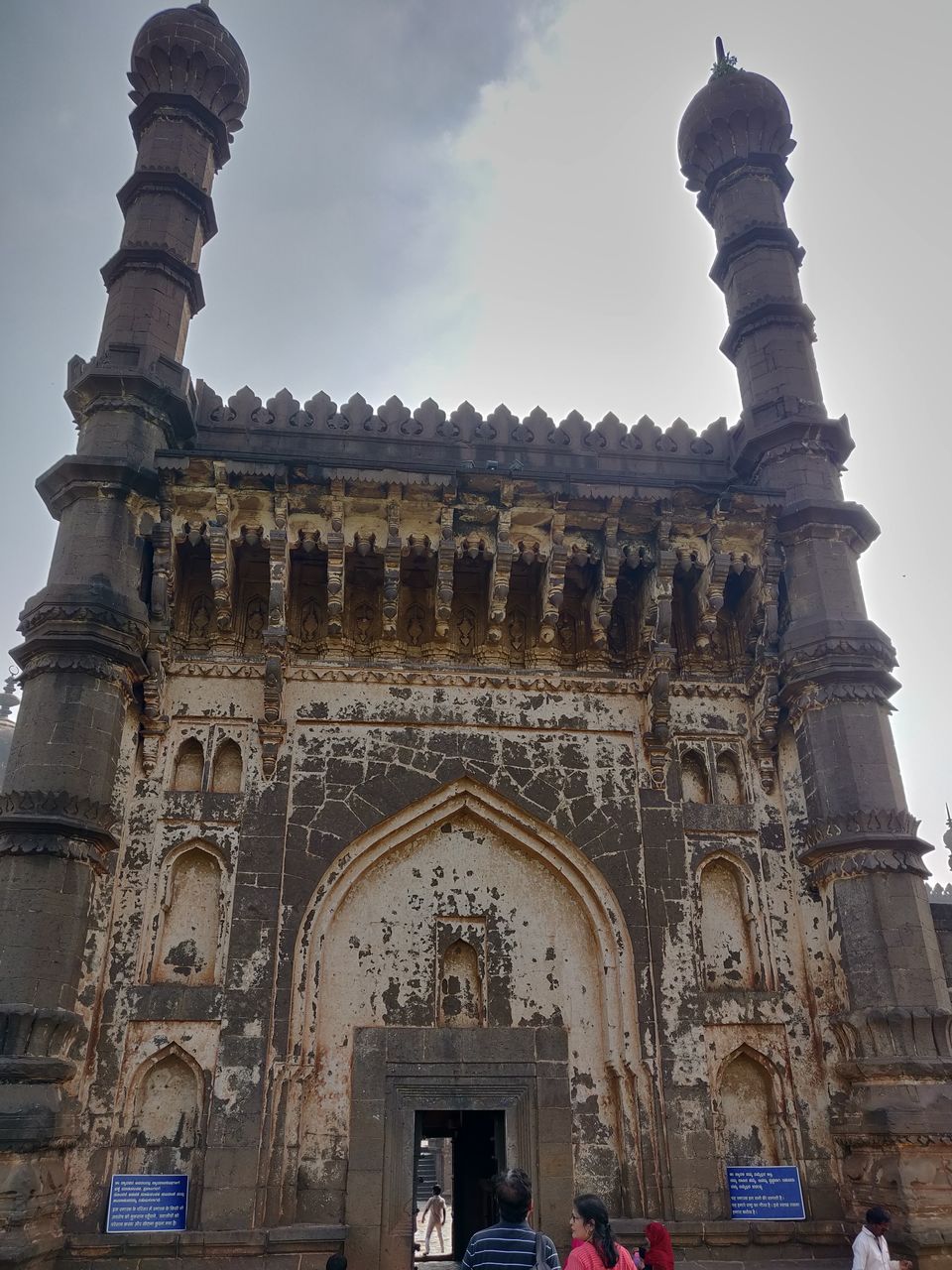 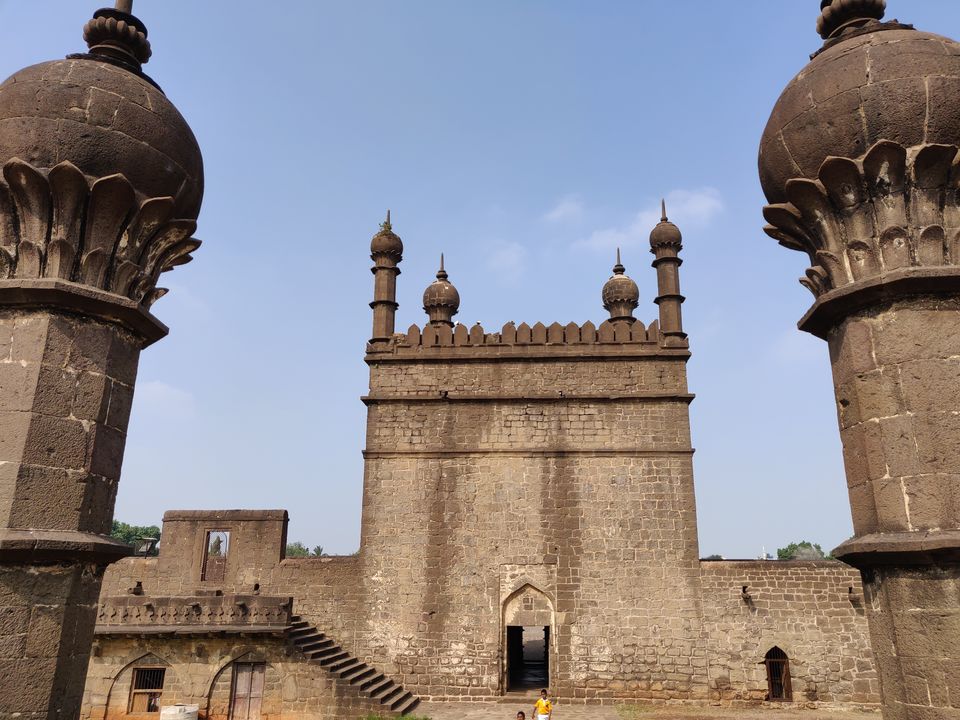 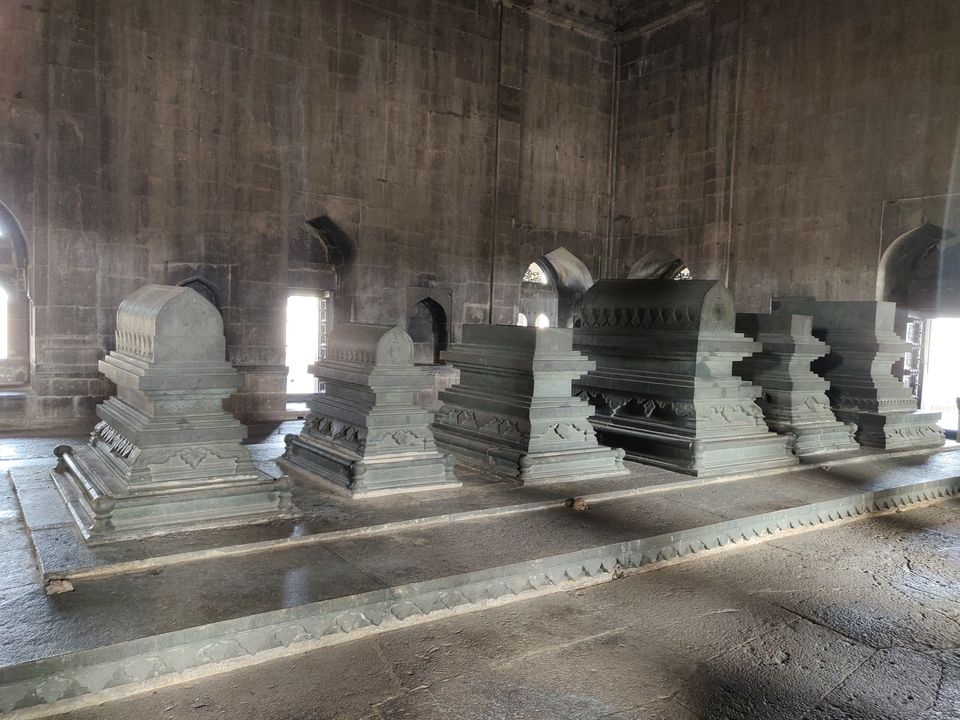 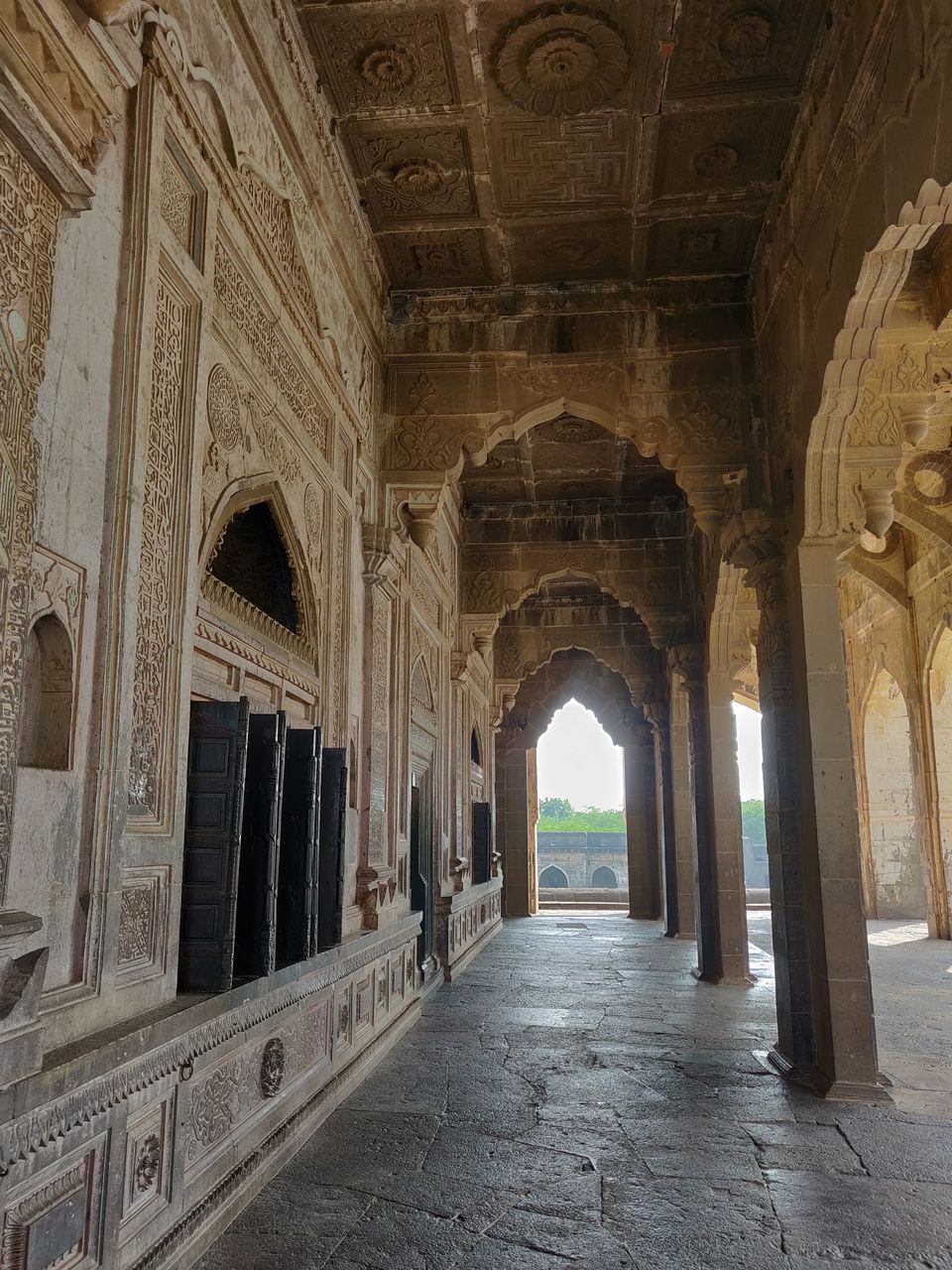 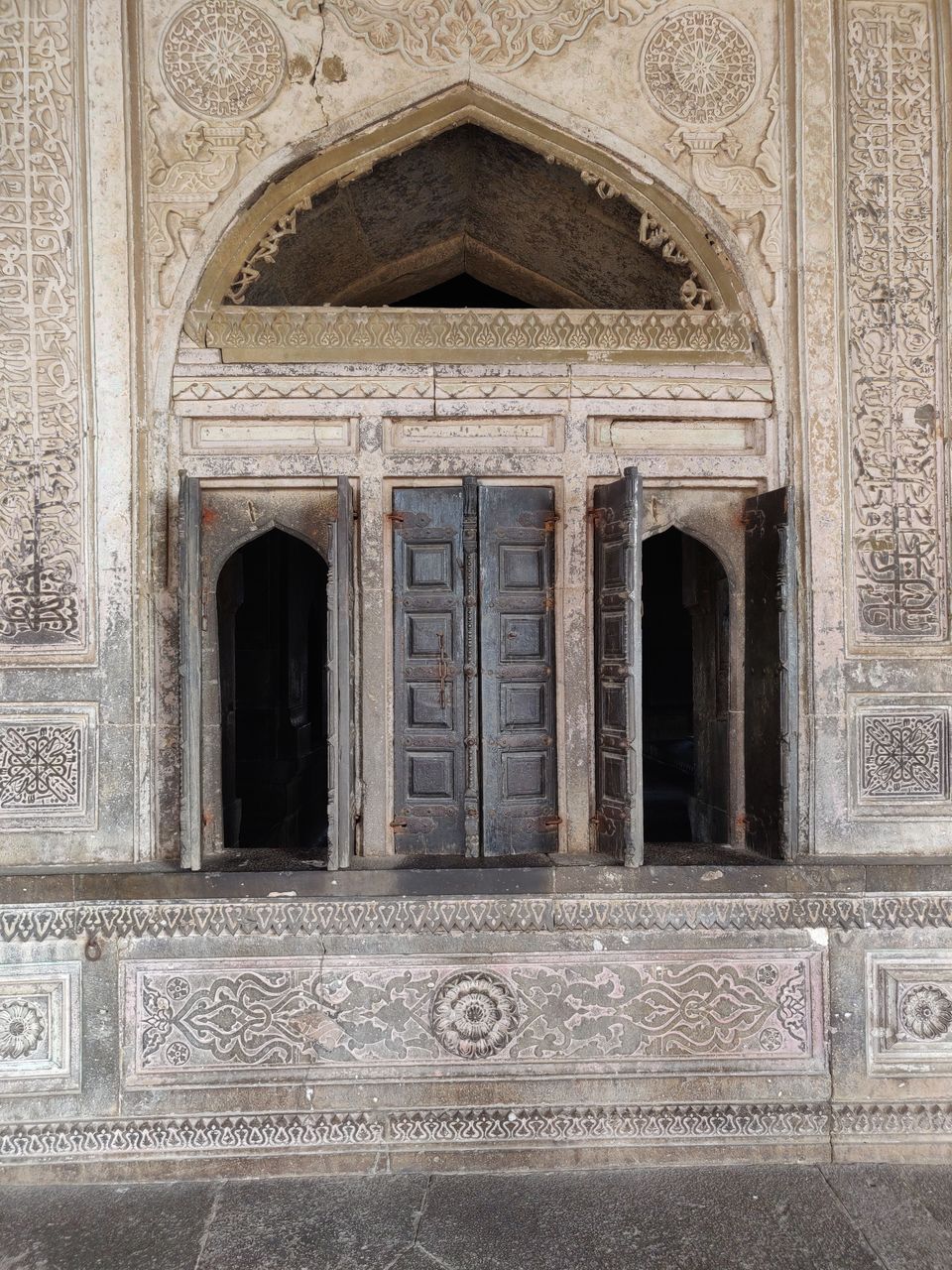 Delicate fililgree and carvings on the walls and pillars 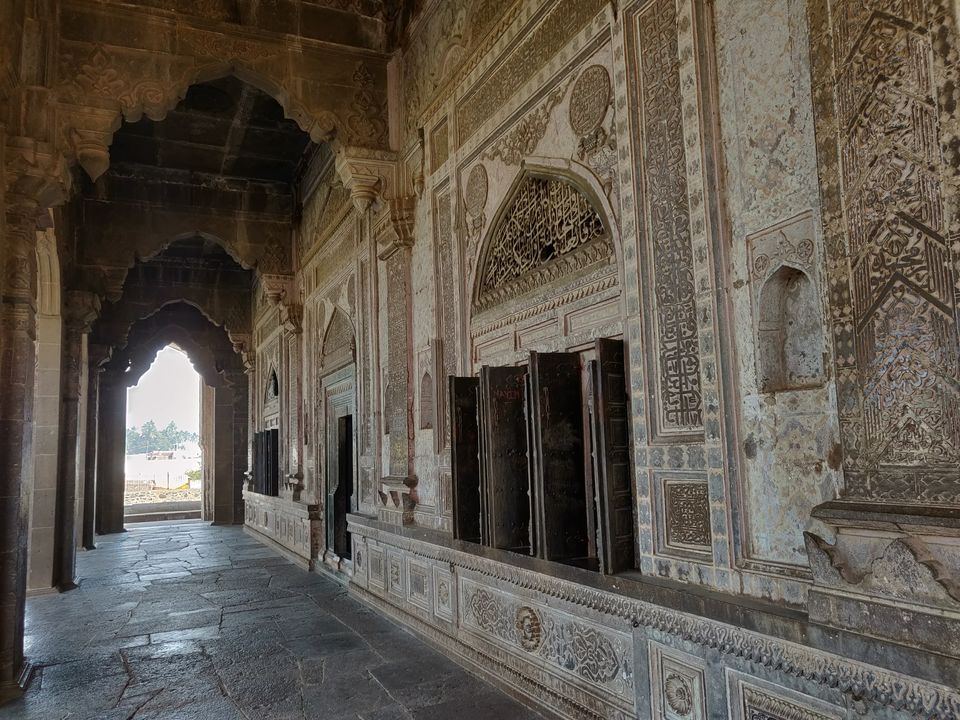 A fountain in between the Mausoleum & Mosque 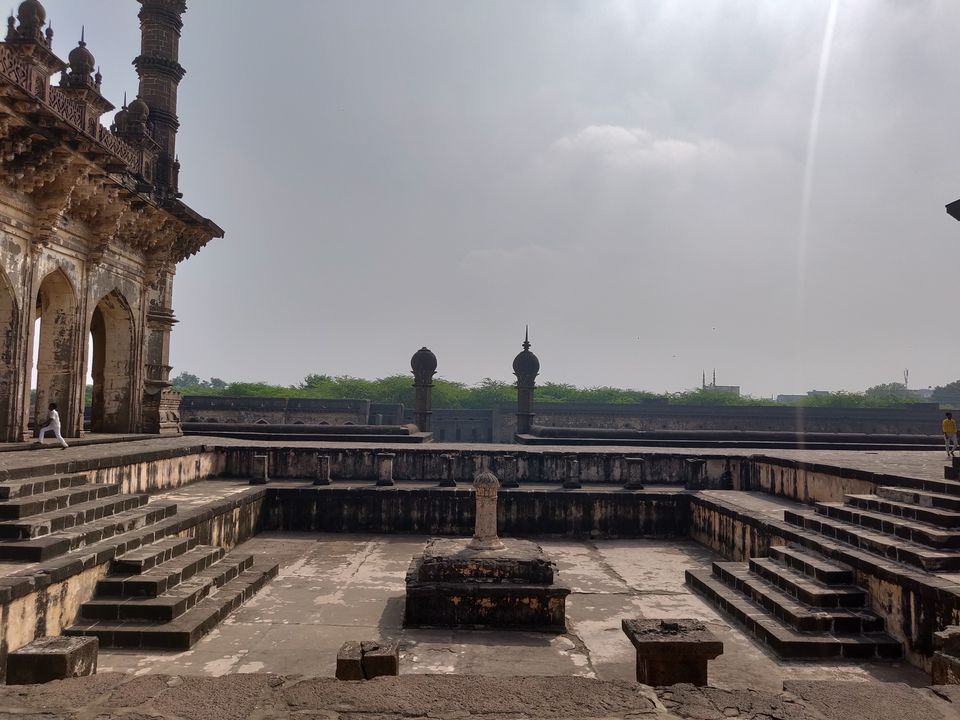 The mosque is also a beautiful edifice with five grand arches ornamented by carved medallions and hanging stone chains.

The mosque in the complex 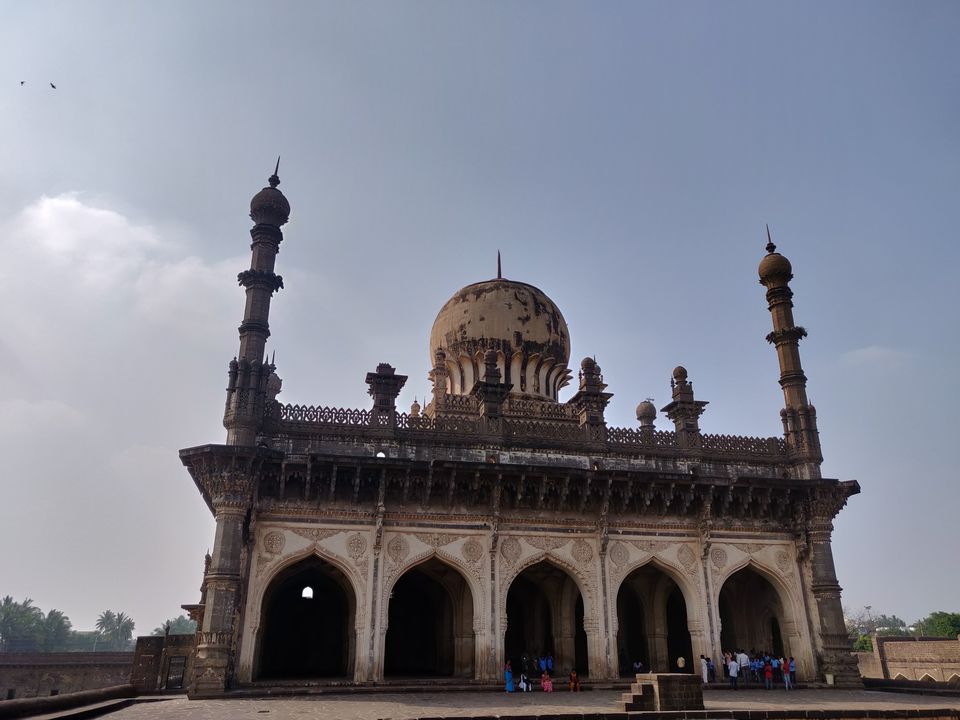 Mehtaj Mahal : is situated in the midst of a busy residential area in one part of Bijapur. It has a mosque 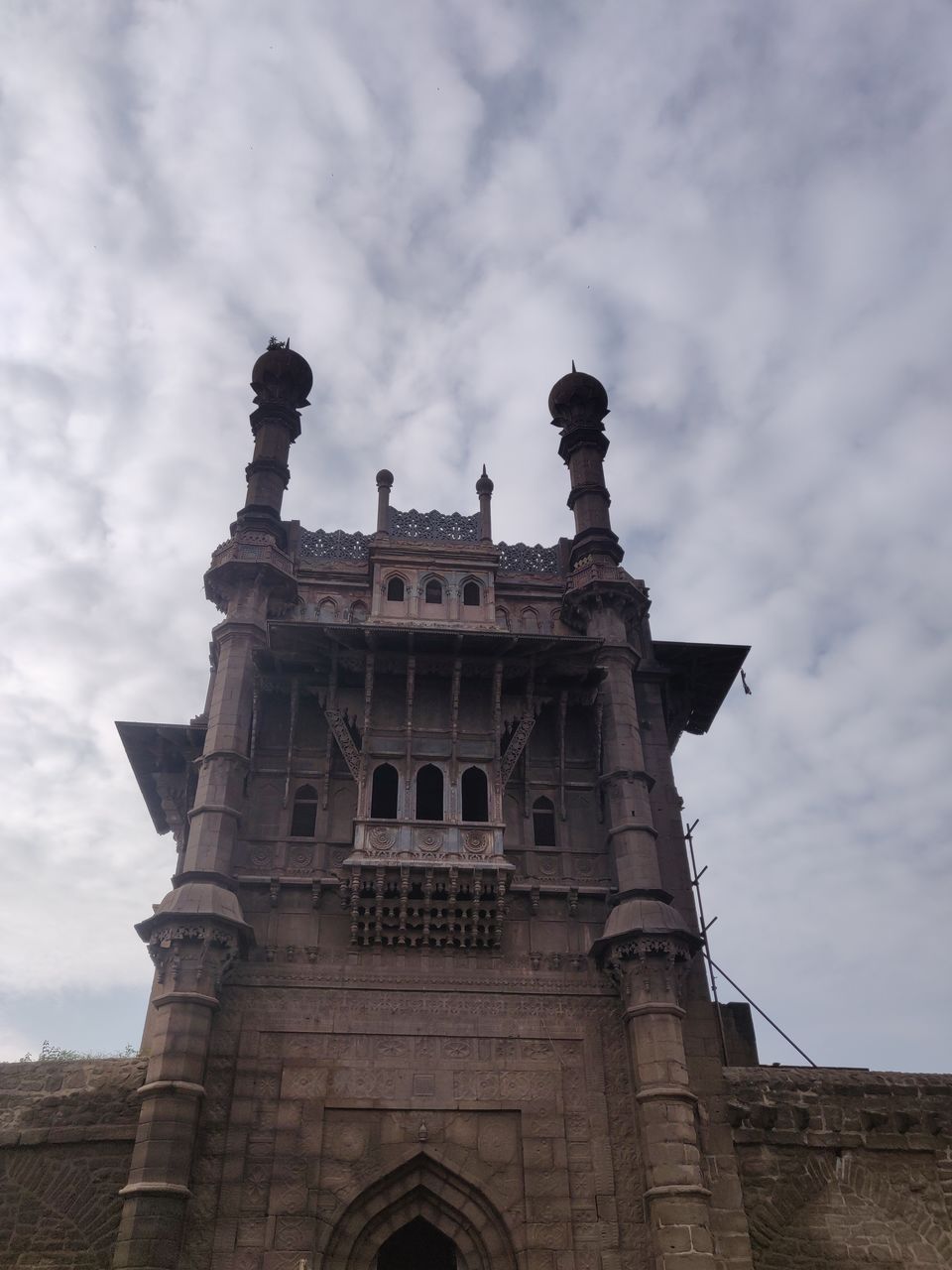 Jamia Masjid : A little ahead of Mehtar Mahal in a busy residential area is the Jamia Masjid which is one of the largest Mosque in India

From here we drove to the incredibly beautiful Aihole which was the experimenting ground for temple architecture. Do read my seperate blog on Aihole