Laxmi Vilas Palace at Vadodara: A royal heritage of the Gaekwads - Soul Esplanade 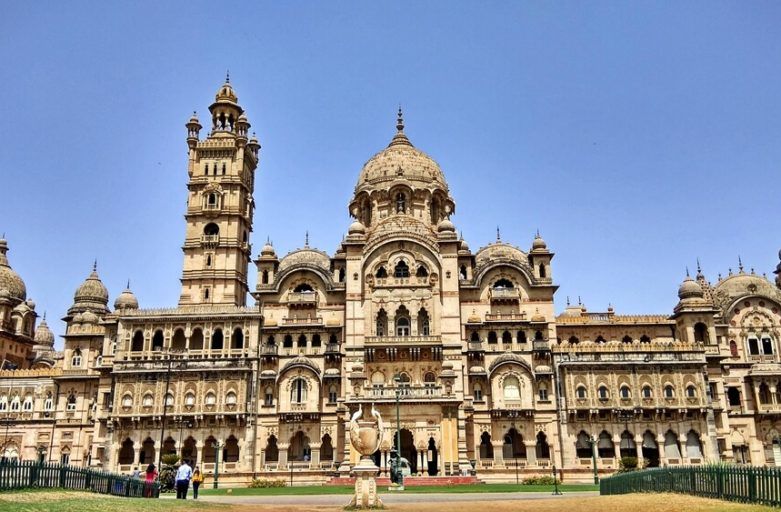 Think of any palace you have ever visited, how would you describe them? mesmerizingly elegant, royal, absurdly gigantic, an epitome of history and legacy. Now, what do they all have in common? a regal durbar, an ostentatious collection of jewels, an intimidating armoury, paintings. The Laxmi Vilas Palace has all these as well. So is it just another palace, there is certainly no dearth of them in India, or is it different and if so how. Now let me introduce the Laxmi Vilas Palace of Vadodara, erstwhile Baroda - every palace is gigantic but not all are four times larger than the Buckingham Palace, all palaces have paintings but not all have paintings of Raja Ravi Verma, perhaps the best painter of his time, all palaces have manicured lawns and gardens but not all have golf courses in them and all palaces have symmetrical domes, minarets, and towers but how many have you seen that defies symmetry yet mesmerizingly beautiful. This is Laxmi Vilas Palace, the royal heritage of the Gaekwad dynasty.

It was a sweltering summer morning. While waiting for my bus to Vadodara, I made a full day itinerary for myself. It went like this - Ahmedabad - Vadodara - Chapaner, along with the list of places to visit there. I had no clue about transportation facilities from Vadodara to Chapaner so there were a lot of contingencies in that list including a possibility of an overnight stay at Vadodara. The weather provided the least encouragement but then I am used to such excruciating days of travel and such days always end with nice experiences and great stories, so I was up for it. Just to beat the heat and add some time to my compact itinerary, I boarded the first Volvo bus to Vadodara that I came across (they keep coming in every 30 mins) without having a proper breakfast. That's violation of rule number 1 of travelling - never compromise on food and keep yourself hydrated. I reached Vadodara in 2 hours. The moment I stepped out of the AC bus, the weather hit me again and in no time, I was drenched from head to toe in sweat. I had breakfast in a nearby joint and filled my water bottle, added some glucose to it and I was ready to start my day. I booked a cab to the Laxmi Vilas place and on the way, as it happens most of the time when you tell the cab driver that you are in the city to visit and see places, you get a good dose of history from the cab drivers who narrate it with pride. I reached Gate number 2 of the Laxmi Vilas Palace. Here I had to enter my details and sign on the visitors' register after which I walked to the ticket counter and bought the entry tickets. Next step is to collect the audio guide which is free, available in multiple languages and helps in an informative tour of the palace. The audio guide is a must, without that you would miss out on lots of facts and legends associated with the palace and the Gaekwad rulers. 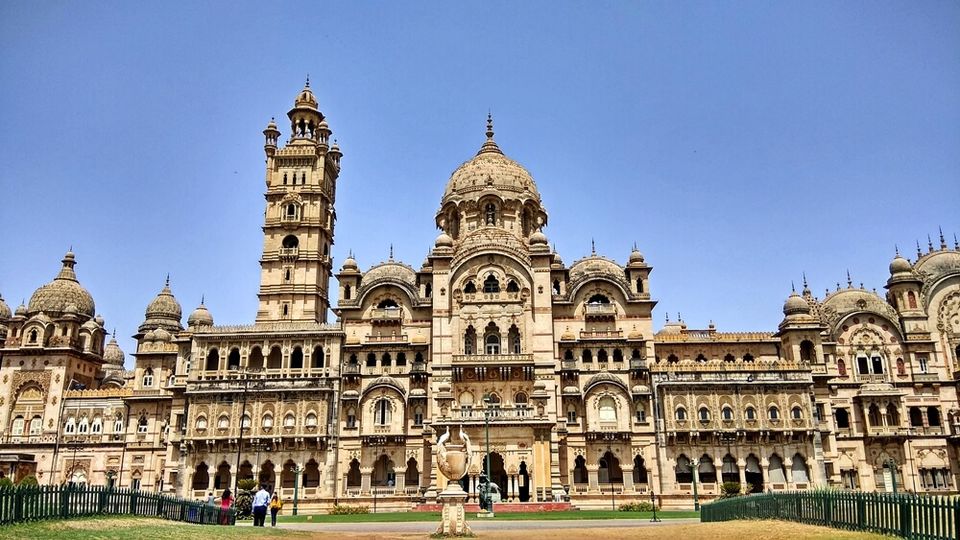 Laxmi Vilas Palace is an extravagant and gigantic palace commissioned by Maharaja Sayajirao Gaekwad in 1890. Build over 700 acres and with its own golf course, the palace premise is about four times as large as the Buckingham Palace of Great Britain. The Indo-Saracenic architecture of the palace is marked by lattice windows, bulbous domes and a clock tower. As I entered the palace through the sculpted marble archways, the audio guide informed that the palace was constructed using white marbles imported from Italy and sandstones from Agra. On entering, there are two bronze statues - one of a Brahman and the other a musician. Further, there are intricately carved bust statues of the Maharaja and the Maharani in the hallway. The statues are so meticulously carved that you can see the pearl string of the queen behind the folds of her sari.

On the right of the hallway, is the Pratap Shastragar, the royal armoury. It has an extensive collection of swords, gem-studded shields, riffles, etc. The most prominent among all is the Navadurga sword - a sword with 9 incarnations of Goddess Durga engraved on it. It is flanked by bronze statues to Shivaji and Maharana Pratap - both highly regarded for their bravery and war skills. Other important items are the ivory sword of Aurangzeb and swords of Sikh saint Shri Guru Gobind Singhji. Adjacent to Pratap Shastragar is the coronation hall. It is regarded as a sacred place so visitors are required to remove their footwear before entering it. The hall has few paintings of the erstwhile members of the royal family and that of some Hindu gods and goddesses painted by Raja Ravi Verma. In the centre, is a rather modest gaddi or the royal seat. This hall is used for ceremonial activities. 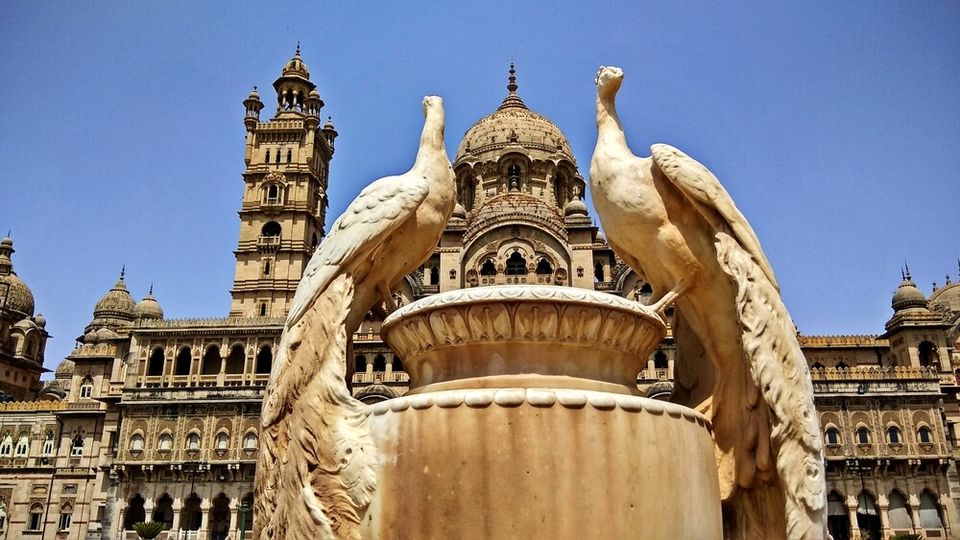 Next, visitors are required to walk through the corridors to the opposite end of the palace where the Hathi hall is situated. This hall has an elaborate collection of headgears or pagdis of different regions of India including those from the Rajasthan, Gujarat, Pune region and few tribal headgears as well. The incumbent king is an enthusiast and expert of headgears. Next to this hall is the durbar hall. It is at this place that all functions were held and is also the place for the public audience of the king. The upper tiers of this hall have lattice sandalwood screens behind which women from the royal family used to watch the performances held in the durbar hall. The hall has stained glass panels depicting various epics of Hindu mythology. Then there is a painting of the royal insignia and bust statues of nobles and ministers of the court. The audio guide tour ends here and the visitors are required to submit them at the counter.

Outside the palace are the founding and the completion stone of the palace and a colourful painting. There is a 300 foot high tower in the palace which initially had a clock in it but it was subsequently removed because of the continuous ticking sound that it made. Photography is strictly prohibited inside the palace but visitors are allowed to click pictures of the palace from outside using their mobile phones but not digital cameras - a rather bizarre rule. I clicked a few photographs of the palace but courtesy the horrible front camera of my mobile, I couldn't take a good picture of myself with the palace. Anyway, the experience and memories matter more than the pictures so no regrets. I must say I loved being at the opulent Laxmi Vilas Palace. The real beauty of the palace lies in watching it from a distance as one single massive yet magnificent structure. The last few decades saw some courtroom drama and legal battles fought among the members of the royal family surrounding property inheritance but its all settled now. 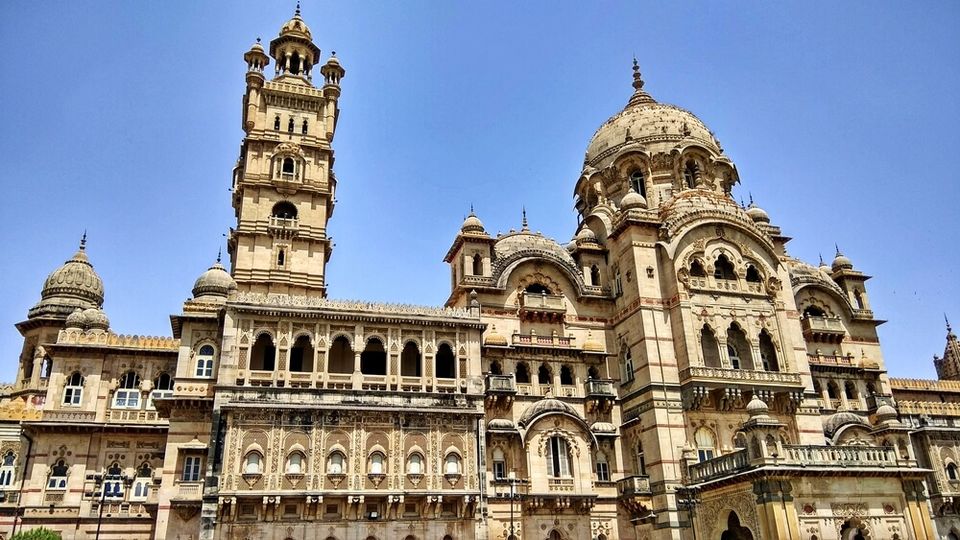 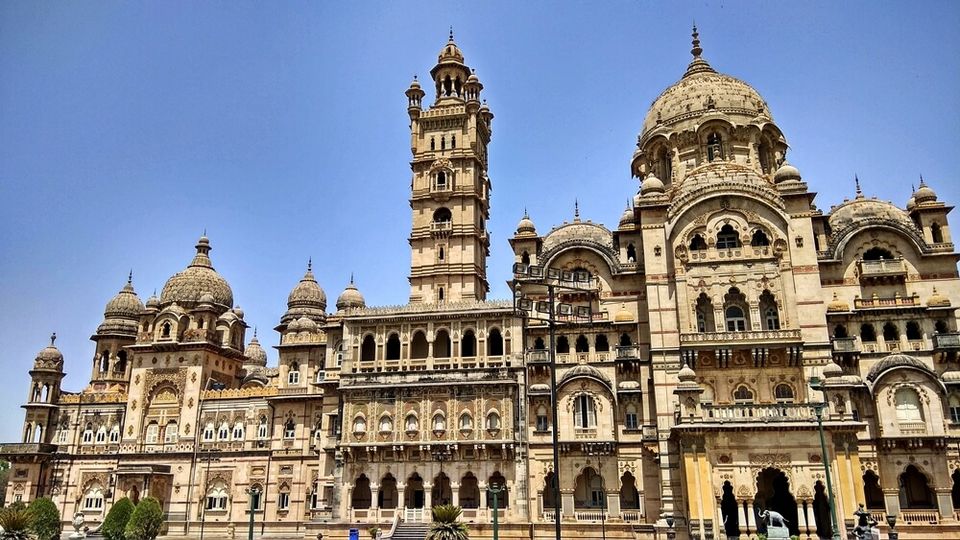 After spending a little more than 2 hours in the palace, I went to the Maharaja Fateh Singh Museum. This museum is in all regards just an extension of the Laxmi Vilas Palace and is actually situated within the palace complex itself albeit the entry is from a different end. The museum is connected by a winding road and it takes an unnecessarily long and exhausting walk to reach the museum. The excruciating summer made it even more difficult for me. After paying the hefty entry fees at the Laxmi Vilas Palace an additional 80 rupee entry fee for the museum (add 30 rupees more to that for the audio guide) seemed unjust given that all the items in the museum are actually collections of the Gaekwad family itself and could have easily been added to a gallery within the palace without creating a separate museum for it and charging for it separately to the visitors. 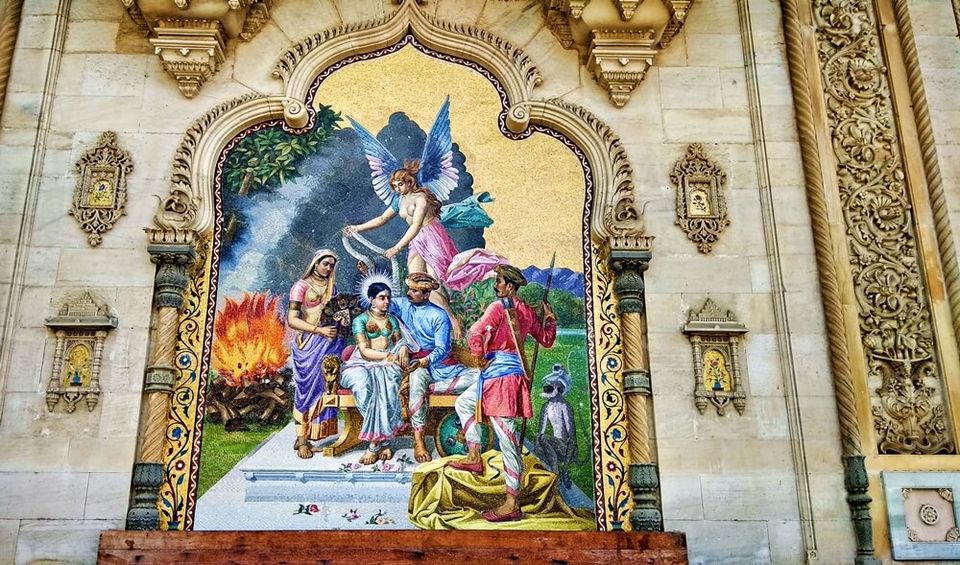 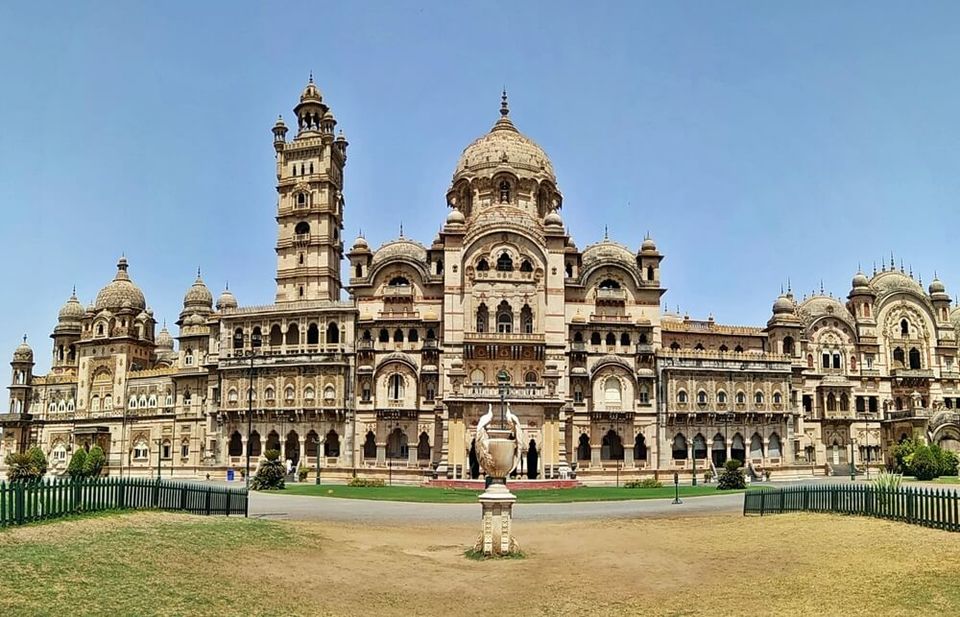 Its a 2 storied museum and there are few art galleries within it. There is a grand showcase of porcelain works from China, Japan, Europe etc and paintings by renowned European and Indian artists. However, most of the statues and paintings on display are actually replicas. The only gallery that made the entry charges and pain of walking to the museum worth it for was the Raja Ravi Verma gallery which had original paintings and all of them were absolutely stunning. Watching the life-sized paintings by Raja Ravi Verma and comparing it with the paintings by other iconic painters like Titian one has to acknowledge that Ravi Verma's paintings are far superior and perhaps the world has not given the legendary Indian painter the recognition he deserves. There is nothing much to see here and unless you want to see the mesmerizing paintings of Ravi Verma, you can skip this place.

By the time I completed exploring the palace and the museum, I was already far behind the schedule I planned at the Ahmedabad bus stop and visiting Chapaner-Pavagadh seemed infeasible. However, it being a UNESCO World Heritage site, I didn't want to miss out on it. Sunset is delayed in the western part of the country and you get about an hour of extra daylight here than the eastern part. So I decided to take try my luck and see if I could just pull it off. However, that meant skipping proper lunch and sustaining on fruit juices and dry cakes - never a good idea while travelling. Read more about the Chapaner trip here : Roaming amidst the Chapaner ruins - a day full of struggles

If you are enthusiastic about regal heritage, royal structures & artifacts and being in such places fills you with visceral pride, you will absolutely love the Laxmi Vilas Palace. I hope you liked this post. Please share your own experiences of Baroda and feedback on this post in the comments section below. Travel & Spread Love...