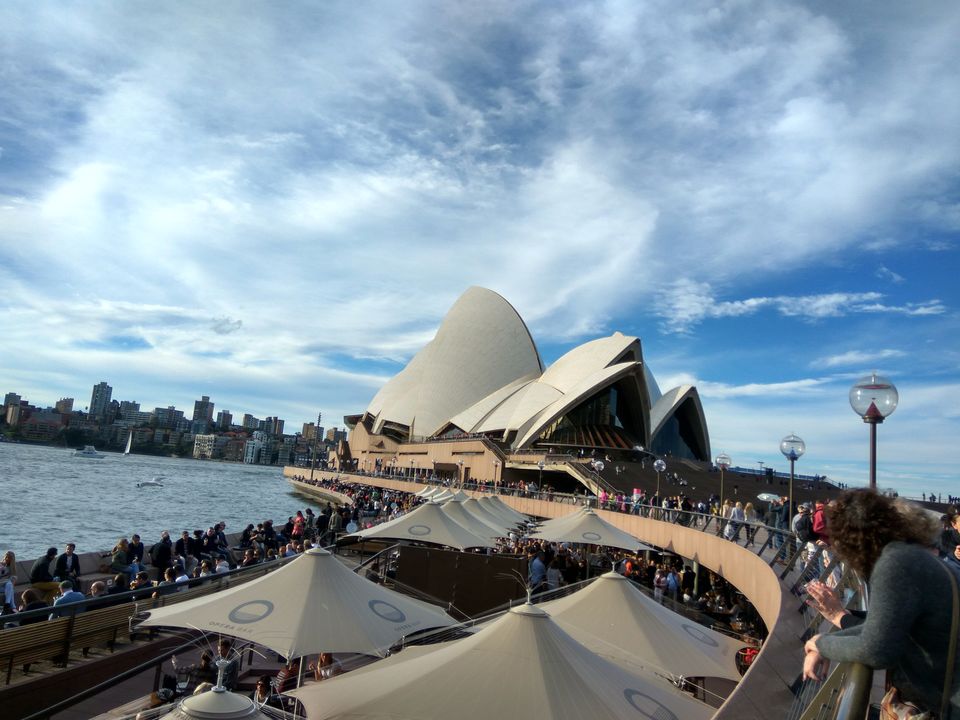 Two-thirds of it is desert and it is one of the driest inhabited continent on earth.

2. Driving across distances are long and empty:

Sydney to Melbourne is a 9-hour long drive. But look closely and you’ll see a lot of wildlife. In one of our trips from Sydney to Canberra, we could barely see any cars on the way, which was shocking for me.

3. Most of Australia’s exotic flora and fauna are not found anywhere else in the world.

4. Why are Blue Mountains Blue?

The sight of the blue haze from the eucalyptus oil arising from the bush in the mountain ranges west of Sydney gave the Blue Mountains their name.

5. Australia is a huge sporting nation.

Soccer.Cricket. Rugby. Aussies take their sport very seriously and it is very common to find Aussies being up for a late night game.

Do look up some cost effective tips before going.

7. Kangaroos and emus can’t walk backwards which is why they are on the coat of arms.

But,interestingly, Australia is the only place where people can legally eat the animals on it's Coat of Arms.

Aussies shorten most words, have colorful slang terms and love to use a lot of rhyming slang. We had a 3 year-old kid in the house. So, I thought we were speaking his language. Turns out the entire country was speaking here language. Here is a list of few words you should know for the ease of understanding:

I reckon = I think

Yeah, No = Actually means no.

Too Easy = you’re welcome or no worries.

The bush = either forest or a remote area.

On the Piss = drinking

Stubbie = a bottle of beer

Australia is big in terms of size.The time of year you choose for your trip depends heavily on what part of the country you’re traveling to. Remember that Australia is in the southern hemisphere, so their seasons are opposite of those in the northern hemisphere.

Australia is very particular about what they let you bring into the country. Food, including fruits and vegetables, meat and eggs, is not permitted. You are also barred from bringing in plants, seeds, skins and feathers. Laws also prohibit you from bringing in drugs, weapons, fire arms and protected wildlife.

11. Almost Everything can kill you but it wouldn't:

Venomous snakes. Box Jellyfish. Sharks. Snakes. Spiders. You name it and Australia has it.

If there’s one thing that everyone knows about Australia, it’s the amount of killer animals lurking on the island.

But Australia doesn’t really deserve its ‘deadly’ reputation. Most of these animals attack only when they are intimidated. So, you can relax.

12. There’s a hole in the ozone layer. Pack sun cream.

Even if you have never ever thought of Sun Cream in your life, wear one while on your trip here. Even when Australia doesn’t seem that hot, the sun is fierce.

13. Australia does get cold sometimes

Endless beaches and sunny days for eternity are probably the first things that spring to your mind. While this island does have plenty of those, it can get pretty chilly too – especially in the South in the winter.

Canberra was well below -2 degree mark the time we visited.

Melbourne is unpredictable – Summers can be extremely hot but during winters the temperature can plunge below the 10 degree mark.

In Sydney, the days are warmer but the nights are freezing.

In Perth the winter temperatures average around 17 degrees.

14.Alcohol Laws in the Country are strict:

Alcohol isn’t sold in supermarkets in Australia, but rather in separate bottle shops (Dan Murphy's). They also have strict laws in nightclubs, where shots aren’t sold after 11 pm and double spirits are strictly not allowed.

17.Coffee is a religion here:

Melbourne has a love affair with latte and cappuccino and therefore has rightfully earned the title of coffee capital due to its plethora of age old and established coffee shops.

18. Talk to everyone around:

Aussies are gregarious people and will talk to you about anything. They rarely miss a chance to say 'hi' to a stranger on the street. The day I landed in Sydney, the woman across the counter struck a 10-minute conversation and I was pleasantly surprised.

You will want to bring home these chocolaty delights. Imagine layers of chocolate malted biscuit sandwiching a chocolate cream filling, dipped in a thin layer of chocolate( I am still craving for them) I am not even a chocolate person and I got dozens of these.

20. Never rely on the weather forecast, be prepared for anything.

Pies, here are not sweet. Instead, they have meat in them, and you can find them on every block at the chain cafe, “Pie Face.”

If you get caught even holding a phone while driving in Australia you go to jail. The country gives lots of emphasis to road safety. Only cross the road when the lights go greens(this rule is applicable even with the tiny streets you cross).Their emergency number is 000 and not 911 just in case you encounter any problem.

I hope you have a great trip Down Under.