Celebrating 20 years of 'The Beach'-Part 1 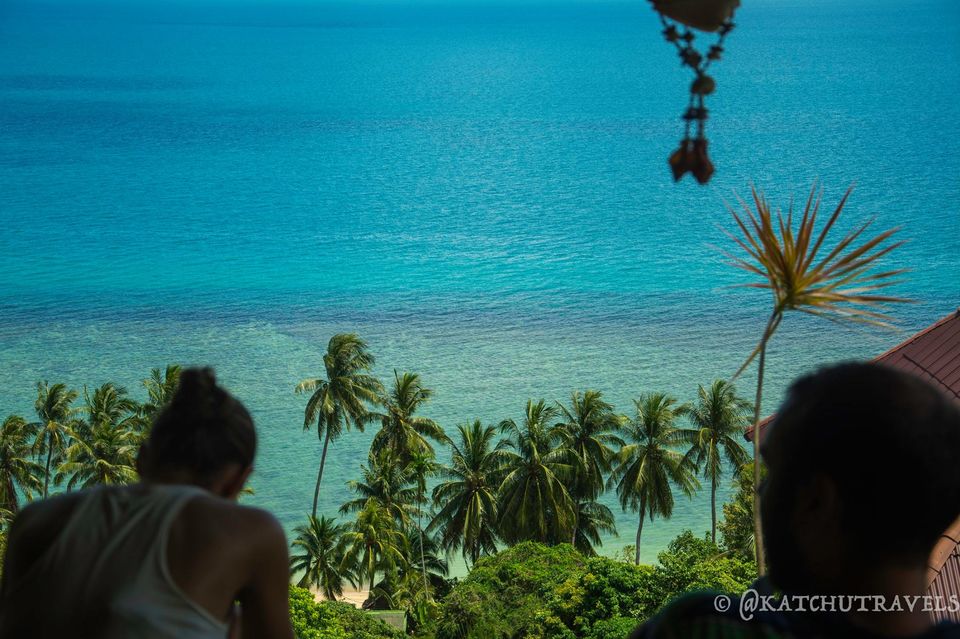 “When you develop an infatuation for someone you always find a reason to believe that this is exactly the person for you. It doesn’t need to be a good reason. But in the haze of infatuation, it’s just what you’ve been searching for all these years.” (From 'The Beach'-1997-A novel written by Alex Garland and also made as a motion picture by Danny Boyle starring Leonardo Di Caprio in 2000)

Walking in the heated cauldron of Chennai, between the domestic and international terminal, I knew my infatuation was moments away. In a few minutes, I would be up in the air flying to the object of my infatuation. It was 9 years, since I was infatuated and 20 years since the ‘infatuation’ came to life. It was a novel called ‘The Beach’ which was my infatuation. I connected with the book and the dialogues so much, that I had to probably relive the novel by traveling on the same trail. That beach trail! My object of infatuation!

The DVD of ‘The Beach’ lay in my shelf, bruised from the number of times, its been called on for moments of inspiration. As the bandwidth became better over the years, I just chose Youtube and Google Play for playing it. But what was probably missing in these 9 years was to maybe do the trail that ‘Richard’ did. There’s a whole lot of a difference between real travel and vicarious travel, and at some point, I had to break the shackles that the ‘mental disorders’ I suffered from. As a traveller, who wanted to teach his little son the beauty of geography by traveling each summer to the lands that he was to study, I suffered from the normal mental disorders that city bred B-School educated people have by choosing the safe life which had 2 house EMI’s choking the explorer in me. I had seen enough videos on youtube of ‘The Beach’ and the trail that lay ahead in Thailand. I mean enough videos. Maybe it was time to make a video

“If I’d learnt one thing from travelling, it was that the way to get things done was to go ahead and do them. Don’t talk about going to Borneo. Book a ticket, get a visa, pack a bag, and it just happens.”

This quote got my goat. It felt like a bunch of words, slit me through my neck and told me ‘No more excuses’. I called up my friends over a whatsapp group and decided to go ahead and book. I was not quite sure when to go and whether #TheBeachTrail would be possible. We went over to many of the travel planning sites and started entering the destination pair rates one by one, and we found the visual map search on Skyscanner called ‘Inspire’ interesting that it allowed us to see prices of destinations from Chennai in one visual map.

Bangkok seemed a lot cheaper, than some of the other destinations like Colombo, Jakarta, Kuala Lumpur. In one long WhatsApp Conversation, the three of us decided on Bangkok to plan our onward and return tickets, and to figure out the rest of things on the go. Tickets booked, we all knew that the that ‘slitting’ quote was behind us. We were going to Alex Garland’s world like 'Richard' did.

Once on the Air Asia Thai flight, we were 'Richard' in our minds, before our desi pleasures intervened. We had to take a break in between to take in some Vegetarian Hyderabadi Biryani and Mushroom Soup, before we started soaking into the new world that we were flying into. The next few hours were manic extremes. From the peaceful backrest and armrest on the flight to standing in queues at the immigration desk at 3 am to lugging our suitcases outside the airport and finding the airport highway to board an Uber, and racing our way to the other side of town to find a bus + ferry ride at 6 am. It was a little like the trip relaxed, found its adrenaline release and then went back to being released till we reached Chumphon- a little port town by a quiet tropical beach.

Coco-Hut Beach is a great place to go spend a day out at the beach. Its the tonic you need to clear up your mind. If you can afford a Thai Massage, you should enter their serene spa on the beach. My friend, who is a massage enthusiast, simply loved their setting and spent the sunset enjoying a massage, and watched the sunset in a dark room that had a small darkened window with views of the beach.

Gulping down Songserms by the Sea! 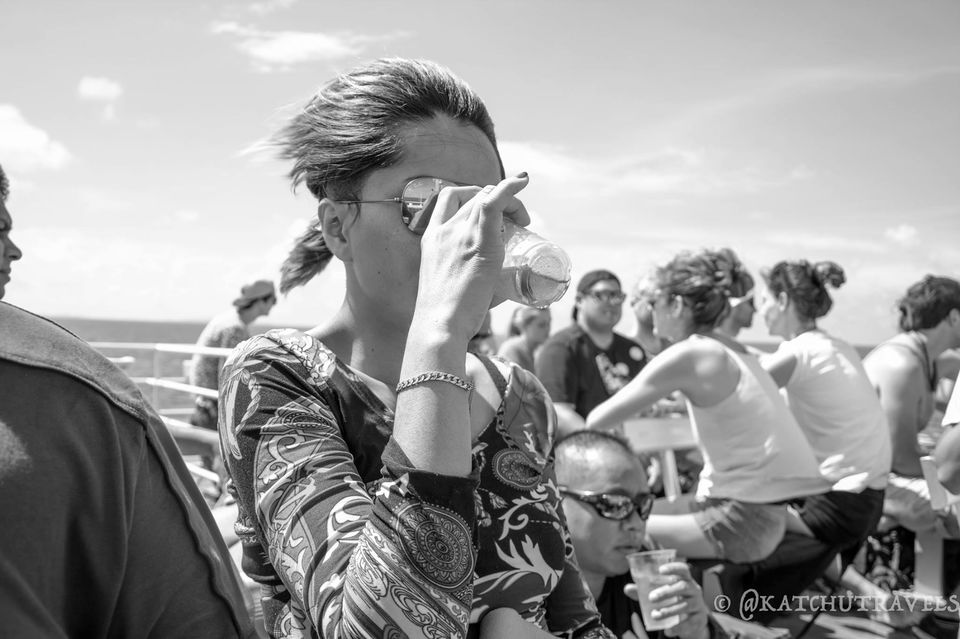 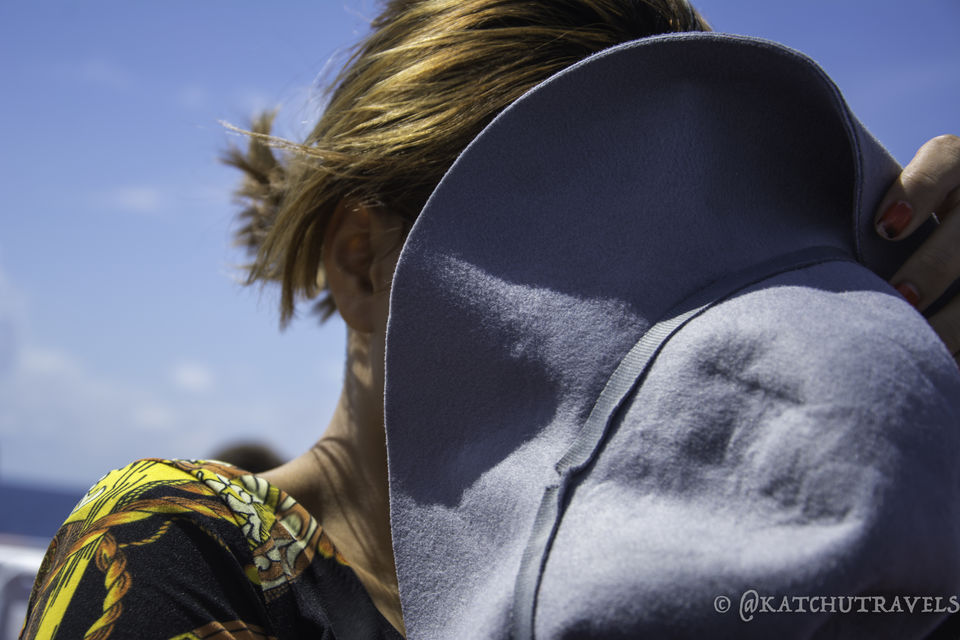 The sea and the horizon! Often timeless and endless! 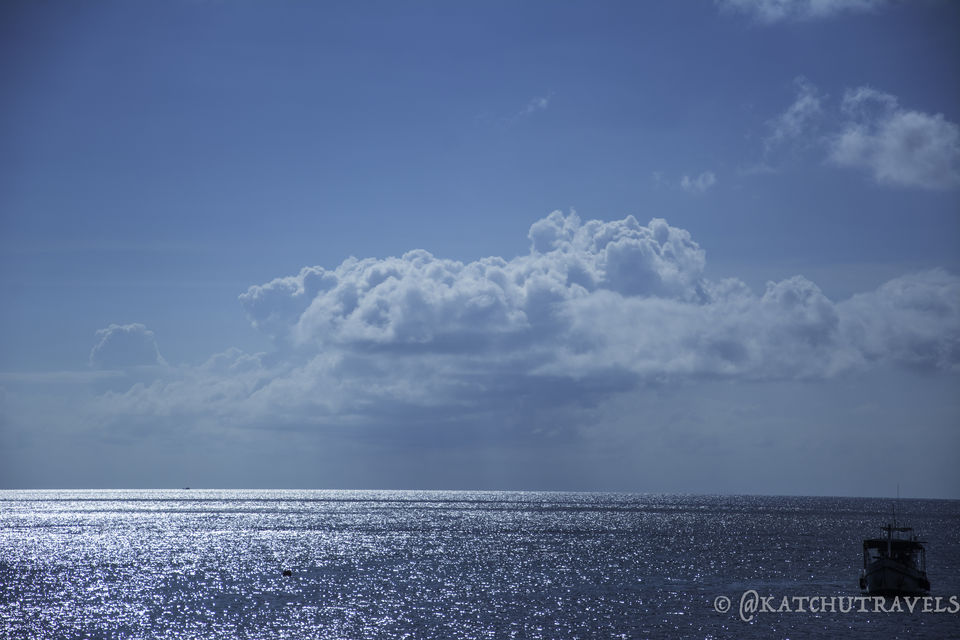 The island of Koh-Tao greets as our ferry docks in for a while! 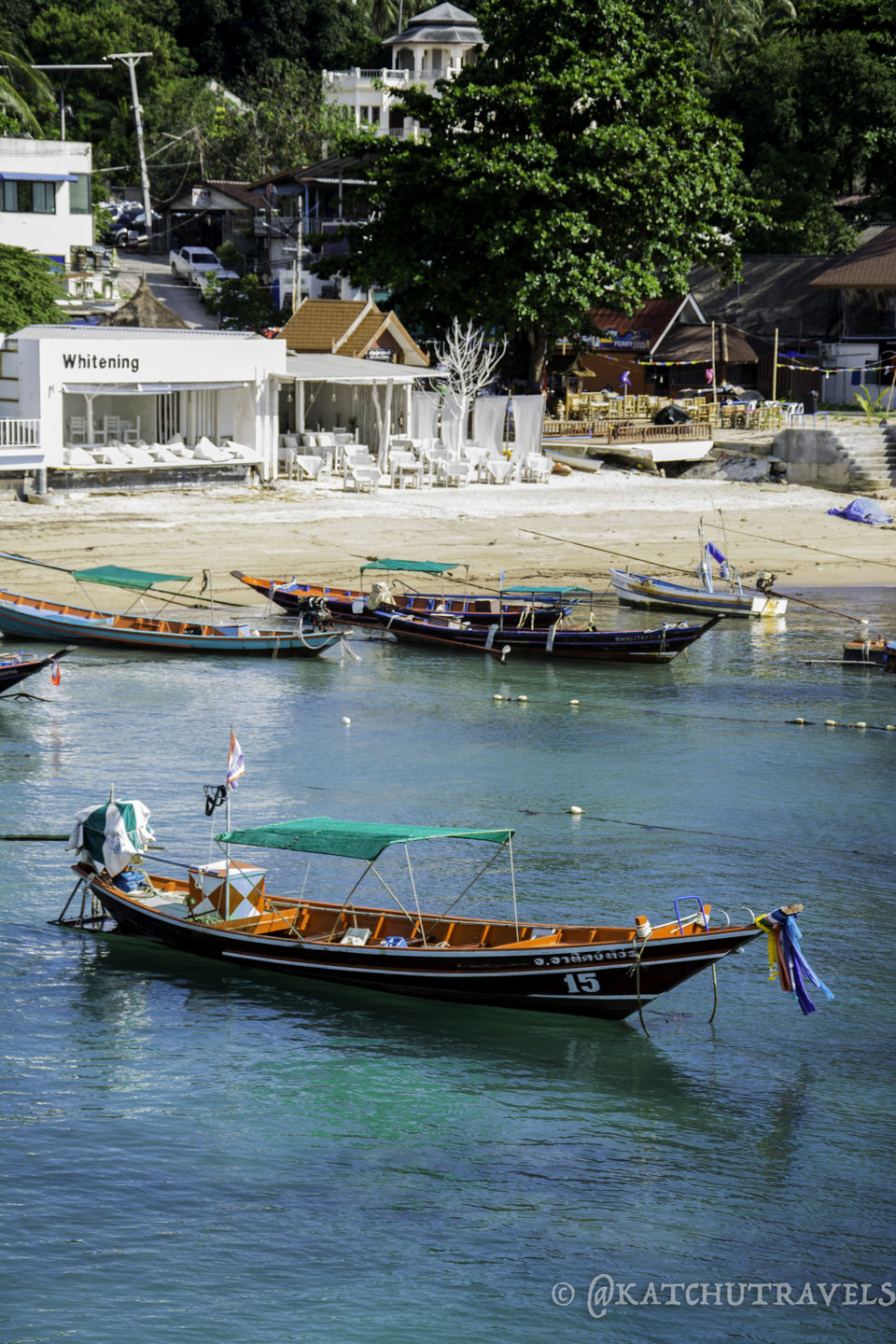 The music of the waves has its own trance like state! 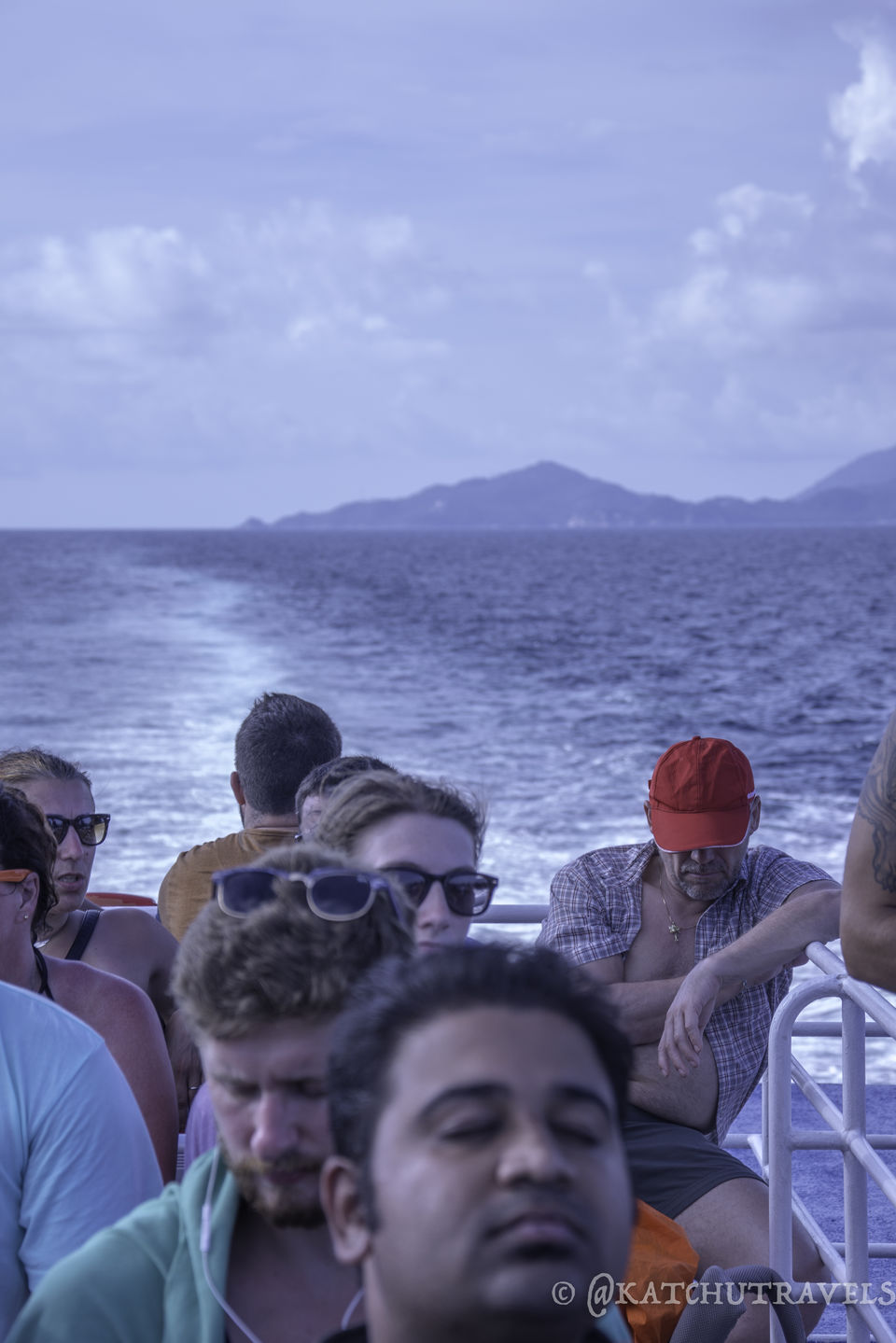 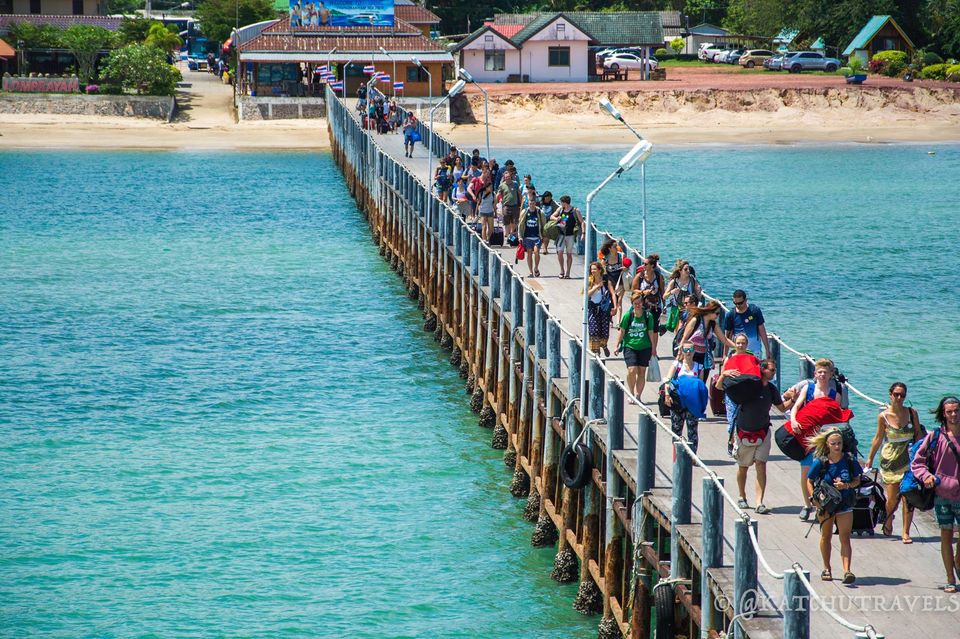 Walking the Plank in Chumphon 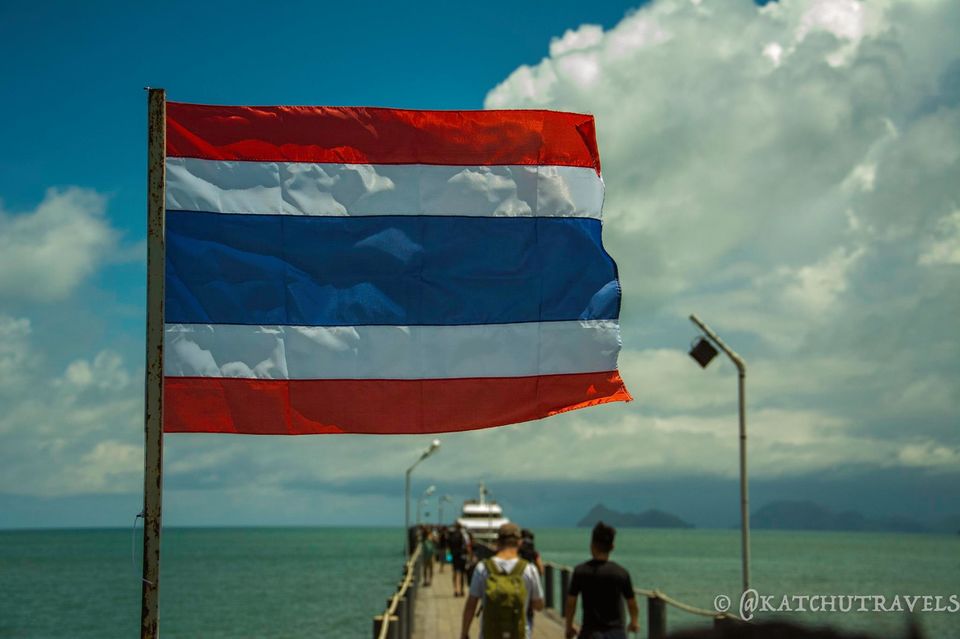 The scenic drive from Haad Rin to Ban Kai beach 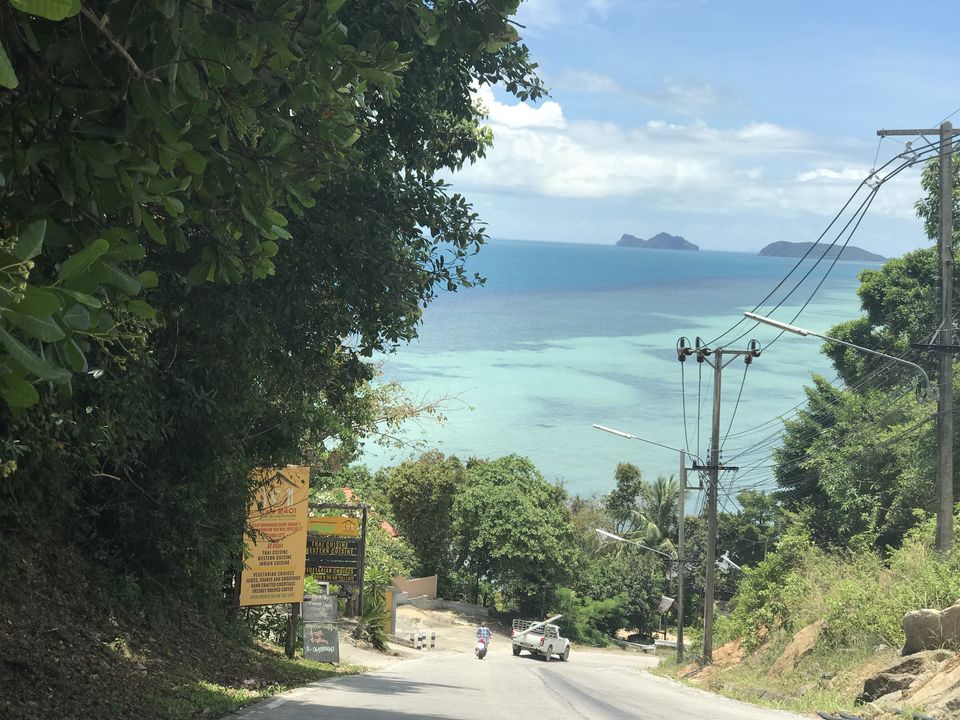 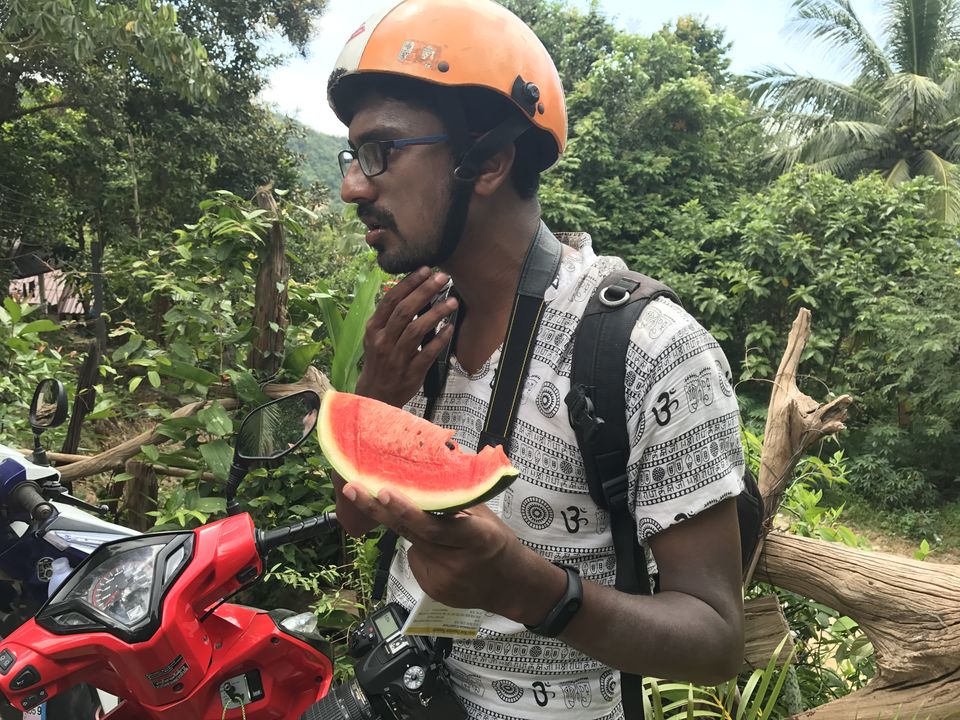 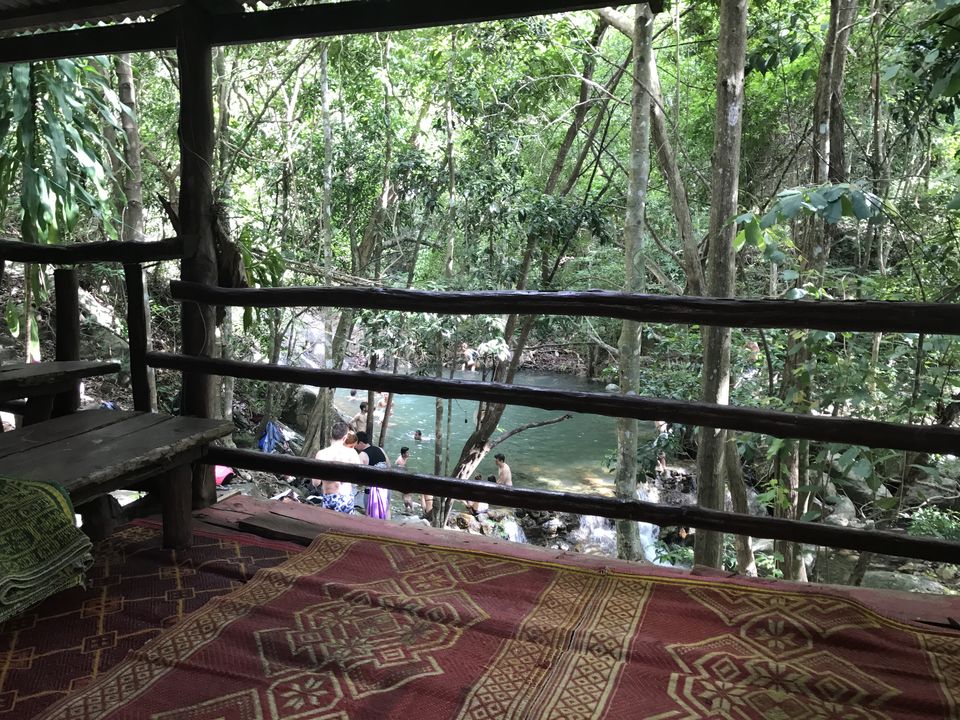 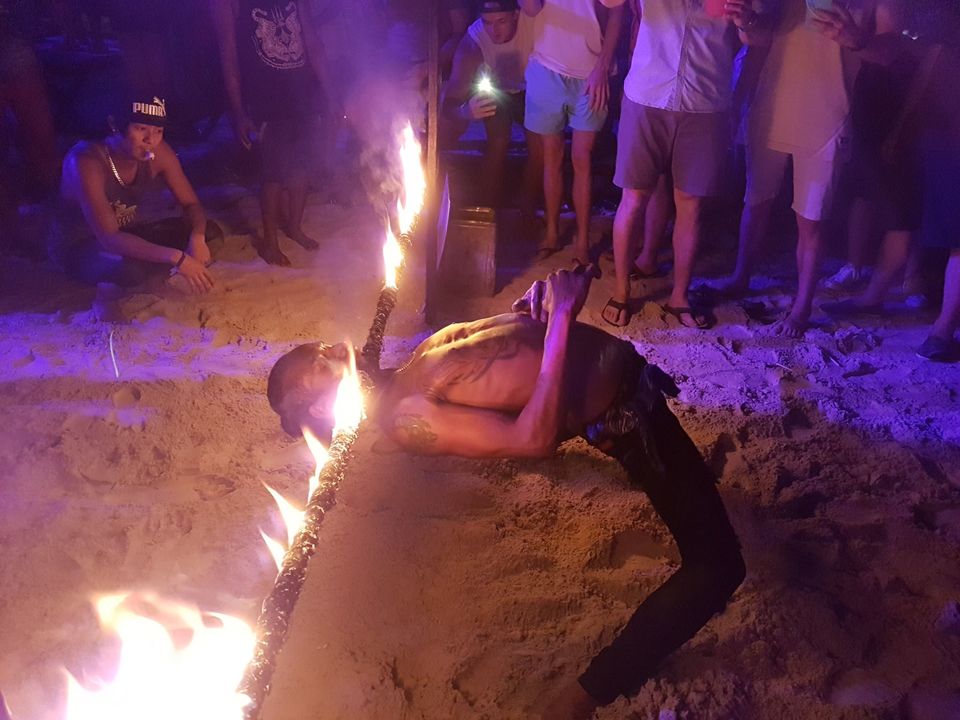 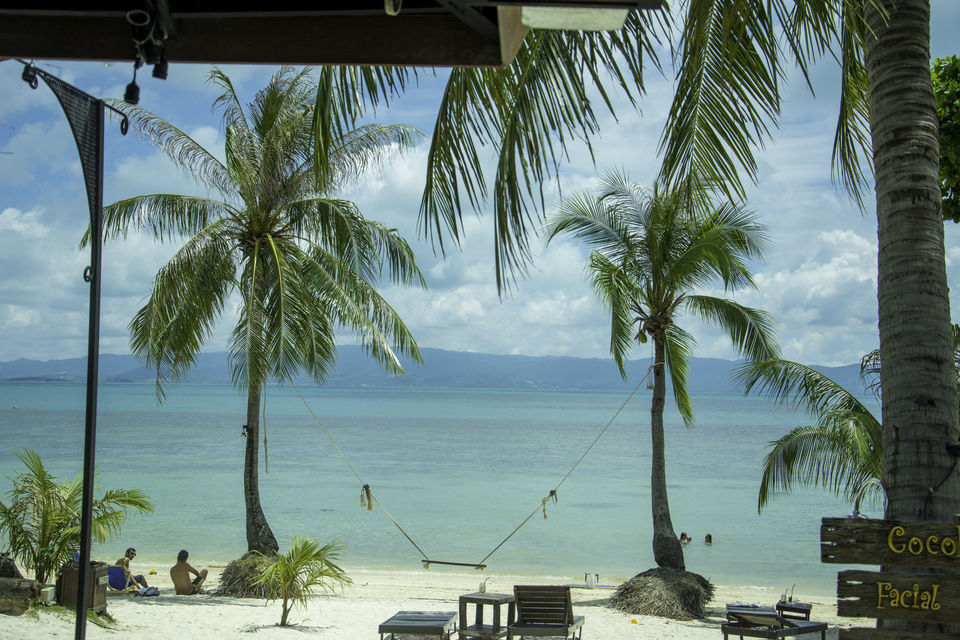 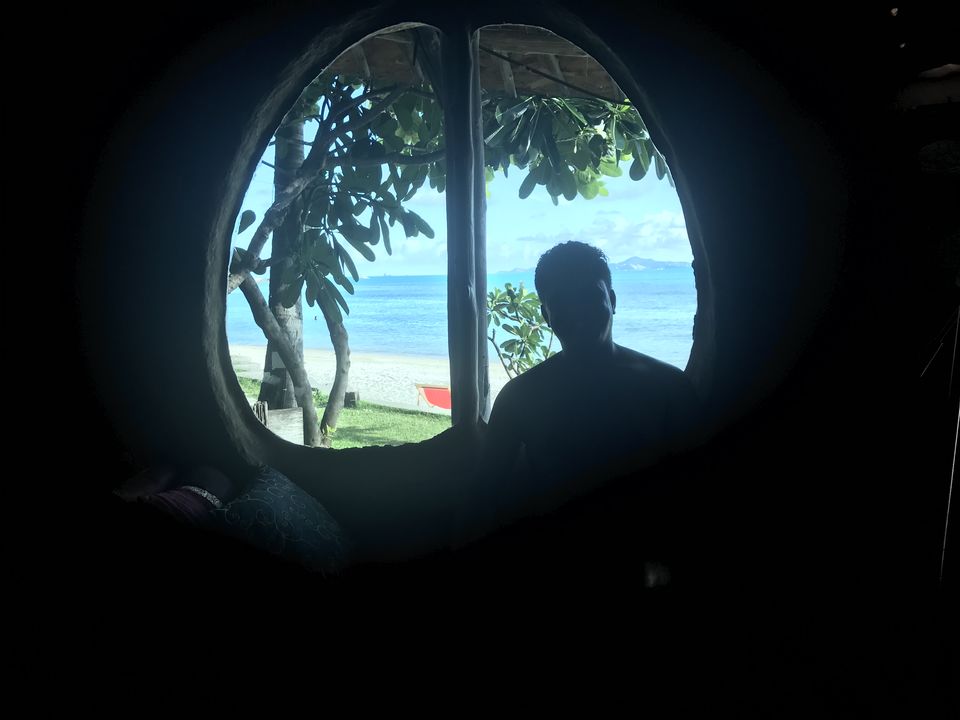 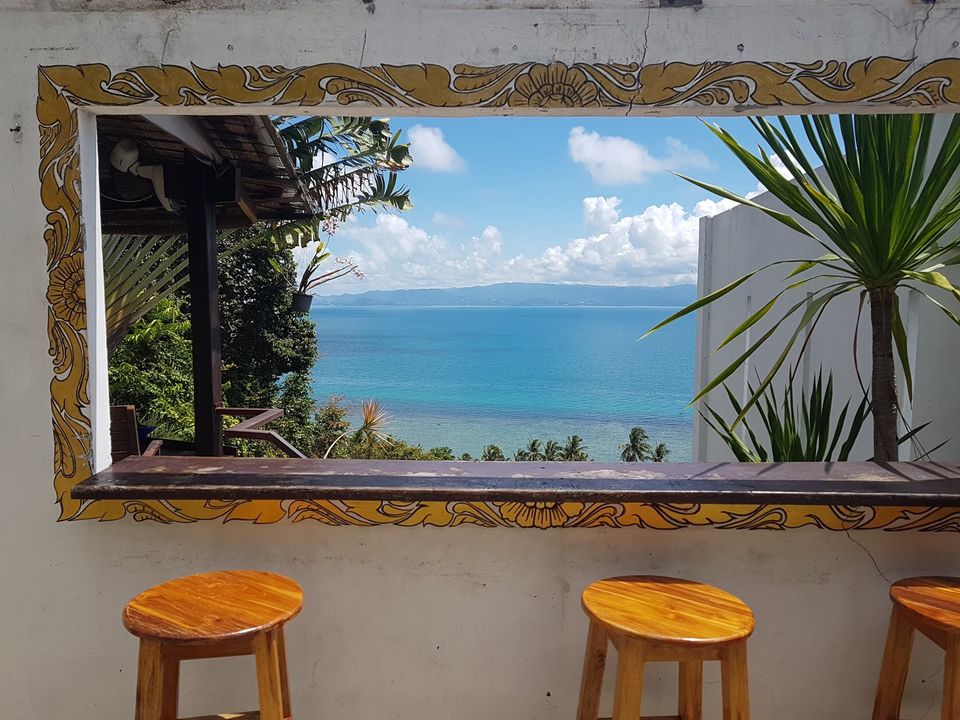 Abhi enjoying some tender coconut to beat the heat! 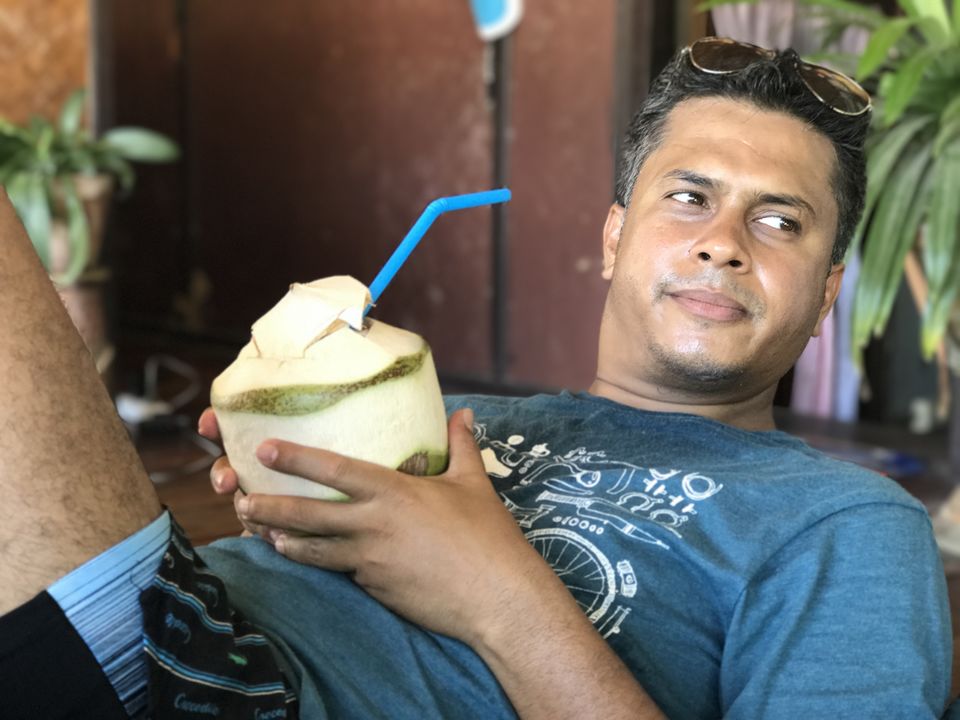 Chumphon opened up our eyes, and we were starting to see Alex Garland's world. Green Seas, Blue Seas, Blue Skies, White Sands, Tropical Green Trees and Hills dotting a vibrant landscape, as the wind brushed aside the flag near us. Paradise was opening out and we were sucked in

We had to walk across a wooden plan to go find our ferry ride from Chumphon to Koh Phangan, which would be our base for our #TheBeachTrail2017 trip.

The adrenalin of looking at the open sea and its wide canvas, had us craving for more shades of blue and green, as the breeze lulled us to switch off the adrenalin rush for a period of peaceful mid-day nap. And why would we say no?

The ferry is home to many travelers, which we discover in subsequent conversations with a Thai local and an Australian lady. The Australian lady was coming to Koh Samui to just take back her luggage after spending a week in Koh-Phangan and was telling us some experiences in Koh Phangan that we should try out. The Thai lady, was dressed in a black skirt with shades of red and yellow, and she came and sat next to us, and on a sleepy boat decided to open up a box which contained some Thai Whisky and Rum, and a separate mini box of ice. She offered my friend who gladly exchanged his cheese munchies for endless sips of whisky, as the wind was ripping straight into them. They had to close their face with hats and use that time to drink and on one occasion, my friend lost his hat, in his attempt to gulp down some Songserm Whisky, while the 2 tee-totalers in the group just watched him!

The ferry ride on the sea, had made us relaxed. As relaxed as doing breathing exercises inside a forest, while observing the sun lighting up the forest in the morning. We made our way to Koh-Phangan to our hostel and decided to go there and plan a route map for what we planned to do the next day. We did that visited a few dances that were going around and cooled around in a pool party nearby.

If you fancy listening to this in the sounds of the placed we visited, here's a quick video recap of how the trip had gone so far.

The next morning we walked our way to explore places nearby, and after half an hour of exploring we found a beautiful beach that had less than 20 people on a 2 kilometre stretch and the next paradise had been discovered. We also discovered a swing to spend the day by leaping in the air and discover the simple pleasures of life.

We borrowed a bike and drove through the scenic Koh Phangan island, where we would often stop at roads that snaked through the valley with views of the sea below. We'd create stops for fruits and tender coco nut juices, as supplements on a hot day, for us since we were on a backpack budget trip, with the focus purely on exploring a trails and places on the #TheBeachTrail2017

Our bike rides took us through the scenic Baan Kai village to a couple of waterfalls named Paradise and Phaeng, where we were in sync with nature, listening to the near silent sound of the forest, interrupted by the stream and the waterfall in the distance. It felt like we had a remote when we were in this island. From this hilly waterfall setting, if we wanted a beach setting to swim by, we were only half an hour away from any kind of setting that we wanted.

The waterfall's lower reaches are easy to swim over and climb 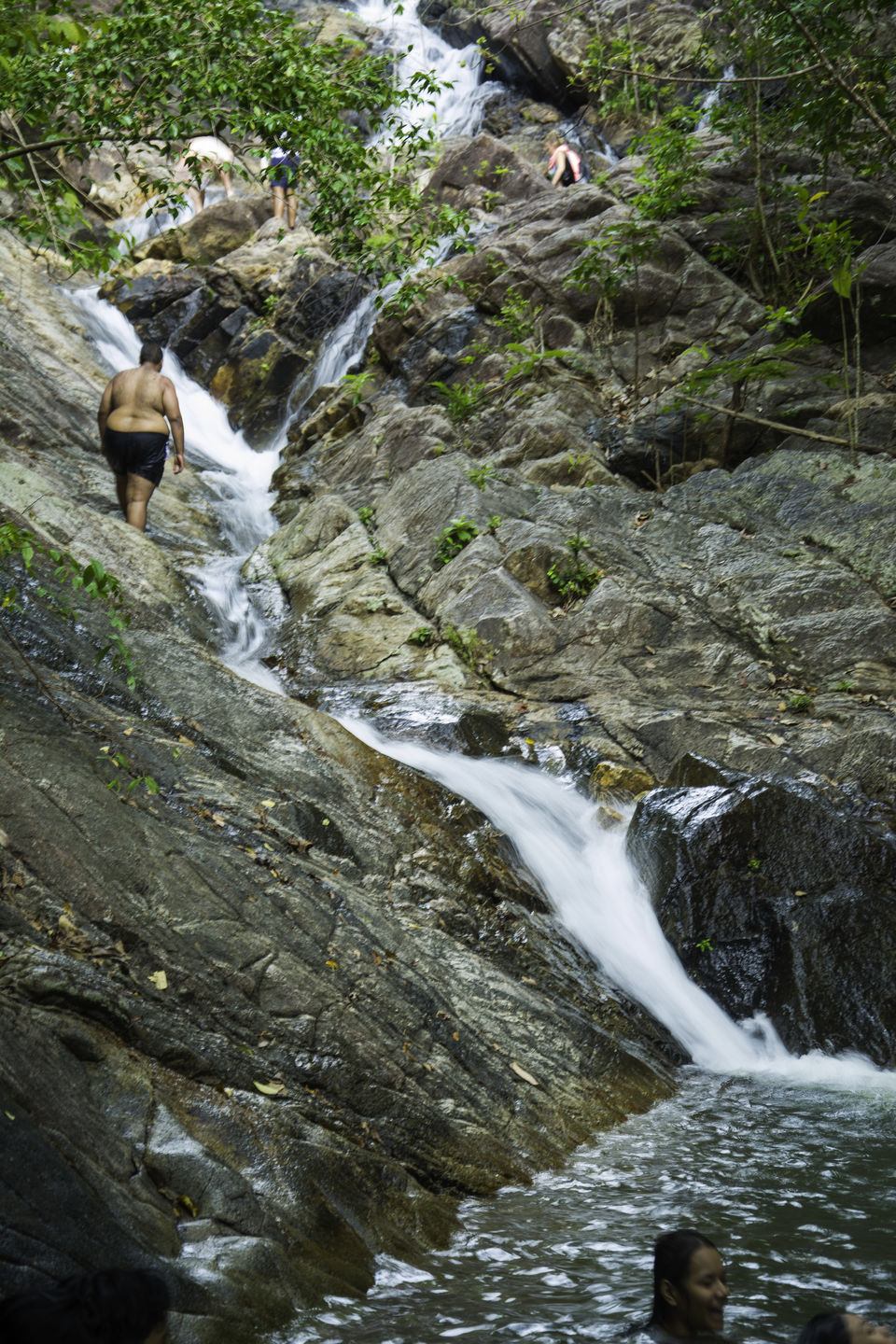 A few of us decided to get on to a branch of a tree, with a rope and tried a few Tarzan style jumps into the pool created by the base of the waterfall. It was so much fun, trying to jump in and out throughout the afternoon, and landing on the water. The initial chill is the biggest hurdle to cross, but with the sun beating down, you would discover that water's chill can never be anyone's enemy!

Life is about creating memories and moments and the first 3 days of the trip had been about just doing that and relaxing from our busy lives back in India. To watch our days 2 and 3 in more detail, go ahead and watch the second episode of our little film on #TheBeachTrail2017 and let us know if you also feel as kicked up like us in celebrating 20 years of 'THE BEACH' 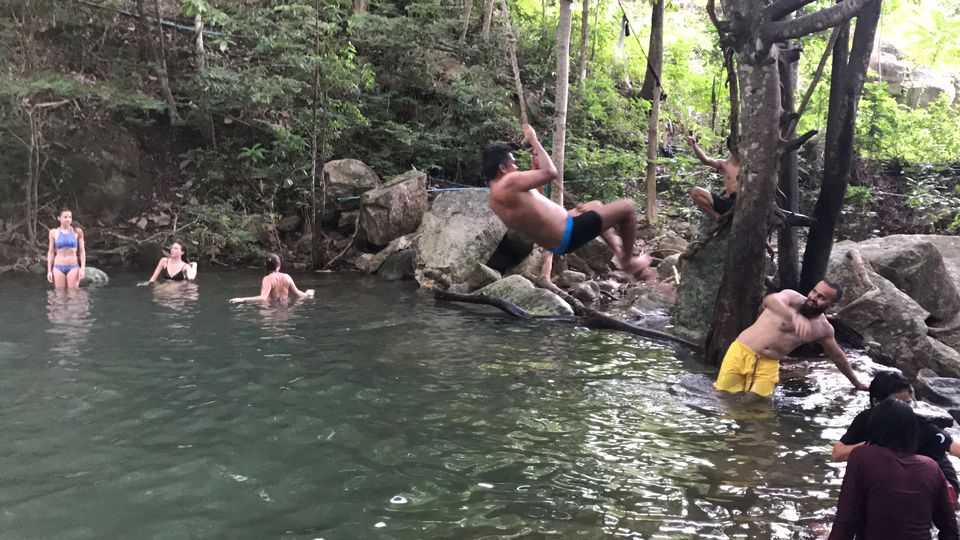 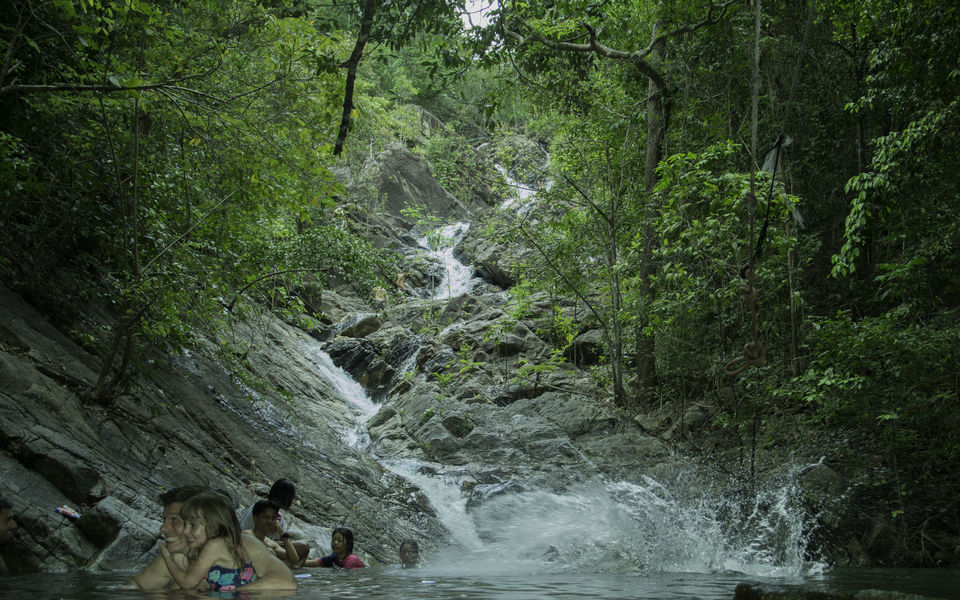 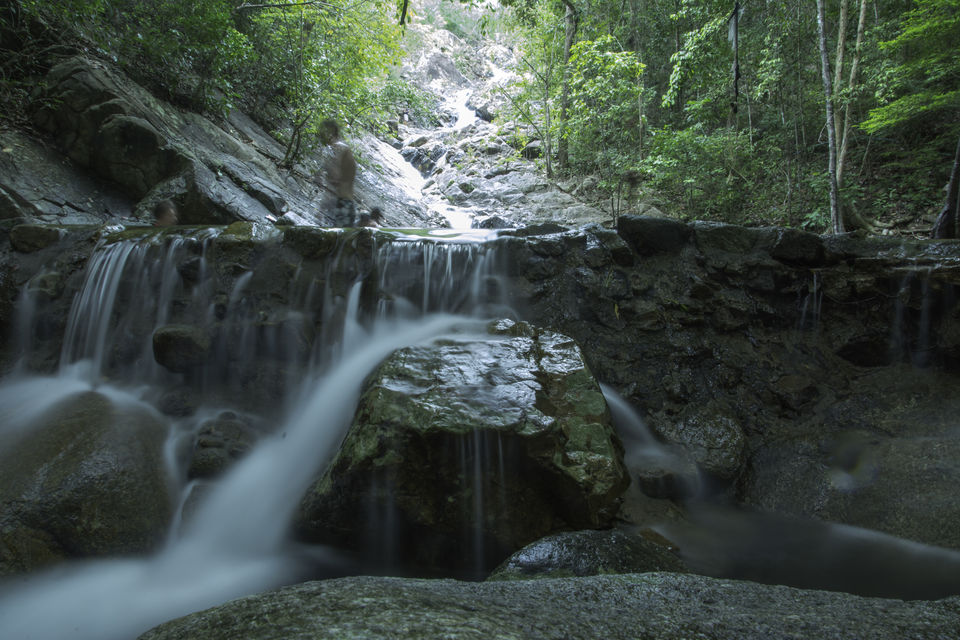