Bratislava Travel GuideBratislava TripsWandering Through The Streets Of The Offbeat Bratislava: A Photo Essay

Wandering through the streets of the offbeat Bratislava: A photo essay

Bratislava, the capital city of Slovakia, sits at a cusp of old-world charm and newer, modern art spaces. The city lies on the beautiful Danube river and is easily accessible as a day trip from Vienna via train, bus or boat. The city maybe just short of two hours from Vienna, but soon as you reach Bratislava, it feels like you traveled in a time capsule. On my trip to Vienna early this year, we chose to include Bratislava in our itinerary and took a bus tour with Viator. As our bus departed from Vienna's center in the direction of Slovakia, it wasn't just the scenery that was changing. If Vienna is characterized with rich architecture and modern luxury, Bratislava seduces one with its nostalgically attractive buildings and lanes. Bratislava is for the relaxed traveler who doesn't mind getting lost in the narrow pedestrian streets of the 18th century buildings.

So, join me as I take you on a virtual walk through the streets of Bratislava! 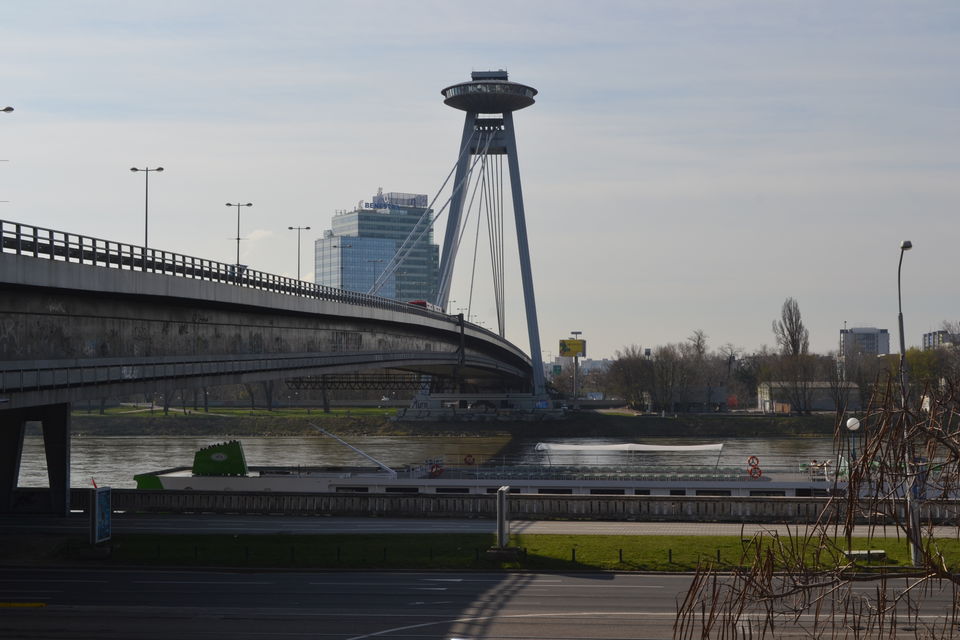 Bratislava occupies both banks of River Danube and is a beautiful sight. The river can be easily crossed over on foot on bridges which look out to the city's high rise buildings and offers many photo opportunities of the city. Most popular of the bridge is the Most SNP, which is the world's longest cable-stayed bridge to have one pylon and one cable-stayed plane. Here, you can get a panoramic view of the city of Bratislava from the open-air observation deck on top of its UFO-shaped building. At the bridge, one can also enjoy views of the Bratislava Castle that sits on a hill overlooking the city. 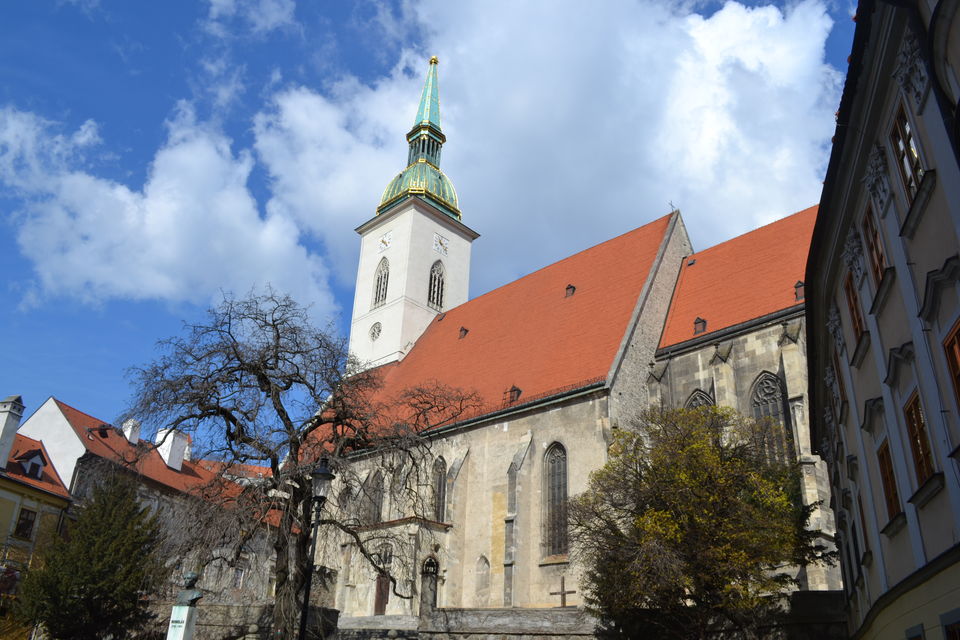 From the bridge, arrive at the St. Martin's Cathedral - one of the oldest churches in Bratislava. Sitting right at the edge of the Old Town, this 14th century church is famous for being host to crowning of as many as 11 Austro-Hungarian monarchs. 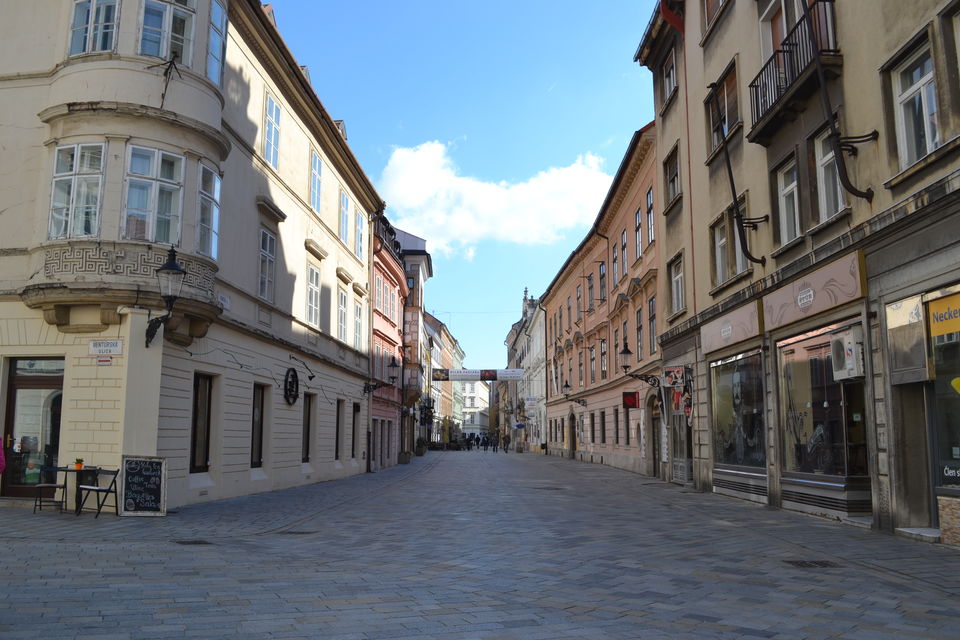 As you leave the Cathedral, the city's character begins to change with long, winding passages. If you are in the city on a public holiday, like I was, scenes such as above aren't unusual. The break from the crowd is a welcome change, although sometimes eery! 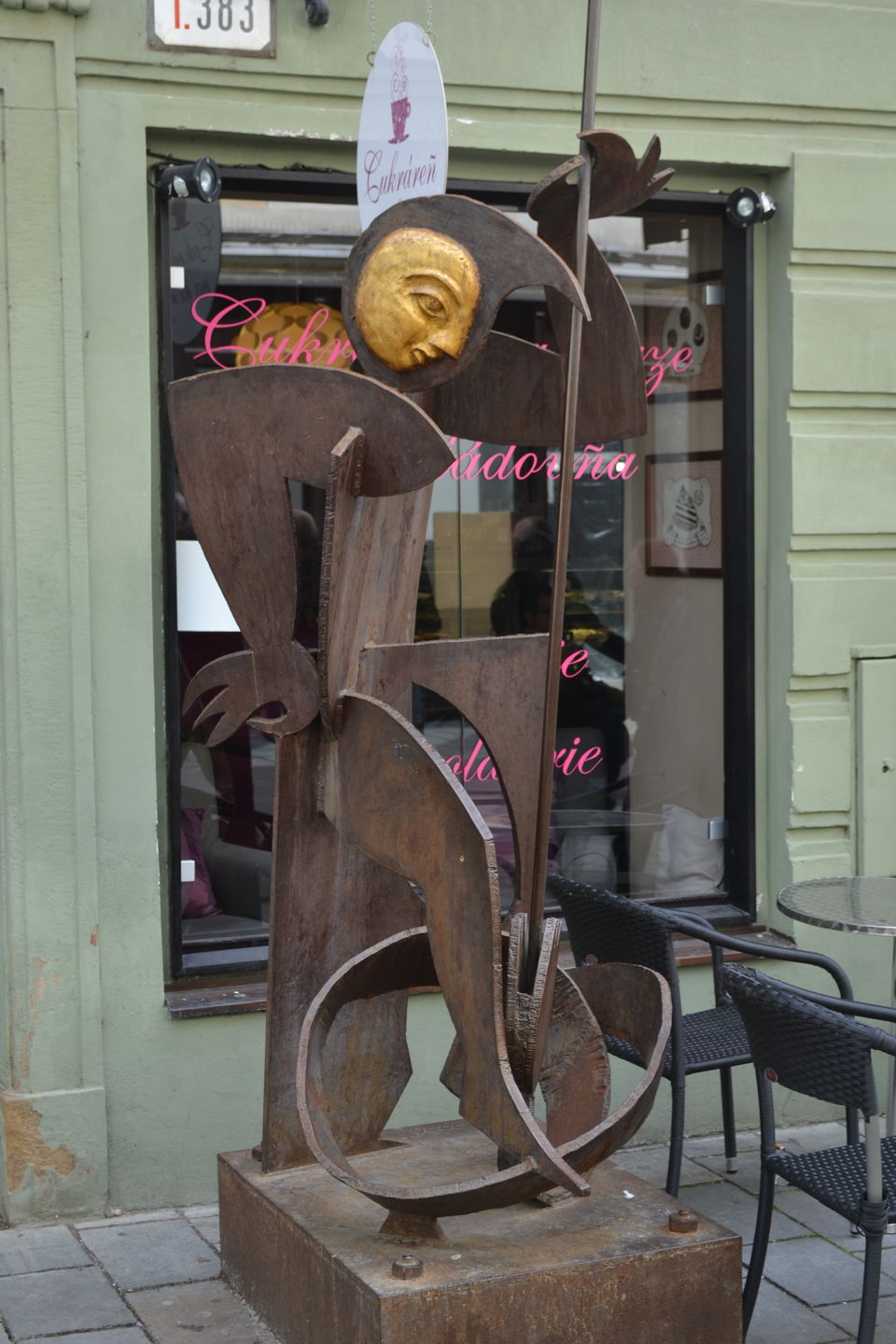 It's not difficult to see why one can get lost in the streets of Bratislava - with its myriad cafes, restaurants, nooks and corners, and statues, Bratislava is a playground for the traveler and a muse for the storytellers. 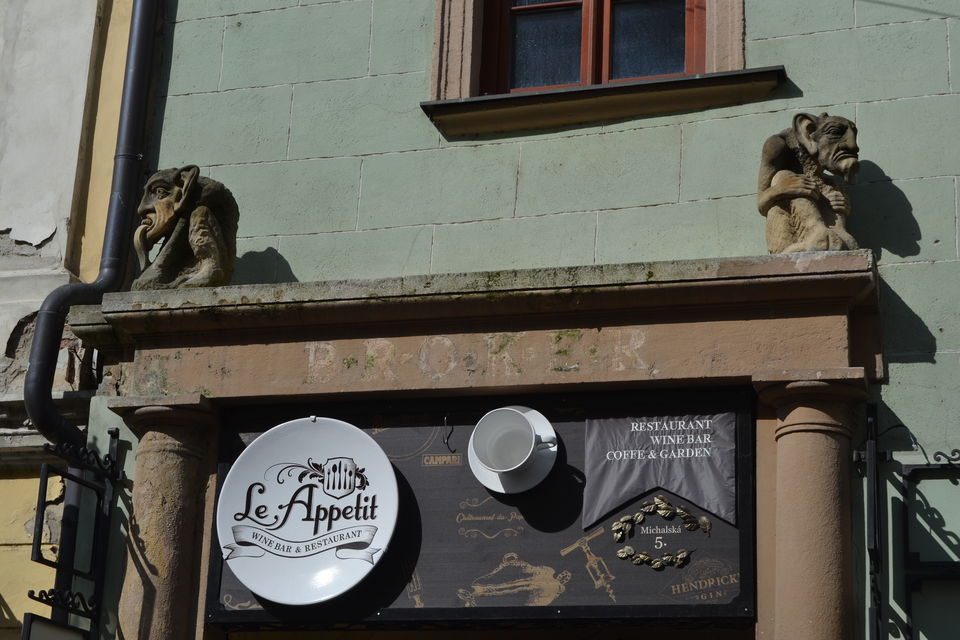 The mysterious lanes of Bratislava never fail to throw up surprises that prompt the eager traveler to bring out their cameras and click it right away! This restaurant at the Michalska street, pictured above, is a perfect example! 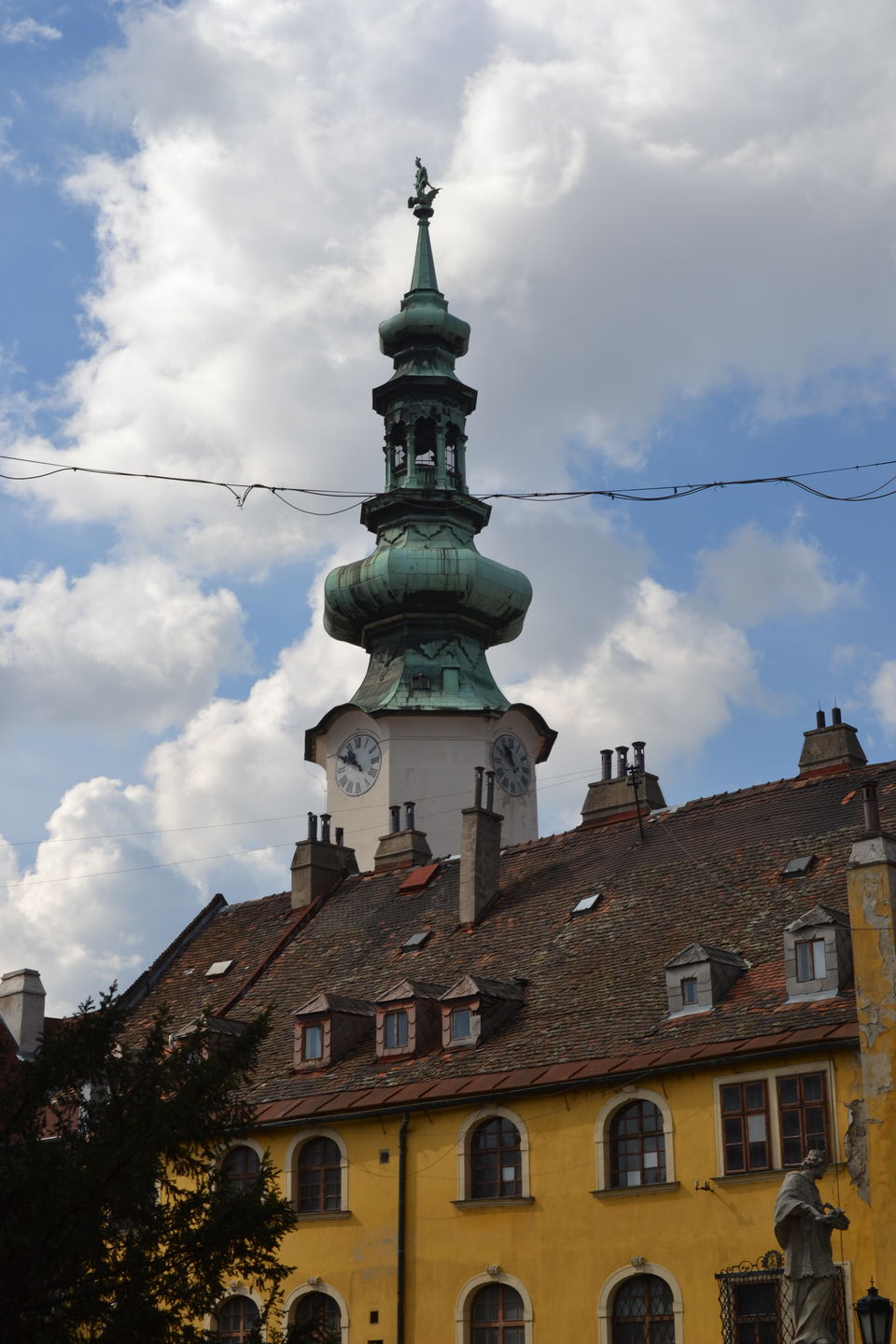 Depending on from which side you are entering Bratislava, Michael's Gate can either be your entry to the time machine or your last stop that connects you to the modern city. But you cannot miss this, thanks to the Michael's Tower that is seen from almost everywhere. Located on the top of the Michalska street, it is the only city gate that has been preserved of the medieval fortifications. It houses the Exhibition of Weapons of Bratislava City Museum. 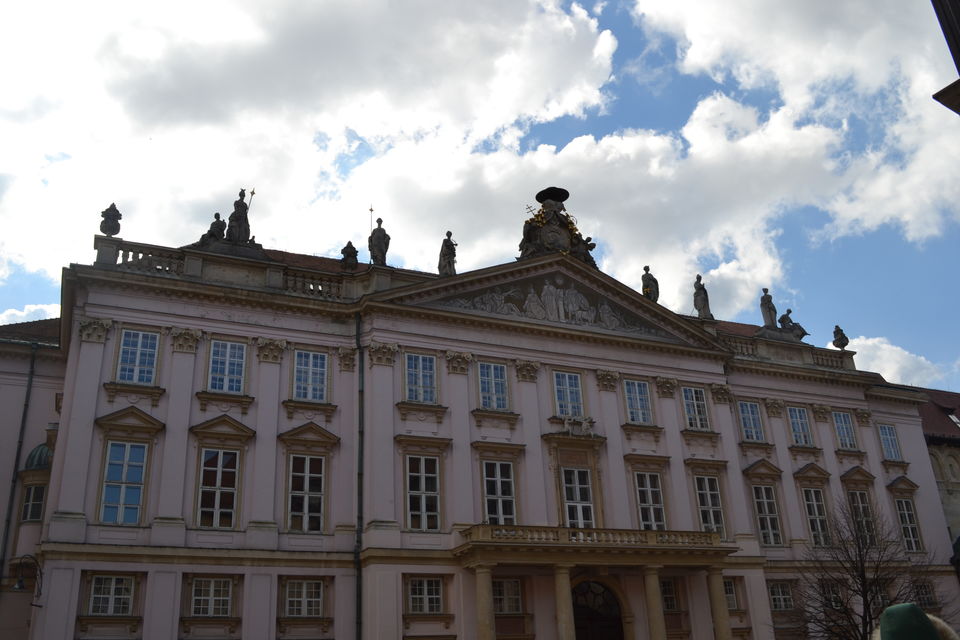 Next up was The Primate's Palace, a neoclassical palace in the Old Town of Bratislava. Built in the 18th century, it now serves as the seat of the Mayor of the city. The Palace speaks of the Hapsburg royalty, with its sparkling crystal chandeliers. It's beautiful old architecture made up for the gloomy weather! 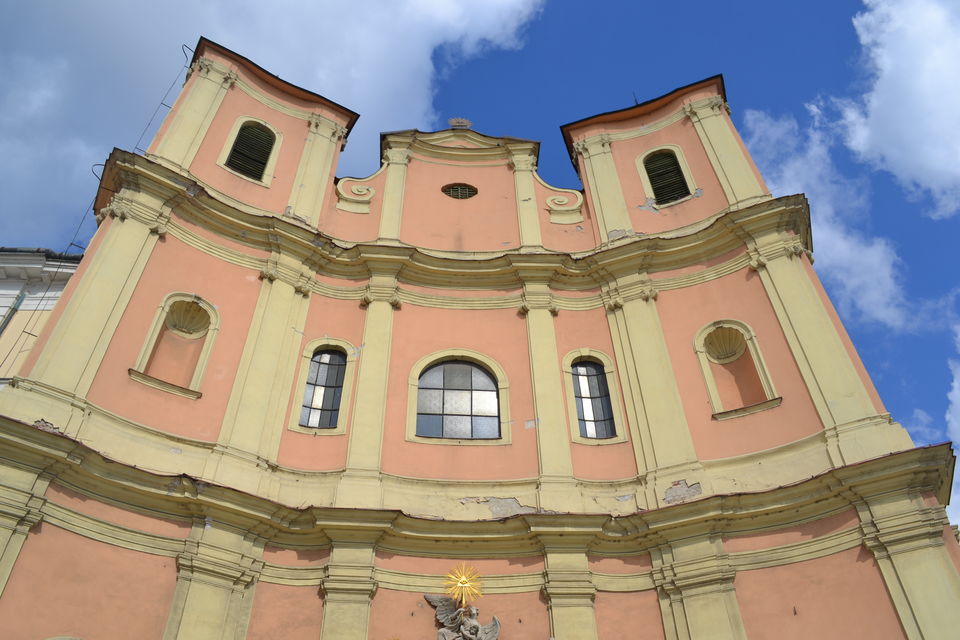 Trinitairan Church - a baroque church built by the Hungarians. 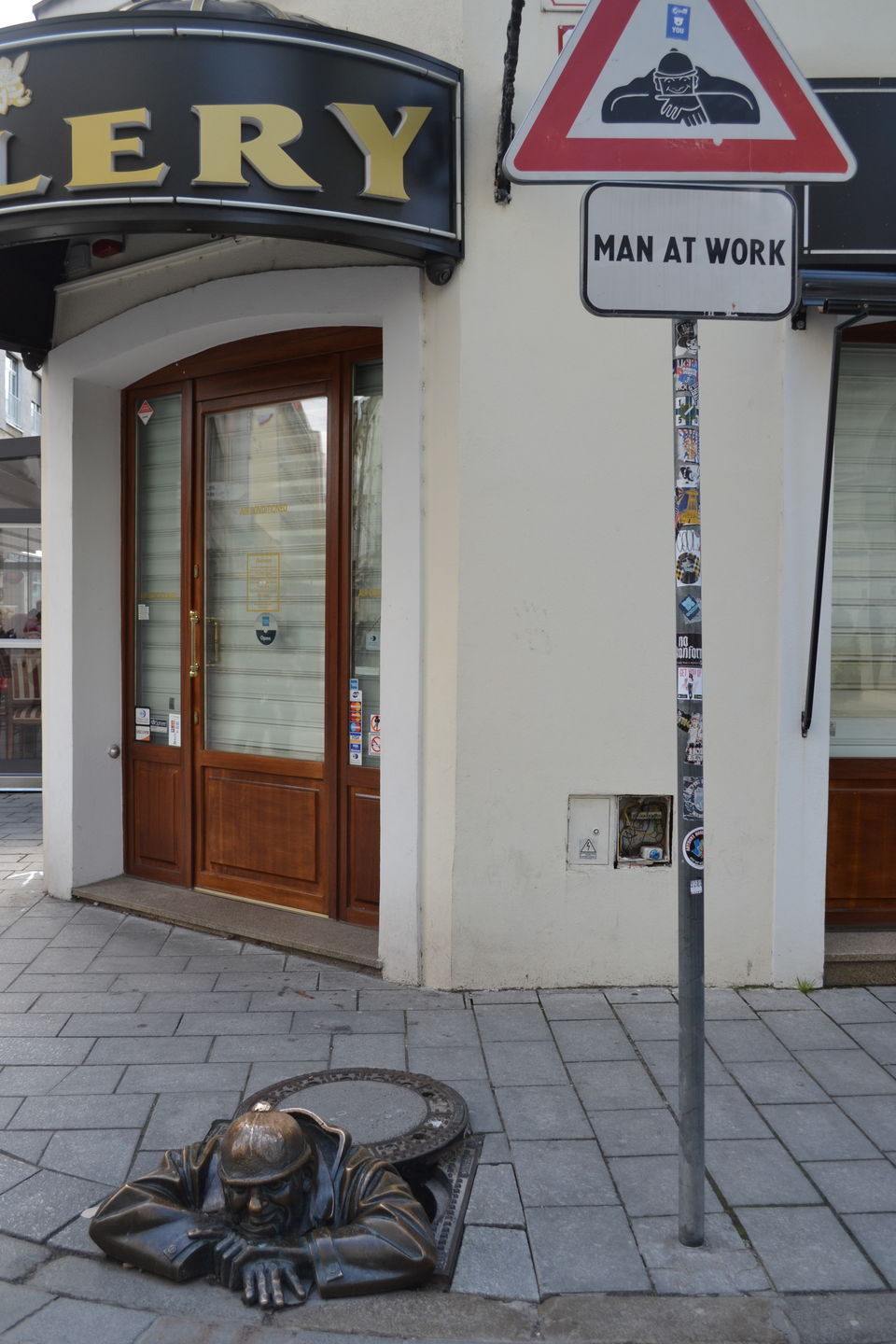 Wait up! Man at work! Bratislava's town is known for a variety of statues all over the Old Town, adding a quirky touch to the city. This statue above is called the 'Cumil' and is a bronze statue of a man peeping out of a manhole and is located at the junction at the streets Laurinská and Panská.

With that we come to the end of our tour! Have you been to Bratislava? Which sights did you enjoy the most on your trip? Share your thoughts!