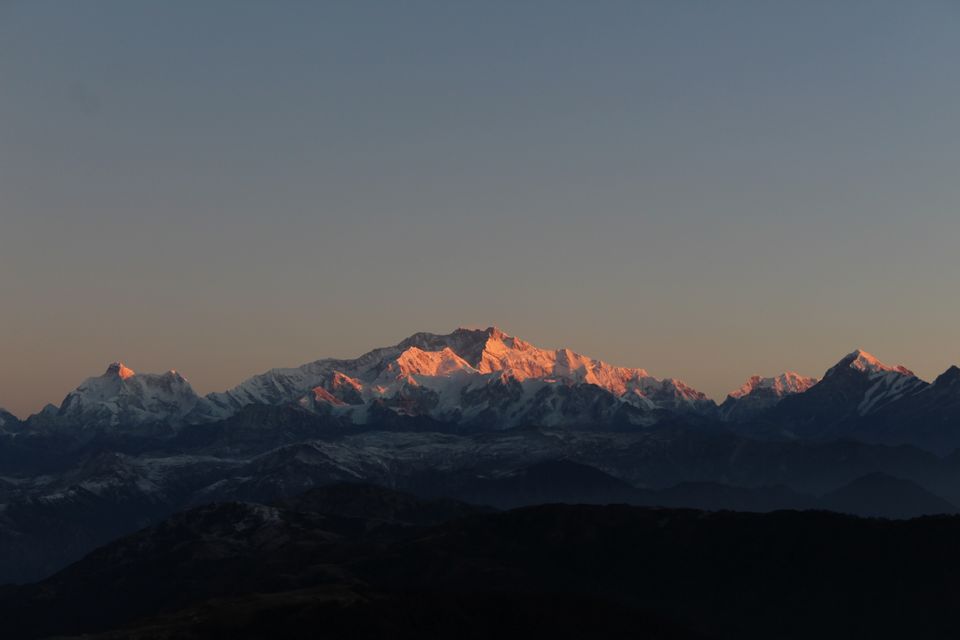 "Because not all cross-border journeys require passports"! Thus the sandakphu trek to behold the highest point in India, the Kanchenjunga, starts here! 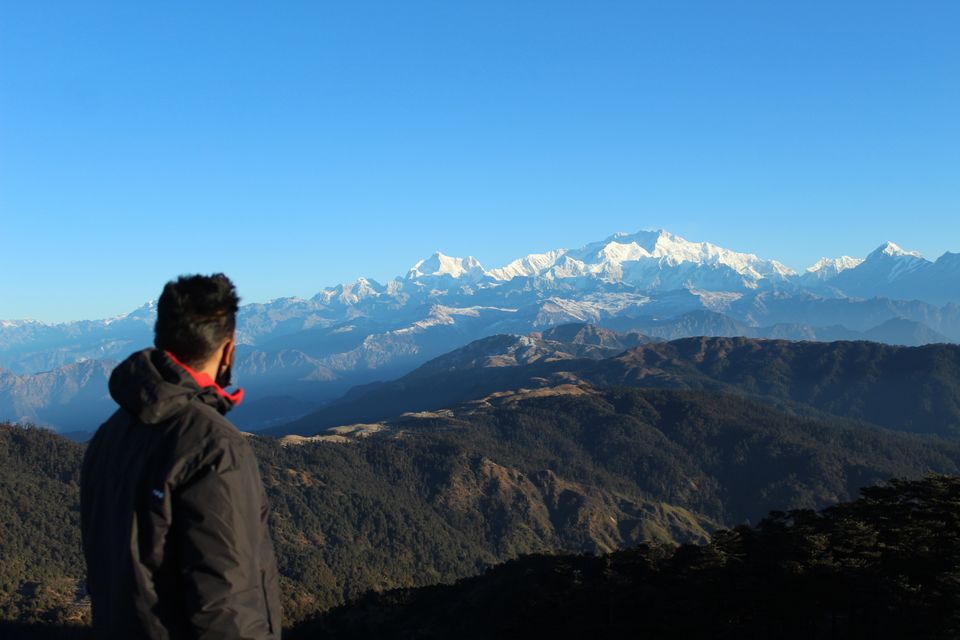 There are a few places left in India, carrying the colonial dreams of the past, and Darjeeling is one among them. The trains powered by the British steam engines, show you the last flames of the imperial fire. 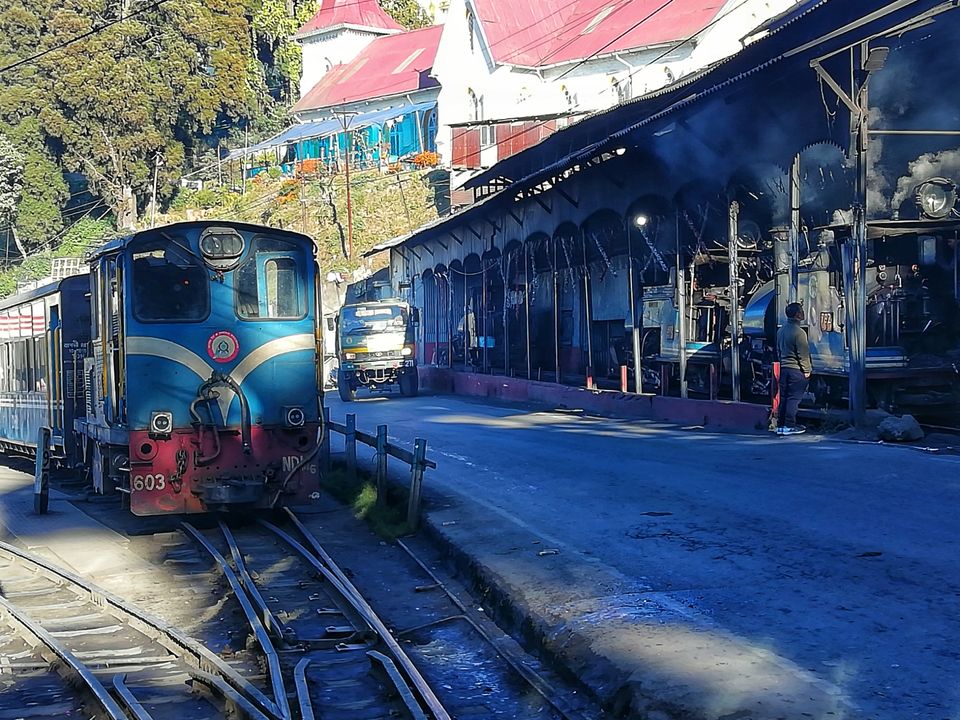 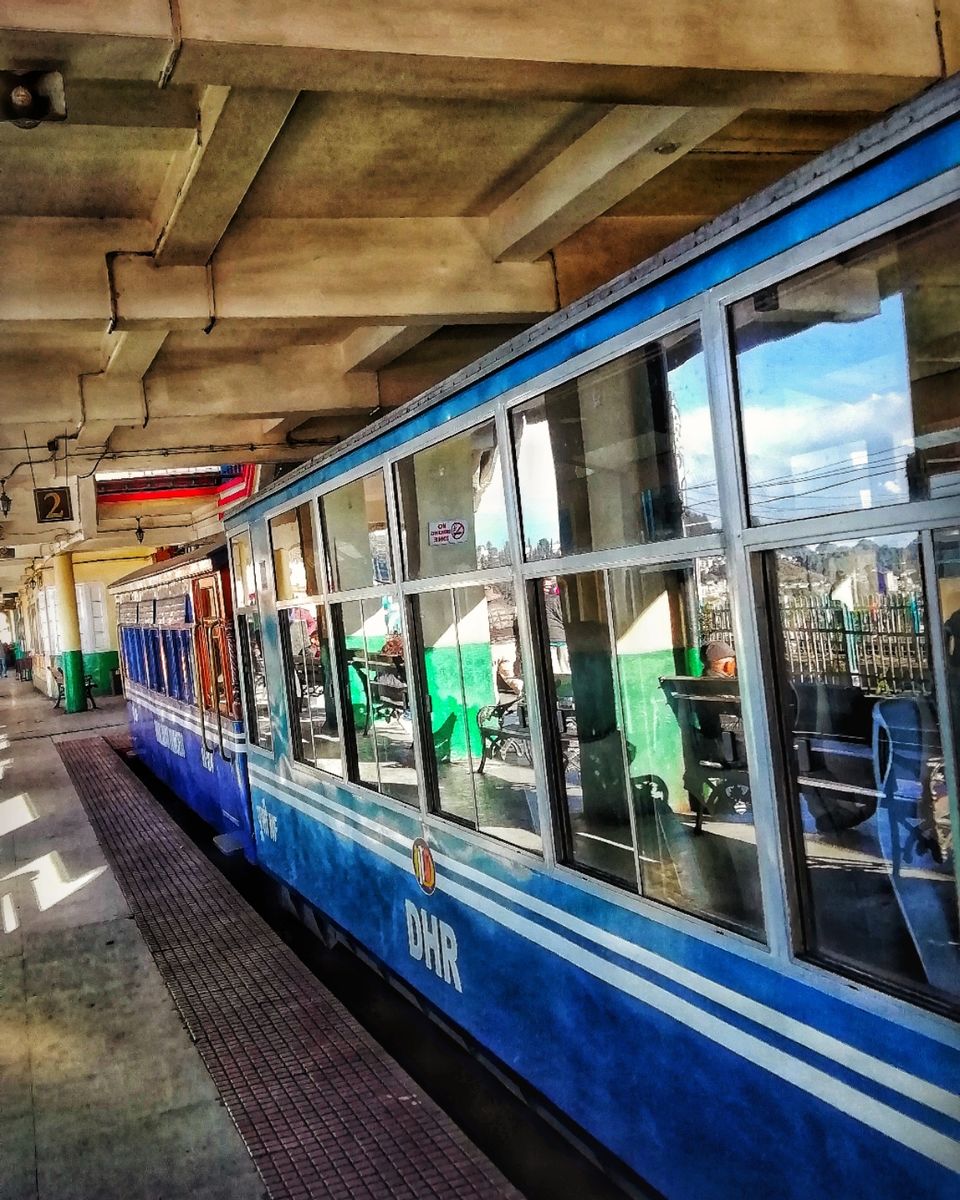 History apart, for a Himalayan traveller, Darjeeling is the gateway to the Eastern Himalayas. The base camp to Sandakphu trek is in this old world paradise, built on imperial interests.

The trek starts from Dhotre, a small village in Darjeeling and a jeep takes you there. On the way, Manebhanjyang comes where the old land rovers stand ready to take you to Sandakphu on an off-road adventure. But for a mountaineer, off road hardly becomes an adventure. Because, thrilling is traversing the mountains, forests and steep slopes on foot, with a packed rucksack! And thus get ready for the 53km long trek from Dhotre!

The winter season has already made the rhododendrons lose all its beauty and stand dry with no leaves and flowers in this chilling weather. The mountains stand ready to receive its first snowfall of the year, and the snow covered Kanchenjunga stands far away as a protector of India at its north.

Before the evening sun hid behind the mountains, we checked in at the Siddhartha lodge at Tumling and the Nepalese calender made me ask the people there, "Are we in India or Nepal?" , and the reply was spontaneous, "Nepal"!

Never would we know when we enter Nepal or India and it is beautiful the mountain trails made the man made boundaries disappear. Were it not for the stone pillar in front of the lodge marking the international boundary, I wouldn't have known I had one of my legs in Nepal and the other in India while sipping the hot tea, with its steam disappearing above the horizon which is scarlet red, perhaps after drinking a bottle of red wine.

The trekking route has many Buddhist inscriptions on the way 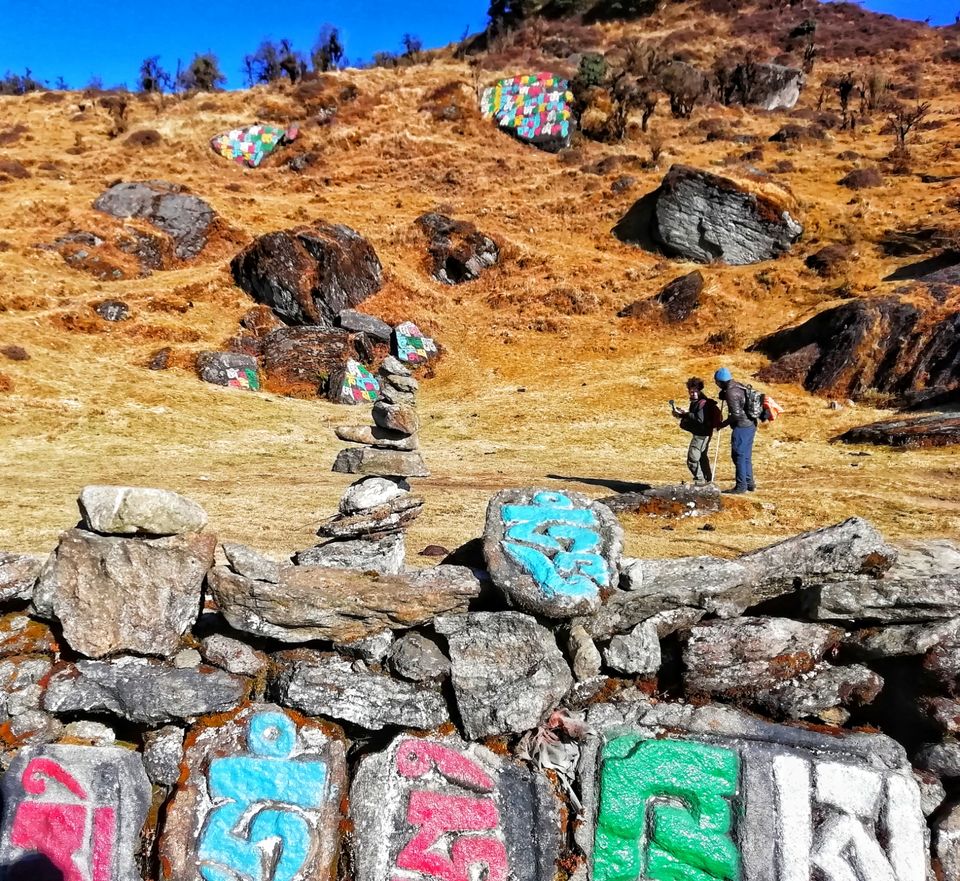 Into the wild, into the mountains! 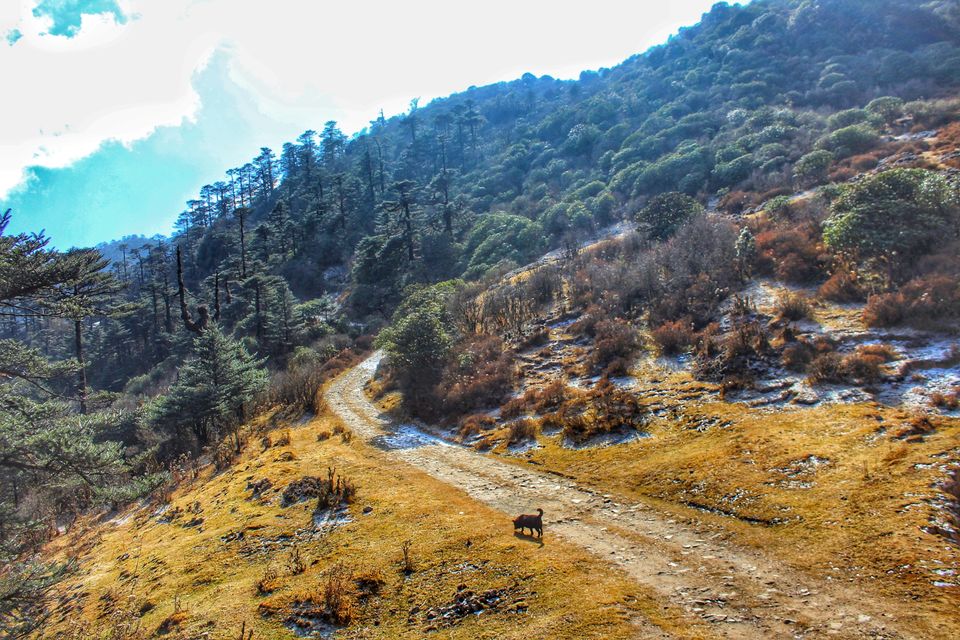 Above the clouds, at Tumling! 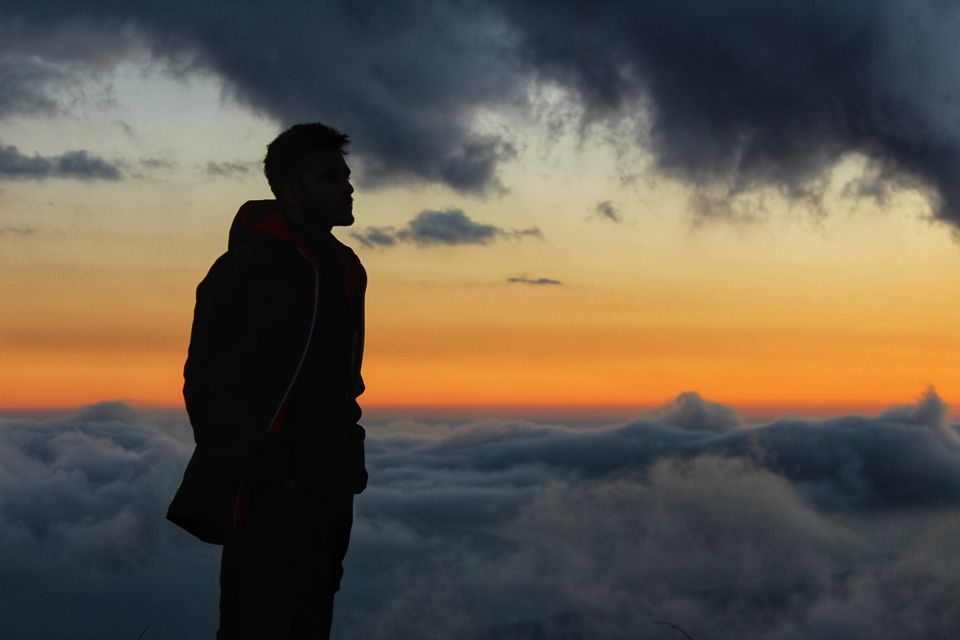 On the right side of the road is Nepal, while the road lies in India! 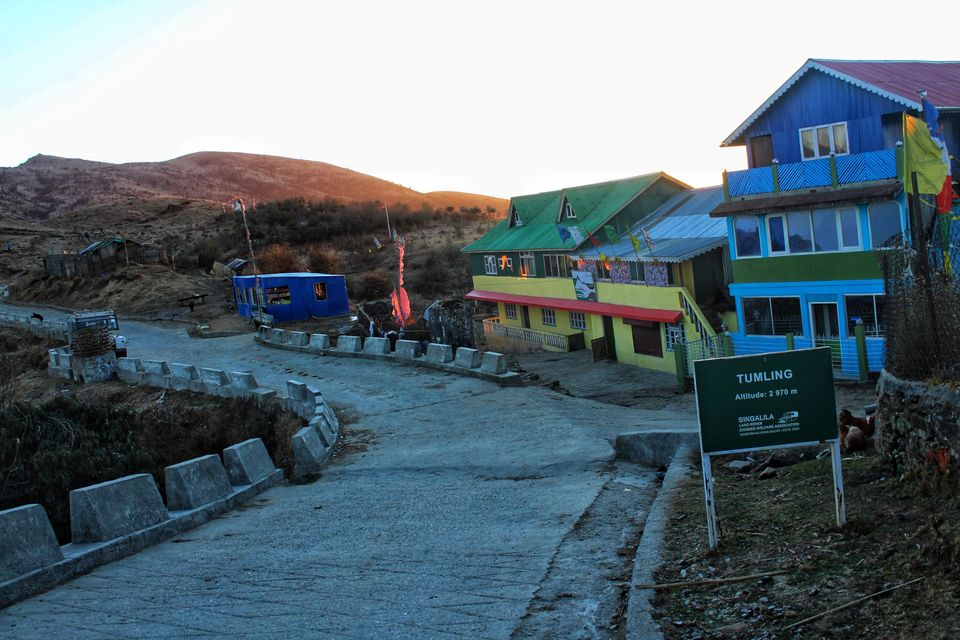 The day started with an effort to stay steady in the heavy cold winds, to witness the sunrise that paints the Kanchenjunga in crimson red. We were out before the sun was, and Kanchenjunga was still far away, and Sandakphu is where it's the closest.

So the trek starts to Kalapokhri, a 16 km stretch where fresh snowfall made the trail pearl white. The temperature dipped as we gained altitude. It was evening and the tiresome day ended with the hopes of reaching Sandakphu the next day!

The crimson red Kanchenjunga as seen from Tumling 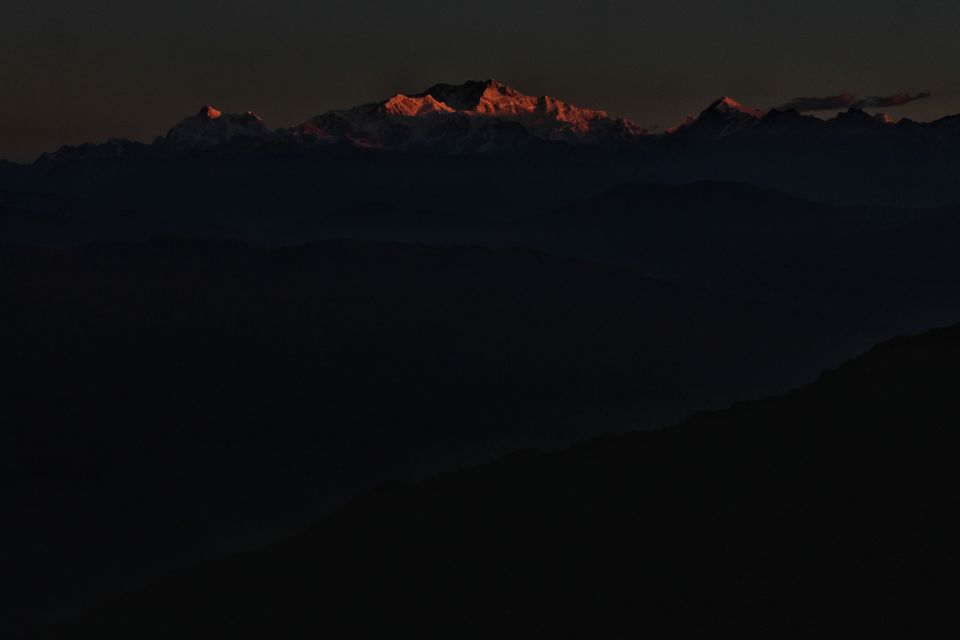 Through those twisting trails, came we! 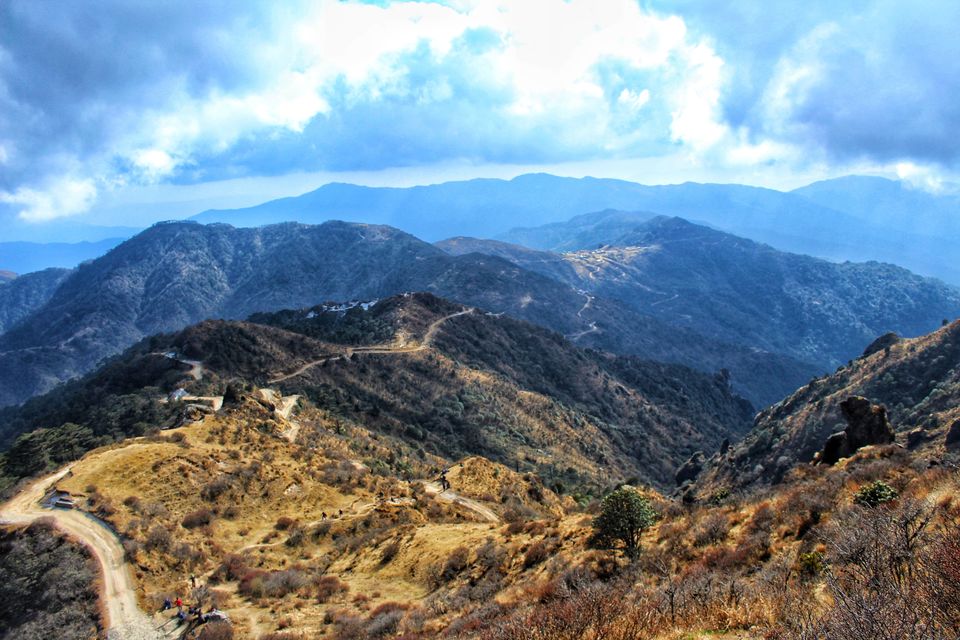 The distance was less, but the steepness wasn't. There were very less people on the route and climate was getting worse. But the magnetism of the destination pulled us up, towards the highest point in West Bengal, on the Indo-Nepal border, where you stand amidst the highest peaks in the world!

Sandakphu has received its first snowfall of the season! 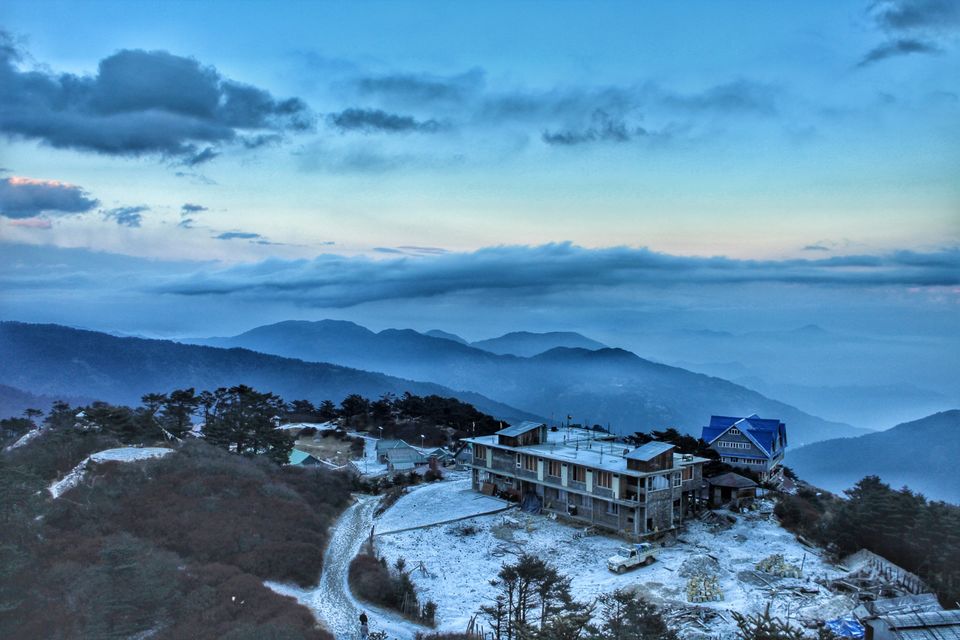 If you dare the freezing cold outside, you can see the magic in the night sky! 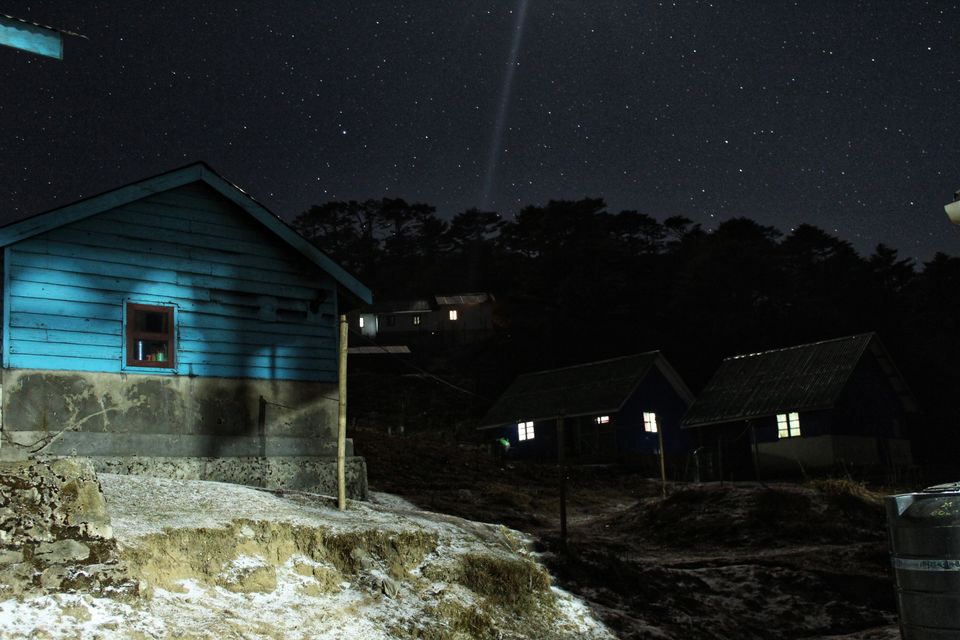 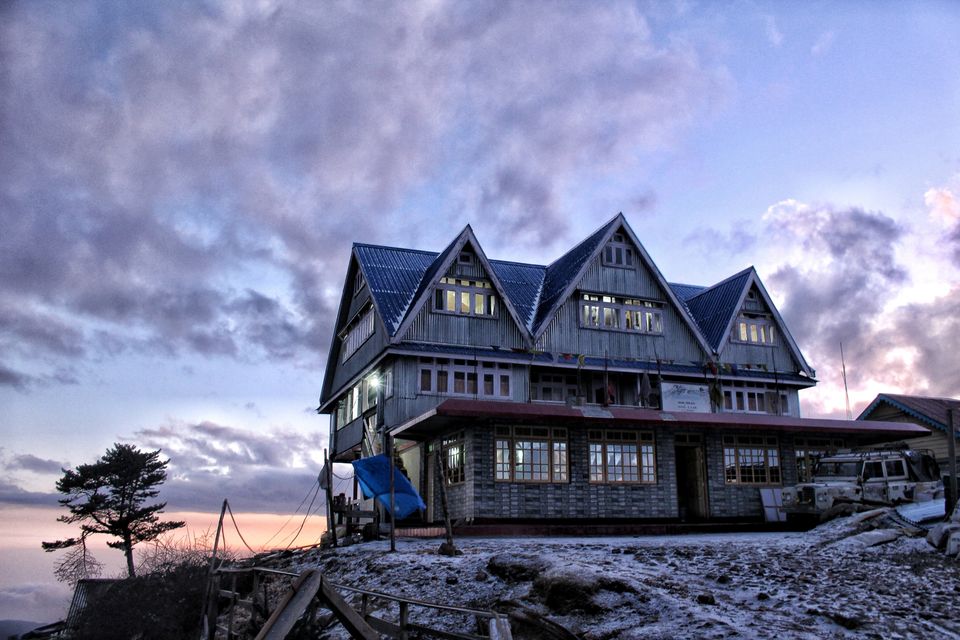 Mists in the sky misted our hopes of viewing the Himalayas the previous day. But again, we set off at 5 am to the nearest cliff to witness what would become the most magnanimous sunrise I have ever seen, because life never dies till our hopes do!

The chilly night has turned all water in Sandakphu to ice and the blowing winds almost froze us. But we couldn't lose the sunrise for anything and so we climbed the cliff and sunlight had not yet kissed the Himalayas.

Soon, the mighty Kanchenjunga began to get a reddish colour, and soon the endless Himalayan ranges began to appear all around. The sunrise lets you understand how fast the earth is rotating on its axis and soon all the mountain peaks from Nepal to India to Bhutan, and extending further to Arunachal Pradesh came into view. The sight was surreal and the "Sleeping Budha" appeared before our eyes, so close that we would feel like touching the peaks! The Kanchenjunga took shower in the golden rays of the sun, and so did all other peaks. You stand there, so little a homo sapien, surrounded by Mt Everest, Kanchenjunga, Lhotse and Makalu, the highest peaks in the globe.

The same mountains have been standing there atop from times immemorial, and will do for thousands of years to come. And for that split second, you realize the sheer insignificance of human egos.

The first sunrays kissing the Kanchenjunga, the highest peak in India! 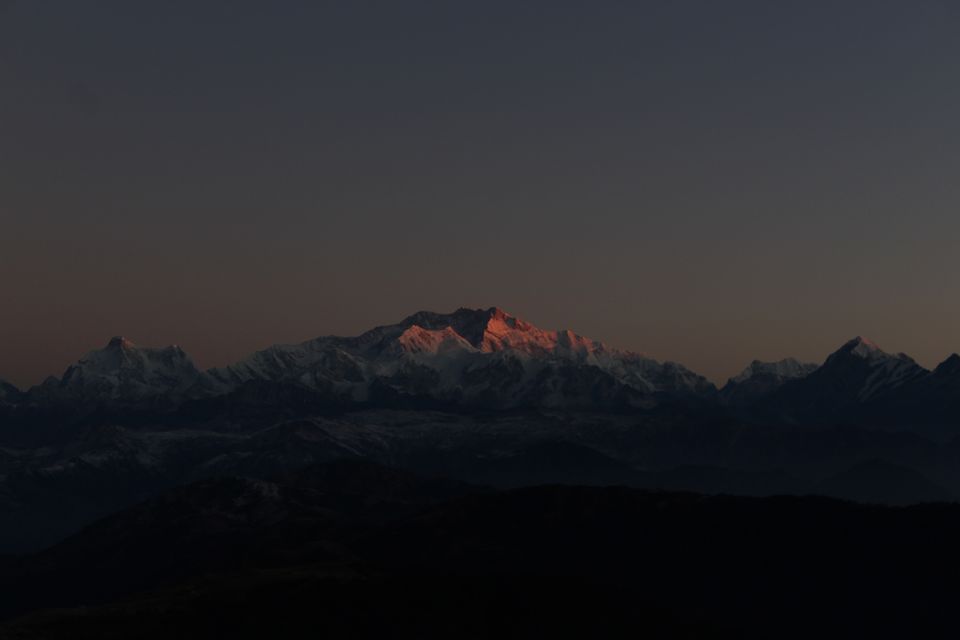 "The sleeping buddha", because the peaks resemble the Budha lying in eternal sleep 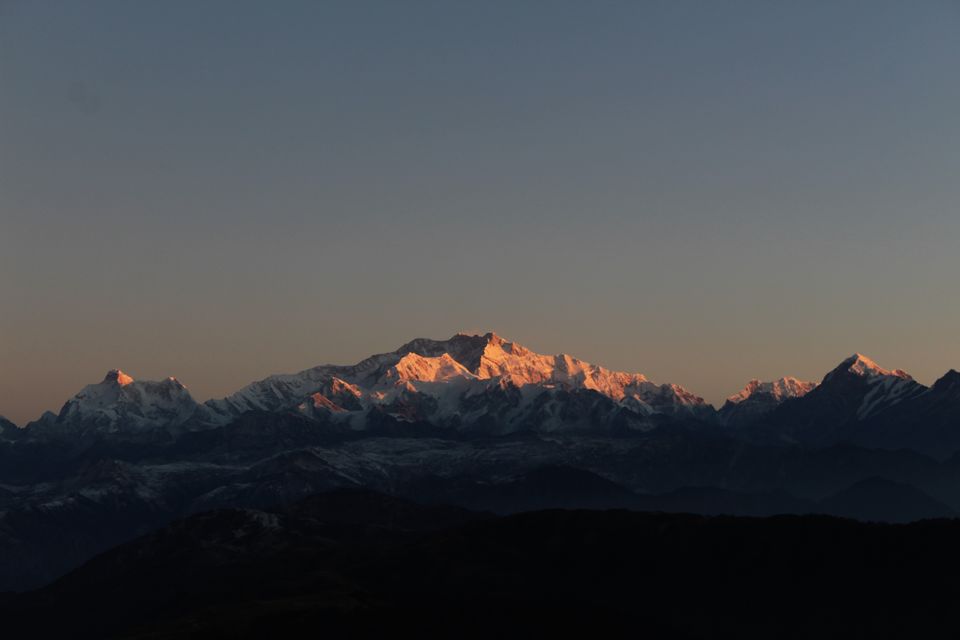 After the sun has risen completely, the mountains become pearl white! 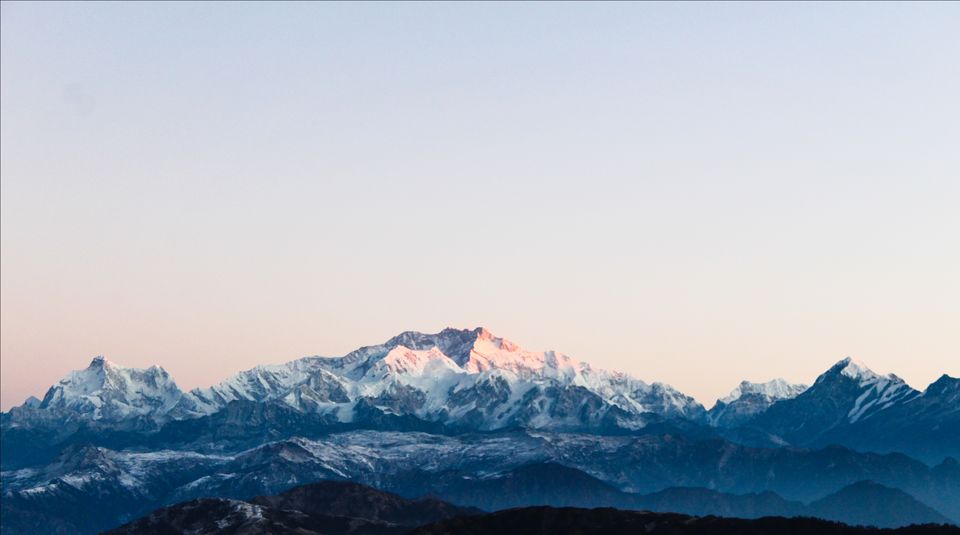 The highest peaks in the world...Mt Everest, Lhotse and Makalu. PS: The third peak from the right is the Mt Everest! 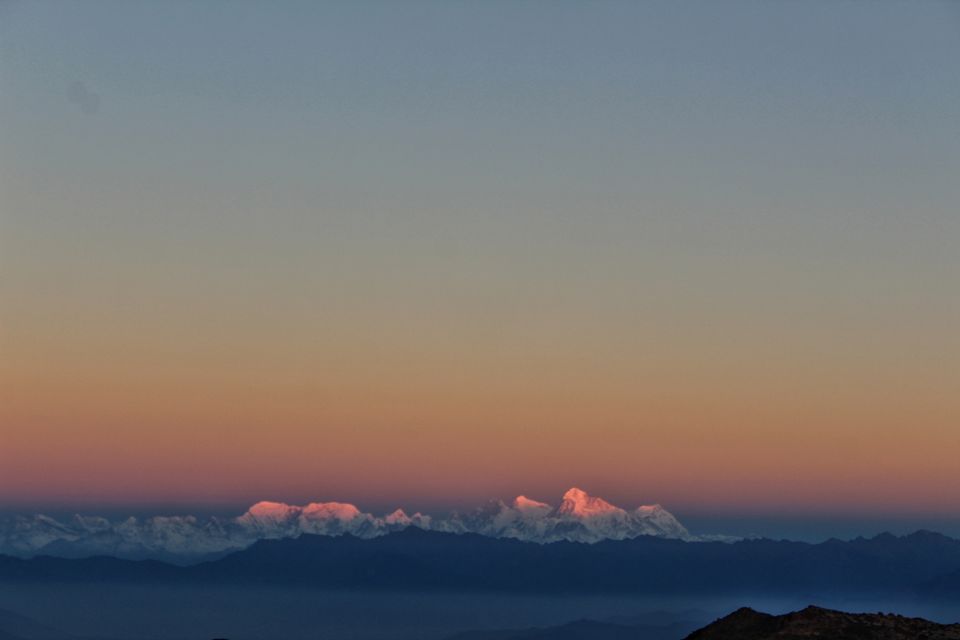 From the highest point in Sandakphu! 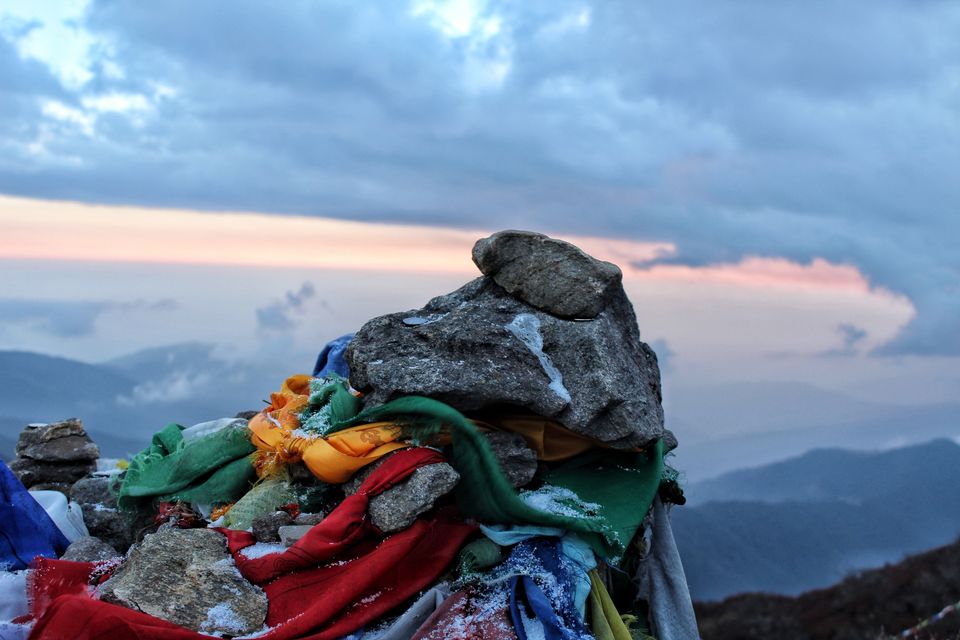 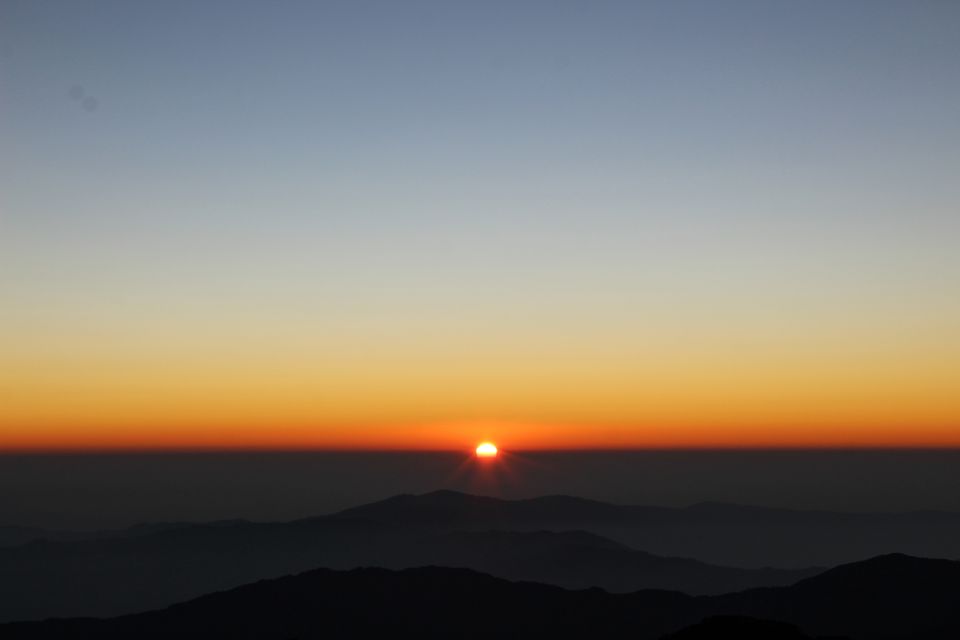 The descend to Darjeeling took two more days with halts at Gurdum and Rimbik. These villages and its people taught me how to live a simple and happy life. Because, they are economically backward, but I am sure they are happy, living their life to the fullest.

Stars and flowers at Gurdum! 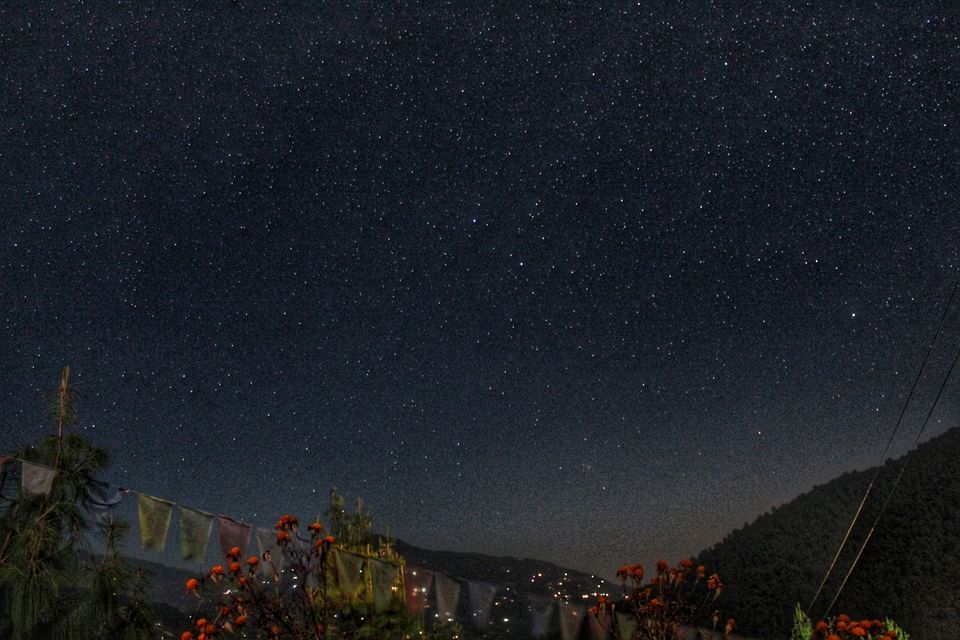 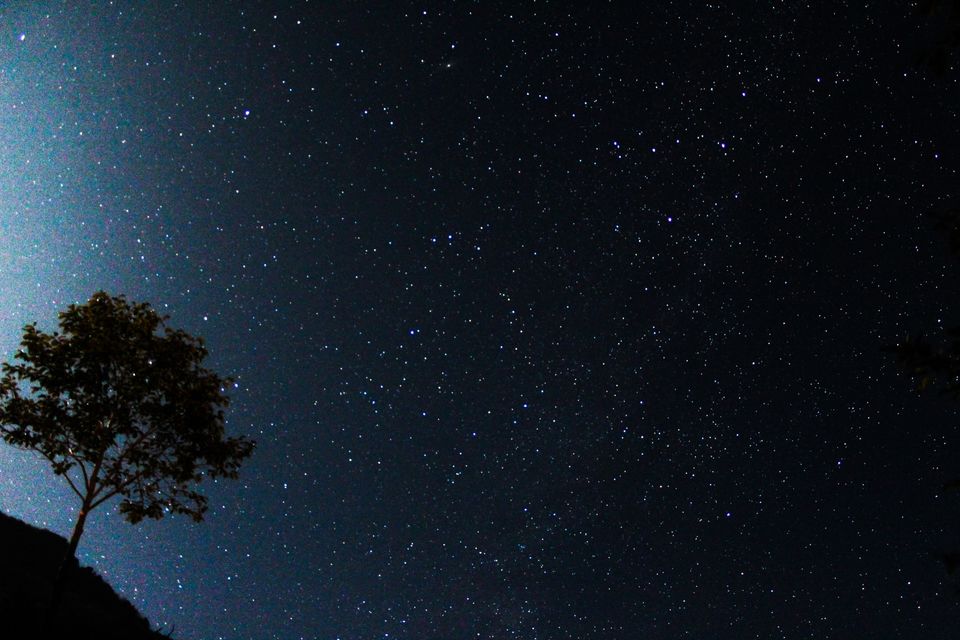 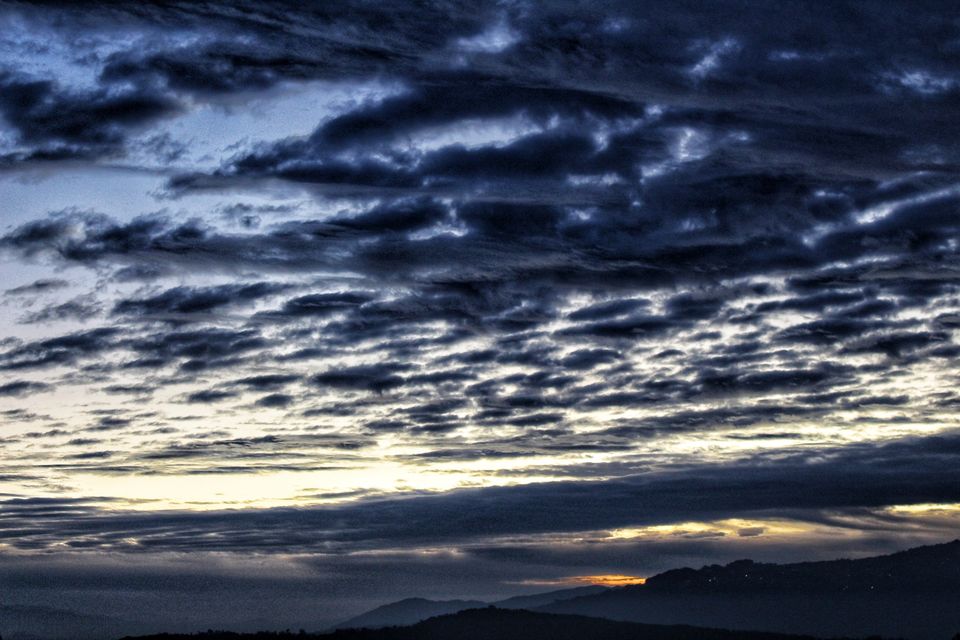 Hope is the best of things! Happy travelling! 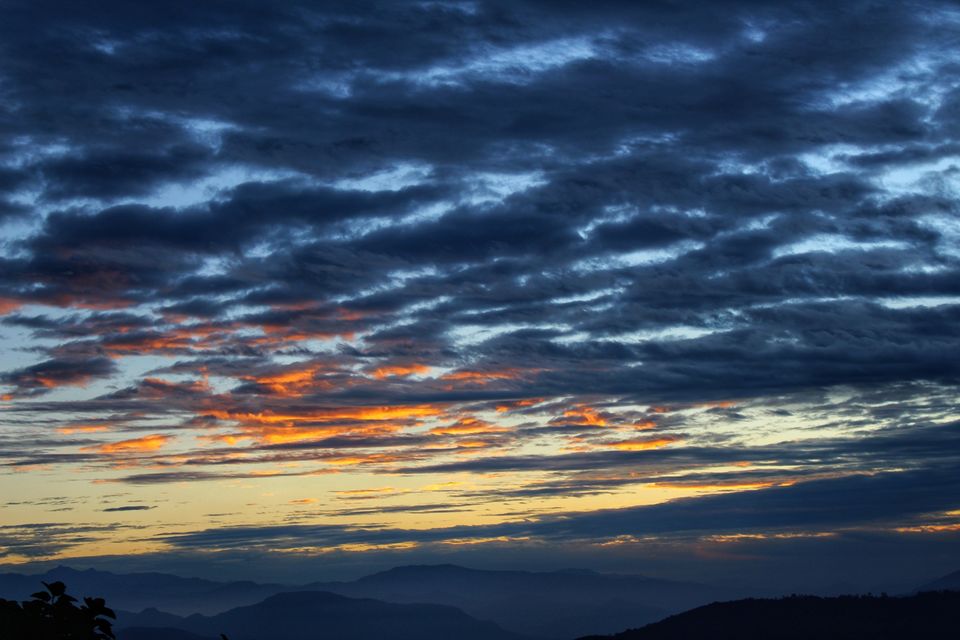 Like this journey, our lives too would end some day, and hope this helps us appreciate every second of it! Happy living, Happy travelling! 😊