A Trip to Ecuador

Ecuador was going to be my first destination in the year 2013. I did my research well before taking the trip and managed to get a very good price on a five-day/four-night trip aboard a first class yacht, the Fragata and found a place called Boutique Hotel Plaza Sucre in old town Quito for a very good price  on the internet. I was extremely nervous about the journey. The actual journey, however , began on January 23, 2013. I took a flight from San Francisco to Houston, then Hoston to Quito, Ecuador. I was so anxious that I couldn't sleep properly the night before and almost forgot to take the passport on journey.The  panoramic view from the flight was refreshing for a change. After being in the air for over 10 hours , I finally reached ' Quito.'
I wandered about town for a while and rain suddenly started to fall in torrents. Somehow I managed to find a restaurant "Hasta la vuelta, Senor.''The restaurant promised authentic Ecuadorian food.The food was good. I ordered an appetizer that turned out to be a deep-fried dough ball stuffed with potatoes and cheese that required a hammer and chisel to open; not particularly tasty, but the small masa corn tamale (all corn, no filling) was delicious with the local beer.

The Hotel Plaza Sucre was charming to say the least. It was bright, quiet, clean, and filled with boldly colored paintings and sculpture. The location in old town was right in the middle of everything. The top-floor restaurant  where breakfast was served offered a view over the rooftops toward the winged Madonna that guards the city. The Madonna, which is visible from most parts of Quito was commissioned in 1976 by a religious order; Spanish artist Agustín de la Herrán Matorras built a 150-foot-tall (45 metres) monument made of seven thousand pieces of aluminum.  The Madonna may be the only one in the world with wings.

As deserted as the streets were at 11:30PM the night before, the next day they were teeming with people, mostly locals. I stood out like a salt shaker in the middle of a plate filled with ground chili pepper.I kept getting the "puta look" from women because of my dress.The old town was a hub of a dozen shops on each building's street floor selling everything from fruit to toys, pinatas to clothing. There were many hawkers wandering the streets who looked like country people .I spent quite a considerable time finding my way around.

I found the Inglesia de Compania, recommended to me by friends in Cuenca, a town two hours by plane to the south. The exterior is ornately carved volcanic stone, but it hardly prepares you for the inside.I've always associated the Catholic Jesuits with a certain level of modesty, a theory blown to hell by this structure built between 1605 and 1745. Just have a look at the pictures above and you'd understand what I mean. St. Peter's has nothing on this as a paean to the dedicated strength of faith of the many hands that created this magnificent structure.

Later in the evening, I went out for a walk to parts I hadn't been to, and my unerring travelwriter instincts led me to what could only be described as a favela--a real shantytown with dirt streets. It didn't look like a good place for little old sweet me (read "target") to hang around, and I didn't think I needed any cd's or computer equipment--which the street businesses were selling at greatly reduced prices--so I turned around and walked back on the "street of schmatas", shops filled with ornate formal wear and other items of South American fashion.

Ecuador has an elaborate system for just about everything, including getting foreigners from Quito to Baltra in the Galapagos, coupled with a near-total lack of information in English and among the airport personnel. I wandered around and around the small national airport without a clue. I ended up in the quite long TAME airline queue. Fortunately, a young man came to the line at the same time to my rescue.The joys of travel; it's a way to test yourself, that's for sure. In the terminal, the flight was late, and TAME personnel kept disappearing. I ended up talking to an Israeli doctor, a woman who was also traveling alone.

Reps from the Yate Fragata picked us up at the airport in Baltra.A jolting bus ride from the military installation brought us to the boat. Before we boarded, we got a taste of what the Galapagos is famous for--a sleeping marine iguana kept guard outside the boat launch and a sassy sea lion posed magnificently for pictures on a bench. Yacht life wasn't quite what I expected. Fragata, a slightly careworn boat whose last refitting was a decade past.The boat took us to Sombrero Chino, a small island south of Is. Santiago, where we went for our first snorkel--the water sparkled with schools of silvery anchovies, and the reefs were populated with all manner of colorful fish: pastel pink and yellow parrotfish, yellow-tailed wrasses, a cobalt blue sea star and much more. It was an excellent dive followed by a short walk among a few sea lions with adorable pups. The sun disappeared into a neon sunset. A few of us gathered on the Fragata's sun deck to watch the last of the golden light darken to shades of gray-blue.

First, we motored all night to Punta Moreno on Is. Isabela, the largest island in the archipelago and our southernmost point, where we hiked into a pa hoe'hoe lava field .Every surface was covered by marine iguanas; it took profound attention to not step on one. We went out on the pangas (motor launches) later to snorkel. The water in the cove we chose was murky, with poor visibility.After lunch, we motored to Punta Espinosa on Fernandina island, the westernmost of the large islands. We walked through a forest of sorts--dry, brush-like trees, some with bright yellow flowers, and a pretty, poisonous .The temperature away from the shore soared as we marched along the dusty trail. In the forest, the twittering of Darwin finches could be heard among the trees. We spotted several tortoises, one so close to the trail we almost had to step over him.
We also encountered a few land iguanas--so different from their marine cousins. One in particular was bright yellow; his diet consisted of yellow flowers from the trees.
There's a lot that happened in the day and the night was taken over by a guy named Fabrizio who was very fervent in his lecture on ecological preservation. The next day we had a scare ; Isabela: the boat was nearly swamped by a big sneaker wave. But we somehow made it and managed to have an eventful day visiting spots like  Punta Tagus and Darwin Lake.The next day we hiked among the beautiful tidepools at Punta Egas on Is. Santiago where we spotted plenty of Galapagos doves, finches, hawks, marine iguanas and sea lions, plus a colony of fur seals.

We awoke to beautiful dawn light illuminating the little town of Puerto Ayora, on the south end of Is. Santa Cruz. We said our farewells to the crew, and after a short panga ride to the dock, made our way through town to the Darwin Research Center. The center is concerned with keeping the varied species of land tortoises and iguanas from extinction; that's already happened on five of the archipelago's islands.The Darwin Center is a pleasant park that provides walkways threading through the grounds; we passed tortoises that were only a few inches in length to massive oldsters (they can live to be around 100 years).We waited in town for a bus that took us through the lush, green highlands to the north part of the island; from there, a short ferry ride brought us back to Baltra and the airport. I met up once again with my Israeli friend, who stayed in Puerto Ayora the week--she had an adventure too, a mini-romance.The flight back was uneventful.Once at the airport, I was unable to check into my next-day flights, so I took one of the airport cabs to my destination, the Galapagos Natural Life Hostel.The next morning I took a taxi to aiport and took the only flight that day from from Quito to Houston and  after waiting for five hours in Houston I finally got to San Fransico. I was exhausted but the first of my adventures was a great success, and I felt elated. I even over-tipped the cab driver. 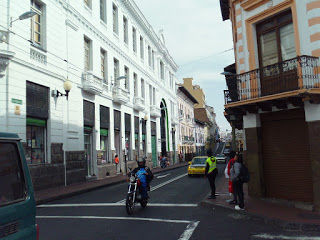 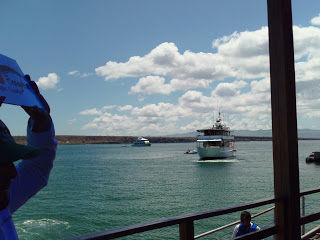 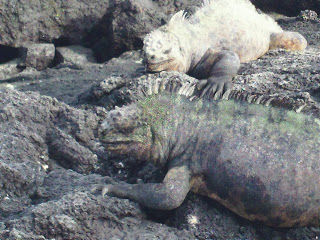 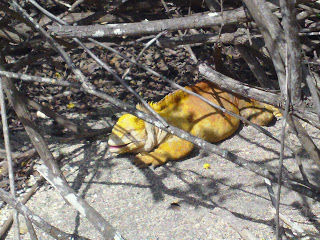 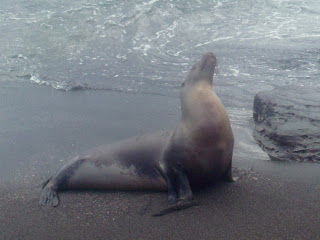 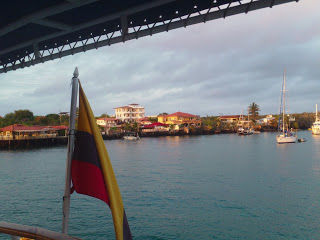