This is our hotel. We would highly recommend it. It is one block off the Cathedral, close to the Malecon, and the area is as safe as it gets in Quayaquil. Plus it's super clean. Fare includes a good buffet-style breakfast and sauna/jacuzzi. One night for 4 people is 75 USD. 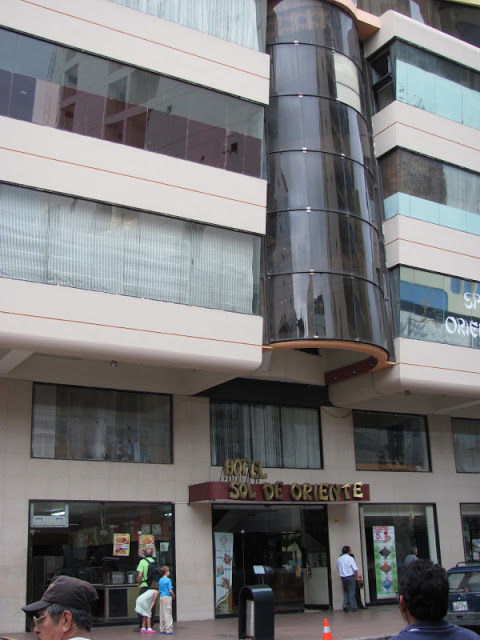 It feels very different from Mexico or Guatemala here. Downtown Guayaquil is a lively place. The "malecon" is a walkway along the river. It is a haven in the city. The gardens along the "malecon" have a wide variety of exotic trees. From this point on the Malecon 2000, it takes only 5-10minutes to walk to the cathedral: There is the statue of Simon Bolivar in front of the cathedral. The "parque de iguanas" is by the cathedral with the statue of Bolicar. They are fed lettuce, cabbage and banana peels. Right on the plaza is a mall. We went to the terminal terrestre to get our bus tickets to Loja tomorrow. It's 10 USD per person and it will take 8-9 hours. This bus station is immense and modern.The bus ride ended up being gruelling. Next time, we'll chose another option for travel. 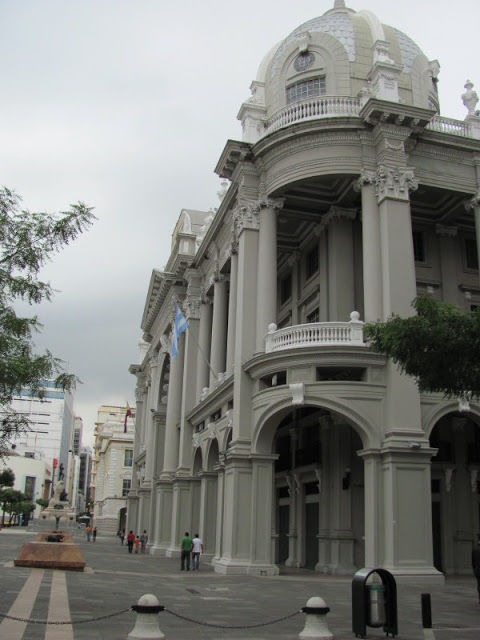 Banana fields are all over the place before the mountains. Upon arriving in Loja right after this grueling bus ride, we set out to find a hotel. All the stores, restaurants and cafes were closed already. The town looked dreary. Our hotel is nice enough. It was close to the municipal market. There are a lot of small eateries (comedores) in the municipal market. Main dishes go for 2.50 USD. There are a couple of nice plazas here too. A few places are cute in Loja, otherwise it is pretty cold and dull looking but we later heard that Loja is a nice town to live in if you do not mind the dreary weather. Loja seems to be a place of culture and classical music. They have a wonderful symphonic orchestra and lots of music teachers. 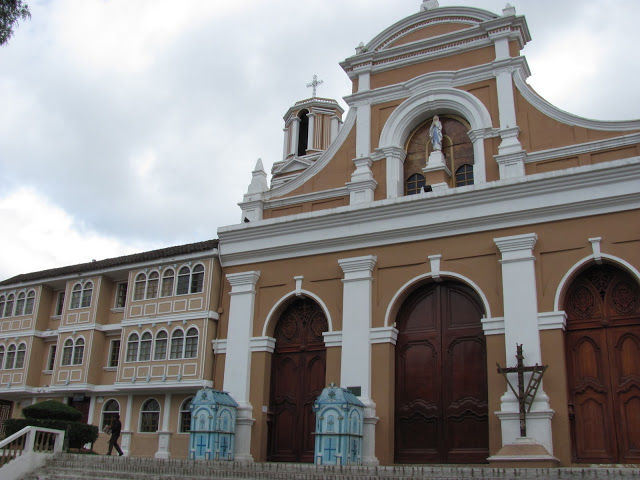 The historical park starts by a boardwalk through a forest of native trees, mangrove, flowers and animals. There was a house that used to be in downtown Guayaquil and belonged to a doctor. They moved it to here in the 1980s to save it from destruction. Same story for another building. It was saved from destruction and rebuilt here. It used to be a hospice for the old and invalid. We attended a comedy show at the farm house in the park. Then there was a theater play in the yard of another colonial house. We spent a nice day here, the atmosphere is relaxed, the entrance is free, the weather hot. The historical park of Guayaquil is indeed a beautiful place. The park is seen from the other side of the Guayas river. 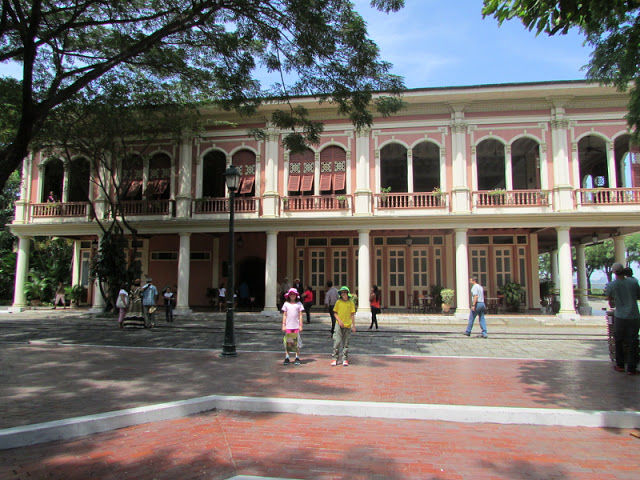 This is what Vilcabamba feels like on week days: tranquil, peaceful, slow pace... Weekends are more busy with young people from Loja coming here and partying until late at night. Someone on the bus from Guayaquil to Loja had asked us if we were going to Vilcabamba. Someone else at the tourist office in Loja told us that it's easy to get to Vilcabamba. We were not even asking about Vilcabamba. So we thought we'd give it a try after two people kind of told us to go there. It's only one hour from Loja. Vilcabamba is in the South of Ecuador, 140 km north of Peru. It is a low valley of the Andes, at only 5000 feet elevation (1500 meters) and the temperatures stay around 70F year-round (20C). It feels and looks much better here than in Loja. Vilcabamba is where the Andes mountains meet the tropics. The spring water here has remarquable healing properties. It is said to be one of the reasons why people live up to 130 years old around here. Which is debatable anyway, is anybody not telling the truth, or do they even know for sure what year they were born? The younger generations do not look that healthy any more and they are exposed to more pollutants, so most probably they will not live to be that old. The central plaza by the church features nice exotic trees and the park is well maintained. It is a very tranquil place. "Es muy tranquilo aqui" We noticed that there is not much art or traditional music around here. Just some jewelry. This is surprising considering that there is so much of it just 40 km south, in Peru. We're wondering why. 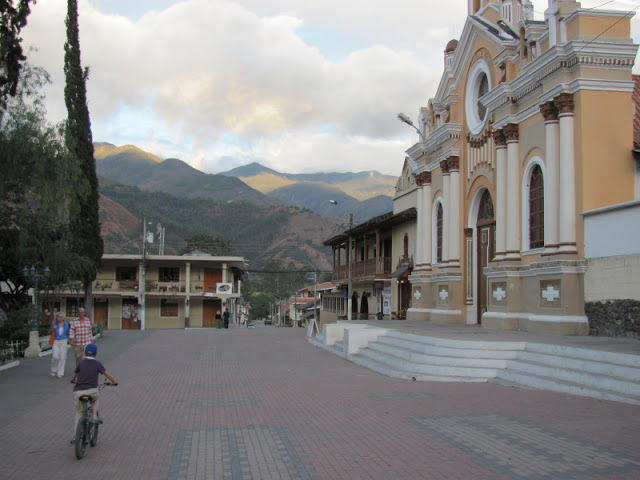 San Pedro de Vilcabamba is a cute village on the side of the hills, a couple miles from Vilcabamba. No gringos here and the locals seem to be more reserved than in Vilcabamba. There are small store s and a few plazas here. Nothing substantial to see, but it gives you the feeling of a small, distant town. 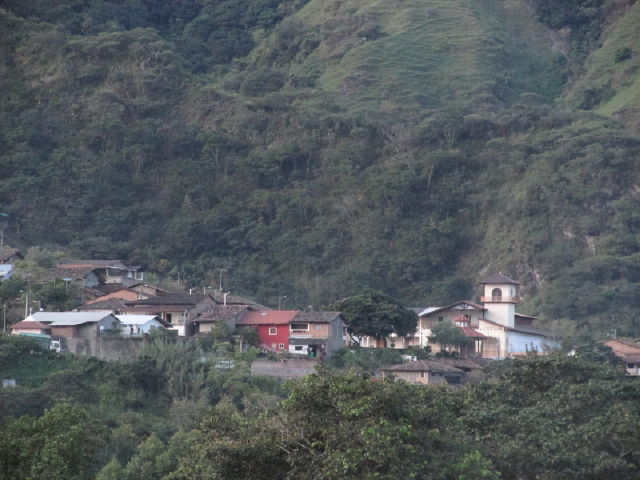 Shanta's is a special restaurant in Vilcabamba. They may have the best pizzas in town, but also other interesting stuff off the beaten path. The garden is a mix of lush exotic plants and cacti. After we had pizza, we had to introduce our friends to Shanta's home made snake liquor. Mike and Sue are from Mancos, Colorado. We all had a thought for Joe Goulet that night since he is the one who introduced us to one another back in Durango. The snake liquor is said to have magical properties and to cure everything. Going to Shanta's is like going to a shaman. Shanta gave us some extra snake liquor and a glass of another mysterious liquor he reserves only for friends, on the house, what an honor! He did not want to say what this last one was. More magic for sure. 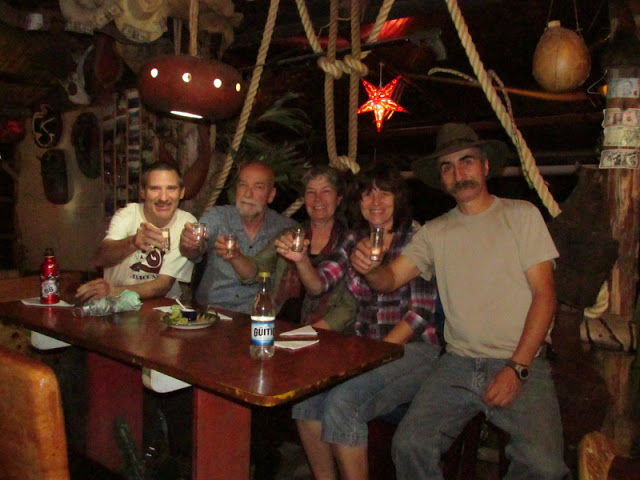 Malacatos is a 15 minute drive from Vilcabamba, on the way to Loja. It is a larger town than Vilcabamba. More and more gringos have been moving from Vilcabamba to Malacatos because it is cheaper and warmer there. We know of two gringos kids who go to the local school in Malacatos. Their parents say that the school is good. It does feel nice in Malacatos. It is definitely an option if someone does not want to be in Loja or Vilcabamba, the first one being too cold, the second one being to expensive. After a fun time here, time to go back home. 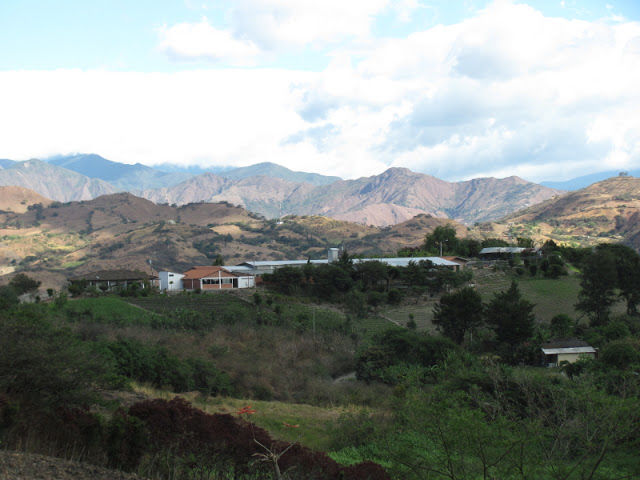