Playing with the waves in Goa 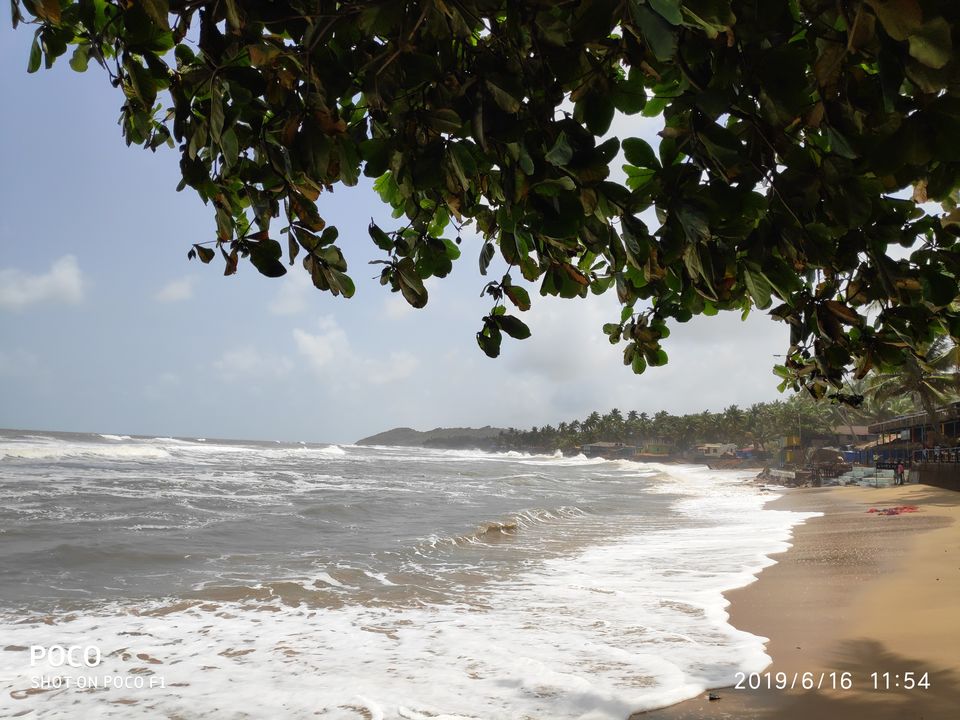 We landed in Goa at 7am. As soon as we came out of the airport, we could feel the heat but Goa is always fun no matter what the weather, time or month it is. We were excited about the adventures that we would have. This was my third time in Goa but it felt like first love, I fell in love with Goa every time. The distance from Dabolim airport to Calangute (where we had booked our resort) was around 40 kms and we decided to take the AC Volvo bus. It took us one hour to reach the resort and the journey was very scenic. Our resort Vila Goesa was located in Calangute and was a beach property. Immediately after checking in, we rushed to the beaches.

It was hot and humid. Although the weather apps had predicted rain and storm, there wasn’t even the remotest signs of rain. After a little walk around, we settled down at one of the beach shacks for lunch. The King fish masala fry was delicious and in no time we had wiped the plates clean (and made the dish cleaners’ job easy). After lunch we roamed around a bit more on the beach taking pictures and selfies, and admiring the beauty around. And by beauty, I mean the natural beauty, hope you don’t start getting ideas.

We went to Baga in the evening. It was very crowded and although I had read that this was off season in Goa, it didn’t seem so. But yes, the crowd was lesser than the usual Goa crowd. We had some delicious food and drinks and took pictures of the amazing sunset. We decided to have dinner early and chose Brittos which is famous for its food. After dinner, we went back to our resort and retired for the day. We had taken the early morning flight and were very exhausted as expected. Our plan was to rent a scooty the next day and make a tour of whole North Goa. Since I was acquainted with Goa, I assumed the responsibility of the tour guide.

We started at 10am. First we went to Curlies at Anjuna beach. It’s one of the best places to eat in Goa. We took a front row seat and gulped down beer as we listened to the sound of the sea and stared into the horizon. Time had stopped, we were staring into the oblivion.

We sat here for a long time after breakfast. Actually we were waiting for lunch time so that we could have the famous Pork ribs. Greedy us. And we did have it. It was delicious and we enjoyed it with the chilled beer. And we told ourselves, only if this could last forever, only if we could live this life always. Far away from work, office and the menace of traffic we had found peace.

The next stop was Chapora fort where the scenes from the famous movie ‘Dil Chahta hai’ was shot. It was well after noon and the sun was spitting out fire. We quickly went up and came back from the fort as the heat was unbearable. We were sweating profusely and needed to hydrate. We rested sometime at one of the shops and had Kokum juice and Coconut water.

The next stop was Morjem beach. We didn’t take the main road and were gifted with beautiful sights of the backwaters which ran alongside the roads of Badem. The journey was blissful and we forgot about the weather and really enjoyed the ride. Being off season, the crowd and hence the traffic was much less, one of the many blessings. Our next stop was Ashvem/Mandrem but as always, I lost the way and we landed at Arambol beach instead after riding around in Ashvem for a long time. It wasn’t much crowded and we stayed here for some time. We returned to our resort at around 5:30pm and quickly jumped into the swimming pool. It was the most relaxing experience. We enjoyed the next hour at the pool drinking beer. Only if this could last forever.

We went out in the evening and had dinner at one of the shacks. The air was cooler now with a soft breeze. We walked on the beaches for a while taking pictures of everything we could. The next day’s plan was to hire a Thar Jeep and drive to South Goa. It was supposed to be a one hour drive with thrilling views. We were excited beyond measure.

We hired an open hood Thar Jeep and started our journey towards South Goa. The drive was a nice one with nice roads and views on the way. To add to our relief, the day was much less hot. Our first place of visit was Basilica of Bom Jesus and Church of St. Francis of Assisi. Both the buildings are beautiful and a must visit in Goa.

Next we started our journey farther south. The winding roads and relatively cooler weather was a bliss. We reached Colva beach at 13:30 hrs. After a walk along the beach and the photography session, we sat down at the Kentuckee restaurant right on the beach. The food was awesome, especially the Goan prawn curry and the Goan roast Pork. We spent an hour or so and then decided to go to the famous food joint Martins corner around 4 kms away. We reached Martins corner in 10 mins but to our dismay it was closed for the afternoon. A little disappointed, we decided to turn back towards Calangute as it was already 4:30. We could not visit Palolem & Cavelossim beach as planned.

After another few minutes of our journey, the car broke down. No matter what I did, it wouldn’t start. We were stranded in the middle of nowhere. As always, there had to be some surprise element in the trip. And as luck would have it, there wasn’t a repair mechanic anywhere nearby. We called the owner and had a long argument. Nobody won but he agreed to help us tow the car to the next available garage. So now, instead of driving the car we sat on the back seats while the towing car took us ahead. They dropped us at a bus stop at Verna. We took the bus till Panaji and from there took an Auto back to our resort. It was 19:30 hrs. Sad and tired we went to our rooms to freshen up. We were too exhausted to go out again. So, we decided to have dinner in our room and watch the India Pakistan World cup match. The staff at the resort were very friendly and the food was excellent. To end the day on a positive note, India had won the match.

We started the day late. After breakfast, went to the beach and jumped into the water. There were high tides and it wasn’t much safe and with the lifeguards strolling around, we couldn’t go out much farther into the waters. After an hour or so at sea, we went back to our rooms. We hired scooters and went out. We had already covered most of North Goa. First place of our visit was Fort Aguada. It is the ruins of a Portuguese fort and is a nice place to sit and relax.

Next, we went to Sinquerim beach. There was a little crowd here and as most other beaches, there were no shacks. During the monsoon season they close down most of the shacks. From here, we went to Candolim beach which was as beautiful as the other beaches. Our last destination were the cliffs near Baga beach. Not many people go there. It’s a very beautiful place where the waves hit the black rocks. It’s also a very good sunset point. With this, we had covered everything in North Goa.

It was almost evening and so we went to have lunch. Our trip was almost over and we had a very lovely experience. We went back to the hotel and dove into the swimming pool for one last time.

The air of Goa is intoxicating and you get addicted to it. There is a certain peace that makes you roam around with careless abandon, with not a worry in the world. Right from the food, the beaches, streets, churches, everything in Goa is worth it and every moment spent weaves into wonderful memories to be cherished forever. Forever in love with Goa.