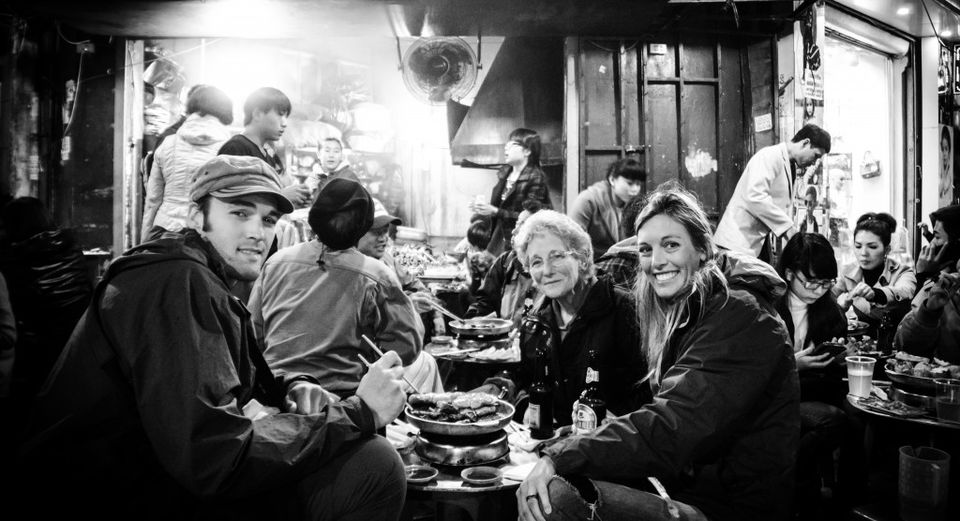 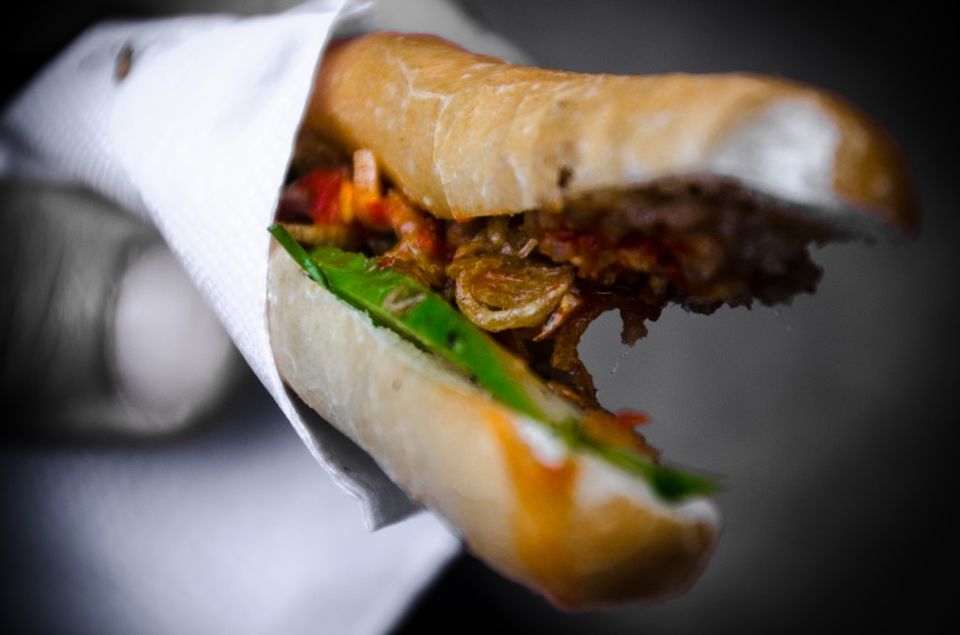 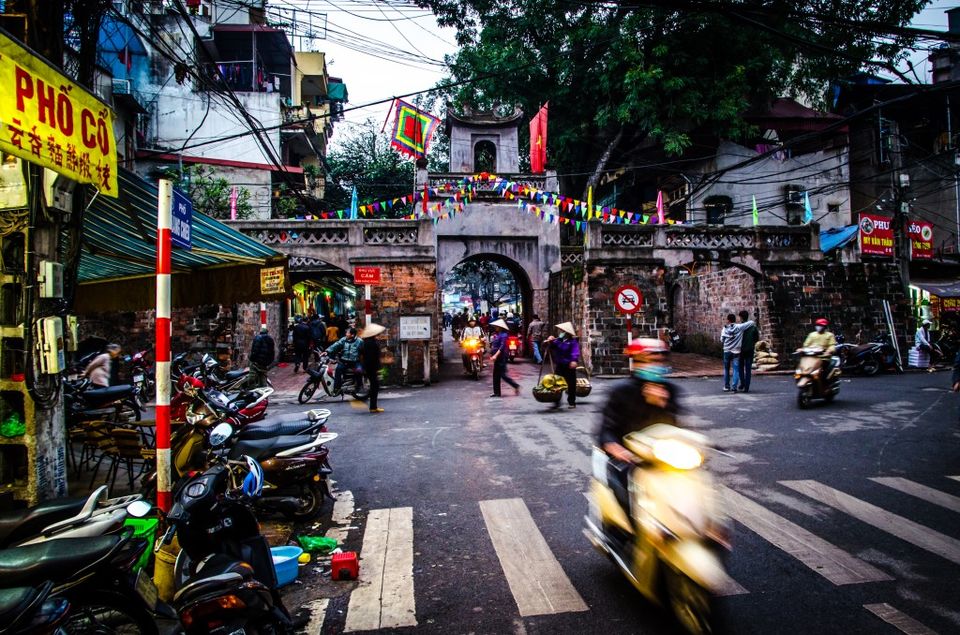 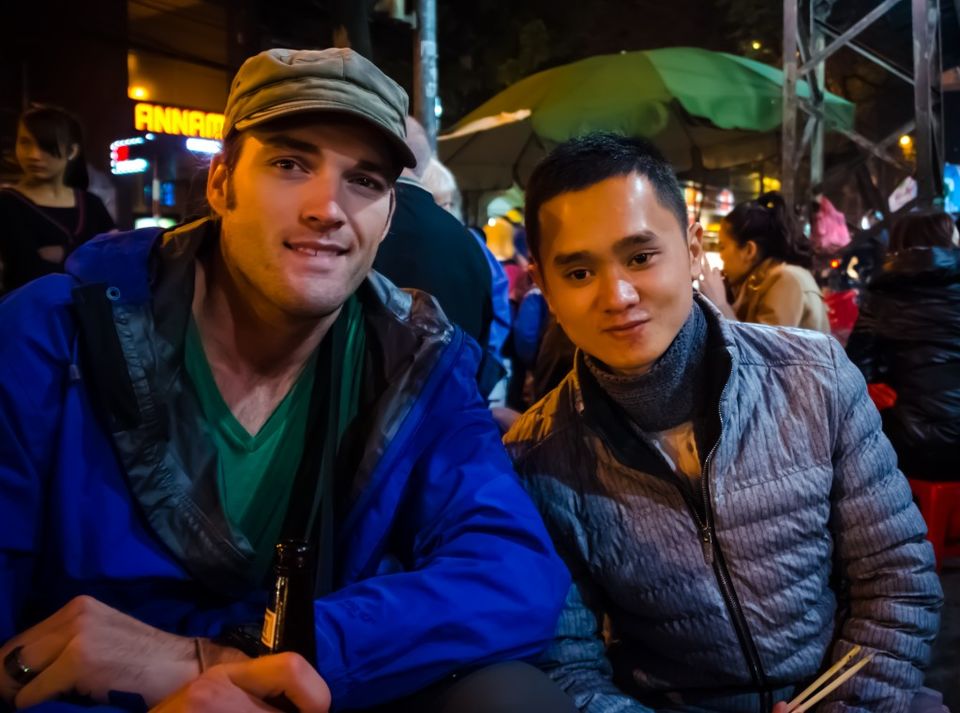 Hanoi was the final stop in Vietnam, we spent just three nights at the end of March. Everyone we met in Vietnam told us how crazy and busy Hanoi was, how it was so much worst than Ho Chi Minh, but we just didn’t think so. Maybe because we were used to Vietnam having been there for nearly a month by time we touched down in Hanoi. We felt the city had a smaller feel to it with narrower roads, shorter buildings, and seemingly less traffic.

The Food – Generally the further north in Vietnam you travel the worse the food gets, that being said there were some different dishes that were only found in Hanoi like Bun Cha and a few others. We went on a great street food walking tour to find all the best ones in Hanoi, which was a great way to find our favorites.

The Bai Hoi or local fresh beer – decent beer for less than $0.40usd

The prices – Just about everything in Vietnam is cheap, especially rooms. You can get a pretty decent room for just $12-15 USD per night with a kings size bed, nice bath room, breakfast, wifi, and even a pool sometimes. We stayed at the Rising Dragon Hotel for around $20 and would stay again.

The historical sites – Every major museum or monument we visited was underwhelming at best.

The motorbikes – Even though they were less crazy than Ho Chi Minh, it was still bad and I was tired of crossing the street.

The Food – Some stuff was good but others lacked flavor and just wasn’t anything that special. What made it worse was coming from the south and specifically Hoi An where the food was really good.

Take the bus to and from the airport. The Noi Bai airport is about 30-45 minutes away from the city and taxis can be expensive (and will more than likely try to scam you). Some airlines, like Jetstar pacific sell their bus ticket on the plane to the city center. The price should be around 40,000 VND.

Try the Bun Cha – this dish is only found in the north and is a soup with nice seasoned pork patties served with a spread of mint, basil, and other vegetables.

The Hanoi Hilton is not what you think it is – There is only a small room pertaining to the Vietnam war, the rest of the building is dedicated to the Vietnamese prisoners kept here during French colonial times.

The Ho Chi Minh Museum is strange – The displays made for the museum are very elaborate and very modern art inspired, which just confused me. I was hoping to learn more about the man who’s face is everywhere in Vietnam, but unfortunately a vast majority of the displays are in Vietnamese and not translated to English. It seems like they took every piece if paper that they could find with his name on it or picture he was in and stuck it on the wall, most of it was not that interesting or really important. I walked out shaking my head and missing that hour of my life.
Would I go back: Maybe

The city itself is fine but there isn’t a ton to do, three days is more than enough to cover everything of interest.

HotelsMap
We stayed at the Rising Dragon Hotel for around $20 and would stay again.

HotelsMap
The Hanoi Hilton is not what you think it is – There is only a small room pertaining to the Vietnam war, the rest of the building is dedicated to the Vietnamese prisoners kept here during French colonial times.